It had been well publicised before this game that Liverpool had not won an away group game in the UEFA Champions League in the last two years. Obviously, that is quite a remarkable statistic considering their recent success in this competition. As they travelled to face Belgian side Genk, there was an expectation that Jurgen Klopp’s side would break this duck. They did so emphatically, winning 4-1, and importantly ensured they stayed only one point behind group leaders, Napoli.

This tactical analysis delves into the tactics used by both Liverpool and Genk from Wednesday night’s Champions League group stage fixture. 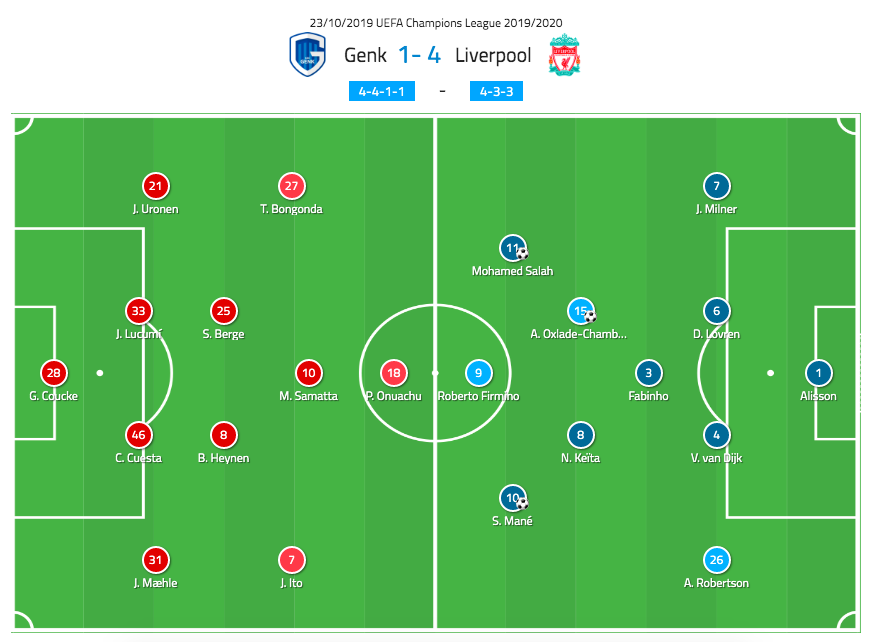 Liverpool fielded a 4-3-3 formation as expected. However, due to Trent Alexander-Arnold being unavailable due to an illness, James Milner came in at right-back. This was surprising, with most predicting that it would be Joe Gomez slotting into this position. Klopp went with Naby Keita alongside Alex Oxlade-Chamberlain in the middle, with Fabinho behind them. Dejan Lovren came in at centre-back for the injured Joël Matip.

Genk went with a more defensive-minded 4-4-1-1 rather than their usual 4-2-3-1. Mbwana Samatta, who normally plays as a lone striker, dropped into the 10 role, whilst Paul Onuachu was given the nod to play in front of him. This set up provided Genk’s attack with plenty of pace.

It was quite remarkable that Liverpool scored four goals, and none of these came from corners. This is surprising because Genk marked so appallingly from corners that on another evening Liverpool could have scored several from such situations, and would have put the game out of sight from the hosts within the first 30 minutes.

Genk dropped all of their players back for corners and we can see their system in the analysis above. Liverpool have six players, in the Genk 18-yard box with five clustered together in line with the middle of the goal and the back-post, as well as Salah occupying the centre of the six-yard box.

Genk have placed a player on both near and far post. They have one player dropping to ensure there is not short pass played, and another marking the edge of the area. The rest seemed to be positioned in a zonal set up which we can easily identify by looking at the stagger and positioning of these players. There are notably three players positioned at the near post. One of these players remained where they were, whilst the rest of the players in their zonal marking system appeared to all attack the ball at once. This created chaos and left Liverpool players wide open in the box.

As the ball was played in, Liverpool consistently had at least two players left unmarked standing by the back post. On one occasion it fell to an unmarked Salah who should have scored, and on several other occasions it looked as if a Liverpool knockdown, or a mistimed Genk header would lead to one of Liverpool’s free players inside the box being gifted an easy goal.

Where Liverpool struggled and succeeded in attack

Liverpool were less dangerous from wider areas and their crossing game never really got going. This is partly down to missing Alexander-Arnold, however, although Robertson worked as tirelessly as ever down the left-flank to provide width in attack, and create space for his front three, he lacked quality with his delivery. It is telling that Robertson made more crosses than any other Liverpool player, but was unsuccessful with every attempt. However, he wasn’t alone. Sadio Mané and Mohamed Salah combined for five crosses between them, and were also unable to find a teammate with their efforts either. Robertson would be disappointed to not have reached his man with at least one cross. Liverpool ended the game with a below-par 23.5% cross accuracy rating.

Liverpool’s left flank was by far their least used area of attack, and on their seven positional attacks from this area, they managed only a 0.01xG.

What the likes of Salah and Mané lacked in crossing quality though, they more than made up for with sharp movement that put Genk’s defence to the sword on a number of occasions. The swiftness and intricacy of their movement only pales in comparison to how synchronized Liverpool’s front three are with one another. When one of them either receives or makes a run, they are so well coordinated as a unit that they know their next move instantly, knowing where the other two of their front three will be.

Their link-up play for Liverpool’s third goal of the evening highlighted these qualities, with it all starting from Roberto Firmino’s movement. Starting between the lines, he made an untracked run into the right half-space behind the Genk left-back Jere Uronen, where Genk’s left centre-back, John Lucumí, was forced to engage the Brazilian.

In doing so this freed up Salah, who ensured to take a position far away enough from both centre-backs to receive, but also to ensure he would bring in Genk’s other centre-back. Firmino seemingly instantly knew Salah would be in this position and would be free to receive, as he found his teammate without having to look up, with a quick pass.

Following these events, Mané was able to move from his position in the left halfspace forwards as Genk’s right centre-back, Carlos Cuesta, moved over to engage Salah. With the ball played into his path he was able to slot the ball past the keeper and put Genk out of sight.

Genk struggled throughout the evening to prevent Liverpool’s attacking players finding space in between the lines, and in the halfspaces.

Oxlade-Chamberlain’s first goal of the evening came from exactly this, as the midfielder found himself with no defenders within five yards of him, despite being within 20 yards of the Genk goal. He slotted home impressively and would perform an even more magnificent feat for his second goal of the game.

It’s been widely documented how Liverpool’s front three is more like a front two, with Firmino dropping deeper. He works as a link between Liverpool’s midfield and their forwards and ensures the creative burden doesn’t fall on the likes of Henderson and Wijnaldum from central areas.

Although Firmino will often take positions centrally between Salah and Mané as a front three, he will drop deep into space to receive and orchestrate attacks. We can see this below as he leaves his centre-back marker to receive in space between Genk’s central midfield pair.

He looked to do this throughout the game, and is so quick to turn and distribute, he is the perfect foil for pacy forwards like Mané and Salah. As he receives the ball he is able to thread the ball through the space from which he has just vacated, behind the opposition defence and into one of his two forward teammates. 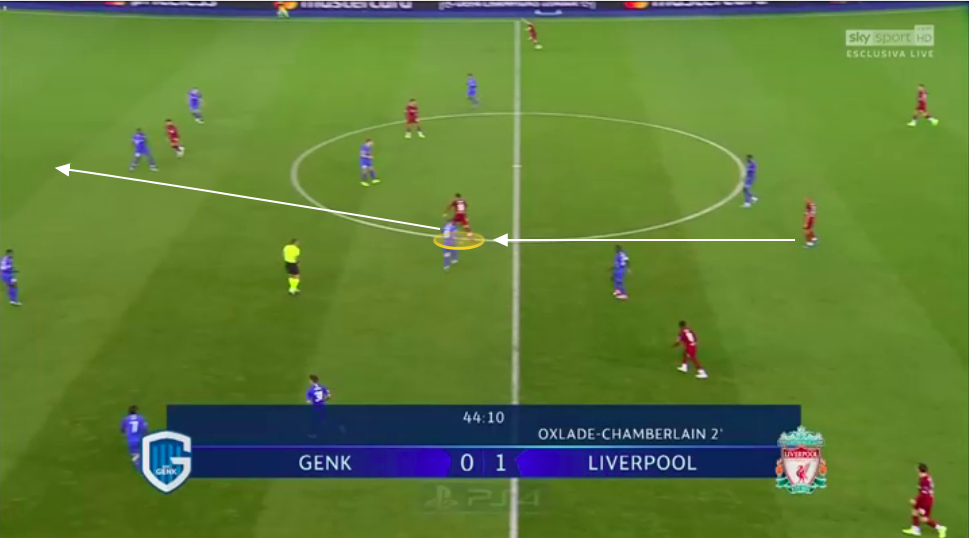 Firmino is given license to move across the pitch along the forward line, and create his own space to run into. The positioning of Mané here means that Genk’s centre-back doesn’t push too tight to his partner. However, in doing so this leaves space for Firmino to infiltrate. The analysis below shows the beginning of one of the best moves of the game, that had Liverpool scored would have been one of the goals of the competition. 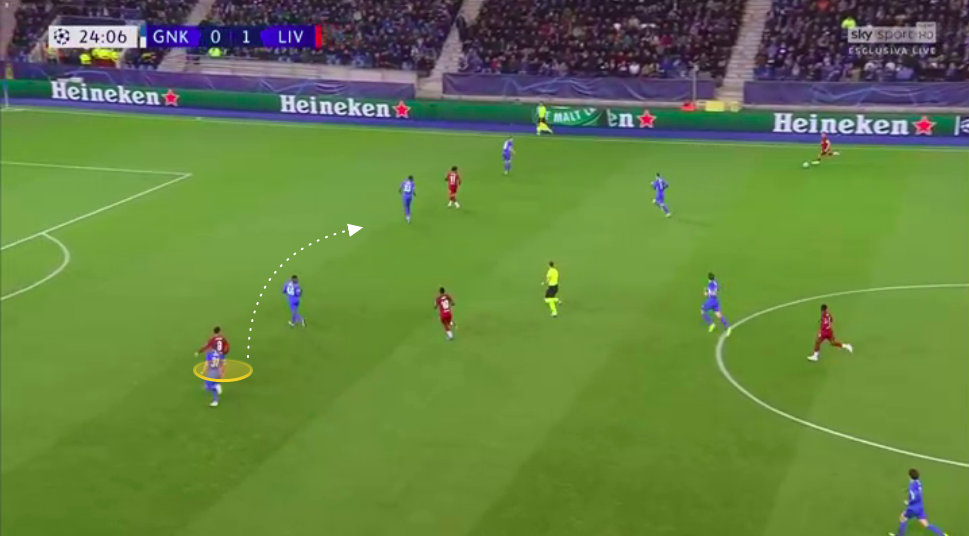 As Firmino moved over into space, it pulled Genk’s defence out of position and allowed him space to play a succession of quick interchanges with Mané, that ended with Firmino playing a rabona through-ball through to Mané, who was denied by the goalkeeper. These passes were made possible due to Firmino and Mané’s interweaving runs, where Genk’s defence were unable to get close enough to them to dispossess them, concerned more about leaving space behind them. 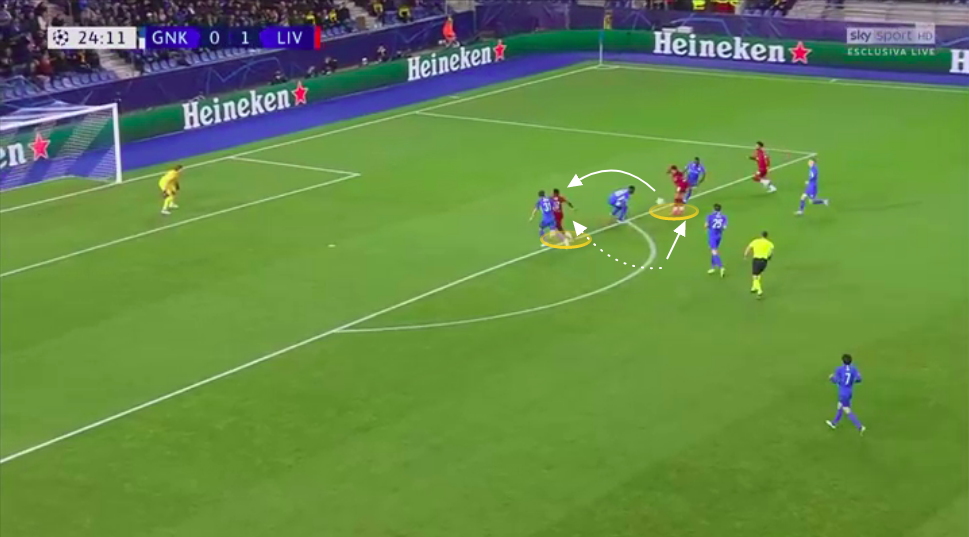 Firmino’s passing is one of the most underrated aspects of the Brazilian’s game, and when he takes deeper positions in the half-spaces like below, he is able to pick teams apart with purposeful passing, threading the ball through the eye of the needle. He completed 90% of his passing in the game, only misplacing one pass into the final third, and completing 100% of his passes into the opposition box, showing that these statistics are not padded through sideways or backwards passes.

Genk focused a lot of their positional attacks down the wings, particularly targetting Milner.

They enjoyed little success though, and only completed three of their 14 attempted crosses on the night and struggled to maintain possession in wide areas. Liverpool’s 4.56 PPDA showed their desire to win the ball back as quickly as possible and was in fact statistically their most intense pressing performance as a side this season.

Genk looked to play down the flanks rather than try to break down Liverpool’s midfield three centrally. However, Klopp’s midfield three worked in tandem beautifully to move across the pitch as a unit and prevent Genk’s wide players from having a free-run at Liverpool’s full-backs.

Genk were instead more successful in creating chances playing the long ball, looking to exploit Lovren, who looked short of match sharpness over the course of the game.

Genk played with two quick forwards who started from deeper, and rather than looking to receive in between the lines, instead turned and sprinted past Liverpool’s backline as the long pass was made. 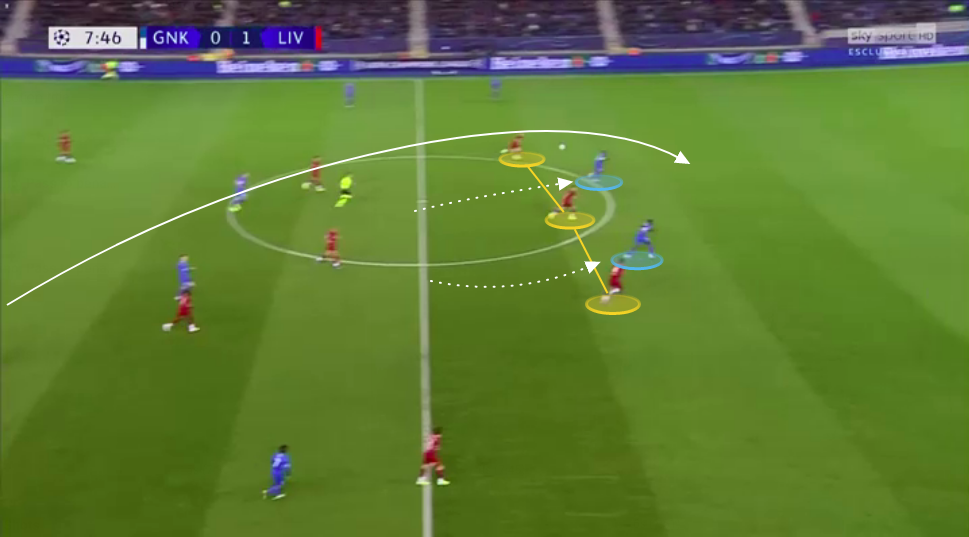 In the first ten minutes this happened twice and had Genk’s forwards possessed more composure, Liverpool would possibly have conceded. However, this wasn’t the case.

Interestingly, Klopp’s side began without staying deep as a backline and this nearly led to them being caught out from a similar type of ball. Both Sammatta and Onuocha possessed the requisite pace to cause Liverpool problems and it was surprising to see such a far forward backline from the visitors. 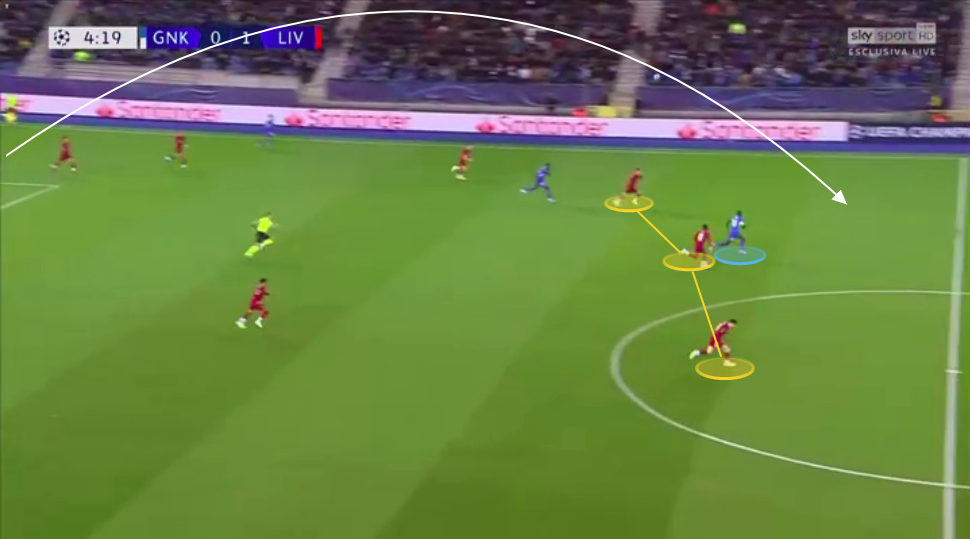 Lovren was at fault for Genk’s goal, where he should have just put the ball out, rather than trying to play his way out of a tight angle without support, and with his back to oncoming pressure from Genk’s forwards. Genk dispossessed him and scored. Yet Lovren’s lack of match sharpness was most obvious with his marking, giving far too much space to Genk’s Dieumerci Ndongala. Had Ndongala had a better touch rather than allowing the ball to rise sharply off his foot and have to attempt an overhead, he would surely have scored from such close range. Lovren sat a little too deep from him, and a simple two-yard burst away from the Croatian led to the forward finding himself in five yards of space with the ball well inside Liverpool’s 18-yard box.

Liverpool played an open game, and against a better side, this result would perhaps have been closer. However, the class of Liverpool’s front three was evident for anyone to see, and Genk’s defence will not be the last European side to be carved apart by this special group of players. Genk put in a brave performance, and had their chances, but were well beaten.

It was an important win for Klopp’s side, not solely to rid themselves of unwanted attention on their European away form, but to keep the pressure on the group leaders, Napoli. With Liverpool’s next two home games in the Champions League being Genk and Napoli, Klopp will see an opportunity to seize control of the group at the right time.