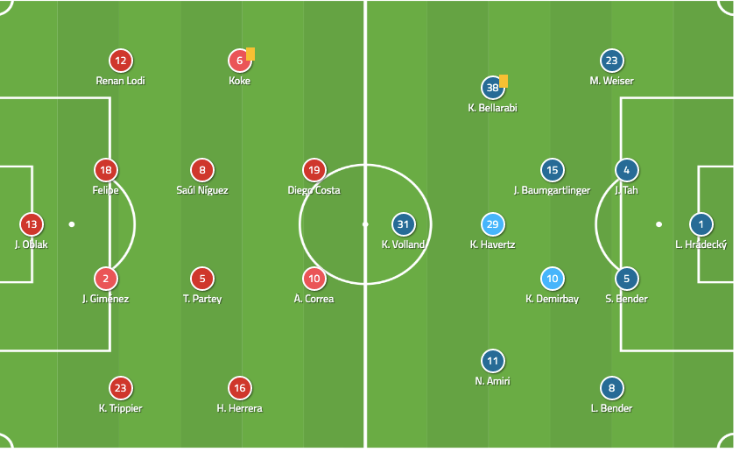 Atletico Madrid lined up in their familiar 4-1-2-1 diamond/ 4-4-2. Kieran Trippier and Renan Lodi played as the full-backs on either side of José Giménez and Felipe. In midfield, Thomas Partey was the deepest midfielder with Hector Herrera and Koke ahead of him. Saúl played at the tip of the diamond, while Diego Costa and Ángel Correa led the attack.

Bayer Leverkusen lined up in an attack-minded 4-4-2. Mitchell Weiser and Lars Bender played as the full-backs with Sven Bender and Jonathan Tah in defence. Julian Baumgartlinger and Kerem Demirbay played together in central midfield. Karim Bellarabi and Nadiem Amiri played on the flanks with Kai Havertz operating as a second striker behind Kevin Volland.

Leverkusen were aggressive from the whistle as they sought to press the home side. Leverkusen’s formation was perfect to exploit Atletico’s weaknesses, especially on the flanks.

Due to Atletico’s diamond, they lacked players on the flanks which left only Trippier and Lodi to provide the width. Leverkusen pounced on this to create numerical superiority on the wings and cause issues for the Atletico Madrid full-backs. This was especially seen on Atletico’s right flank as Trippier was unable to deal with Amiri and Havertz who had taken up a wider position. In the initial stages, the majority of Leverkusen’s attacks came from the left-side and they ought to have been more clinical with their chances. Despite Leverkusen’s initial forays, Atletico’s centre-backs defended well, making numerous clearances and tackles.

The other aspect of Leverkusen’s tactics was to prevent Partey from having any time on the ball. Partey is very much the metronome of Atletico Madrid’s midfield and the Ghanaian struggled to influence the game for the first half. His impact was seen only when Leverkusen grew weary from their pressing and gave him more space. Bayer Leverkusen were also employing an extremely high defensive line to aid their front-footed approach but they also used the offside trap well to deal with Costa and Correira. Unfortunately, despite their positive start, the visitors were unable to find the net despite an array of decent chances.

Diego Simeone was forced to adjust his formation due to Bayer Leverkusen’s width. This led to Atletico mirroring the opposition’s 4-4-2. Saul and Koke were asked to operate a bit wider, assisting Trippier and Lodi respectively while Herrera was also tasked with dealing with Leverkusen’s growing threat on their left-flank. As a result of this tactical change, Simeone’s side were able to reduce the effectiveness of Leverkusen’s primary tactic and gained more control of the match.

The second half saw Atletico Madrid have more control, not just in terms of possession but also in forcing Leverkusen into less-threatening areas. The home side also looked less flustered on the ball. This can also be attributed to Leverkusen’s fatigue after their pressing for the first 45 minutes. However, Atletico still struggled to find space in the central areas with Leverkusen maintaining their shape and positioning. Atletico’s primary outlet were the full-backs who crossed the ball heavily for either Diego Costa or Correa. Due to the inefficacy of Koke and Correa, the duo were replaced by Thomas Lemar and Álvaro Morata.

These two changes consequentially brought more impetus to Atletico’s attack. Lemar was expected to take his position on the left flank but instead tucked inside, playing more centrally – this enabled Atletico to have numerical superiority in the centre of the pitch. Considering Demirbay’s attacking-nature, Leverkusen had only Baumgartlinger to deal with Lemar, Saúl, and Herrera which forced them to be more cautious while attacking.

Interestingly, Atletico were the side with less possession of the ball, having just 40% of the possession. They were also outshot by the visitors, with Leverkusen recording 12 shots to Atletico’s six. However, Atletico were more clinical, scoring from one of their two shots on target and Bayer failing to score from their singular shot on target.

This tactical tweak on Simeone’s part proved to make the difference. Because Lemar was not shifting to the flank too much, Leverkusen’s full-back Weiser maintained a higher line due to the perceived lack of threat. This allowed Renan Lodi, Atletico’s left-back, to discretely find space behind Weiser and cross the ball for Morata’s winning goal. As Lemar engaged the midfielders as well, Lodi had plenty of space and time to pick out his man and Morata made no mistake with an accurate header. While Atletico Madrid did not create too many chances, this represented an intelligent tactical change on their part.

Felipe and Mario Hermoso proved to be Atletico’s defensive foundation upon which they built their attacks. After Giménez was forced off the pitch with an injury, Hermoso slotted in seamlessly with Felipe in the heart of the defence. The Spaniard made 37 passes while his defensive partner made 45. They also made four tackles collectively and four interceptions. Their defensive efforts when Bayer attacked from the wings cannot be understated with Hermoso making a massive nine clearances and Felipe making three.

The defensive duo ensured that Atletico’s over-reliance on their full-backs for width did not cost them defensively and helped keep the home side in the game throughout the match. Even with Leverkusen dominating possession, Oblak was relatively untroubled and much of this can be accounted to Hermoso and Felipe’s defensive efforts.

As this tactical analysis has shown, it was a game of small margins between Atletico Madrid and Bayer Leverkusen in the Champions League. Leverkusen, despite their bravery, could not muster attempts on goal while Atletico were lucky not to be punished and struggled to create chances themselves. In the end, the game was decided by Morata’s header and the home side recorded a win. Bayer Leverkusen can take positives from their performance as a whole as they stifled Atletico Madrid and caused them some problems of their own. The tactics employed by both teams required constant adjustment and the tactical battle between the two coaches was interesting to see.