Lazio are slowly moving away from the Serie A top four this season and their upcoming fixture against Napoli is their chance to learn from their mistakes and minimise the gap to Juventus. They have been struggling with inconsistency and defensive vulnerability which takes a toll on their performance and often throws their attacking efforts to waste.

Napoli, on the other side, are still dreaming of winning the league title for the first time in 32 years and ending Lorenzo Insigne’s successful 12-year Napoli career properly, as he has signed a pre-contract with Toronto FC in the MLS. Contrary to their opponents, they are currently the best defensive team in the league with only 18 goals conceded. Failing to step up against the top five teams like Inter, Juventus and Atalanta, though, might have been crucial for their title ambitions.

They meet at an important point of the 2021/22 season and both managers Maurizio Sarri and Luciano Spalletti will be determined to grab the three points and move up in the table. Napoli have a better balance between the lines, which could be important for the win, but Lazio’s attacking proficiency could have the final say in the game.

In this preview, we use tactical analysis to explain how both teams could expose each other and what might be the key to their success.

How can Lazio expose the most efficient defence?

While Napoli have been the most efficient team defensively since the start of the season, they still have some flaws that Lazio could take advantage of. Sarri’s side impress with their high efficiency in attack, especially having in mind the low frequency of their shots. The team’s possession-based approach is often the reason for their success, but many times it takes away their explosiveness in attack.

Lazio rarely rely on crossing attempts to expose the opposition and that immediately decreased the number of shots they produce per game. Instead, they try to penetrate through short passing, smart positioning and through balls.

They tend to involve a few players upfront and use smart runs to the box to break through defences. The players’ positional sense has been key to their successful actions in front of the goal and the main reason for Lazio being leaders in terms of shot accuracy with 44.6% of their shots being on target. Of course, a huge part of their success is the attacking players’ finishing abilities, but what makes the difference is their placement in the final third and their ability to exploit spaces. 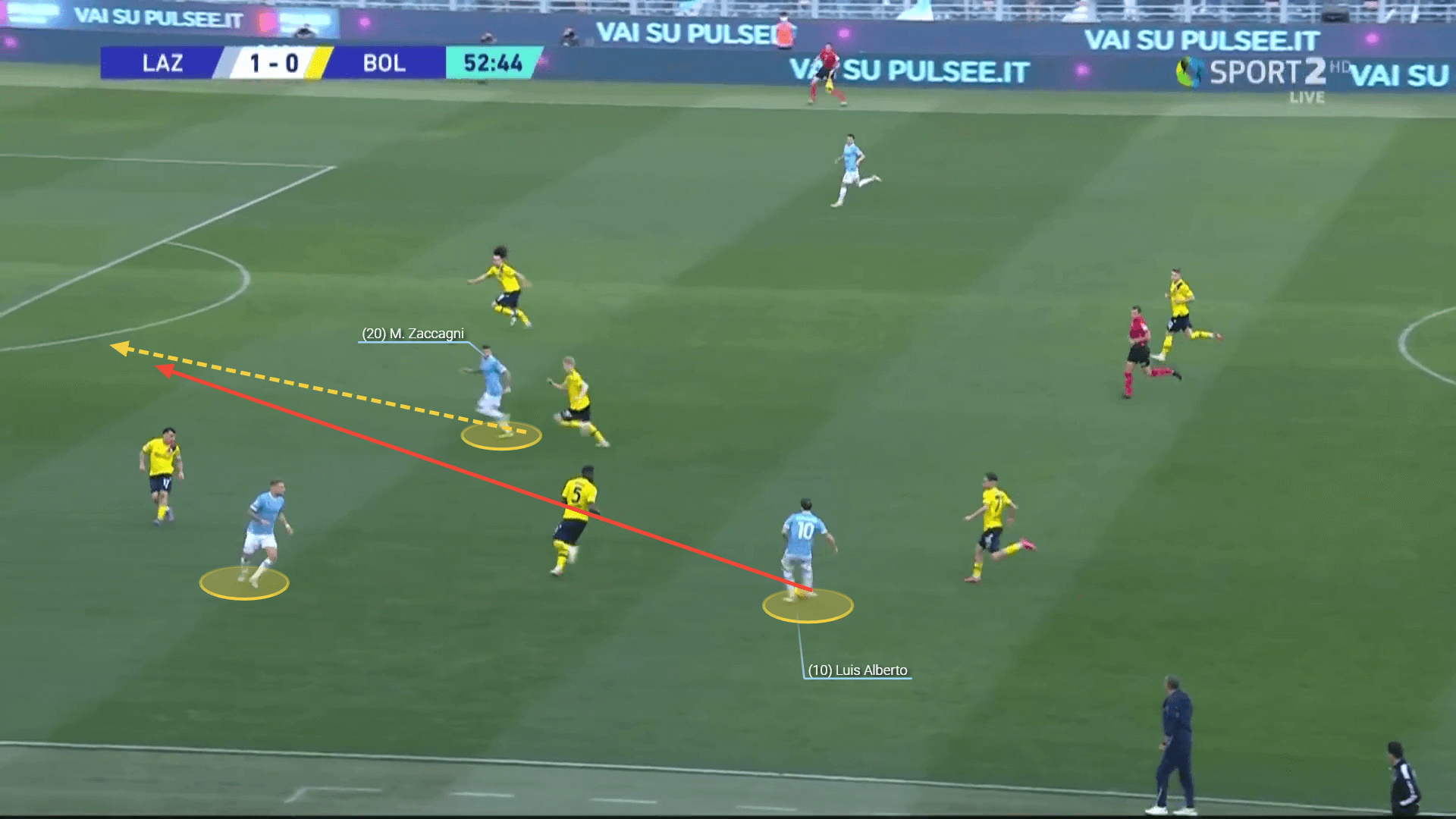 Ciro Immobile dragged his marker out of position and freed up space for Mattia Zaccagni who outran his opponent and managed to shoot.It might not be that easy to execute that strategy against Napoli, but they could force them into their trap. Quite a few of Gli Azzurri’s conceded goals have been a result of poor marking in and around the box followed by individual errors. They sometimes find themselves with fewer men in defence and struggle to cover the opposition, especially when it comes to skilful players. That happens mainly due to individual mistakes and the players failing in their direct challenges, rather than the team marking strategy.

Sarri’s players’ movement in attack is fluid enough to be able to force Napoli in such situations and rely on the attackers’ technical abilities to take on their markers.

Speaking about marking strategy and defending as a unit, Napoli’s defensive midfielders need to support the backline rather often, due to the full-backs’ advanced positioning, which is another flaw that Lazio could take advantage of.

As mentioned, Lazio don’t rely on crossing as frequently as the opposition, but they do tend to attack tough the flanks, which they need to focus on against Spalletti’s team. With the full-backs needing more time to drop back in defence and Lazio’s players’ tendency to cut inside and use movement off the ball and smart passes to expose the opposition, they might succeed in dispositioning their markers and scoring.

That’s also valid for their counter-attacking efforts, as their opponents’ advanced positioning could be a prerequisite for using their clinical movement on a counter to expose them.

Taking advantage of their set-pieces

Both teams might not be able to create many quality chances in front of the goal, that’s why they need to make the most out of their attacking set plays. That’s something both teams have been efficient in throughout the season with Lazio scoring eight goals from these opportunities, while Napoli have scored ten.

Napoli’s chance to succeed in their attacking set-pieces is by focusing their actions in the box and trying to take advantage of the opposition in the air. Lazio have been struggling to defend headshots since the start of the season and Spalletti’s players need to acknowledge that and try to exploit it. That’s something quite a few Napoli players could help with. André-Frank Zambo Anguissa, Giovanni Di Lorenzo and the leading goalscorer Victor Osimhen could easily outplay the opposition in that area and convert their chances into goals.

Lazio’s chances of exposing Napoli with their set-plays are also rather high. They most frequently manage to threaten the goal through their corners. The team use their positioning to overload certain areas and even if they fail to score straight away, they often take advantage of the second balls and the oppositions’ efforts to turn over.

Napoli need to stick to what they do

Napoli have a balanced attacking approach and try to expose the opposition in different ways. One of the key elements in their actions on the ball is their success in 1vs1 situations. Their ability to hold on to the ball and dribble past their opponents has been crucial for their efficiency in attack so far. Not only because it allows them to progress the ball successfully but also because it often forces the opposing players into mistakes and harsh actions which results in fouls.

As mentioned, that’s the best-case scenario for them due to their set-piece proficiency, but additionally, the team have been awarded 10 penalty shots so far (the most in the league), scoring seven of them and making their life easier. Despite being among the top three teams with the fewest fouls committed per 90, the Lazio players need to be careful with their interactions in and around the box as they might give Napoli a huge advantage.

Another way for Gli Azzurri to expose their opponents would be creating long shot opportunities. Napoli have been very successful in their efforts from distance (scoring eight goals) and that could be crucial against Lazio. I Biancocelesti have been struggling in defending shots from outside the box and have conceded seven times from such situations. While they position well in the box, their low block often forces their opponents into shooting from distance, which has put the goalkeeper in a difficult position.

Both teams have their ways to expose each other and it will be a matter of awareness and ability to convert the chances into goals. Despite having the best defensive record in Serie A, Napoli do have some weaknesses that could make it difficult to keep a clean sheet. On the other side, Lazio usually struggle in defending exactly what the opposition are strong at, which give Napoli a slight advantage in this game.