The biggest match of Premier League game week 8 is happening on Sunday with a duel between the last two league winners. Both sides are coming off the back of convincing victories in the Champions League as well. This tactical analysis will be based on situations where both teams can hurt each other.

Every football fan, especially those who are into tactics and like tactical battles between managers, are looking forward to this matchup between Jürgen Klopp and Pep Guardiola. The last time they met was on 2nd July when Manchester City demolished Liverpool 4-0 and even though it didn’t have too much impact on the table, surely it was a bitter taste for Klopp and his players to lose like that. The analysis will highlight potential situations that could happen in the match and how each team will try to take advantage of the other’s flaws. 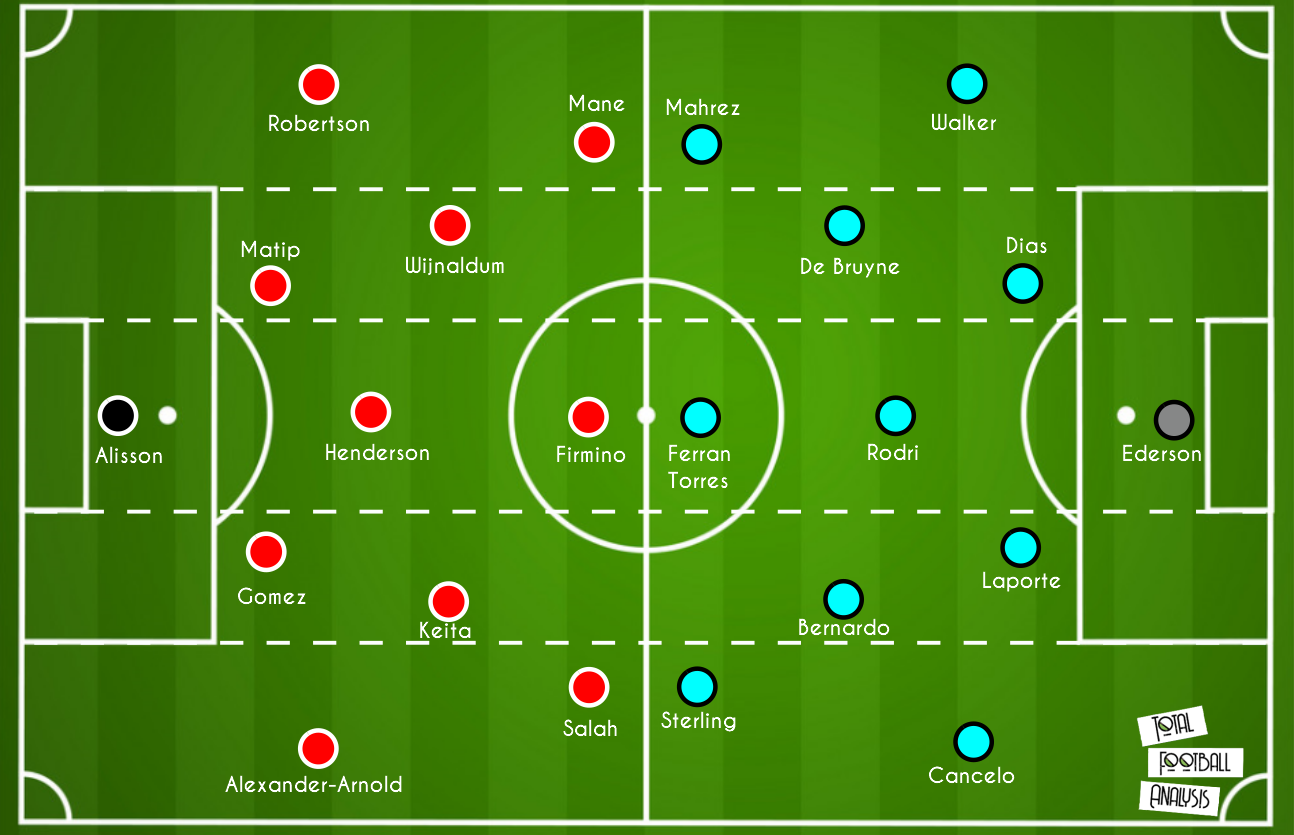 This is the lineups we can expect and the biggest questions are will Ferran Torres stay in starting XI even after Gabriel Jesus’ return to action this week and will in-form Diogo Jota move Firmino to the bench. We know how much Guardiola likes Jesus and it wouldn’t be surprising to see him put the youngster at the top of his attack. It would be warranted too since Torres showed he can play in the middle of Manchester City’s attack with a few quality performances this season in that position. Jota, on the other hand, has impressed for Liverpool since his arrival while Firmino is not in his goal-scoring form and many people are wondering whether the Brazilian will still be the preferred option for Klopp. However, Firmino’s qualities come to light in other areas and in a match like this, his defensive contribution and link-up play could put him ahead of Jota for this fixture. In the last two matches, Klopp gave a spot in starting XI to two unproven players (Nathaniel Phillips and Neco Williams) next to Joe Gomez at the centre-back positions, but Joël Matip seems like the logical option because of his experience in bigger matches. Phil Foden had a great match for Manchester City last time when they faced Liverpool, but now all the midfielders are available except Fernandinho and he faces competition from Bernardo Silva and İlkay Gündoğan.

Liverpool scored 17 goals from 16.5 xG in seven matches this season in the Premier League. he disaster against Aston Villa led to Liverpool conceding an unreal 15 goals which means they have underperformed their expected goals against values – 9.6 xG against. Manchester City played one match fewer than Liverpool, but unusually for them, they created only 9.2 xG and scored nine goals in return. On the other hand, they conceded eight goals and allowed 8.3 xG to their opponents.

We can say that both teams are vulnerable to counter-attacks as both have their full-backs high on pitch and centre-backs heavily engaged in build-up, meaning they are standing almost around the half of the pitch. In the example below, you can see a potential situation where Manchester City lose the ball on the right flank where they often try to overload the opposition left-back with Kyle  Walker, Riyad Mahrez and Kevin De Bruyne forming a triangle. 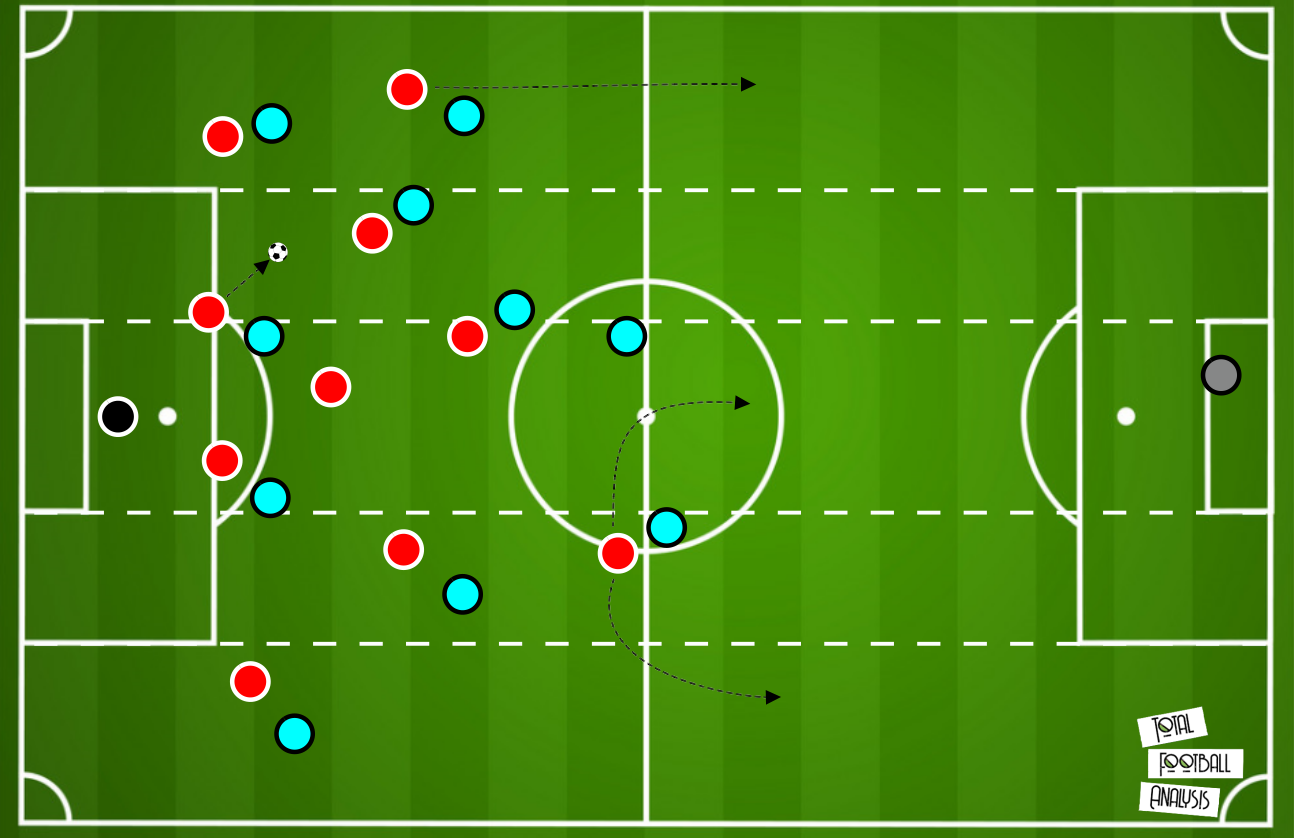 At that moment when the ball is won by Liverpool, it triggers both Sadio Mané and Mohamed Salah to run into open space behind the opposition defence. Virgil van Dijk is the player that would often attempt the long ball into the open space to start counter-attacks but with him out, that duty will now fall on the back of Gomez or potentially one of the midfielders nearest to the ball. The ideal situation would be that Trent Alexander-Arnold starts the counter-attacks given his impressive passing range. Salah is always ready for a counter-attack and he stands highest up the pitch while Mané mostly helps the defence.

Mané often uses his pace to beat opponents but will have a tough task outpacing Walker on his side given Walker’s physical abilities. This means catching him out of position could yield a better chance to hurt Manchester City. Salah has enough space to cut inside to receive the ball in the central area of the final third but can also drift wide from where he can cut inside on his stronger foot. This is, of course, with the assumption that Manchester City will probably have more possession than Liverpool since the Reds are missing Fabinho and Van Dijk – both players who are crucial in their build-up while also the new signing Thiago won’t be available to contribute when the team is in possession of the ball.

We know that the main playmaker in the Liverpool team is TAA. His passing range and vision are crucial in Liverpool’s chance creation. Below is the example where TAA receives the ball from the centre-back right into the opposition half and searches for a vertical pass to Firmino. That passing lane was opened by Jordan Henderson drifting wide. However, if Firmino draws the centre-back towards him, it opens space for Mané to run into, which creates another option for TAA as he has the ability to hit that chip pass over the defence. 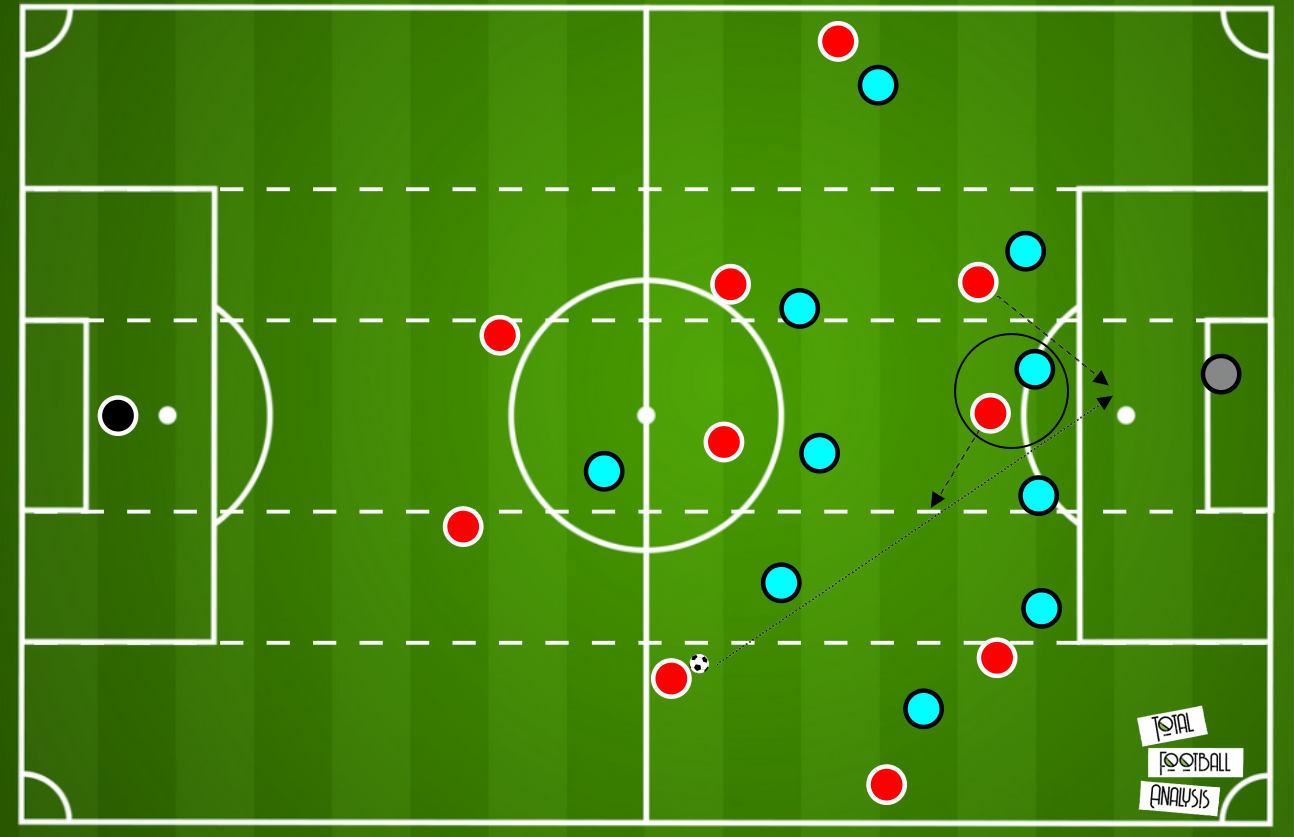 These images depict examples from matches against West Ham and Arsenal and they show us both of the aforementioned situations. The first frame below is from the match against West Ham. 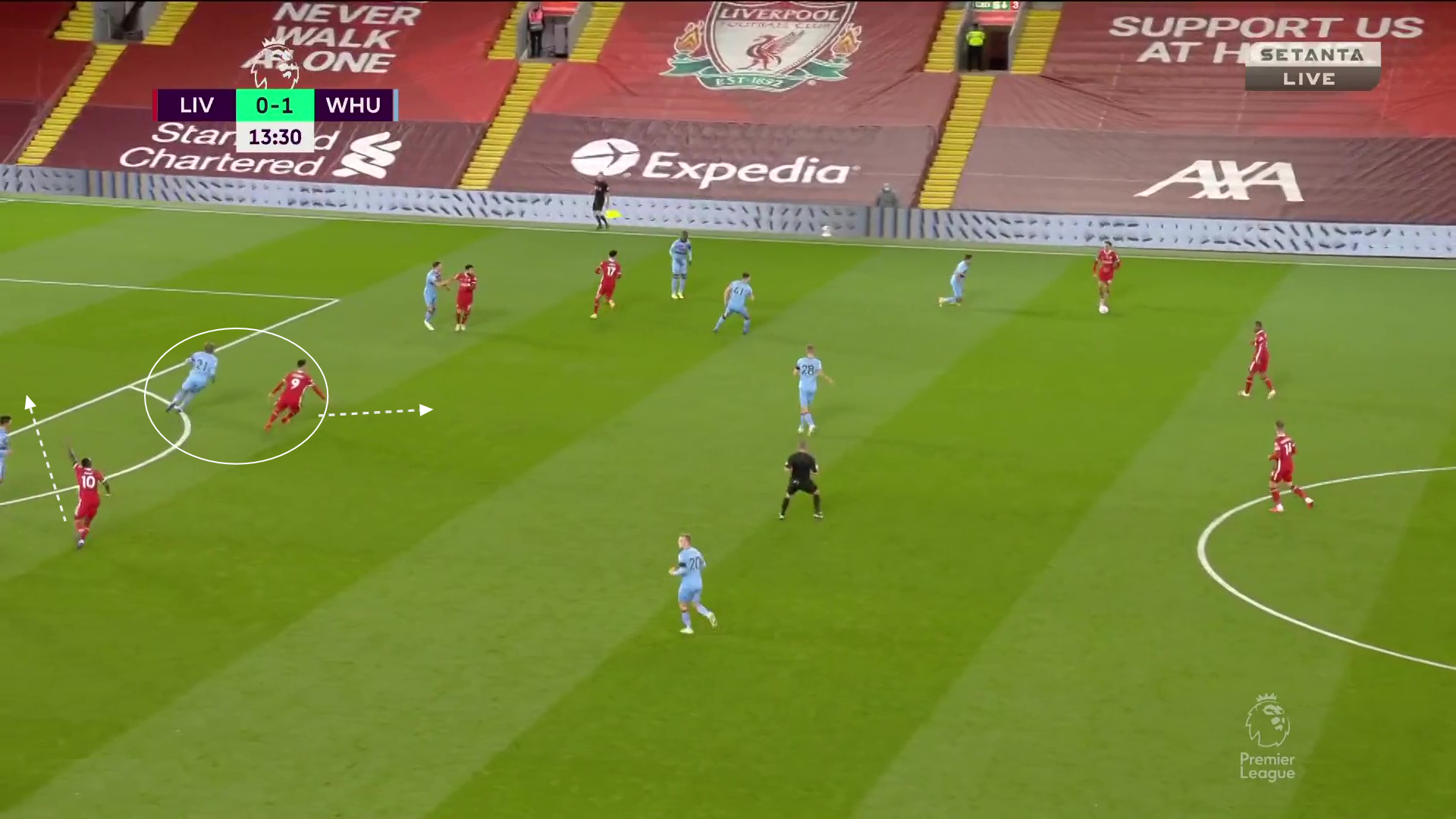 We can see how Firmino fakes his movement towards the penalty area and then suddenly changes directions and opens himself for a pass into the feet. Mané recognises the situation and demands the ball into the open space behind the centre-back which was drawn out of the defensive line by Firmino.

TAA opts for Firmino in this situation, but a similar situation happened in the image below. This time it is easier for TAA to try to pass to Mané because Arsenal’s defence stands higher on the field than West Ham’s defence in the previous image. 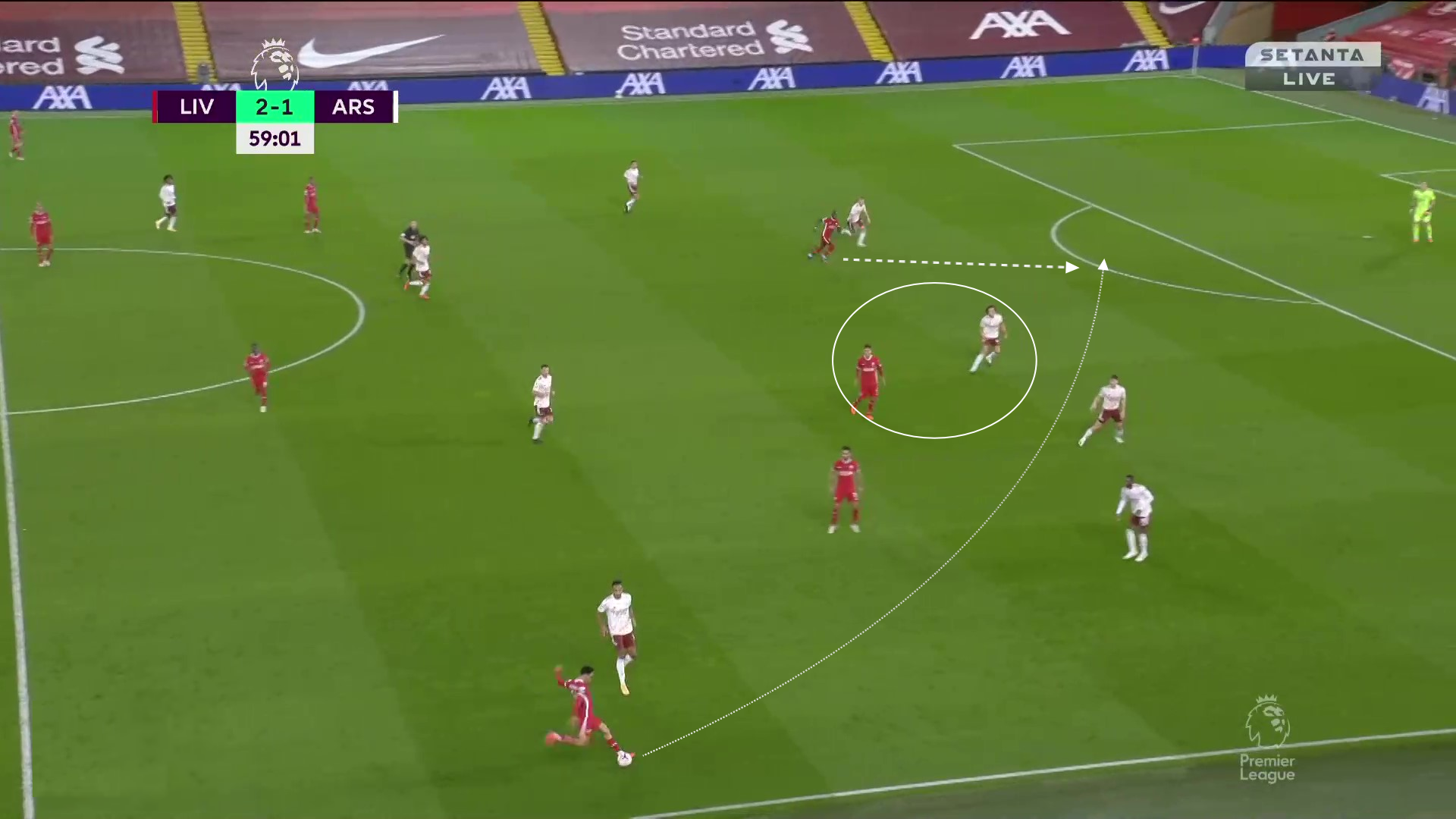 In the example below, we can see that if one midfielder drops to shadow Firmino it would give a solution for Manchester City to prevent vertical passes from TAA. Covering the passing lane to Firmino would put TAA in a position to play a simple pass or switch sides to Andy Robertson, which is less dangerous than the situations where the passing lane towards Firmino is not covered. 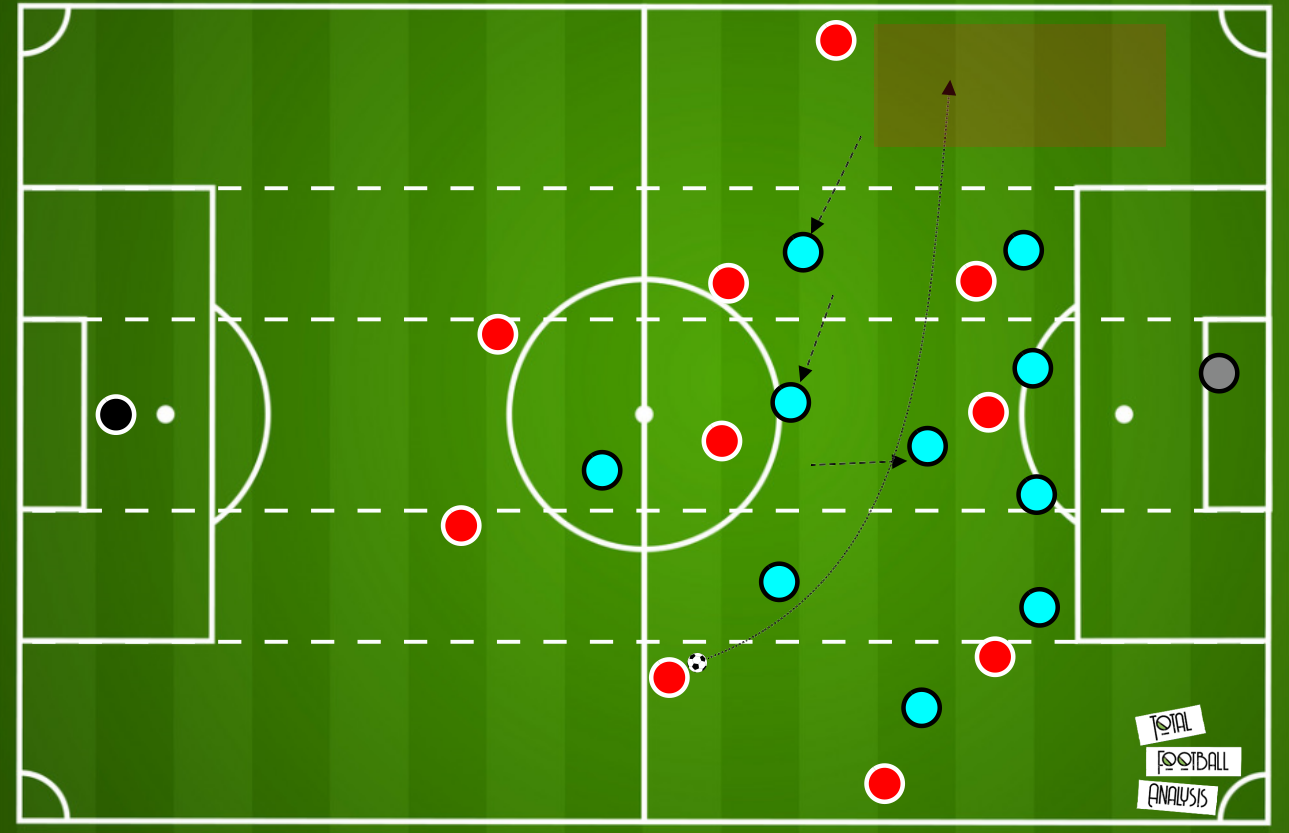 If Klopp chose to go with Jota instead of Firmino it would be interesting to see Manchester City defence deal with three fast forwards when there is still not an established pattern of how they play together.

Both teams like to engage in high press, but given the technical ability of Manchester City players and Liverpool missing crucial players for their press, it could be a chance for the Citizens to exploit that and create dangerous attacks. 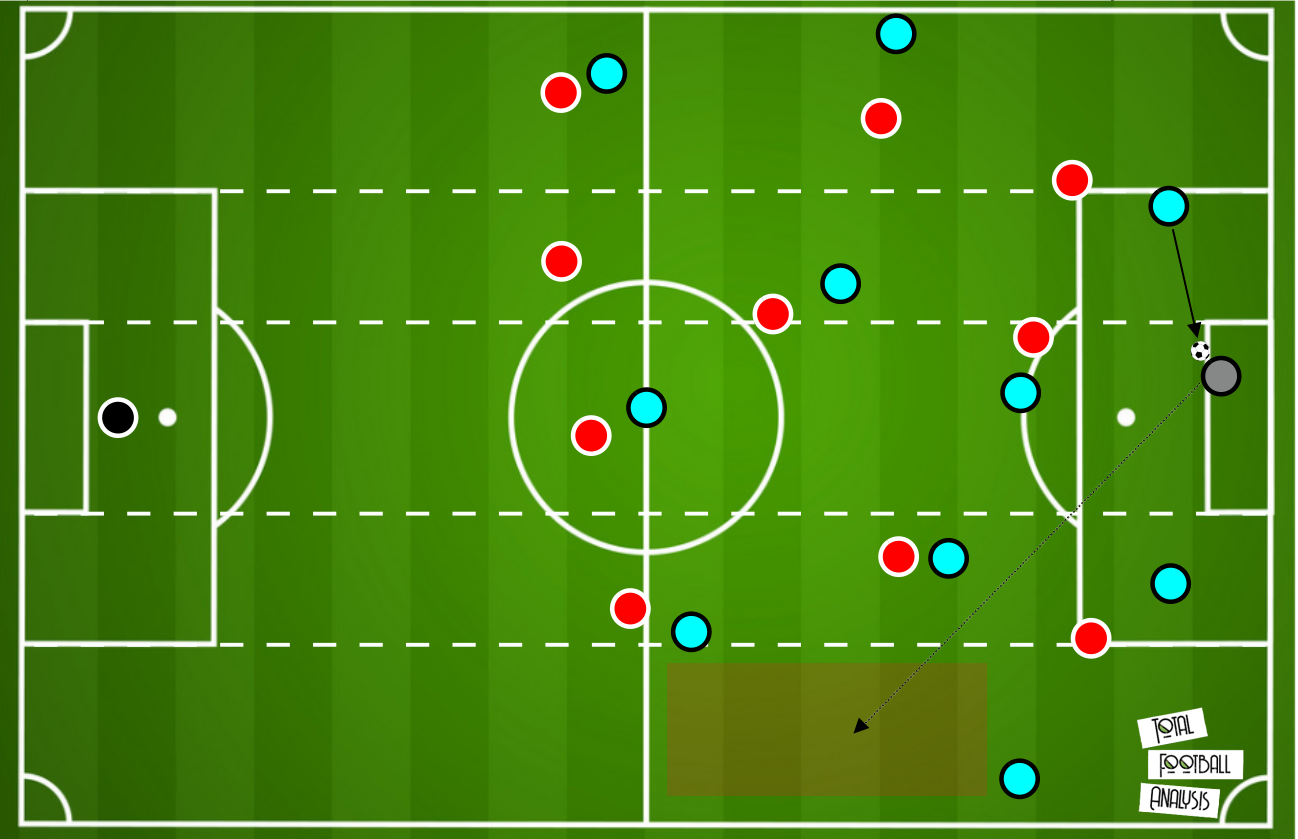 The situation above shows how Manchester City build attacks from the back. Liverpool often press the goalkeeper but Firmino will often try to shadow Rodri and try to cut any possible passing lanes towards him to suppress Manchester City’s progression through the middle. Liverpool pressing one side when the winger presses the centre-back could leave an opening on the flank for the full-back to exploit. It is crucial that Raheem Sterling positions himself high enough to open the space for Ederson to look for João Cancelo, and the same goes for the other side with Mahrez and Walker. Sometimes that passer can be one of the centre-backs instead of Ederson as well.

The biggest difference in this match could be the unproven Liverpool defence without Van Dijk. It doesn’t mean that other players can’t defend, but Van Dijk provides stability both on the ground and in the air while also being vocal in helping his teammates position themselves better. De Bruyne’s crossing could prove decisive in this match if Liverpool’s defence is not careful enough. The situation below shows how Manchester City overload the right side and De Bruyne arrives from the half-space on a backpass from Walker to attempt a cross between the 6-yard-box and the penalty spot. Liverpool’s defence needs to keep a straight line and if any player is behind the others, it could give an extra step to Torres/ Jesus and Sterling to accelerate into the penalty area in an attempt to score. 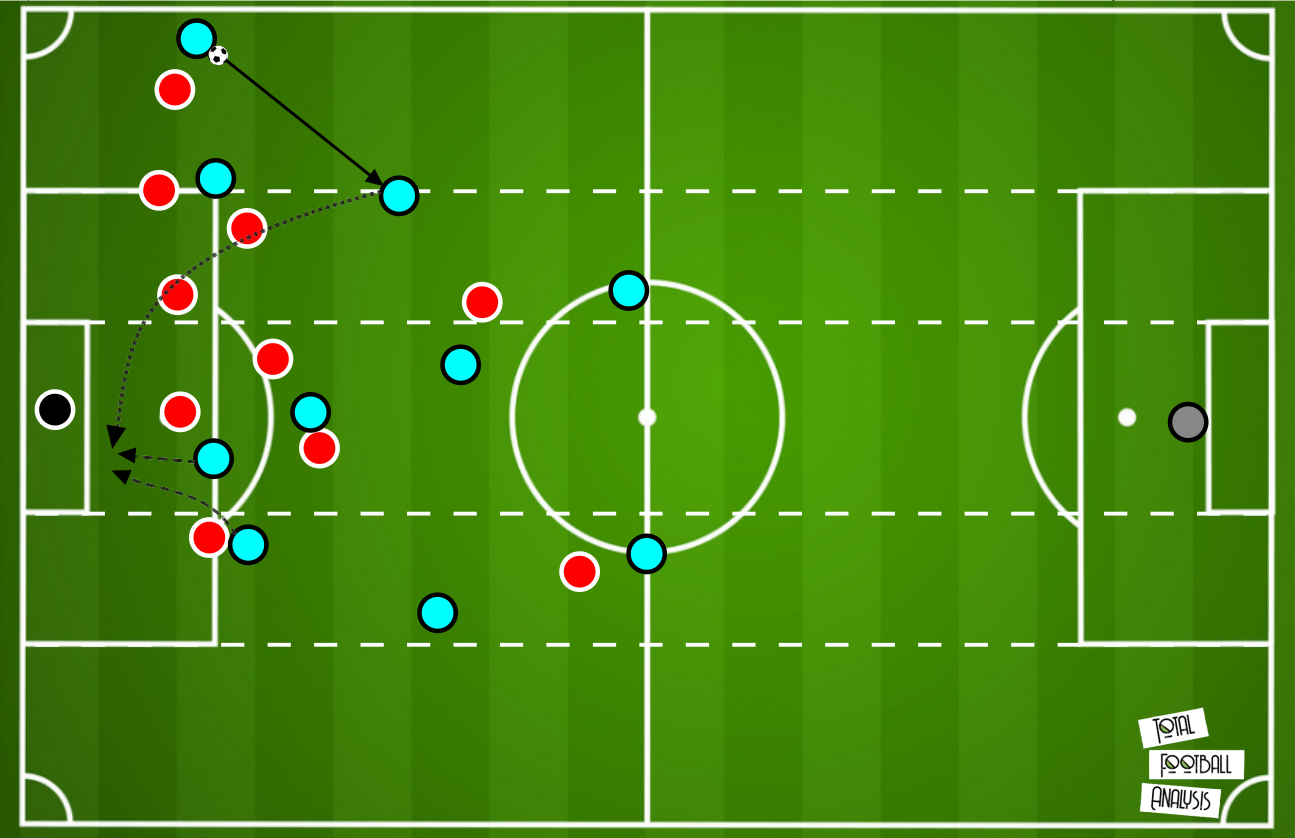 In the image below we can see one of those situations where De Bruyne attempts a cross from the right flank. Leicester’s defence is positioned deeper in their penalty area which is a good solution to cover space to prevent low and medium crosses from going through. Manchester City forwards are not dangerous in the air from open-play and minimising areas where they can attack low/medium crosses would reduce the probability of them to score after crossing from open play. 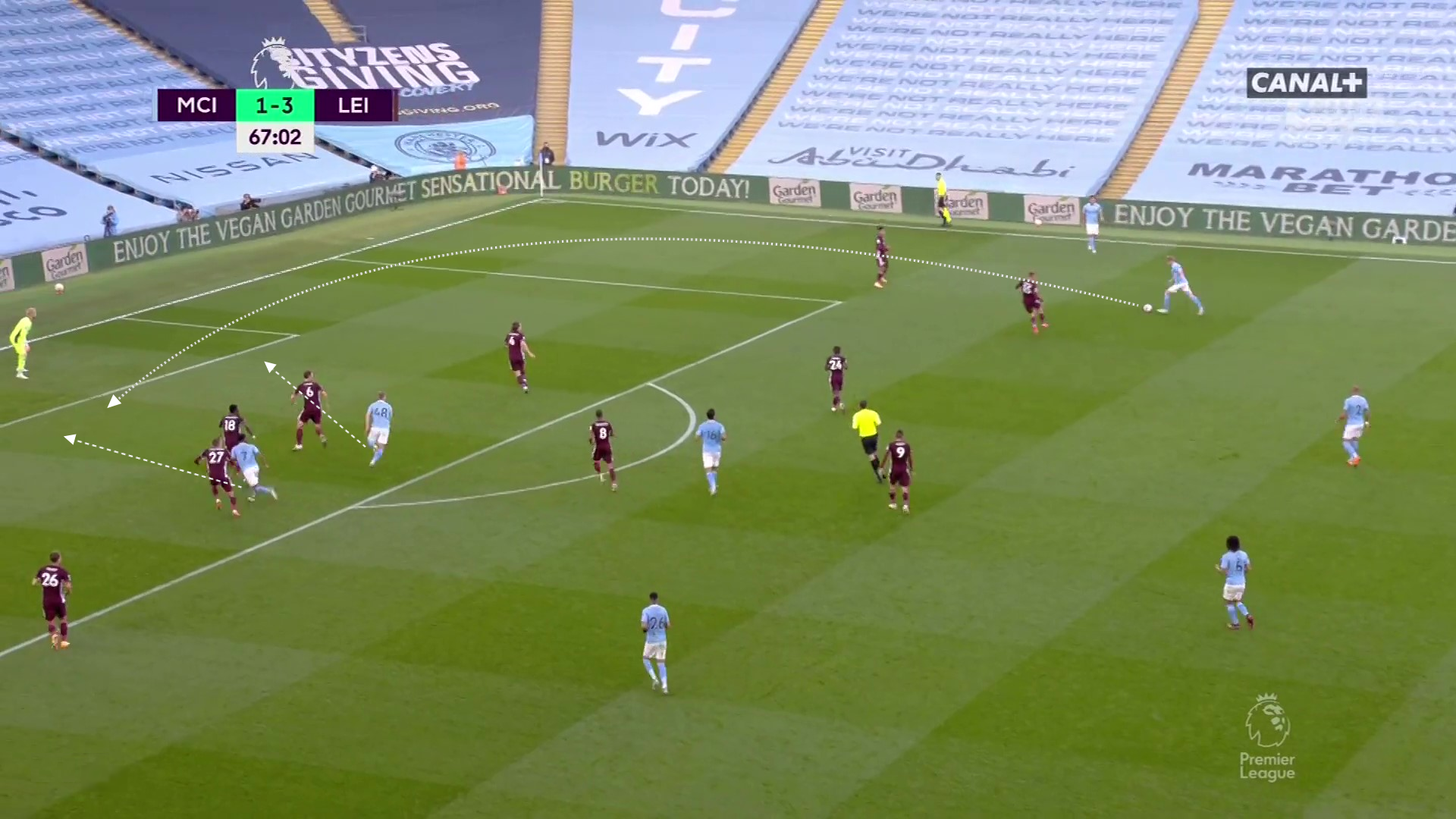 However, set-pieces could be a different story. Only Leicester conceded more goals after set-pieces (4) than Liverpool (3). Both teams scored twice after set-pieces and with Van Dijk and Fabinho missing, only Matip stands-out as a tall player for Liverpool who can cope with Rúben Dias, Aymeric Laporte and Rodri. Manchester City have a big chance to profit from De Bruyne’s quality set-piece deliveries given the lack of aerial presence in the Liverpool team. It often happened in the past that high-profile matches were decided by a set-piece and it wouldn’t be surprising that a set-piece goal delivers points to one of the teams this time as well.

Every Premier League fan will look forward to this match and we can see why because there is a lot of talent in both teams. Not only that both teams possess talented players, but they also have top coaches leading them. A slight advantage for this match goes to Manchester City, but don’t be surprised if it indeed goes the other way in the end.