Both Tottenham Hotspur and Liverpool came into this match in contrasting recent form. Liverpool had only dropped points on one occasion so far in the Premier League, winning every single game before and after their draw with Manchester United. Tottenham had won just one match in their last five, with losses to Chelsea and Southampton and draws to Middlesborough and Norwich dampening their win over Brighton. Liverpool have not lost a Premier League game in over a year, with their last defeat coming at the Etihad in a 2-1 loss to Manchester City. The Reds are currently on an eleven game winning streak in the Premier League, with a draw to Manchester United in October being the last time Klopp’s men dropped any points. At their current rate, Liverpool will finish the season with a record-breaking 110 points, and finish as they only other team to go unbeaten for a full Premier League season since Arsenal’s Invincibles in 2003/04, that legendary team accumulated 90 points that season, a number which Liverpool will reach in 11 games at their current rate of 2.9 points per game, which is truly a testament to how difficult it will be for Tottenham Hotspur to get a result in this match.

In this tactical analysis, I’ll preview the tactics José Mourinho and Jürgen Klopp might use to outwit each other in the Premier League clash.

Liverpool’s match plan and thus their lineup is much easier to predict. They’ll look to dominate possession, using their extremely high fullbacks as creative outlets. Liverpool are the protagonists of the match, so any tactical or personnel change will be minor. Although Klopp has used a 4-2-3-1 this season, I predict he’ll use a 4-3-3 with the following starting XI. 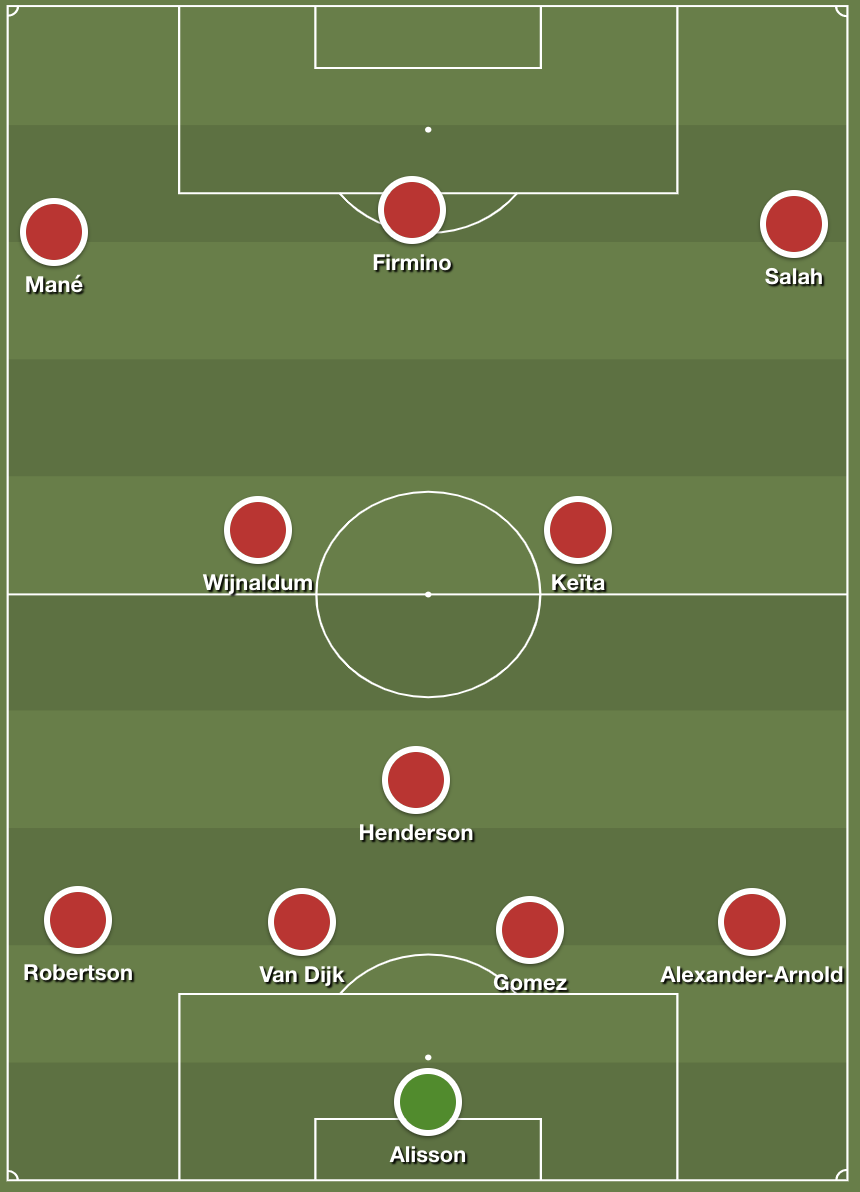 The above lineup has been Klopp’s favoured lineup since Fabinho’s injury. Although James Milner or Alex Oxlade-Chamberlain could potentially replace Naby Keïta. Predicting how Liverpool play is not a difficult task, but the interesting tactical battle comes when considering how Mourinho might look to counter Liverpool.

Tottenham Hotspur will be without Harry Kane, Moussa Sissoko, Tanguy Ndombélé, Ben Davies, and Hugo Lloris, making their lineup particularly hard to predict. The absence of Kane and Sissoko are the most tactically detrimental, with the pair being regular starters since Mourinho was appointed. Although Kane is a world-class goalscorer, his work off the ball is excellent, and with the lack of true centre forwards behind Kane, his injury is worrying for Tottenham.

It’s quite difficult to predict how Mourinho will set Tottenham up, as it is entirely dependant on how he wants to counter Klopp’s tactics as he will be reactive and try to nullify Liverpool’s threat. It’s likely that Mourinho will look to sit back, having less than ~35% possession throughout the match in a deep, compact, low block, and look to catch out Liverpool in transition and take advantage of Liverpool’s attacking fullbacks. So, how could Mourinho set Tottenham up to best achieve this?

I think he’ll line Tottenham up in a 3-5-2/3-4-1-2, with Son and Lucas Moura as strikers, and Ryan Sessegnon and Serge Aurier as wingbacks. 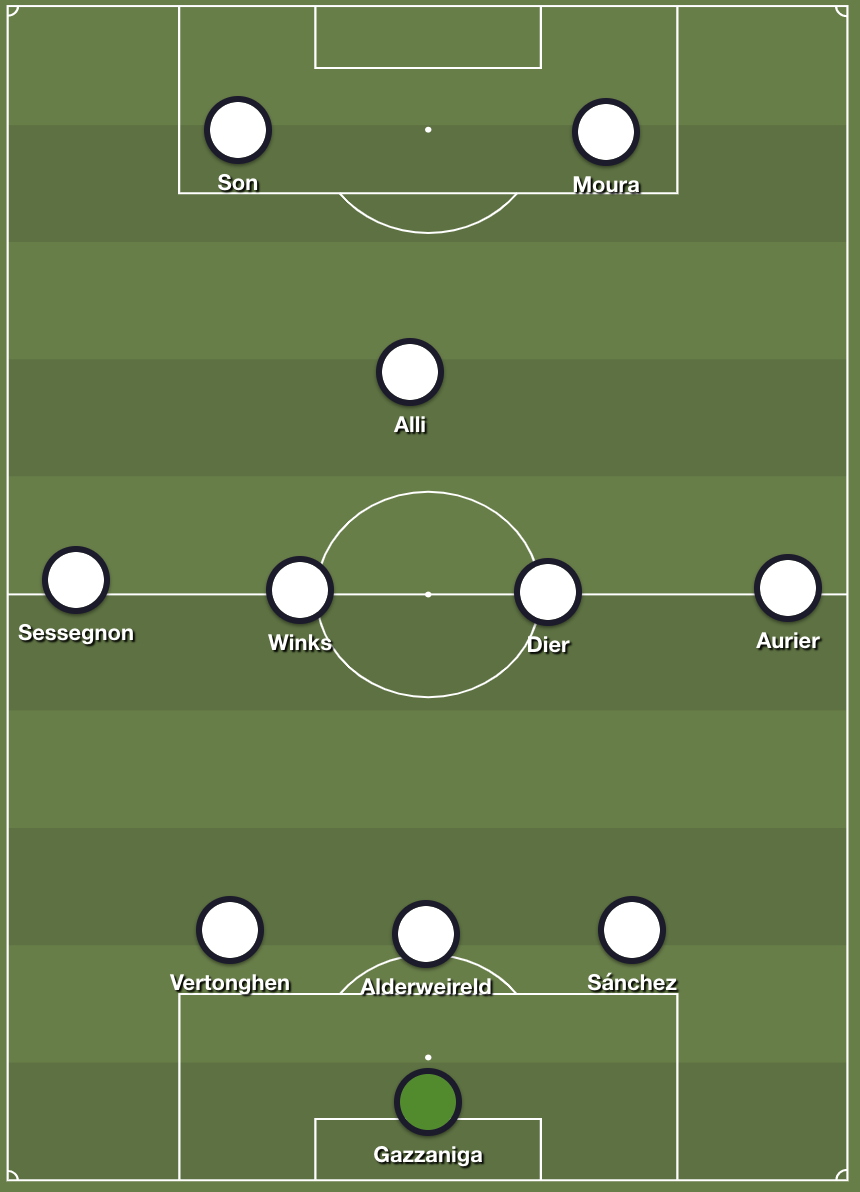 This can match up against Liverpool’s 2-3-5 shape in offensive organisation. Three central defenders can man-mark Liverpool’s famed front three of Mohamed Salah, Sadio Mané and Roberto Firmino in a zonal fashion, meaning that they’ll likely mark their man tightly until their zone is vacated, then they’ll “hand off” the forward to another defender. The wingbacks can add defensive solidity out wide to nullify the threat of Trent Alexander-Arnold and Andrew Robertson, while also adding threat in offensive transition, keeping Liverpool’s fullbacks in check. Eric Dier and Harry Winks are good positionally, and can match up against Georginio Wijnaldum and Keïta respectively. Dele Alli can man-mark Jordan Henderson and prevent Liverpool from circulating the ball via the ‘6’ space while also packing out the midfield when Tottenham drop deep, while Moura and Son can stretch Virgil van Dijk and Joe Gomez in transition. Liverpool will use a high line, which is dangerous as Tottenham are adept at movements into depth to exploit a high line. Alli is likely to push forward and create a 3v2 overload against Liverpool’s centre backs in transition, while Tottenham’s wingbacks push up, with Sessegnon, in particular, being a goal threat.

The most important aspect of this match from a Tottenham perspective is denying Liverpool’s fullbacks the time and space to cross, which is why I think Mourinho will choose a back three/five. However, choosing a back four with wingers tracking back to double up on Liverpool’s fullbacks could provide a makeshift back six at times, but would sacrifice some threat in offensive transition.

Tottenham’s build-up could help them in transition

It’s unrealistic to assume that Tottenham will always play long and only rely upon offensive transitions to hurt Liverpool, as using short build-up play to invite Liverpool’s high press, before utilising the above tactics will be an effective one, should Tottenham be careful not to take unnecessary risks against arguably the most effective pressing unit in the world. Tottenham’s build-up shape under Mourinho has the potential to effectively enticing Liverpool’s press, as Liverpool’s 4-3-3 pressing shape is a mismatch for Tottenham’s build-up structure.

Regardless of starting formation, Tottenham have built-up with a back three under Mourinho, with Vertonghen shifting from left back to centre back when using a back four, and Aurier pushing high. The double pivot has occupied space between the opponent’s first and second lines. When needed, the right-sided pivot will drop into the right back position to add width.

This could pose problems for Liverpool as, to avoid their lines being broken, the midfield and defensive lines will have to be high, which, as mentioned before, is dangerous against a Mourinho team. The positioning of the advanced midfielders is redundant in the below image, as a 3-5-2 doesn’t possess the same shape, however, I think the middle third of the pitch will mostly be bypassed by Tottenham.

With Liverpool in fine form and 28 points ahead of Tottenham, they go into this match as heavy favourites. However, Mourinho has thrived as the underdog in his career so, despite poor form recently, don’t write Tottenham off. With a win Liverpool will go 16 points clear of second-placed Manchester City with both sides having played 21 games. A draw will mean that Liverpool drop points for only the second time this season, while a win for Tottenham will mean that the Lily Whites could overtake Manchester United if Ole Gunnar Solskjær’s men fail to beat bottom of the table Norwich. Regardless of the result, this match will be a fine tactical battle between two of the most successful managers of the past decade. 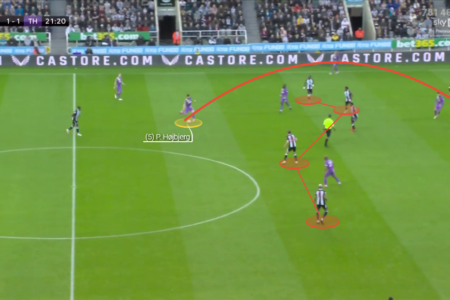 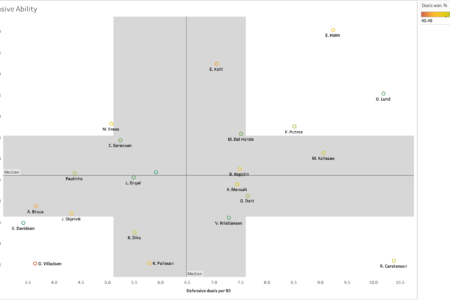 In our second data analysis piece on Danish Superliga, we will be looking out for the best full-backs currently playing […]