Sheffield Wednesday and Watford both kicked off their EFL Championship seasons with victories last week. The Owls, who started their campaign with a 12 point deduction, secured an away win against last season’s playoff semi-finalists Cardiff City. Meanwhile, the Hornets won their first Championship game since 2015 with a 1-0 victory over Middlesbrough.

Before that, the Watford’s last Championship clash was actually a 1-1 draw with Wednesday back in 2015. A last-minute equaliser from Owls’ substitute Adthe Nuhiu famously stopped Watford from lifting the league title. Will the men from Hertfordshire be able to gain revenge on their Yorkshire counterparts?

This tactical analysis will preview the early season encounter, with a look at the tactics both teams employed in their opening day.

Both teams opted to start with a back three on opening day, and we think it’s likely that the two line-ups will be unchanged. However, it’s worth noting that Watford have a whole host of players who are either injured or uncommitted to playing for them in the second tier. Therefore, we could see Hornets manager Vladamir Ivic make a few changes, but it’s hard to say who would come in.

Wednesday started with Dominic Iorfa, Tom Lees and Joost Van Aken in central defence, in front of goalkeeper Cameron Dawson. After keeping a clean sheet, Garry Monk will likely stick with that. Kadeem Harris moved to the right wing-back role for the first time, allowing Matt Penney to start on the left. We expect Barry Bannan and Massimo Luongo to play in central midfield, with Chelsea loanee Izzy Brown just in front of them. Josh Windass and Jordan Rhodes should retain their places up front. 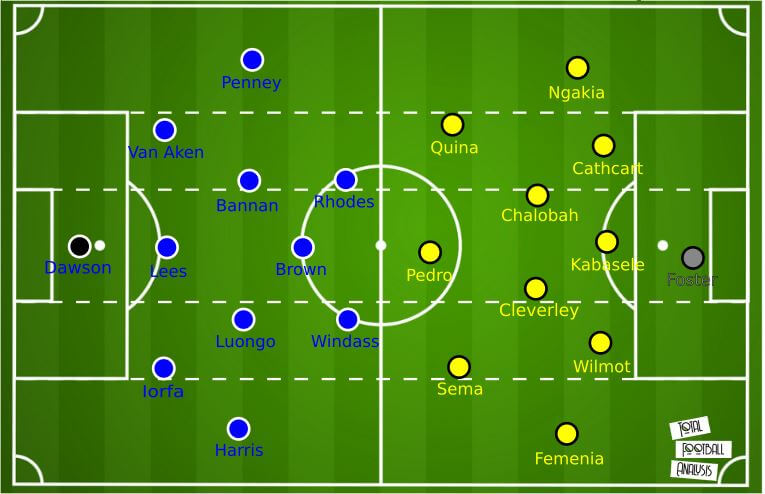 Watford started with a 3-4-3 formation, which changed into a 5-4-1 as they protected their lead in the second period. Former England international Ben Foster is almost certain to keep his place between the sticks. The Hornets defended very well against Middlesbrough, so we expect them to stick with Craig Cathcart, Christian Kabasele and Ben Wilmot in the rearguard. Kiko Femenia and former West Ham man Jeremy Ngakia should play at wing-back, with Tom Cleverley and Nathaniel Chalobah in central midfield. Ken Sema and Domingos Quina are likely to be supporting the exciting Joao Pedro in attack.

The Hornets were without 17 senior players for the Middlesbrough game, but Watford manager Vladamir Ivic has confirmed that Craig Dawson will be in contention for the Hillsborough clash. He also didn’t rule out the possibility of Ismaila Sarr returning to the line-up.

Wednesday put in a superb defensive display at the Cardiff City Stadium, limiting their Welsh hosts to 0.53 xG. Cardiff had 63% of possession, but they failed to create clear cut opportunities. Part of that was down to their lack of imagination and creativity, but Garry Monk’s side were excellent defensively. The Owls knew that Cardiff struggle to break teams down when they’re allowed to have possession, so the visitors formed a midblock. The Bluebirds played their familiar 4-2-3-1 system, and the front two of Josh Windass and Jordan Rhodes focused on man-marking Cardiff’s double pivots, instead of aggressively pressing defenders Sean Morrison and Curtis Nelson. 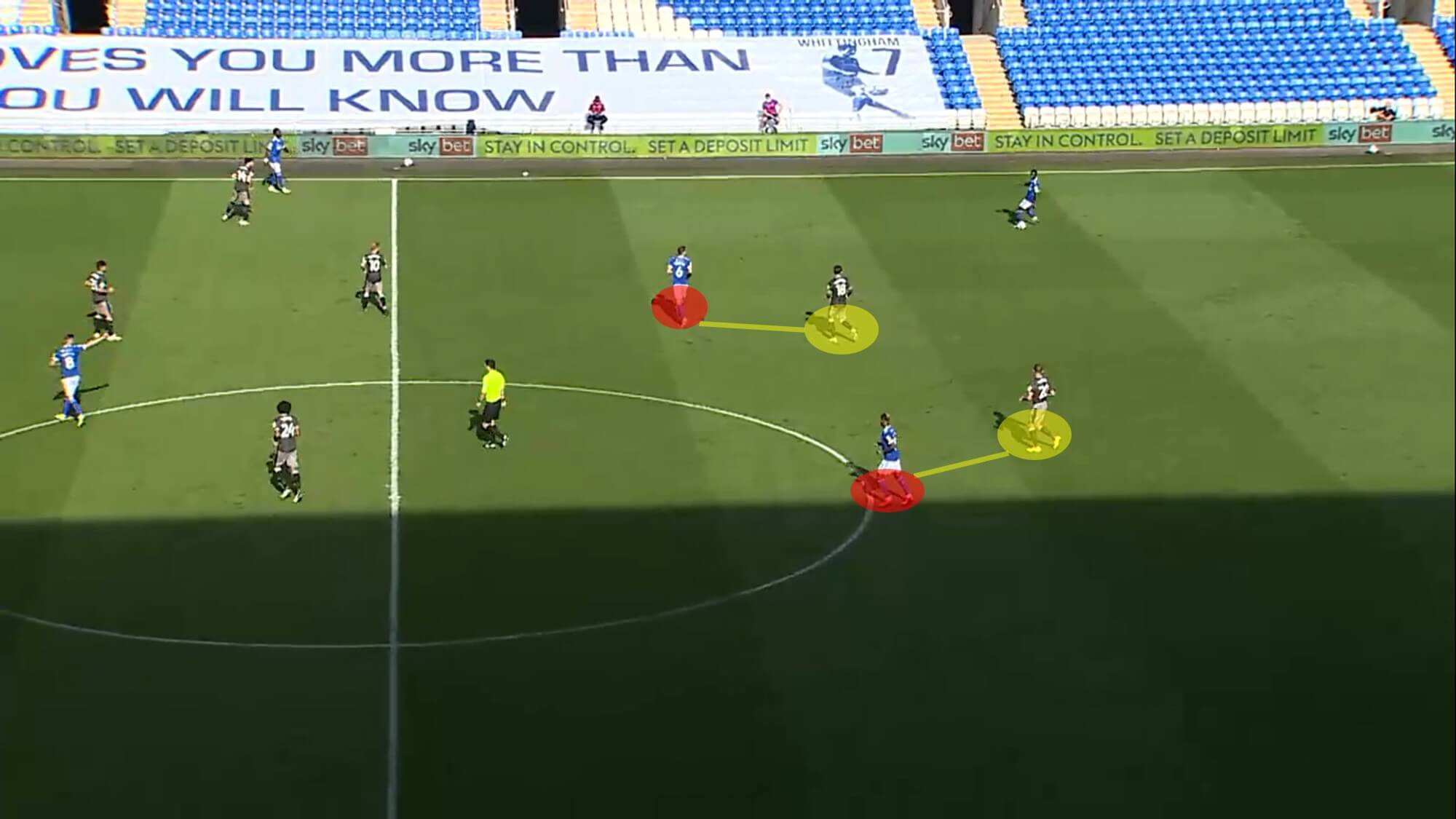 By cutting off the simple pass into the midfield two, Wednesday gave Cardiff three options: either go long into the channel, aim for target man Kieffer Moore, or play the ball around the back and attempt to move the Owls players in the hope that a gap will appear. Cardiff aren’t a team who like to patiently keep the ball at the back, so they mainly aimed for Moore.

However, their service up to the Welsh international was abysmal, and he was often surrounded by three central defenders whenever the ball went up to him. 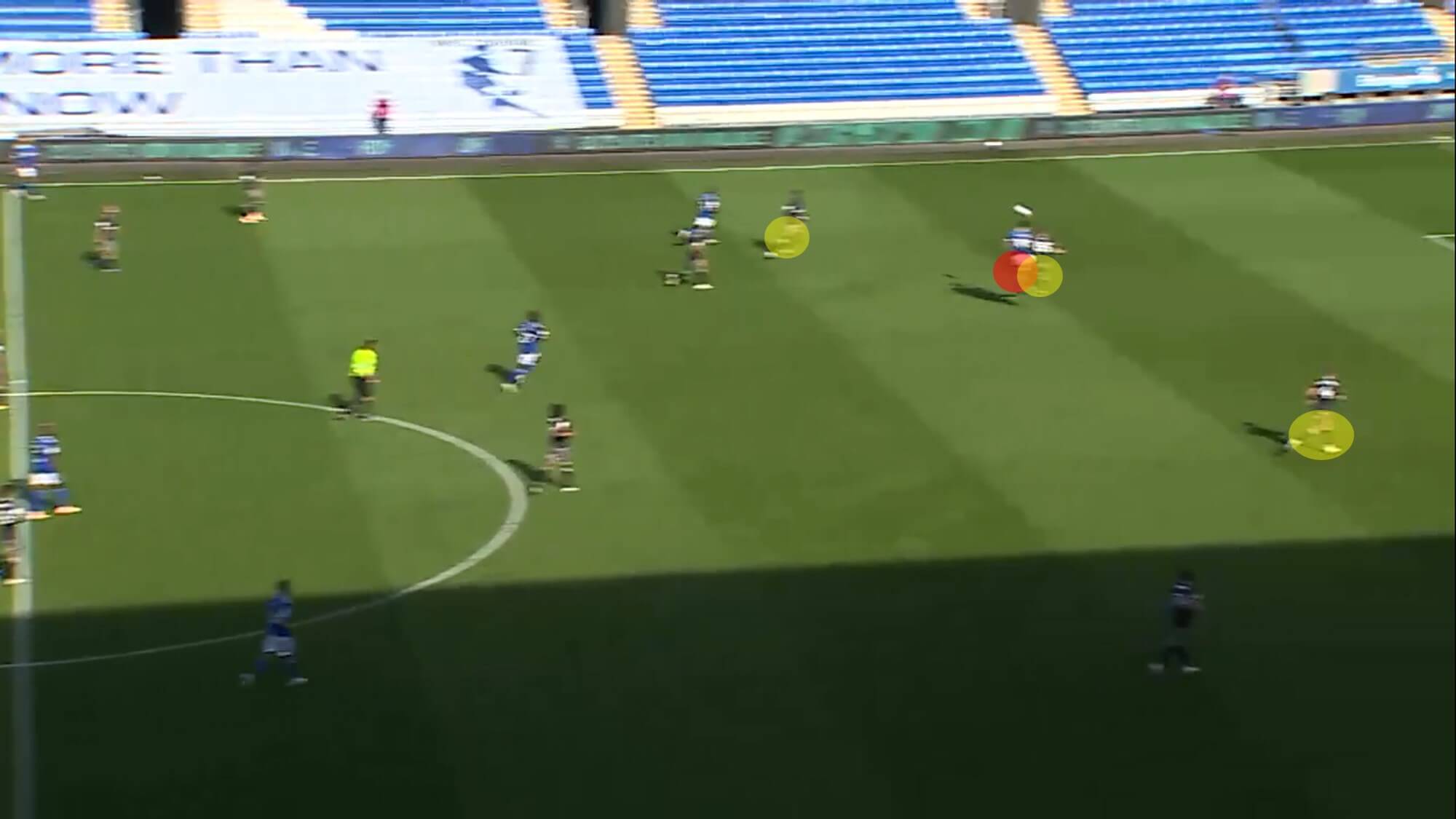 This meant that he was often outnumbered, isolated and unable to assert his physicality. As a result, Cardiff’s attacks often petered out.

The Owls made sure they kept their vertical compactness throughout the game, as another way of stopping the Bluebirds from playing through them. The strikers didn’t press the central defenders too high, and the defence held a relatively high line throughout the contest. This meant that there was very little space for Cardiff to play through. In the image below, you can see that there isn’t much space between Wednesday’s lines. Striker Jordan Rhodes keeps a sensibly low distance from the Owls’ deepest defender to maintain that compactness. 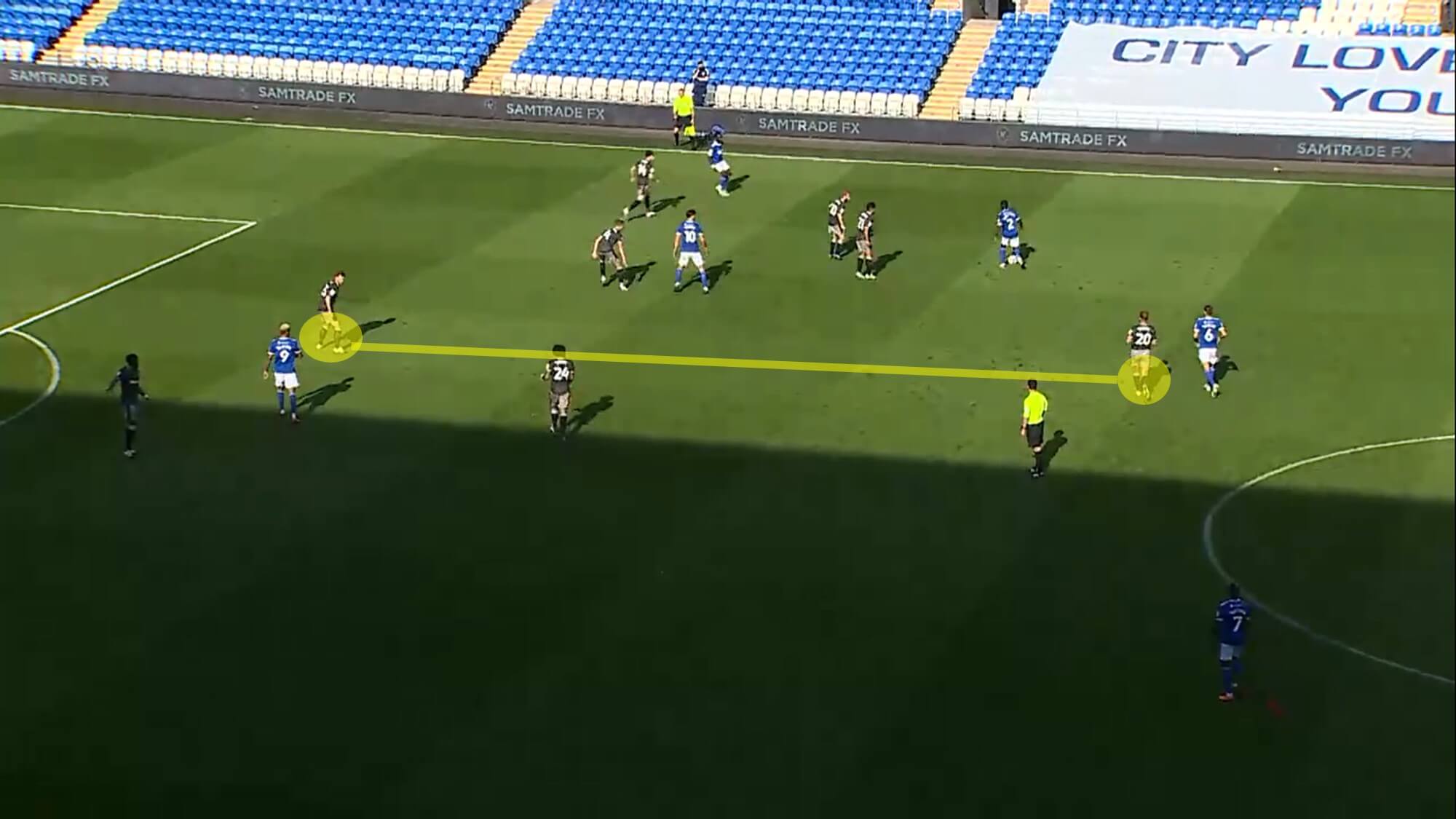 Rhodes would also be in a good position to try and launch a counter-attack if the ball became loose in that midfield area.

Wednesday matched up Cardiff man for man in that midfield area, and it worked very well. If the two defensive midfielders had the ball in deep areas, the visiting front two would stay close to them and block their passing lanes. 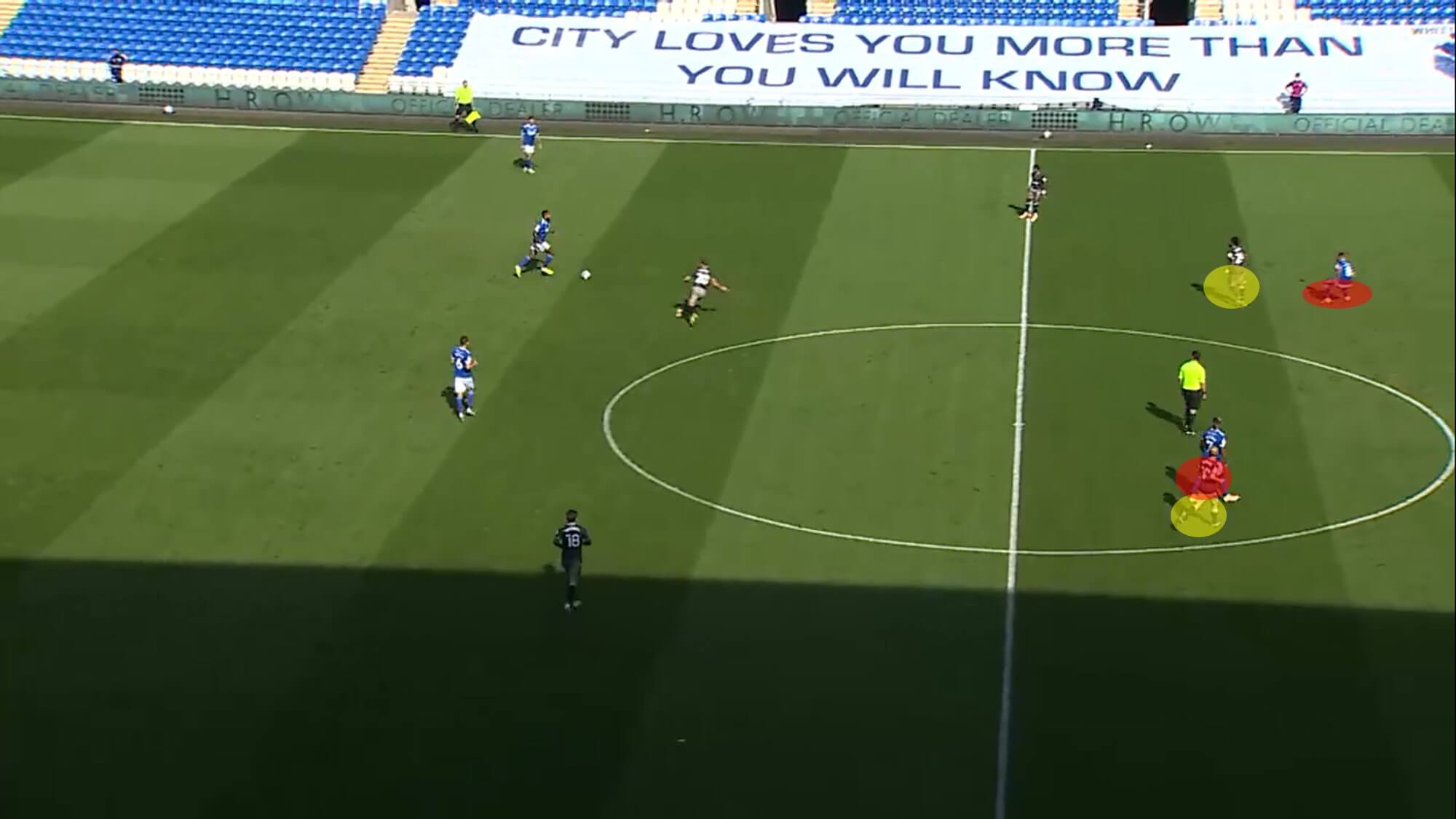 Midfielders Izzy Brown, Barry Bannan and Massimo Luongo ensured that they employed man-to-man marking in that area. Again, this meant that Cardiff struggled to play through Monk’s side, and their long passes up to Kieffer Moore were ineffective.

Wednesday’s defensive structure will be tested in very different ways by the Hornets, and the analysis will now focus on that. Whilst Cardiff were quite rigid and unimaginative, Watford are more likely to be fluid in their play, using positional rotations to drag Wednesday’s players out of position. This is how they played against Middlesbrough, and although it wasn’t always successful, their new-look front three did show promise in their first game together.

Lively teenage striker Joao Pedro put in a man of the match performance, and his willingness to drop deep and play as a false nine really disorganised the Boro defence. In the image below, Pedro drops deep to receive a pass from left-sided centre-back Ben Wilmot. 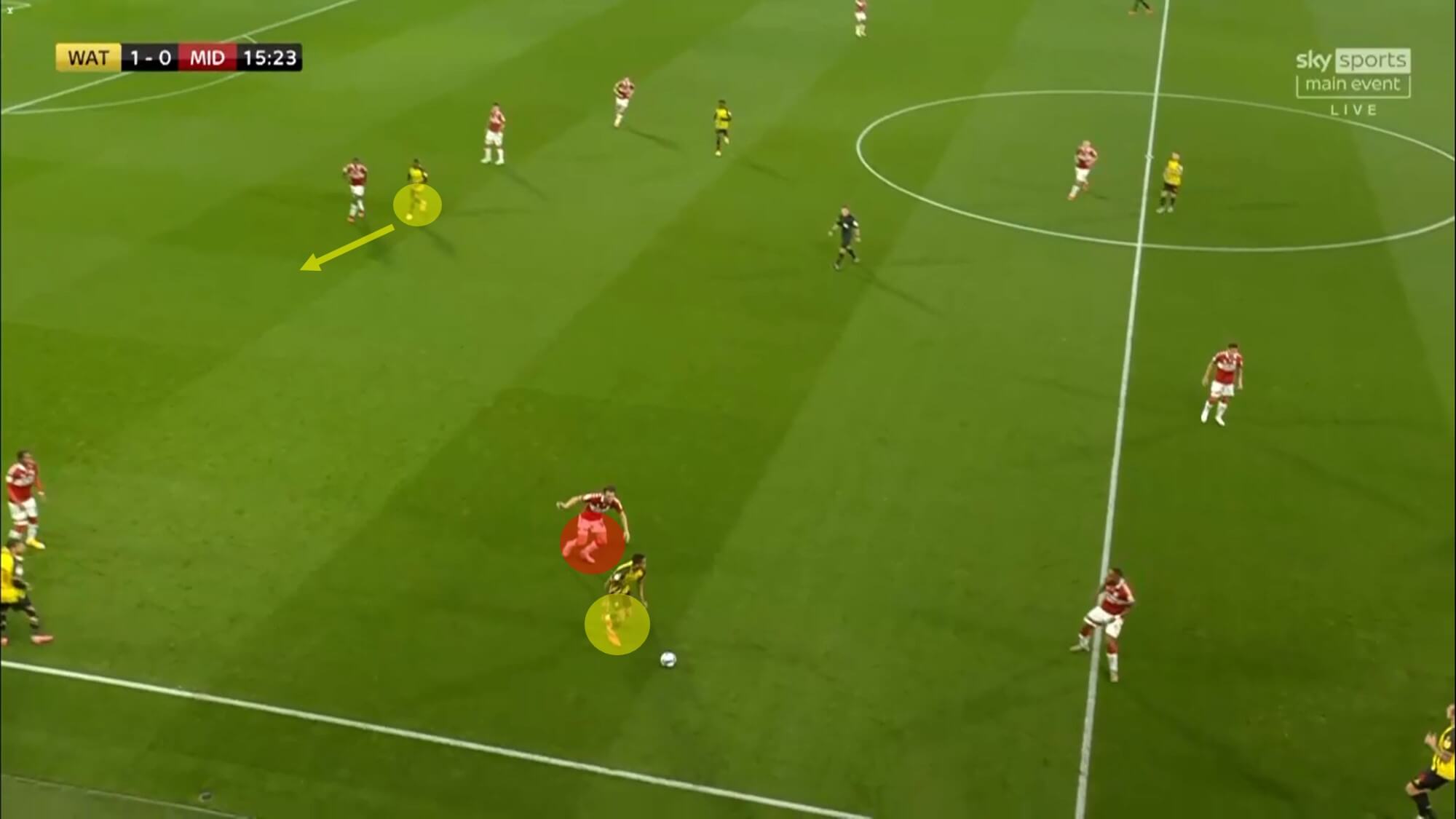 By doing this, he attracts Middlesbrough man Jonny Howson out to him. Due to the fluidity that Watford tried to play with, Ken Sema occupied the space that Pedro had left. He was prepared to run in behind if the situation arose. If Watford try to attack like this, then they should cause more problems for the Owls, as players who interchange positions are harder to pick up. In particular, Joao Pedro is someone that they’ll need to be wary of. If opponents press him too aggressively, he’s got the quick feet to take the ball past them, before attacking the space they’ve vacated. He did this to Howson in the example below. 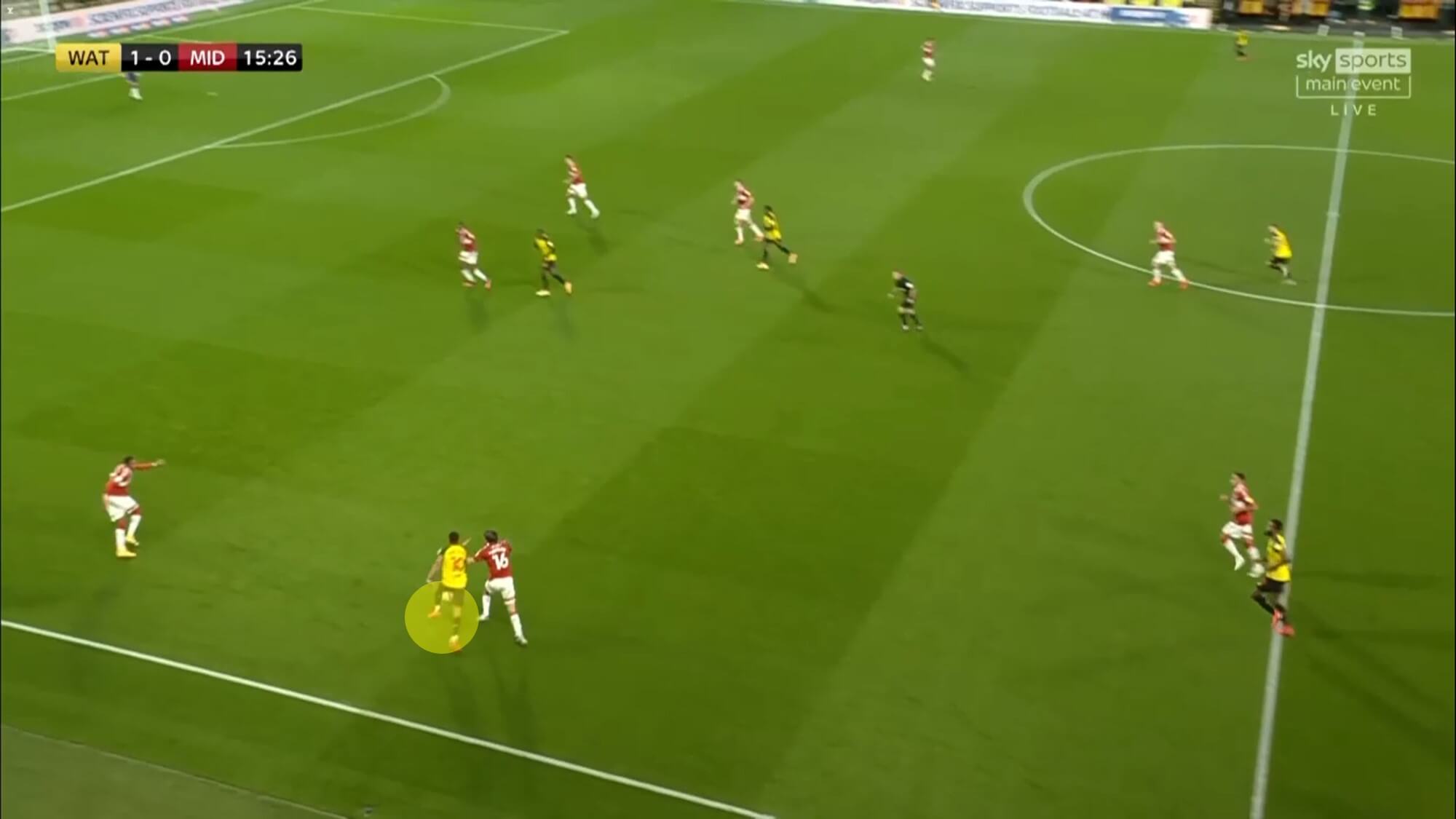 Watford’s attacking approach should be very different to Cardiff’s. Of course, we’ve only got their solitary game under manager Vladimir Ivic to judge them by so far. But they will have more of a focus on keeping possession than Cardiff did. From goal kicks, they positioned two central defenders inside the area, with Christian Kabasele standing on the edge of the area. 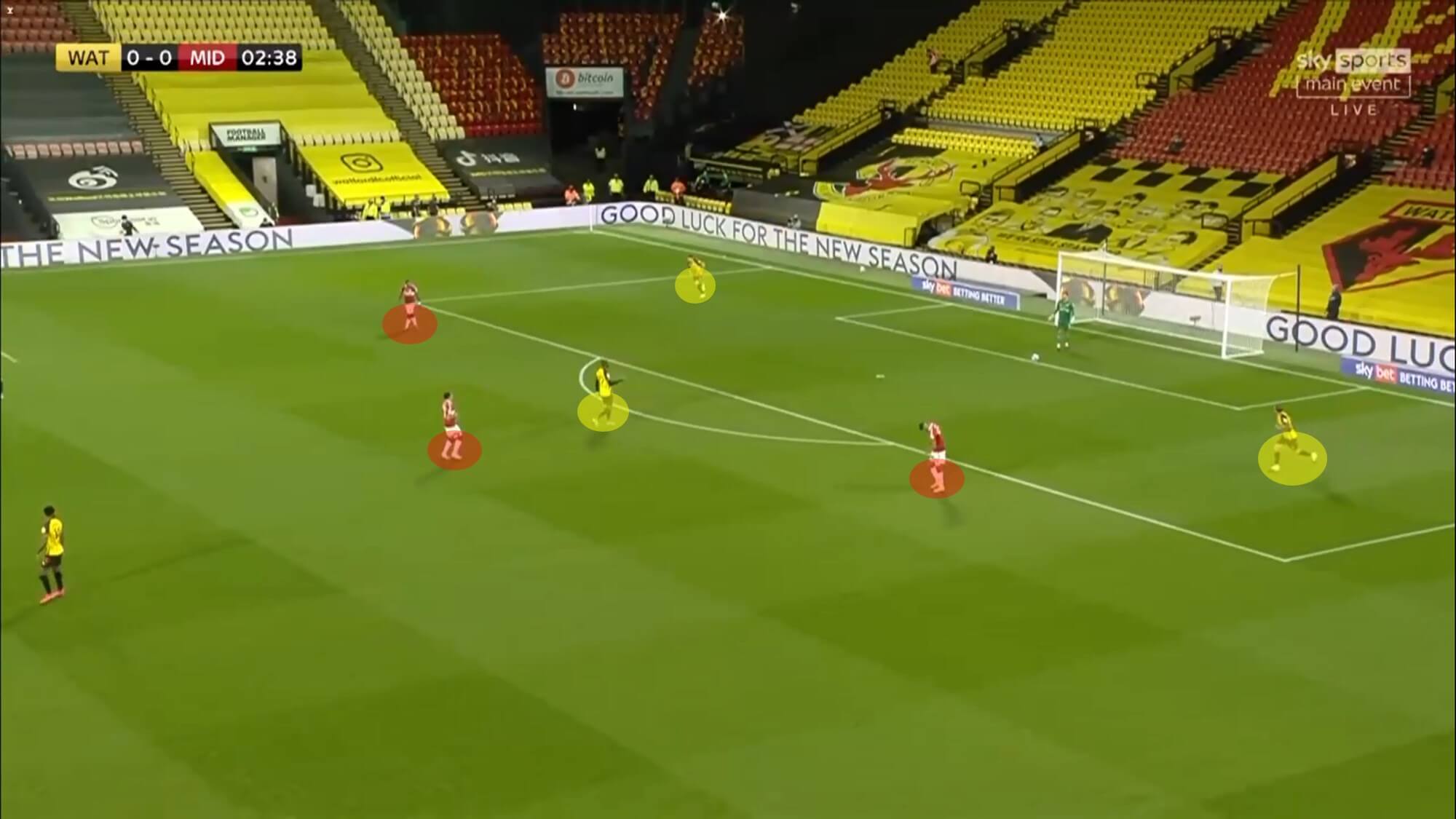 This was in an attempt to play out from the back. However, Boro did stop them from doing this. When their attacking players stepped onto the edge of the box, Watford didn’t take risks by trying to play through the press, and Foster wasn’t afraid to take long kicks. In total, the ex-England man played 18 of his 28 passes beyond Watford’s third.

In terms of ball progression, Watford tried to play line-breaking passes into the front three. They did this by emptying the midfield area and pulling Middlesbrough players out of position. The movement of central midfielders Tom Cleverley and Nathaniel Chalobah was key to that. 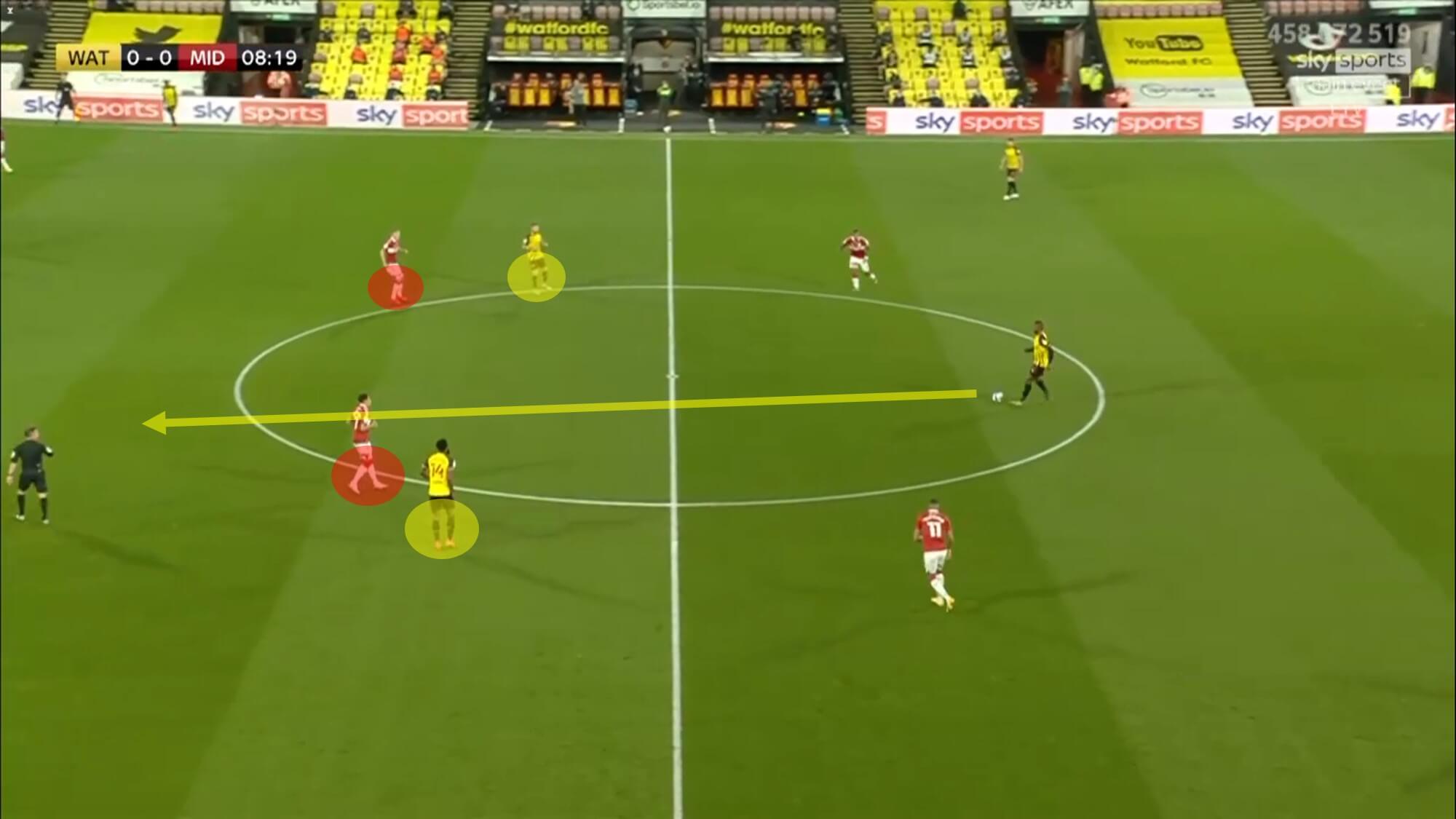 In the image above, the two Watford midfield men aren’t showing for the ball. They’re occupying positions just wide of the man in possession, Christian Kabasele. By doing this, they pin the two Boro central midfielders wide of him as well. This opens up space for Kabasele to break the lines by playing a pass into the feet of one of the Hornet’s front three. 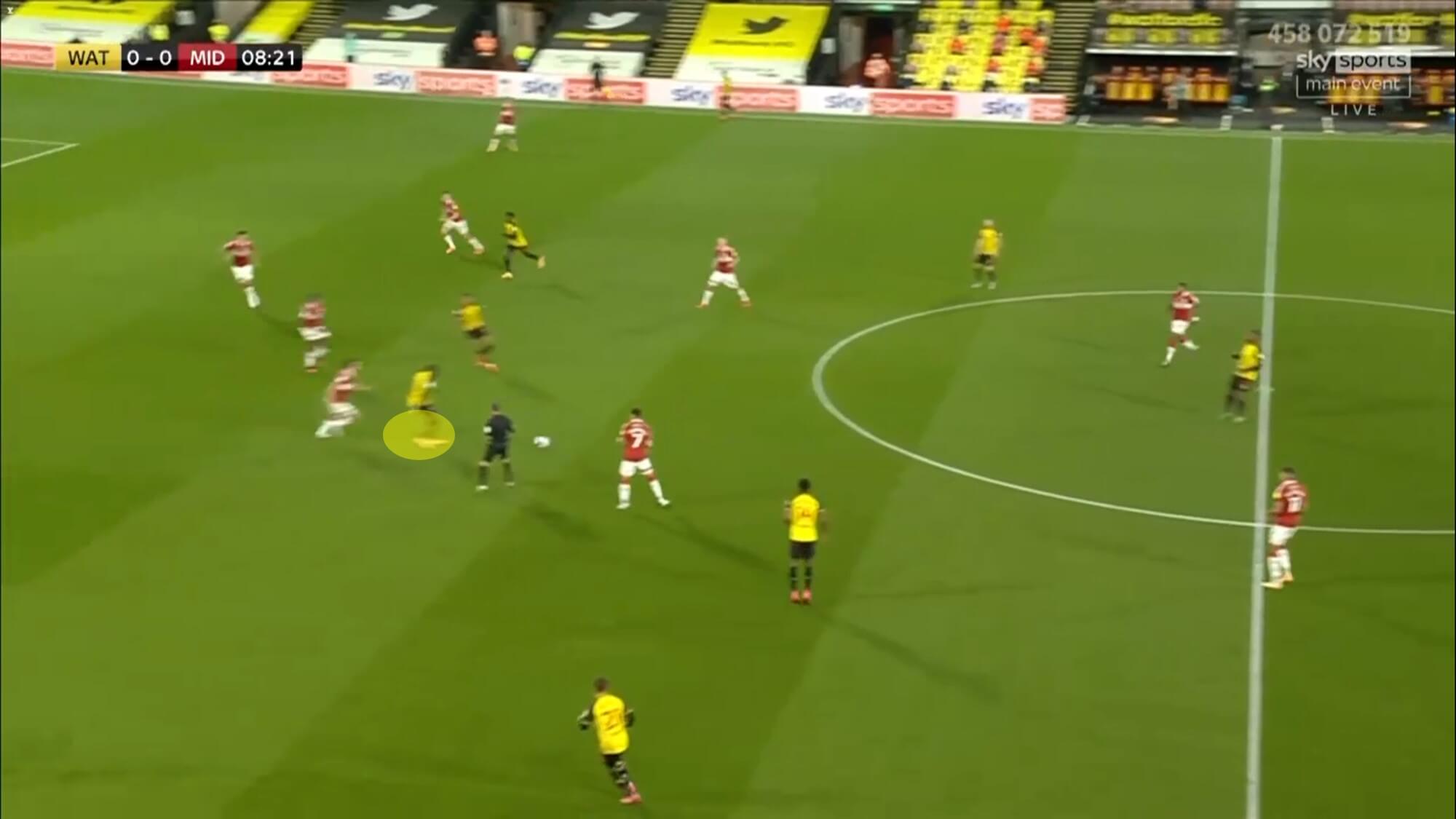 If Wednesday stick with their man-to-man marking structure in midfield, Watford may be able to create this passing option.

Will Wednesday change how they press?

Against a team who are more likely to be patient in possession, the Owls may change the way they press. Watford play a back three, which could create a problem for the Owls if they press with a front two. This is because Watford will have a numerical advantage in the build-up phase, and it’d be harder for Rhodes and Windass to stop them from playing. Take this example from the game against Middlesbrough. 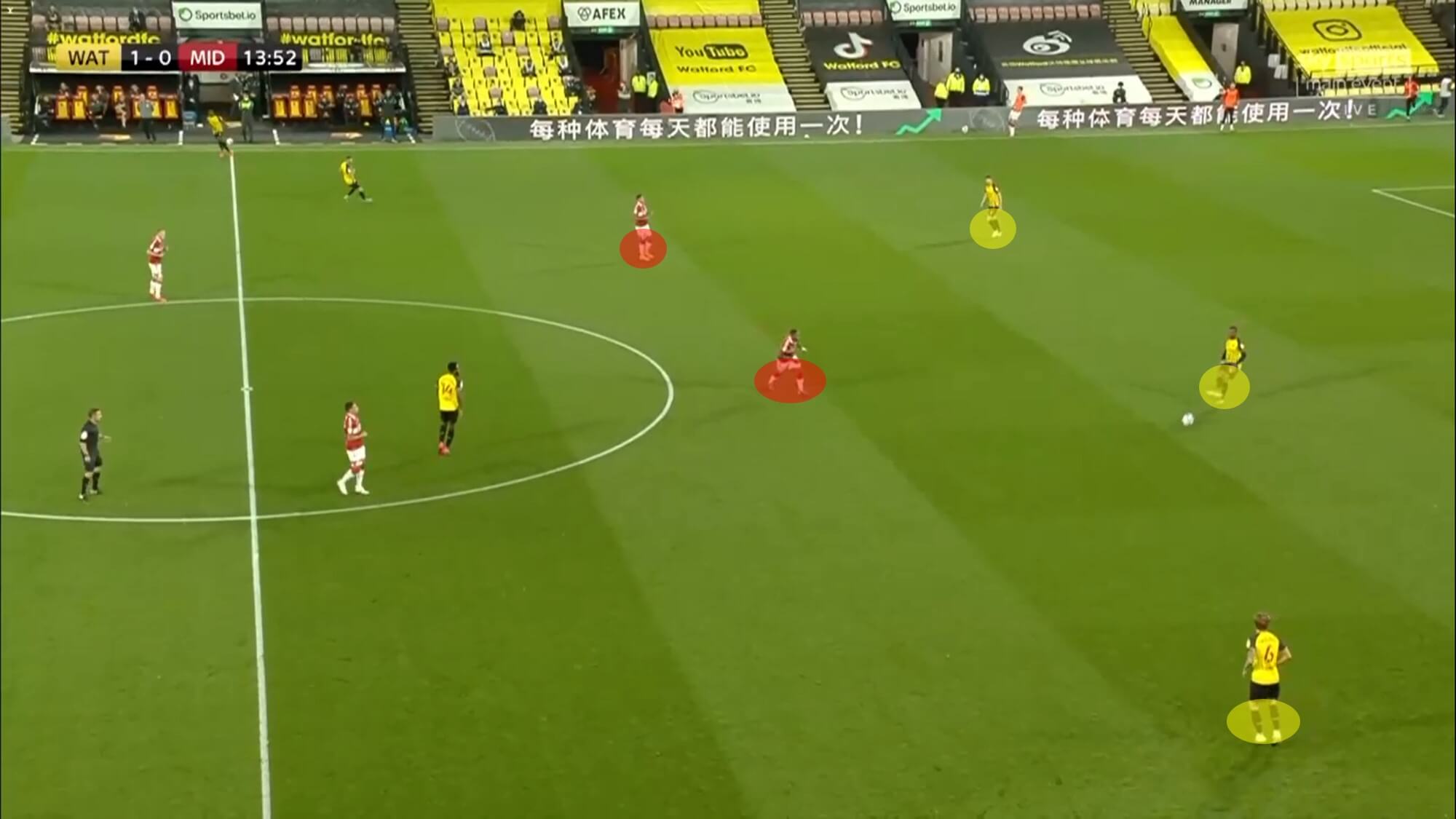 The Hornets’ wide central defenders able to split into wider positions, due to the presence of the third central defender in the middle. This means that the front two have larger distances they need to cover when pressing. In the image below, Watford easily bypass the first Boro pressing line as Ben Wilmot carries the ball forward. 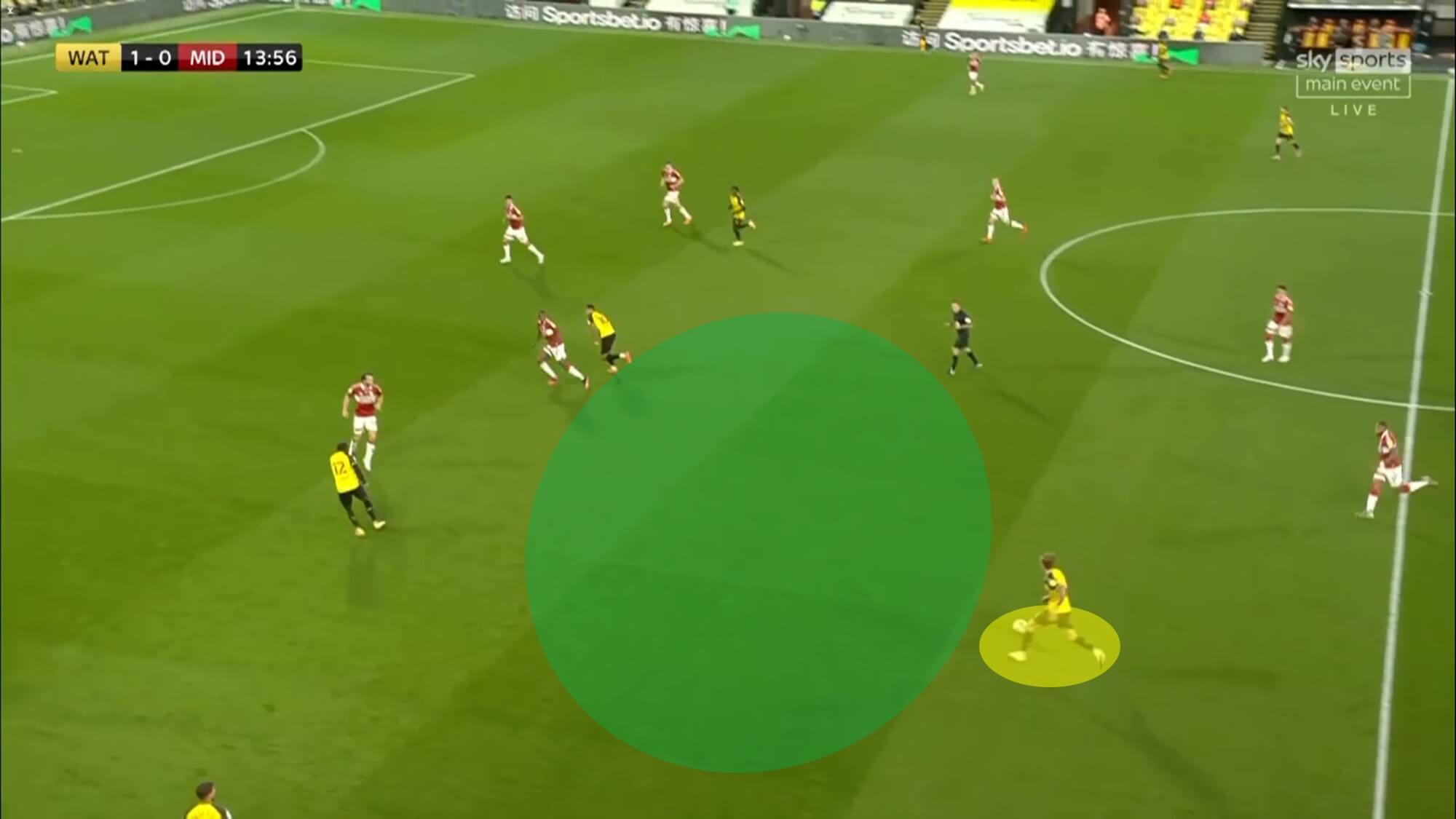 Wilmot then has plenty of time to play a pass from the left half-space. When a defender advances from this position, it can encourage a player from the second pressing lane to try and close them down. This can then leave space for the team in possession to exploit in behind them.

To make themselves harder to play against, Wednesday could press the defenders in a three, with Izzy Brown playing higher up. They did this in the next image, when they played against Leicester City in pre-season.

The Foxes dropped holding midfielder Namplays Mendy in between the central defenders, so they did build up with a back three. The central defenders have taken up wide positions, but strikers Rhodes and Adam Reach are able to press them. This is because Brown steps up to apply pressure on Mendy, so Leicester don’t have a numerical advantage in this phase.

Sheffield Wednesday looked to take advantage of quick transitions against Cardiff, and it’ll be interesting to see if they do the same against Watford. The pace of Windass in behind caused them plenty of problems. With Watford, it’s quite difficult to know how they’d defend against a counter-attacking style. Against Middlesbrough, they went 1-0 up early on and they became more cautious as the game went on. Because of this, we didn’t see how vulnerable they could be in transition. Wednesday will be hoping that they don’t suffer the same fate.

Watford have better technicians, so expect them to have most of the possession. The home side should have a physical advantage in their defensive and middle thirds. If they manage to force Watford to play long, that could play into Wednesday’s hands.

Both teams were very solid defensively in their first outing, so it may not be a classic for the neutral.