We already have reached the last round of matchdays in the FIFA Women’s World Cup group stage. Before the game, every team in Group A still had the chance to go through to the next stage. Norway was before the match in the 2nd place just behind France and before Nigeria because of their goal difference.

On the other side, South Korea still had a little chance if they could beat Norway. In light of this, the Taeguk Nangja needed to try everything to get the three points and that’s exactly what they showed on the pitch. This tactical analysis will show, why South Korea got defeated 1-2 by the Norwegian team, even though they played with a lot of energy and courage. 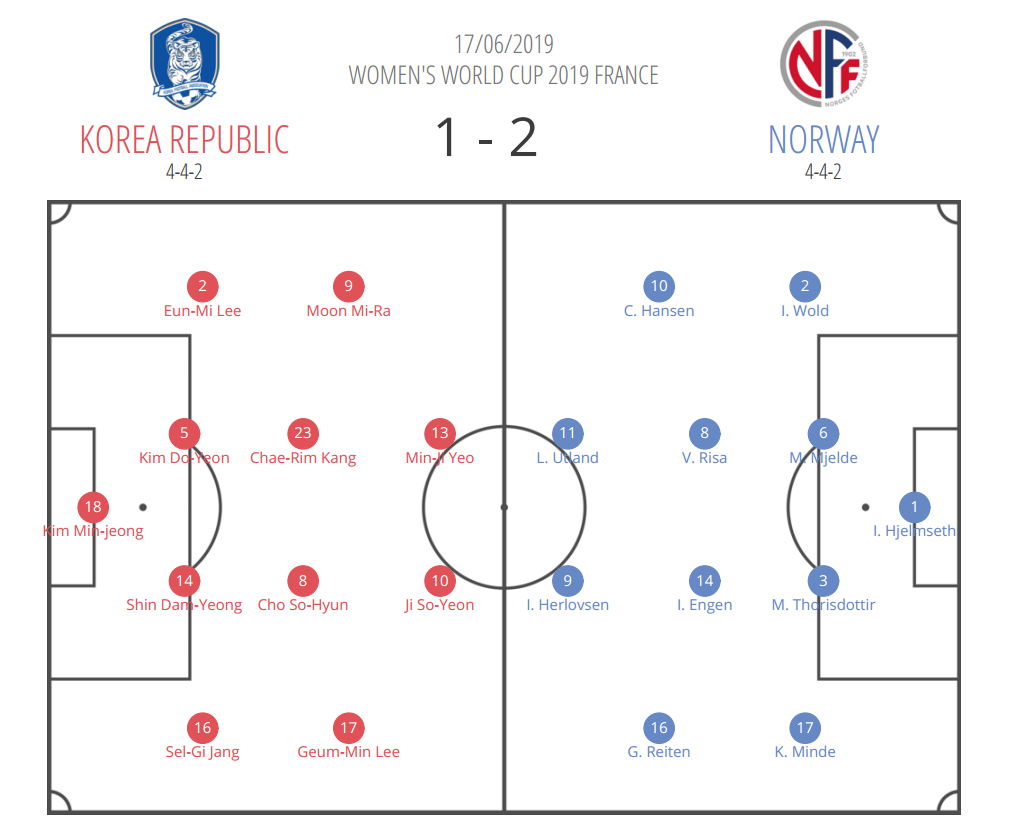 South Korea played with a flat 4-4-2 which sometimes turned into a 4-4-1-1 when one of the two strikers dropped deeper a bit. Kim Min-jeong was the goalkeeper. Eun-Mi Lee and Sel-Gi Jang were the full-backs, while Kim Do-Yeon and Shin Dam-Yeong played as centre-backs. The midfield was made of Moon Mi-Ra, Chae-Rim Kang, Cho So-Hyun and Geum-Min Lee. Min-Ji Yeo and Ji So-Yeon were the strikers.

On the other side, Martin Sjögren lined his team in their classic 4-4-2 formation with their Star Caroline Graham Hansen on the right wing. Ingrid Hjelmseth was between the sticks and the back four in front of her was made of Ingrid Wold, Maren Mjelde, Maria Thorisdottir and Kristine Minde.

How South Korea tried to get into the final third

Even though Norway was the clear favourite ahead of this match, you could expect South Korea to have more possession and goalscoring chances. As already explained, the South Koreans needed a win. On the other side, the Norwegian like to sit back deep with their narrow 4-4-2 and lure the opposition out to create spaces for counter-attacking opportunities. As you can see in the shot below, Sjögren’s side defended very deep and tried to avoid passes through the middle.

Due to their deep defending, Norway just got 38% possession after the 90 minutes. The South Koreans built up with a 4-2-4 formation. Because of the four players in the deepest line, they always had enough passing options. The two central midfielders Chae-Rim Kang and Cho So-Hyun were responsible to connect the back four and the four higher positioned players. Ji So-Yun and Min-Ji Yeo occupied the centre high up the pitch and Geum-Min Lee played on the flanks together with Moon Mi-Ra.

Although the Norwegians were positioned very deep most of the time, in some situations they also tried to press in at their opponents. They waited for a bad pass or first touch and then isolated the player on the ball. However, Dukyeo’s team solved these situations with short passes and didn’t start to play long balls. They just built up their attacks from the back with short passes.

As soon as they got into half of Norway, the often used long diagonal passes to get around the compact formation of Norway. Since they shifted so disciplined to the according side where the ball was located, South Korea had enormous space on the opposing side. Considering this, the long diagonal passes were perfect to get into these zones.

After that, when they get into the wide areas, they tried to cross the ball into the centre. They were really successful in creating these situations on the flanks. However, they almost never got goalscoring chances out of it. It only happened one time. That was before their goal in the 70th minute when they scored the 1-2. In almost every other situation, there were not enough players in the centre or they were in wrong positions like in the image below.

Pressing in at Norway

Since South Korea needed the three points and after the converted penalty of Graham Hansen in the 4th as fast as possible a goal, they tried to give Norway no chance to build up from the back. Norway’s style of play will be explained in the following paragraph. However, generally, they want to have an organised build-up with good ball circulation and short passes. South Korea wanted to destroy this build-up and force them to long balls.

To achieve that, they pressed in at their opponents very man orientated. Everyone in Dukyeo’s team had to mark one opponent while one put pressure on the player in possession. Due to that, Norway’s players had no short passing lanes and were forced to play long balls. These uncontrolled long balls were easy to defend for South Korea’s defenders.

In addition, they used a very effective counter-pressing. As soon as they lost the ball, they used a similar method to the one that Norway used in some situations. They isolated the player in possession and put pressure on him. In the image below Norway wins the ball and Herlovsen gets immediately isolated from the rest of her team. She’s surrounded by five opponents who can win back the ball.

Sjögren’s team used their usual way to build up. Their main goal is to come into good positions into the wide areas to deliver crosses. They generally form kind of a 2-2-5-1. The two centre-backs, as well as the two central midfielders, started with the build-up. The two wingers Graham Hansen and Reiten tucked in to occupy the half spaces and so the full-backs Minde and Wold could position on the wings. In addition, one striker dropped a bit between the two wingers who shifted in.

Graham Hansen, the star of the team, was very central to the Norwegian build-up. They often tried to find her between the opposing lines in the half-space from where she could either start dribbling or bring the right-back Wold into a crossing position.

However, since South Korea pressed in at them so well, they were almost never able to have an organised build-up to create chances. But, because of two penalties, they were able to score twice and get the win even though South Korea dominated them.

Even though South Korea dominated the game and pressed in at Norway very well, they weren’t able to get something out of the match and so they got knocked out. On the other side, Norway is through to the round of 16.

However, if they play like this in the final stage of the tournament, it will be hard for them. But it will be interesting to see how they’ll perform in the upcoming matches.