With their top four chances hanging by a thread, Manchester United were desperate for a Premier League win against Huddersfield last weekend. Ole Gunnar Solskjær‘s men were winless in their last four games, dropping points against Chelsea, Manchester City and Chelsea in the Premier League and failing to beat Barcelona in the Champions League.

An already relegated Huddersfield looked like a great opportunity for Manchester United to get back to winning ways. But The Terriers wanted to give the Kirklees Stadium faithful a proper Premier League sendoff.

This tactical analysis will breakdown the game’s key players and how Manchester United failed to capitalize on the chances they created. 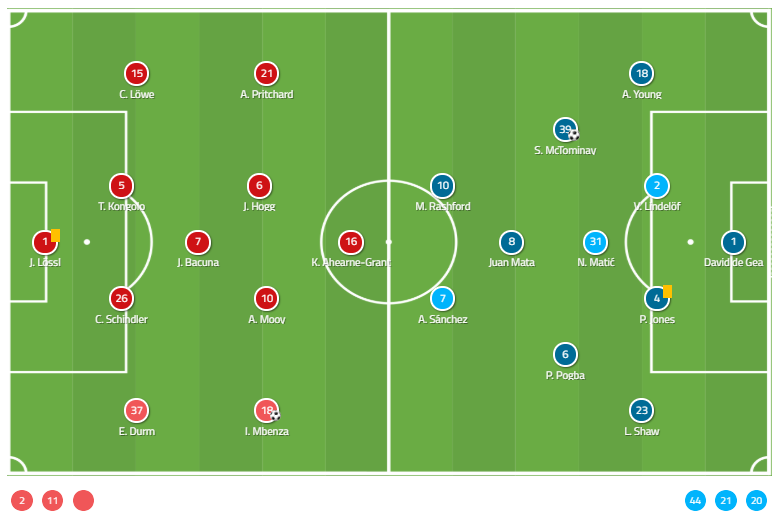 Huddersfield started the game in a 4-1-4-1 formation, making three personnel changes from their 5-0 defeat at Anfield. Chris Löwe came into the squad ahead of club captain Tommy Smith. Löwe started at left back, pushing Erik Durm to right back. Aaron Mooy started over Jon Gorenc Stanković moving Juninho Bacuna to the holding midfielder role. Alex Pritchard started over striker Steve Mounié but played as a left midfielder. Karland Grant started up top for Huddersfield despite playing on the left against Liverpool.

Manchester United also made three personnel changes while retaining their 4-4-2 with a diamond midfield formation. A leg injury forced Eric Bailly out of the lineup, allowing Phil Jones to start alongside Victor Lindelöf in central defence. Solskjær opted to drop Ander Herrera in favour of Manchester United’s player of the month, Scott McTominay. Another injury saw Romelu Lukaku dropped from the lineup in favour of Alexis Sanchez. Out of form David De Gea retained his spot between the goalposts.

In typical fashion, Manchester United looked threatening in the first 15 minutes of the game. A good passing movement and a bit of fortune saw Scott McTominay open the scoring for United. As the game progressed, however, Huddersfield looked much more comfortable defensively.

During his celebration, Mbenza kicked down the corner flag. And as the white flag floated to the floor it symbolised Huddersfield’s denial to surrender, despite having their Premier League fate sealed weeks earlier. The game finished 1-1.

Many critics have attributed poor defending to Manchester United’s poor string of results. But with five goals in their last eight games, Ole Gunnar Solskjær will be pointing the finger at his attackers as well.

Throughout the match, Manchester United had 23 shots. Of these 23 shots, only seven tested Huddersfield goalkeeper Jonas Lössl. Nine of Manchester United’s eventual shots were off target. Two hit the woodwork and seven were blocked. Scott McTominay will consider himself lucky, given that his goal was shot relatively close to the goalkeeper as well.

And while this suggests that Manchester United’s finishing has been abysmal, it also suggests that they are creating chances. Of United’s 23 shots, 12 were inside the 18-yard box.

As a result, Solskjær may search for a natural finisher during the summer transfer window. Alternatively, Mason Greenwood could be a welcome promotion from the youth team. Regardless, Manchester United need to be more clinical next year if they want to push into the top four, let alone challenge for the title.

Although Manchester United attacking was a large contributor to their downfall, Jonathan Hogg played an important part in Huddersfield’s success. The English midfielder made six successful tackles and three interceptions throughout the game.

Hogg’s defensive positioning and aggressiveness helped him keep Paul Pogba quiet throughout 90 minutes. As soon as Pogba received a pass, Hogg pressed him instantly. We can see this in the following images. As the pass comes in from Phil Jones, Jonathan Hogg presses Pogba.

Hogg’s pressure results in a misplaced pass from Pogba that for a Huddersfield throw-in.

Two minutes later Luke Shaw heads the ball into Paul Pogba. Hogg once again anticipates the pass and presses Pogba. Unable to turn, Pogba is forced out wide where Hogg makes the tackle.

Even while teammates marked Pogba, Hogg was able to anticipate the Frenchman’s play. In the 17th minute, Paul Pogba turns past his marker to restart the play.

As Pogba turns his man, he takes a heavy touch into space. Hogg goes into the tackle and wins the ball. Unfortunately for Hogg, the referee deemed it a foul. Despite giving away a freekick, it showcased another instance of Hogg’s defensive efforts.

Hogg did well to keep the Manchester United midfield quite. Paul Pogba had little impact on the game, much to the credit of Hogg.

One of the only redeeming outcomes for Manchester United fans was the introduction of Tahith Chong. The Dutch forward is one of United’s most promising youngsters, and it showed during his 40 minutes of action.

When he replaced Alexis Sanchez, Chong added energy and pace to the United attack. His passing and dribbling impressed, but his attacking vision was his most impressive quality. On countless occasions, Chong drove into space to receive the ball. His movements not only provided an outlet for his teammates but moved the Huddersfield defenders.

Right from the get-go, Chong looked to exploit the free space in wide areas. When the midfielders behind him received the ball, he would drive into these spaces. In contrast, Alexis Sanchez made runs towards the ball carrier to pick up the ball between the lines. This was ineffective and the change added a different dimension to Solskjær’s attack.

The following images show the positioning of both Sanchez and Chong throughout the game. Sanchez’s heatmaps indicate a high presence on the left side of the mid-third of the field. He rarely wandered over to the right side.

Tahith Chong exploited the space made for him, holding up the ball well in the box. The following images show Chong receiving the ball in Huddersfield’s 18-yard box. The youngster capitalises on Huddersfield’s lack of concentration during a Manchester United throw-in, and bursts into the empty space.

As he receives the pass he holds the ball up well. Unfortunately, the lack of support from his teammates forces Chong out wide where he loses the ball.

Chong was quick to make forward runs on the transition too. He wasn’t afraid to commit forward, trusting his teammates to find his run. We see an example of this in the following scenario. As Paul Pogba receives the ball in the midfield, he turns to start the attack.

As soon as Chong sees Pogba beat his man on the turn he explodes into space. Chong proceeded to dribble at the Huddersfield defenders, eventually feeding the ball out wide to the right side of the midfield.

The result means that neither Manchester United or Huddersfield have anything to play for but pride in their final game of the season. Next week Huddersfield play their last Premier League match for the foreseeable future as they travel to Southampton.

Manchester United face their second relegated opponent in as many weeks as they host Cardiff City. Solskjær’s team are due for a win and need a win against Neil Warnock’s Bluebirds to redeem help redeem the end to their campaign.