The narrative in North London is slowly starting to shift. For at least the last three seasons Arsenal have been seen as ‘soft’ and lacking in the ability to dig in when they need a result in tough matches. On the other side of North London, however, Spurs have been the resilient and streetwise neighbours with the ability to win close matches when their backs are against the wall.

This season though with the Spaniard Unai Emery in charge we are seeing a different side to Arsenal. It is one that they certainly lacked during the final years of the tenure of the French coach Arsene Wenger, with their willingness to work and fight in order to force a positive result. This was certainly the case here where the home side went 1-0 down in the second half before quickly fighting back and finding an equaliser. The goal itself was a clear example of what was discussed above. There was fight and tenacity but it was combined with subtle, technical brilliance as French striker Alexandre Lacazette found a way to goal.

One key change in the Arsenal midfield this season appears to have been the catalyst for this shift in mentality. This is the introduction of the Uruguayan midfielder Lucas Torreira, signed from Sampdoria in the summer. Despite his small stature, he has quickly made a significant difference to his teammates and for Arsenal’s regular fans. With Torreira as part of a double pivot in midfield with Granit Xhaka there is a sense that the attacking players finally have a platform from which they can perform going forwards. 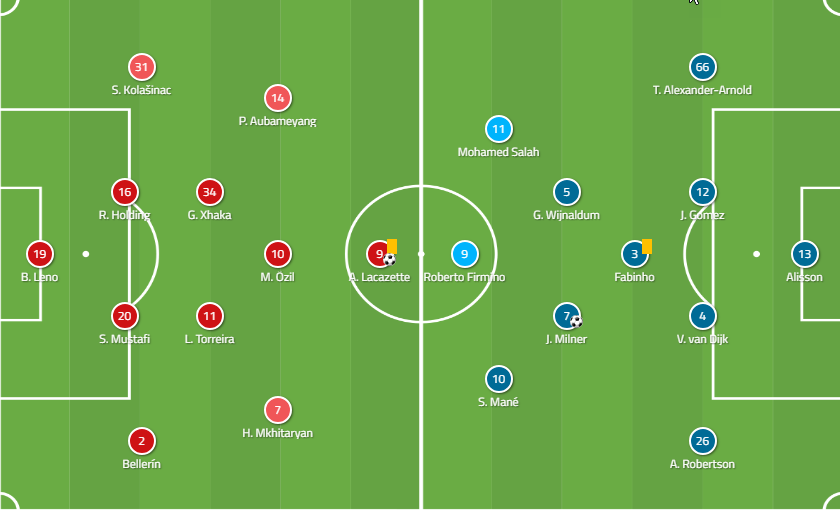 In this match we saw Arsenal continue in their 4-2-3-1 shape that we have seen Unai Emery prefer in his time at the club. German goalkeeper Bernd Leno was again preferred over Peter Cech. Indeed, Leno feels like a better fit to the proactive playing style that Emery prefers. The central defensive partnership seemed slightly makeshift with Rob Holding partnering the German international Shkodran Mustafi.

At the base of the midfield Lucas Torreira continues to hold his place as part of the double pivot with Granit Xhaka.

Ahead of the midfield duo, Pierre Emerick Aubameyang continued to play from the left side of the attack as Alexandre Lacazette keeps his pace leading the line as the lone striker.

Under the long tenure of Arsene Wenger at Arsenal the club developed a reputation for playing some of the most forward thinking and attacking football in Europe. There was, however, always a pay off for this attacking style. That came in the defensive phase where Arsenal have struggled for some time to play in a manner that befits a side with ambitions to challenge for titles.

This season so far, however, we have seen a more resilient defensive structure from Arsenal. This was evident throughout this match when they were faced with a side that possesses the attacking threat of Liverpool. 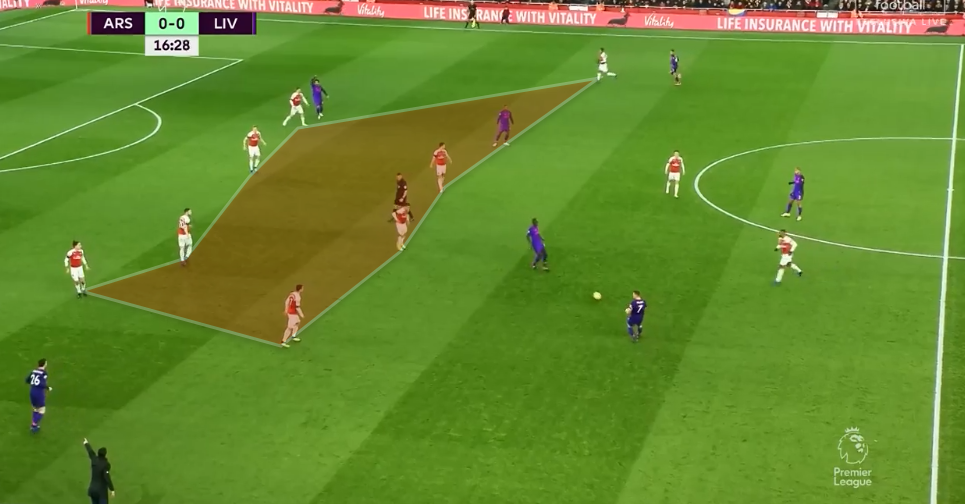 Here we see Liverpool looking to build up from the midfield area. The first thing to take notice of is Arsenal’s defensive block with two banks of four behind the ball. On the far side of the field, however, we see that Aubameyang has dropped in to join the midfield line of the block. This is not an altogether normal aspect of the defensive structure for Arsenal. The Gambian forward prefers to stay high on the field in an area that allows him to receive the ball quickly when Arsenal look to transition to the attacking phase.

What is also interesting to note from this example is that the midfield three from Liverpool are all positioned in front of the Arsenal defensive block. None of the three are looking to occupy spaces in between or behind the first line of the Arsenal defensive structure. As such, the only option for Liverpool to progress the ball is to use the fullbacks in the wide area or try to play a low percentage ball through to the front three.

Neither Fabinho, Wijnaldum or Milner, the midfield three for Liverpool, possess the aptitude to take up advanced areas of the field in possession for Liverpool. 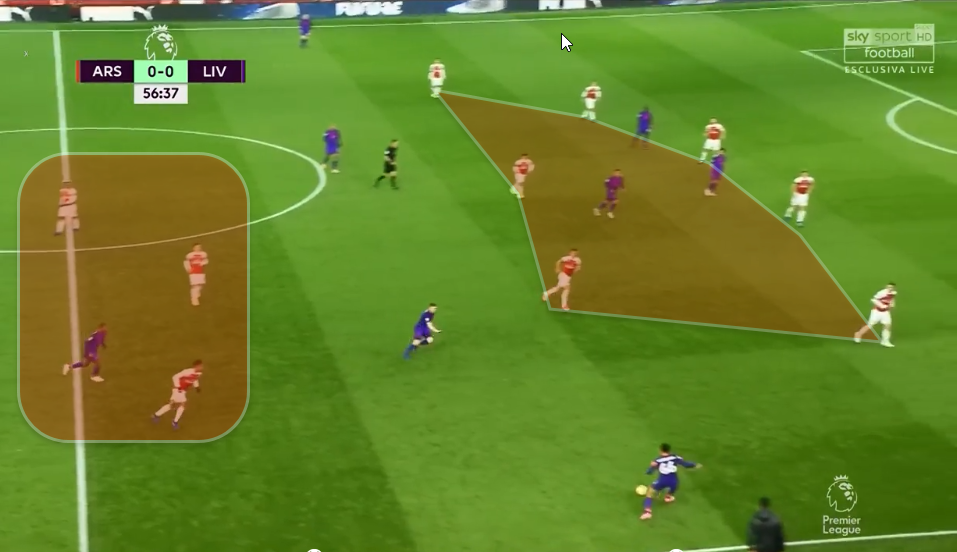 In this example, we can see more clearly the 7+3 defensive orientation from Arsenal. Once more we see Liverpool looking to progress the ball forward with the ball out on the near side.

We see Sadio Mane, Roberto Firmino and Mohammed Salah narrow in the attacking third as they look to force an overload situation against the Arsenal backline. This time Aubameyang is in a high area alongside Ozil and Lacazette waiting for the moment of transition for Arsenal. Once again though the midfield three for Liverpool are playing too deep to be effective in the final third.

In using Pierre-Emerick Aubameyang and Henrik Mkhitaryan as nominal wide players in the attacking structure there is an understanding that they will have to find alternative ways to provide width in the attacking phase. The Armenian international Mkhitaryan is the more natural in the wide areas of a 4-2-3-1 but he still has a tendency to operate more in the half-spaces. On the opposite side, whilst Aubameyang did start his career with Milan as a wide player, he still very much plays as a forward player and drifts into central areas in search of goalscoring opportunities. 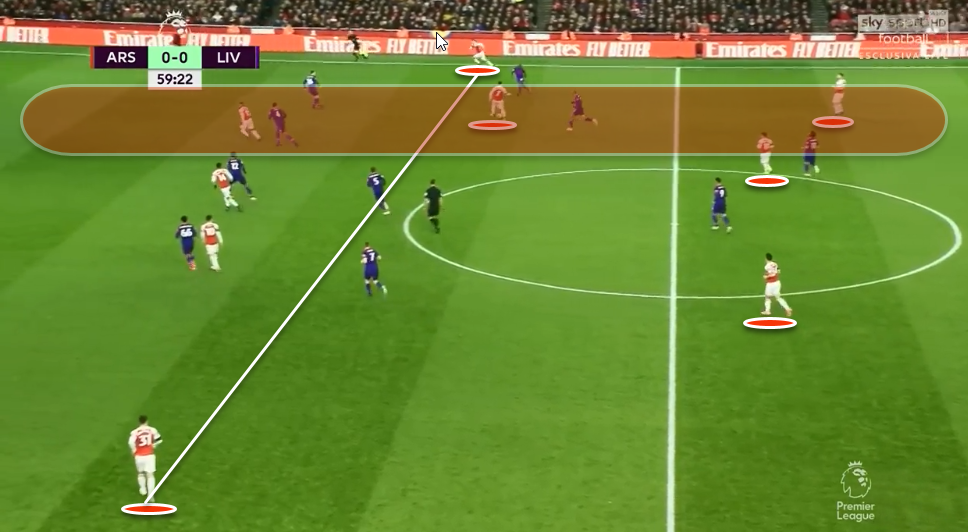 This movement by the fullbacks is made possible by the double pivot at the base of the midfield for Arsenal providing a platform from which they can attack. 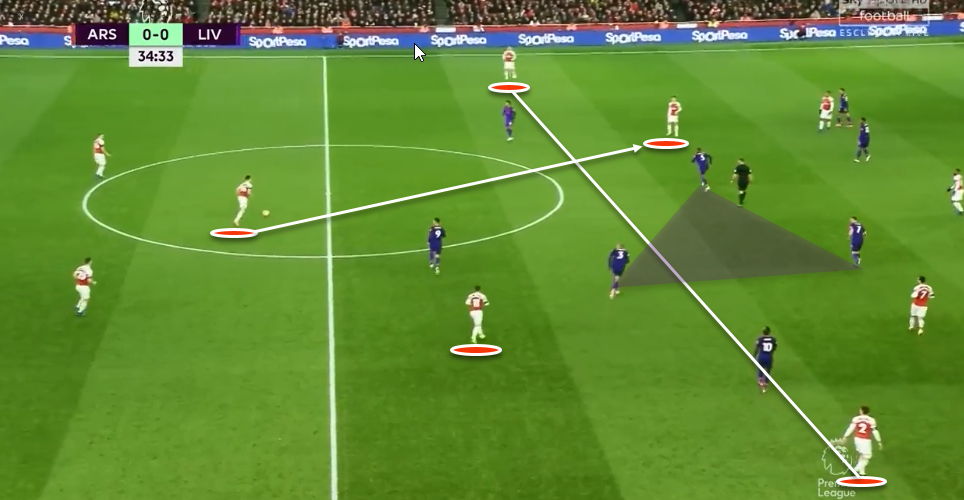 Once again here the key to providing width comes from the two fullbacks who move up to the edge of the final third. Incidentally, you can once again see that on the near side we have Henrik Mkhitaryan in a half space position.

It is here that we see a key difference between the attacking style of the two sides in the match. Whilst we have already seen that the three Liverpool midfielders maintained a deeper position in the attacking phase, we can see here that Arsenal are more willing to use positional structures to penetrate the final third. Mesut Ozil is playing as a ’10’ but his intelligence sees him dropping into areas of the field on the same line as Mkhitaryan on the opposite side.

This allows Arsenal to find passing lanes into the central areas of the final third as they built their attacks.

Whilst in the Premier League teams like Liverpool and Manchester City are well known as side who press aggressively when out of possession, that does not mean that other sides in the league also using pressing in an intelligent manner. In this match, the speed that Arsenal pressed against the Liverpool midfield in particular was hugely impressive. 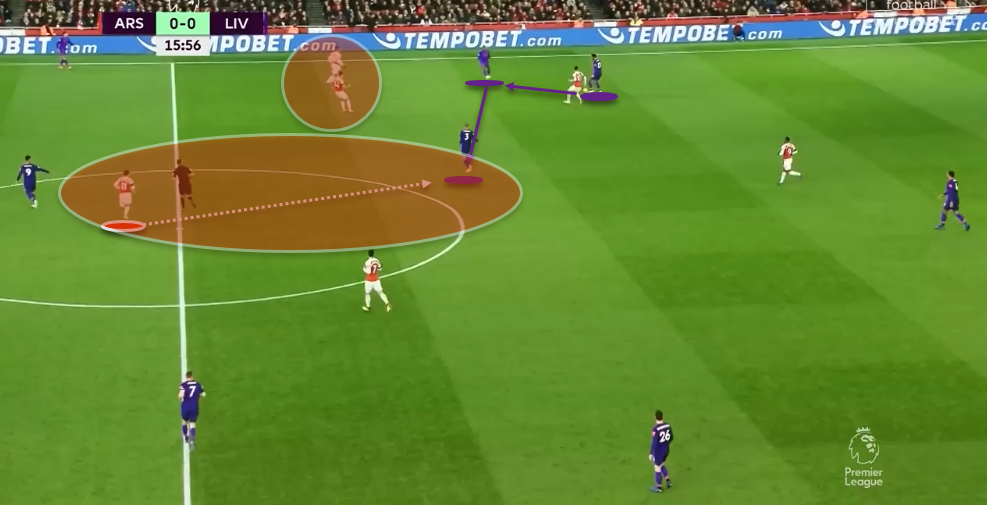 In this example we can see that Liverpool are looking to progress the ball forwards, initially on the right hand side. The wide area is blocked, however, leaving no passing lanes to move the ball higher on that side.

Instead the ball is switched back inside to Fabinho. Initially when the ball is played back inside, it looks as though Fabinho has the space to turn and move easily. Instead, though, Lucas Torreira closes the gap in the centre of the field and wins the ball quickly and easily.

In the end this was an enthralling match between two sides with contrasting styles of play. Liverpool were impressive as always, both in the attacking and defensive phases of the game. However, they were matched stride by stride by an equally impressive Arsenal side.

There is a definite sense that in Lucas Torreira Arsenal now have a player that can provide the heartbeat of this new look team. It is difficult to dispute that these two teams will be competing for Champions League qualification at the end of the season.

‘The King is dead, long live the King’. This traditional proclamation of the transfer of royal power, upon the death […]

The North London Derby had a very different setting this time, with both Arsenal and Tottenham not having great seasons. […]