When it comes to youth development and attacking football there are two sides within European football who would come at the top of any conversation, Ajax and Benfica. This week saw the two sides meet in Group E of the Champions League.

The path that both sides have taken to reach this stage in recent years, however, has been anything but smooth with the home side, Ajax, going through something of a crisis of identity linked as it always seems to be to the late and great Johan Cruyff. There was a time, around a decade ago, that Ajax as a club was in danger of becoming unrecognisable and separated from the values that had made them the standard bearer of youth development over the years. This led to an intervention from Cruyff along with his ‘technical heart’ of former Ajax players who looked to rebuild the club from the foundation phase up. What we are seeing now, under the coaching of Erik Ten Hag, is the culmination of that rebuilding with young players finding pathways to the first team and playing a brand of football that is synonymous with the Ajax way.

Benfica has undergone a similar shift in philosophy although only over the last five or so years. Traditionally when it came to youth development in Lisbon and indeed in Portugal Benfica played second fiddle to their city rivals Sporting. That is something that has started to change with the introduction of the Caixa Futebol Campus on the outskirts of Lisbon. Now, as opposed to signing ready made talents from South America and Eastern Europe before selling them on for a profit Benfica are turning their attention inwards and that is beginning to show with Benfica academy graduates starring at every level with the Portuguese national team.

What followed was an enthralling match between two sides that look to play football with attacking purpose. 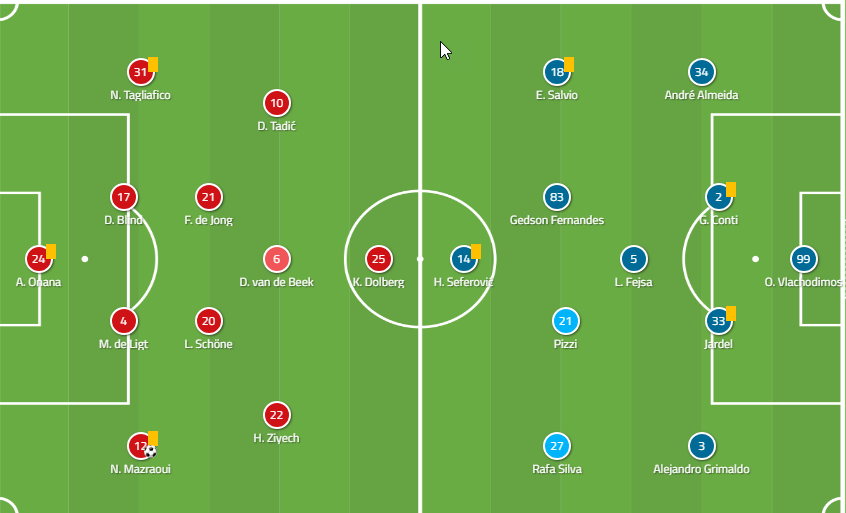 We saw Ajax lineup largely as expected with Ten Hag continuing to use the Moroccan international Hakim Ziyech wide on the right whilst the Serb Dusan Tadic continues on the left. This move of Ziyech from the central ‘8’ role has left David Neres relegated for the bench but it has created space in the centre for Lasse Schone, Donny Van De Been and Frenkie De Jong to operate in the midfield.

In attack, the Danish forward Kasper Dolberg has firmly re-established himself as the first choice at Ajax following a period out with a significant injury.

It was a surprise to see Benfica go with the German goalkeeper Odisseas Vlachodimos in goal. Other than that though the team news was as expected. All eyes would be on the central midfielder Gedson Fernandes as the 19-year-old is the latest graduate of the Benfica academy to take the Portuguese game by storm.

Ajax plays in a style and with a series of mechanisms that are almost immediately identifiable as Ajax-esque. They look to build up through the thirds of the pitch slowly applying pressure to their opponents before getting to a stage that they have positional and numerical superiority in key areas of the final third, as soon as this is the case they play through quick combinations in order to create goalscoring opportunities.

That their style of play in the build-up phase is known by their opponents is one thing but stopping them from playing through your defensive block is something else altogether. Ajax are so well drilled in playing from the moment of transition from defence to attack, whether through the goalkeeper or after a turnover in possession, that the patterns of movement and ball progression are set in muscle memory. With that said however in this match we saw Benfica set up a defensive block and organisation that made it at least more difficult for Ajax to progress the ball. 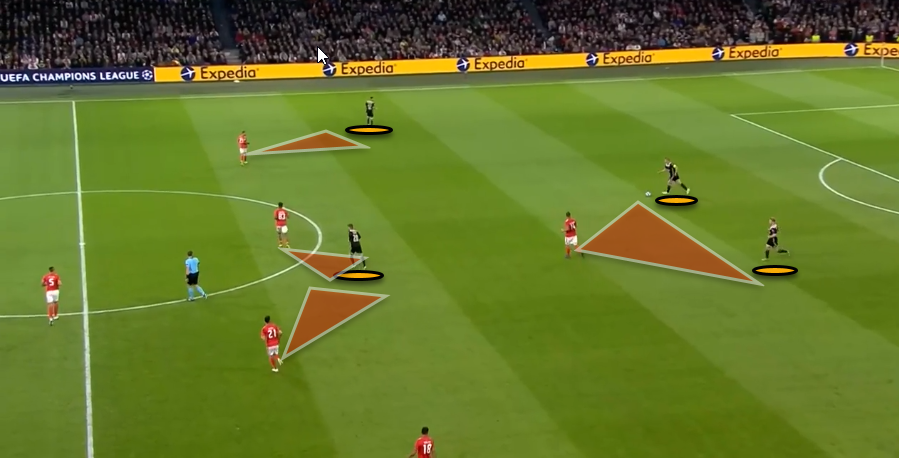 Both of the Ajax central defenders, Matthijs De Ligt and Danny Blind, are more than capable of playing with the ball at their feet but Ajax tends to look first of all for the controlling midfielder or the ‘6’, in this match Lasse Schone.

The idea of playing the first pass from the central defender to the controlling midfielder is to draw the opposition midfield players in towards the ball before it is then bounced back to a central defender or turned out towards the fullback. This second pass will then find the opposition having pressed forward to engage the ball and there will, therefore, be spaces in behind them that can be exploited.

Benfica, however, used their two central midfielders, Gedson Fernandes and Pizzi, to cover the pass into Schone. This slowed down the initial build-up from Ajax and forced the Dutch side to create alternative passing structures. 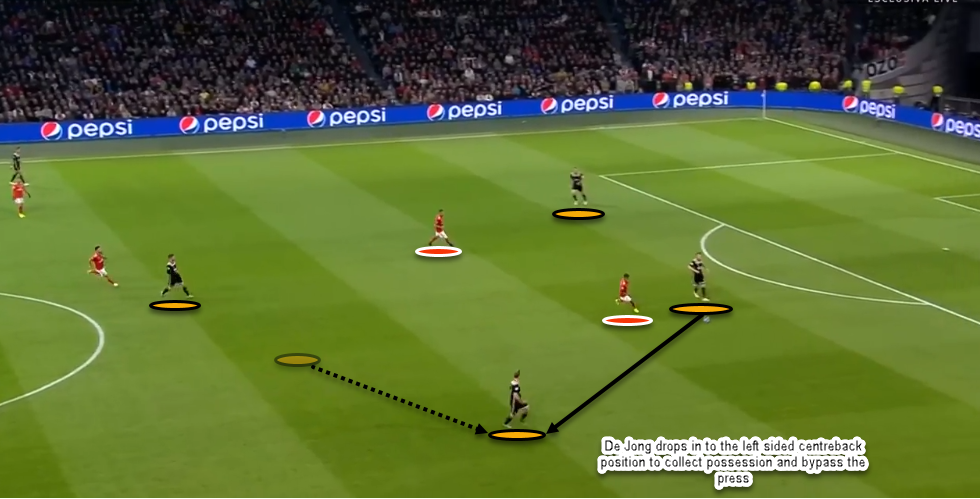 This is the first alternative pathway that Ajax began to construct in building up. We would see Frenkie De Jong drop from the central midfield strata into the half space on the left side of the defensive line. This movement from the young Dutch international allows him to collect possession in space around the initial defensive block from Benfica. He would then be able to turn and either drive forward with the ball at his feet or pass forwards into space.

This was a second method that Ajax used several times in order to progress the ball forwards into the Benfica half of the field. With Danny Blind in possession in the left centreback position, we see that Pizzi is again tracking Schone closely. The Danish international midfielder is aware of this and he makes a move away from the central area in order to drag the Benfica player out with him. As soon as this movement is made an advanced midfielder for Ajax drops in unchecked to take possession of the ball and turn towards the Benfica half.

The way that Ajax were able to adapt to the defensive structure of Benfica and come up with alternatives instead of simply resorting to playing long speaks volumes of how well coached they are.

Spacing is a concept that is more prevalent in Baseketball, it relates to the positions that players take up in possession to allow for the ball to be circulated and to create isolations and one on one matchups against specific opponents. More and more it is able to be used in footballing terms as teams become more adept at creating positional structures in the attacking phase to facilitate the circulation of the ball into advanced areas of the field.

This was something that we saw in particular from Benfica when they moved the ball forward in a more structured way instead of playing quickly on the break. 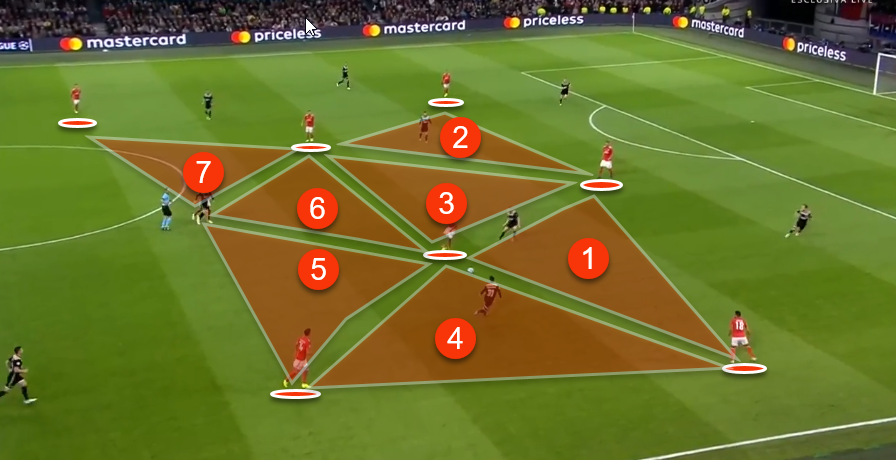 Creating triangles in this manner is something that can only be done properly through hours of hard work on the training field, there are some that base their entire philosophy of youth development around the theory of rondos and creating triangles but in truth the best teams create these structures as part of a fluid gameplan that is always orientated around the ball.

Here the man taking possession of the ball will have several quick passing options in order to circulate the ball, each pass will also see the structure from the Portuguese side shift to create similar passing angles around the man in possession.

Benfica also spaced the field well out of possession and would press Ajax high in the initial transition in order to press the ball and prevent Ajax from moving into quick counter-attacking structures. You can see an example of this above as four Benfica players have moved forward to engage the Ajax defenders.

As the game progressed into the second half there was a clear pattern emerging in the match as Ajax looked like the most likely to make the breakthrough through combinations in the attacking phase. Benfica, on the other hand, were more intent on playing in transition and trying to take advantage of the fact that Ajax were committing more and more players forward.

Above we see one example of the way that Ajax tried to combine around the edges of the final third in order to find a way through the Benfica defensive structure. The first ball in this example is a vertical pass from Blind from the back. The initial pass goes into the half space where there is an advanced midfielder looking to collect possession. The second pass is instantly played ‘around the corner’ for the Ajax left-back Nicolas Tagliafico to advance on to into space out wide.

The second example I have identified shows a point in the game where the ball was played through to the edge of the Benfica penalty area. The ball is once again on the left side with Tagliafico and he has passing options around the final third. Instead of looking to slowly play around the Benfica defence though they look to play vertically and through.

I have highlighted the movement from Kasper Dolberg in attack as he moves from the far side to the near side of the attacking line across two Benfica players. This movement creates the passing lane for Tagliafico to play the vertical pass through that Dolberg can collect and play on from.

This was a match between two sides that were fairly evenly matched. Both looked to play forwards whenever the opportunity presented itself and there was no inclination from either to play defensively.

A deflected goal in injury time for Ajax is all that separated the two sides and this was enough to see the Dutch side top their group after this third matchday. Given the way that Ajax have performed to this point this season in Europe, it would take a brave person to bet against them qualifying for the knockout stages of this tournament.

Gameweek one of the UEFA Champions League saw Bayern Munich host Atlético Madrid. Before the match, there was lots of […]

Just over a month after their EFL third-round defeat against Arsenal at the Emirates Stadium, Leicester City traveled back to […] 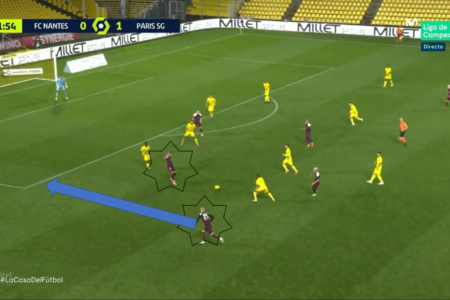 PSG were coming into this game with a good run of results, having won their three previous Ligue 1 games […]