Serie A 2020/21: How Milan outwitted Lazio to top Serie A before Christmas – tactical analysis

Milan managed to keep their unbeaten run and became the only team in the European top five leagues that hasn’t lost a game in the 2020/21 season yet. They secured the first spot in Serie A after a turbulent 3-2 win over Lazio.

Although the team had some struggles defensively and threw away a 2-0 lead, they managed to take advantage of their opportunities and get the three points with a 92-minute winner.

The Rossoneri were very explosive in their counter-attacking actions throughout the game, which allowed them to create danger in front of Pepe Reina’s goal. Their well-measured actions during attacking set-plays increased their explosiveness in attack and helped them in their fight for keeping the lead until the New Year with a one-point advantage to their city rivals Inter.

Lazio on the other side managed to exploit Milan’s insecurities and created some dangerous chances but couldn’t hold on the opposition’s pacey attempts and failed in securing the box area.

This tactical analysis will examine both team’s tactics and point out what did and didn’t work out for each of them. The analysis will show how Milan outwitted their opponents to grab the win. 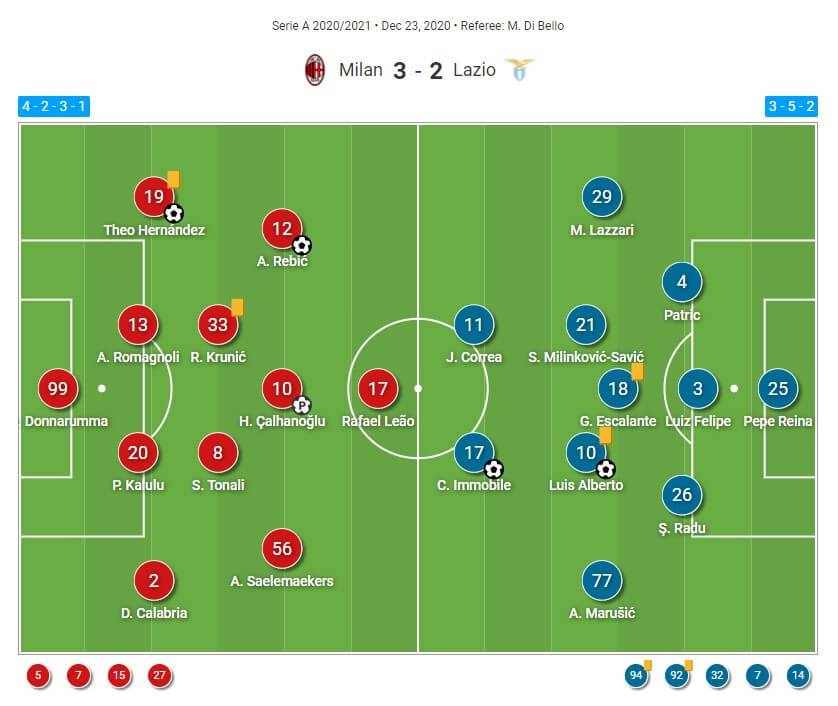 Stefano Pioli relied on a 4-2-3-1 set-up with the biggest absence in the starting XI being the one of Zlatan Ibrahimović upfront. Gianluigi Donnarumma covered the goal, while Theo Hernández, Alessio Romagnoli, Pierre Kalulu and Davide Calabria created the back-four.

In midfield, the manager relied on Rade Krunić and Sandro Tonali who would drop back to support centre-backs when out of possession. Ante Rebić and Alexis Saelemaekers flanged Hakan Çalhanoğlu and Rafael Leão who were responsible for the attacking actions in the central areas.

Çalhanoğlu turned out as Milan’s most valuable players throughout the game, not only by scoring and assisting twice but because of his movement and creativity, which increased the thread in the final third immensely.

Simone Inzaghi set the team up in his favoured 3-5-2 with Pepe Reina on the goal and a three-man defensive line of Ştefan Radu, Luiz Felipe and Patric. Adam Marušić and Manuel Lazzari operated as wing-backs, having a crucial role in Lazio’s attacking actions. Luis Alberto, Gonzalo Escalante and Sergej Milinković-Savić covered the centre midfield with Escalante acting more as a holding midfielder while the other two drift forward.

Ciro Immobile and Joaquin Correa were responsible for the actions in front of the goal. Correa left in 32nd minute due to injury which introduced Vedat Muriqi as the second attacker.

Luis Alberto was the player that stood out the most and kept Lazio’s lines in sync while trying to create chances for his team.

Both teams were focused on their attacking actions and finding a way to expose the oppositions. The left flank turned out as the most frequently used attacking channel by both Milan and Lazio and although they were trying to move all over the pitch, their most dangerous chances came from exploiting these areas and then moving back centrally.

Set-pieces were key for both sides as they were looking to take advantage of each given opportunity. This resulted in a lot of activity in the advanced areas leading to the final 3-2.

Milan were successful in exposing the opposition on a counter. This was possible thanks to their pressing efforts and their well-measured ball interception. The Rossoneri tried to trouble Lazio’s build-up by blocking the passing lanes and covering the potential ball receiver aiming to win the ball back early on and immediately counter-attack.

The key to their successful movement on a counter was the commitment of many bodies in the advanced areas. By intercepting the ball in the central areas, they were able to quickly outnumber Lazio’s three-man defence in the final third and create chances.

The team intercepted the ball 54 times and as the map above shows, many of their attempts happened in the middle third. Their approach was successful in breaking Lazio’s build-up efforts and exposing their highly positioned backline.

Expectedly, all of their successful actions were possible thanks to their pressing strategy, where they would position smartly between Lazio’s lines and block the passing lanes. While covering the potential ball receiver, another player would come out from behind and intercept. Although most of their interceptions happened on the right, they would often spread out to the left and use Rebić’s movement to outrun the opposition.

That was achievable due to Lazzari’s tendency of joining the attack and leaving acres of space behind, which Milan didn’t hesitate to exploit.

In the times the Biancocelesti had struggles in bypassing Milan’s press they would overload the left flank and use link-up-play to advance the ball and break the opposition’s defence. The use of wing-backs was crucial as they were the main players to help with ball progression. They would drag Milan’s players out of position by overloading the left side while leaving the other side completely uncovered and then switch play in efforts to penetrate. Due to Milan’s high press Lazio were often forced into sending the ball back to Reina using him as an additional passing options in efforts to bypass the press.

Lazio heavily relied on playing with width and using crossing as a way to expose Milan in the final third. That’s part of the reason for being unable to utilize their chances many of the times. Only six of their 22 crosses reached their target accurately which threw many of their successful positional attacks to waste.

Their crossing map above shows that the main responsible for the crossing were Marusic and Lazzari and most of their attempts were unsuccessful. This affected Lazio’s efficiency in the final third and they had to look for a different attacking approach.

They tried attacking through the central areas by exposing Milan’s double pivot and using Luis Alberto’s creativity to create short pass combinations in the final third. They would then use the attackers’ positioning to send lofted passes behind the defence. Lazio’s efficiency in attack was affected by Correa’s injury early in the game, which forced Inzaghi into using Muriqi upfront. He couldn’t integrate well and finished the game with one shot on target. With his introduction, Immobile had to drop slightly deeper, which didn’t help the team in exploiting the advanced areas.

Milan used their set-play opportunities very smartly throughout the game. While they weren’t very successful in their aerial performance in the central areas, they performed better in the box and managed to outplay the opposition on a few occasions. The Rossoneri managed to create goalscoring opportunities with a few of their corners and free-kicks.

That doesn’t come as a surprise since Milan have been utilizing their set-play chances quite successfully since the start of the season. Seven of their 32 goals so far are a result of their set-piece efforts.

Lazio’s man-to-man marking strategy in the box didn’t fulfil its purpose. With both Milan’s first and third goals, there were individual errors and the certain markers’ aerial presence was lacking.

Lazio’s lack of defensive improvement throughout the game cost them the point after falling victim of similar errors at the back. On the other side, Milan smartly used their strengths and used the opposition’s weaknesses to keep the league leadership.

Despite their defensive vulnerability, the team proved that they can win games without Ibrahimović, who is praised as the main responsible for their outstanding performance since the start of the season. While they are undoubtedly better with him in the squad, their attacking prowess doesn’t go away in his absence. That’s what made the Rossoneri the deserved winner in this battle.