Elche secured promotion to La Liga in the Segunda División play-offs on Sunday night as they overcame Girona in the second leg of their play-off final at Estadi Municipal Montilivi. After a 0-0 draw at the Estadio Manuel Martínez Valero in the first leg, Girona knew another goalless draw would see them through after extra-time.

For much of the tie, it looked like that would be the case. However, the dismissal of Cristhian Stuani on 61 minutes following a VAR reviewal of a stamping challenge changed the match, with Elche coming out of their shells and beginning to show a more offensive approach against Girona.

This tactical analysis will look at how Elche overcame Girona to seal a place in La Liga for 2020/21. The analysis will consider the tactics of Pacheta and Francisco in this hard-fought and intense tactical battle which took a turn with the sending off of Stuani. 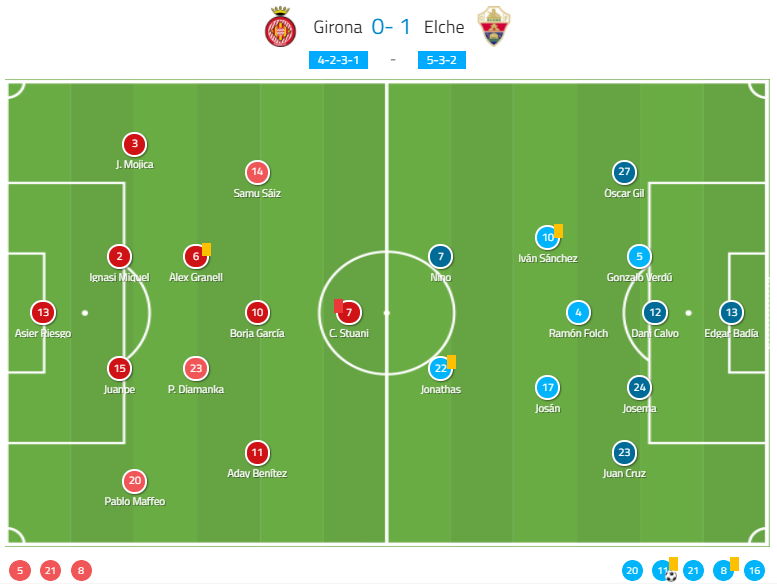 Girona clearly took a more offensive approach than in the first leg, adding a more direct and quick threat with players like Aday Benítez and Johan Mojica coming into the team, offering that dribbling style that had not been as successful in the first leg on a poor pitch surface.

Elche crucially recalled Jonathas, their leading goalscorer, in attack. To compensate, Josán and Ramón Folch came into midfield to add more defensive steel with a more conservative approach who would look to break up play and counteract Girona’s increased threat.

Elche had kept clean sheets in all of their play-off ties going into this final second leg and they did so once again. In fact, they limited Girona to just 0.41 xG, their lowest figure at home since before the pandemic brought the season to a halt. Pacheta has made this a key element of their play, with only five teams having conceded fewer all season, including promoted duo Cádiz and Huesca. Throughout the season, Elche conceded 11.55 goals fewer than expected, actually recording the fifth-highest xG against. However, against Girona, they reflected how Pacheta has improved upon this aspect of the game as the season has gone on.

The coach stuck to a back five again, looking to man-mark Cristhian Stuani and keep his full-backs possessioned deep when not in possession in order to prevent the runs from deep which Francisco was looking to achieve with his changes to the team. The front two would press when required, though not with great energy or intensity as may be expected from a frontline with a combined age of 70. The midfield three would then act as cover, while the backline of five defenders would form a well-organised unit who would remain narrow whenever possible, allowing the midfield to stretch if required.

Girona could not find a way through, being forced to resort to long balls or to shoot from distance. With nine attempts on goal, only two were on target, 11%, reflecting the fourth-lowest figure of the season and one that had only been worse once since September. This reflected the frustration that Elche generated through their approach, holding Girona off and forcing them to gamble on low probability and high-risk attempts from outside the box.

The reaction to Stuani’s dismissal

The turning point of the tie undoubtedly came from the controversial 61st minute sending off of Girona’s top goalscorer, Stuani. Throughout the first hour, Stuani had been leading the line and would look to push the Elche central defensive three back by remaining on the final shoulder of the last man. That enabled the wide runners, Aday and Samu Saíz, to stretch play with Borja García coming through the middle with the ball, occasionally alternating with Saíz. As a result, Elche could look to counter-attack by outnumbering and stretching the Elche defensive line when they did push the full-backs forward.

However, after the Uruguayan was sent off, that figure was lost. Girona would still look to counter regularly but there was no such figure pushing the Elche defence back. As such, Elche could commit more men forward. As can also be seen in this example, Francisco’s decision not to replace Stuani with an out-and-out centre-forward meant that the width previously mentioned almost entirely disappeared. Suddenly, Saíz and Aday would become narrower as they looked to occupy Stuani’s space in the middle and while Elche’s greater offensive freedom left big spaces wide open, Girona could not take advantage.

The other noticeable consequence of this was that the central player, usually Borja García, would struggle involved in play as the team were pushed back by Elche’s more attacking strategy. This meant that the makeshift striker would be left with no choice but to drop into a deeper role and also taking on a responsibility which they are not accustomed to in trying to hold up the ball. This is evident in the number of aerial duels that Girona won with and without Stuani in the tie. With Stuani on the field, Girona won 55.17% of aerial duels, compared to just 41.18% following his sending off. That difference was crucial in explaining how Girona’s build-up play continued to break down without an alternative to Stuani available on the field or on the bench, but without changing approach.

In this final half an hour, Girona made only 25 passes forward, from a total of 137, representing 18% of the total of forward passes from 38% of the game. They were increasingly pinned back too, as Elche’s passing stats show. For the same figure over the same 38% of the tie, Elche completed 41% of their total forward passes from the match. This shows just how much Elche grew into the game as they committed men forward, capitalising on the extra man while Girona’s attacking strategy fell apart, with Francisco failing to react adequately, inexplicably not bringing on any of his substitutes until injury time.

Attacking the flanks on the counter

As Elche looked to get forward and attack Girona, they primarily looked to do so down the flanks. With Saíz and Aday being forced to drift more centrally and gamble more in attack, that left the full-backs open in a more vulnerable way and allowed Elche to get at them more directly. The decision to bring on wide man Milla, the eventual matchwinner, in place of target man Jonathas reflected that. Pacheta looked to stretch the game immediately and attack the full-backs, Pablo Moffeo and Mojica. In the final half an hour after the dismissal of Stuani, Elche produced nine of their 11 total crosses from the game, accounting for 82%.

In truth, while it did create opportunities, including almost all of Elche’s xG, they did not record a shot on target until the 96th minute when Milla scored the winner. Girona overcommitted central players to the right in an attempt to protect Maffeo, with Fidel pushing forward to try and attack the space in behind them. At the far post, Dani Escriche and Milla were both drifting to the far post to occupy Mojica and create a two-on-one situation at the far post which Fidel could pick out with a perfectly-weighted cross.

What was particularly intelligent here was the movement from the two. Mojica was aware of both men either side of him, and Escriche moved his run centrally, level with the penalty spot in terms of positioning, while Milla kept his move wide and not even entering the six-yeard box. This meant that a tired Mojica had a split-second decision to make deep into injury time and, in the end, he failed to do so. The full-back instead stayed in the middle, without Ignasi Miquel able to get back across to cover. That meant that by the time the ball came to Milla at the far post, he was able to convert a free header and send Elche to La Liga.

There can be little doubt that Girona dominated this tie, even across both legs, but it must be recognised that this was also Elche’s gameplan to allow the opposition to dominate in terms of possession. Elche got the luck they were hoping for with Stuani’s red card and then looked to attack tired legs with a reactive approach from Pancheta, immediately making tactical and personnel changes. That reaction, compared to the passive approach from Francisco who did not make any substitutions and left the side with makeshift changes for the final 30 minutes, proved to be decisive.

With only a few weeks to prepare, Elche will have their work cut out to put up a fight against the likes of Real Madrid or Barcelona. A defensively strong side, they have shown their ability to hold a team out but will struggle to maintain such clinically in La Liga. With just one shot on target, they may struggle to pull off many wins by following this same strategy in 2020/21. In Pancheta, they clearly have an intelligent coach who can adapt his team accordingly though, and just being in La Liga will be considered a remarkable achievement for a side whose squad were in Segunda División B only two years ago.