Following defeat to CSKA Moscow in the Champions League and defeats to Levante and Alaves in La Liga, Julen Lopetegui and Real Madrid really had very little room for error up against Viktoria Plzen on Tuesday night. Their narrow 2-1 win saw them ease through, but it was far from the comfortable victory which fans were hoping would provide a confidence boost ahead of El Clasico on Sunday. Instead, players were booed and whistled off of the field after yet another dismal performance, only this time it was just enough to get them their first win in over a month. Here, our tactical analysis will use statistics to identify what key points Real Madrid can take from the game, both for the positive and the negative, and what it could mean for Julen Lopetegui’s future.

There was no shape to Real Madrid

Amid so much speculation regarding the future of Julen Lopetegui, it was always likely that it would be a strange night at the Bernabeu on Tuesday. What was most baffling of all was the system that Los Blancos deployed, particularly after substitutions. At the start, it appeared to be a fairly clear 4-4-2 with a diamond in midfield, but as the game went on and substitutions were introduced, the team lost its shape entirely.

The first change threw that system out of the window, with Fede Valverde sticking rigidly to the left flank and leaving Luka Modric to cover the right in a much more narrow shape. With Lucas Vazquez still bombing forwards, it left huge gaps on the right which the Czech side gleefully exploited repeatedly, with their goal also originating from a move down Real Madrid’s right. With Gareth Bale already drifting wide but not deep, Marco Asensio was a direct replacement, whilst Mariano Diaz’s introduction for Karim Benzema did the same.

In the latter stages, the impression for those in the stands was clear. This was a team run by the players, not the coach. As Lopetegui went mad on the touchlines, screaming at Marco Asensio and others to come more central and drop deeper, his players barely paid any attention. He may still be in the job, but if the final half an hour of this tie was anything to go by, Lopetegui is Real Madrid coach only in name.

Lucas Vazquez is not a full-back

Perhaps it was Julen Lopetegui’s big gamble. Perhaps it could have ended in disaster. Having signed Alvaro Odriozola from Real Sociedad in the summer, it is dumbfounding that the coach opts to field Lucas Vazquez at right-back and out of position for the second time in four days. Against Levante, it was a desperate measure taken to add attacking threat. Against Viktoria Plzen, it was inexplicable.

Winning just two of his 11 defensive duels, Vazquez’s performance highlighted exactly why he is regularly deployed further forward down the wing and should only be used as a full-back as a last resort. Whilst in attack he was good, making more crosses than in any domestic fixture this season, he was found sorely lacking when it came to the defensive side of the game.

In part that was down to his positioning. Bombing forwards down the flank and looking to overlap is not a problem in some games, but Vazquez was oblivious to the fact that Gareth Bale in front of him was not tracking back or covering at all. Time after time, it opened up huge gaps on the right-hand side which Viktoria Plzen looked to exploit. Their best chance of the game came in this way when Patrik Hrosovsky broke in between Vazquez and Nacho and should have scored with that chance alone boasting 0.54 xG.

Against better opposition, it could have been different

On paper, Viktoria Plzen shouldn’t have had a sniff. Even the very best of Czech teams should struggle against the European champions at the Bernabeu. It wasn’t the case though, and with an xG of 1.3, their goal coming from a chance with just 0.11 xG, they could equally feel that on another day or with a more clinical striker, they could easily have come away from Spain with at least a point. Fortunately, Madrid had Keylor Navas and some poor finishing to thank.

Either side of half-time, there were huge opportunities for Hrosovsky and Milan Havel which could have seen the visitors equalise to bring the tie back to 1-1. With a nervous stadium and clearly anxious players, an equaliser could have proven disastrous. That Real Madrid were left clinging on in the final moments was enough of an embarrassment for many to whistle and boo at the final whistle.

As was the case against the likes of Alaves and Levante in recent weeks, Real Madrid conceded chances. It is hard to imagine that had Real Madrid been up against any top half La Liga side they would have come away with all three points. With Barcelona next up in El Classico on Sunday, it really is proving difficult to see how Real Madrid will be able to keep them out for long enough to take anything from the game if they reproduce such a display.

Is Karim Benzema back at his best?

Ending a goal drought of almost two months, Karim Benzema was showing signs of improvement on Tuesday. His xG of 0.66 was his second highest of the season, only behind his brace against Girona which many claimed to be his best performance for the team in years. If Real Madrid are to get back on track, they need to find the net and they have no-one better than an in-form Karim Benzema to do that.

What’s more, he also made more passes and more progressive runs than in any other fixture this campaign. Benzema appeared to regain his confidence with the early goal, which in itself was well taken, finding space at the far post to nod in Lucas Vazquez’s pinpoint cross. This was not just a case of playing against weaker opposition though, as Benzema was actively more threatening with his movement on and off the ball.

Having looked so dreadful and blunt of late, it was quite the turnaround. Benzema loves big fixtures and El Clasico will be coming at the perfect time for him. But, it is crucial, not only for him, but for Real Madrid and Julen Lopetegui’s job prospects, that he keeps up this streak in form to establish himself as the main goalscorer in a team which should be fighting for titles, not concerned about qualifying for Europe. 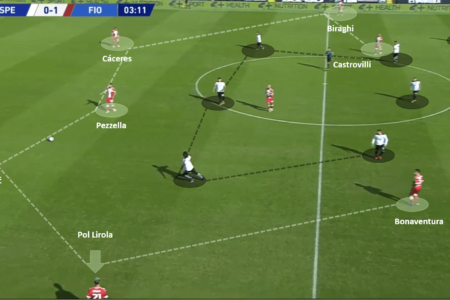 The Serie A was back in action with Spezia hosting Fiorentina at the Dino Manuzzi. Spezia and Fiorentina had never […] 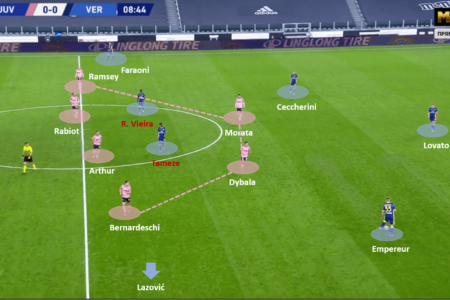 The Serie A was back in action with Juventus hosting Verona at the Allianz stadium.  Both teams had had an […]