FC Barcelona leads the Primera Iberdrola by nine points, so this Madrid derby looked to be a defining match for both sides as they compete with Madrid CFF, Levante UD, and Real Sociedad for the other two slots in next season’s UEFA Women’s Champion’s League. Real Madrid came into this match on a run of four matches without a loss, while also having the extra rest of no midweek European football. Atletico Madrid, on the other hand, came into this match fresh from their elimination from Europe with a 3-1 aggregate loss to Chelsea in the Champions League Round of 16.

Atletico Madrid started this match in a 4-3-1-2, a similar formation that they employed in their midweek 1-1 draw against Chelsea in the Champion’s League. They made two changes in personnel, with Toni Duggen dropped to the bench and replaced in midfield by Amanda Sampedro. American Kylie Strom was also left out of the starting XI, with Aissatou Tounkara getting the start instead. This change meant that Merel van Dongen moved from centre-back to left-back, allowing Tounkara to pair in central defence with Laia Aleixandri.

Real Madrid has been on a good run of form the last few weeks, despite missing Kosovare Asllani after she suffered a knock, but manager David Aznar made four changes to the side that strolled to an easy 4-1 victory a week earlier against Espanyol. They lined up in a 4-3-3, with Babett Peter missing the match through injury and replaced by Claudia Florentino. Marta Corredera, Thaisa Moreno and Lorena Navarro were all dropped to the bench, replaced by Olga Carmona, Marte Oroz and Marta Cordona in the starting XI. 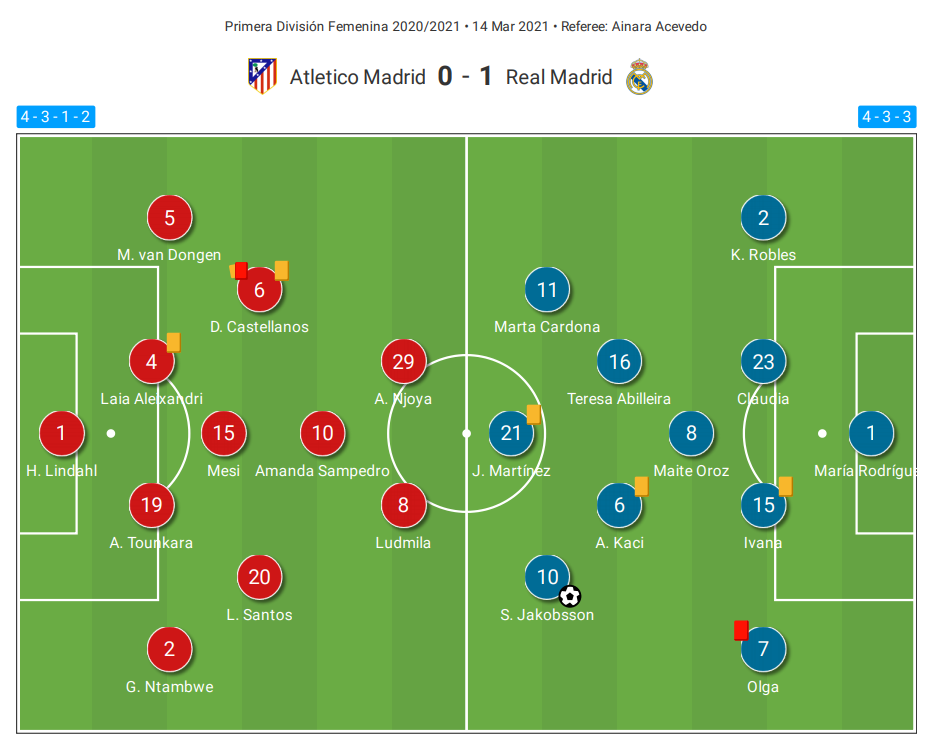 A physical contest from the start

This was a heated affair from the starting whistle, with both teams showing a willingness to physically challenge the opposition. Real Madrid started the match looking to press aggressively against the home side, forcing Atletico Madrid back. The home side struggled to play out from the back in the first 10 minutes, as there was very little connection between the defence and the midfield. The result was often the ball going out wide to the fullbacks before being chipped up the touchline in the hopes that Ludmila or Ajara Njoya would be able to win the duel.

Real Madrid had less possession in the first 10 minutes, but they looked the sharper side as the match started to settle into a familiar pattern. Atletico Madrid would struggle to play the ball out of the back, and Real Madrid would energetically press. This resulted in Real Madrid either winning the ball high up the pitch or recovering possession when Atletico went long.

This pattern changed in the 12th minute when Olga Carmona was given a straight red card. Having stayed back for a Real Madrid corner kick, she played a poor pass in midfield. Atletico Madrid countered quickly, playing a pass that put Ludmila through on goal. Carmona bundled the Brazilian attacker over near the halfway line. The referee immediately produced the red card, and the visiting side was now reduced to 10 women.

With the red card, David Aznar switched his side into a 4-4-1, with Teresa Abilleira moving from the midfield to cover at left-back. This only lasted until the 20th minute, when Maite Oroz was sacrificed for Marta Corredera. With this change, Abilleira returned to the central midfield and Corredera filled in at left-back. 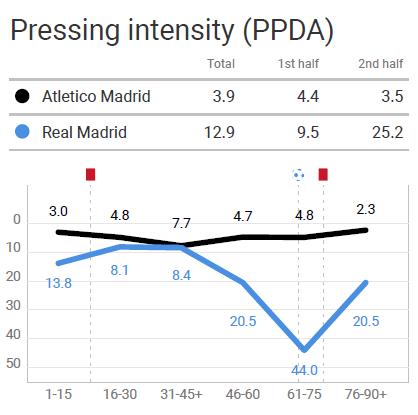 As a result of the changes, Real Madrid settled into a deeper defensive block. As the graphic up shows, their pressing intensity increased. But the Atletico Madrid line is a bit deceiving, as Real Madrid played a more direct game and was recovering the ball higher up the pitch. This meant there were fewer passes per defensive action on the part of Atletico Madrid, but they weren’t as aggressive in their press, even with the one woman advantage.

With Real Madrid reduced to 10 women, Atletico Madrid had more success progressing up the pitch. David Aznar’s Real Madrid side stopped pressing the defensive line of Atletico. However, Real Madrid was able to challenge Atletico’s entry into the midfield. Real Madrid’s striker Jessica Martinez was tasked with marking the deepest midfielder for Atletico Madrid, Silvia ‘Mesi’ Meseguer. She was effective in this role, and as a result, Atleti was often forced to continue playing long balls towards the forwards.

It wasn’t until late in the first half that Atletico Madrid, and their manager José Sánchez Vera, adjusted to help Atletico’s build-up play. Leicy Santos started to play deeper in the build-up, playing alongside Mesi to offer more passing options for the backline into the midfield. As we can see in the graphic below, with Santos now playing deeper alongside Mesi, it makes it impossible for Martinez to block the passing lanes into the midfield. 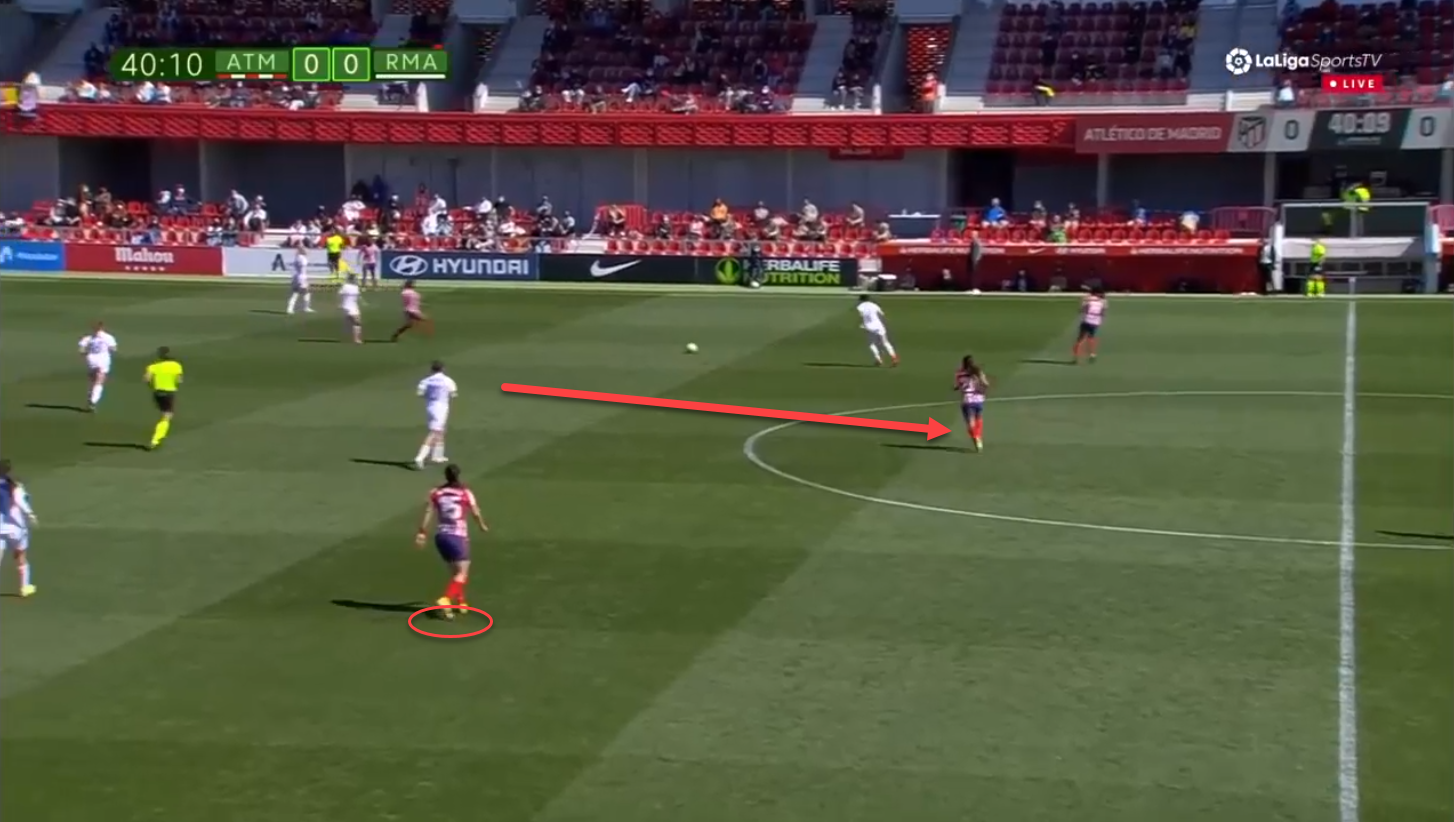 Ludmila and Njoya played as the strikers leading the line for Atletico Madrid, but they were starved of service for most of the match. In the first 30 minutes of the match, Njoya stayed in a central position, while Ludmila would drift into wide areas. Ludmila continually looked to receive the ball in wide areas, where she could turn and use her pace against the Real Madrid’s centre-backs. Unfortunately, they saw little of the ball with Atletico Madrid unable to progress the ball forward during their build-up.

As we can see in the graphic below, Ludmila is in the right half-space and is looking to receive the ball so she can dribble at the centre-back. Njoya is in an offside position, but well marked by the centre-backs. 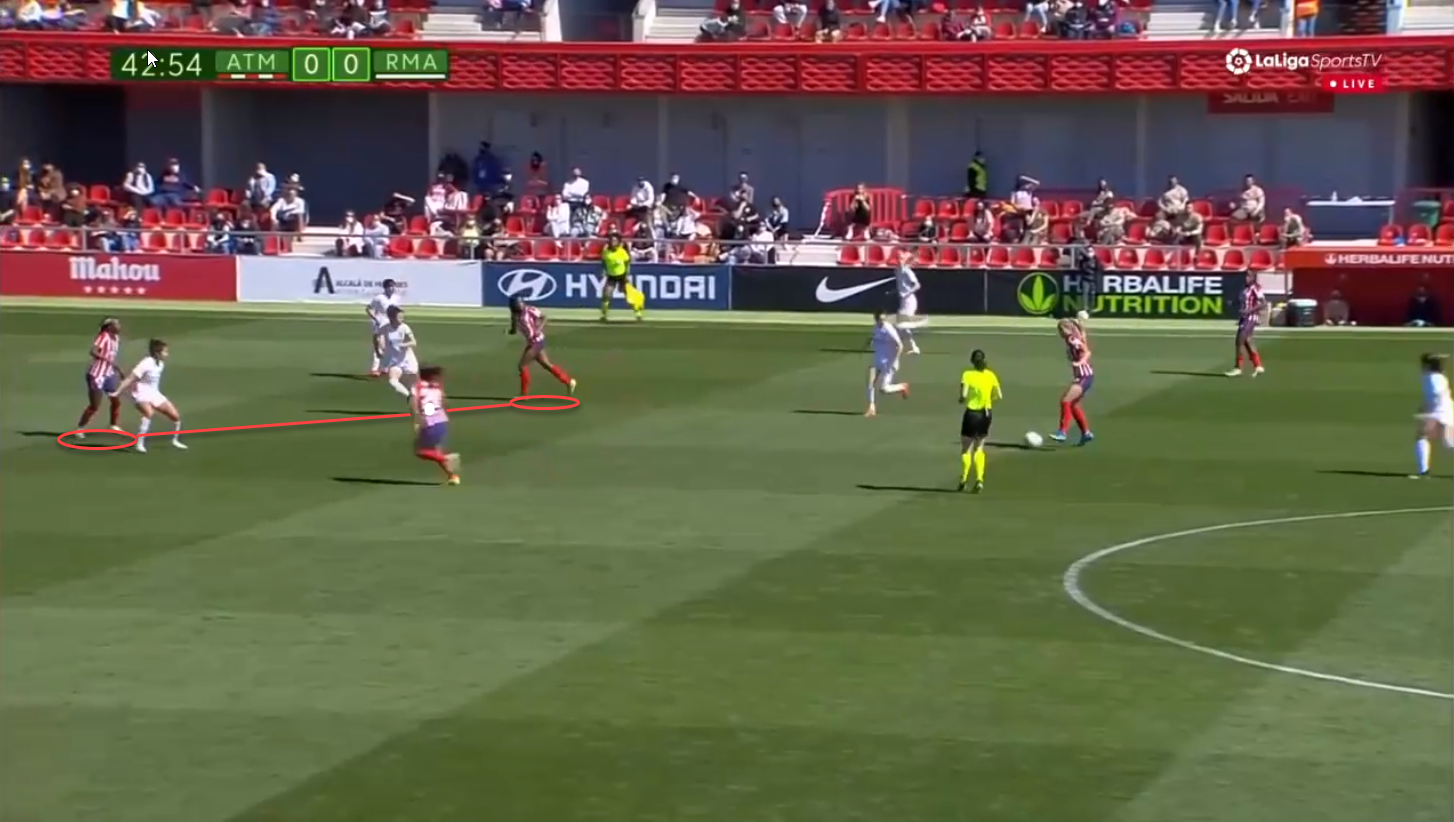 Better play in the second half.

With such a poor performance in the first half, changes were expected at halftime. Atletico Madrid made two changes, with Amanda Sampedro and Aissatou Tounkara replaced by Emelyne Laurent and Kylie Strom. This change meant that Merel van Dongen moved to centre-back, with Strom slotting in at left-back.

Atletico Madrid moved their midfield up the pitch in possession, allowing more movement and passing options in attack. Mesi retained her position as the deepest midfielder, with three attacking midfielders in front of her. Laurent on the left side, Santos in the middle and Castellanos on the right. In the image below, we can see that Atletico Madrid’s midfield is positioned closer to the strikers. 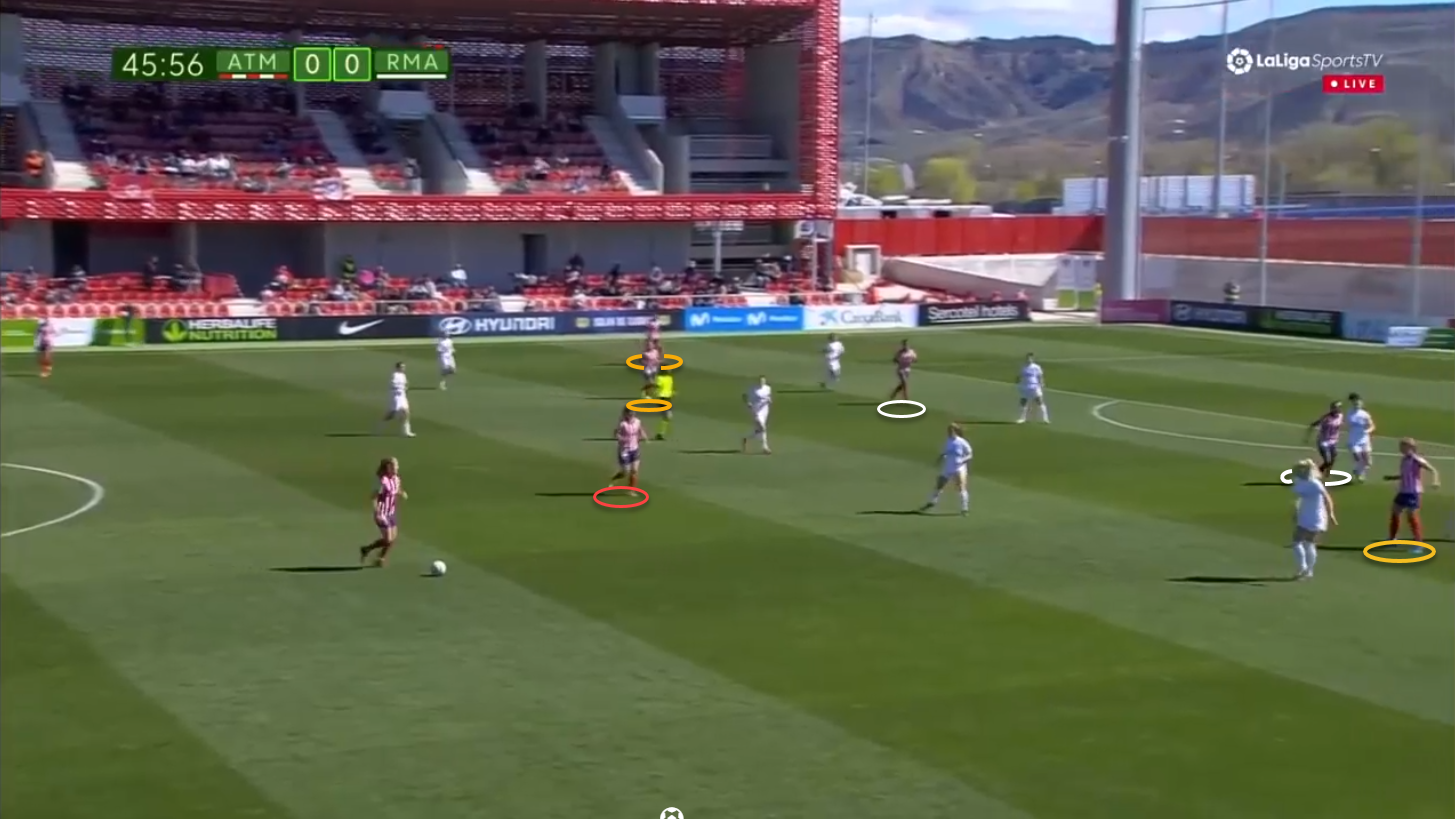 This change produced immediate results for Atletico Madrid. Their first real scoring chance came in the 50th minute. Aleixandri stepped into the midfield with the ball and played a quality vertical pass into Njoya, as she stepped between the lines. Njoya flicks the ball laterally to Laurent. Njoya then makes a run towards the near post, dragging two Real Madrid defenders away from Laurent with her. Laurent then cuts inside and curls a ball towards the far post, forcing Real Madrid GK Misa to make an excellent save. 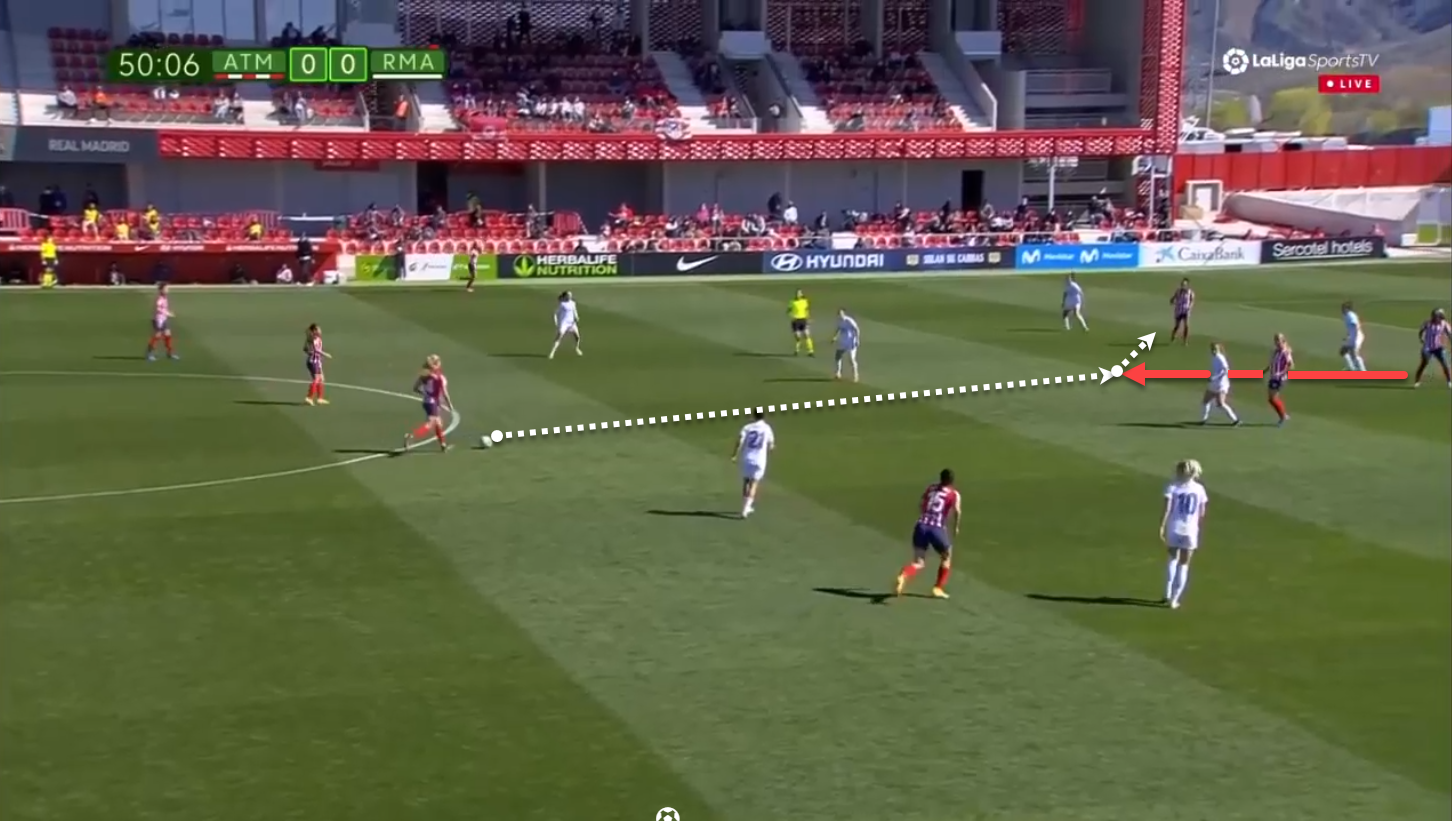 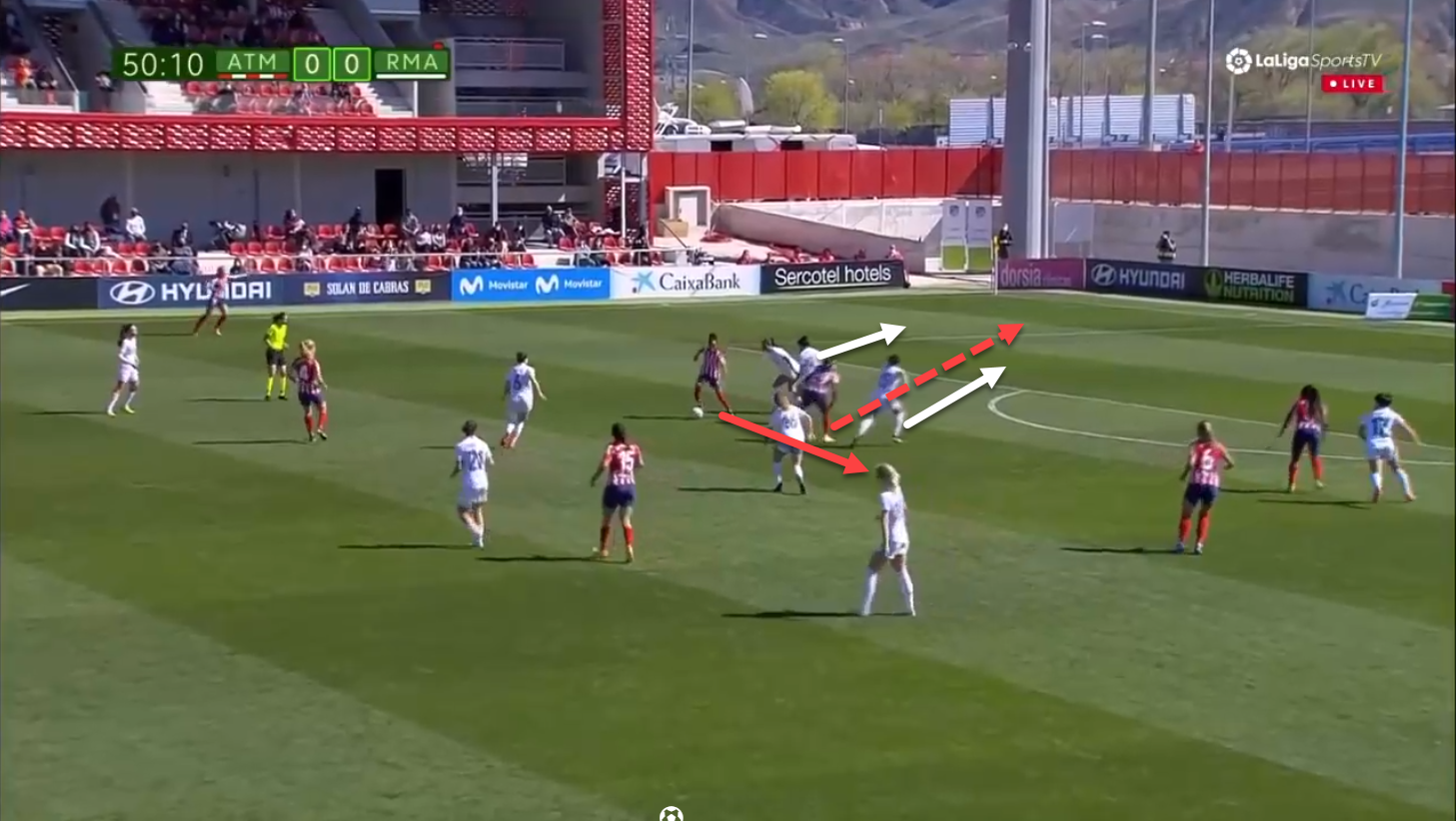 As a result of Atletico Madrid’s changes, they were more dangerous with possession but left themselves more vulnerable to the counter-attack. They still struggled in the early phase of their build-up but were better at converting their overwhelming possession edge into more chances than they did in the first half.

Throughout the first half Real Madrid was content to defend and keep Atletico’s play in front of them. They faced little jeopardy in Atletico’s possession, but this changed after halftime. Atletico Madrid was more dangerous, and this caused Real Madrid to attempt to counter the home side’s weakness. Real Madrid started to press high up the pitch, putting pressure on Atletico’s backline and looking to take advantage of a mistake.

As the images below show, the opportunity came in the 67th minute, as Atletico Madrid attempted to build play through the midfield. With pressure from Real Madrid’s midfield, Claudia Iglesias plays the ball back to Strom at left-back. This pass allowed Real Madrid to ramp up the pressure. Strom has an available passing lane to Santos, to break the press, but instead, her first touch takes her towards the touchline and away from her passing options. She eventually turns and plays a simple pass back to the goalkeeper, who just kicks it downfield to relieve the pressure. 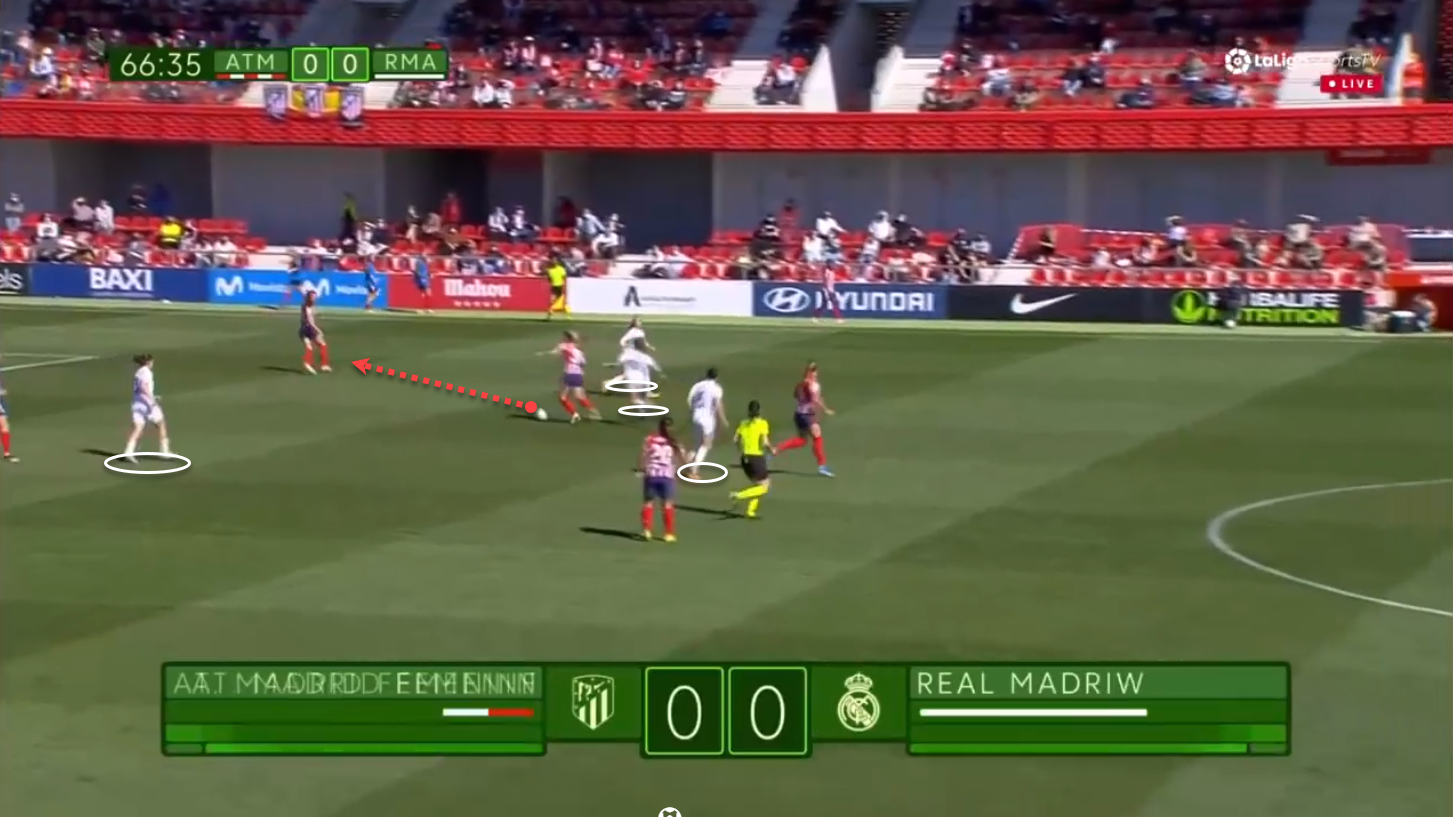 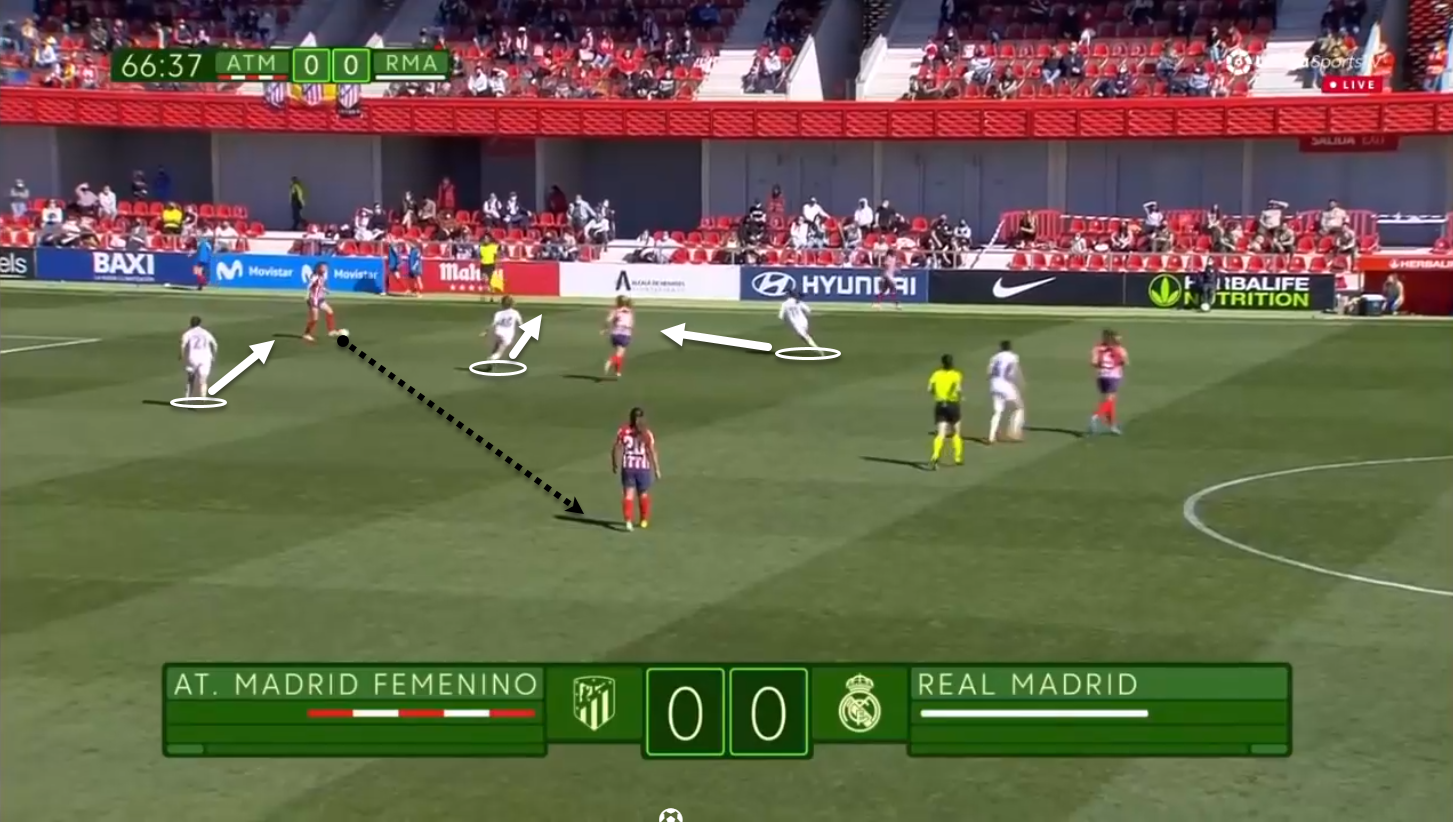 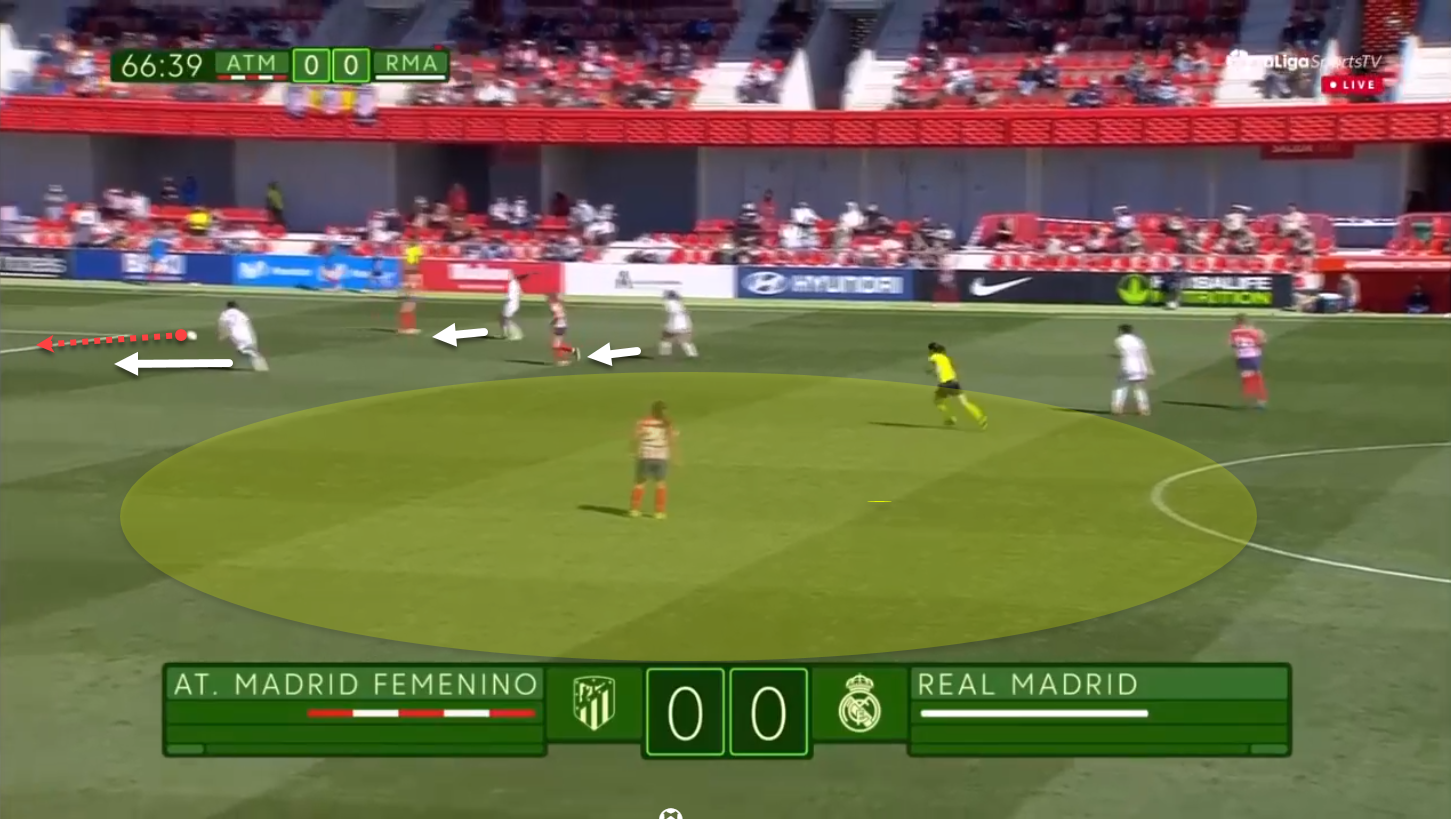 Real Madrid is able to win possession high up the pitch and immediately starts a counter-attack. Abelleira receives the pass and releases a beautiful through-ball to Martinez, who easily splits the Atletico Madrid centre-backs, who were disconnected from each other when Real Madrid recovered possession and were never able to get back into position. 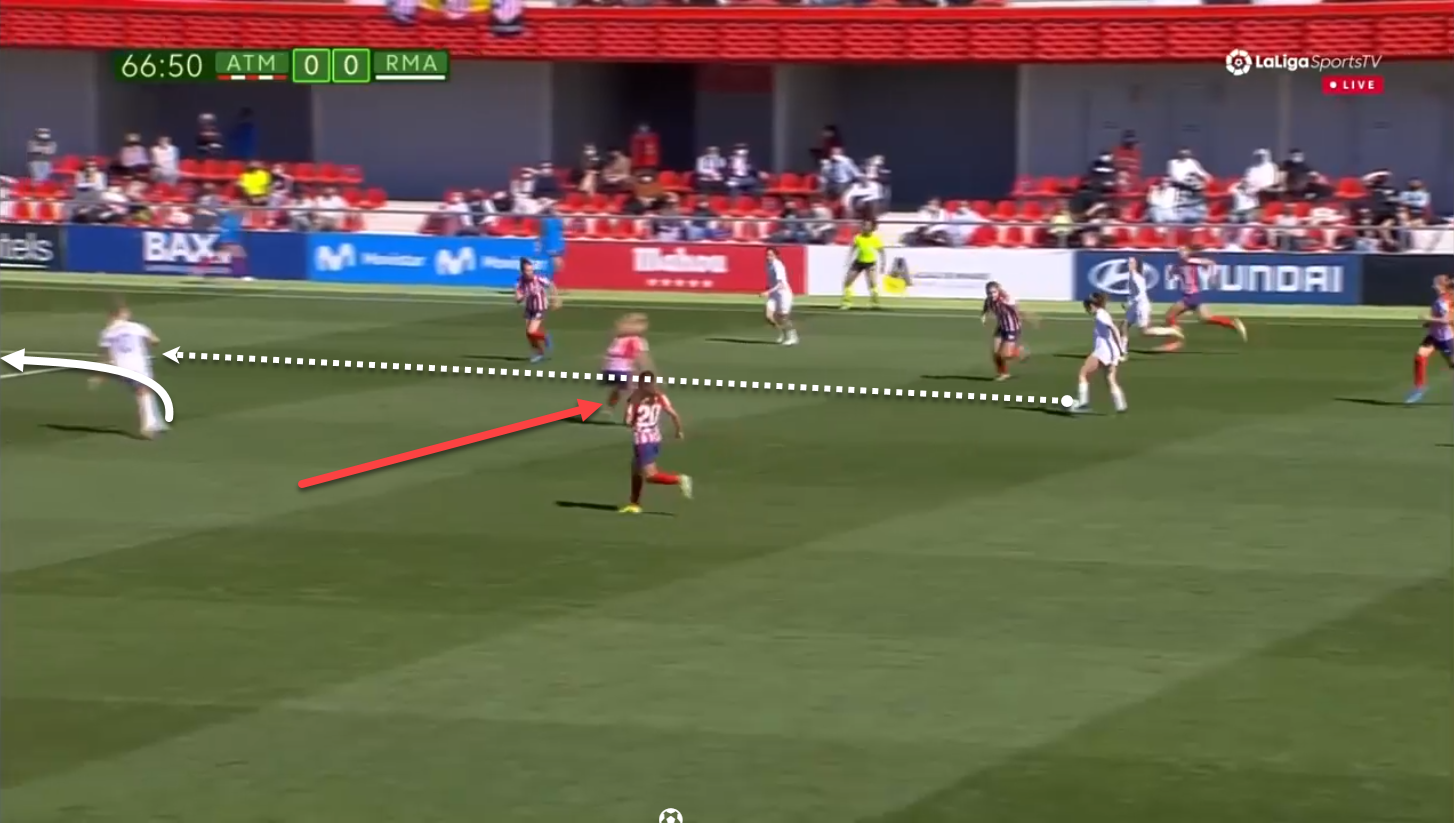 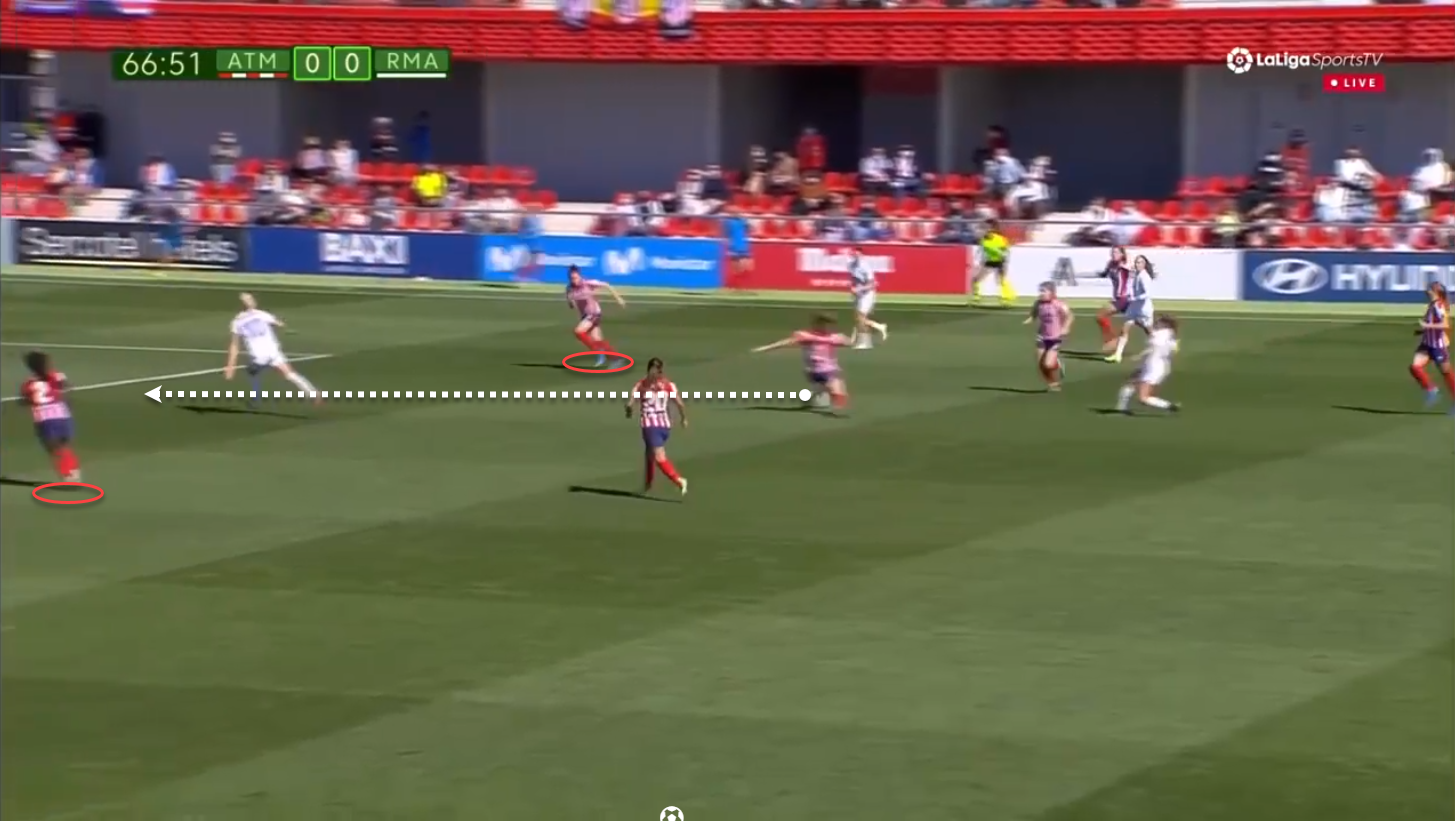 After failing to break down a 10-woman Real Madrid side, they were now trying to get a goal from an even more resolute Real Madrid side. When they should have been ratcheting up the pressure and attempting to at least come away from this match with a point, they imploded.

Deyna Castellanos managed to pick up two yellow cards in the course of five minutes, meaning that Atletico Madrid was reduced to 10 women with 13 minutes left to play. With both sides even again, the final 10 minutes of this match were played at a walking pace as both sides seem to accept that it was Real Madrid who would come away from this derby with the victory.

This match showed the struggles that Atletico Madrid have come under of late. They again were able to grasp defeat from the jaws of victory. They are able to control possession, but they have proven themselves unable to convert their control of the ball into clear-cut chances. The home side will regret the missed opportunities in this match, as the result leaves them five points outside of the Champion’s League positions in the Primera Iberdrola.