After pulling off a dramatic victory while hosting Everton over the weekend, Brendan Rodgers and Leicester City continued their relentless Premier League campaign with a 2-0 win against Watford in a midweek matchup. James Maddison returned to the scoresheet after Jamie Vardy extended his incredible goalscoring streak to seven consecutive matches. This tactical analysis will examine the strategies used by Leicester to overwhelm Watford’s mid-block approach, as well as Watford’s attempts to combat them using attacks of their own. 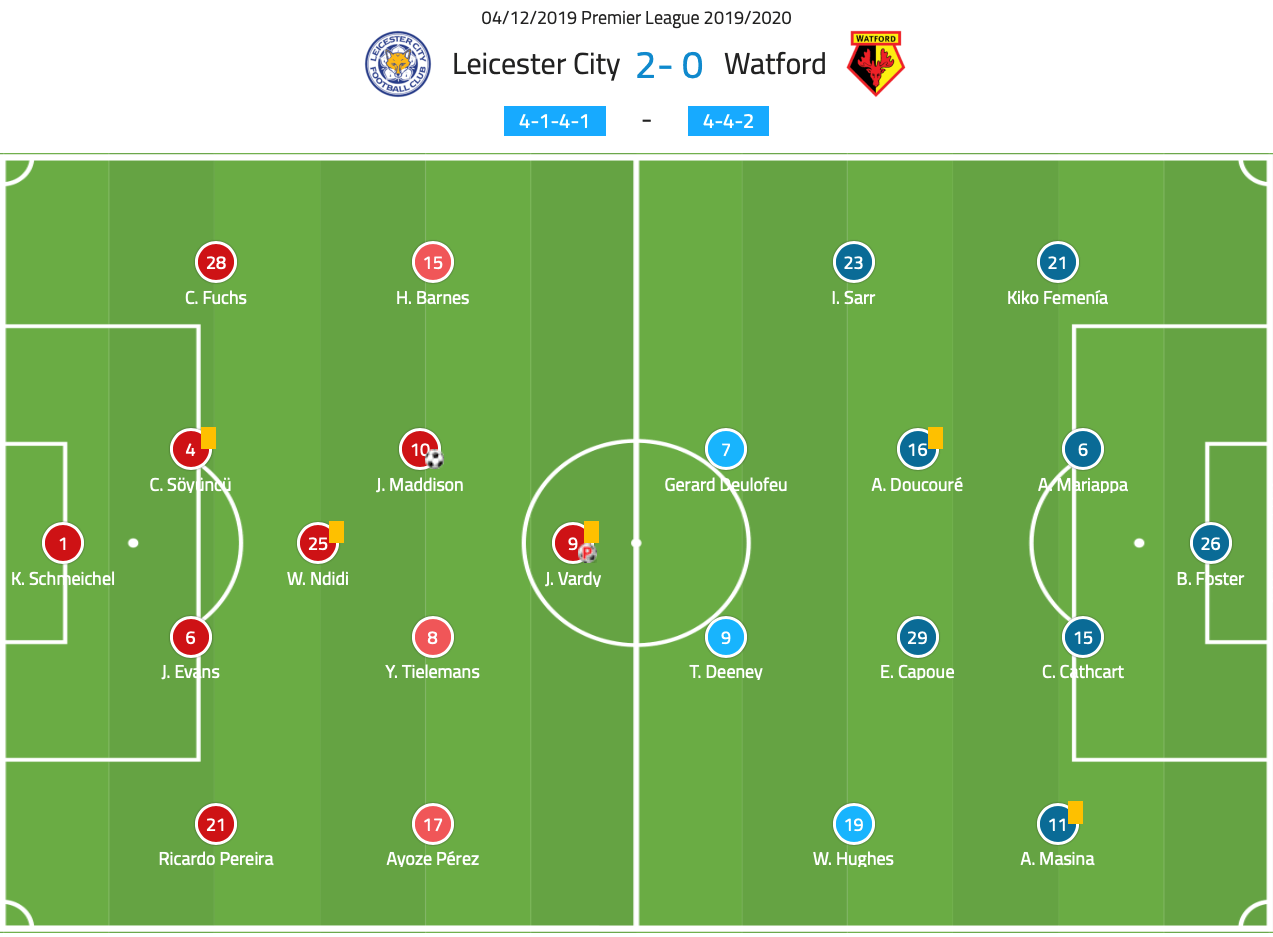 Rodgers sent his side out in their now common 4-1-4-1 formation. The Foxes have been highly successful in this formation, with Wilfred Ndidi at the base of the midfield alongside Youri Tielemans and Maddison. Ayoze Pérez and Harvey Barnes began as the two wingers on either side of the in-form Vardy. Rodgers, however, had to make his first change to the starting eleven in seven league matches, as Christian Fuchs replaced Ben Chilwell who was kept off the team sheet with a slight hip injury. The rest of the back line was as expected, as Ricardo Pereira, Jonny Evans, Çağlar Söyüncü have all been stellar this season.

The visitors had just sacked their second manager of the season, letting go of Quique Sánchez Flores on Sunday after doing the same to Javi Gracia back in early September. The club sits in last place on the Premier League table, and U-23 coach-turned-interim manager Hayden Mullins is looking to stop the bleeding with the club only claiming one win all season. The lack of both success and managerial consistency has caused Watford to undergo a variety of formations and player personnel. In this matchup, they lined up in a 4-4-2 with high defensive blocks and counterattacks in mind. Kiko Femenia and Adam Masina lined up as the full-backs next to Adrian Mariappa and Craig Cathcart. Ismaila Sarr, Will Hughes, Troy Deeney, and Gerard Deulofeu led the counterattacks, with mainstays Abdoulaye Doucouré and Étienne Capoue in the central midfield.

As stated, Watford’s game model involved a medium defensive block. They seemed to alter their defensive tactics throughout the match, choosing between a more aggressive front line press or an organised block depending on the position of the ball. 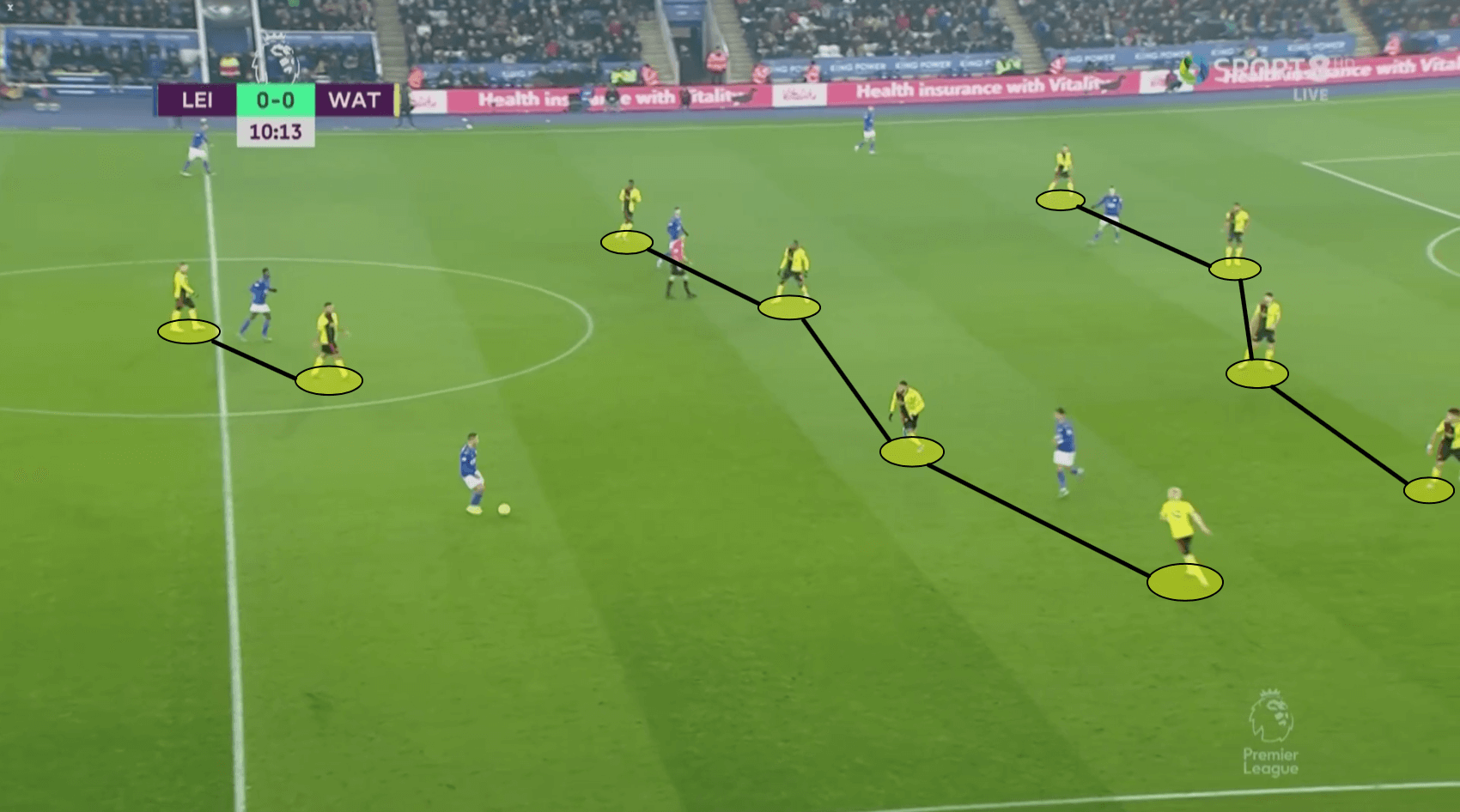 Here we can easily see Watford’s 4-4-2 block. While the structure at times was sturdy, the swathes of space both between the lines and across the width of the pitch allowed Leicester to exploit those areas. Utilising diagonal passes through the full-backs and wide midfielders, Leicester comfortably progressed the ball through the attacking half. 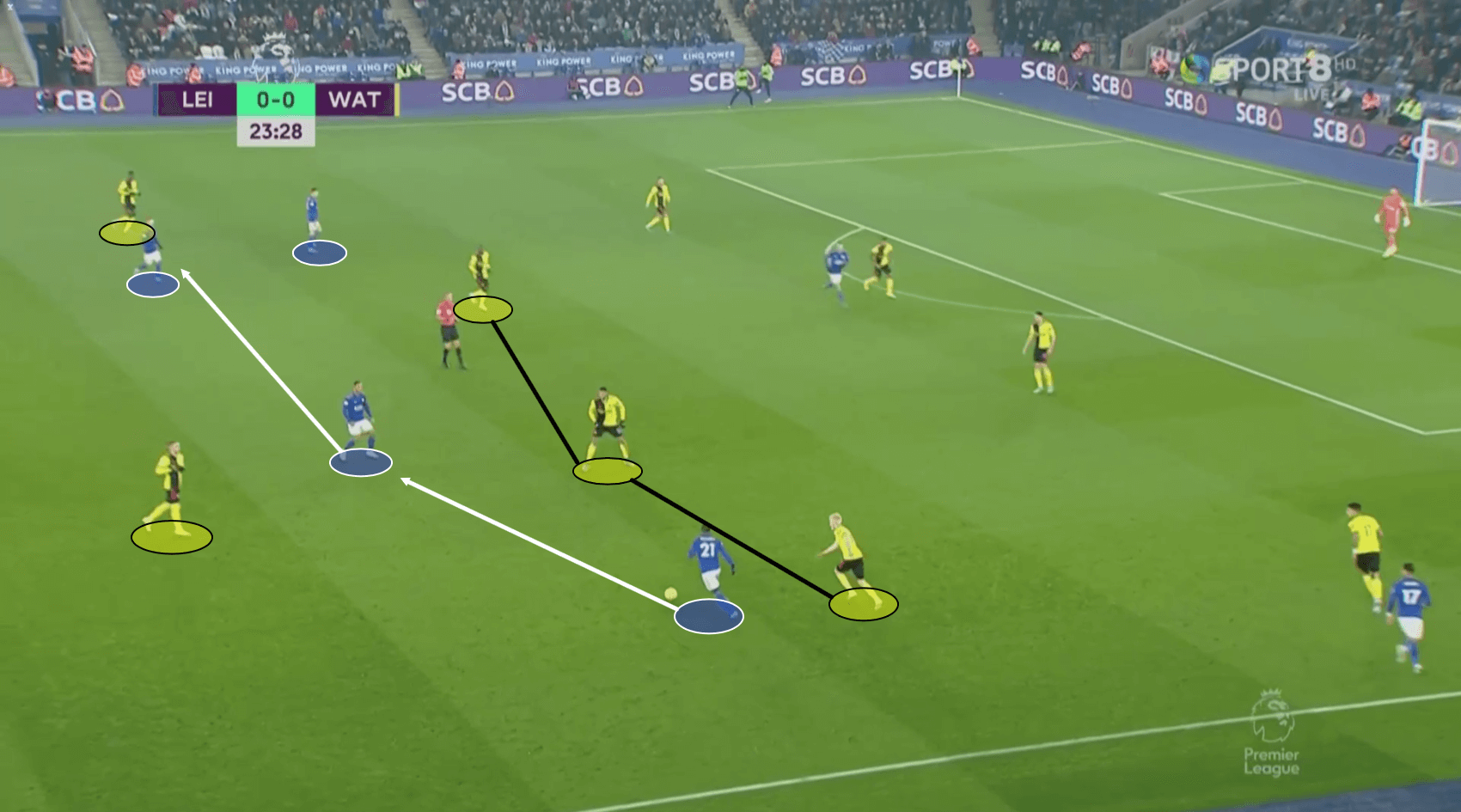 In the figure above, Leicester use the lack of press in the space between the lines to conduct a switch of play, from Pereira to Tielemans and eventually to Fuchs. 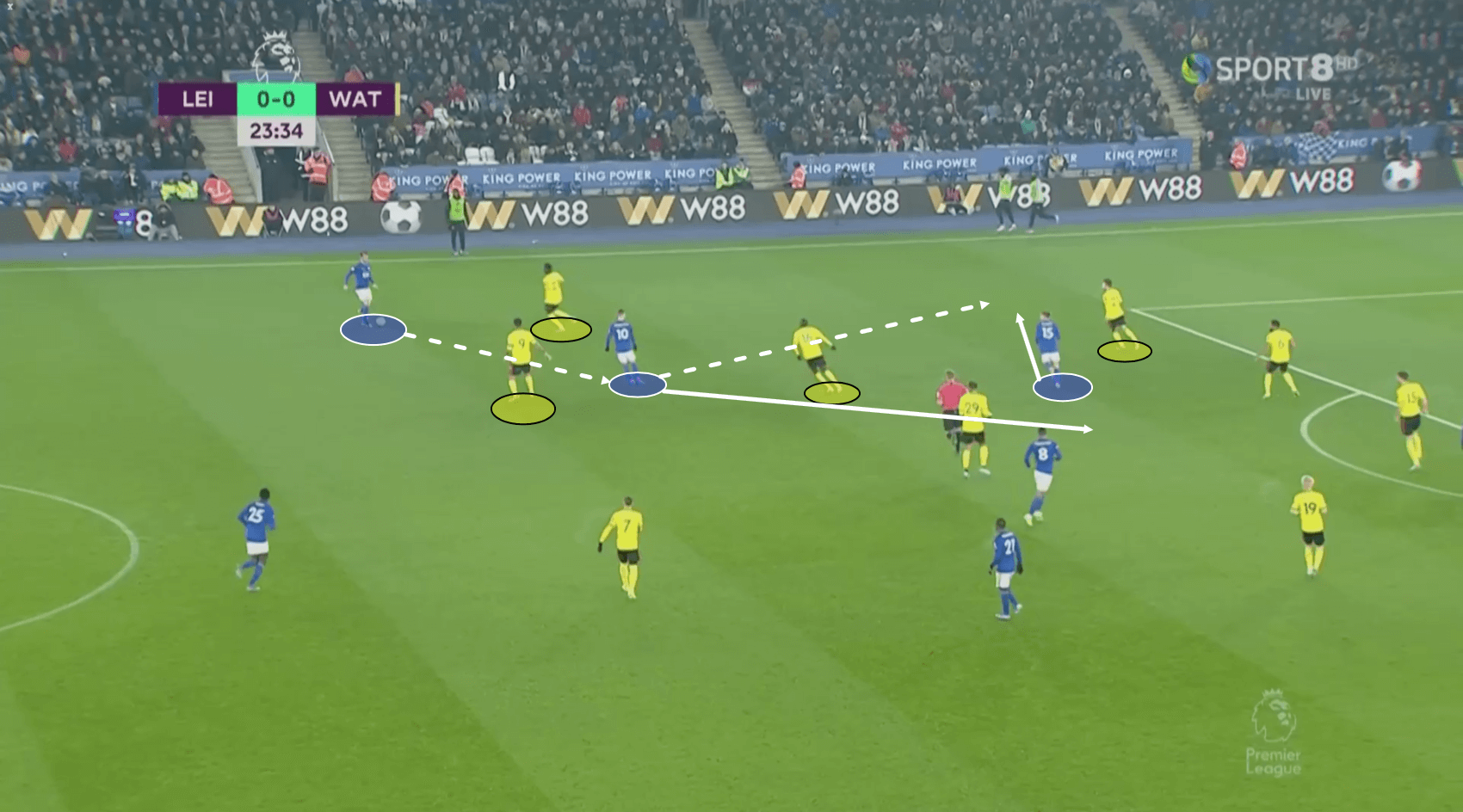 This ball progression continued into the final third, as many of Leicester’s attacks did throughout the match. After the successful switch of play, Maddison positioned himself in the space between the right midfielder, right-central midfielder, and right striker. Fuchs saw the open passing lane and passed the ball forward to the English attacking midfielder. Barnes meanwhile shifted wide between the back two defensive lines, allowing for a second diagonal pass to be completed. This horizontal and vertical progression by Leicester has been a key element in their league success this season.

Watford also initiated front line presses at times, but they were rarely effective until much later in the match. Instead, Watford found more, albeit limited, attacking success via counterattacks. 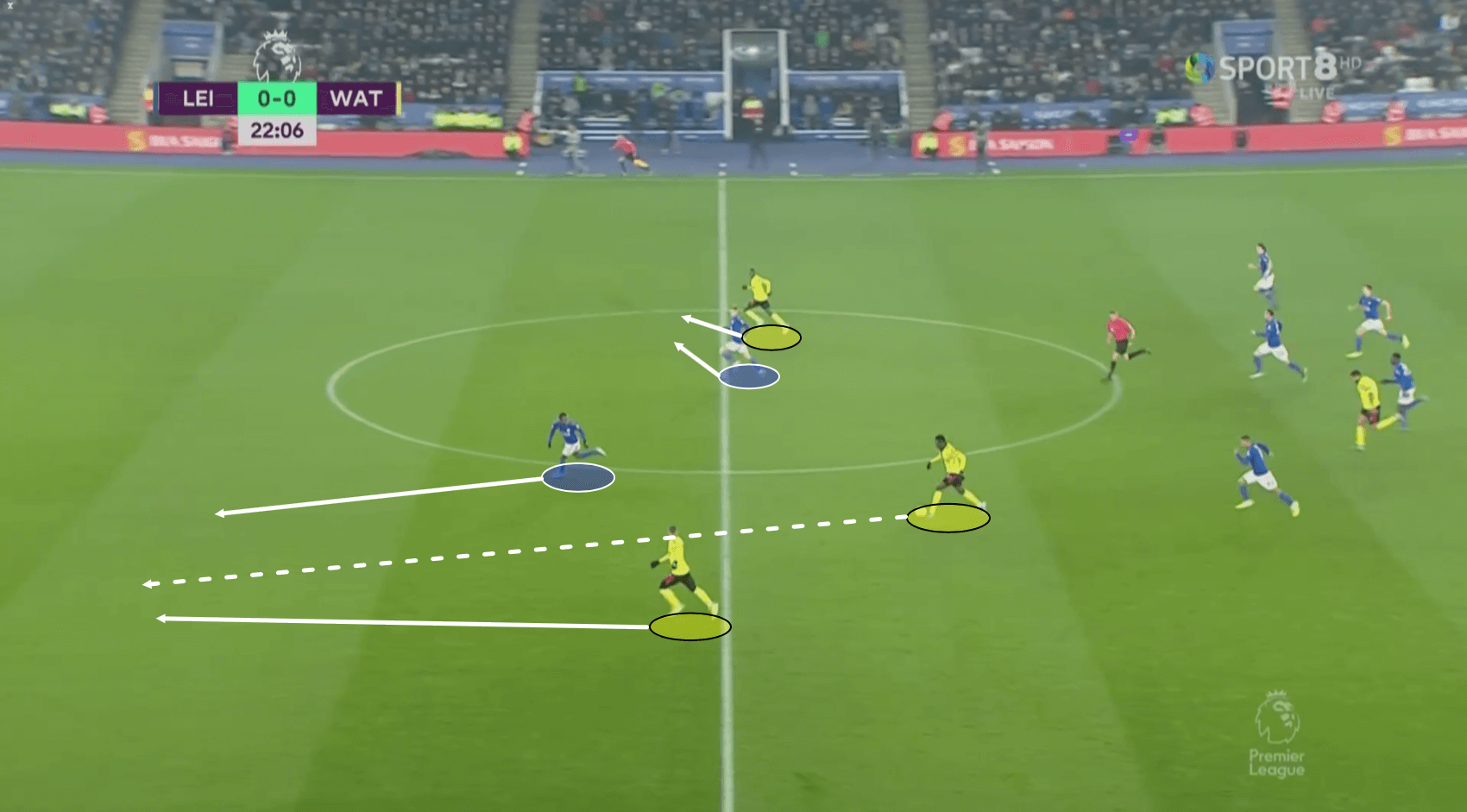 Off a counter, Watford began this counterattack in a 3v2 situation. The two Leicester defenders- Pereira and Barnes- opted to defend in an organised manner. Barnes marked the lone attacker on his side, limiting Watford into a 2v1. Pereira then managed to knock the ball out of play in the box off too light a pass by Sarr.

Counterattacks were Watford’s most successful methods of attack, and they attempted them constantly. The Hornets completed 37 of 61 long passes, out of a total of 326 passes. Eventually, Watford were able to string together a series of quick attacking passes. 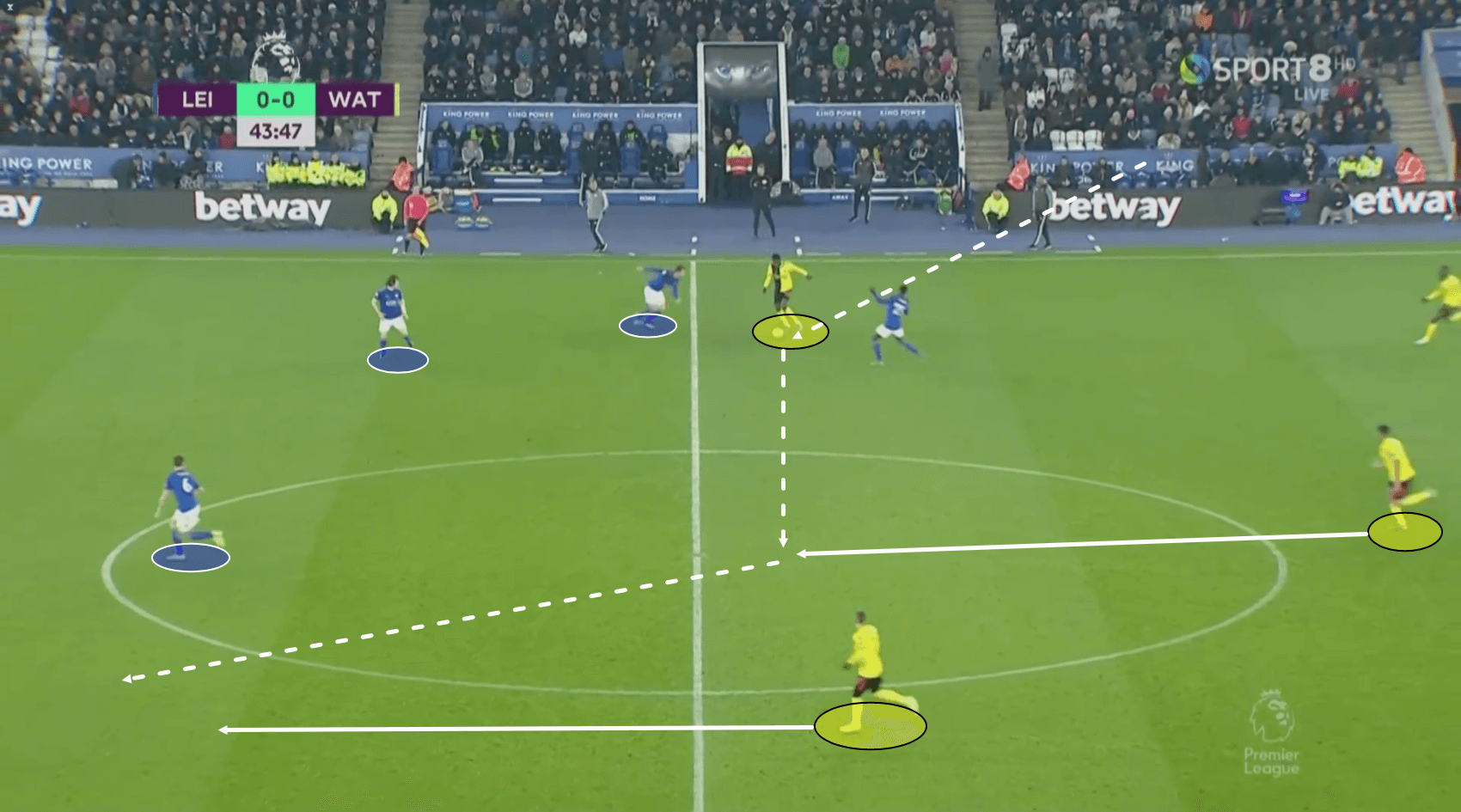 In this example, Sarr receives a long ball down the right side. Both Deeney and Deulofeu immediately push forward in attack, opening a switch of play to Deulofeu. 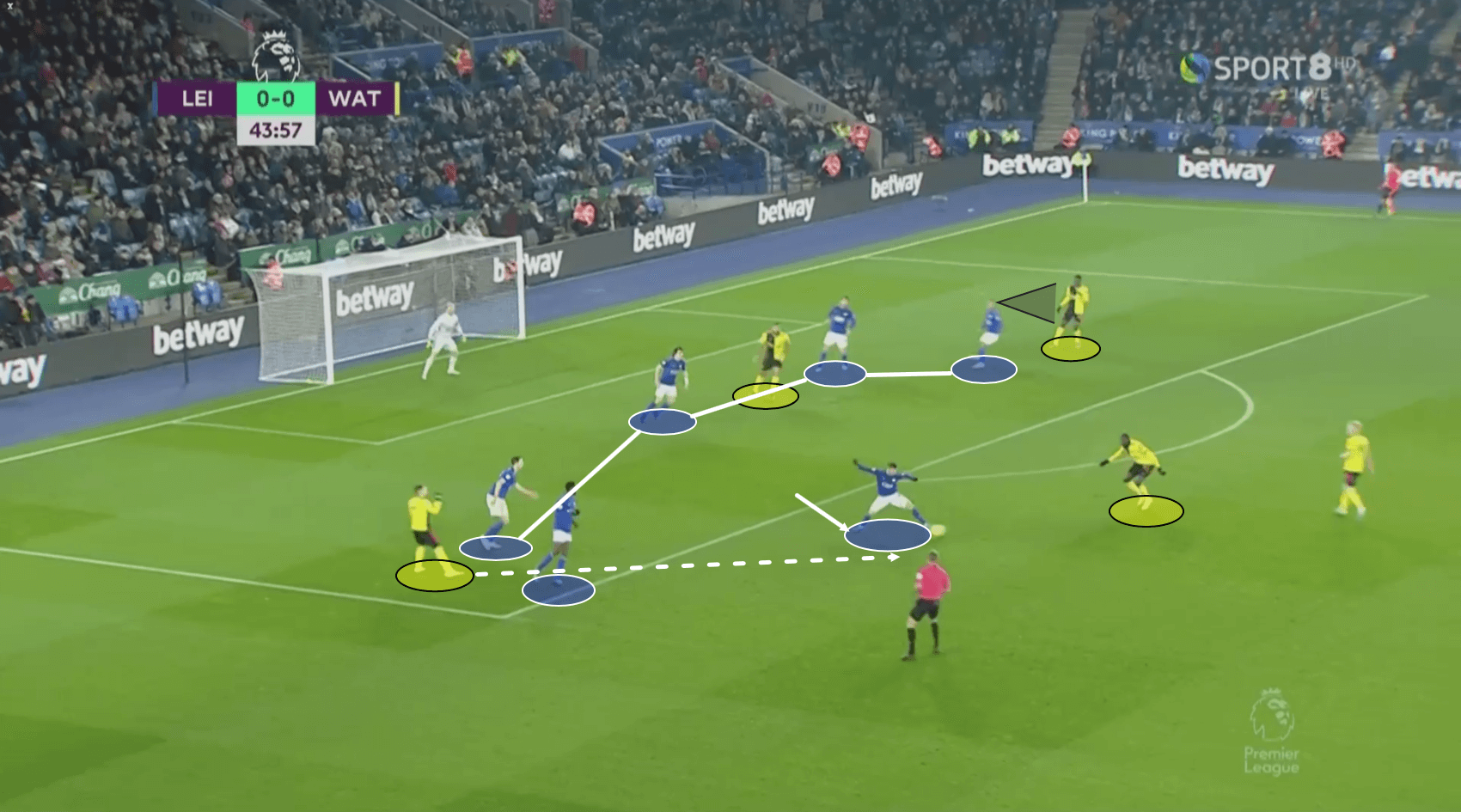 Ten seconds pass after the previous frame, giving Leicester enough time to reorganise defensively. The back line is disciplined enough to mark the three Watford attackers, and Maddison blocks the pass to the top of the box.

Ultimately, Leicester’s high amount of time in the attacking third eventually led to Vardy converting a penalty in the 55th minute. The striker now leads the Premier League in goals by three, ahead of Chelsea’s Tammy Abraham.

The effects of increased pressing

After the opening goal, Watford’s press intensified. While this limited the more open progression by Leicester seen in the first half, it also opened up more space in the defensive third, resulting in better goalscoring opportunities for the hosts. As a result, Leicester’s xG increased from just 0.37 in the first half to 2.02 in the second half. 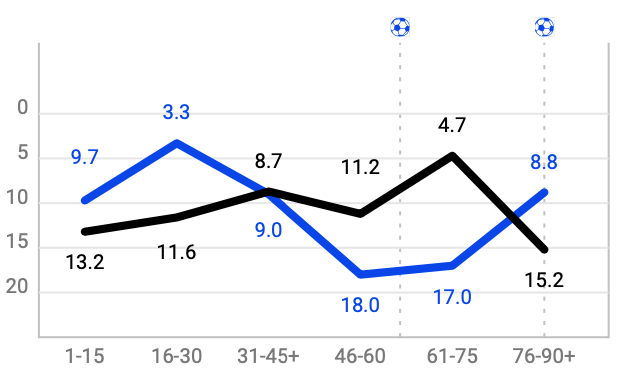 This PPDA(passes per defensive action) chart effectively shows the fluctuation of the press by both Leicester and Watford.

Shortly after Watford switched to a more attacking 4-3-3 after the substitution of Deulofeu for Isaac Success in the 77th minute, Leicester matched it with a back five formation, as full-back James Justin was subbed on for Barnes. This allowed the three centre-backs to each mark the three attackers, nullifying any chances. 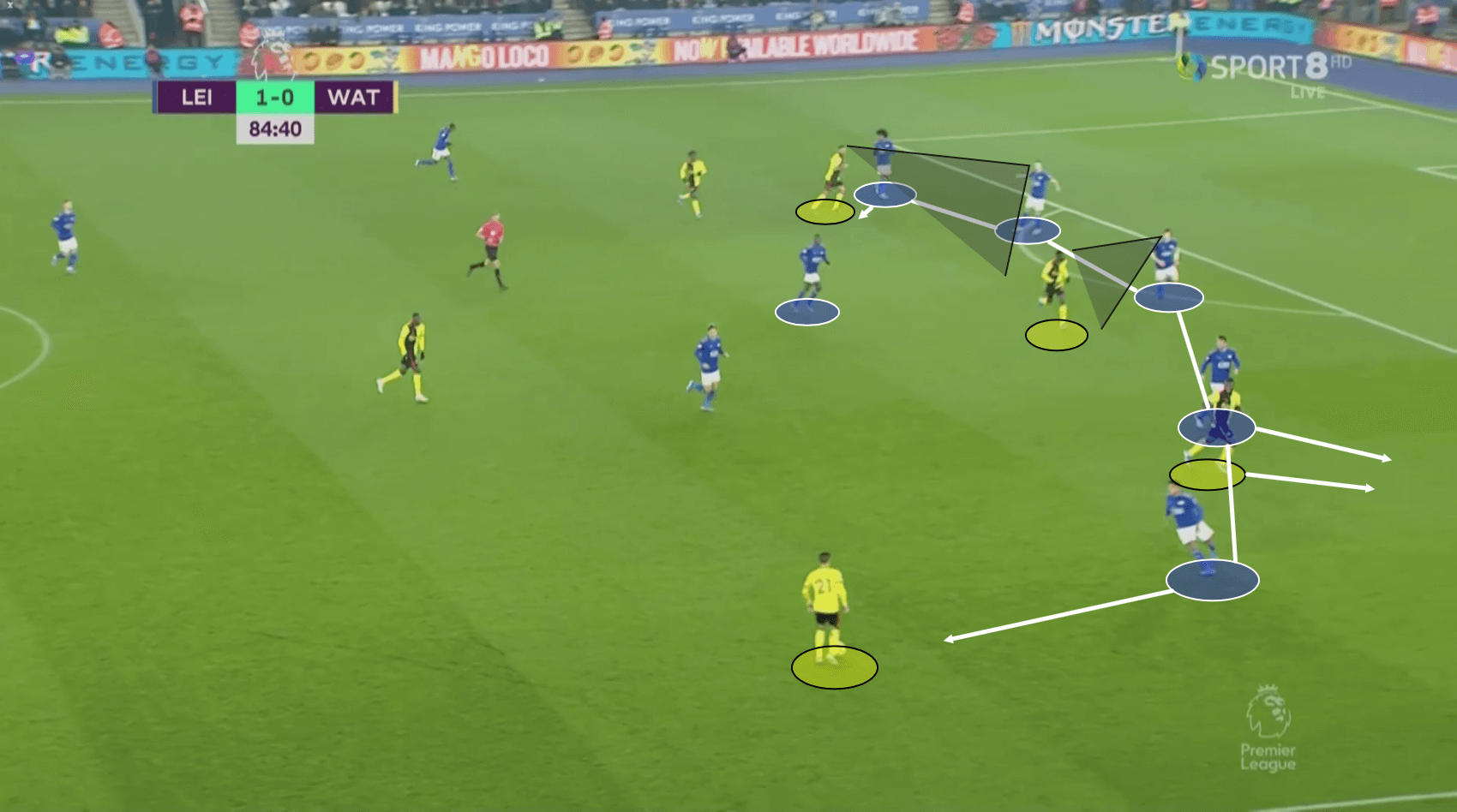 In the example above, Justin playing as a wing-back pressed the ball. The three centre-backs each marked the front three of Watford, and with Hamza Choudhury preserving the defensive width covering for Pereira on the far side of the pitch and Ndidi covering the central space above the back line, Leicester’s late defending was near impenetrable.

The defensive prowess and organisation of Leicester’s defensive block tired Watford, and allowed Leicester to increase their attacks late in the match and score their second goal. 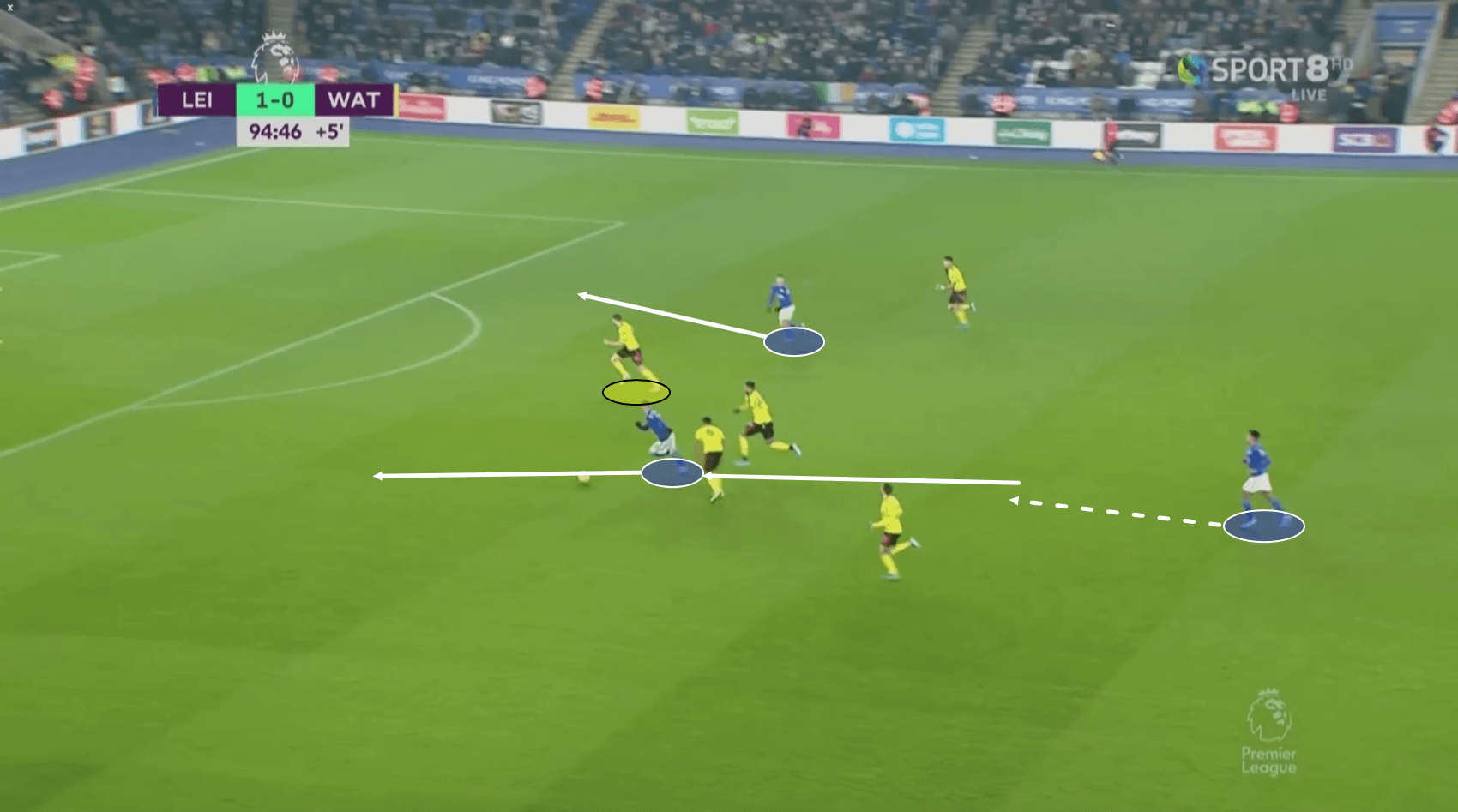 With less than a minute remaining, Leicester applied a direct attack against Watford’s high back line. After Maddison evaded two defenders, he found plenty of space in a 2v1 situation to capitalize on.

Leicester continue their winning ways. Unbeaten and unmatched since a loss to Liverpool on 5 October, eight consecutive wins in all competitions is further proof of this team’s resolve. The defence has only allowed a total of one goal in the last six league matches, and the attack has scored two or more goals in each of the last seven. Sustaining this consistency at this high of a level isn’t easy, and upon analysis Leicester are arguably still under-appreciated considering their current standing.

Watford, on the other hand, continue to struggle in nearly all areas of the pitch. Their inconsistencies and lack of organisation this match hindered their defensive success. The Premier League season is long, but Watford must improve if they are to have any chance of survival.