The big Premier League match of the weekend featured Tottenham Hotspur visiting Manchester City. The game did not disappoint as it ended in a controversial 2-2 result. VAR disallowed a Gabriel Jesus goal to snatch the victory from Manchester City in stoppage time. Manchester City saw Raheem Sterling and Sergio Agüero with goals. Tottenham countered with goals from Érik Lamela and substitute Lucas Moura.

The wild match was largely dominated by Manchester City. The shot count from Wyscout was 28-3 in Manchester City’s favour. The xG was 3.24 to 0.18 and possession was 58% to 42% all for Manchester City. It was a dominant performance everywhere except the scoreboard.

This tactical analysis will look to provide an in-depth analysis of the interesting tactical battle in the 2-2 draw. Tottenham had clear tactical intentions to eliminate Manchester City’s attack from getting to the end line on the right for a cross on the ground. Through focusing on taking away Manchester City’s common tactics on the right, Tottenham left themselves vulnerable on the backside.

Manchester City came out in a 4-2-3-1 formation. Ederson got the start in goal behind the back four of Oleksandr Zinchenko, Aymeric Laporte, Nicolás Otamendi, and Kyle Walker. The midfield was anchored by Rodrigo with İlkay Gündoğan alongside. There were three attackers in Raheem Sterling, Kevin De Bruyne, and Bernardo Silva with Sergio Agüero up top.

Tottenham countered with a 4-2-3-1 with Hugo Lloris in goal, Kyle Walker-Peters on the right of defence, Danny Rose on the left and Toby Alderweireld and Davinson Sánchez in the centre of defence. The midfield had double holders in Harry Winks and Tanguy Ndombélé, while Christian Eriksen, Érik Lamela, and Moussa Sissoko were underneath Harry Kane. 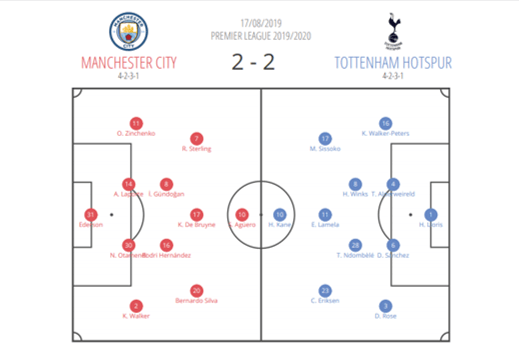 Manchester City overload on the right

A staple of the Manchester City attack down the right is to get an overload. De Bruyne moves into the half-space, Bernardo Silva stays wide and Walker joins to create an overload. Tottenham came into the match with a clear intention to nullify the overload by getting four players into the danger area.

The image below shows Silva on the ball with De Bruyne in the half-space. For Tottenham, Sánchez, Rose, Eriksen, and Ndombélé position themselves to avoid getting overloaded. Notice how both Eriksen and Rose are communicating the presence of De Bruyne. They are being intentional in their tactics. 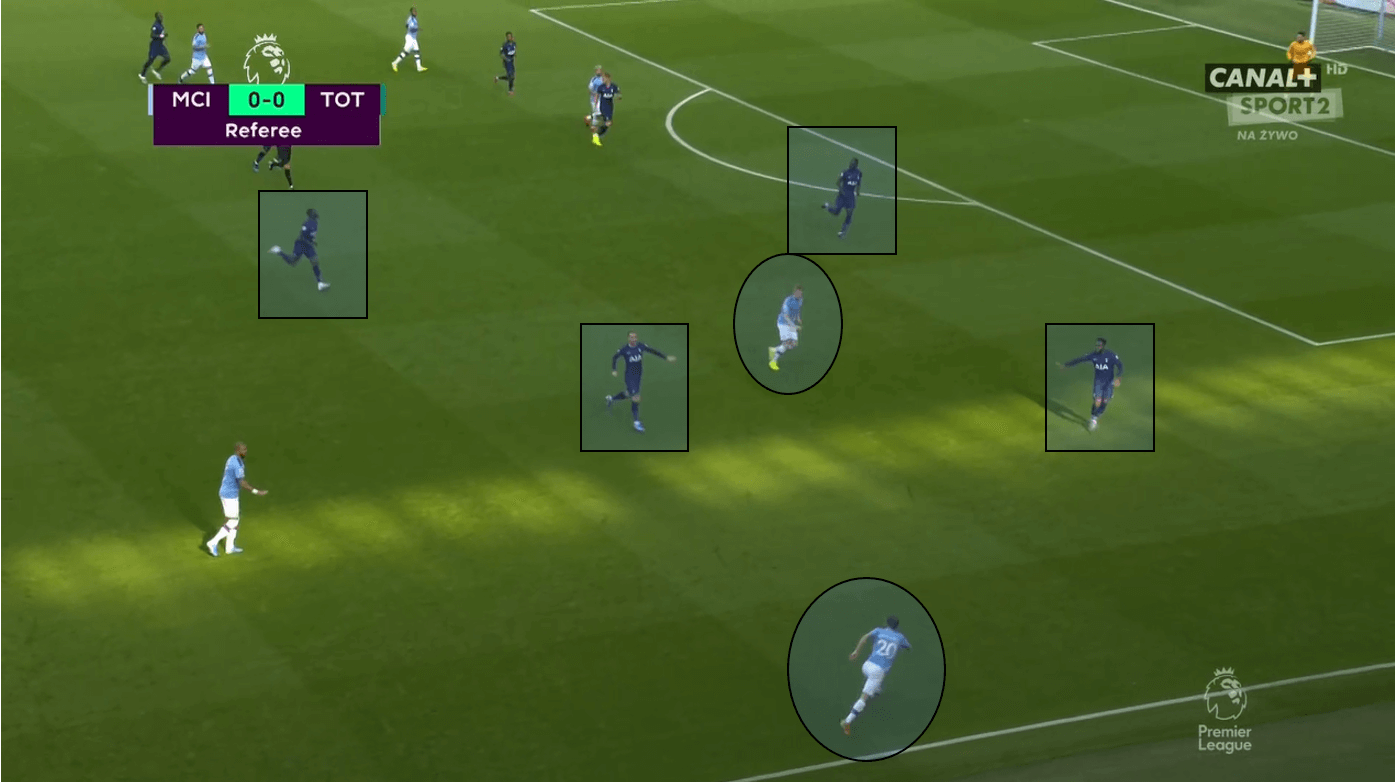 The primary goal of the Manchester City overload on the right is to get an attacker to the end line for a cross on the ground into the box. This common strategy sees Manchester City attackers queue up on the backside for darting runs onto a driven cross across the ground.

The next image shows Silva and De Bruyne attempt a one-two to get into the area shaded in red. Tottenham surround De Bruyne to nullify the return pass. 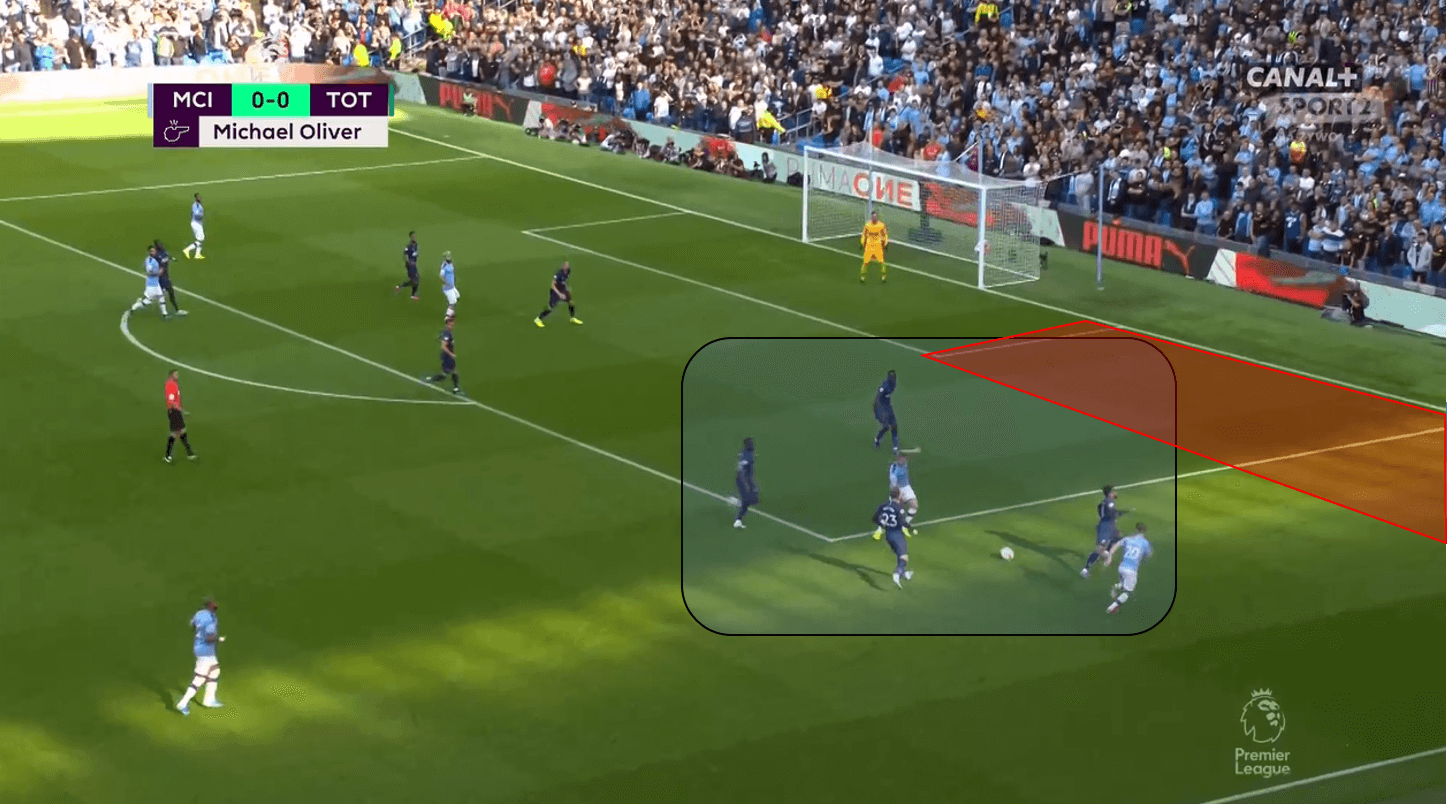 The result of the Tottenham defence is De Bruyne being surrounded with no dangerous passing options. The trade-off for Tottenham committing four defenders to prevent the Manchester City overload is they have one less defender on the backside. The next image shows De Bruyne surrounded as Tottenham sacrifice a backside defender. Note the free player, Sterling, on the backside of the box. 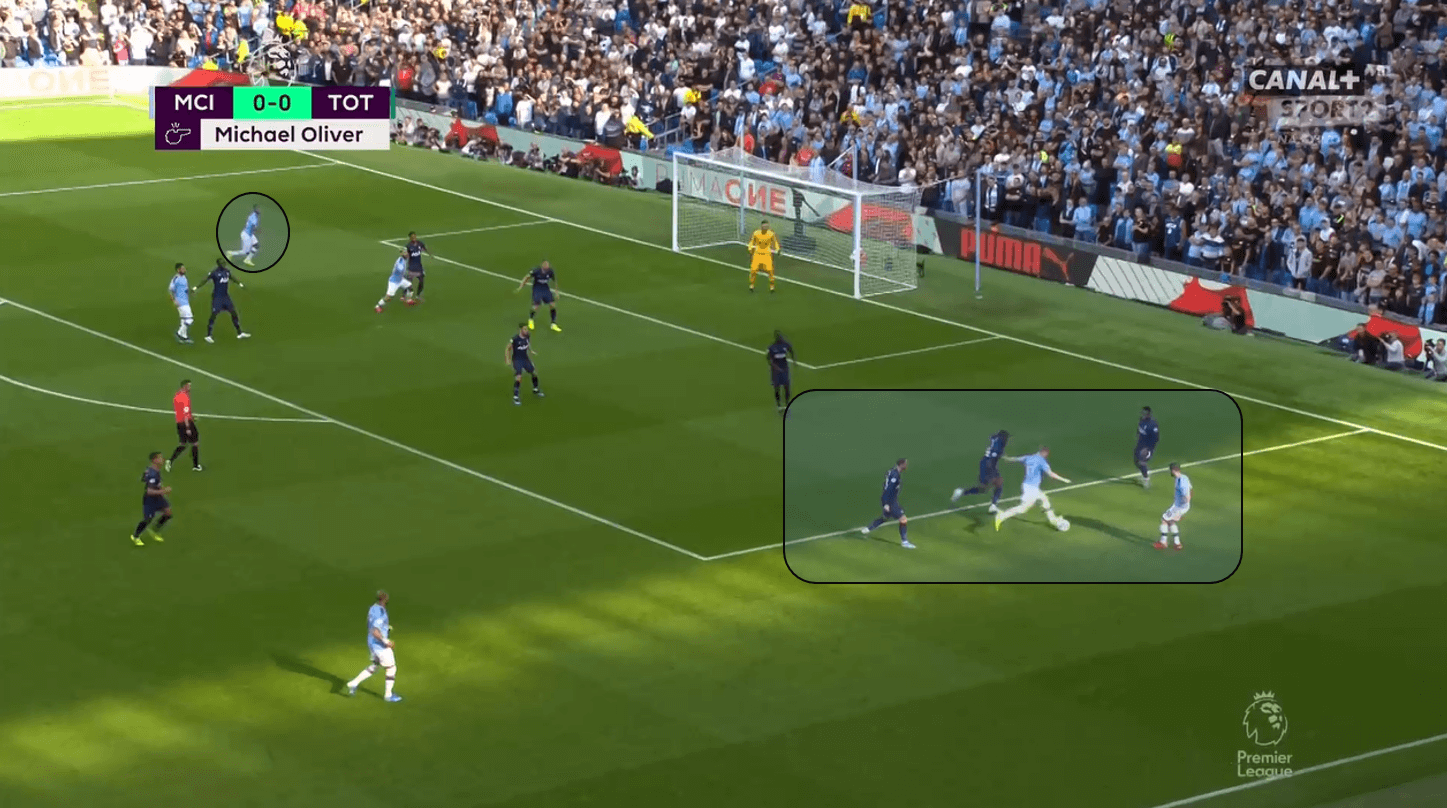 Tottenham’s tactical trade-off in bringing an extra defender to the ball side to eliminate the overload was leaving an unmarked Sterling on the backside. Tottenham were gambling on taking away the Manchester City strength of getting to the end line, banking that Manchester City would not hurt them with a cross in the air to Raheem Sterling.

Here is another example of Tottenham’s determination to take away the right-side overload. Below we can see that Silva is on the ball in a one vs one with Rose. 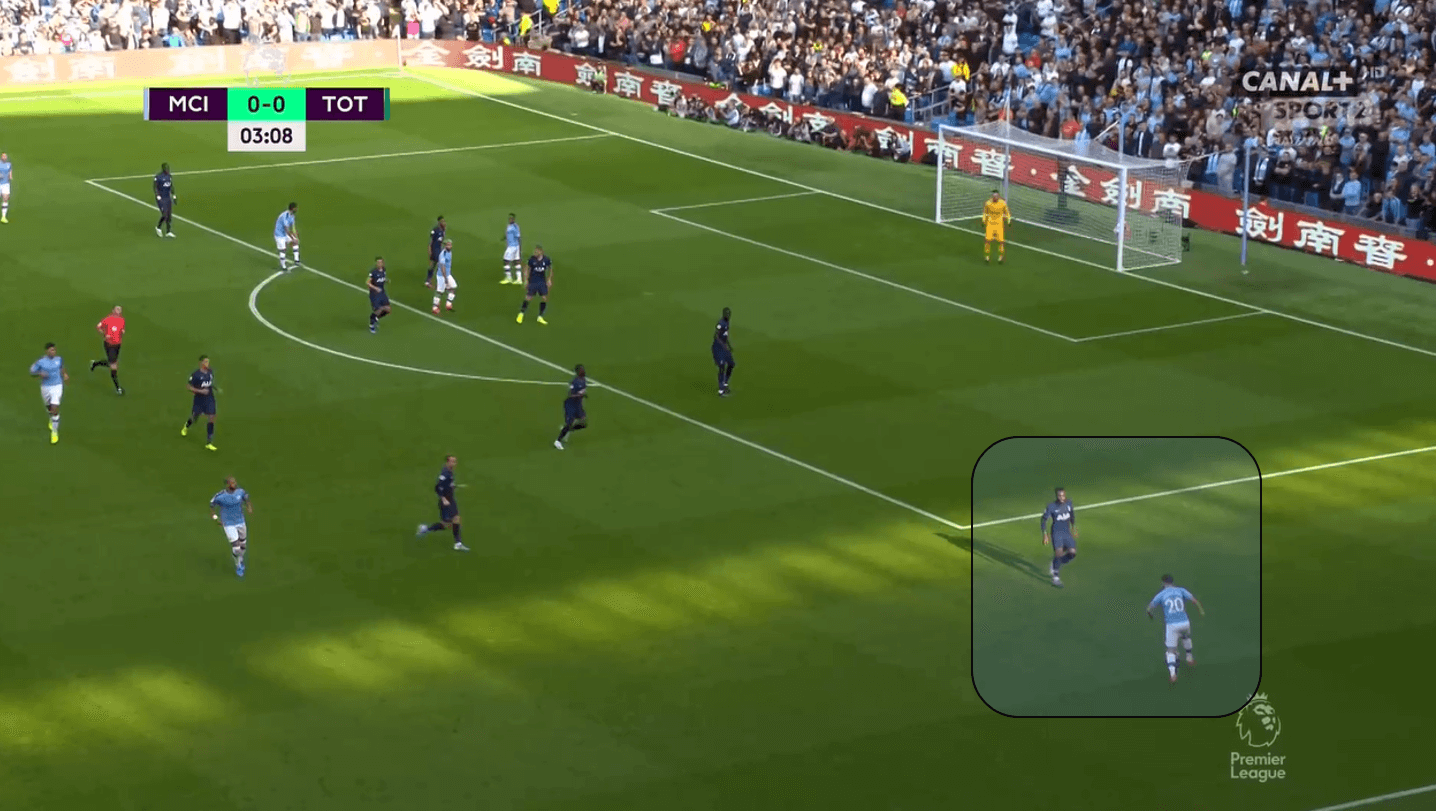 Tottenham send the cavalry over to the right side to eliminate the potential overload. As Sánchez, Eriksen, and Ndombélé quickly move into position. Silva is surrounded and forced negative. Notice the three Manchester City players queueing up for runs at the backside. 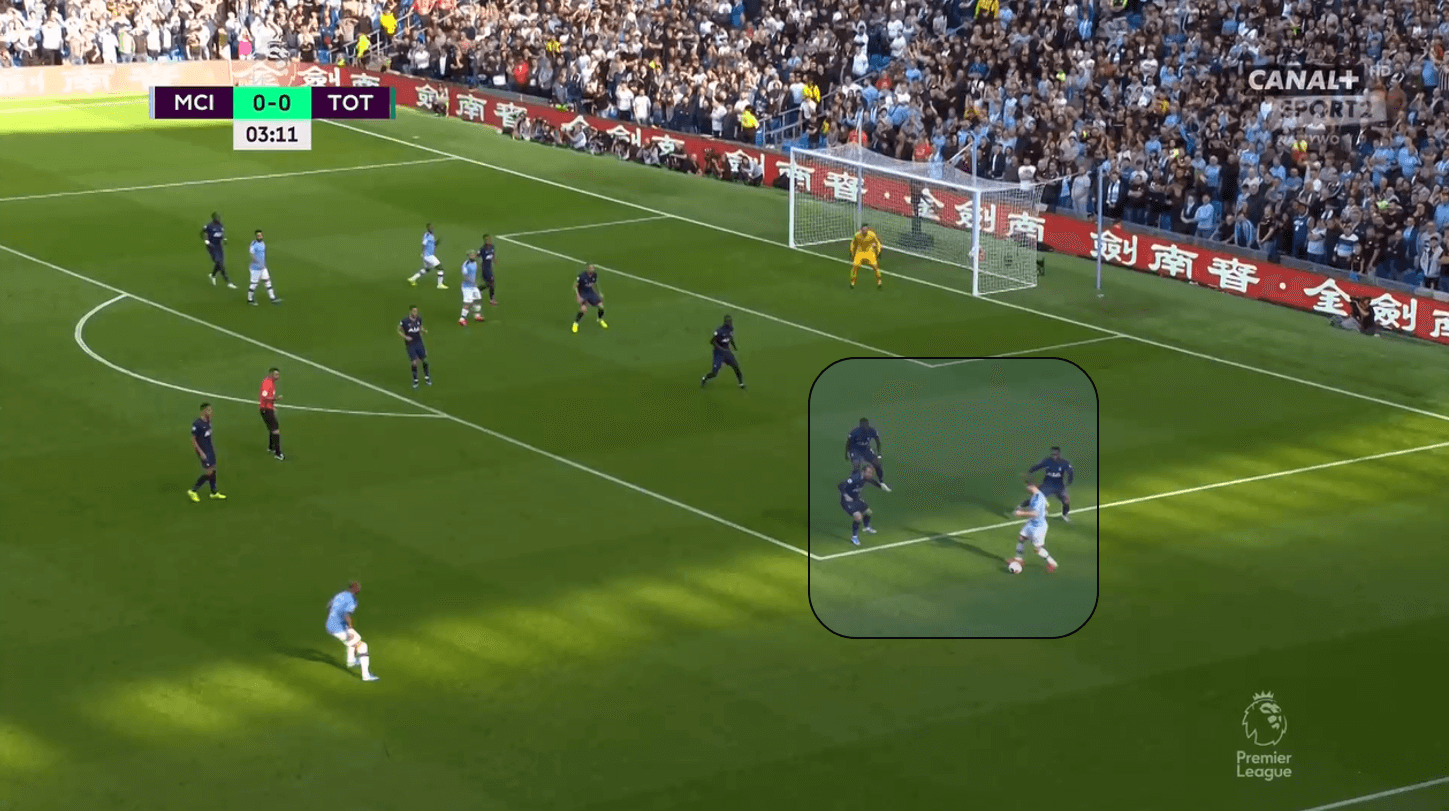 Tottenham’s focus on the overloaded side forced them to give up the extra defender on the backside of the defence. Against Manchester City, you can not take everything away. Tottenham were taking a calculated risk that Manchester City would not be able to capitalise on a cross in the air to Sterling. Kevin De Bruyne’s technical and tactical brilliance ruined Tottenham’s calculated gamble.

De Bruyne in the next build-up shows why he is one of the top players. Silva again has the ball on the sideline with Tottenham organising themselves ready to take away the Manchester City overload. Take note of how Rose is communicating while the Tottenham players are getting into position. De Bruyne is surveying the play while three Manchester City attackers are queueing up on the backside. 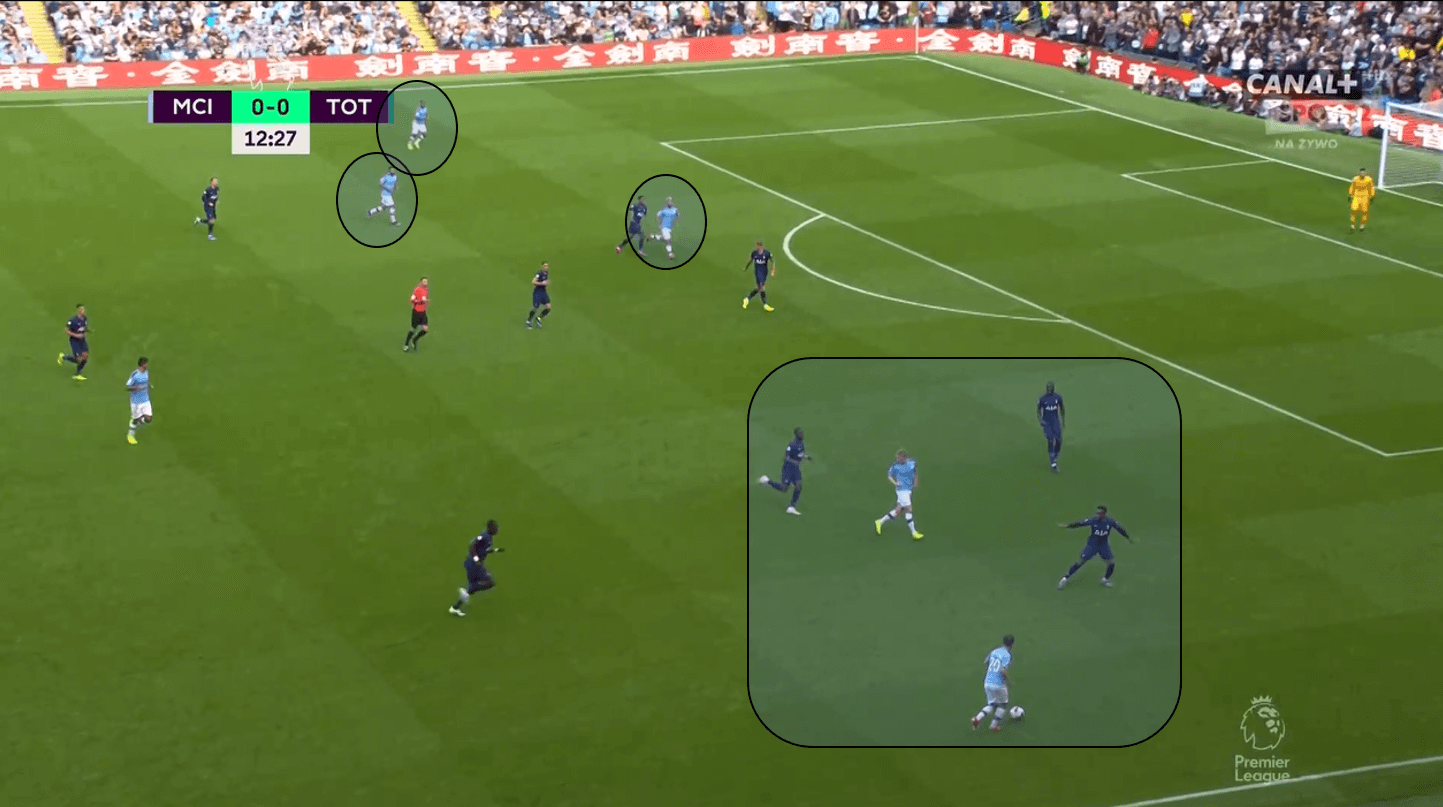 Tottenham are anticipating taking away the combination play going towards the sideline. De Bruyne instead of running into the box, pulls off the defence to position for a cross. 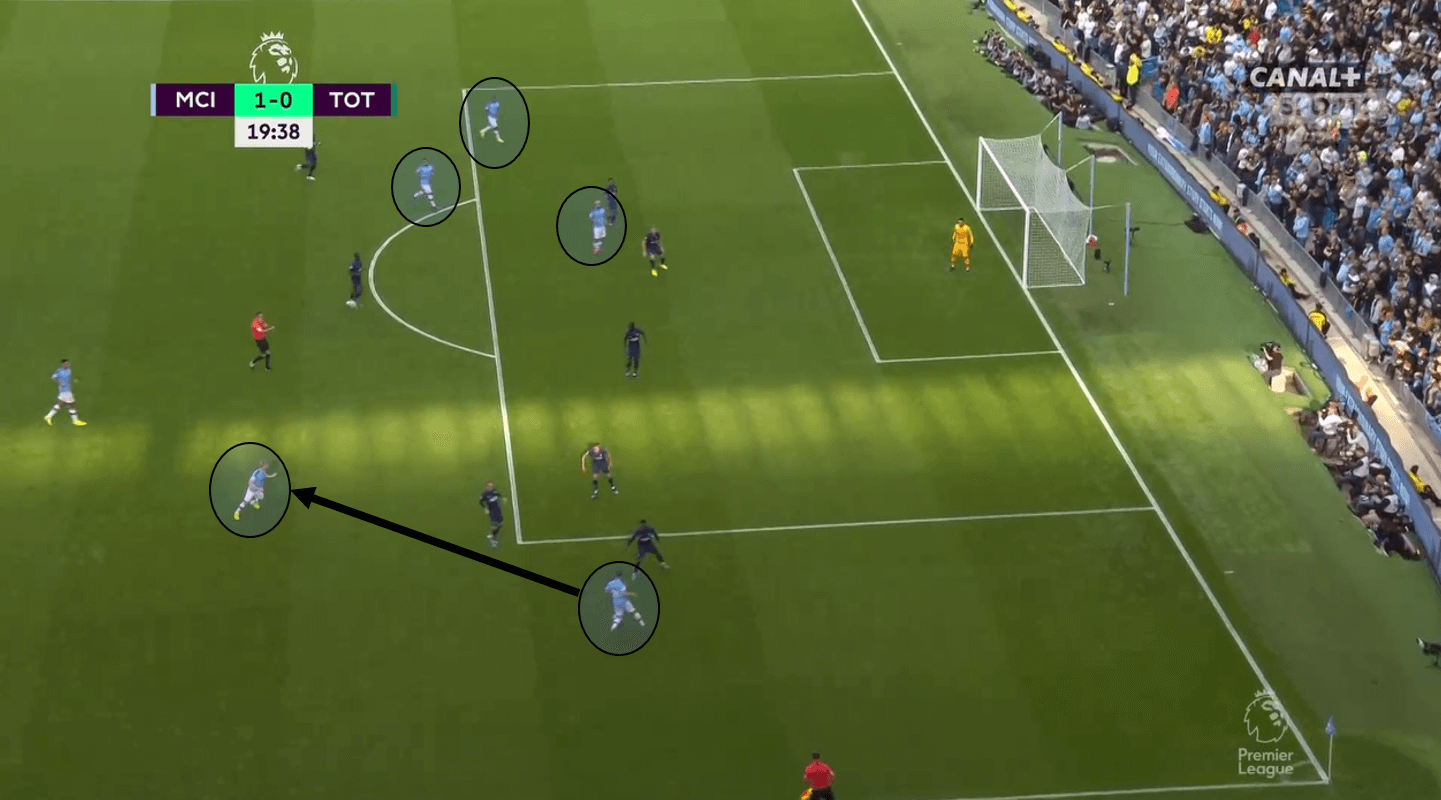 De Bruyne drops away from the defensive pressure and sends a perfect cross to the backside and the wide-open Sterling. The Manchester City attackers are now three vs two in attacking the cross. 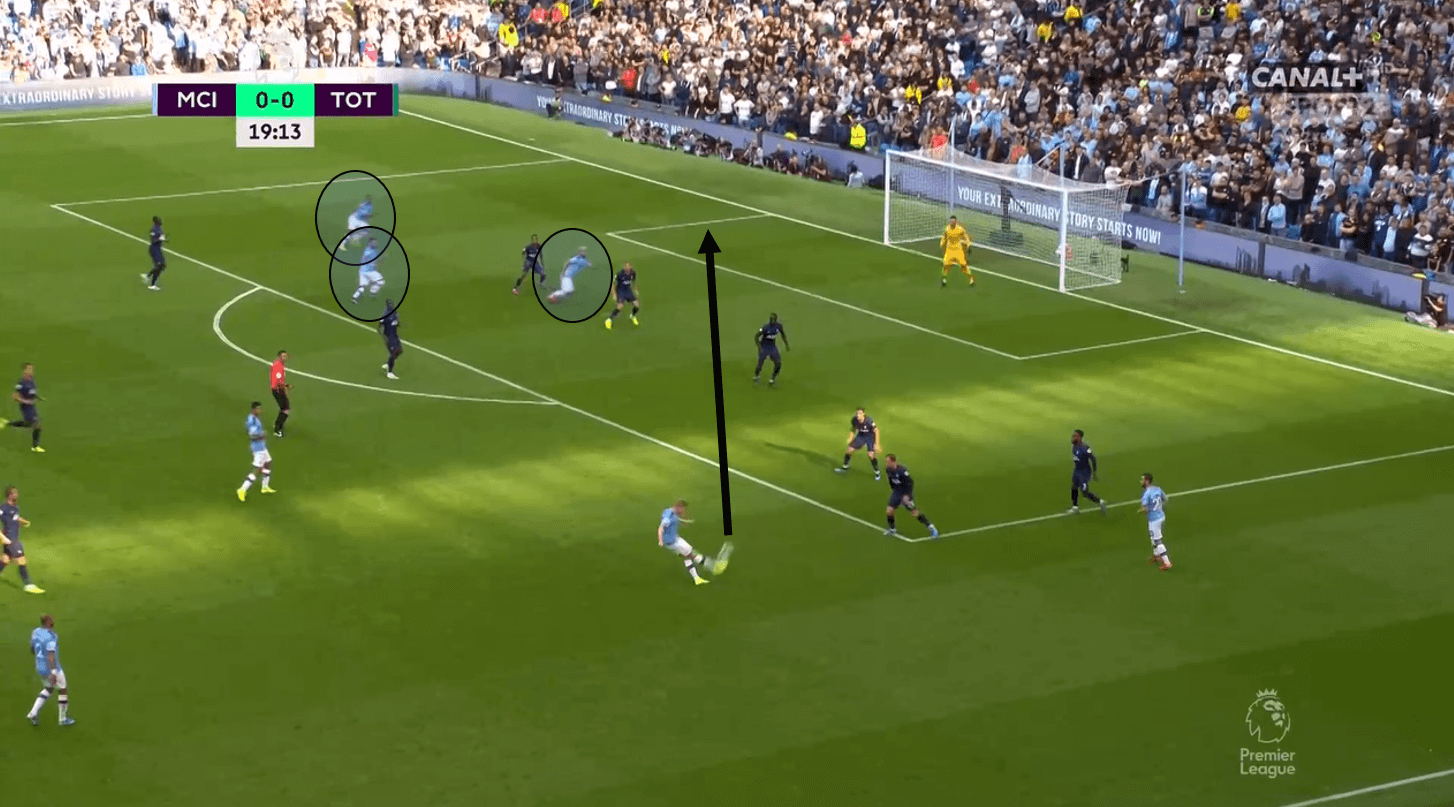 The Tottenham numerical gamble does not pay off as Sterling buries the header. 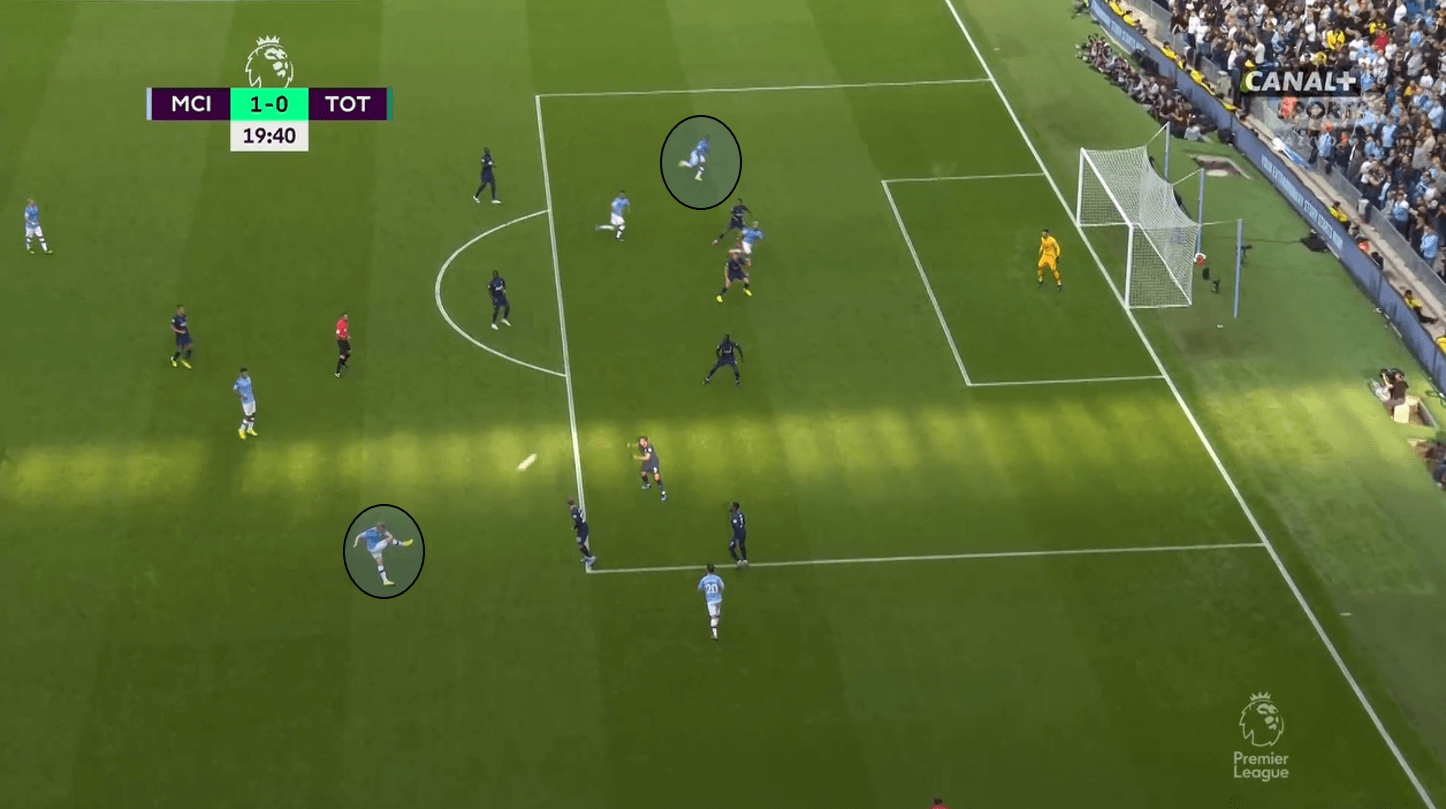 Why did Tottenham take the numerical gamble?

Hindsight might lead to asking why Tottenham would take a gamble to be numerically disadvantaged on the backside. The answer lies in the one instance that Manchester City successfully got to the end line on the overloaded side.

Next is our typical picture from the match with Walker on the ball and Silva and De Bruyne on the sideline and half-space. The Tottenham defensive foursome is positioning to eliminate the overload. 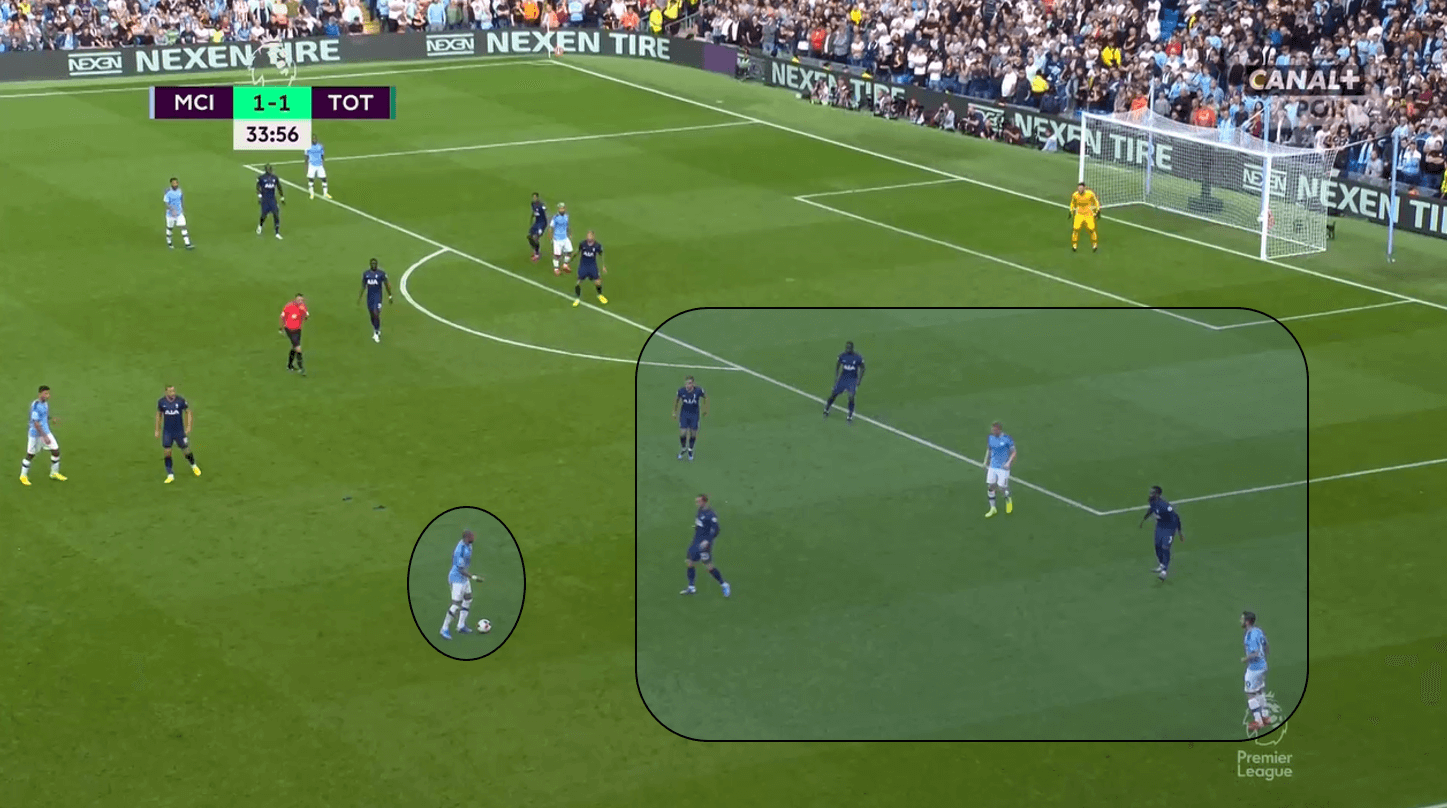 Instead of eliminating the combination play towards the end line, Sánchez is caught ball watching. Walker plays into Silva, who then finds De Bruyne as the third man runner. 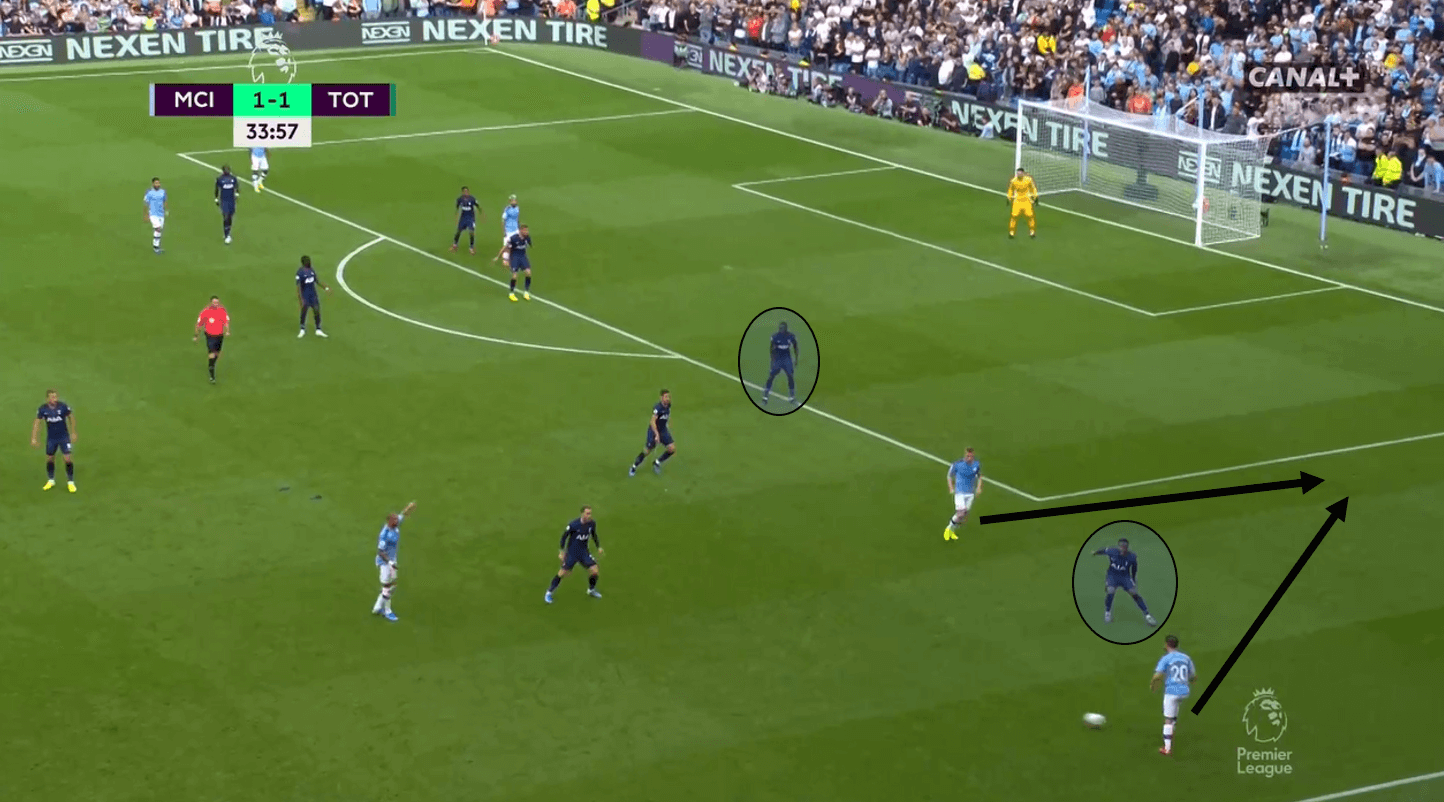 De Bruyne gets the ball on the end line resulting in a patented Manchester City goal from Agüero. 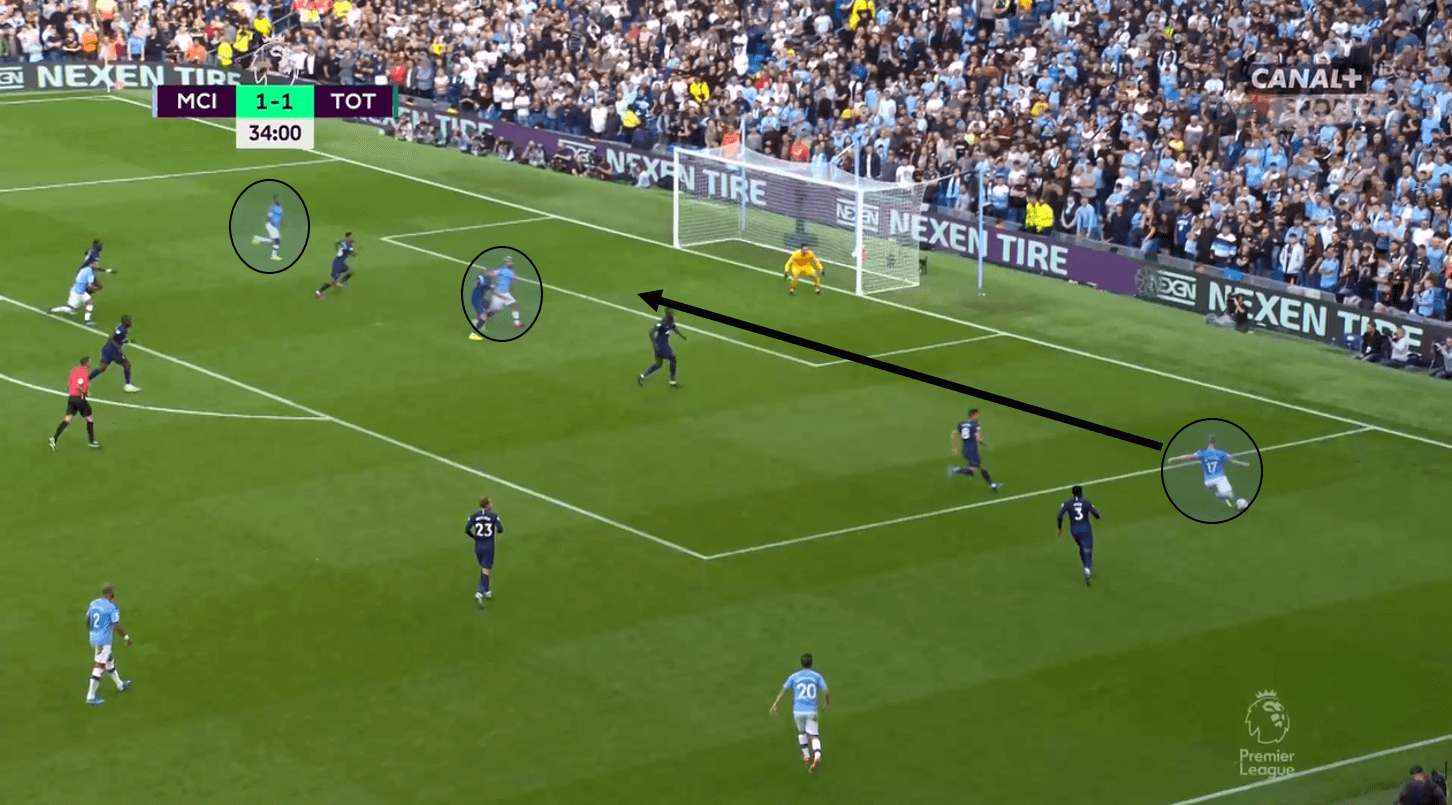 Tottenham were gambling on a ball over the top to the diminutive Sterling being less dangerous than a ball from the end line being driven through the box.

The one time that Tottenham had a break down on the overloaded right side, there was a De Bruyne to Agüero tap in goal. 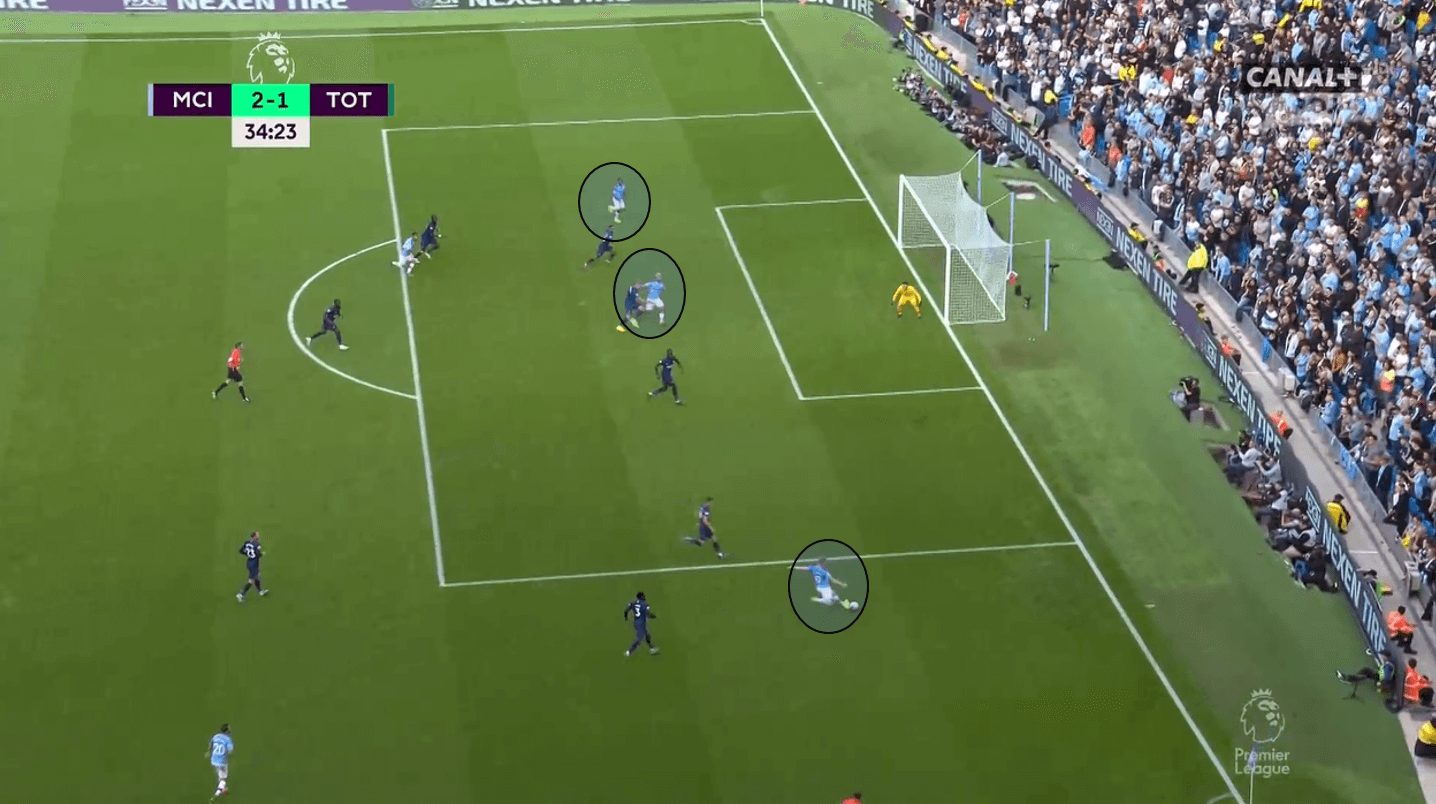 When game planning against Manchester City, you can not stop every attacking option. The goal that Sterling scored was an xG of 0.23 while the Agüero goal was 0.46. A calculated chance was taken and this case De Bruyne’s brilliance defied the math. Tottenham were successful in only allowing one end line attack to come down the right. 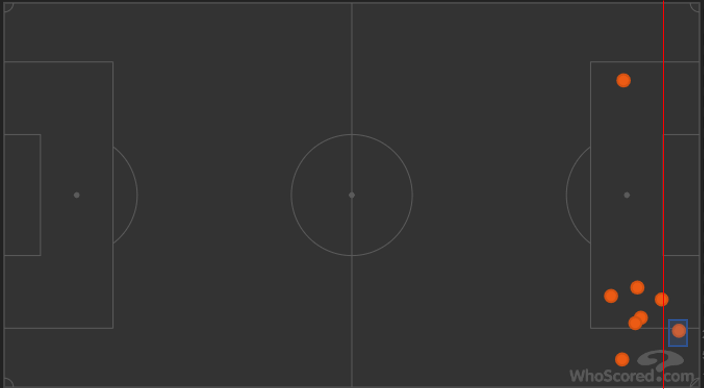 The previous graphic from WhoScored.com shows the lone Manchester City end line ball on the ground chance which was predictably a goal. Tottenham tactically focused on numerically shutting down the signature Manchester City overload on the right attack with some success as they gave up only two goals from 28 shots.