Arsenal hosted relegation-threatened Watford to the Emirates for what was both teams’ final game of the Premier League season. Arsenal won 3-2, however like some of their more recent performances, they did so in unconvincing fashion.

The faces of the Watford players at the final whistle showed how bitter of a defeat it was, a defeat that ultimately saw them relegated from the Premier League on the final day of the season. This was not helped by the fact that their xG of 4.07 would suggest that they perhaps should have come away with all three points. By doing so, they would have certainly escaped from the dreaded dotted line and remained a Premier League side for the forthcoming season.

The tactical analysis below tells the story of the game as it happened; in this analysis, we take a closer look at the tactics, key players, and big decisions from both managers throughout the game in this five-goal thriller. 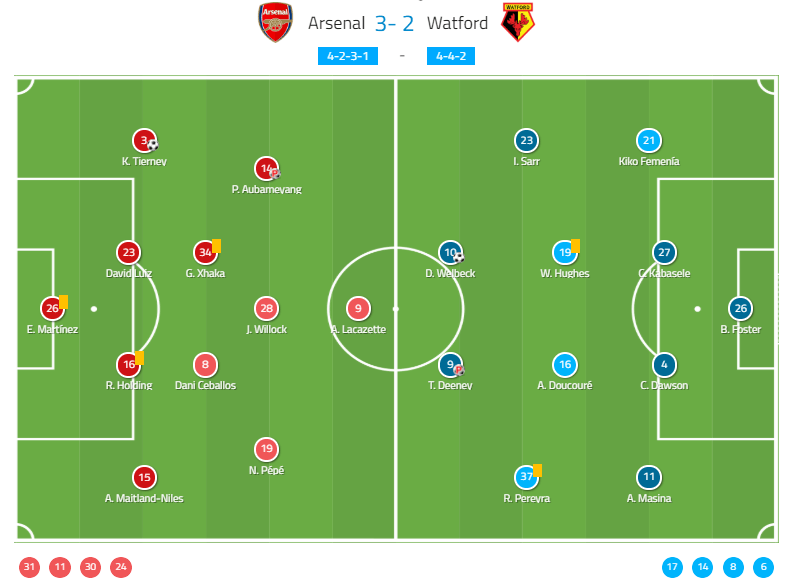 Arsenal: 4-2-3-1
Arsenal boss Mikel Arteta reverted back to a formation that had seen his side come away with some big victories since his appointment. Starting in a 4-2-3-1, the Spaniard later switched to a 3-4-3 midway through the second half. Both wingers Pierre-Emerick Aubameyang and Nicholas Pepe played as inverted wingers cutting inside to engage in 1-v-1s and create high-value opportunities.

Kieran Tierney and Ainsley Maitland-Niles played as high, wide wing-backs who made runs to exploit the Hornets’ weak side as well as to provide dangerous crosses into the box. Dani Ceballos and Granit Xhaka controlled Arsenal’s play from the middle while Joe Willock and Alexandre Lacazette together played as the focal point of the attack.

Watford 4-4-2
Caretaker boss Hayden Mullens played a 4-4-2 which remained to the final whistle. Although it is the third different formation in three games, this perhaps gave Watford their best chance to come away with three points, as the xG of 4.07 would suggest.

Playing directly to the strikers as efficiently as possible from midfield and defence, Troy Deeney and former Gunner Danny Welbeck did well to trouble the Arsenal centre-backs while bringing wide players into the attack.

Ismaïla Sarr and Roberto Pereyra operated from the flanks, serving dangerous crosses to the Hornets’ frontmen while breaking down Gunners attacks out wide. Abdoulaye Doucouré and Will Hughes did superbly well to neutralise the inventive Arsenal midfielders while being quick in the transition to provide passes to forward runs and support the centre-forwards.

As we see so often from Arteta’s brand of football, he likes his team to have numerical superiority as his side play forward through the thirds. Here the Gunners build from a deep 4-2-3-1 to a high and horizontally stretched 2-3-5 in the final third, offering multiple options to penetrate centrally, out wide, and on the weak side of the opponents. 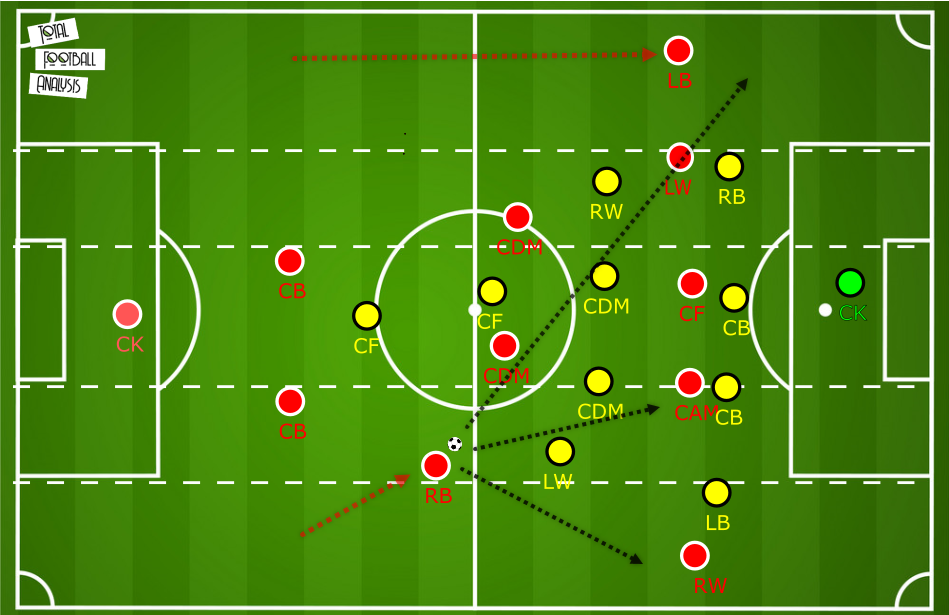 As the illustration above shows Arsenal in their 2-3-5 offensive shape, we can see how Arsenal develop multiple opportunities to penetrate across all zones, from the nearside flank all the way across to the opponents’ weak side. 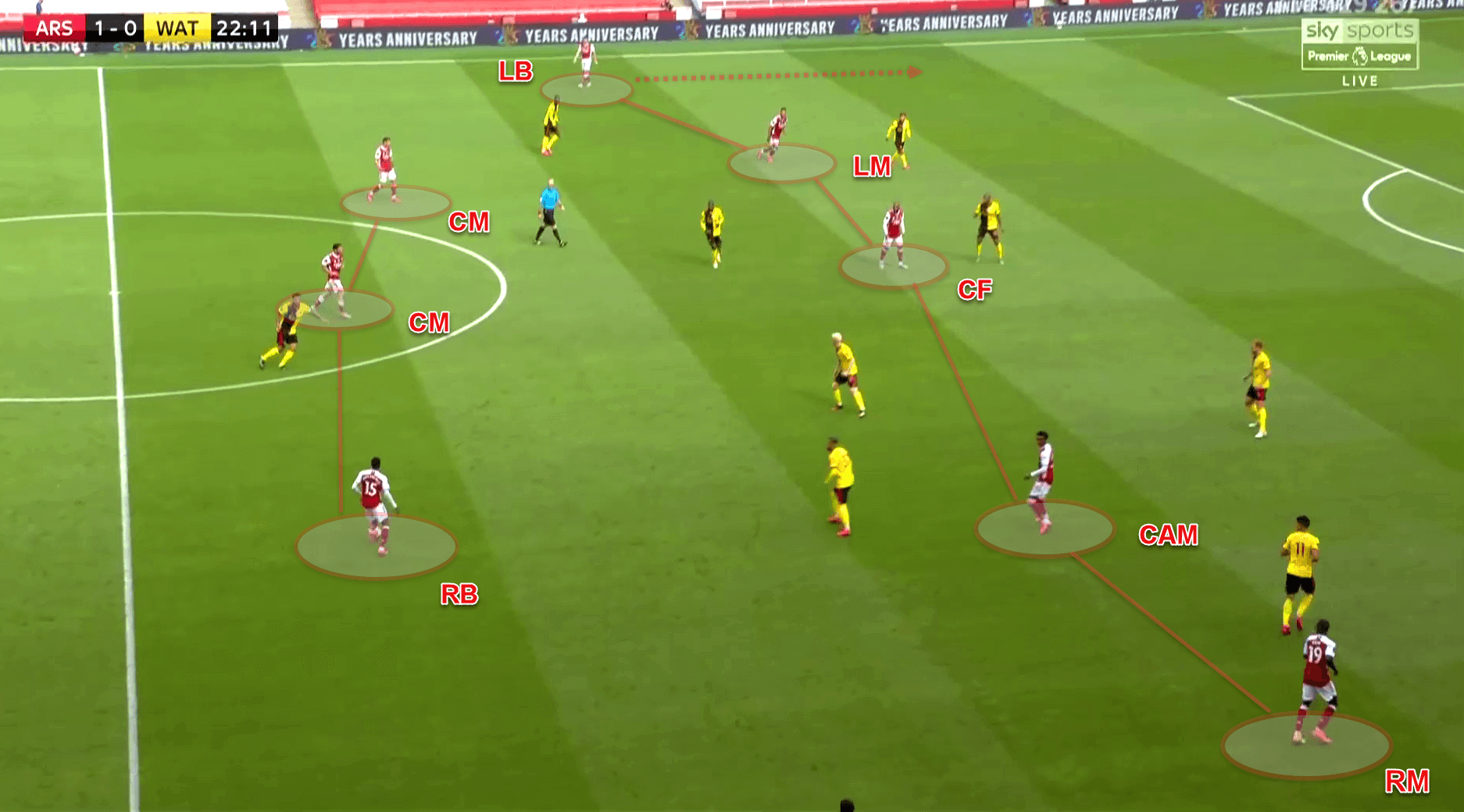 In the image above, we see a moment when right-back Maitland Niles adjusts his body to play a long pass to meet the run of the Arsenal left-back Tierney on Watford’s weak side. Notice from this image how the front five of Arsenal all serve to create an imbalance in the Watford back line while still moving to offer themselves as a forward passing option.

Arsenal did well in the first 60 minutes to control the game, as their possession stats would suggest the Gunners enjoyed spells of up to 65% possession, thus helping them along to an xG of 1.87. Through effective build-up play, the North Londoners created all three of their goals, even by winning the penalty in the first minute of the match and the subsequent goals from open play of the first half as the Gunners did so by building through the thirds so effectively.

Both teams positive in transition

Counter attacks alone came to ‘5’ each for both sides, with Watford pushing hard after conceding so early so the Hornets were keen to catch Arsenal on the break. In equal measure, the Gunners saw ample opportunity to exploit a stretched and disorganised Watford defence as they were applying with a lot of energy in attack. 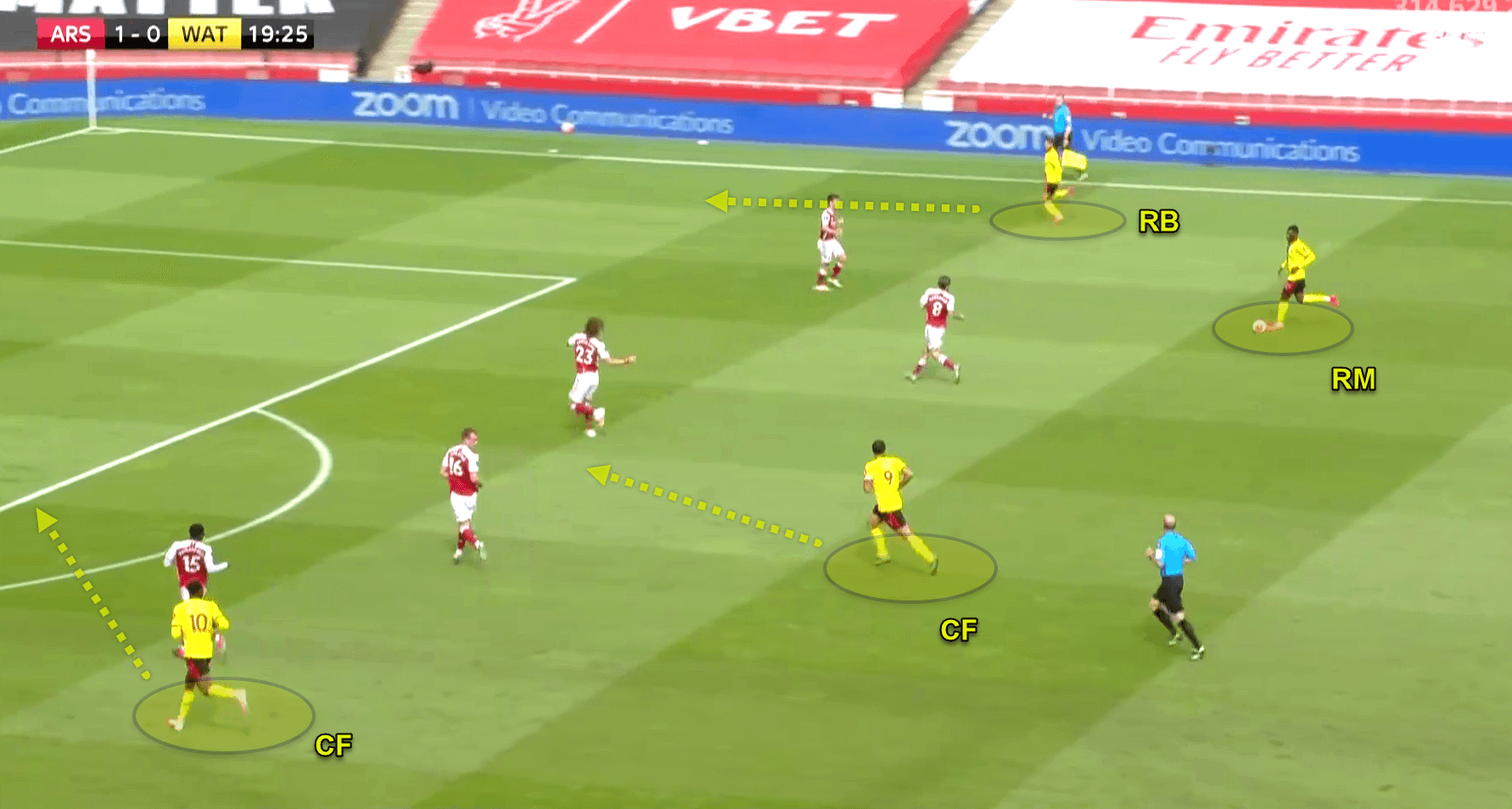 When Watford broke away in the attack, they were only able to do so effectively with the forward runs of the wide players to engage the Arsenal back line, thus not allowing them to press the ball carrier. With time and space to exploit, Watford would reach dangerous positions to play passes into runs from both flanks, or even at times to drive into the box and engage an Arsenal defenders 1-v-1.

The image above shows how Watford right-midfielder Sarr picks the ball up from his own half and drives forward, quick enough to exploit the disorganised defence and just at enough pace to allow the right-back to catch up and overlap. Watford amounted an xG of 4.07, a rating which would not have been so high if not for the effectiveness of Watford’s ability to threaten going forward on the break. 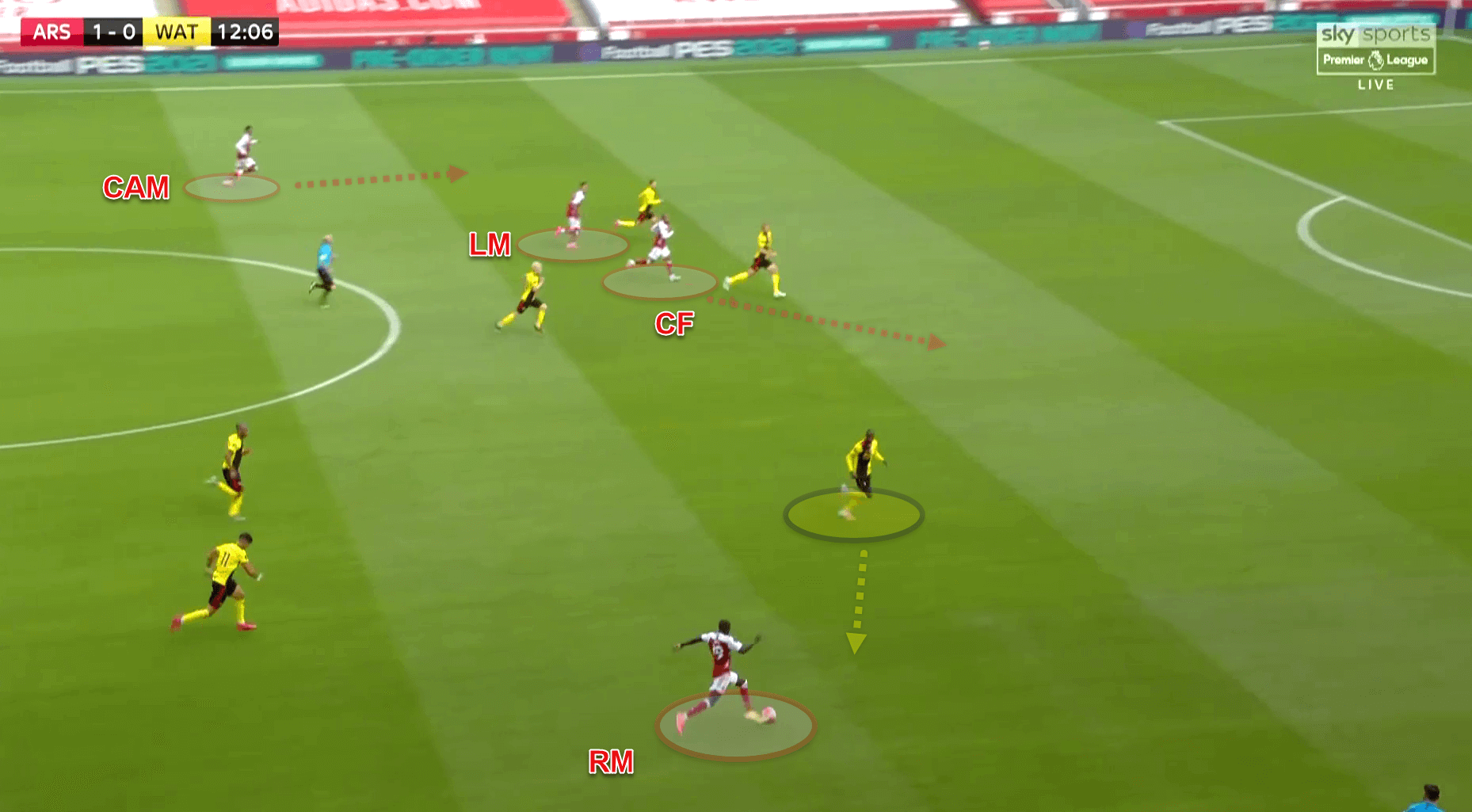 Similarly, we see above Arsenal thought much of the same to unlock the Hornets defence by being quick on the break, in contrast to the conservative Arsenal we are used to seeing when they win back possession. Above, the inverted winger Pepe starts wide, picks the ball up in his own half, and is in the best position to develop a dangerous attack as he carries the ball forward. Notice the supporting runs of his teammates both centrally and on the opposite side flank. As Pepe is a left-footer, he is better able to play a cross-field pass to his teammates.

Hornets hunt from out wide

Watford looked to create their chances from crosses, feeding the 6ft plus forwards Deeney, Welbeck, and Doucouré as they attacked the width of the posts. The men in yellow and blank were able to unlock these crossing opportunities through the good movement of their wide players, including both wingers and full-backs.

Watford conjured 52 attacks, 20 more than the hosts, and of which 13 resulted in goal attempts.
The Hornets were effective from wide positions, particularly when Arsenal switched to a 3-4-3, their numerical superiority helped them create dangerous attacks. Subsequently, this also served to help them win back the lion’s share of possession in the last third of the match.

As we can see by the data above, Watford offered the most threat down Arsenal’s left in terms of volume and probability of scoring.

Above is the crosses conceded by Arsenal on goalkeeper Emiliano Martínez. The black lines represent crosses won by a Watford player in the box. Notice the higher volume of crosses from wide positions, as the physically capable Watford forwards felt confident they could compete and win aerial balls. 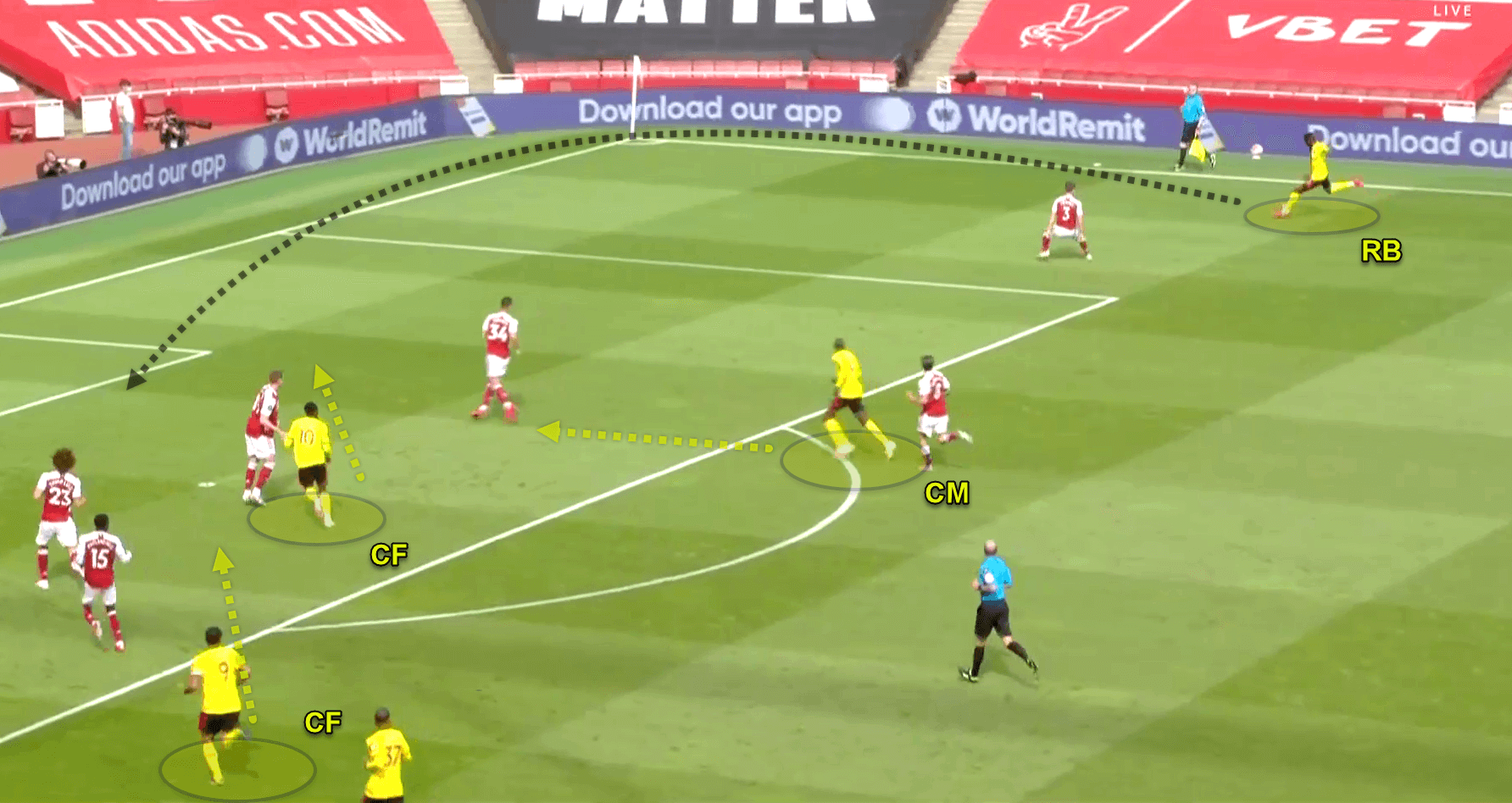 Above we see just one moment when Watford came close to finding the breakthrough from a cross.
The right-back delivers a ball to meet the attacking run of Welbeck at the front post. Followed closely behind is Deeney and Doucouré to compete for either a deep cross or a second ball.

Since Arteta’s appointment, no team in the Premier League has dropped more points from a winning position than Arsenal. Letting a total of 15 points slip ion that time, they are one more point to second-placed West Ham (14). Arsenal fans watching the final 15 minutes might have thought it was going to be another three points their side would let slip. It was on course to happen, but thanks to the ability and sheer will of the underpraised man between the posts for Arsenal, it did not. Martínez was determined to help his side hang on and take all three points.

Winning 100% of his aerial duels and having to compete and defend against the onslaught of Watford crosses and shots in the second half, Martínez is owed a big thanks from his teammates. Keeping his side in the game, especially when the nervous tension of hanging on could be felt, Martínez showed superb composure and confidence to fight on all fronts for his side.

By the above data illustration, we can see by time how Arsenal’s fortunes began to change when Arteta opted for three at the back. From the 60-minute mark, Watford’s xG and possession stats began to climb dramatically, showing bad signs for Arsenal’s defensive unit.

In the final third of the match, this was both a huge psychological and tactical test for the Arsenal players. As Watford’s momentum began to build goalkeeper Martínez was asked to provide what will be one of, if not his best performance of the season. 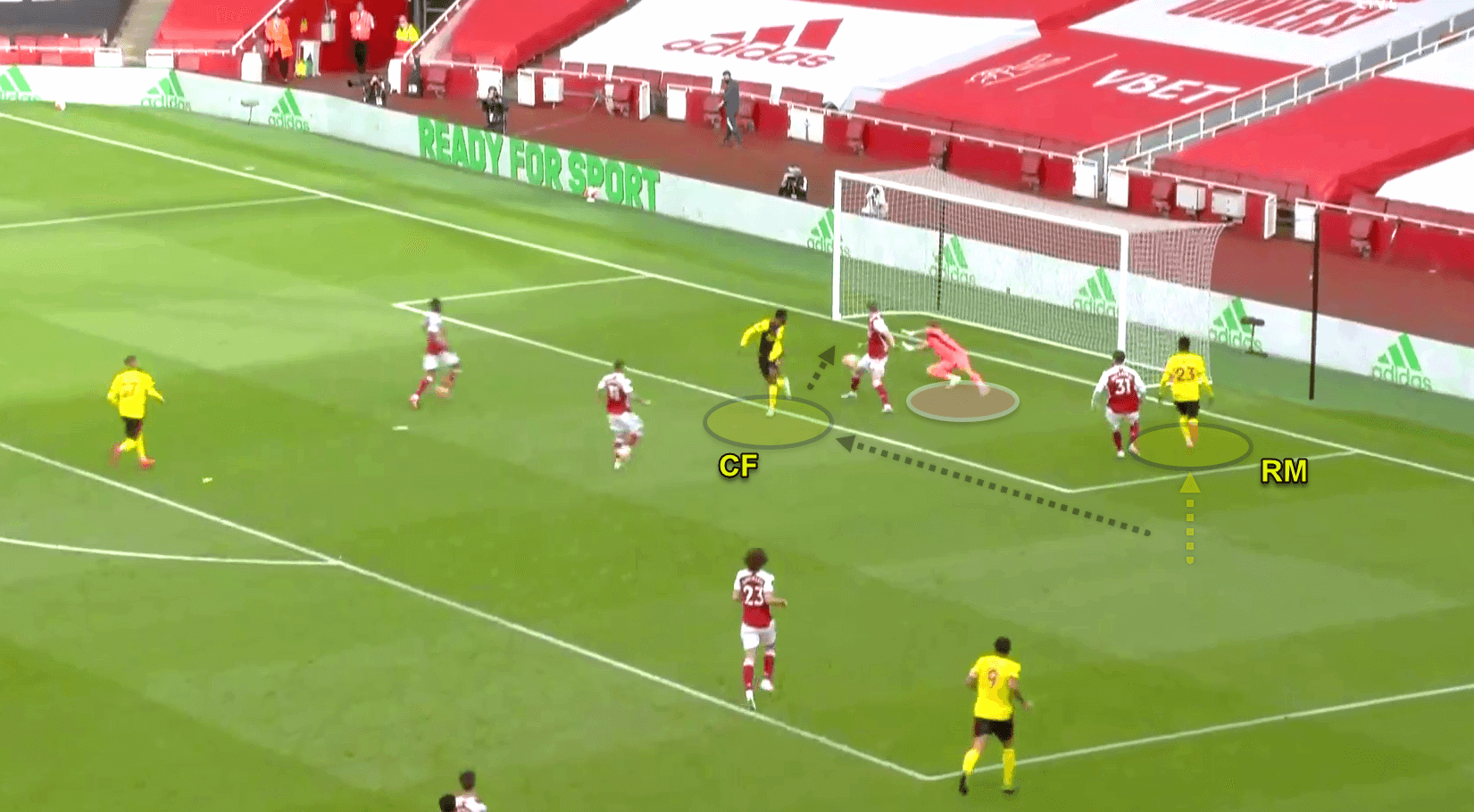 Perhaps the biggest save of the match, above we can see the moment Martínez gets low to stop a low show back-heeled shot destined for the bottom corner. Welbeck offers a chopped back heel on target from the cross provided by Sarr.

Martínez gets low and palms away with one hand to deny the desperate visitors an equaliser in a time when all the momentum seemed to be with the Hornets. Martínez will be owed his mentions in the media and by Arsenal fans as they reflect on key players and key performances of this past season.

The story of this game was not so much about how Arsenal managed to hang on for the win, but how despairing it was for Watford to not claim a deserved three points which were in touching distance. Three points that would have certainly changed the club’s fortunes for the better.

Arsenal looked comfortable at 3-0 up heading into the break only for Deeney to give his side a brace before the start of the second half when he converted from the spot. Sixty-six minutes in and former Gunner Welbeck netted his side’s second goal as their momentum was starting to gather in the final third of the match. The Hornets were unable to find the target a third time and that ultimately spelt disaster for the away side as now they have to rebuild and find their way back from the Championship after are hard-fought five years since their promotion to the Premier League.

Arsenal did enough, however, this game provided many red flags and learning opportunities for Mikel Arteta and his staff heading into next season. This is, of course, not before they round up their season with a trip to Wembley to face an in-form Chelsea for the 2020 FA Cup final next Saturday.

To follow the progress of both of these sides and Arsenal’s upcoming game in the FA Cup be sure to check back in with us at Total Football Analysis.