Derby matches are always fun, but Zlatan Ibrahimović’s comments before LA Galaxy vs LAFC only added to the anticipation. Not only did he claim he was the best player in the MLS, but he also went as far as to say he was levels above the league’s top scorer Carlos Vela. The Swede certainly backed his comments up by scoring a perfect hat-trick in the 3-2 win.

LAFC’s high press led to a penalty in the game’s opening four minutes. Despite this, LA Galaxy’s tactics were too much to overcome. We will discover what those tactics were, and how LA Galaxy won the match, in this tactical analysis.

Unsurprisingly, both Guillermo Barros Schelotto and Bob Bradley selected strong starting elevens. LAFC set up in their tried and trusted 4-3-3, while LA Galaxy maintained a variation of the five-man midfield that we have seen in the past. 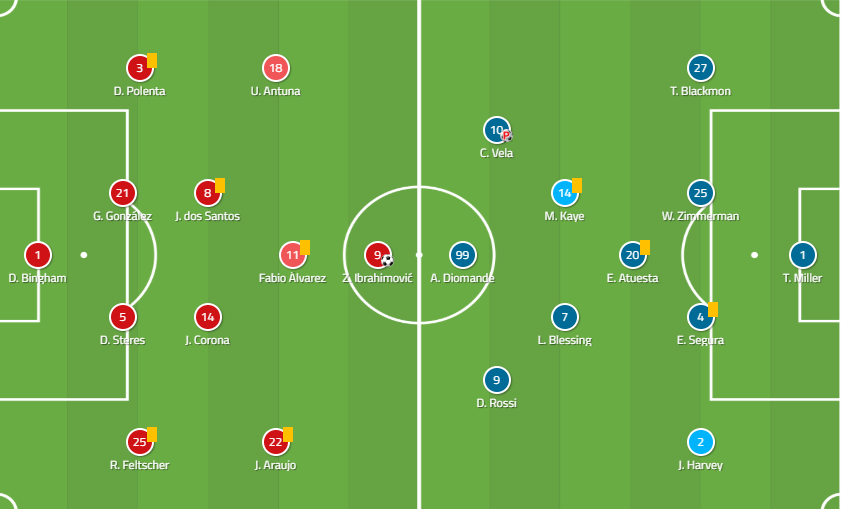 Right off the bat, LAFC utilised their high pressing style to put LA Galaxy under pressure. As this tactic has been discussed in depth in other analysis pieces, we won’t spend too much time on it, however, it is important to mention it for the context of the rest of this article.

The press made it difficult for LA Galaxy, like many other MLS teams so far this season, to play out from the back. When the Galaxy tried to play out the back in the early stages of the game, LAFC capitalised. Mark-Anthony Kaye intercepted a careless pass in the midfield and drove towards the goal. The move eventually earned LAFC a penalty, which Carlos Vela scored to put the guests one goal up.

But as the remainder of this tactical analysis will show, the high press was ineffective for the rest of the match.

Despite conceding early on, LA Galaxy bounced back in expert fashion less than five minutes later. Zlatan Ibrahimović was able to get on the end of a lobbed pass to brilliantly level the scores from a long-range volley.

But despite getting a hat-trick, Ibrahimović’s impact on the game was much more than just goal scoring. His ability to hold up the ball was vital in LA Galaxy’s attacking build-up. As previously mentioned, LAFC notoriously utilises a high pressing system to prevent their opponents from building out of the back. LA Galaxy bypassed this completely with the direct ball to Ibrahimović.

In the heat map below, we can see the Swede’s biggest impact on the game was on the right side of the field. Whenever his team was in possession of the ball, they would look to find him in this area.

At 195cm tall, it is clear to see why Ibrahimović would prefer to occupy his right side of the field. Throughout the match, Ibrahimović won 10 out of the 15 headers he attempted, as we can see in the graphic below. In total, according to WhoScored.com, he won 13 aerial duels throughout the match. The same website says LAFC only won 13 between their whole team. It is unclear if these statistics includes instances where Ibrahimović won the ball with his chest, rather than his head, which he did on multiple occasions.

Ibrahimović’s typical positioning during LA Galaxy’s build-up was about 10-20 yards past the halfway line on the right side of the field. He would typically win the aerial ball while his midfielders were further up the field than him. This gave him the option to either knock the ball backwards or flick it on to one of his teammates in an advanced position.

But what made this tactic so effective was that Ibrahimović was able to retain possession after the direct ball to him. Of Ibrahimović’s 36 passes throughout the match, 12 were with his head. Whether it was a flick on to a teammate, or bringing the ball down to himself with his chest, Ibrahimović rarely gave away possession.

The attack began from LA Galaxy’s goalkeeper, David Bingham. Bingham aimed for Ibrahimović on every single goal kick, hitting him accurately each time. Excluding goal kicks, Bigham passed the ball to Ibrahimović eight times out of his nine long balls. We can see this visualised in the graphic below. 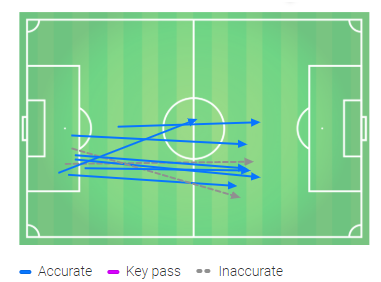 In all three of Ibrahimović’s goals, his physical dominance was important, but it was during the third goal where we saw head coach Guillermo Barros Schelotto’s tactics play out flawlessly. The ball was played directly to Ibrahimović from Bingham. Ibrahimović flicked the ball on to Araujo. Araujo played the ball to Álvarez who laid the ball back into the path of the Swede. Ibrahimović then hit the ball in from long range to seal the match. We can see this passage of play in the images below.

Even when LA Galaxy’s defenders had possession, they were able to beat LAFC’s high press by utilising Zlatan. We can see here, in the 26th minute, LAFC press LA Galaxy’s goalkeeper, David Bingham. Bingham, with limited short options, plays the ball direct to Zlatan.

Ibrahimović wins the aerial duel to knock the ball down into dos Santos’ path. LAFC’s press left a gap in the midfield, as shown with the green box in the image below. Dos Santos is able to dibble into this space and create a 5v5 counter-attack.

It is one thing to beat LAFC’s high press, but you still have to stop them from scoring. With Vela on the right and Rossi on the left, LAFC’s attack is very difficult to stop, especially on the counter. LA Galaxy’s answer to this was simple; bully LAFC.

For 90 minutes, LA Galaxy would fly into tackles, preventing LAFC from gaining any momentum. In total, LA Galaxy attempted 51 tackles, winning 33 of them. They also committed 19 fouls to LAFC’s nine and received five yellow cards.

Whenever Carlos Vela was on the ball on the wing, LA Galaxy would instantly press him to win the ball back. In total, Vela was dispossessed eight times throughout the match, only touching the ball 49 times. We can see the instant pressure put on Vela in the images below.

As passes came into Vela, Polenta would instantly close him down. Not only did he win the ball, but he did so with force. Below we can see Vela thrown to the ground after Polenta takes out both the man and the ball. The referee judged this tackle as fair, and play continued. Less than a minute later, Vela was tackled with force again.

Vela was also let down by a lack of support from his teammates. In the images below we can see Vela in isolation with his teammates providing no support from the middle. This time, Polenta isn’t able to close down Vela as quickly. Kaye, Blessing and Diomande offer little support for Vela.

When Vela receives the pass, Kaye, Blessing and Diomande make little effort to find an alternative position, making it easy for LA Galaxy to mark them. Vela puts his hands up in frustration before passing it backwards.

The combination of these two things prevented LAFC from truly testing LA Galaxy’s defence throughout the match. Diego Rossi had a few chances but failed to test David Bingham. It was in the fourth and 97th minute that LAFC scored their goals. In both these instances, Carlos Vela took up a more central position where he was able to run in behind LA Galaxy’s defensive line and receive a penetrating pass.

LAFC face Atlanta United next week while LA Galaxy take on the Portland Timbers. The league leaders will hope to return to their winning ways against the defending champions. LA Galaxy, on the other hand, look like clear favourites against a team who sit ninth in the MLS Western Conference.