Looking to continue their good form, Los Angeles FC welcomed Real Salt Lake to the Banc of California Stadium. LAFC have started the season well, claiming seven points out of a possible nine. The Black and Gold beat Real Salt Lake in both of their previous regular season meetings by a combined score of 7-1. But in the MLS playoffs, Real Salt Lake eliminated LAFC last season by a 3-2 scoreline.

LAFC managed to make the playoffs in their first season and have started the second season in a similar vein. Real Salt Lake have had more difficulties. RSL came into this match with four points out of nine but have struggled for goals. They have only scored two goals this season, both by Albert Rusnak who would miss this game as he was on international duty for Slovakia. With their leading, and only, goalscorer missing this match, RSL wondered where their goals would come from.

Playing during an international break is always a challenge for MLS teams, and this match tested the squad depth for both sides. Each made several changes and gave debuts to several young players.

It looked like the visitors were going to hold out for the point until the 92nd minute, when centre-back Walker Zimmerman lashed a long-range strike into the top corner. With this goal, LAFC continued their positive start to the season with a 2-1 victory. 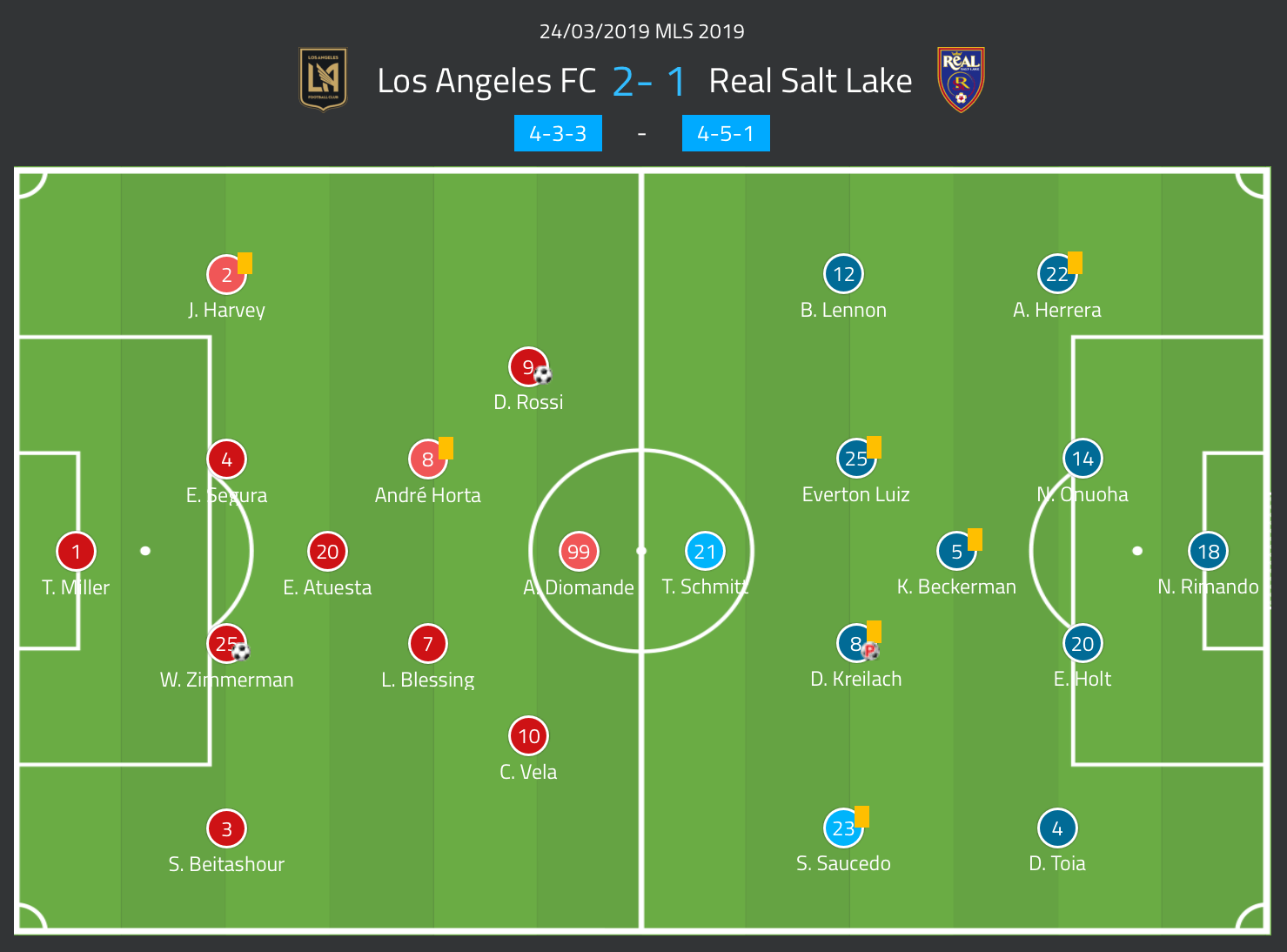 Former Swansea City manager Bob Bradley has built a quality side in Los Angeles. He made three changes to the side that drew 2-2 with NYCFC last week at Yankee Stadium. Adama Diomande got his first start of the season, playing as the striker in place of Christian Ramirez, who was with the United States Men’s National Team. Mark-Anthony Kaye was called up by the Canadian National Team, so Andre Horta made his first appearance of the season in midfield. The final change saw Steven Beitashour getting the start at right-back, with Danilo Silva dropped to the bench.

Entering his third season with Real Salt Lake, Mike Petke made four changes to the side that had suffered a 5-0 defeat away to DC United the previous weekend. After receiving red cards, both Marcelo Silva and Jefferson Savario missed this match with suspensions. With these bans, the inexperienced Donald Toia and Erik Holt came into the back line.

Corey Baird struggled against DC United, and was left out of this squad, replaced up front with Tate Schmitt. Also missing was Albert Rusnak, who was called up by Slovakia and scored in their Euro qualifier against Hungary. Trying to fill Rusnak’s important role was Sebastian Saucedo.

In this tactical analysis we will break down how Real Salt Lake stifled Los Angeles FC’s build-up. We will also look at RSL’s limited attacks, and finally we will check out how LAFC attacked.

Real Salt Lake look to stifle the Black and Gold

One of the key areas in any match is the midfield, and this match was no different. An important component of LAFC’s possession is Eduard Atuesta, who plays as a deep-lying playmaker. He often drops between the two centre-backs when they split out wide during the build-up. He moves well to make himself an available passing option, and his vision allows LAFC to move the ball up the pitch quickly.

Real Salt Lake played with a very deep defensive block, and they were man-oriented in the midfield. They knew the importance of Atuesta to LAFC’s build-up, and set up accordingly. The LAFC back line wasn’t put under pressure by RSL, with striker Schmitt instead focused on trying to prevent passes into Atuesta.

As we can see in the image below, Real Salt Lake are sitting in a deep block of a 4-5-1. They aren’t applying any pressure on the LAFC centre-backs, allowing them time on the ball, but they are working hard to prevent passes into LAFC’s midfield. With the visitors’ marking, LAFC struggled early to progress the ball up the pitch.

The congestion in the middle of the pitch meant that LAFC were often reduced to building up in the wide areas. Real Salt Lake funneled the build up into the flanks, and they were able to block off access into the midfield. LAFC were frequently reduced to playing high balls to try and get behind the visiting full-backs, but they had little success.

As the match wore on, Andre Horta would also drop deep in the build-up. This was successful as Everton Luiz was less diligent with his marking responsibilities, and LAFC’s build-up improved after this change. At the same time, Bob Bradley gave instructions to his full-backs to position themselves higher up the pitch. We can see in the image below that this had a positive effect of an additional presence in the wide area.

Los Angeles FC were having more success progressing up the pitch, but they still struggled to create chances. Real Salt Lake’s release was Brooks Lennon on the right wing. He stayed higher up the pitch than the rest of RSL, as they stayed in their deep block. After the LAFC full-backs were positioned higher up the pitch, Lennon was able to get into the space behind Jordan Harvey. In the graphic below, you can see that Lennon was more active in advanced areas than Saucedo on the opposite flank.

This movement allowed RSL to present more of an attacking threat, and they were able to score against the run of play in the 35th minute. Saucedo was brought down in the penalty area by Latif Blessing. The penalty was converted by Damir Kreilach to give the away side a 1-0 lead. This was the last time that RSL would present a serious attacking threat, as they spent the rest of the match defending.

How LAFC tried to dominate

The home side’s starting striker, Christian Ramirez, was called up for the USMNT and unavailable. In his place, former Hull City striker Adama Diomande got the start. He’s a physical player, with good movement and he did well occupying the central defenders.

During the few transitions available for LAFC, he would move into the channels and try to open space for LAFC’s gifted wide forwards to operate in. As you can see in the graphic below, Diomande was used to receive long passes in the channel where he could combine with the onrushing wingers.

Where LAFC are most dangerous is through their wingers, with former Arsenal player Carlos Vela on the right side and 20-year-old Uruguayan Diego Rossi on the left. Diomande operates well with his back to goal, and is effective playing short passes to the wingers as they make diagonal runs into the area.

As you can see from the image below, Diomande is occupying the centre-backs and ready to receive the ball. Rossi is drifting between the lines on the left side, while Vela is looking to make the dangerous run in behind the centre-backs.

Another important aspect of LAFC’s attack was their willingness to counter-press Real Salt Lake. This contrasted with how deep RSL sat throughout the match, which you can see in the graphic below.

Latif Blessing provided the energy in LAFC’s midfield. He played in a box-to-box role, and he started on the right side of the midfield trio. This was a key position throughout the match, as his runs would open space for Carlos Vela. RSL recognised how important Carlos Vela is to LAFC’s attack, and they tried to double-mark him. Steven Beitashour tried overlapping runs, but he wasn’t able to do this consistently to disrupt RSL’s marking scheme.

Blessing had more success. As we can see in the images below, he makes a forward run into the half-space taking RSL defenders with him. This in turn allows space for Vela to dribble inside to open passing lanes into dangerous areas.

Real Salt Lake came into this match with a defensive plan. They had key absences due to suspensions and international call-ups, so they were focused on defending and scoring on a counter-attack. This plan worked, as they took the lead in the 35th minute through a penalty. At this point, they lost all attacking impetus and settled into a deep defensive block. LAFC equalized before half-time, but RSL continued to defend trying to hold out for the point.

Real Salt Lake’s defending got more desperate after the 84th minute when Justin Portillo got sent off with a red card, RSL’s third in their last two matches. It appeared their strategy would be successful until the 92nd minute, when Walker Zimmerman scored an excellent long-range goal to give Los Angeles FC all three points.

The visitor’s strategy worked well, as LAFC struggled in the build-up throughout the match. However, after RSL took the lead they became too passive and allowed LAFC too much possession. By sitting so deep, RSL no longer caused LAFC the problems in build-up, and eventually LAFC were able to find a way through.