Barcelona marked the end of their La Liga campaign at the Camp Nou just the way they started it: with a victory. But it was a rather frail 2:0 game for the Catalans against Getafe in a gloomy atmosphere of their fortress instead of a captivating finale in front of their celebrating fans. This tactical analysis will analyse how Barcelona recuperated after a heavy loss in the Champions League to see the Camp Nou off with a win. 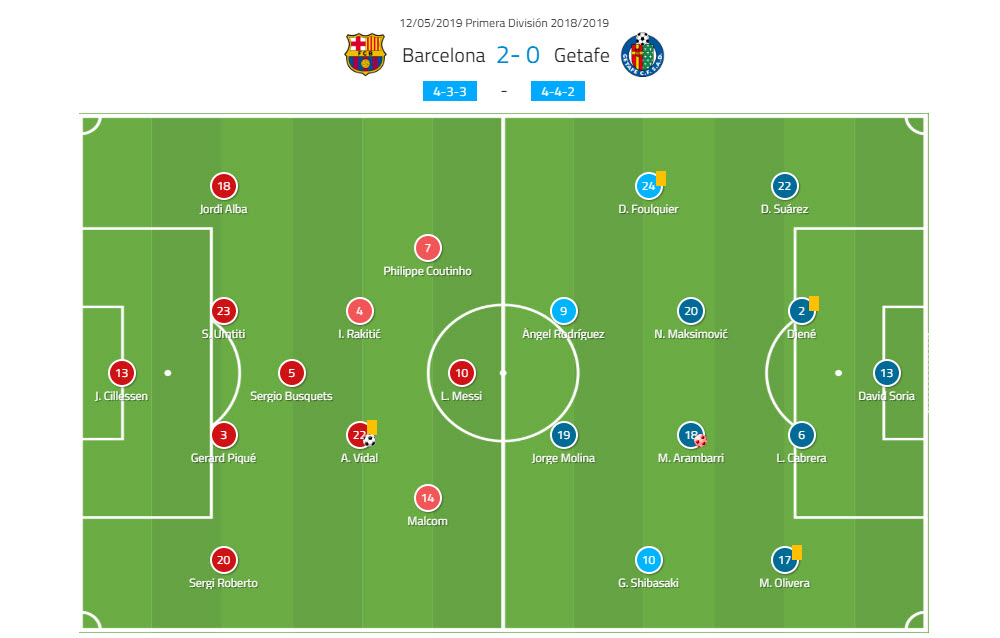 It was quite surprising to see Ernesto Valverde’s team selection considering all the events that transpired recently and even more importantly, now that La Liga is long done and dusted. The Ant decided to field his strongest XI with the exception of the injured Luis Suárez, Ousmane Dembélé and Arthur Melo.

In their places came Malcom, Arturo Vidal and Philippe Coutinho to form a formidable lineup for a mostly meaningless domestic game. The other changes were the exclusion of Clement Lenglet and Marc-André ter Stegen, both of whom dropped to the bench. In their places came Samuel Umtiti and Jasper Cillessen. The rest of the squad was unchanged from the game against Liverpool at Anfield.

The team operated in a 4-3-3 system throughout the match with no apparent changes bar the personnel.

The visitors also decided to field a pretty strong lineup but as much was expected from Getafe since they are still hoping for a top-four finish in La Liga. This defeat definitely made things more difficult for them but they will get their second chance in the final fixture of the campaign next weekend.

With basically everything on the line, Bordalás decided not to tamper with a squad that clearly functions well. He did, however, make some slight adjustments to face Barcelona. The backline, as well as the man between the sticks, remained unchanged but the suspension of Bruno González meant that the coach had to shuffle the deck a bit.

In his place came Leandro Cabrera as Mathias Olivera Miramontes assumed the left-back position as opposed to playing the left wide midfielder role like in the previous game. Gaku Shibasaki filled his void in the middle of the park and the suspension to Jaime Mata also forced Bordalás’ hand so he fielded Angel Rodriguez as Jorge Molina’s partner in crime.

Getafe were deployed in a 4-4-2 formation and saw no changes to it until the end of the game.

Even though the scoreline would suggest a comfortable win for Barcelona, Getafe were actually the more convincing team on the pitch for the first 45 minutes of the game. The Catalans really needed some time to get back on their feet and the crowd’s whistles were certainly not helping their cause.

The insecurities and the nervousness in their legs were visible from the start as Barcelona actually managed to accumulate far too many individual mistakes, just like they did against Liverpool, which lead to the opposition generating good chances.

Getafe were ready to make good use of numerous Barcelona’s lost balls, namely 107 on the night, but unfortunately for them, none yielded them a palpable result in the back of the net. Of all of their 11 shots on goal, none were on target, which was the main problem of the away team.

One of the biggest surprises was the poor form of Sergio Busquets, who was directly responsible for two of those shots and 15 losses in total. The Octopus of Badia did not have a good time on his final La Liga day at the Camp Nou this season.

But that also speaks volumes of Getafe’s gameplan for the night. They decided to defend in a compact mid-block with two banks of four players guarding the entrance to the final third. Their intention was never to truly contest the ball, as can be seen in the possession stats below.

Pouncing on Barcelona’s mistakes and utilising their counterattacking prowess was the way to go for Bordalás’ troops, which was kind of a surprise given that they have only scored one goal through counters this season and mostly relied on open play attacks. Granted, it’s difficult to outplay Barcelona in their own game but Getafe never looked like trying to do that, in the first place.

They were more than happy to give Barcelona their freedom in the build-up from the first third of the pitch but aimed to shut down all the passing channels leading into the midfield. They knew that charging the backline would likely result in Barcelona somehow slithering through their ranks but by maintaining their distance, they ensured to limit them to fruitless possession.

Still, there were times when Getafe felt like they could get the ball in dangerous areas so they decided to press really high up the pitch. Barcelona, however, had a clear gameplan for those instances and were able to avoid the press and continue the attack with a simple system in place.

The basic principle they utilised was to make the pitch as wide as possible, therefore stretching the opposition’s pressing squad as much as possible. In the example below, the full-backs drop slightly deeper than usual to open a passing channel for the centre-backs and, usually, the lavolpiana midfielder between them.

Notice how in the scenario where Getafe send multiple men forward, Barcelona respond by dropping both midfielders deeper to assist in the build-up. Rakitić, however, is just a decoy that drags one of the markers away and clears a path towards Busquets who can carry the ball forward into free space.

Arturo Vidal joins the party last as he is most commonly the one positioned the furthest up the pitch with a more attacking mindset. Now, as can be seen below, he takes the ball from Busquets and after inviting enough pressure on one side of the pitch, Barcelona suddenly free their right flank for progression into the final third and ultimately sending the ball to Lionel Messi.

This, to an extent, did let Barcelona take control of the pitch but they were still missing any real threat to their attack. This was fixed after the half-time whistle and a bit of a personnel reshuffle.

Barcelona take the reigns back and see the game out

Carles Aleñá, Abel Ruiz and Nélson Semedo entered the fray not long after the start of the final 45 minutes in Catalunya. It’s safe to say that, whether it was due to their presence or something else, Barcelona looked much better from those moments onward.

Aleñá offered new mobility to the hosts with his constant movement in-between the lines and especially with his ability to carry the ball forward and progress the play. The young La Masia prodigy offered more options to the Blaugrana and a constant attacking threat. Both Arturo Vidal and Aleñá were mostly positioned higher up the pitch in a more attacking mindset.

As can be seen above in the young midfielder’s pass-map, he was everywhere on the pitch, completing 96% of all his passes and also 85% of all his actions started in the game. Once the midfield was more energised and able to shuffle and move more, Barcelona suddenly became more versatile in their approach and Getafe couldn’t follow.

The key was in the constant reshuffling of the deck – movement that begets movement and space manipulation. With constant swapping of positions, Barcelona made sure to keep Getafe’s block on the move and as disjointed as possible. In the first half, Vidal and Messi would do their usual swap of positions to let the Argentine drop deeper to create and the Chilean would assume the vacant spot up front, keeping the defenders on their toes.

In the second half, however, fresh blood in Ruiz and Aleñá also meant more running in the Catalans’ ranks, which is not really a standard sight nowadays. The young Catalan’s effect could mostly be seen in his attempts to make things easier for Busquets, therefore allowing Barcelona much more ease in their build-up.

Apart from being the teams’ attacking outlet, Aleñá would also drop deeper when needed to create space for Busquets or just offer a passing lane, as can be seen below. He drops from the opposition’s final third to receive the pass and carry the ball.

Recycling possession at this point was not a tall task but it’s not really that which has to be highlighted here. After he moves the ball onto the flanks and to Jordi Alba, his movement opens up more options for his full-back to exploit and leaves Sergio Busquets completely free of any markers.

That way, Barcelona could easily retain possession since they always had reliable and safe options to pass to, and their build-up would not suffer because of it. Creating space within that midfield was crucial when attacking as it gave them the freedom to orchestrate to their will.

The same space and movement manipulation were seen throughout the game and were ultimately the thing that gave Barcelona most of their chances as multiple channels for through balls would open and the compact shape of Getafe would be breached.

The Catalans knew where their strengths lie and they used it to the fullest to snatch the victory which did not mean much in the grand scheme of things but maybe served the purpose of getting their heads straight.

The gloomy ambience could be felt in the air of the Camp Nou as the fans greeted their heroes with whistles and boos instead of cheers. The guard of honour Getafe prepared for the La Liga champions was also accompanied by the same negative energy in a half-empty colosseum of football.

Barcelona might have won the game but they sure did not feel like celebrating. Changes are bound to happen in the Catalan capital but first, they have another final and another trophy to play for.