FC Seoul vs Jeonbuk Motors was supposed to be a hard-fought battle as it was the battle between the champions and the 3rd placed of last season in K-League 1. Instead, it looked more of a one-sided affair as can be observed by the xG of both the teams. Jeonbuk registered an xG of 2.56 while Seoul had a mere 0.6 xG.

Let’s dive deeper into the tactical analysis and observe the tactics of both the managers and the unique method of Jeonbuk build-up.

Chol Yong-Soo shuffled between 5-3-2 and 5-3-1-1 this season, which is basically a similar version of one another. In this match, he preferred two strikers upfront, Yeong-Uk Jo and Adriano, who were brought in for this game. In the midfield there was only one change, Alibaev came in for Seung-Kyu Han, and the other two in the midfield, Se-Jong Ju and Chan-Hee Han, kept their places. The defensive line and the goalkeeper were the same from the last match. 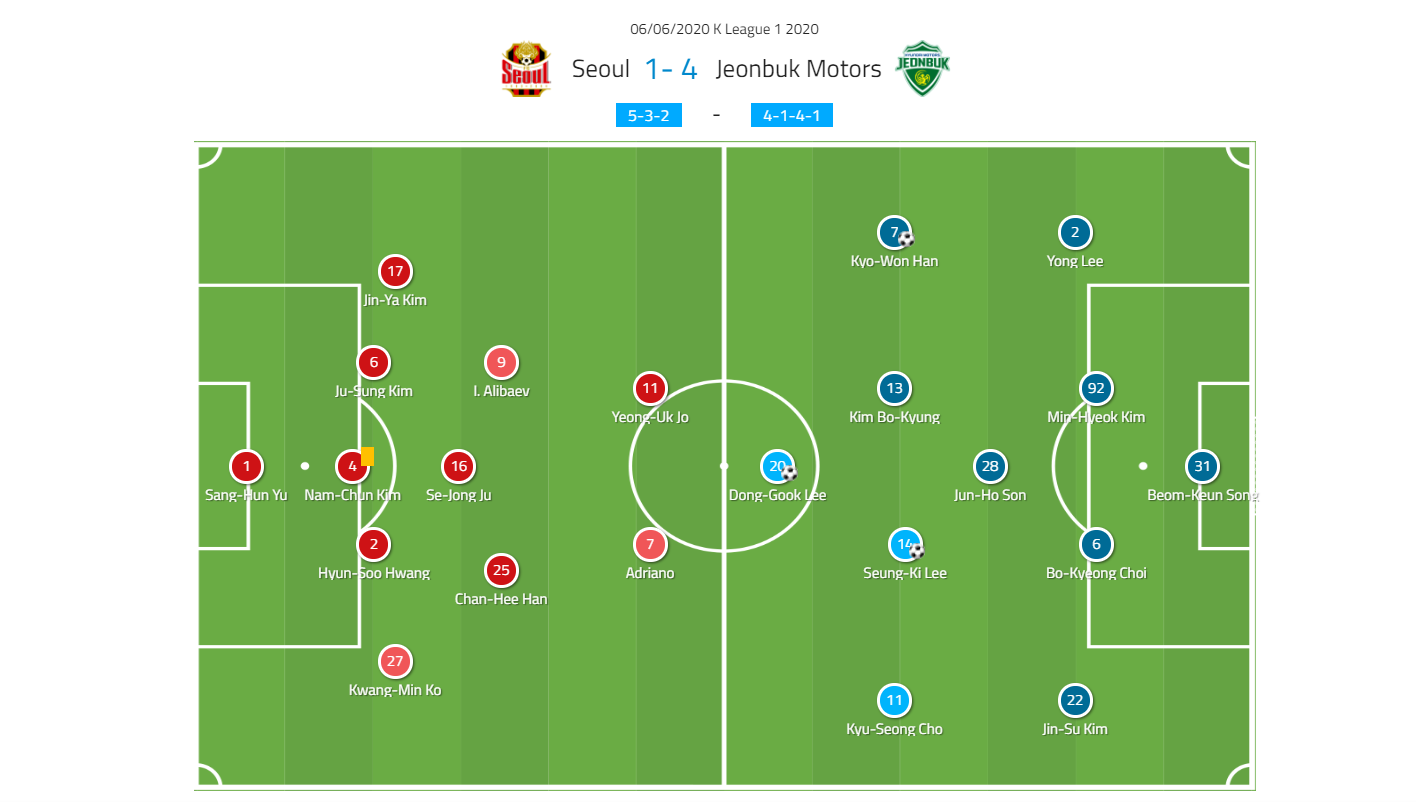 José Morais started with his preferred 4-1-4-1. The Portuguese too did not tinker much with his defensive lineup but was forced to bring in Min-Hyeok Kim for Jung-Ho Hong, who was out of the game due to a red card accumulated in the last match. All the foreigners who started the game against Gangwon sat on the bench. Dong-Gook Lee started as a striker in place of Lars Veldwijk, Kyu-Seong Cho replaced Murilo Henrique in the left-wing, Kyo-Won Han started in place of Takahiro Kunimoto in the right-wing. The other players kept their places in the team.

Seoul out of possession

Seoul did not go for high aggressive pressing which could be easily understood by their 11.62 PPDA (Passes allowed per defensive actions). The Seoul Dragons instead went with midblock and ‘pendulum pressing’. Pendulum pressing means the forwards won’t go for aggressive pressing rather they would be blocking the passing channel to the opponent’s pivot. One player would be behind the pivot to mark him closely and another would be moving towards the opponent’s centre-back who has the ball in his feet. The player moving away from the pivot generally provides a cover-shadow and prevents the passing lane to the pivot. 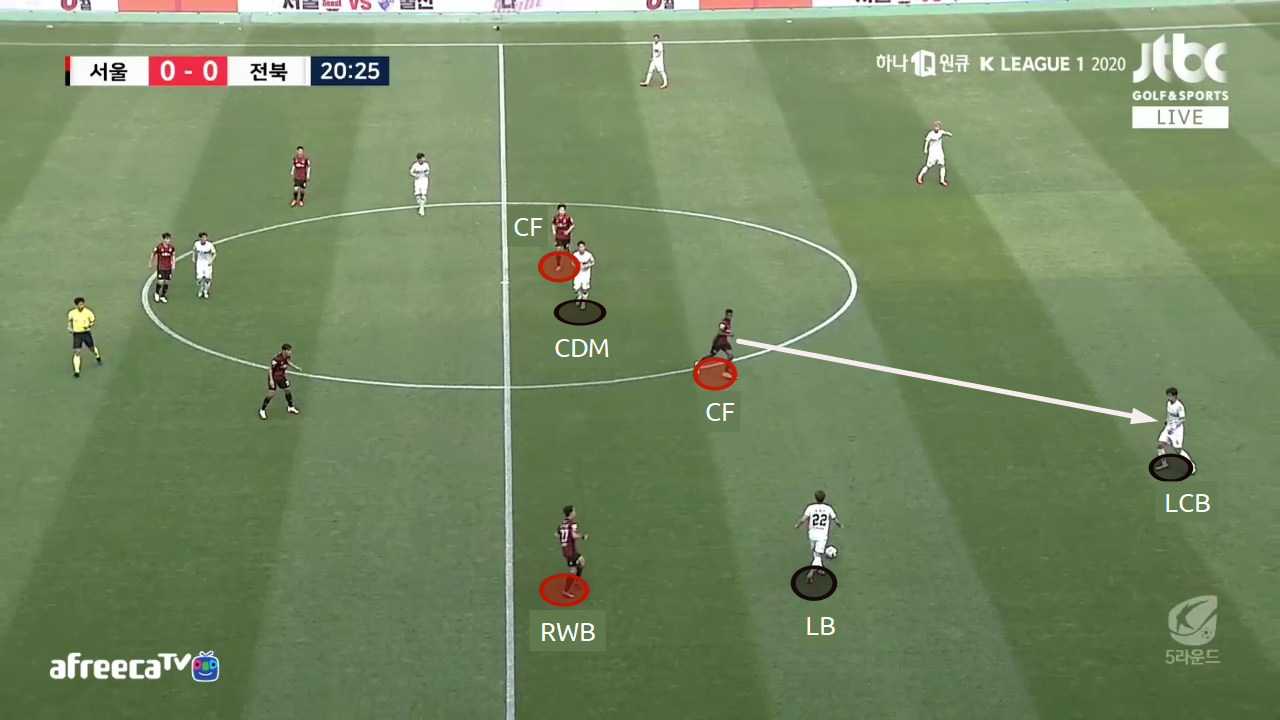 Seoul focussed on preventing the central channels and wanted to force the Jeonbuk attack wide to the flanks, when that happened one of the wing-backs would push forward to mark the Jeonbuk full-back (as shown in the image above) or sometimes the ball-near midfielder, depending upon who can press the full-back faster.

Jeonbuk in possession – the diamond

The Warriors tried to dismantle the Seoul midblock through various ways and the most common way was through creating a diamond in the middle third of the flanks (mostly), and a 5th man who would be ahead of the diamond mostly in the final third to carry forward the attack. If the Warriors aren’t able to carry their attack by creating a diamond, they would quickly switch the channel which would lead to a 2 vs 2 situation or something similar, which we would discuss later in this section.

First, let’s dive deeper into how the pivot would break the shackles of pendulum pressing of Seoul forwards and thus leading to the creation of a diamond in the flanks.

The pivot Jun-Ho Son would often drop deeper to form a three-man backline during the build-up, thus moving out of the pendulum pressing as well as pushing the centre-backs wider to the flanks to maintain the width and stretch the opponents. 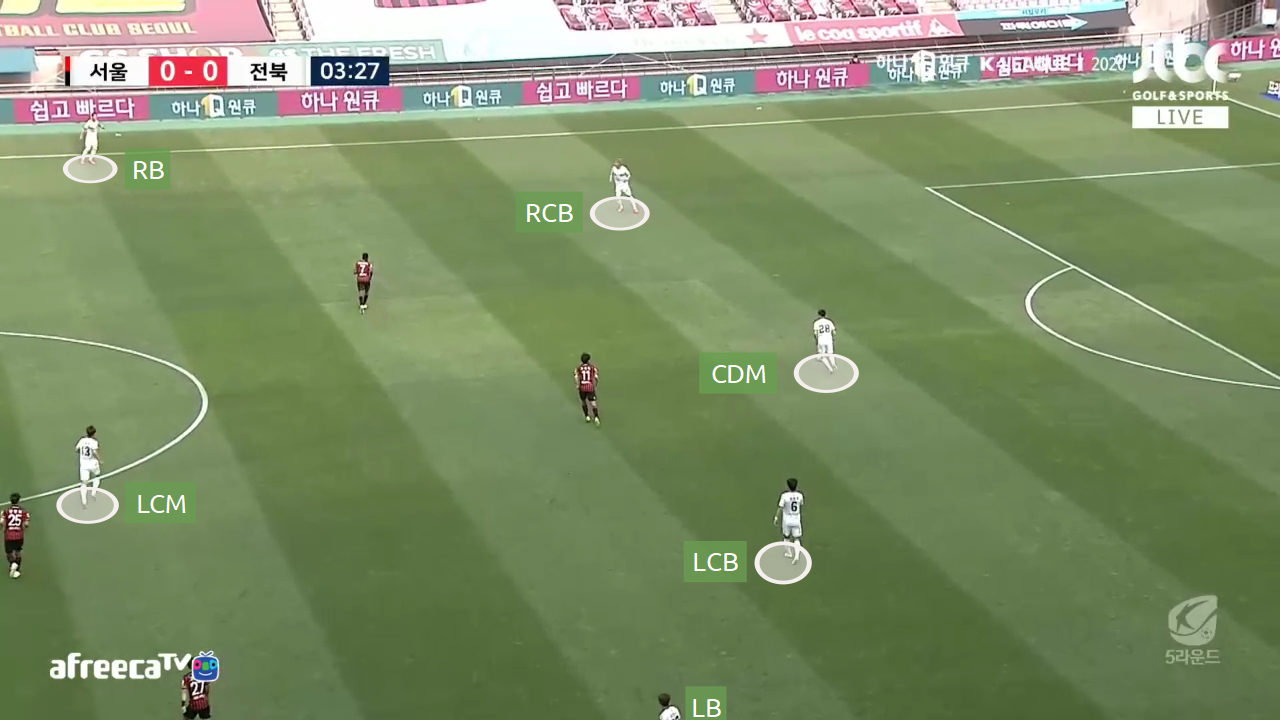 However, most of the time, he would drop to create a three-man backline but in a wider position to push the RB further upward, similar to what Serie A side Atalanta do. This also helps to form a diamond but with greater conviction as Son is a better passer and it helps them to carry the attack forward. 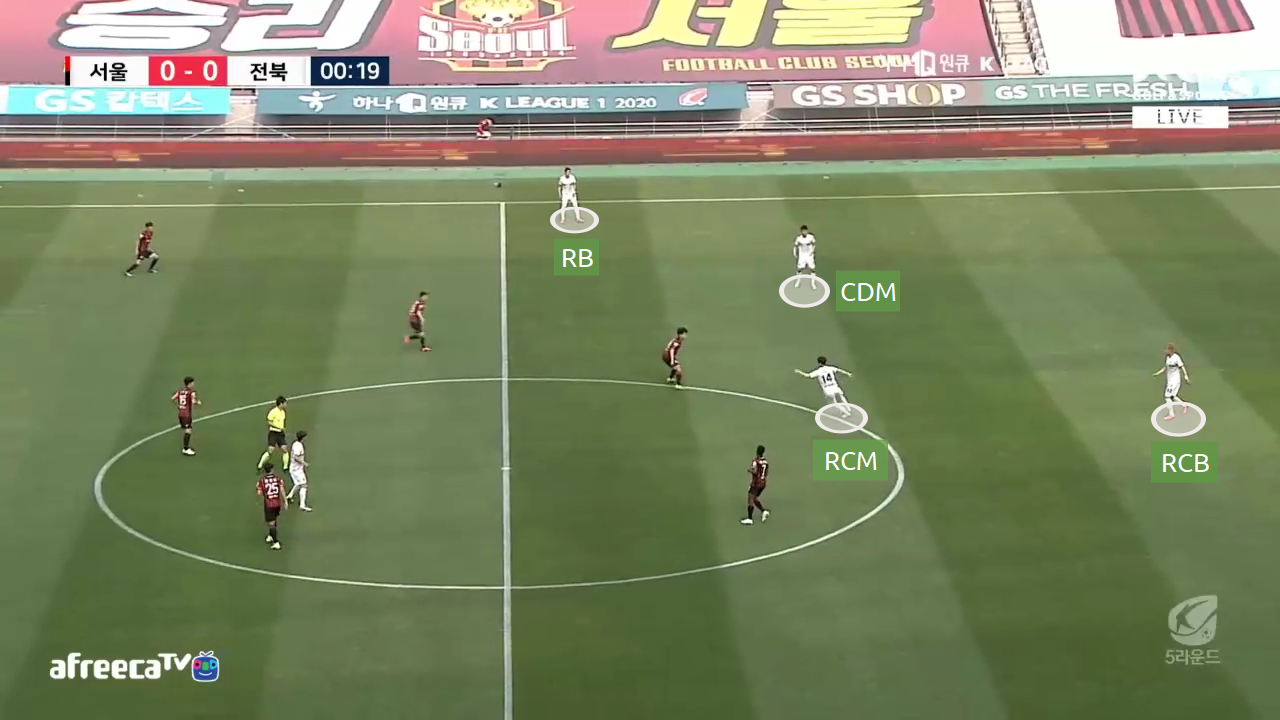 In both the images above, it can be seen that when Son drops to form a three-man backline a midfielder drops in between the first line and the second line of defence or just occupies his place.

Now, let’s focus on the way Jeonbuk form diamond to build-up their attack. 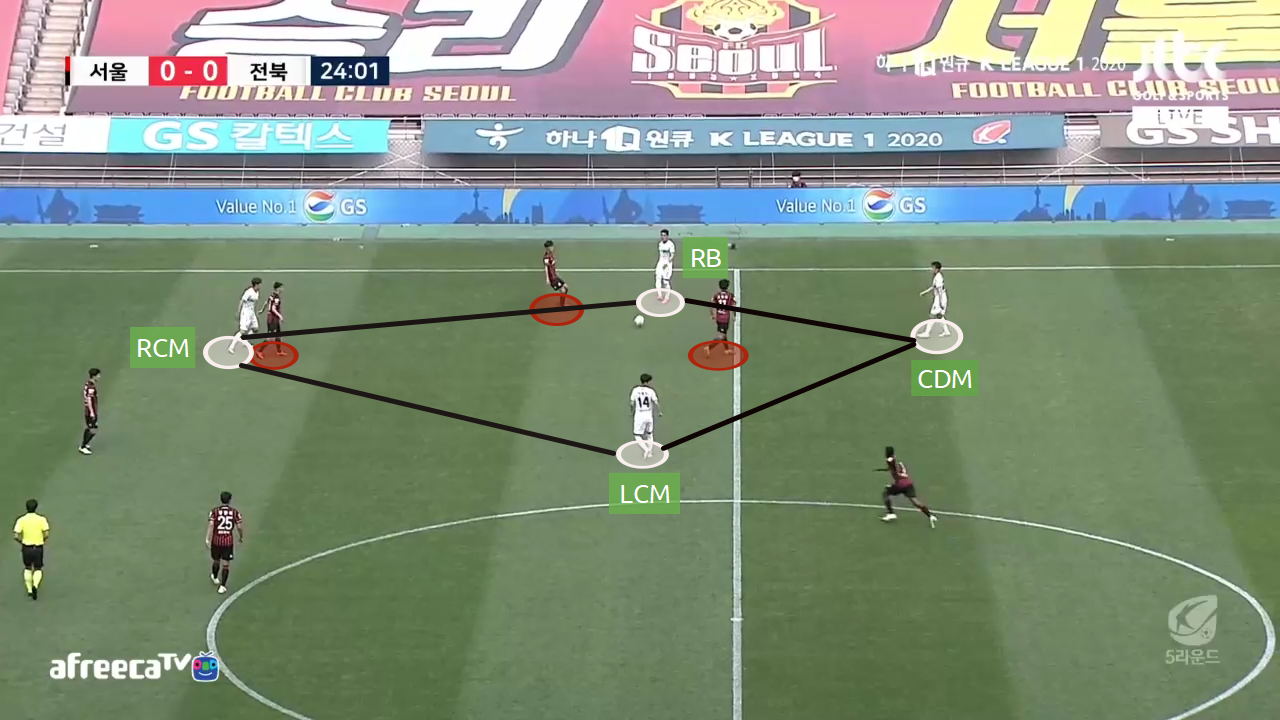 As can be in the image above, the right centre midfielder, former Cardiff City player, Kim-Bo Kyung, is at the top of the diamond. The LCM, Seung-Ki Lee is parallel to the right-back, Yong Lee, who is furthest in the flanks, and Son is the anchor. The Jeonbuk diamond created an overload in the flanks and thus helped in carrying out the attack. During this situation, the winger generally becomes the 5th man who stays ahead of the diamond, thus opening up a passing lane.

If the situation requires even the striker drops down to form a diamond with the midfielders. 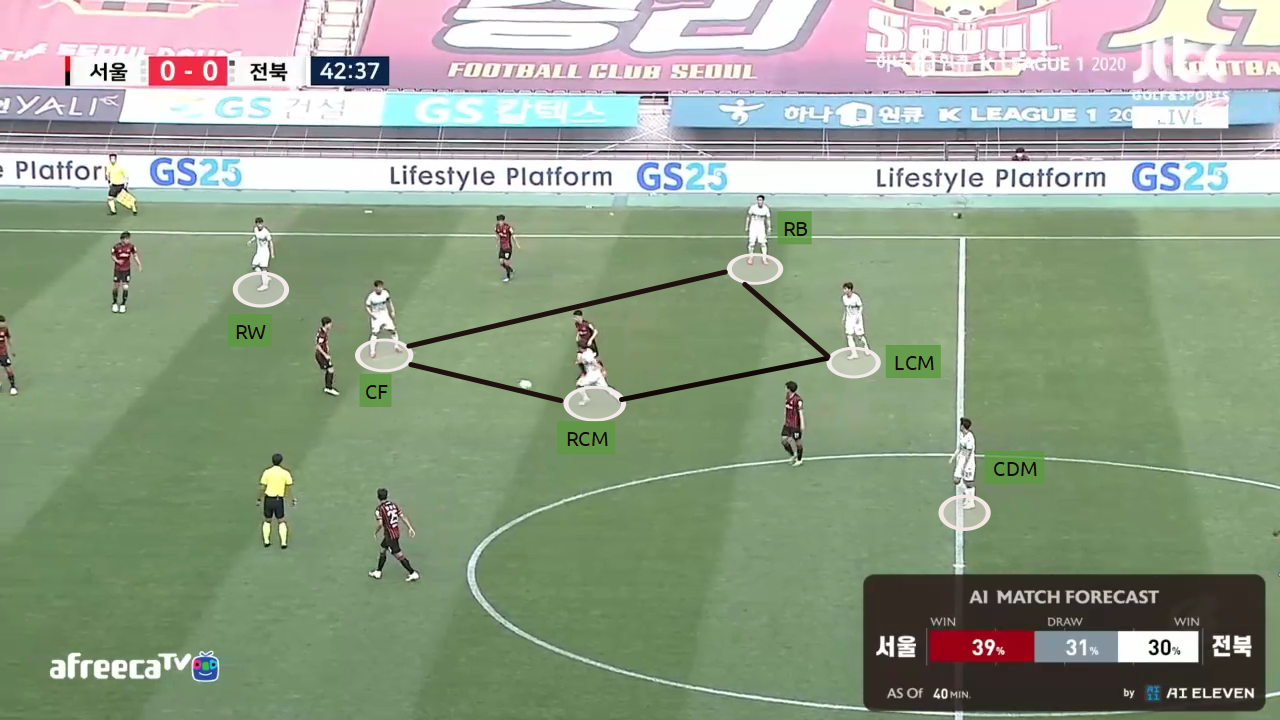 In this situation, one of the Seoul forwards kept a track on the centre defensive midfielder, Son. Thus, the striker, Lee, drops down to be the top of the diamond and helps in the build-up and in this case, the left centre midfielder, Seung Ki-Lee, becomes the anchor. It is to be noted that the winger always maintains his position in the flanks and acts as the 5th man.

When the Warriors is unable to break the opposition defence by creating a diamond, they would quickly switch the channel to carry on with the attack. 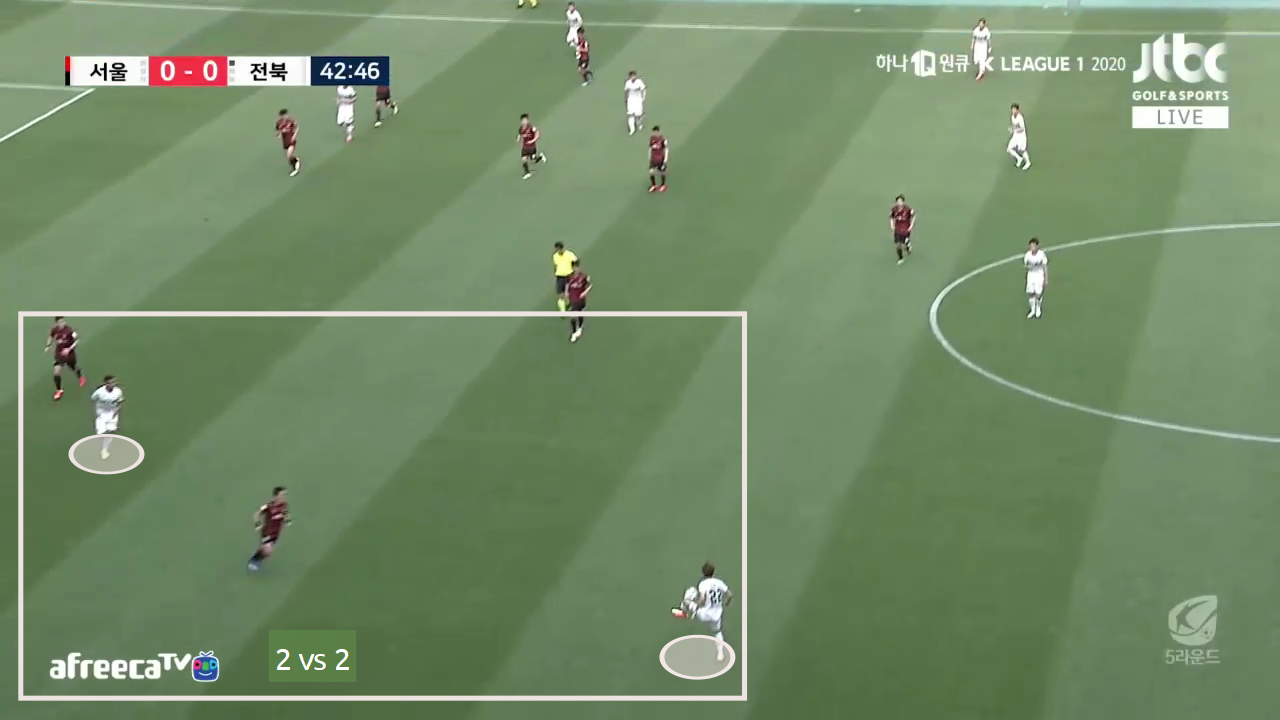 In this scenario, Jeonbuk created a diamond in the right flank and quickly switched the channel to the left-flank to create a 2 vs 2 situation. This was possible since the Seoul players did not press the ball carrier aggressively, thus giving him enormous time and space to switch the channel.

The other common way Jeonbuk tried to break down Seoul’s defence was through switching the channel and playing long balls. 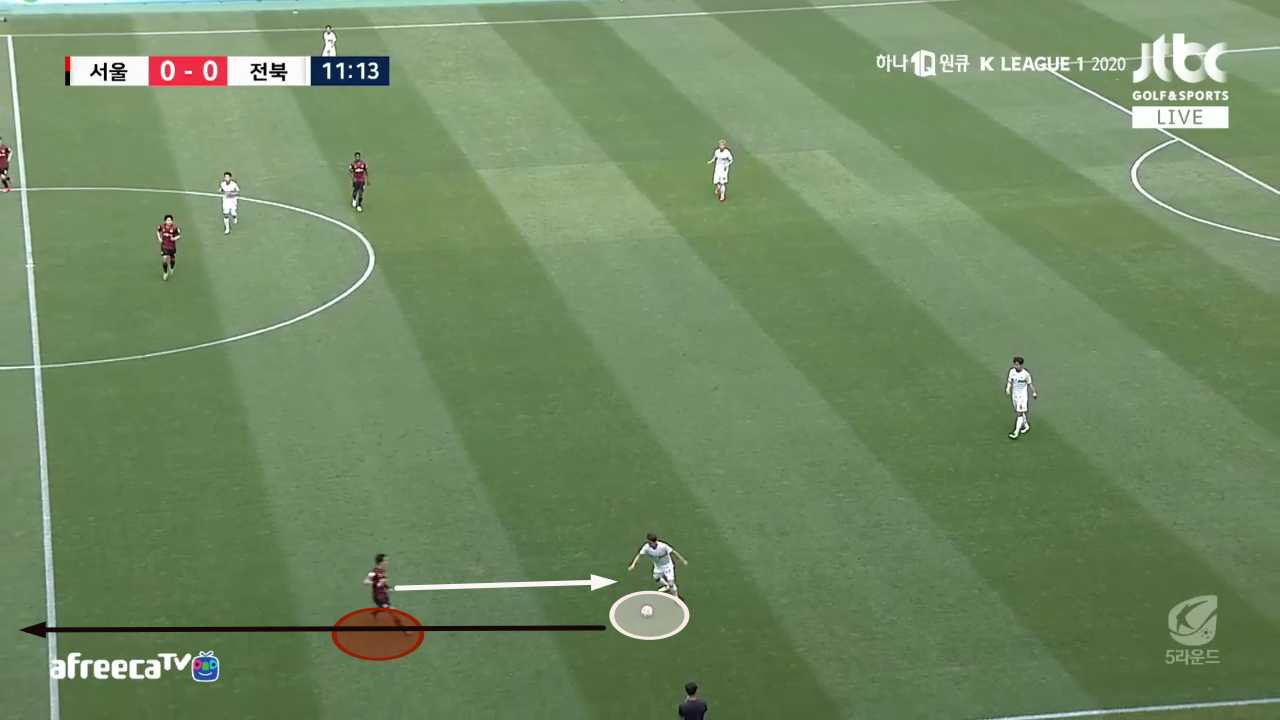 When the ball was switched to Jeonbuk’s left, the right centre midfielder of Seoul had to cover a lot of area to press the Warriors left-back. So, the right wing-back stepped up to press the left-back, which was touched upon earlier in the previous section. 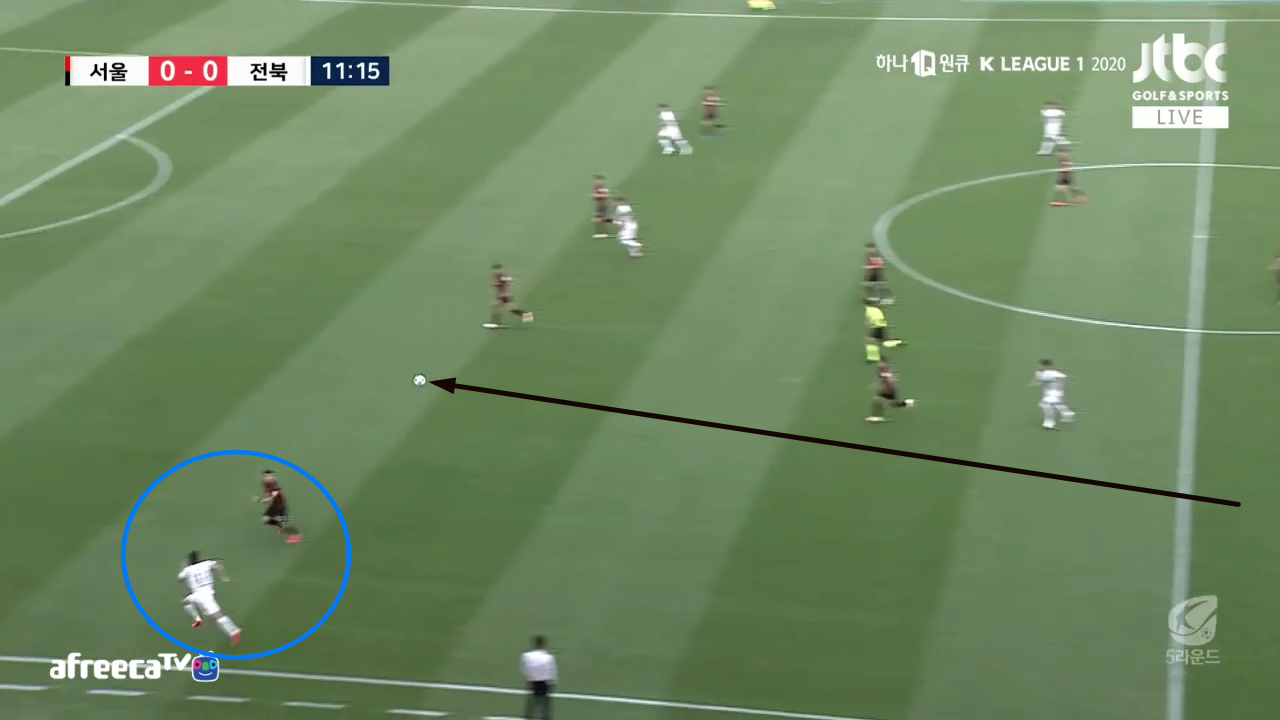 When the wing-back pushed-up, the Jeonbuk left-back would play a long ball to the left-winger, to create a one-on-one situation with the right centre-back of Seoul, which the starting winger could not take advantage of. However, when Henrique was brought on, he troubled the Seoul right centre-back to an extent.

Jeonbuk out of possession

Seoul mostly played long balls from the back. However, when Seoul would build-up from the back, which was very rare, Jeonbuk would defend with a midblock. The striker, Lee, would cover the passing lane to the midfield and once the ball is played from one centre-back to another, he would try to shadow cover the centre-back who had just passed the ball. 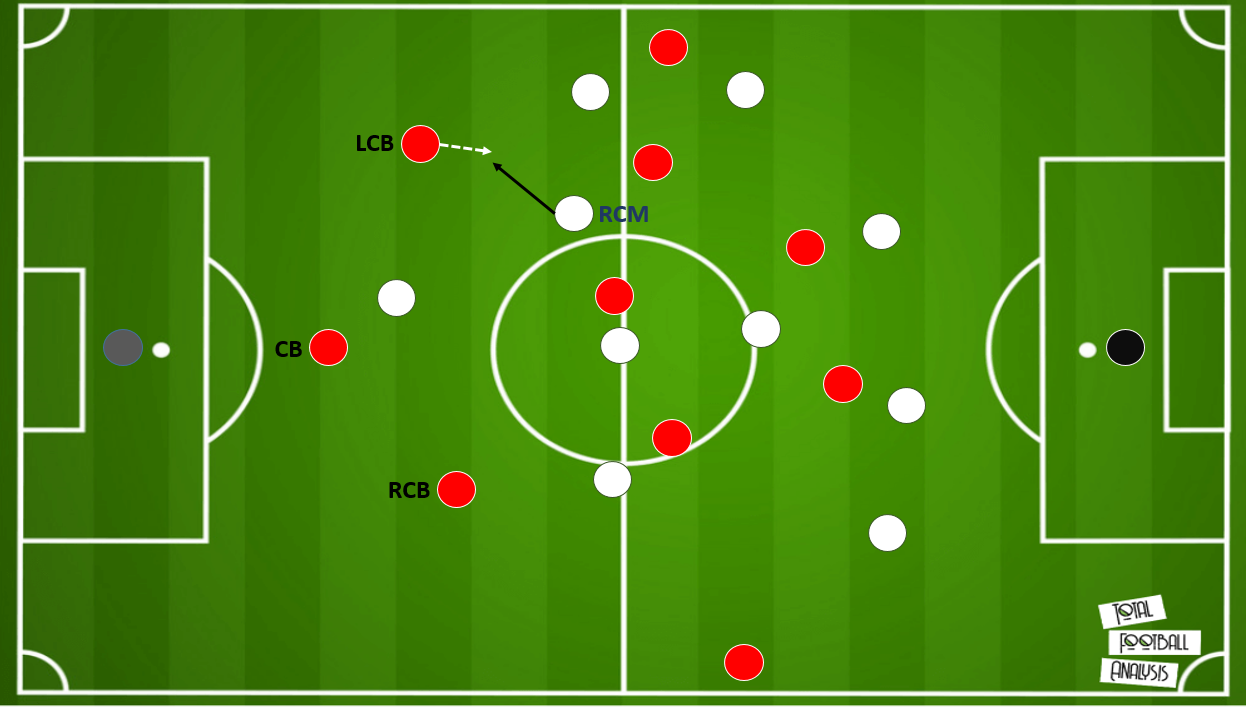 Seoul sometimes penetrated the first and second line of defence when they rarely build out from the back. As stated in the previous section, when a centre-back carried the ball forward, a ball-near midfielder would move up to press the ball-carrier. Sometimes it left a space behind. 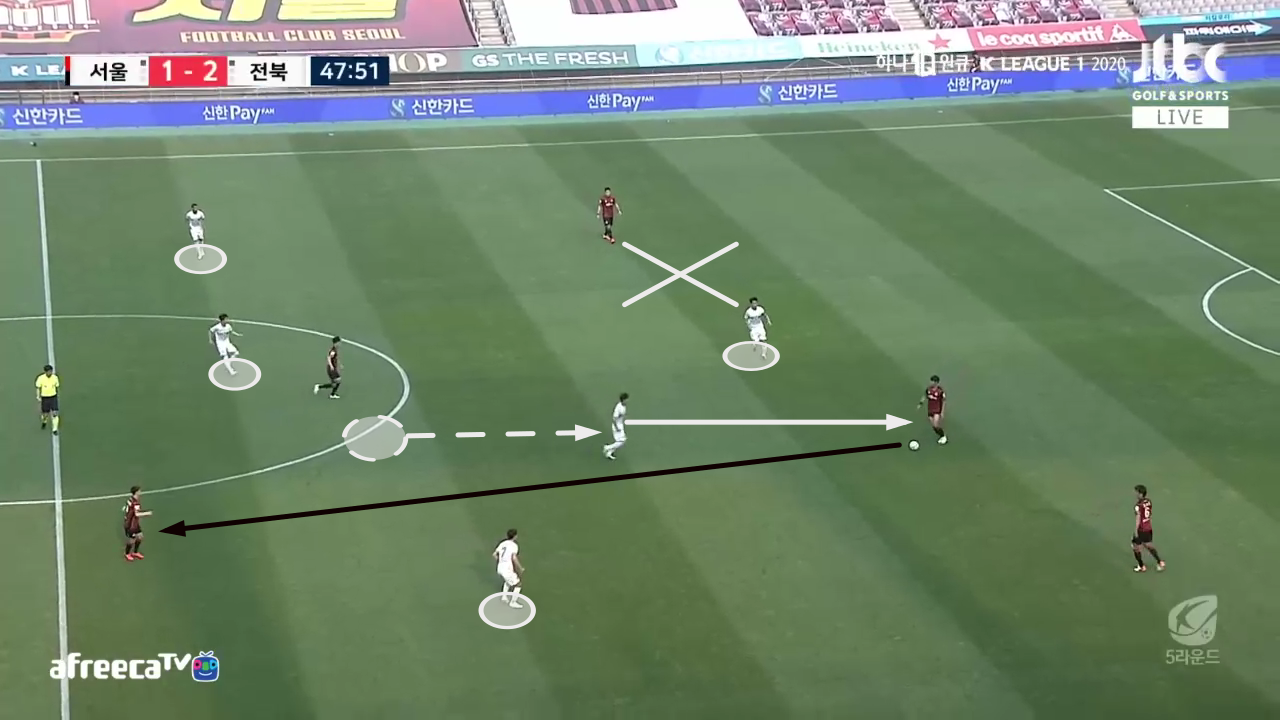 The above image vividly depicts the mistake of Jeonbuk’s press. When the central centre-back carried the ball forward, the right centre midfielder, Kim, moved up to press the ball-carrier. The problem to it was the body orientation while pressing, he moved inward trying to shadow cover the centre midfielder but it also left an easy passing lane to the left centre midfielder.

Apart from the rare build-up from the back, Seoul tried to hit Jeonbuk though counter-attack, especially in the first half. When they were trailing in the second half, they had a bit more of the ball and showed versatility in their attack. 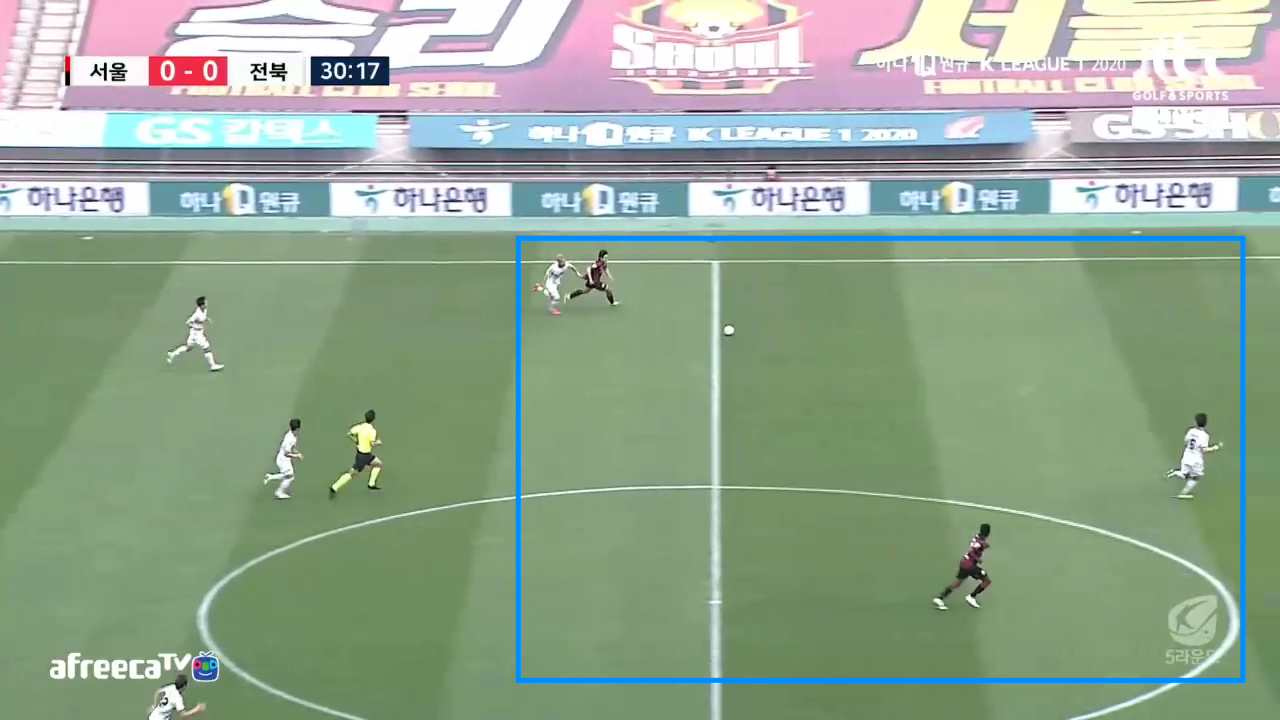 In this scenario, Jeonbuk lost the ball. A Seoul player passed the ball to the forward, Yeong-Uk Jo, in the middle third of their own half. Min-Hyeok Kim stayed glued to the striker and tried to pressure him to win the ball back but Jo was clever and easily beat the defender. It led to a 2 vs 2 situation for the Seoul Dragons with Kim trying to catch up on Jo. Unfortunately, a poor final pass did not affect the scoreboard.

The versatility of their attack was mainly seen in the flanks where the wide centre-backs overlapped in the final third and tried to create an overload in the flanks, which Premier League side Sheffield United is famous for. 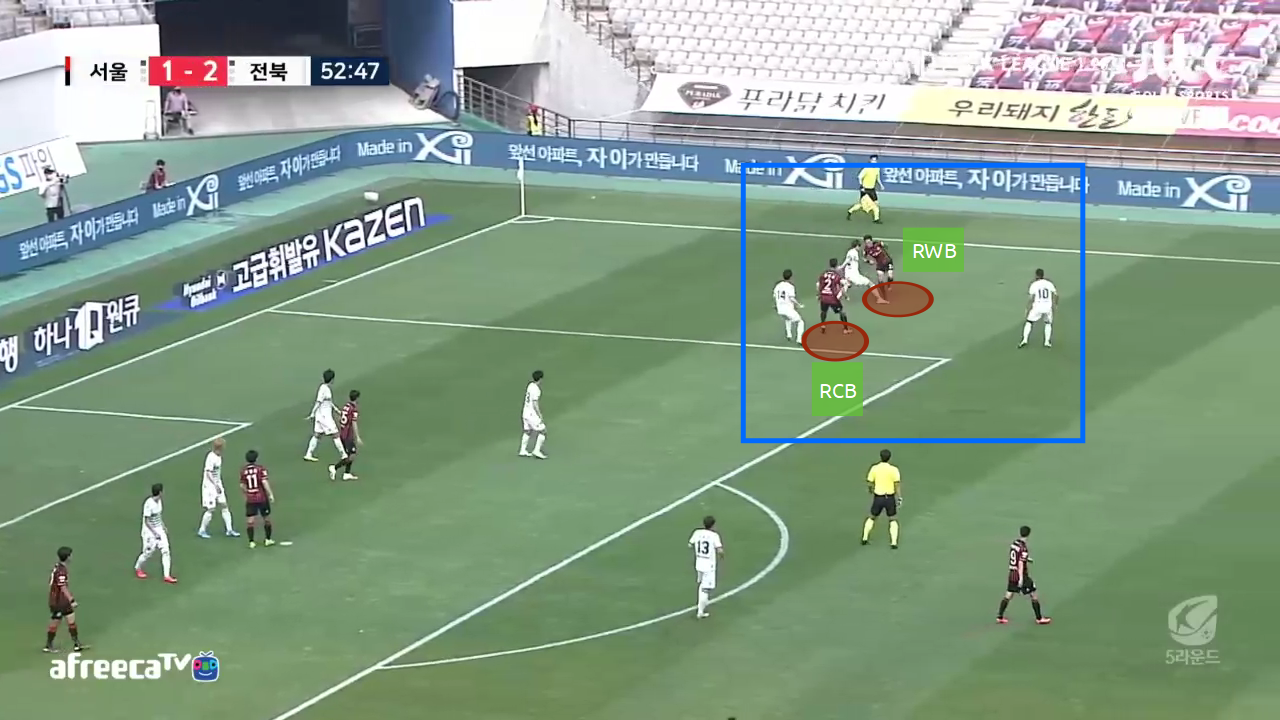 As in the image above, the right centre midfielder (#25) moved to the box from the flanks to have extra players in the box, expecting the wide centre-back and the right wing-back to put in a cross. However, Jeonbuk put in extra numbers in the flank to neutralise the attack. The left-winger, left-back, and the left centre midfielder created an overload on the Seoul players and won the ball back.

Seoul had their moments but it was mostly Jeonbuk who dominated the game as can be observed in this analysis. Jeonbuk have a unique way to build-up their attack. Converging both the attacking centre midfielders to very close space and on the same half of the vertical channels is something unique. Seoul had no answer to the ‘diamond’ build-up on the flanks as Choi Yong-Soo commented after the match, “After going a goal down our overall balance collapsed. The game was lost on both flanks.”

The few chances Seoul received through counter-attacks were wasted due to poor finishing and poor final passes.

Seoul’s back to back home losses pushed them down to the seventh spot and Jeonbuk’s prolific win helped them to reclaim the top spot after game-week 5.