Tunisia met Australia in the second fixture of World Cup 2022 following a solid performance from the Tunisians against Denmark which earned them a valuable draw ahead of the other games. However, Tunisia failed to keep their positive run going and lost 0-1 to Australia while failing to score for the second World Cup match in a row. This loss complicates Tunisia’s qualification mission even further and makes them obliged to win against France in the third match and wait for a gift from the Denmark vs Australia match in order to qualify alongside France. Otherwise, the team will most likely exit the tournament early mainly due to missing the opportunity of beating Australia since they had the ability to do so.

On the other side, Australia succeeded in performing in a way that resembled Tunisia’s performance against Denmark. In other words, Australia were excellent in duels and were always aggressive on the ball, which helped them keep possession – especially during the first-half and avoid Tunisia’s attacks. At the same time, the team succeeded in converting one the few chances they had into a crucial goal, despite having fewer goalscoring opportunities than Tunisia. This intelligent exploitation of the team’s strengths and awareness of their weaknesses enabled Australia to win three important points that gave them an advantage over both Denmark and Tunisia. A draw against Denmark will therefore be enough for the team to qualify alongside France, if Tunisia don’t create a shock against Les Bleus. If they do, Australia will have to win their third match against Denmark in order to pass to the knockout phase.

In this tactical analysis, we will be analysing Tunisia’s defensive and attacking mistakes and exploring Australia’s tactics that helped them win this fundamental match. The analysis will also include some analysis of the most remarkable actions, with the help of data and statistics.

Tunisia started the match using the 3-4-3 formation with Aymen Dahmen as a goalkeeper, Serie A’s Dylan Bronn, Yassine Meriah and Montassar Talbi in defence, Bundesliga’s Ellyes Skhiri and Aïssa Laïdouni as central midfielders, Ali Abdi and Mohamed Dräger as wing-backs, Youssef Msakni and Naïm Sliti on both wings while Issam Jebali was the team’s striker. Head coach Jalal Qaderi preferred to use the same formation and line-up of the first match except changing Anis Ben Slimane for Naïm Sliti who is known for his dangerous and quick penetrations and dribbling skills.

And when things were not going in Tunisia’s favour during the second half, Qaderi didn’t hesitate to switch to the 4-2-3-1 formation in order to have more players inside the final third and use more attacking players. Although these changes were a little bit late, subbing on Wahbi Khazri and Salernitana’s Wajdi Kechrida were efficient substitutions as both players contributed very well to Tunisia’s attacks and created some danger during the last minutes of the match. But at the same time, using a player like Taha Yassine Khenissi in this match wasn’t a successful choice to make especially when knowing that the team includes one of the most talented Tunisian strikers at the moment, Seifeddine Jaziri. The latter could have helped the team a lot offensively if he subbed the tired Issam Jebali. Jaziri is considered one of the best strikers in the Egyptian League and despite this fact, he didn’t play a single minute in this World Cup until now. 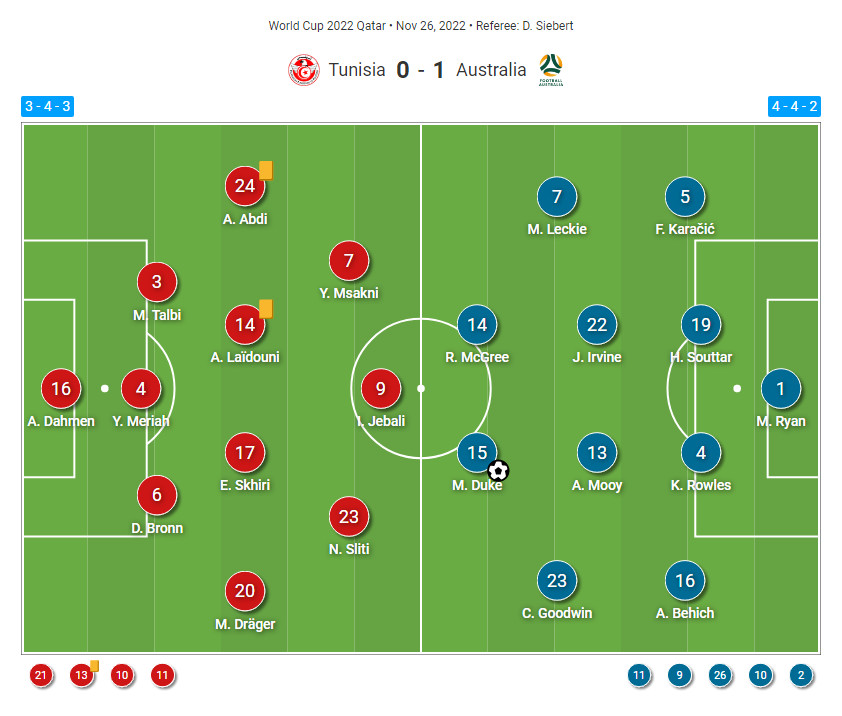 Following their draw against Denmark, Tunisia were hoping to get a positive result against Australia knowing that Denmark is more powerful than Australia, at least on paper. However, Tunisia didn’t perform in a way that would help them in winning against Australia. On the contrary, the team conceded too much and were not good enough in duels and in terms of dynamism and determination to score and disturb Australia in their own half. Tunisia missed the whole first half and were only able to attack and press high on Australia during the last part of the second half when it was too late.

Moreover, Tunisia’s shooting accuracy and finishing issues continued during this match as the team shot only four times on target out of 13 shots while Australia shot seven times and only two of these shots were on target. Tunisia could have exploited this lack of Australian attacks in a more determined way in order to oblige them to commit mistakes in their own half. But in fact, the Tunisian players were a little bit too relaxed mentally and were not really aware of the difficulty of their mission. Therefore, they approached the match with a wrong attitude that cost them a goal and that obliged them to keep trying to reach a draw for the rest of the match, without success.

In terms of attacking issues, the team created some great goalscoring opportunities but the finish was always lacking, and that’s a huge problem for Tunisia. In the following example, Dräger passed to Jebali on the right wing who crossed the ball perfectly towards Msakni who was inside the box, but the latter didn’t deal with the ball in the best of ways and lacked the intelligence and the movement of real strikers in order to escape from the marker and put himself in the best position to shoot on goal. Msakni didn’t move well before the ball reaches him and therefore he was still marked when he received the ball. As a result, he wasn’t able to shoot it accurately as he was disturbed by his marker. In addition, this picture clearly shows that Msakni was lacking in clarity between controlling the ball first or shooting it directly. And from his body orientation, it was clear that he was not intending to go for a first-time shot but made that decision at the last second, which explains why his shoot was not on goal. 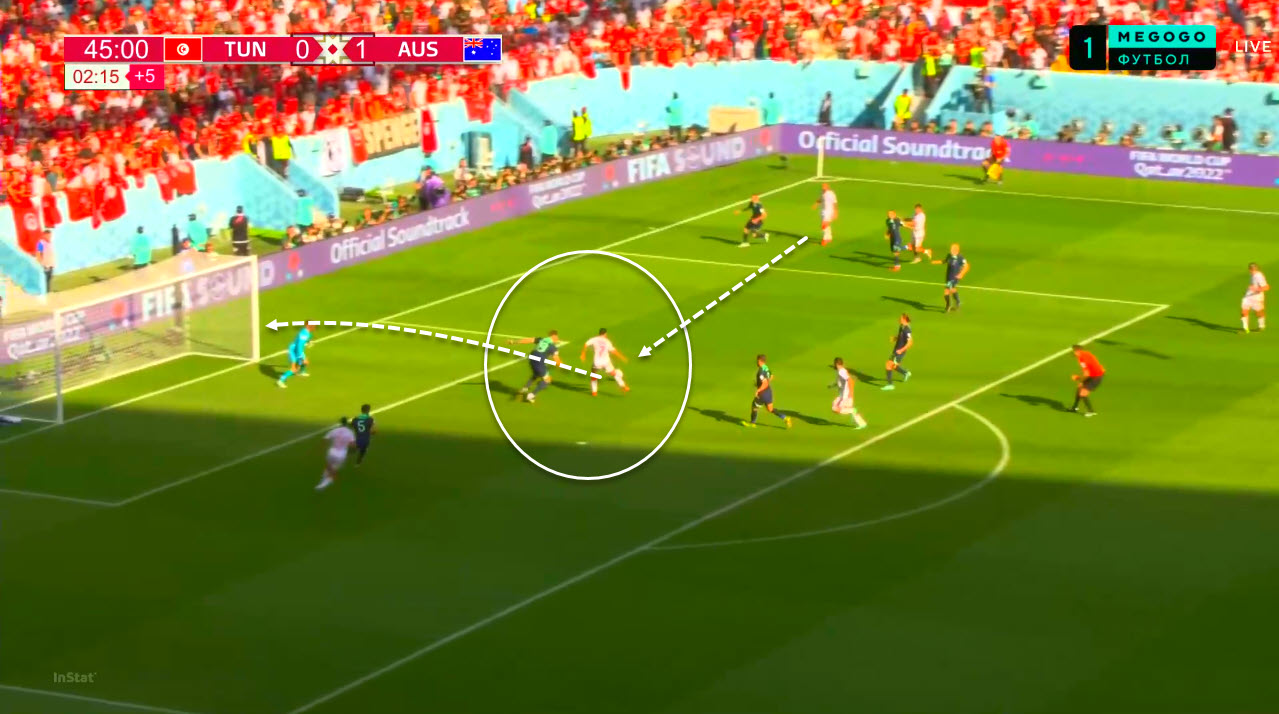 Apart from that goalscoring opportunity, Tunisia missed another big goalscoring chance during the last minutes of the first half when Jebali was able to win the duel with his marker, pass the ball to Msakni who gave it directly to Dräger, creating numerical superiority and giving him the chance to score. However, the latter failed to score due to Souttar’s sliding tackle. It is true that this was not an easy chance to score, yet, Dräger could have dealt with this situation in a more intelligent way in order to score. 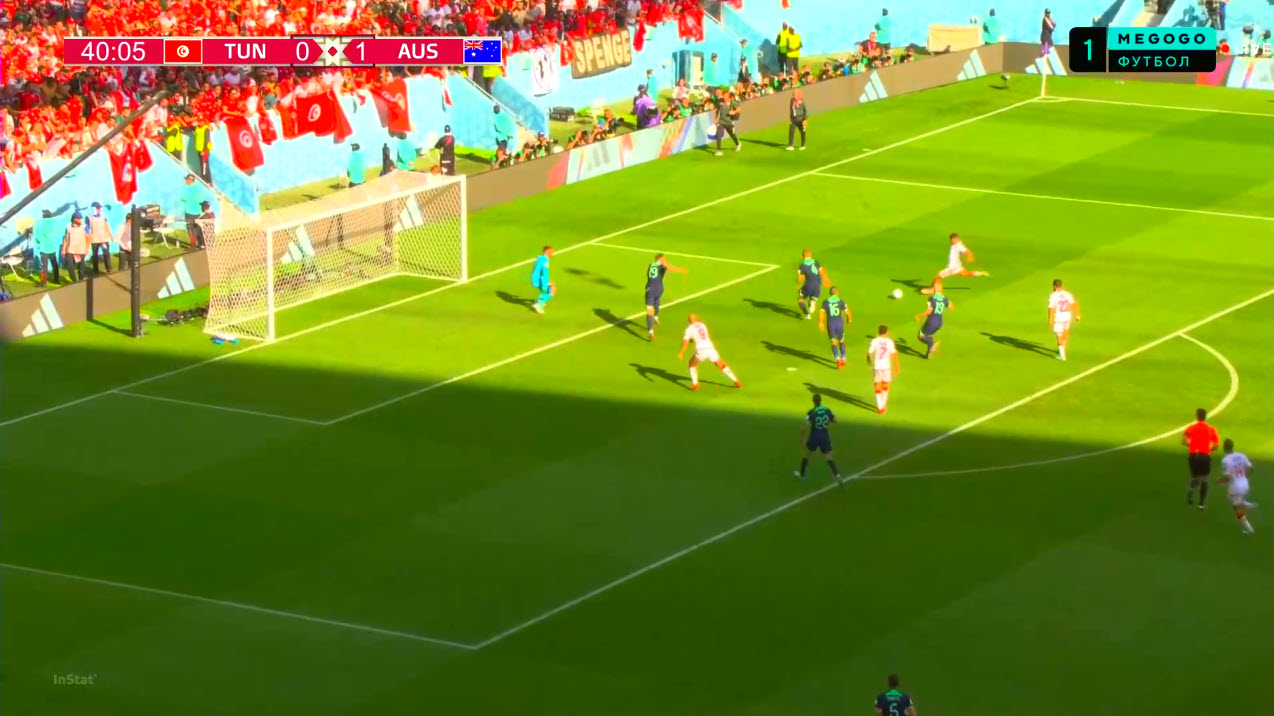 Tunisia created numerous other opportunities during the second half but failed to convert them into goals, sometimes due to players’ failure to shoot accurately and some other times due to Australia’s compactness inside the box and their physical abilities. But what is certain is that Tunisia could have done more in terms of goalscoring.

It is fair to say that Australia were very intelligent during this match as they knew when to attack and when to fully retreat in order to defend well. The team succeeded in scoring an early goal and then tried to slow down Tunisia’s attacks by any means and prevent them from reaching the box so often. They partly succeeded in doing so and even when Tunisia reached the box, the goalkeeper and the defenders were always ready to prevent the ball from entering inside the net. It is however true that Australia could have conceded one or more goals during this match but Tunisia’s lack of killer instinct in the final third helped them win without conceding any goal. Moreover, Australia’s reliance on crosses from the wings towards Duke and McGree paid off during this match as Duke was able to score the single goal of the match thanks to an excellent header coming from Goodwin’s cross which was deflected and changed its direction to meet Duke’s header at the right place and the right timing.  In addition to Duke’s great header, it must be said that Meriah’s marking was not good enough in that chance as he didn’t mark Duke closely and left too much space for him to deal with the ball in the way he wanted and without any disturbance. 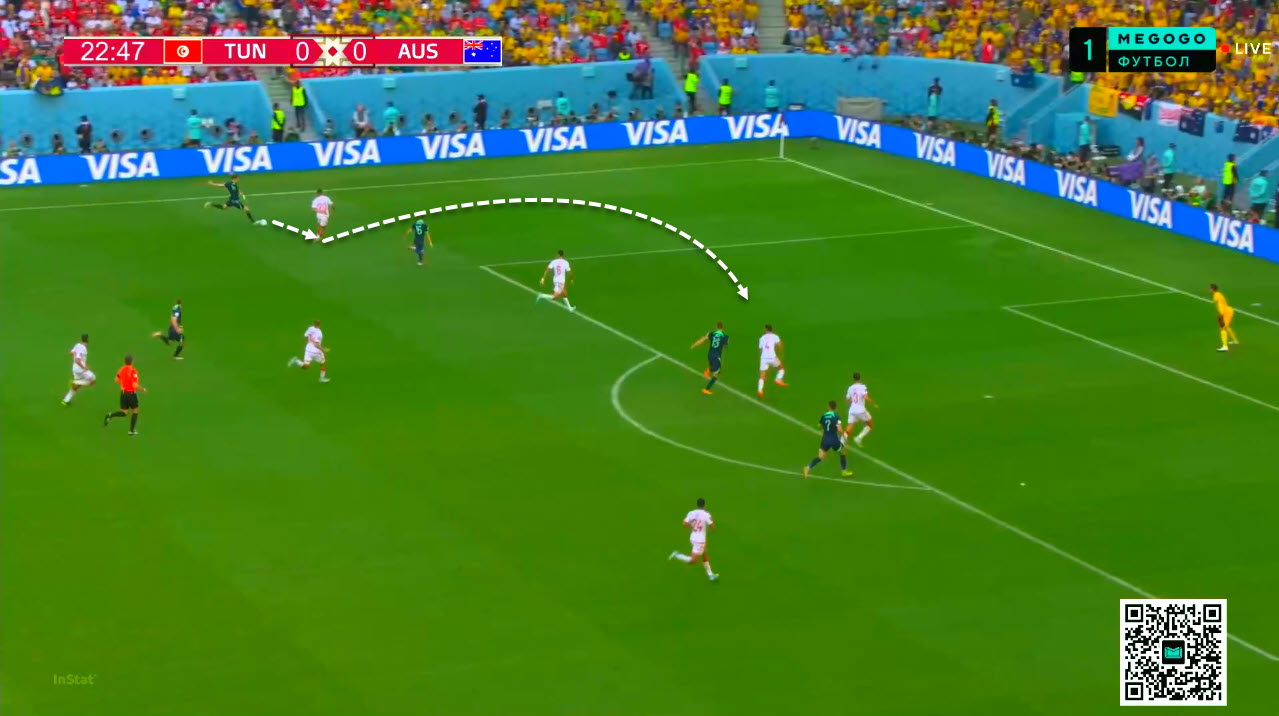 Australia had another clear goalscoring chance during the second half and could have made Tunisia’s mission even more complicated when Jamie Maclaren launched a counter-attack and provided a through pass towards Leckie who failed to meet the ball at the right time despite attempting a sliding tackle. And as you can see below, Australia could have exploited Tunisia’s defensive issues once again as they were too close to adding a second goal. 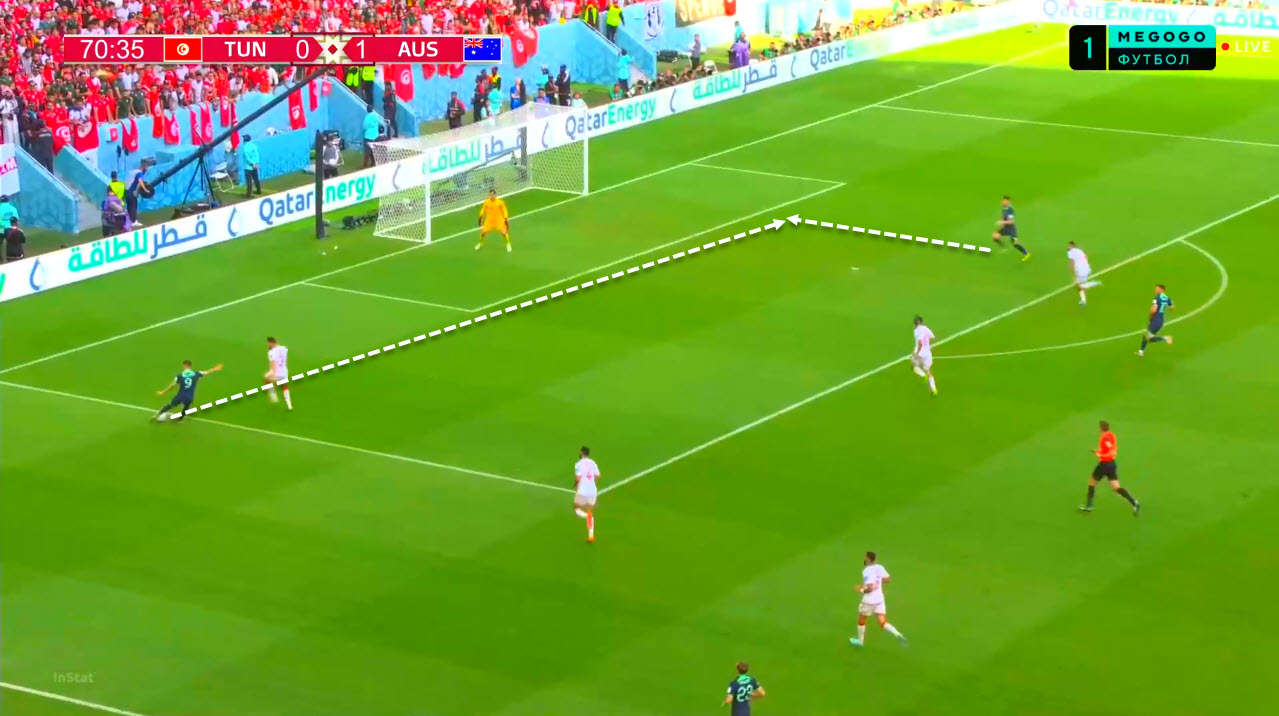 This match was a nightmare for Tunisia as they were intending to win following a draw against Denmark. However, football has always showed that each match has its reality and in order to win, the team has to make minimal errors both in attack and defence, which was not the case for Tunisia in this match and they paid the price for their errors.

On the other side, Australia believed in their chances and exploited their strengths in the best possible way while waiting for Tunisia’s errors to occur. The team played the match intelligently despite risking conceding goals on more than one occasion. They will have to keep playing with the same attitude against Denmark and not feel relaxed in order to not lose what they achieved during this encounter against Tunisia.