As the greatest tournament in world sporting competitions has begun, now would be a great time to have a quick look at some players to watch in this World Cup, specifically from the Belgian Pro League. When glancing at all of the rosters for this edition of the World Cup, players like former Ajax and current Club Brugge winger Noa Lang, Anderlecht youngster Zeno Debast, and Genk’s exciting fullback Angelo Preciado are Belgian-based players that many people have already heard about or are starting to become household names.

In this tactical analysis and scout report, we will take a look at some of the lesser-known players that are looking to make a name for themselves in this edition of the FIFA World Cup. From goalkeepers to forwards, these Belgian-based players will look to show on the world stage just how talented they are.

Starting with goalkeepers, other than former Liverpool goalkeeper Simon Mignolet, the only other shot-stopper named to a World Cup squad is KAS Eupen and Ghana international Abdul Manaf Nurudeen. The 23-year-old has played his entire senior career with The Pandas, after joining from the Ghana-based Aspire academy in 2017. After not making a senior appearance for Eupen in three seasons, the Accra-born goalkeeper finally made his debut in the 2020/21 season.

However, the following season was when he made his big breakthrough. In the 2021/22 season, Nurudeen became Eupen’s most utilised goalkeeper, although he was rotated out at times, and missed time with injury. All in all, the keeper started 20 of a possible 34 Belgian Pro League matches last season, conceding 34 goals in those matches. He also made his international debut this calendar year, with the 23-year-old starting against Algeria in an international friendly, with his second cap coming this summer, playing 90 minutes in an international friendly win against Chile.

When it comes to looking at some goalkeeping strengths that Abdul Nurudeen possesses, he has relatively decent distribution. In his senior career so far for Eupen, the Ghana international averages 18.56 passes per 90 minutes with an accuracy of 83.6%. With Eupen not being much of a possession-based team in the Belgian league, Nurudeen plays the ball long often from goal kicks. He averages 7.08 long passes per 90 minutes with an accuracy of 62%. 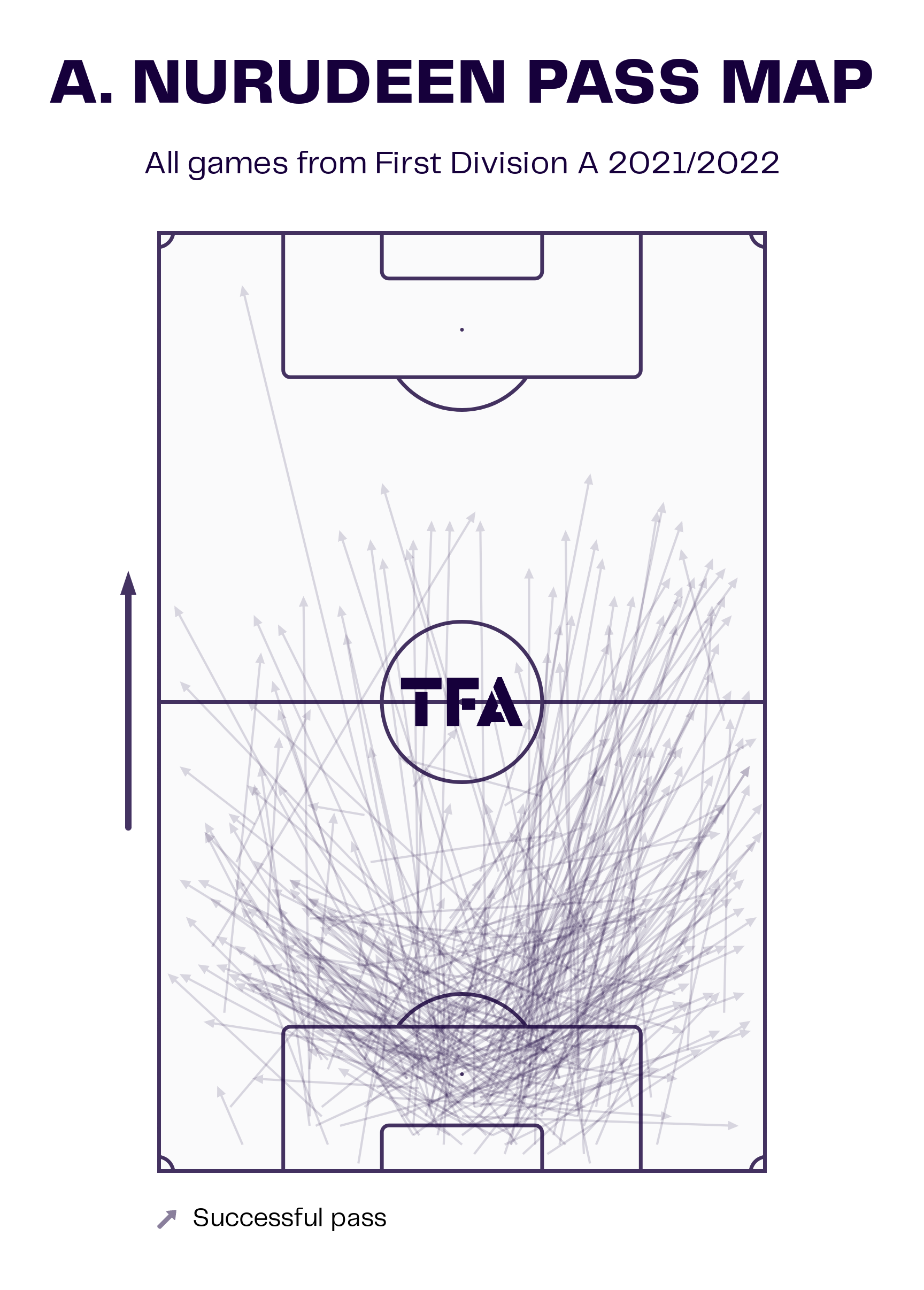 The data viz above shows the Ghana goalkeeper’s pass map from the 2021/22 season, highlighting the tendency for him to go long on goal kicks for Eupen. This pass map is also able to illustrate the range that Nurudeen possesses on his goal kicks, with the Ghana goalkeeper having the ability to play the ball past the halfway line and into the opponent’s defensive third.

The Ghana international also has a good shot-stopping ability. When looking at goalkeeper rankings for the Belgian Pro League in the 2021/22 season, Nurudeen ranked 9th in shots against, with 5.11. This shows that he had a poor defence in front of him, but the keeper came up big in these situations. Out of these 5.11 shots faced per 90 minutes, Nurudeen only conceded 1.58 goals. While this still is not a great number, it shows the quality that he possesses when it comes to shot-stopping.

When it comes to the goalkeeping situation with the Ghana national team, manager Otto Addo has brought three goalkeepers to the World Cup, with St. Gallen’s Lawrence Ati-Zigi and Asante Kotoko’s Ibrahim Danlad joining Abdul Nurudeen in the goalkeeping ranks. Addo will likely start Ati-Zigi in goal for matchday one against Portugal, with the St. Gallen keeper starting every game so far for the 3rd placed Swiss Super League side. Still, keep an eye out on Abdul Manaf Nurudeen if he is given his chance this tournament.

Though he did not play any part in Mexico’s goalless draw with Poland on match day 1, Gerardo Arteaga will hope that Tata Martino gives him a chance in the next match against Argentina. The Mexican international fullback has once again been a valuable part of Genk’s squad for this season, starting every match for the 1st placed side this season.

Since joining the Belgian side from Liga MX side Santos Laguna in 2020, Arteaga has been a constant regular in their side, and that has continued this season under Wouter Vrancken. Arteaga is not as involved going forward as his Colombian counterpart Daniel Muñoz on the opposite flank, with Arteaga only having 2 goals and 1 assist so far this season. 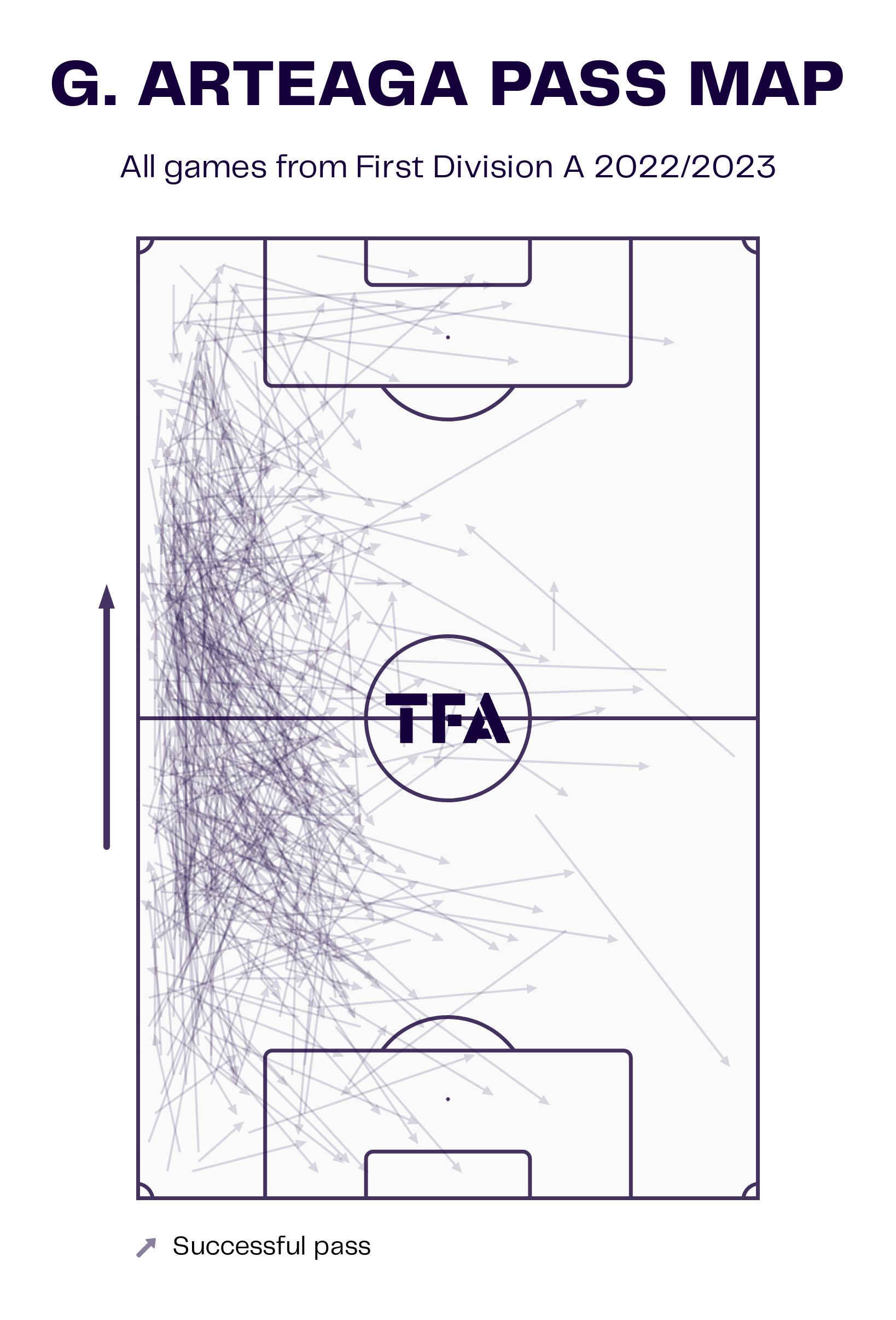 Arteaga is excellent when it comes to his distribution, with the Mexican averaging around 44 passes per 90 minutes so far this season, with a passing accuracy of 83%. The data viz above shows the pass map of Arteaga this season, highlighting his tendency to be involved in the attacking third. In fact, judging by the data viz, the fullback spends about the same amount of time in the attacking third as he does in the defensive half of the pitch.

The 17-cap Mexico international will be one to watch out for in this World Cup from the Belgian League. While he did not see any time in their first match, with Martino opting to start CF Monterrey’s Jesus Gallardo at left back, the Leeds United and Brighton-linked Arteaga will likely see time in their next group stage match.

Selim Amallah is probably one of the most interesting players to keep an eye on from the Belgian Pro League in the 2022 FIFA World Cup. The 26-year-old has been a key player for Standard since joining the club in the summer of 2019 from Excel Mouscron and has had a fantastic season so far under former NYCFC boss Ronny Deila. The Moroccan international has 4 goals and 1 assist in 9 matches so far this season and started in Morocco’s first match of the World Cup against Croatia. 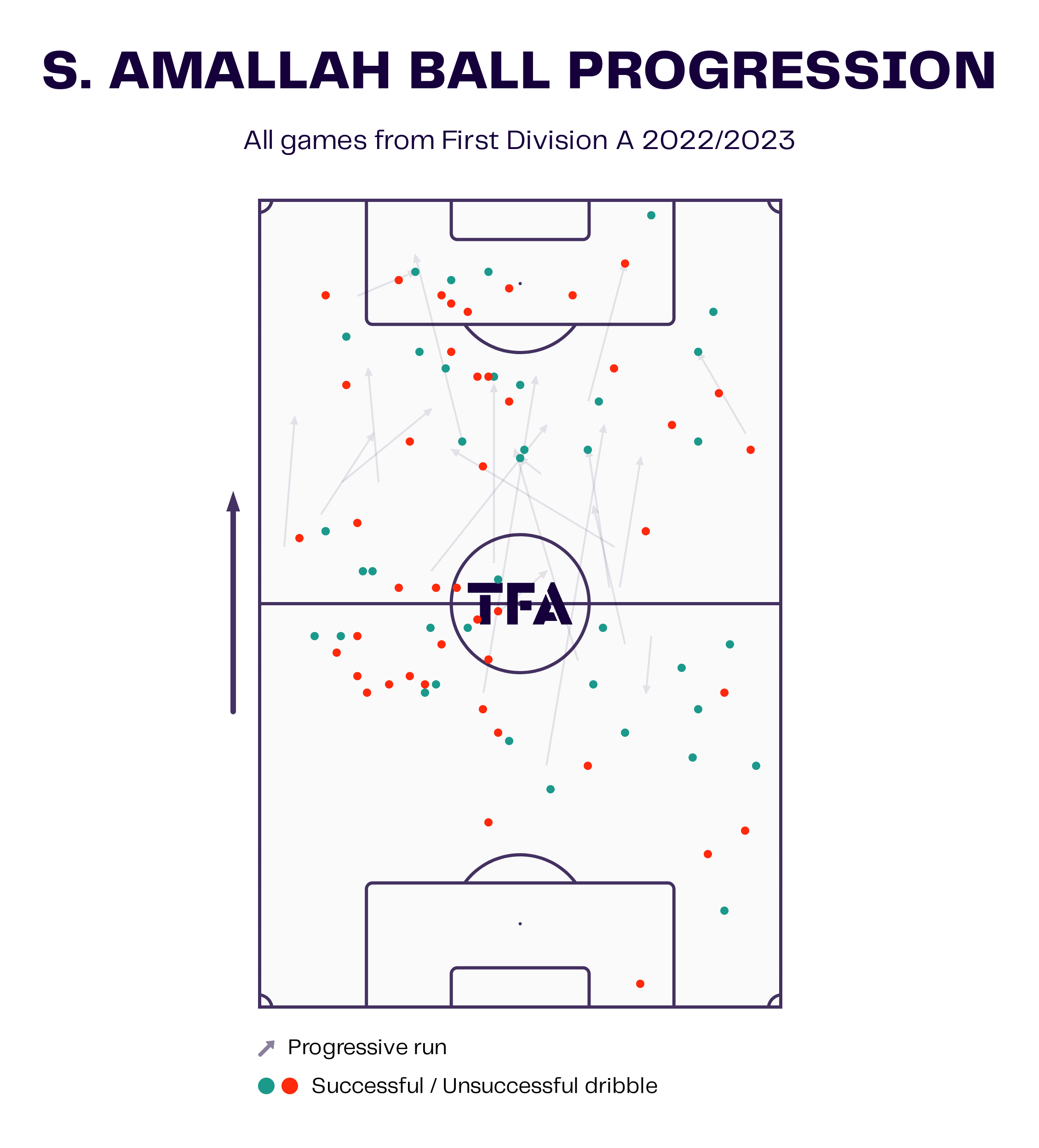 Ball progression is one key trait to look out for when it comes to watching Amallah’s performances at the World Cup. In the Belgian Pro League so far this season, the Moroccan international has averaged 8.67 dribbles per 90 minutes, with a success rate of 47%. As we can see by the data viz, the majority of his attempted dribbles have occurred in the attacking half of the pitch, but he also attempts them in his defensive half. He has also lost possession in some dangerous defensive positions, showing the risk/reward style of ball progression that Amallah prefers to use.

When it comes to the World Cup, Amallah is expected to start every group stage match, with the midfielder being a great fit for the tactics of new manager Walid Regragui for the Atlas Lions, with the hope that they can make it out of the group stages. When watching the World Cup, make sure to keep an eye on Selim Amallah and his contributions for Morocco in this tournament.

The next player that we will do a short profile on for the ones to watch is Club Brugge and Ghana forward Kamal Sowah. The Ghana international was once Club Brugge’s record signing, joining from Premier League side Leicester City. However, the beginning of his first season at the Belgian champions did not go according to plan, with him joining Eredivisie side AZ Alkmaar on loan for the second half of last season.

However, since coming back into the first team fold this season, Sowah has become a key player under new manager Carl Hoefkens and will hope to be the same for Otto Addo’s Ghana in the World Cup. The winger has played every match for Club Brugge so far this season in Belgium, gathering 4 assists in that period. He also has 2 goals in the Champions League this season. 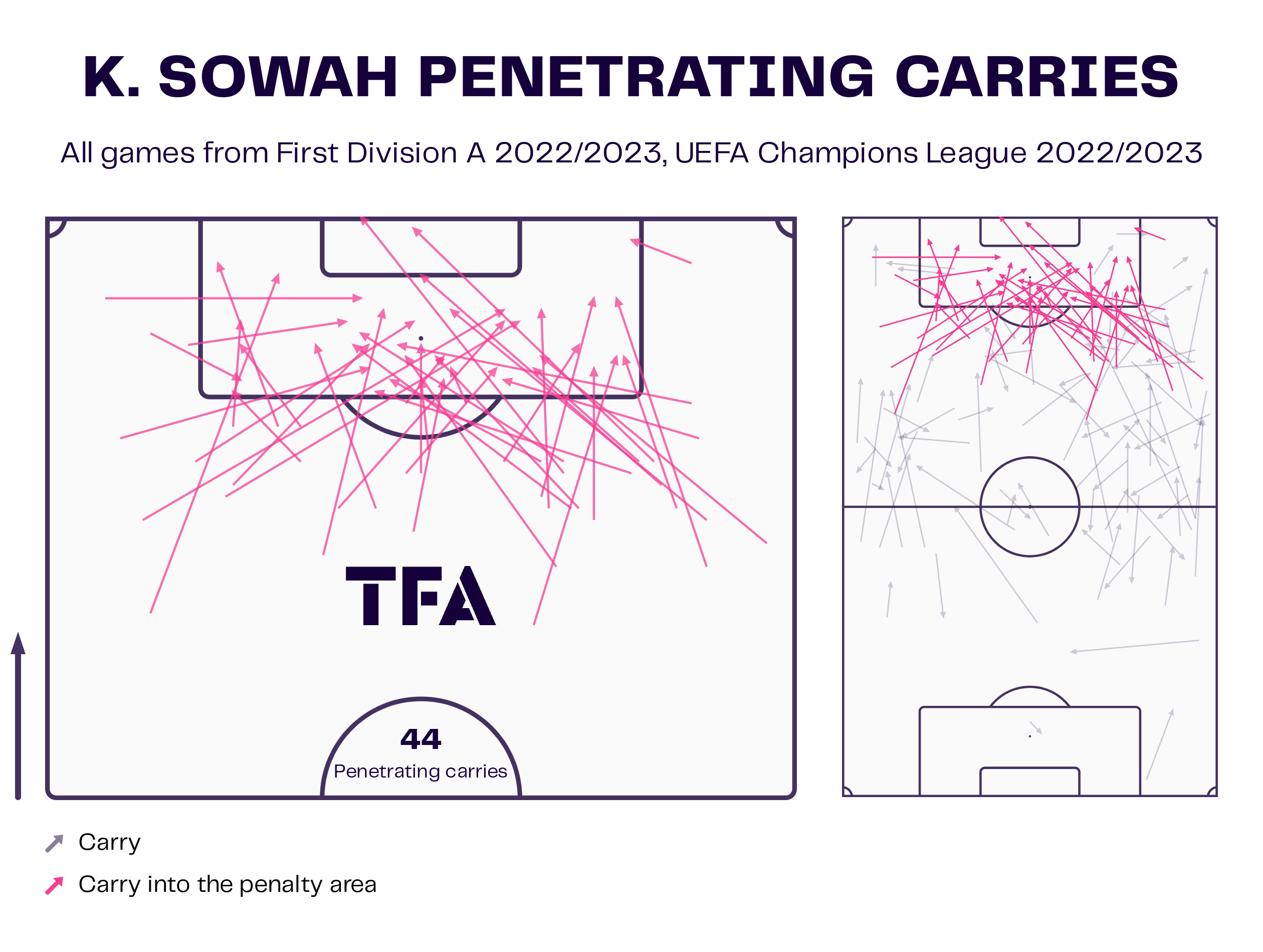 The main strength that we will look at when it comes to the Ghana international is his ability to carry the ball forward and penetrate the opposition’s defensive lines. This data viz is also able to illustrate Sowah’s involvement when it comes to in and around the penalty box. His 44 penetrating carries into the penalty box highlight his attacking contributions and is what makes him a dangerous player going forward. Sowah also is decent when it comes to his ball distribution, with the winger averaging 31.39 passes per 90 minutes, with a success rate of 78.3%.

All in all, Otto Addo will have a dilemma on his hands with whether or not to start Kamal Sowah. It is unlikely Sowah will start, with Ajax’s Mohammed Kudus, Stade Rennais’s Kamaldeen Sulemana, and Crystal Palace’s Jordan Ayew all ahead of him in these attacking positions. However, if he is introduced off the bench later in matches when the opposing defences are tired, then keep an eye out for the talented winger.

The last player that we will profile is the Cercle Brugge and Japan forward Ayase Ueda. The Japanese forward joined the Belgian side from JLeague side Kashima Antlers in the summer and has become the star striker for Cercle Brugge this season. The forward has 7 goals in 17 appearances this season and was rewarded with a spot in Japan’s World Cup squad, with Celtic forward Kyogo Furuhashi missing out as a result. 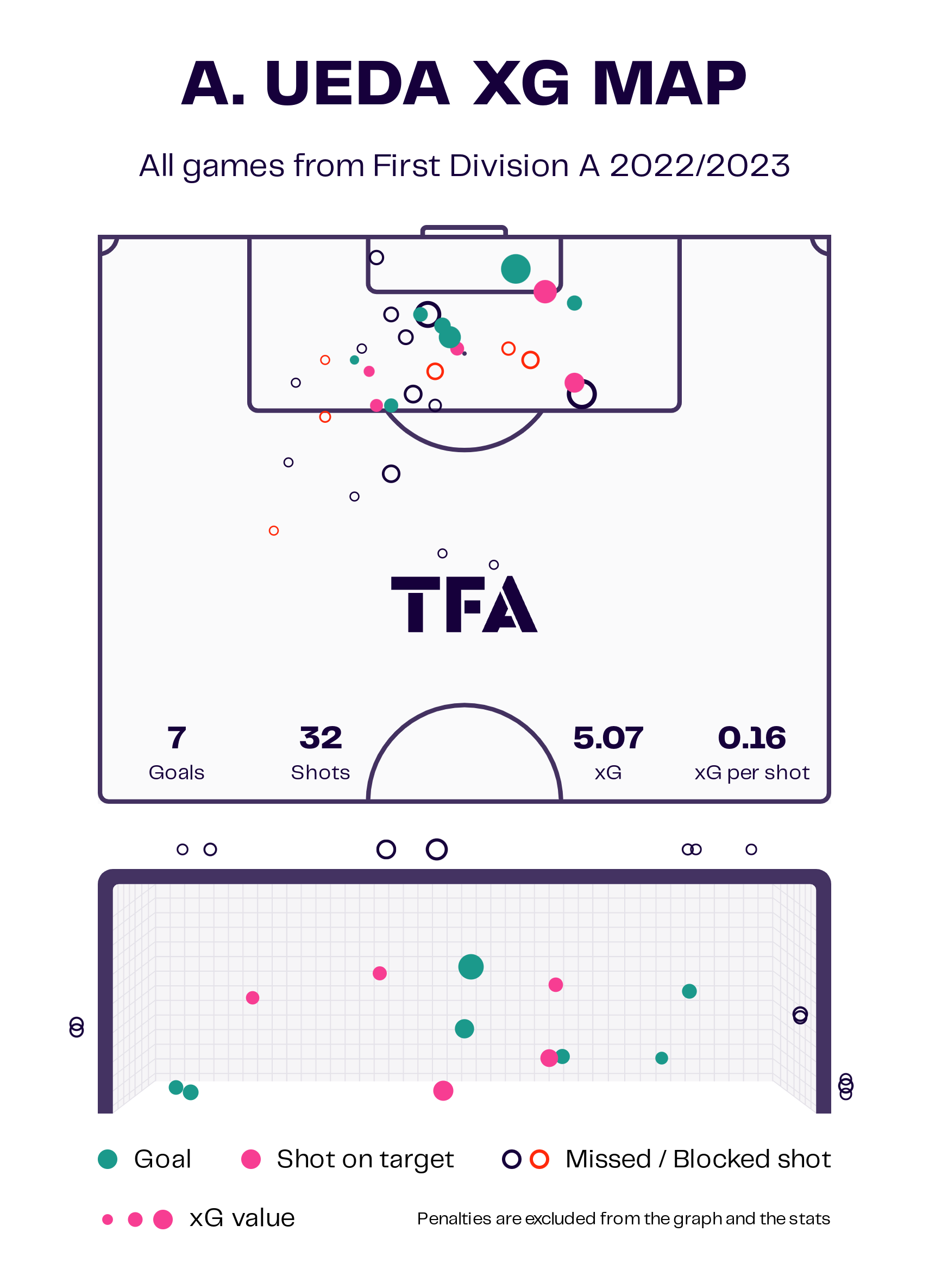 The data viz above shows the xG map of Ueda this season, which is able to illustrate where his shots have been occurring from this season. As we can see by the graphic, the Japanese forward is slightly overperforming his xG, with his 7 goals coming on 5.07 xG. The goal map also shows that the majority of his goals have come from around the penalty spot, with Ueda being more of a poacher-type finisher, finding spaces in the box to be able to receive the ball and quickly attempt a shot on goal.

Ueda did not start for Japan in their first match of the World Cup against Germany, but as the tournament progresses, he will be another name that fans will want to keep an eye on when it comes to players that are in the tournament from the Belgian Pro League.

As this tactical analysis and scout report has shown, these are five players to watch from the Belgian Pro League in the World Cup. Most of these players are not the most well-known around football, but if they put in performances at the biggest sporting event in the world, everyone will know who they are by the end of the 2022 FIFA World Cup.