Aston Villa and their head coach Carla Ward deserve the praise following their convincing performance and result as they didn’t give up throughout the match, continued to attack even when things got complicated and were very determined to get the result they wanted. The players played with the right mentality during this match and they will be having a very successful season if they approach every game with the same courage, determination and passion.

On the other side, Manchester City should revise their tactics and plans and work a lot on the psychological aspect as well, knowing that the team made one of their worst starts to a season ever. The Citizens were knocked out from the UEFA Women’s Champions League very early by Real Madrid Women in Round 1 and, instead of bouncing back in the FAWSL to forget that defeat, they also lost a match in which they were favourites and especially a match that they were winning 3-2 at a certain point.

In this tactical analysis article, we will be providing an analysis of Aston Villa’s convincing performance, especially from an attacking perspective and identifying Manchester City’s issues that led to their first FAWSL loss of the season.

Aston Villa started the match in a 4-3-3 formation with Hannah Hampton as a goalkeeper, Sarah Mayling, Anna Patten, Danielle Turner and Mayumi Pacheco in defence, Kenza Dali, Rachel Corsie and Alisha Lehmann in midfield, Laura Blindkilde and Kirsty Hanson as wingers while Rachel Daly was the team’s striker.

On the other side, Manchester City opted for the 4-4-2 formation in this match with Ellie Roebuck as a goalkeeper, Esme Morgan, Steph Houghton, Alex Greenwood and Demi Stokes in defence, Laura Coombs and Laia Aleixandri as central midfielders, Chloe Kelly and Lauren Hemp on the wings while Khadija Shaw and Filippa Angeldahl forming the attacking duo. 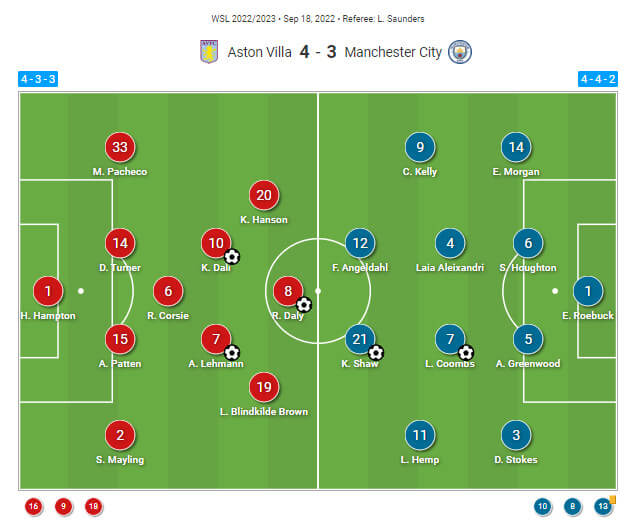 Aston Villa started the match with excellent organisation in defence and in attack in order to limit the dangers of Manchester City players especially when knowing that they have got some of the best-attacking players. Aston Villa suffered when pressing high during the first minutes of the game as Manchester City were skilful and organised enough to be able to advance and reach Aston Villa’s own half despite the continuous pressing.

However, following the first 15 minutes, Aston Villa’s pressing became more efficient as the players pressed with more aggressivity and Manchester City players were not as accurate as at the beginning of the game. As you can see below, Aston Villa’s attacking players tried their best to force Manchester City defenders to fall into the trap of inaccuracy and hesitation in order to intercept as many passes as possible. 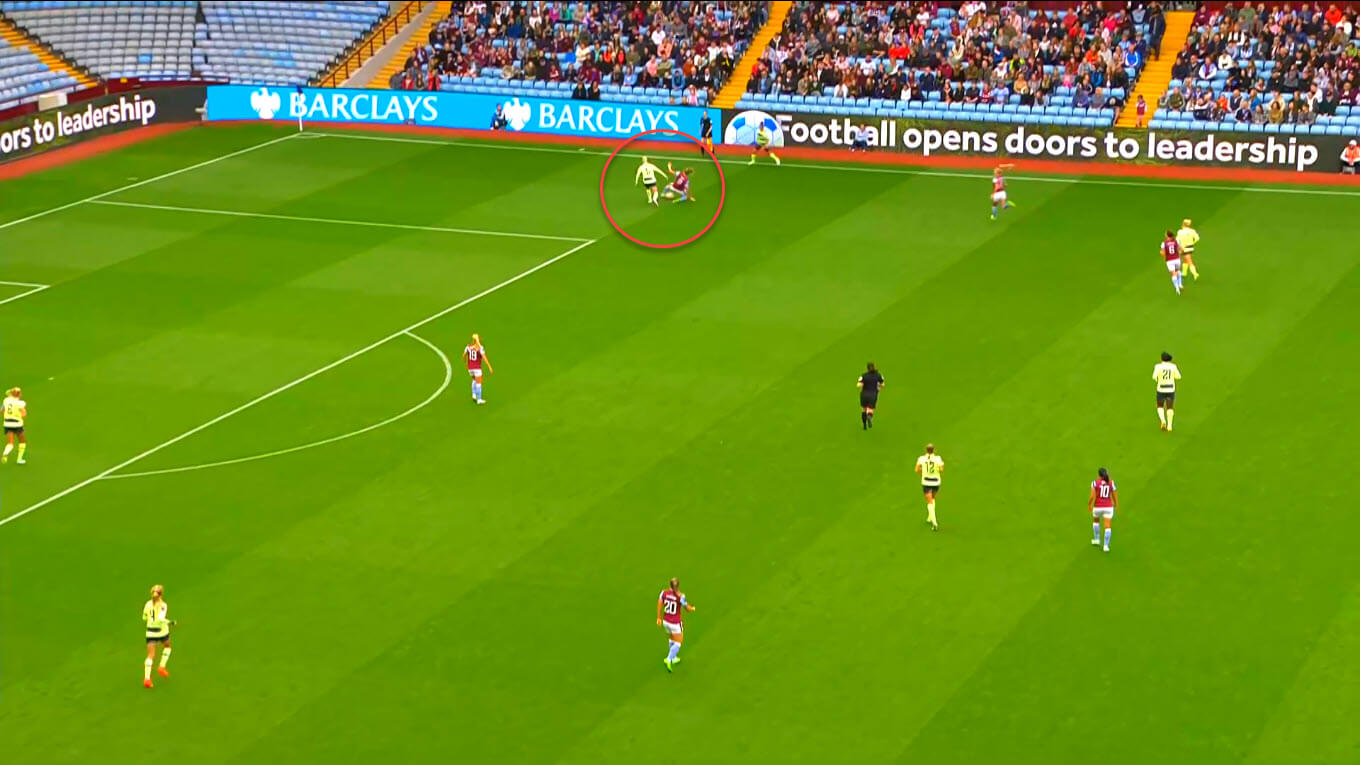 This reliance on such a suitable out-of-possession plan gave its fruits in a clear way just a few minutes later when Daly made a sliding tackle to intercept the ball from Aleixandri who was neither protecting the ball very well nor being quick enough to circulate it and put herself under similar pressing. In fact, that sliding tackle was very important as it generated a key opportunity for Aston Villa’s first goal. 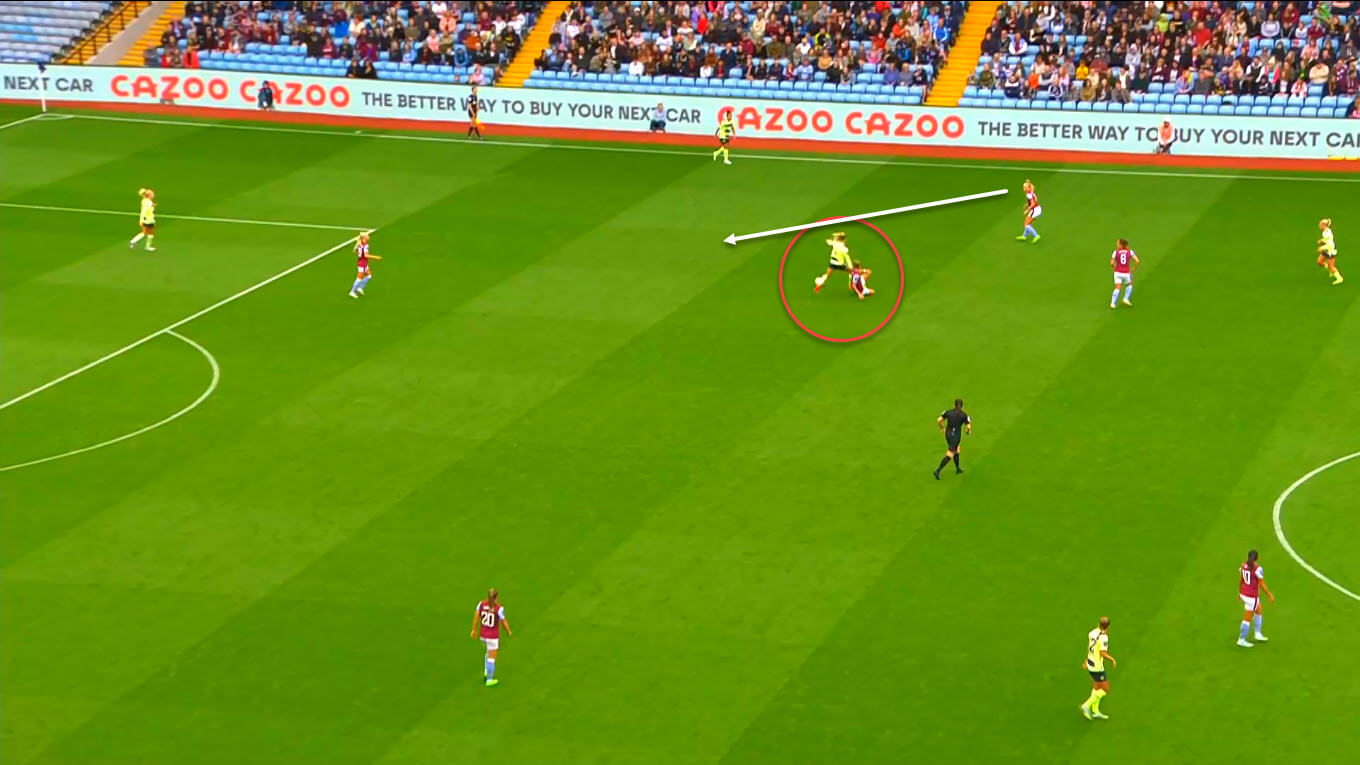 Lehmann found an almost cleared path in front of her as soon as she collected the ball and therefore she ran towards the goal, showing great confidence before fixing her direct opponent, doing a slight feint and shooting at the right timing with great accuracy to put the ball inside the net. 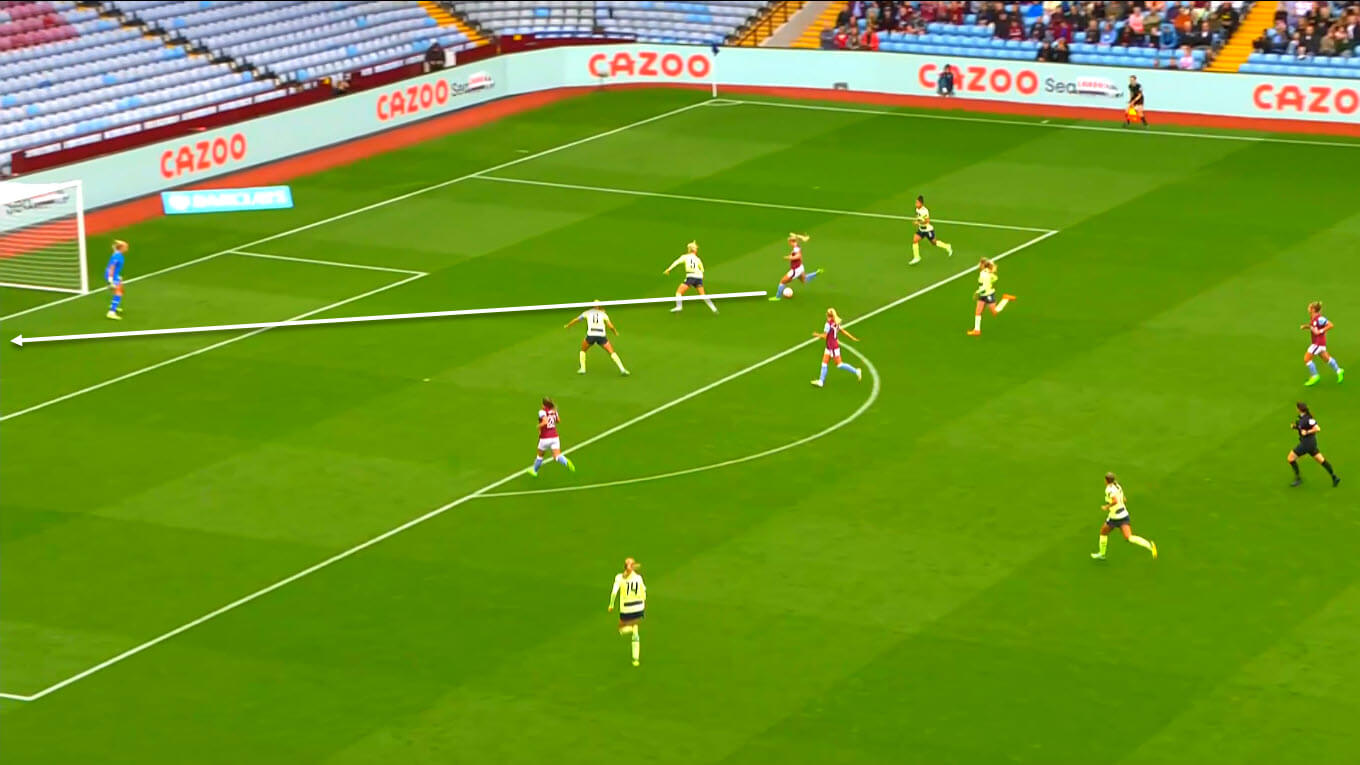 In addition to her excellent and effective contribution in the non-possession phase, Daly was also outstanding in terms of goalscoring and shooting, scoring twice in this match and making a huge impact on her team. As the graphic shows, she attempted five shots, scored two and had an xG equalling 1.28. 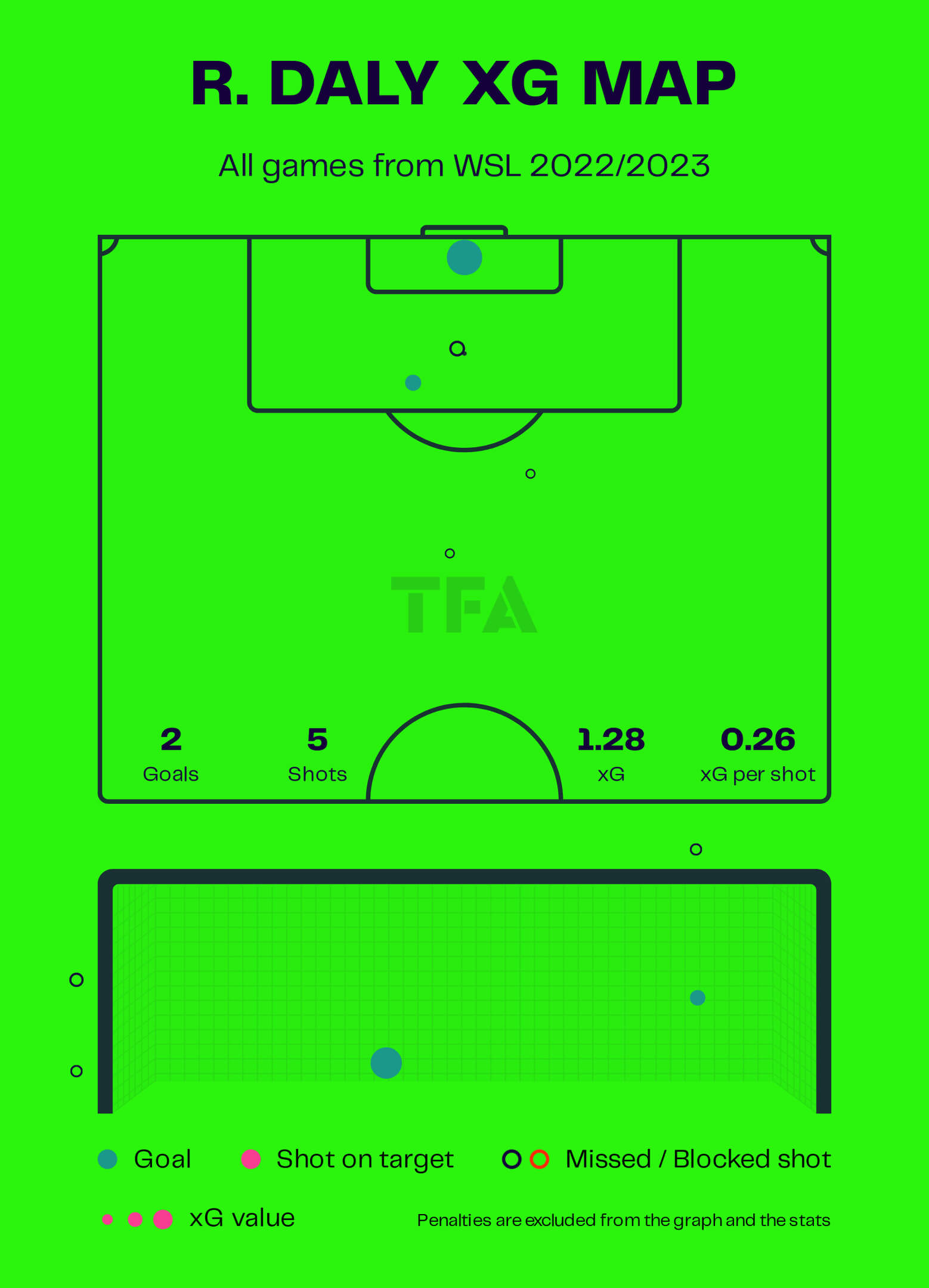 In particular, Daly’s first goal proved that she has some great shooting qualities and that she has a sense of the goal as well. That’s because she received the ball in a not very suitable position as she had her back towards the goal. Nevertheless, she was still able to coordinate her body perfectly and attempt a curved shot towards the far post without even looking to the goal beforehand, and that’s what made the goalkeeper’s mission complicated in this action. 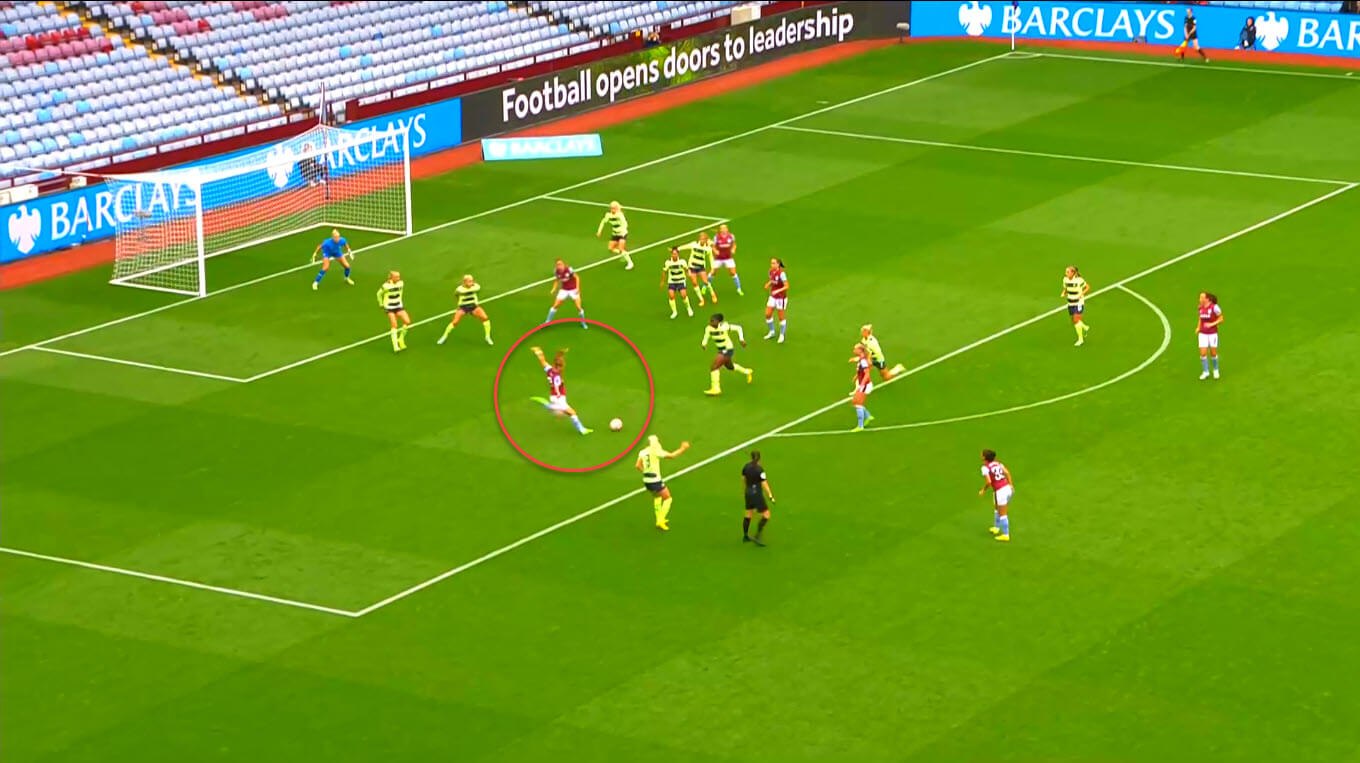 Aston Villa’s third goal didn’t differ from the other goals a lot as it was also exploitation of Manchester City’s defensive errors thanks to Aston Villa’s high pressing even in the second half. This pressing generated a wrong pass that was intercepted intelligently by Dali who advanced and went for a powerful shot that was deflected by a Manchester City player and went inside the net. 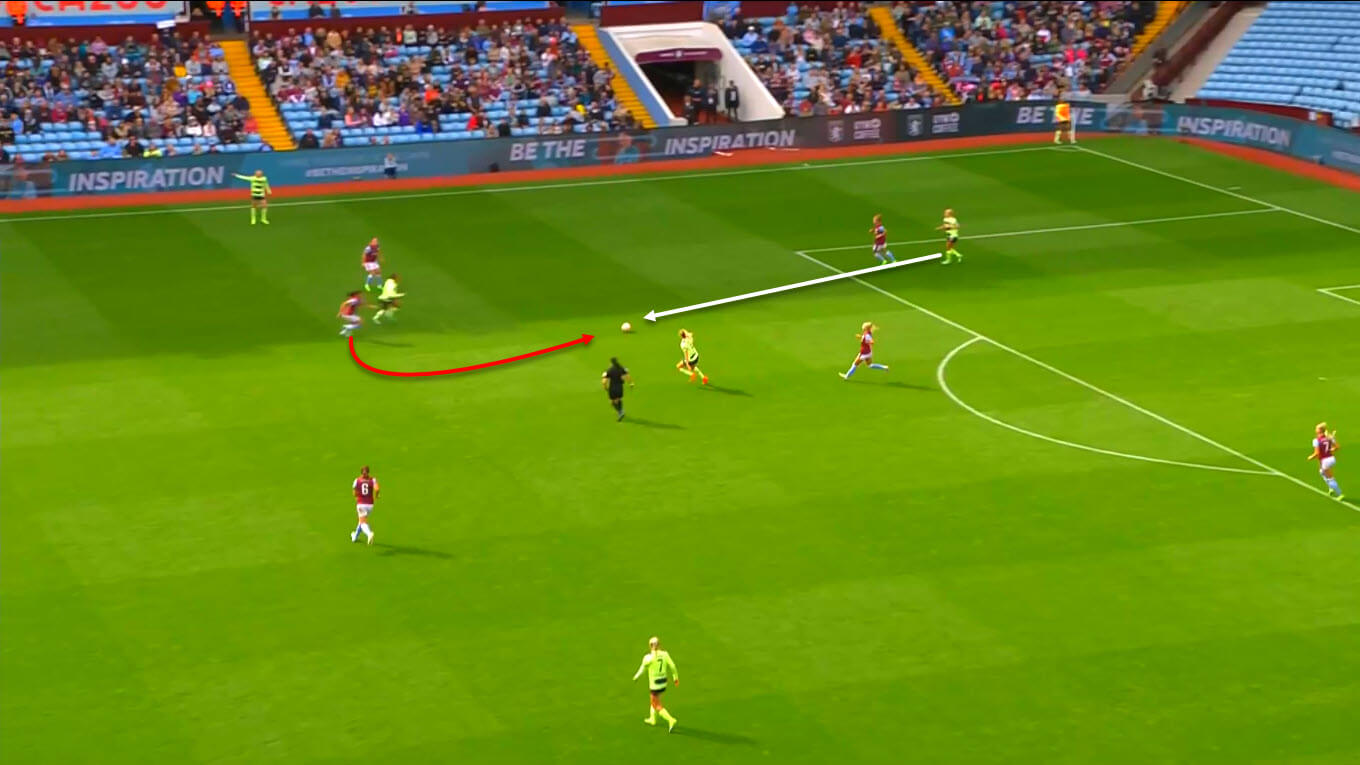 Manchester City’s performance was not a perfect one in this match not only because they lost the three points at the end but also because they conceded many goals and suffered to score goals back easily. Gareth Taylor has got some excellent players in the squad at the moment but the ideas are not really clear and the collective performance of the team lacks a lot of efficiencies, especially in comparison to the players’ individual quality/talent.

A lot of work needs to be done in this regard in order to exploit the players’ qualities even further and be more powerful as a team both in the defensive phase and in the offensive one. Moreover, an alternative solution needs to be found in relation to transitions and building from the back.

At the moment, the FAWSL teams are aware of Manchester City’s weaknesses and most of them will be looking to focus on these weaknesses. Therefore, the Citizens must transform this building from the back problem into one of the positives by creating alternative options for the various scenarios that could occur during games when Manchester City are in possession. Switching to long passes or starting attacks from the wings can be considered as possible alternatives which can be used by Manchester City when they face opponents that try to exploit their short passing build-up play.

Manchester City did their best to equalise and beat their opponent and they succeeded in doing so for a certain period, thanks to the efforts made especially during the second half during which they scored two goals, apart from a Coombs shot that surprised the goalkeeper and went inside the net late in the first-half. 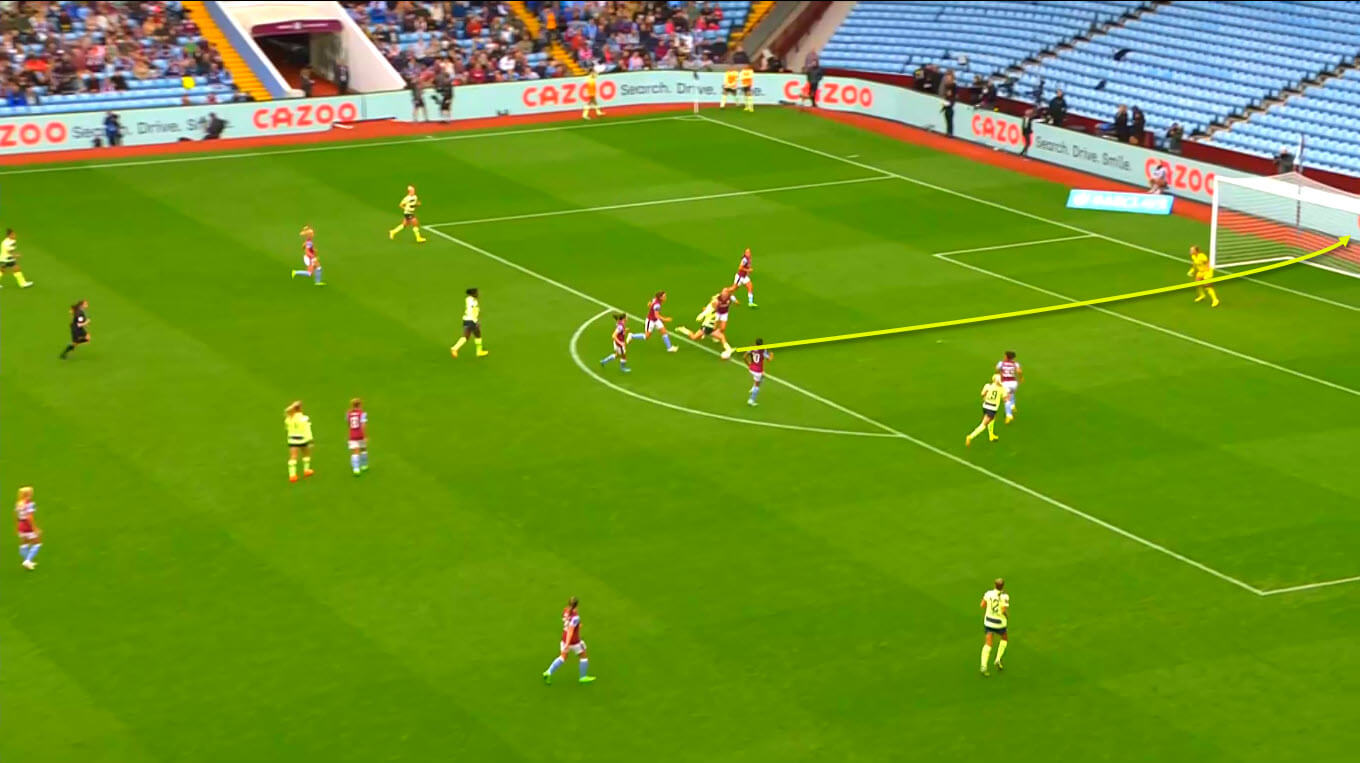 Their second goal was scored following a corner-kick directed towards Houghton who provided a key pass to Shaw, using her head in an intelligent way. The latter knew how to deviate the ball very well to confuse the goalkeeper with a strong header. 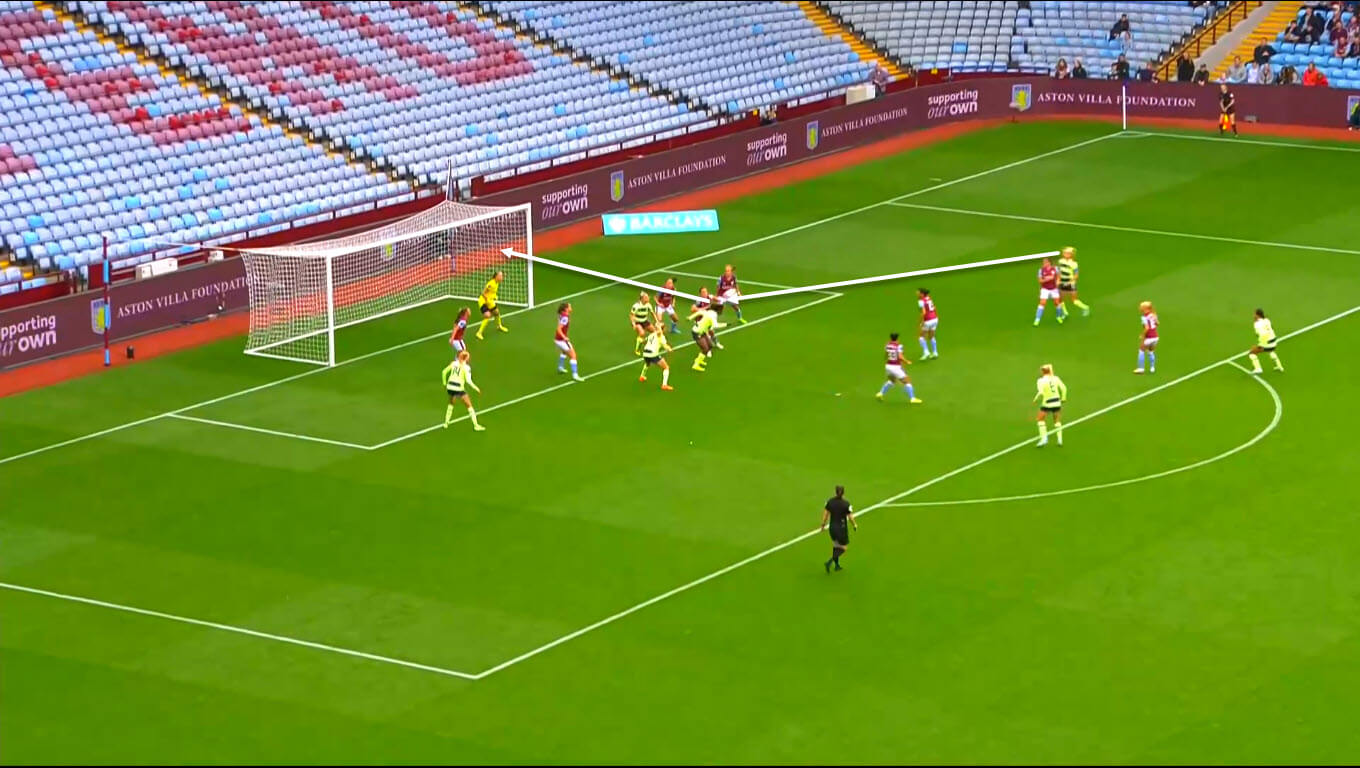 A few minutes later, Coombs confirmed her very solid performance by scoring her second goal of the match after controlling a difficult cross using her chest to drop the ball down before coordinating her body and executing a beautiful and powerful half-volley.

After the departure of numerous players, especially in midfield, Manchester City have now found one excellent replacement in this area and if she continues playing at the same level, Coombs has the potential to develop even further and become one of the best midfielders in Europe. 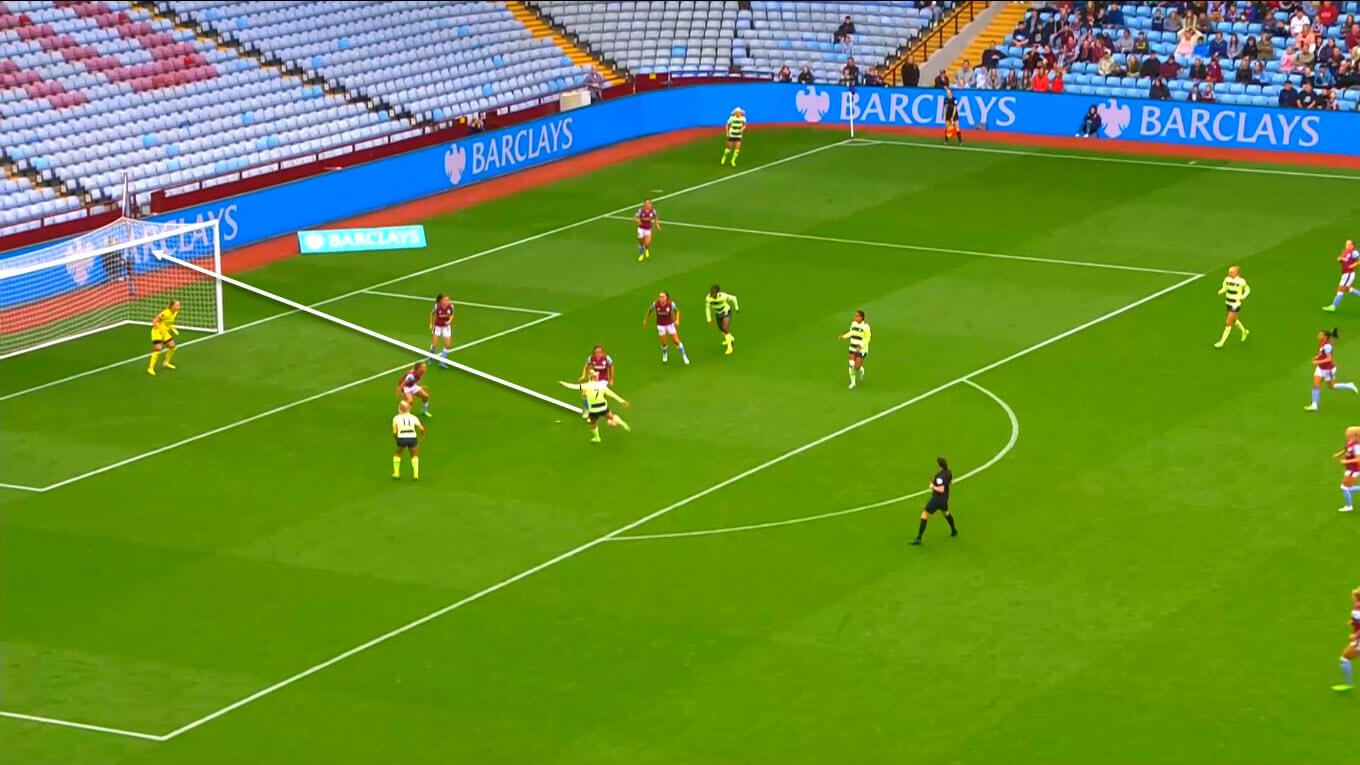 Aston Villa should build on this great performance to play with more focus and determination during the upcoming games and use what went well in this match while developing what needs to be fixed, especially from a defensive perspective. The team has now got some very reliable players who have the potential of becoming even more impactful players, such as Daly, who immediately showed that she can be much more useful as a striker and that she deserves to play in this position.

For Manchester City, a lot of work needs to be done to address the individual and the collective mistakes and add some clear ideas and alternative plans both for the attacking and the defensive phases before it becomes too late.