Aston Villa Women hosted Manchester United Women for the FA Women’s League Cup 2022/23 group stage fixture and the hosts were able to beat the Red Devils thanks to penalties after finishing regular time with a 1-1 draw. Aston Villa will therefore be having the advantage over their direct rival in the group stage, Manchester United, after getting this precious win. This will give Aston Villa a bigger chance of qualification to the next round if they keep their good run of form going and finish at the top of Group A which contains Aston Villa, Manchester United, Durham, Sheffield United and Everton.

With this win, Aston Villa have confirmed once again that they are starting the season in a very special and positive way as they won against Manchester City 4-3 before beating Leicester City 0-2 in an away game. And by winning against Manchester United, they put themselves in a very comfortable situation both in the FAWSL and in the FA Women’s League Cup as well.

Nevertheless, the players should keep their feet on the ground and approach every upcoming game with the same determination and realism in order to keep their winning streak for as long as possible. On the other side, Manchester United lost for the first time this season after beating PSG in the pre-season and after starting the FAWSL with a big 4-0 win over Reading and a 0-2 away win against West Ham. Even though this loss will not affect the team’s journey a lot since it was a group stage match and not a knockout or in the FAWSL, the team should not get used to such results and have to get back on track quickly to make up for this loss and challenge for a top FA Women’s League Cup spot in order to qualify for the next round.

Aston Villa started this match in the 4-1-4-1 formation with Anna Leat as a goalkeeper, Sarah Mayling, Rachel Corsie, Danielle Turner and Mayumi Pacheco in defence, Olivia McLoughlin just in front of the defensive line, Kenza Dali and Rachel Daly as central midfielders, Chantelle Boye-Hlorkah and Alisha Lehmann as wingers while Emily Gielnik was the team’s striker.

On the other hand, Manchester United opted for the 4-2-3-1 formation with Sophie Baggaley as the goalkeeper, Maria Thorisdóttir, Aïssatou Tounkara, Maya Le Tissier and Ona Batlle in defence, Vilde Bøe Risa and Jade Moore as central midfielders, Nikita Parris and Adriana Leon as wingers, and Lucy Staniforth as an advanced playmaker behind the striker, Martha Thomas. 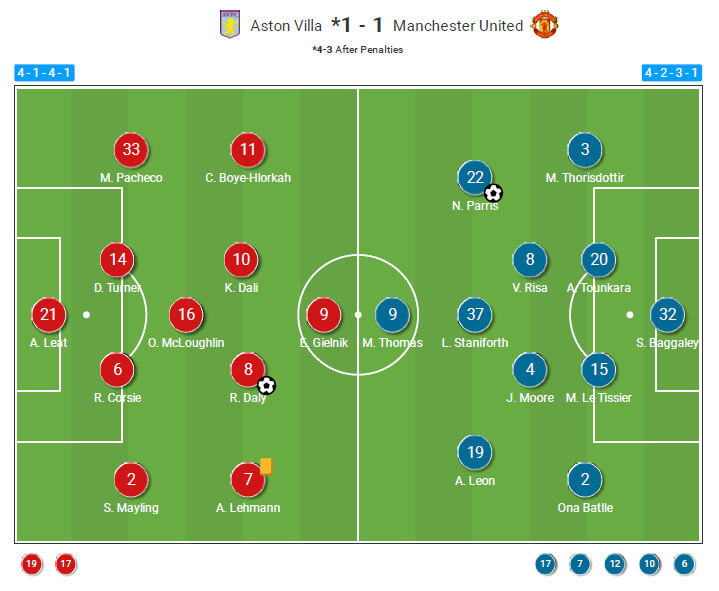 Aston Villa approached this game in the best of ways as they started the match with an attacking approach and tried to threaten their opponent early in the match thanks to their wide players and their through passes towards the box and specifically towards Daly and Gielnik.

Daly had some freedom inside the final third as she alternated between moving in midfield and providing passes at times and advancing to finish the action at other times. Daly’s finishing skills are becoming very impactful for Aston Villa as she is helping the team concretise the created chances in a very efficient way.

In the following example, she receives an accurate pass from Gielnik at the edge of the box after an excellent effort from Gielnik who intercepted the ball and created a counterattack from nowhere. Daly decided to immediately kick the ball with a first-time shot and her idea was rewarding as the goalkeeper was confused and didn’t see the ball coming. Therefore, she didn’t have enough time to react or try to deviate from it. But luckily for Manchester United, the ball hit the crossbar and went out. 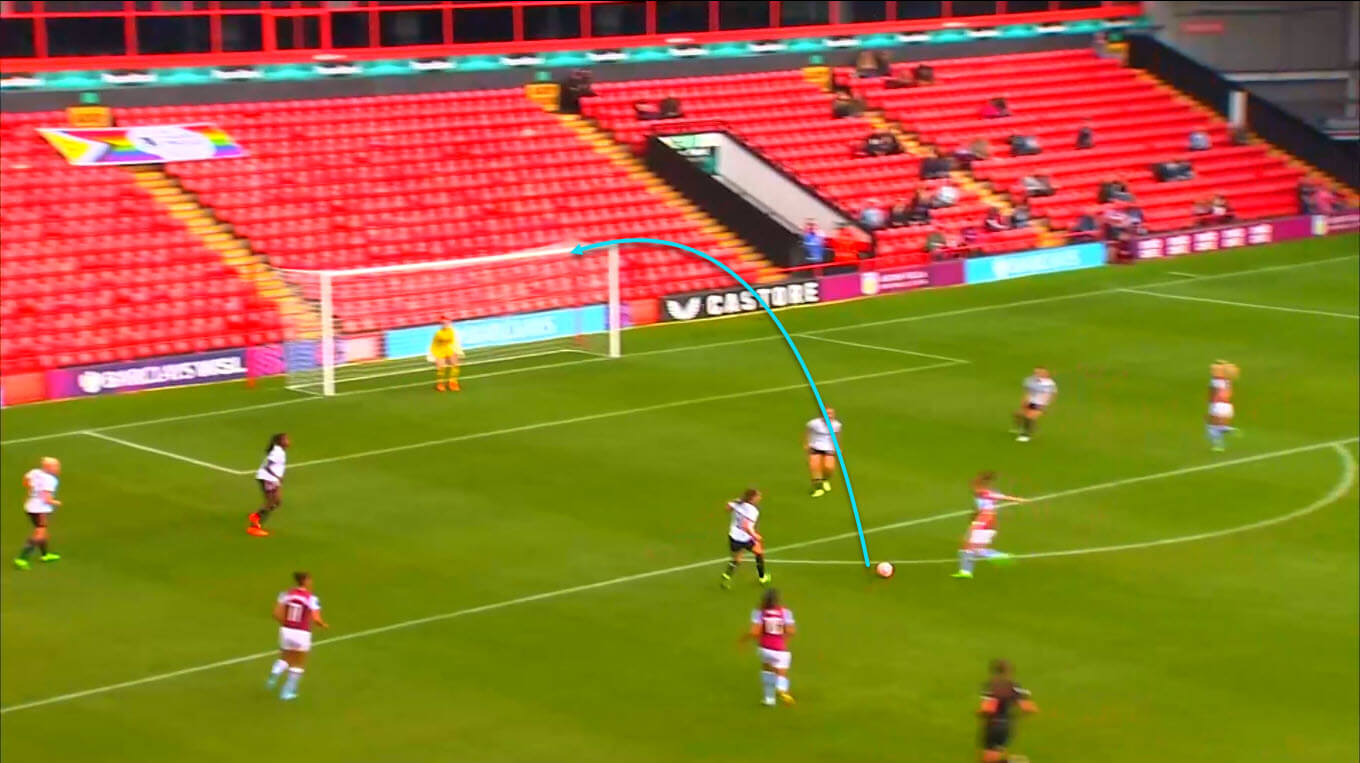 Here is a graphic that shows how dangerous can Daly be when playing in an attacking position. So far in this new season, her xG reached 2.32, scoring three goals in three games, without counting the penalty she scored against Leicester City. These statistics highlight Daly’s finishing abilities and show that she can excel at this position with Aston Villa and perhaps even with the Lionesses if she gets some playing time in that position. 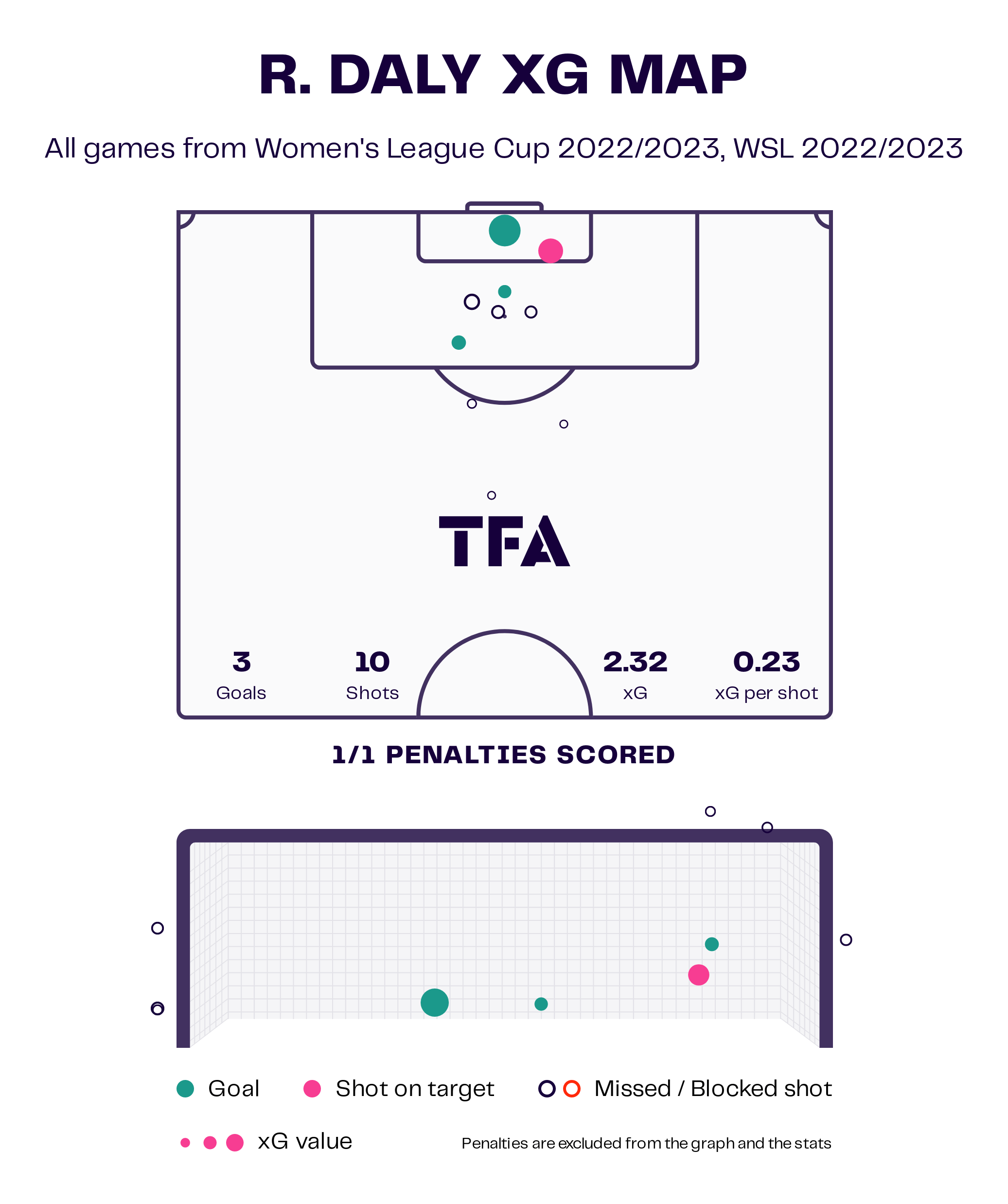 Following this dangerous action, Aston Villa failed to keep attacking Manchester United and conceded numerous attacks which were mostly led by Parris and Staniforth, the key attacking players of Manchester United in this match. They conceded a goal and risked losing the match before Daly scored the equaliser.

But it should be said that Aston Villa were not lucky enough in the first part of this match as they hit the crossbar twice before managing to equalise. The next picture highlights the second crossbar attempt after a sort of confusion inside the box that helped the newly subbed-in Laura Blindkilde to aim for a surprising and powerful shot. 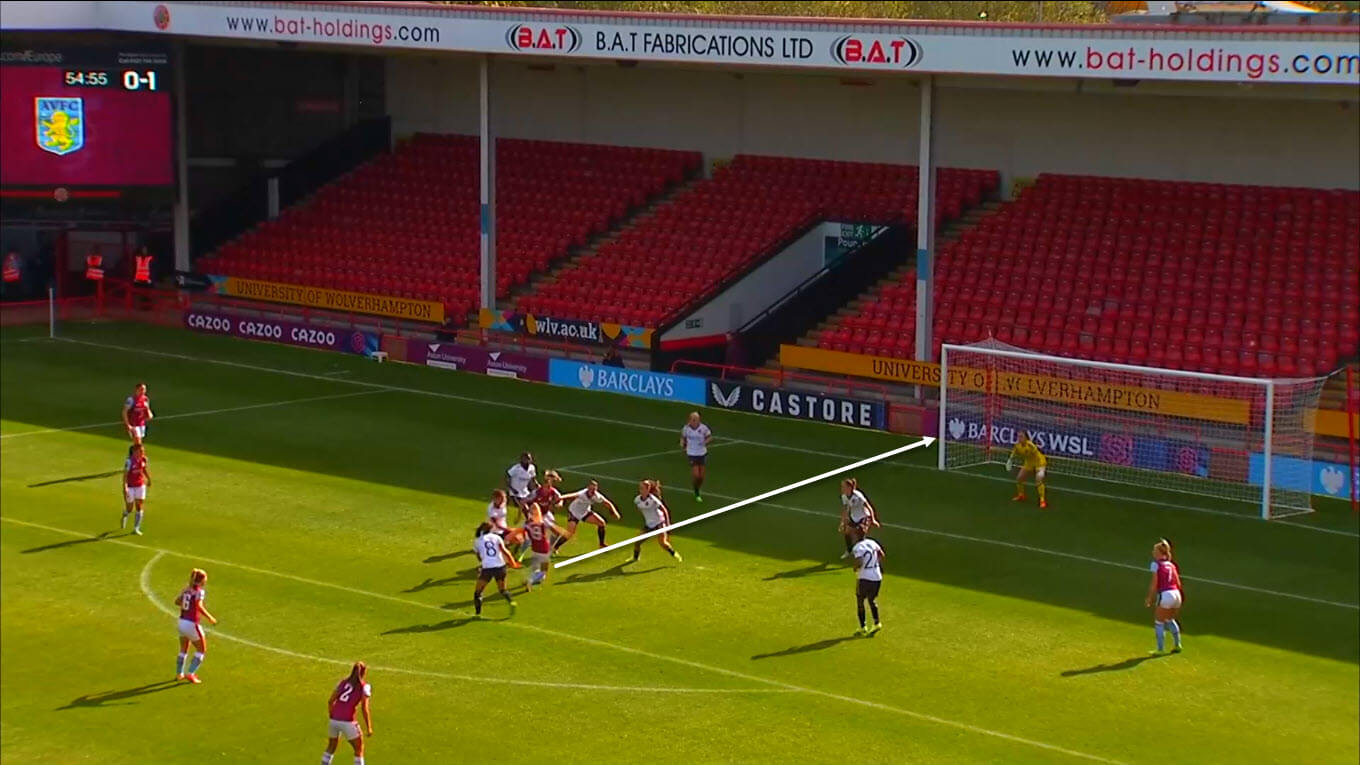 In fact, Aston Villa shot 13 times in this match with 5 shots on target while Manchester United made 15 shooting attempts but with less accuracy: 4 shots on target. This means that Aston Villa had a slight advantage in terms of concretisation despite the fact that Manchester United created a little bit more chances. But overall, Aston Villa’s attacking performance looked convincing especially when knowing that they faced a compact defence and still managed to score and avoid a painful loss thanks to Daly’s header.

Manchester United lost for the first time in the 2022/23 season and it was certainly a defeat that could have been avoided. The team lacks some defensive organisation and specifically has some marking issues as Aston Villa’s equalising goal was scored mainly because Daly wasn’t strictly marked during that action. Daly had the freedom of running towards the trajectory of the ball without being disturbed and therefore she was able to make the impact she wanted on the ball and put the goalkeeper in a difficult situation. 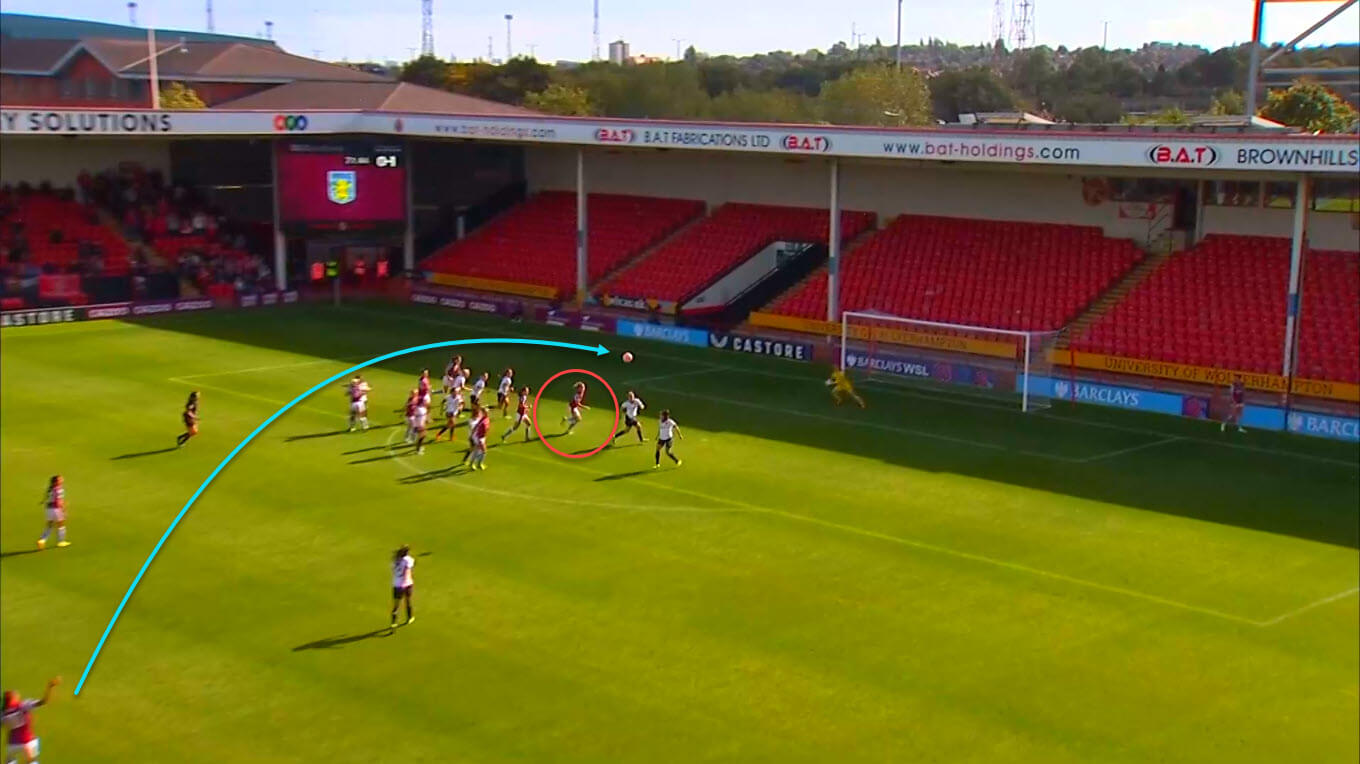 But if we would like to focus on the positive aspects, Manchester United has also played well on some occasions, especially during the first half, which shows that the physical condition factor played its role for the benefit of Aston Villa. Moreover, Staniforth’s penetrations and final passes were remarkable during this match and they helped Manchester United a lot.

The Red Devils’ single goal of the match however took place thanks to a Batlle penetration from the left flank towards the final third before passing to Parris who found herself in a very inviting position for shooting. Batlle was also intelligent enough to continue her run as if she was asking for the ball and that helped Parris get rid of one of the defenders who marked Batlle. Parris executed her shot in a very accurate and precise manner while putting some power into it in order to score a very beautiful yet difficult-to-execute goal. 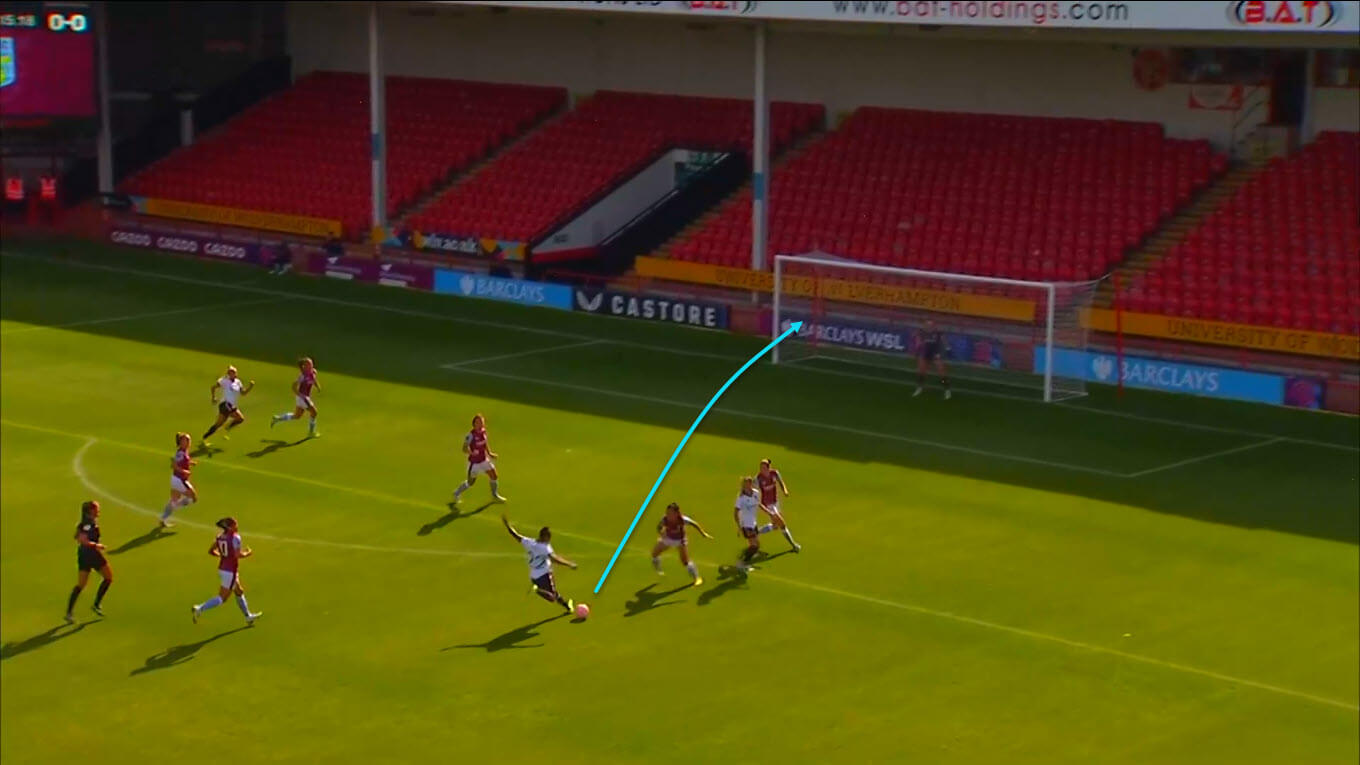 This goal however wasn’t enough for Manchester United who weren’t able to add a second one and looked a bit tired during the second half before conceding Aston Villa’s equaliser. Manchester United could have surely done better to protect their lead and why not secure it with a second goal, but they preferred to go for a riskier approach that didn’t provide positive results for the team.

Aston Villa’s win on penalties will certainly give an additional huge moral boost for the players and will surely provide them with a lot of confidence for the upcoming games. Aston Villa are now having their best starts of the season ever and if they keep their good run of form going, they can even surprise everyone and challenge seriously for a UEFA Women’s Champions League spot since they have the resources to do so.

For Manchester United, the team needs to revise numerous aspects in order to guarantee the improvement of the team’s performance in general. This includes assessing the defensive organisation, improving the marking mechanisms and roles with and without the ball, making sure to create more goalscoring chances and enhancing finishing rates by working on different attacking combinations. All these aspects can help the team be more powerful on the pitch if applied correctly, especially when bearing in mind that Manchester United doesn’t really lack quality players.