The Euro 2020 knockouts have featured some brilliant clashes that have been both entertaining from a visual as well as a tactical point of view. With three teams already having booked their semi-final berths, the final spot will be battled by Ukraine and world-cup semi-finalists England.

This tactical analysis will discuss the tactics deployed by both teams and will look into how Gareth Southgate’s men triumphed over their opponents. Let’s begin the analysis.

Ukraine lined up in their 3-5-2 system that they have used to a very good level in this tournament. They went with the same team that beat Sweden in the dying minutes of extra time to book a quarter-final place. 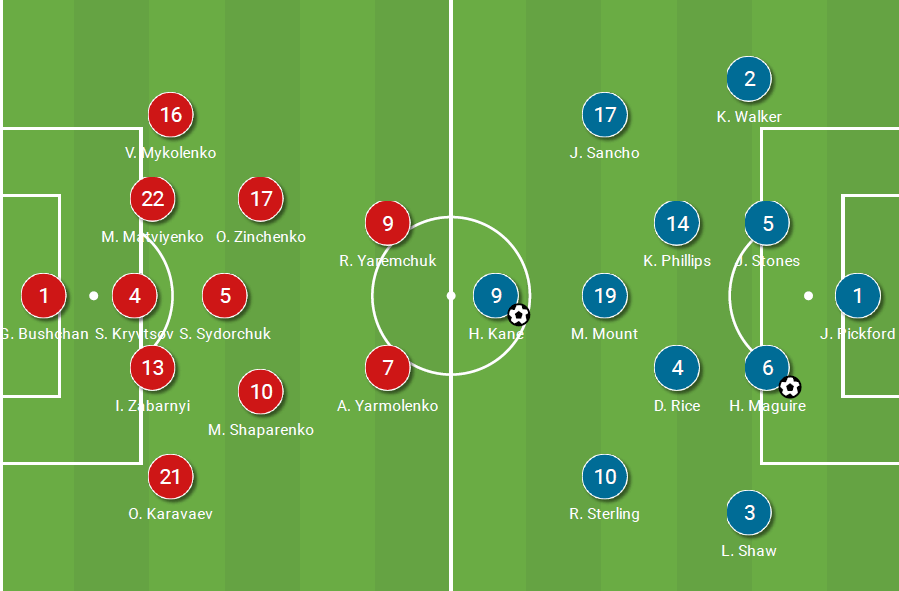 England, on the other hand, shifted into a 4-2-3-1 system as the latest Manchester United signing Jadon Sancho replaced Arsenal youngster Bukayo Saka, who was out injured and Keiran Trippier was replaced by Chelsea’s Mason Mount.

Ukraine have been one of the most structured teams in the tournament. They have had games where opponents have struggled to penetrate them, especially through the central regions owing to their well-executed mid-low block. Apart from their opening game against the Netherlands, they have not conceded more than a goal in any of their games in their road to the quarter-finals. As we already saw in the lineups, they lined up in a 3-5-2 system. We can see the structure in the image below. 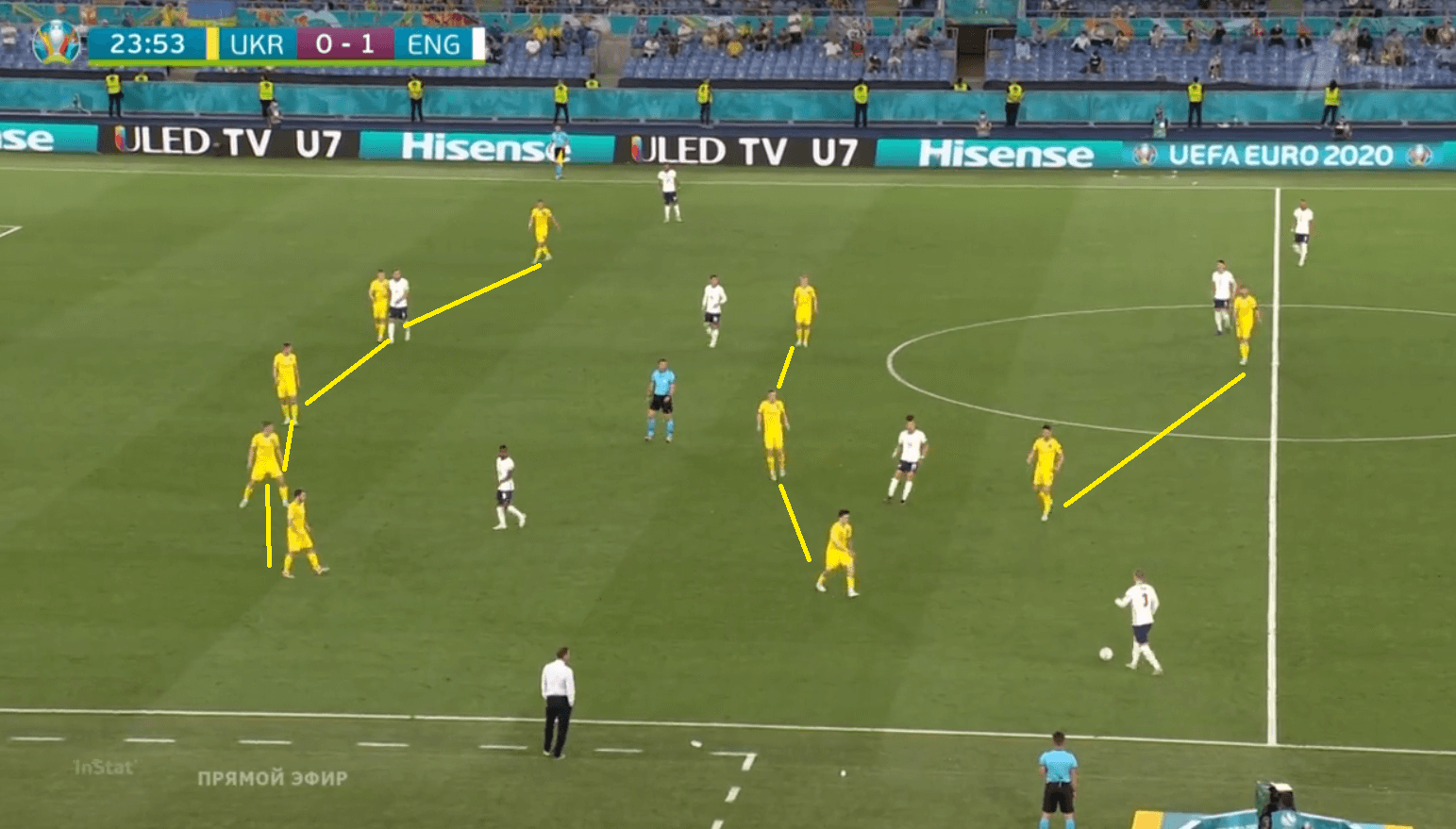 Generally, their win-back would not go out to press the English full-back as that would be taken care of by the central midfielder on that side. This is due to the additional midfielder in the three-midfielder system. When one of them went wide to press, the other two slid across to cover the spaces. This also meant that they had an additional midfielder to protect the central zones and lack of penetration was seen from England’s point of view. We can see in the image below where England cannot progress the ball centrally and mostly had to circulate the ball around to find a way. 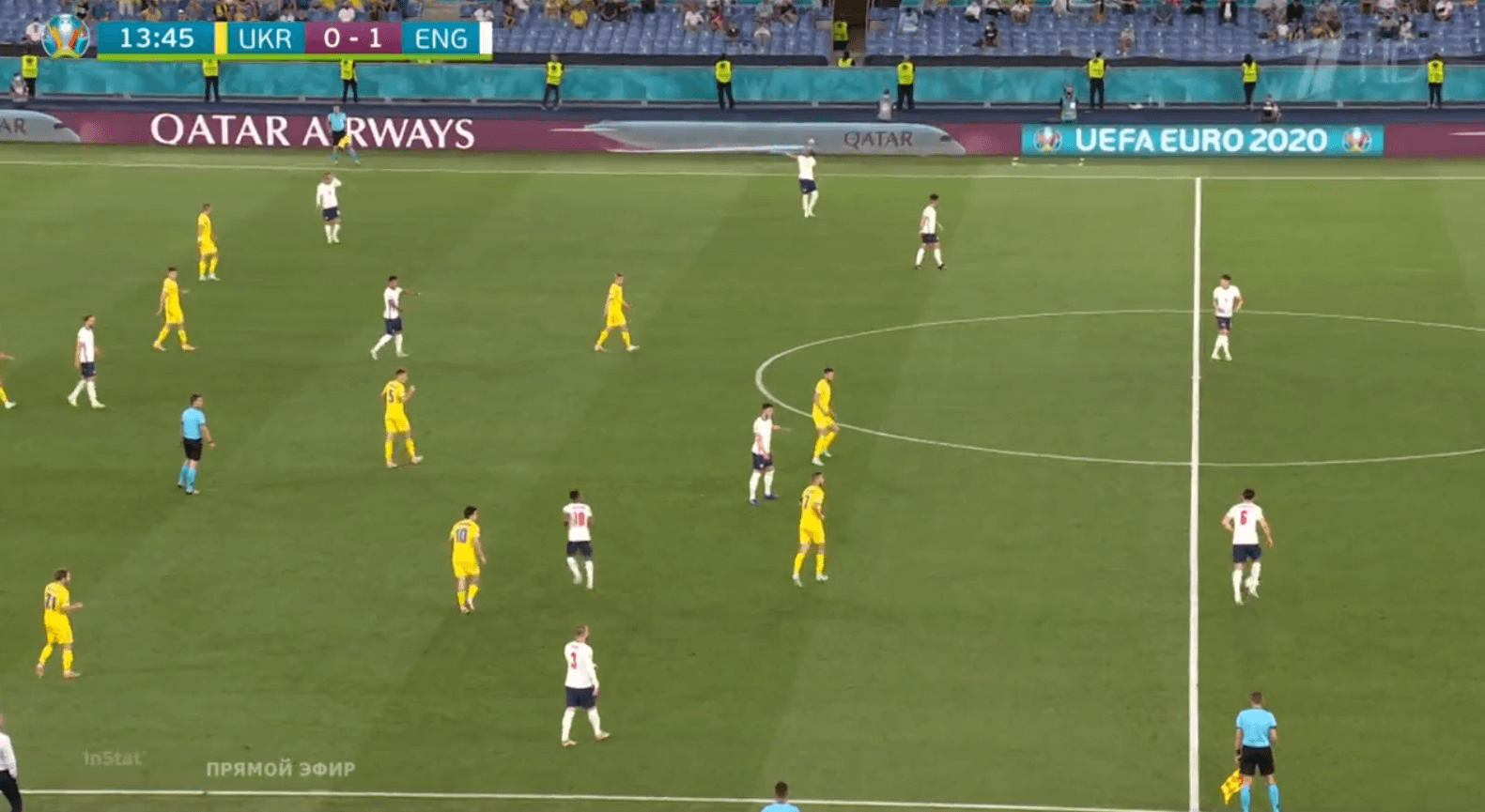 They mostly had to play around the back and through the wide regions to progress the ball forward. England later adapted well and made some small changes to ensure that they used these scenarios to their advantage. We can see an example of England playing around the Ukraine block when Maguire passes the ball to Shaw who then turns and plays a pass to Sterling. 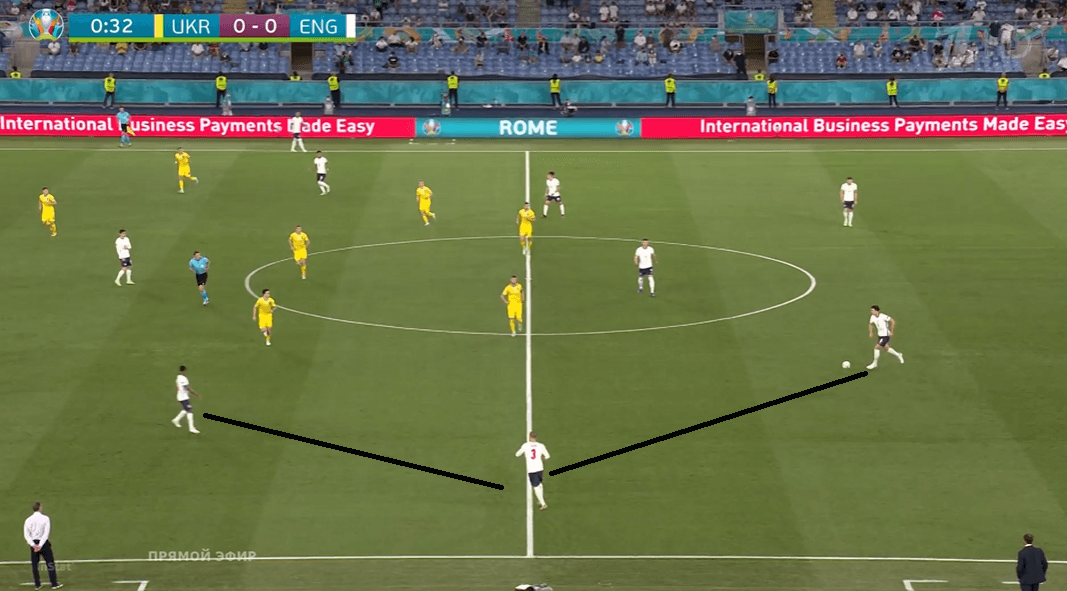 The zonal structure of Ukraine meant that they were exposed quite in the far flank where a wide player would be left free by them as they mostly looked to close the gaps in the ball-side regions. A switch was commonly expected to move the Ukraine defence side-side but England often failed to realise this and they failed to switch the ball soon. The likes of Maguire, Stones who are very good on the ball and have a very good passing range failed to attempt such passes. We can see that in the image below where Sancho is demanding the ball to be played to him but Maguire does not recognize it. There were one or two instances he did that but mostly England didn’t look to switch the ball which made it easier for Ukraine to concentrate on one side and defend well. 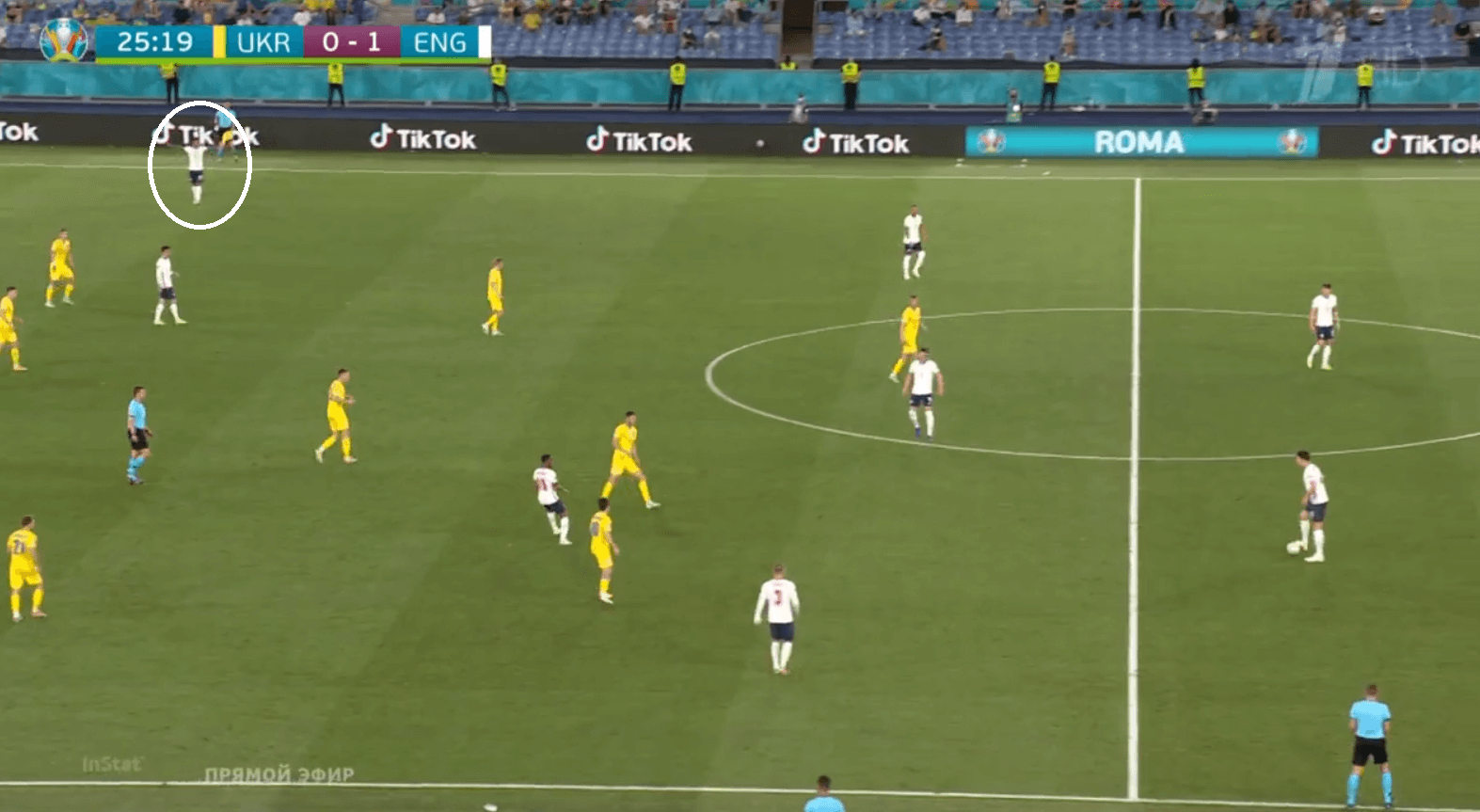 A common thing that England often looked to do is to invert Shaw with the winger moving wide. This meant that Shaw would be able to attack the channel in between the wing-back and CBs and could be used to play cutbacks inside the box. We can see an example of that in the image below where Sterling has moved wide and has dragged the wing-back with him. Now Shaw has moved inward and he has taken the attention of the wide CB. But the issue here for England is they couldn’t place a runner here to exploit the spaces and receive the ball in higher areas. 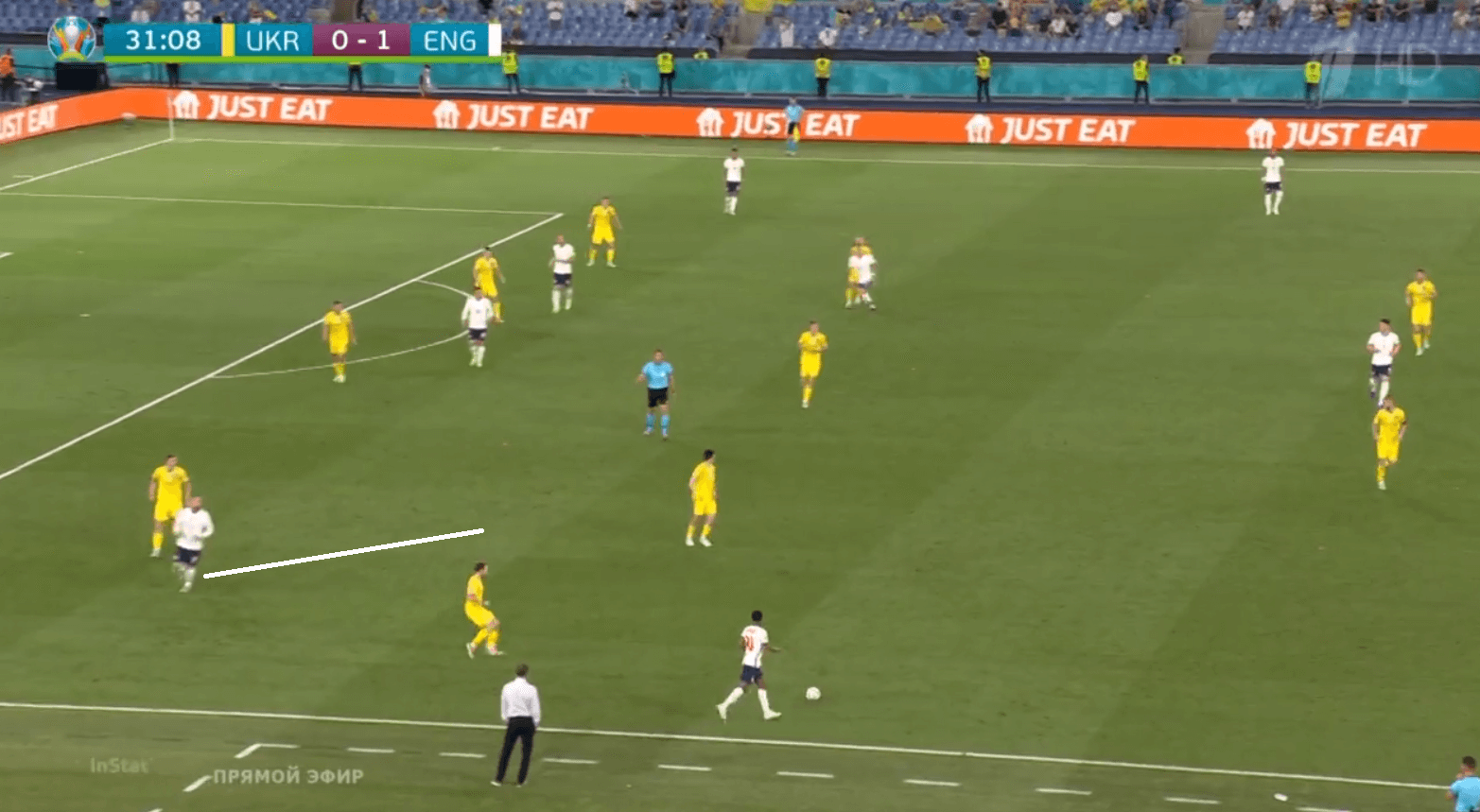 England’s adjustments win them the game

With the two forwards not pressing very high as they wanted to stay a little deeper and block the passing lanes to the central pivots from the CBs, England often shifted to a 3-1 shape where one of Phillips or Rice would drop into the defence. This meant that now they had a 3v2 advantage against the Ukraine front-line and one of the wide CBs having the ball can step forward and carry it. We can see Maguire carrying the ball and attracting the attention of one of the Ukraine midfielders. This means that either Shaw or Sterling are left free as a result of this. 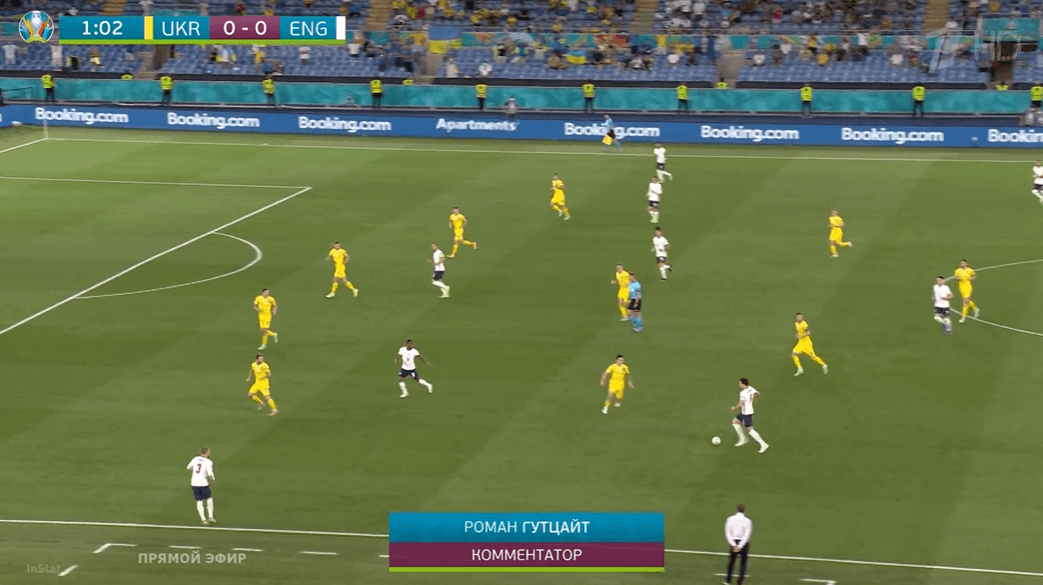 With England forced to use the wide regions as a result of Ukraine’s structure, they had to make some adjustments and deploy wide rotations among players to progress the ball forward. They formed triangles in these regions with the winger, full-back and one of the central midfielders combining with them. This can be seen in the image below where Sancho, Walker and Mount have formed triangles and are combining to progress with the ball. Mount would generally move to the wings and Sancho would swap by coming inside in one of these plays. 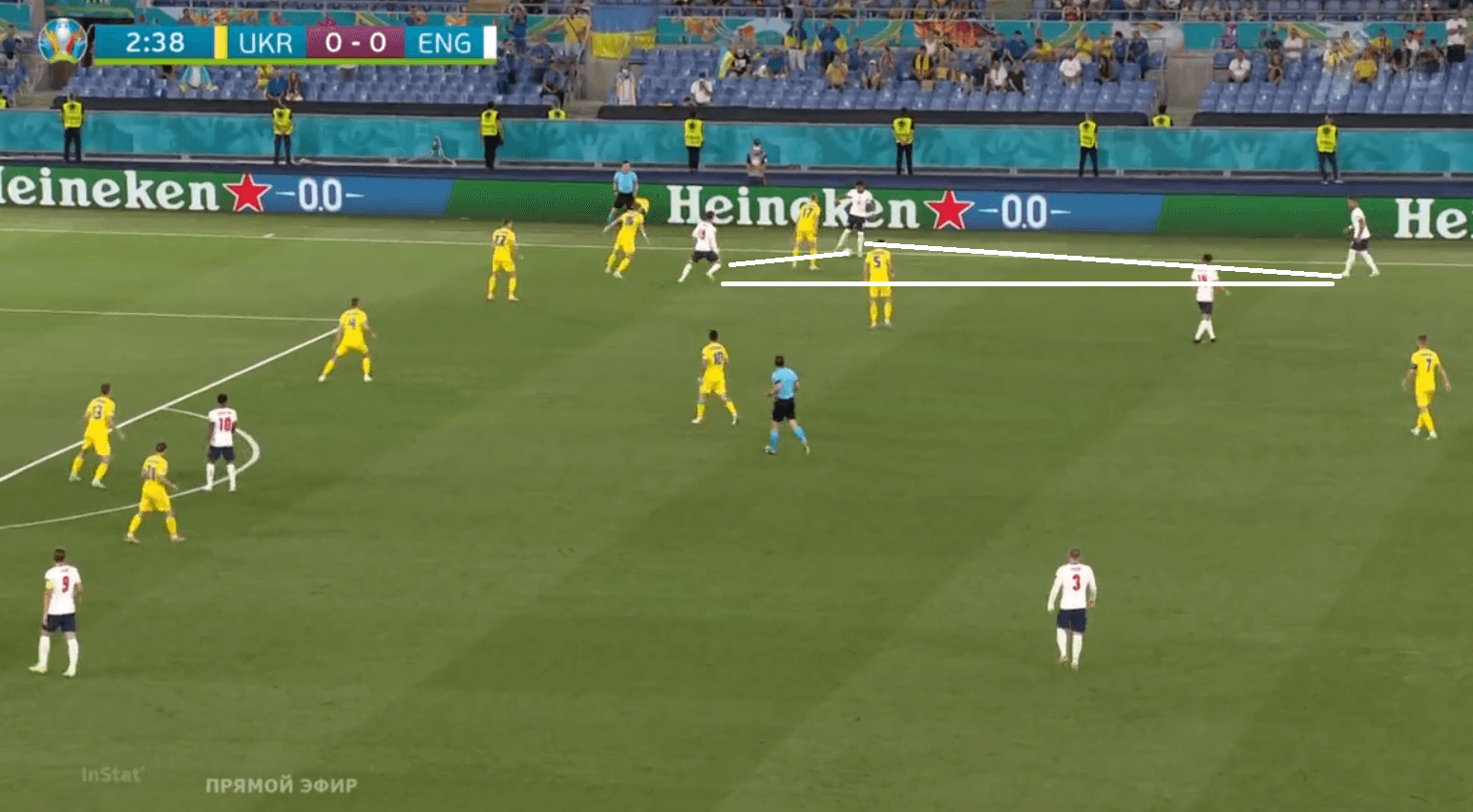 With Ukraine playing a five-man backline it was difficult to overload the backline with 5 players, but with England using a 3-1 shape, they were able to commit an additional player like Walker to it and form a 3-1-6 system. Walker would often function as an auxiliary wide player as he would take turns to push higher or stay deep to ensure that the counter-attacks are stopped immediately. 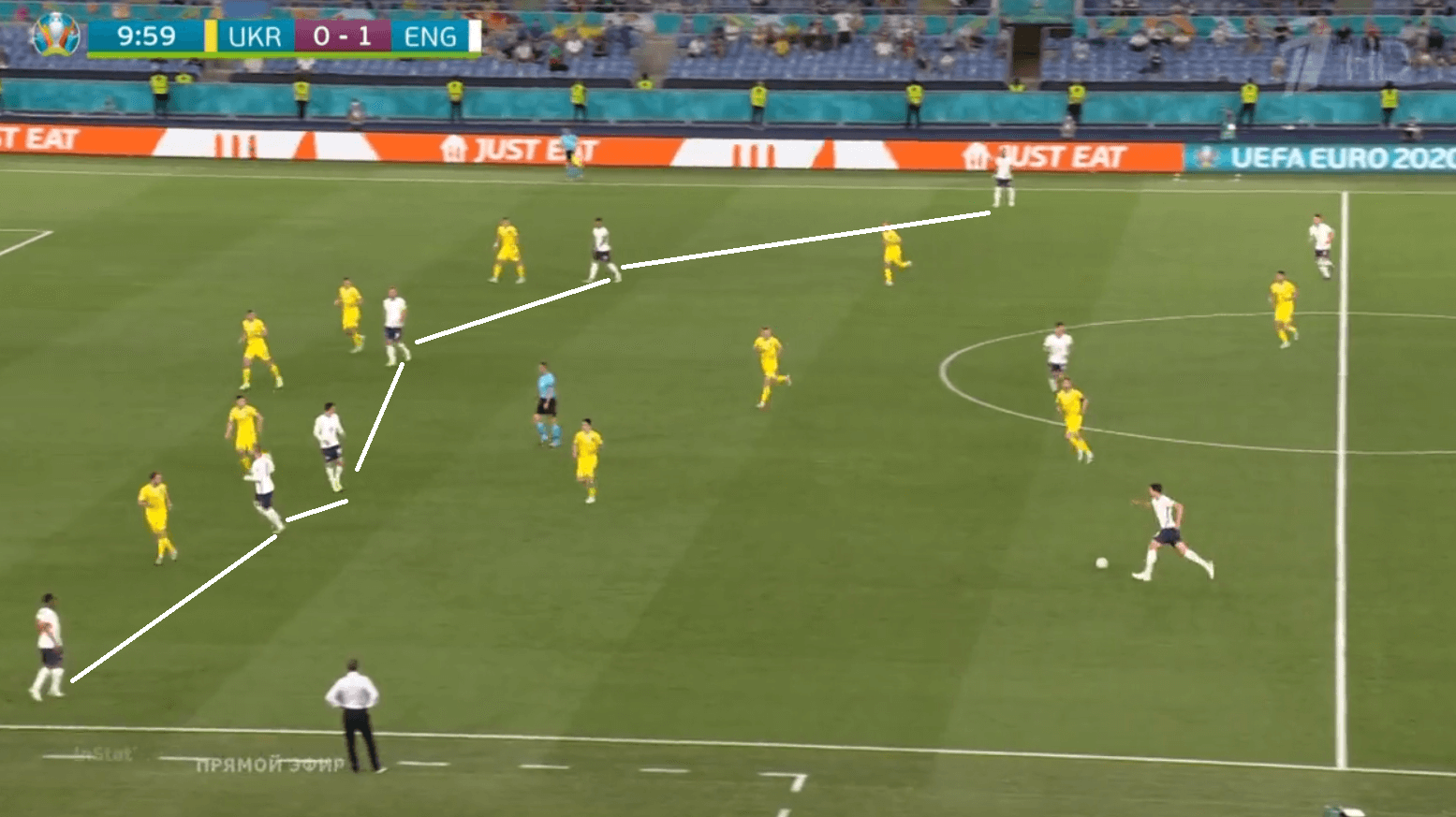 Despite the scoreline suggesting a thrashing from the hands of England, the reality wasn’t exactly the same. Ukraine were pretty difficult to break down, bearing set-pieces and few open-play situations. With possession too they were threatening and did get into the England box quite a few times. Before looking into them let’s look into how England set up without possession. They mostly pressed in a 4-2-3-1 higher up the pitch with Kane pressing the central centre-back while having the CDM in his shadow. The wingers would press the wide centre-backs but they wouldn’t necessarily be close to them unless the ball is in their near flank. This means that the deeper regions on the far side have an additional cover from one of the far-side wingers as he waits for the ball to go to his nearest CB to press. We can see that in the image below. 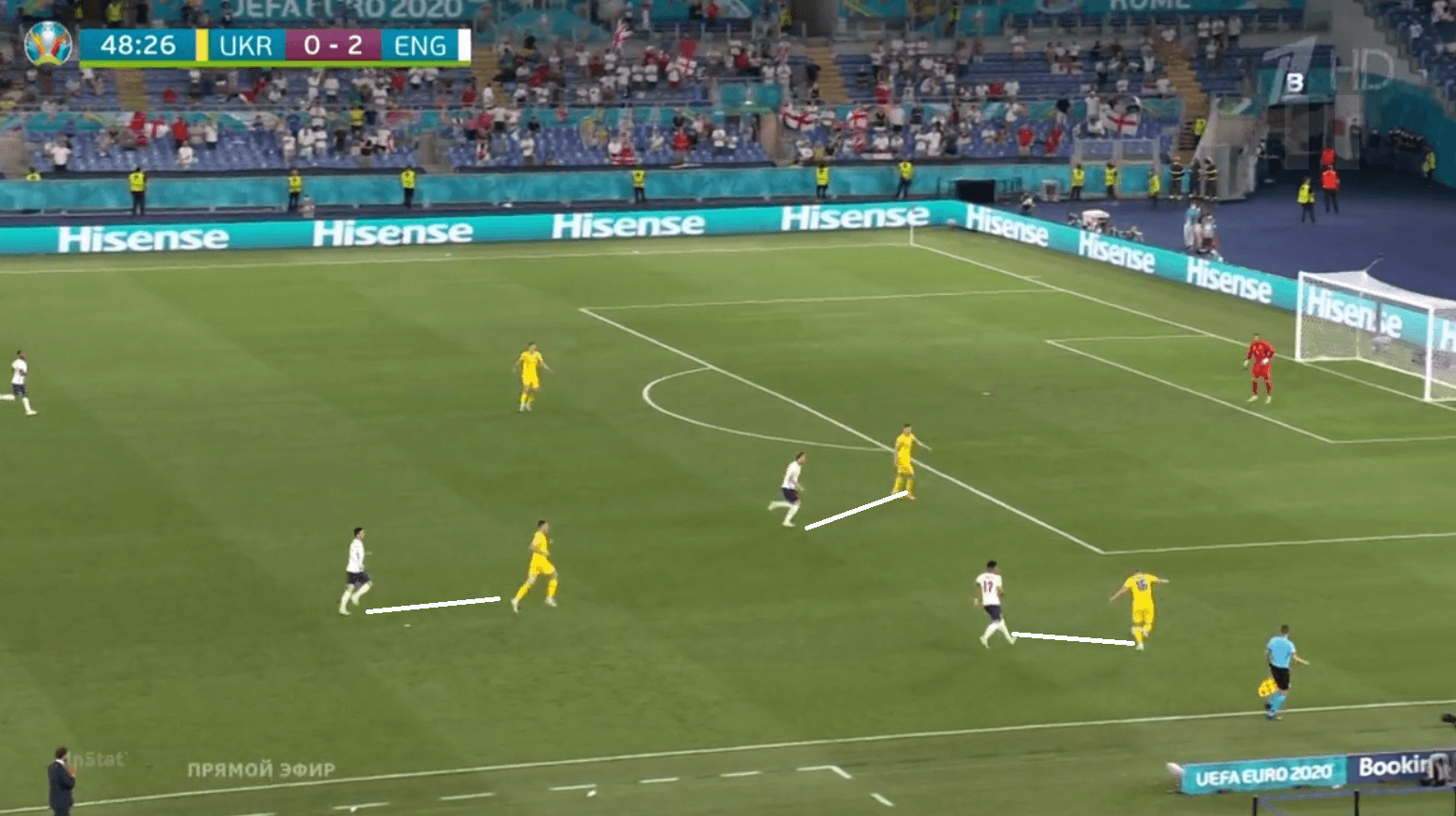 In a mid-block, England were oriented in a 4-4-2 shape with Mount joining Kane in the front line. The primary focus was to stop central progression and also since Ukraine already had a 3v3 advantage in the central midfield, the forward line was tasked with closing the gaps and passing lanes well. An example of that can be seen in the image below. 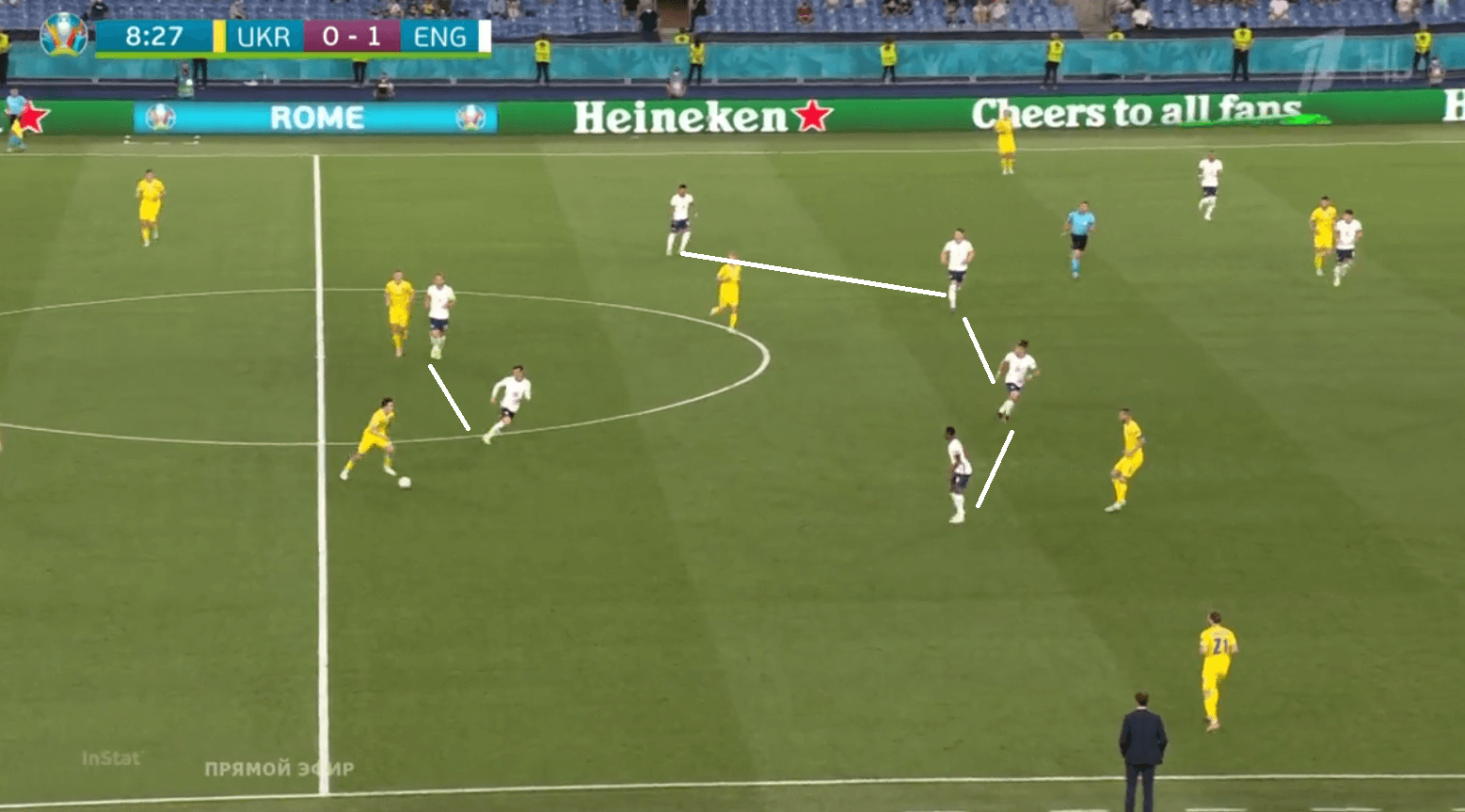 One of the common issues that England could have faced was when the full-backs stepped up to press their wing-backs. This meant that the space behind the full-backs was left free to exploit. But Ukraine often didn’t make runs to exploit or didn’t facilitate the next step well. In the example below, we can see Shaw stepping out to press the wing-back. But none of the Ukraine players have made that run into those spaces as they could have exposed Maguire ( his lack of pace) in these situations. 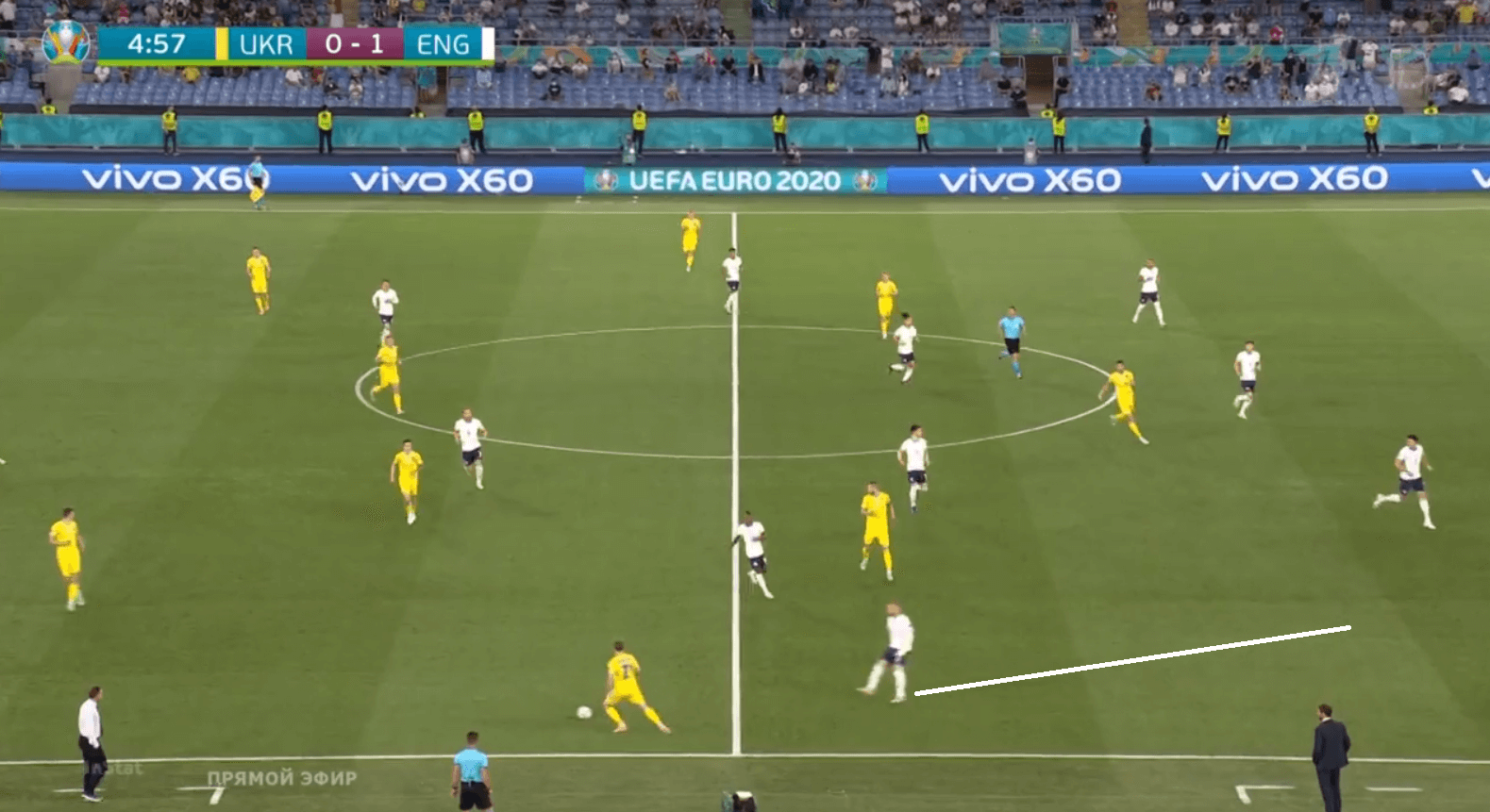 In another example, we can see a player making a run this time but the wing-back who received the ball does not receive with a good body angle as his angle closes his ability to play it over the top of the full-back who has stepped forward to press.

England’s superior quality and tactical adjustments meant that they convincingly booked the final semi-finals berth to play against Denmark at Wembley. The winner will be looking to play the final at the same venue against either Italy or 2012 Euro Champions Spain