Championship 2021/22: Reading upset Fulham in their own backyard with clinical finishing – tactical analysis

The 8th game week of the 2021-22 EFL Championship saw league-leaders Fulham host Reading at Craven Cottage. After getting relegated from the Premier League and losing quite a bunch of talented players to Premier League and Serie A sides, Fulham have started the season well and look like one of the early contenders to gain second promotion to the top-flight in three seasons.

On the other hand, Reading after a good 2020-21 season, have started in the exact opposite fashion to their opponents having suffered four losses in their opening six games. Having notched up a win last weekend against newcomers Peterborough, Reading would be looking to build and get their season back on a more consistent basis.

This tactical analysis discusses the tactics deployed by both the managers and how Reading produced a clinical performance to clinch three points against Fulham. Let’s begin the analysis.

Fulham made two changes to their lineup that beat Birmingham City in the mid-week. Robinson replaced Joe Bryan and Cavaleiro came into the lineup in place of Harrison Reed as Fulham went with a 4-2-3-1 system and Seri being pushed back into the deeper midfield. 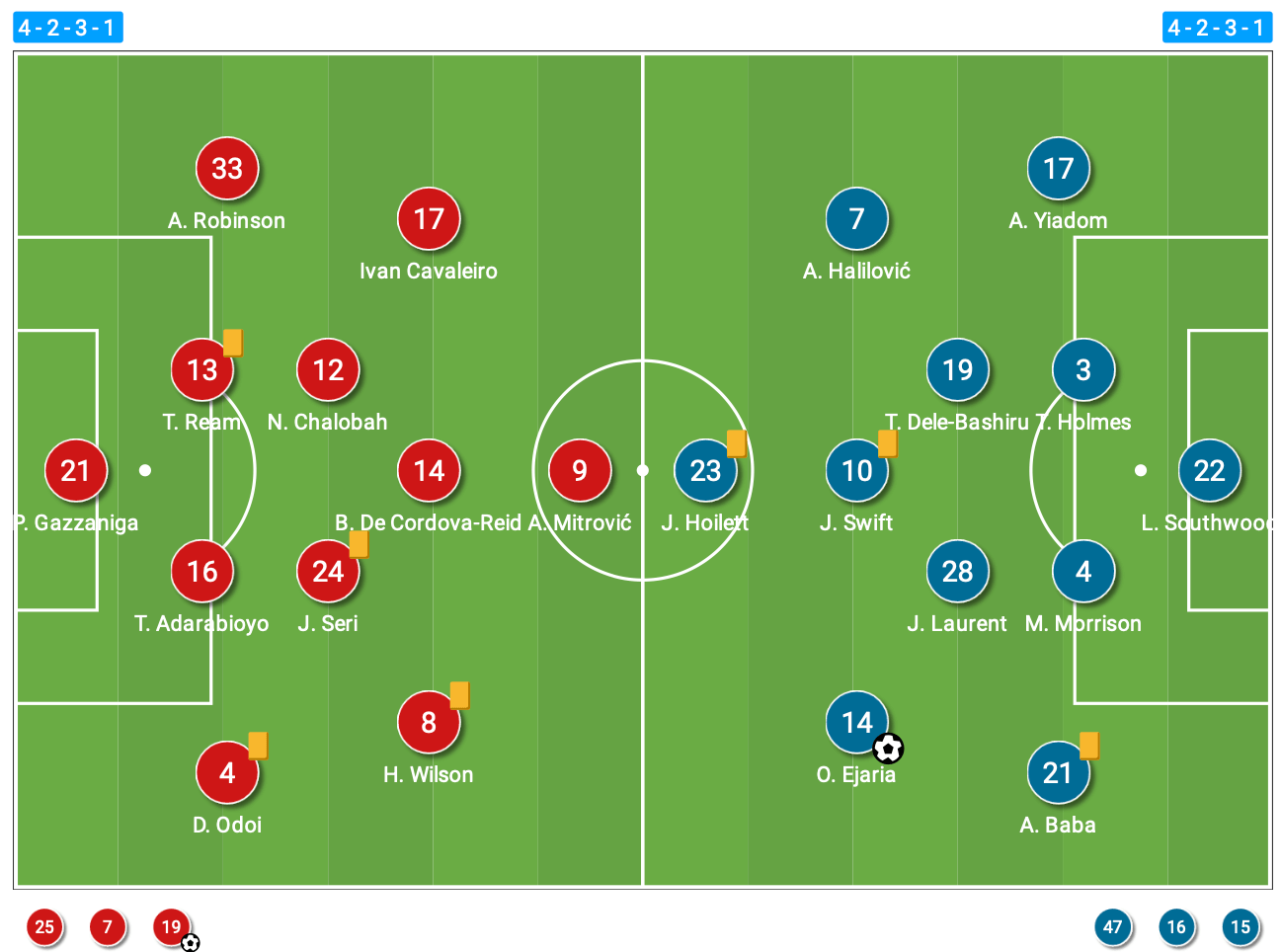 Reading, on the other hand, made two changes to their lineup as Hoilett made way into the lineup and Holmes replaced Liam Moore.

Fulham’s struggles with their positional play

With a 4-2-3-1 system, Fulham’s play under Marco Silva has been mostly playing down the wings and working their way through into the final third by using combinations and then delivering crosses from the wings or cut-backs to the likes of Mitrovic inside the box. This was made very complex to execute against Reading as the Royals often clustered themselves in the ball-near flank to ensure Fulham do not have numerical superiority. We can see an example of that in the image below where Reading have over-crowded their left-flank, Fulham’s right, and ensured that the progression through that flank is not possible. Both the pivots are positioned pretty much into that flank as Reading went with a ball-sided pressing in these phases. 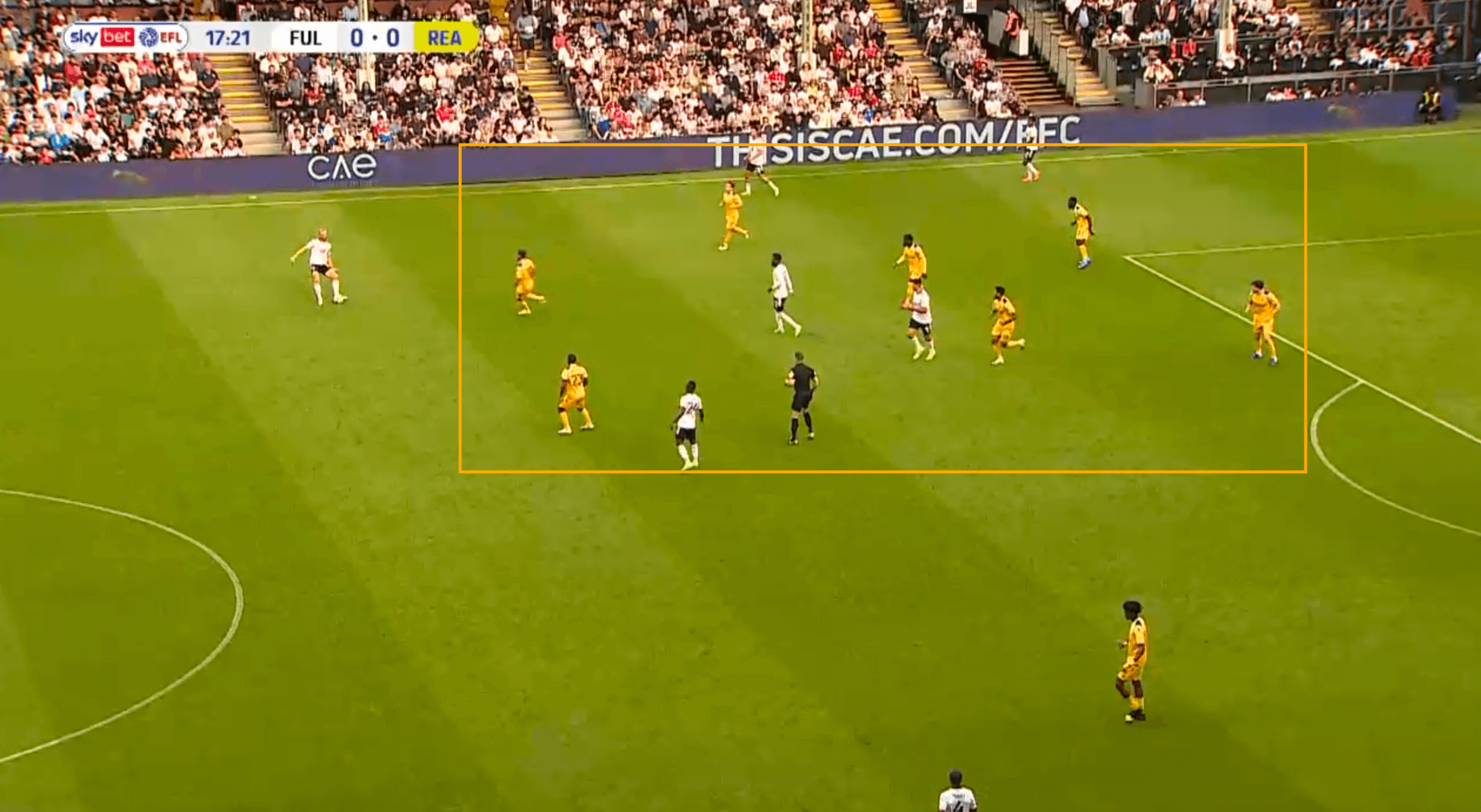 Though Reading did prioritize covering the central area to ensure that Fulham do not progress the ball centrally to the likes of Mitrovic or Reid by closely marking Seri (their deepest midfielder) with either Hoilett or Dele-Bashiru taking turns, depending on where the ball is at the pitch, to mark the midfielder out of the game. This means that the ball has to be played wide by the Fulham CBs and around the Reading block. 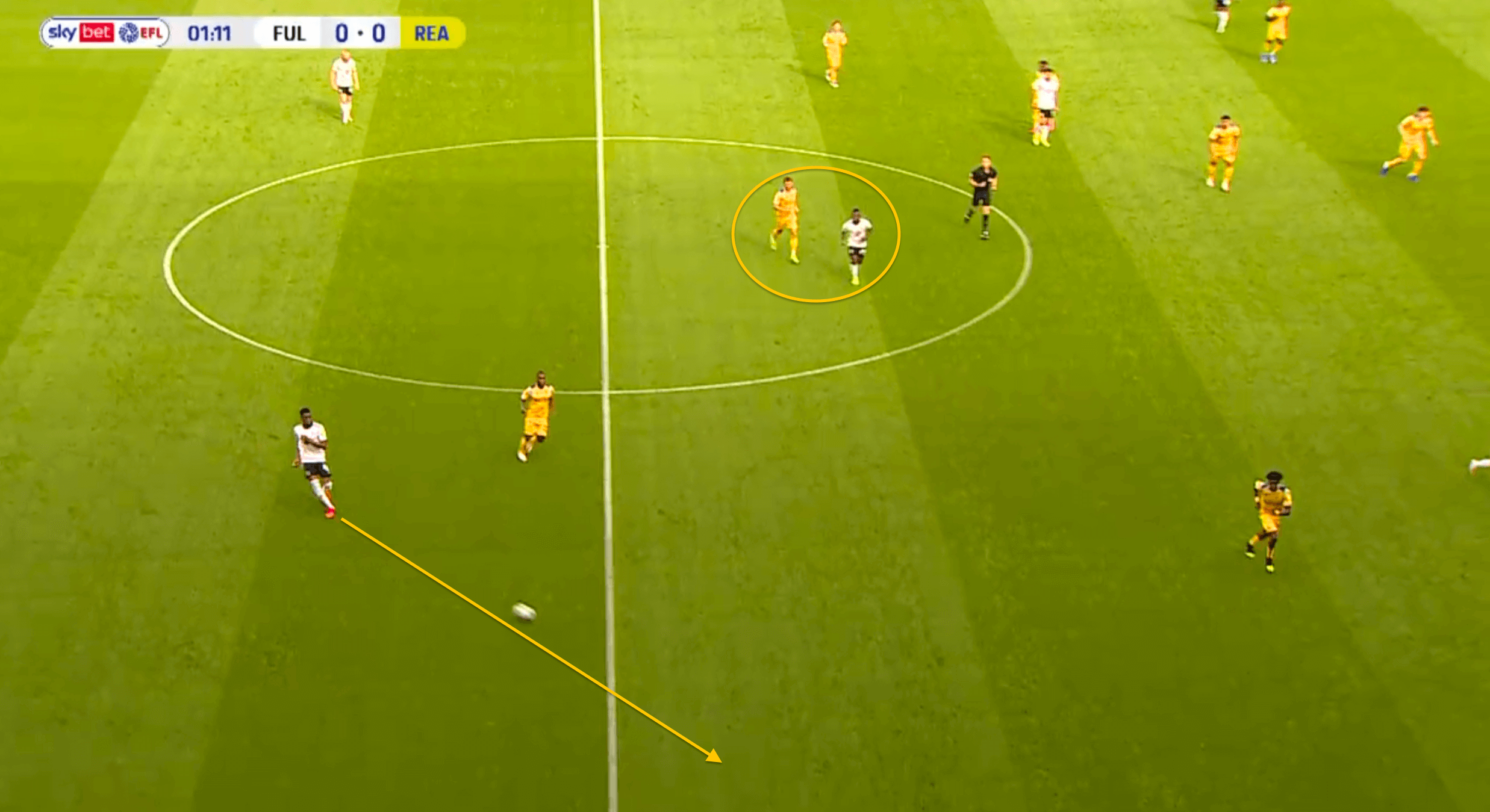 We can see Fulham trying to work out a combination in the wings by using rotations and overlaps to progress the ball forward. We see that they have a 3v3 situation in the image below but they couldn’t make good use of it as Reading tracked the players well and denied the progression. 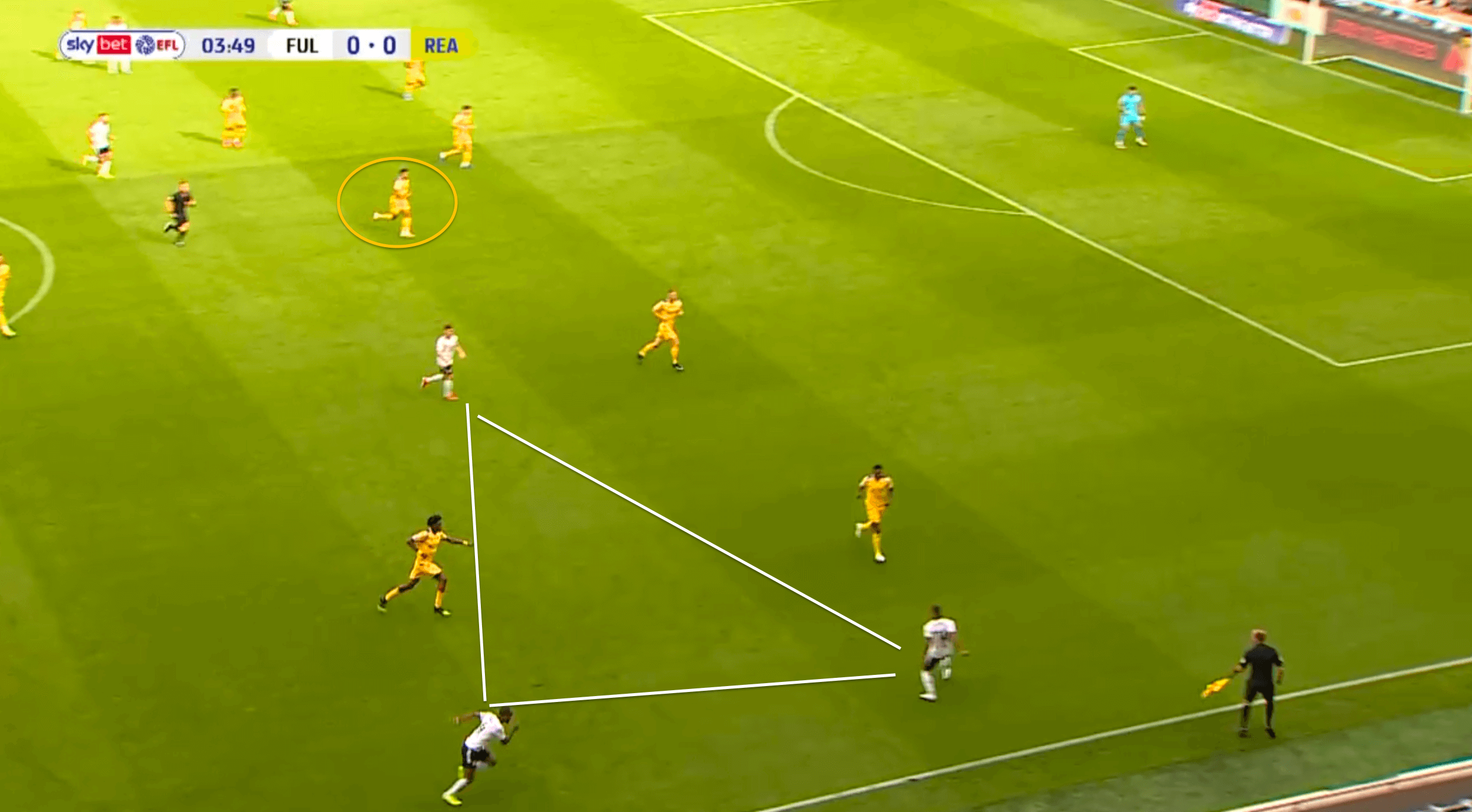 In some instances, Reading were very wary of their threat down the flank that they decided to cover shadow the wings while leaving the half-spaces free. The idea was that it could have stopped them from defending a lot of combinations whereas Fulham wasn’t that equipped to do the same thing when a player received the ball in the half-space. We can see the ball-near winger’s body orientation covering the flanks while the passing lane to Reid in the half-space is open. This is an unusual tactic as half-spaces are much more valuable than the wide regions to teams in possession, though was a bold one and did impact Fulham. 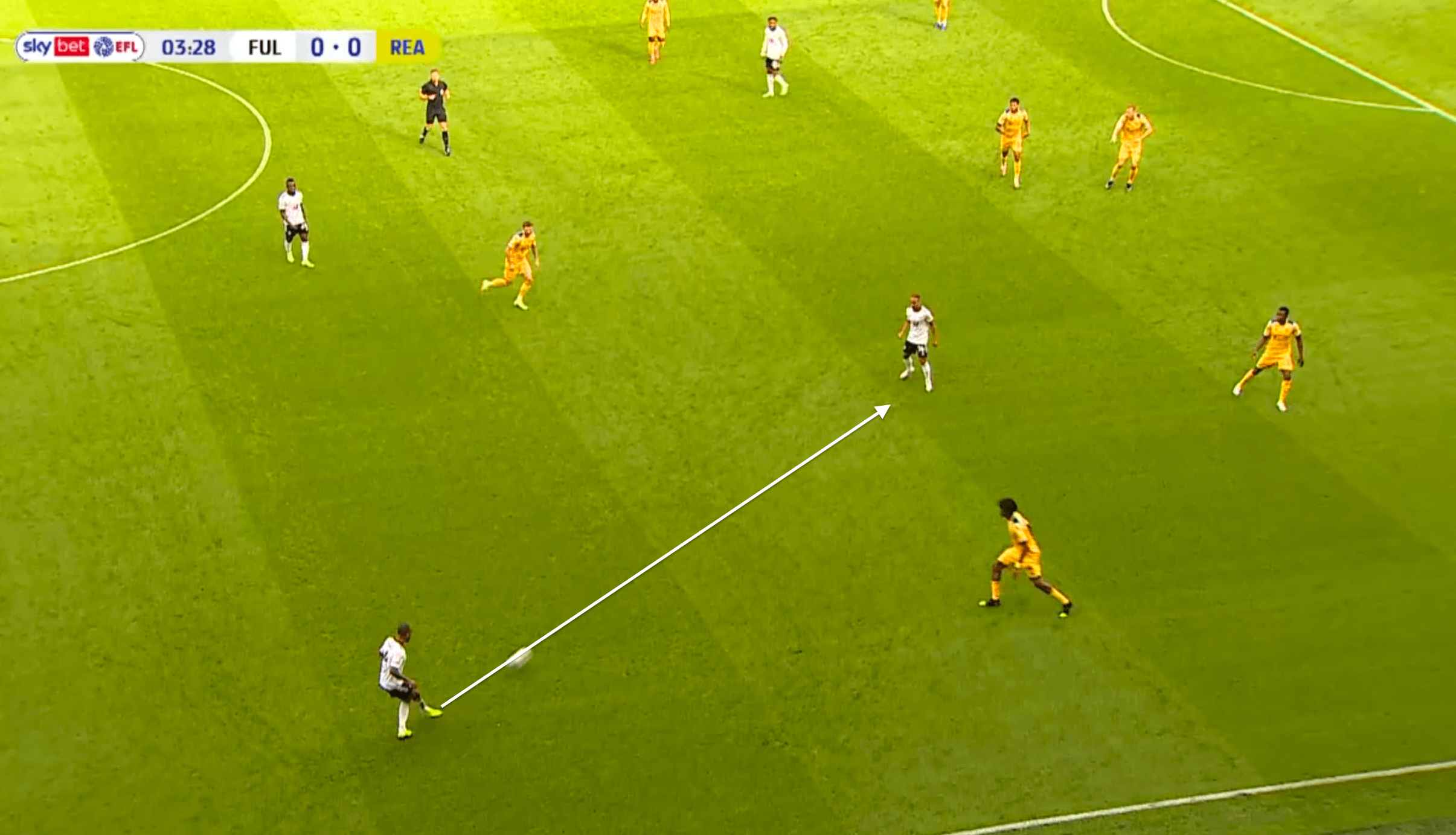 Another issue for Fulham was their staggering in different lines of the pitch. Their lines were too flat often and sometimes the same zones were being occupied by the same players making a lot of things redundant.  We can see that in the image below where the entire defence is very much focussed on the central regions as the Fulham players have crowded the central areas although not in the right angles or places. Also even if there is a player positioned wide, Fulham didn’t move the ball as quick as possible and most of their switches weren’t swift. 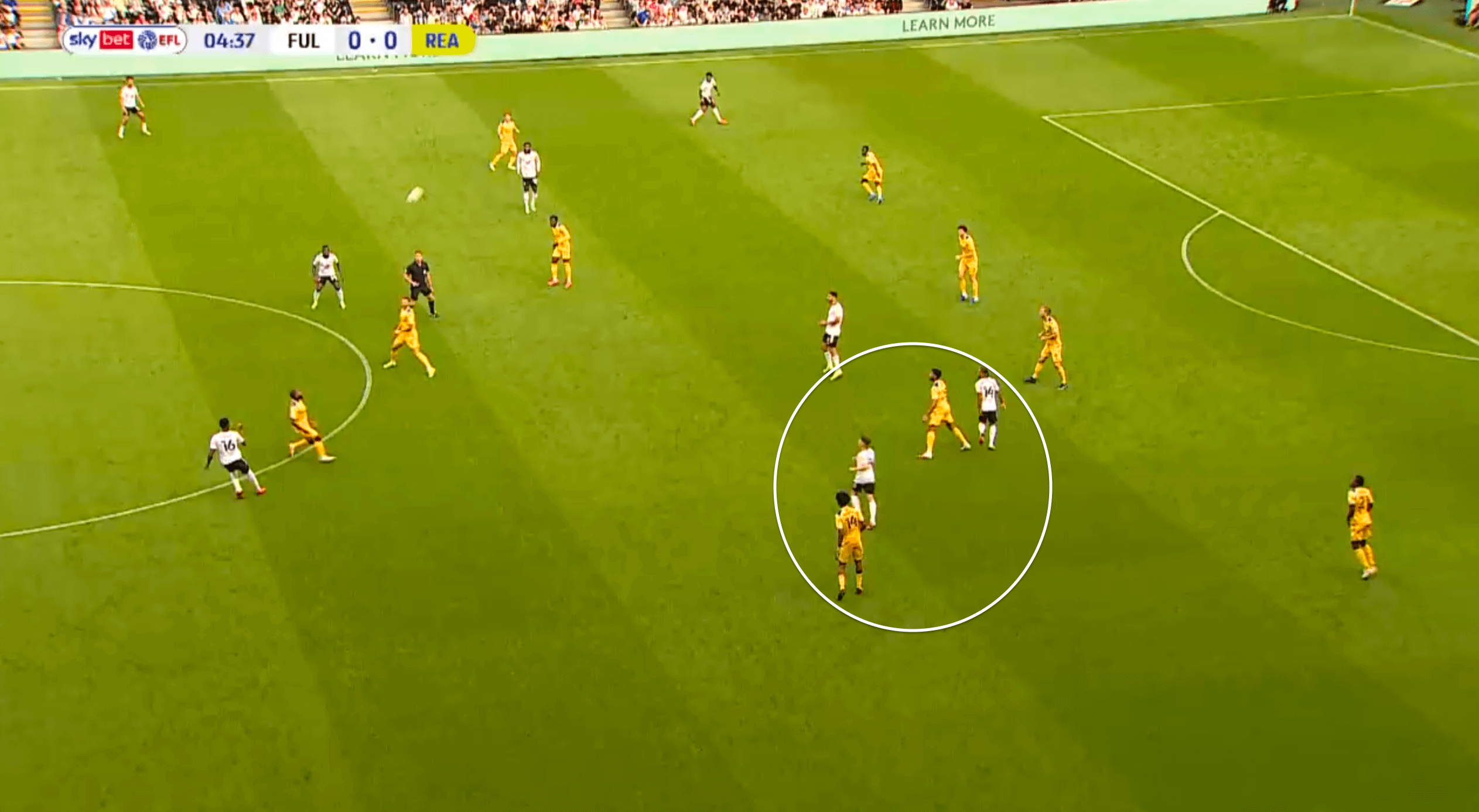 The key to unlocking any low-block and especially the ones that are compact is to stretch them as much as possible and find gaps in between the players horizontally and vertically. We can see Reading defend in the ball-side. A simple switch from one of the players to the opposite flanks could have opened opportunities for overloads on the opposite side but Fulham were a tad slow in moving the ball. 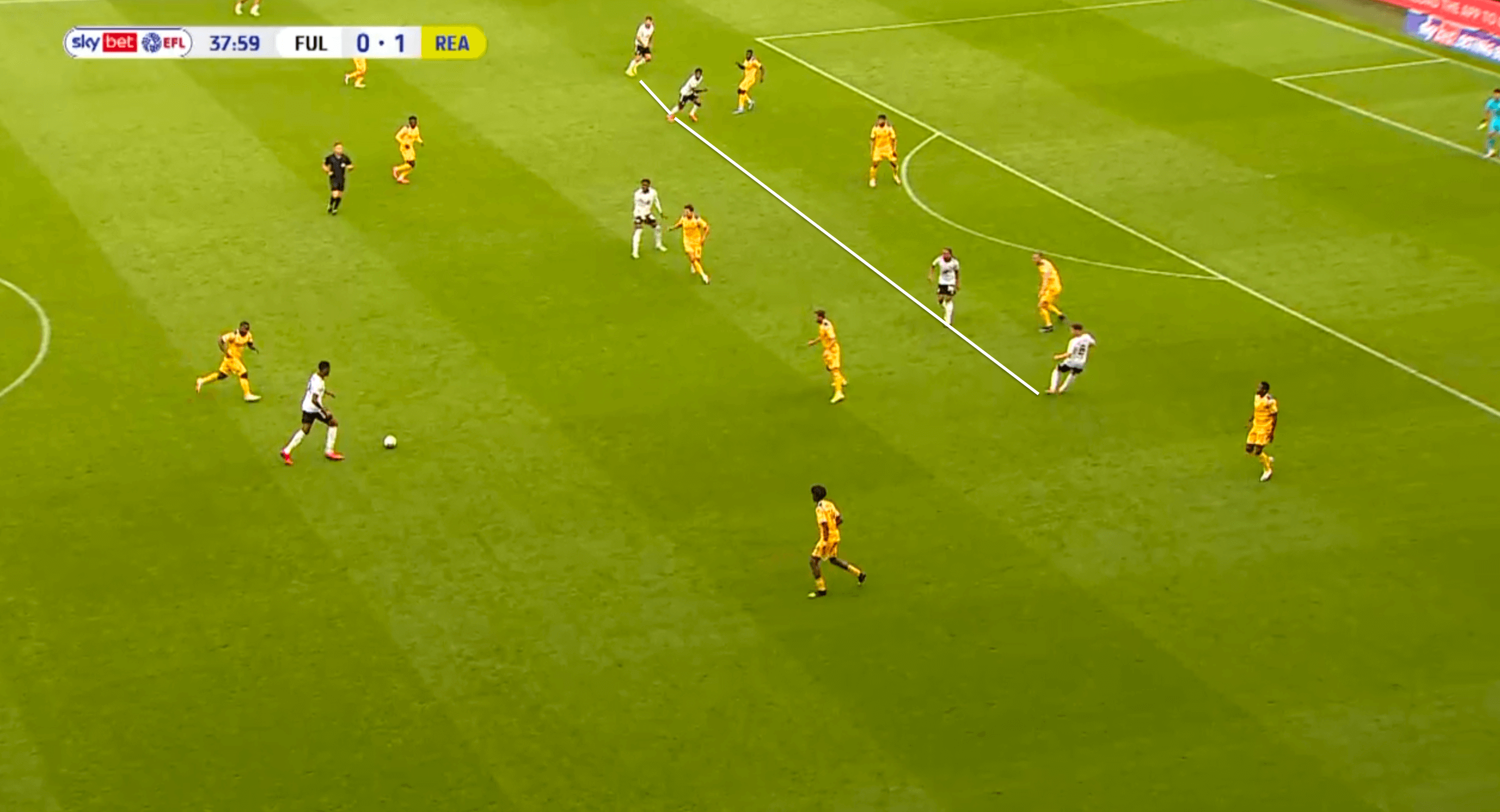 They would often position both their wide players in order to have a double-width, a tactic quite commonly used by the likes of Manchester City, Leeds United, etc. The key thing here is to drag the opponent to the flanks and use the half-space where players make runs into. But Reading were good in doing that as well and they were able to stop Fulham from progressing. 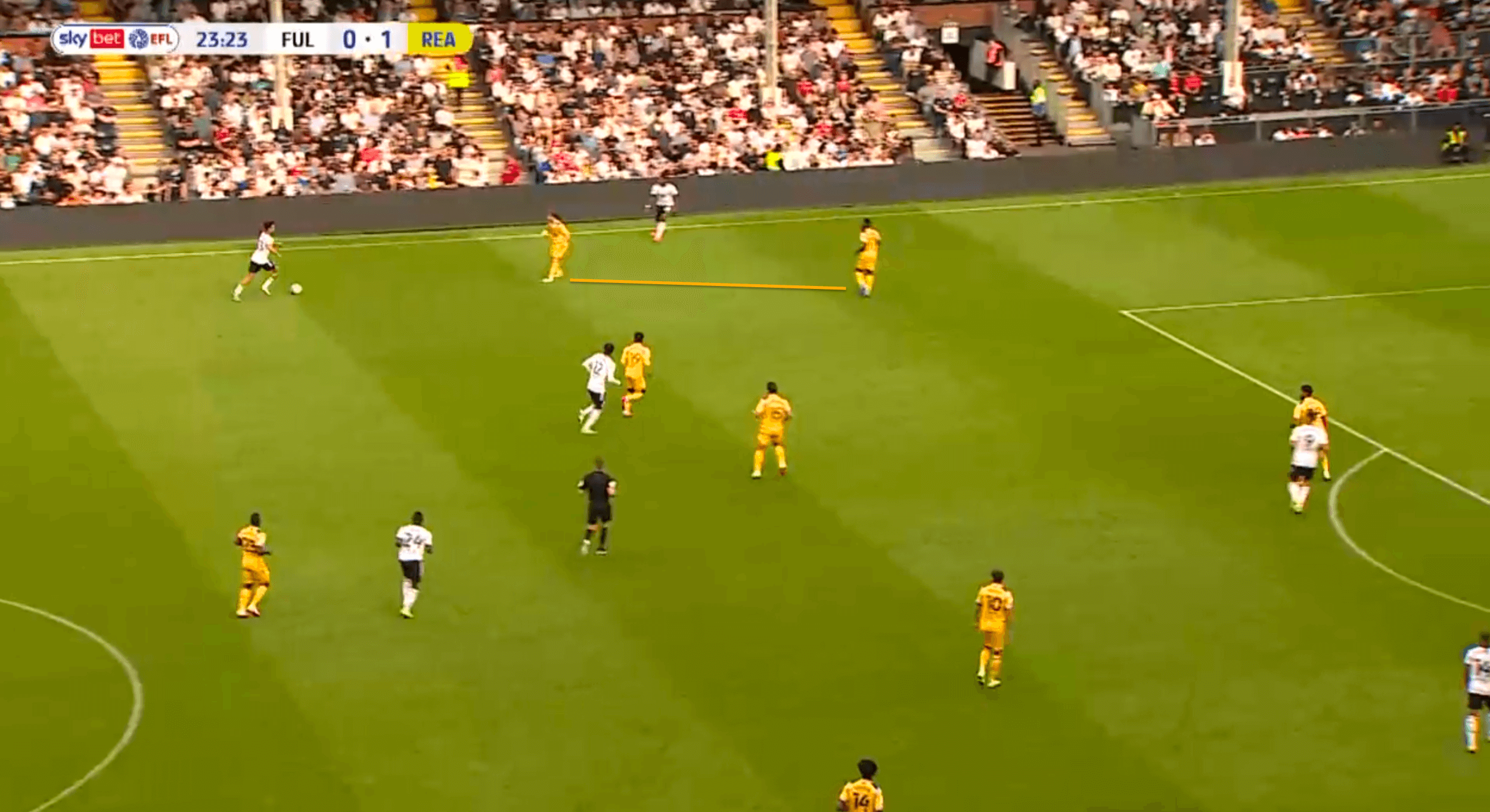 We can see another example of them positioning their players in the same zones. The thing about this is that it can be used well if the players are convenient in playing with different angles or disguises. Also, the use of double-width hampered the ability of Wilson as he mostly had to deal with overlaps in the wings which didn’t play to his strength on that side. Later in the second half, Silva decided to use him in the half-space which allowed him to be more effective and gave him the angles to work with properly. We can see him make a run in behind the defence from the half-space when there is another Fulham player out wide stretching the Reading backline. 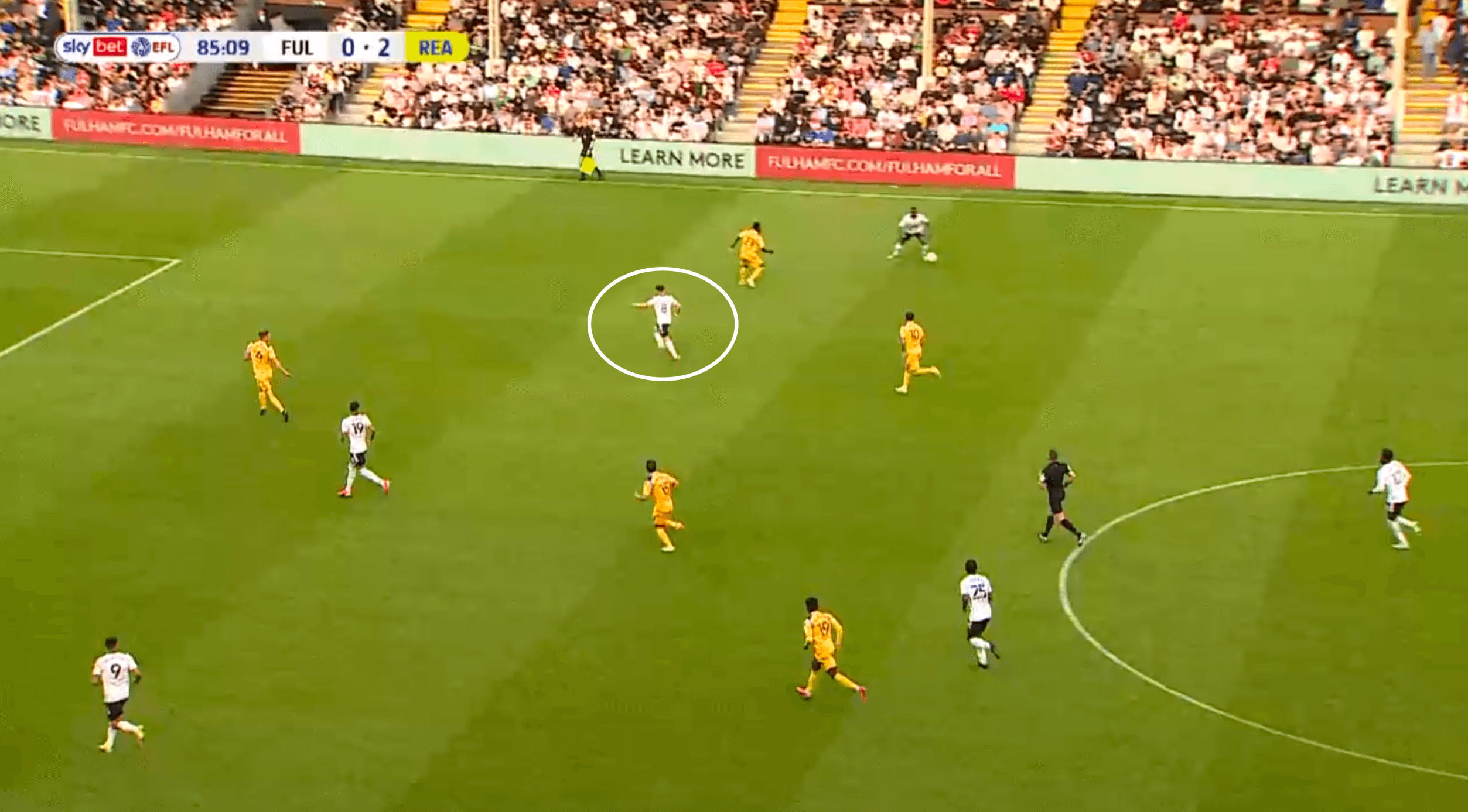 As the game grew and when Reading took the lead, Fulham’s desperation grew they started to commit a lot of men forward. At one stage they looked to stagger the final line with 6-7 players that had an impact on their rest defence. The 2-1-7 formation exposed a lot of spaces in between the lines. Whenever Reading won the ball back, they immediately looked to attack the spaces and exposed Fulham on the counter. We can see a lot of Reading players have positioned in between the two Fulham lines. This means that whenever they win the ball, Fulham were in danger of getting exposed. 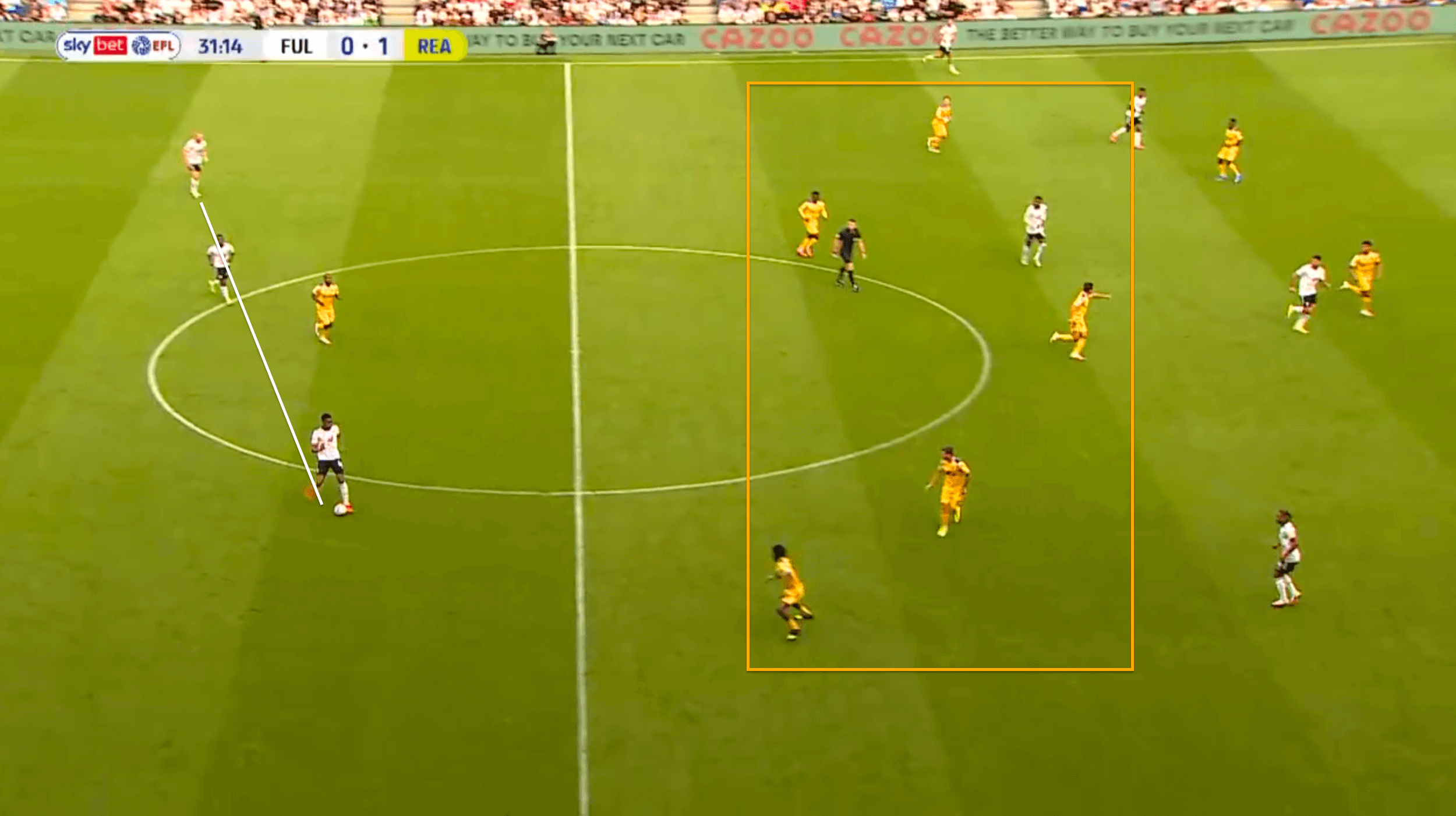 Both their goals came from counter-attacks and both of them were as a result of a lot of players being very high and a very poorly structured rest defence. We can see just before their second goal, they have a 3v2 situational advantage which they used well to punish their opponents and put the game to bed. 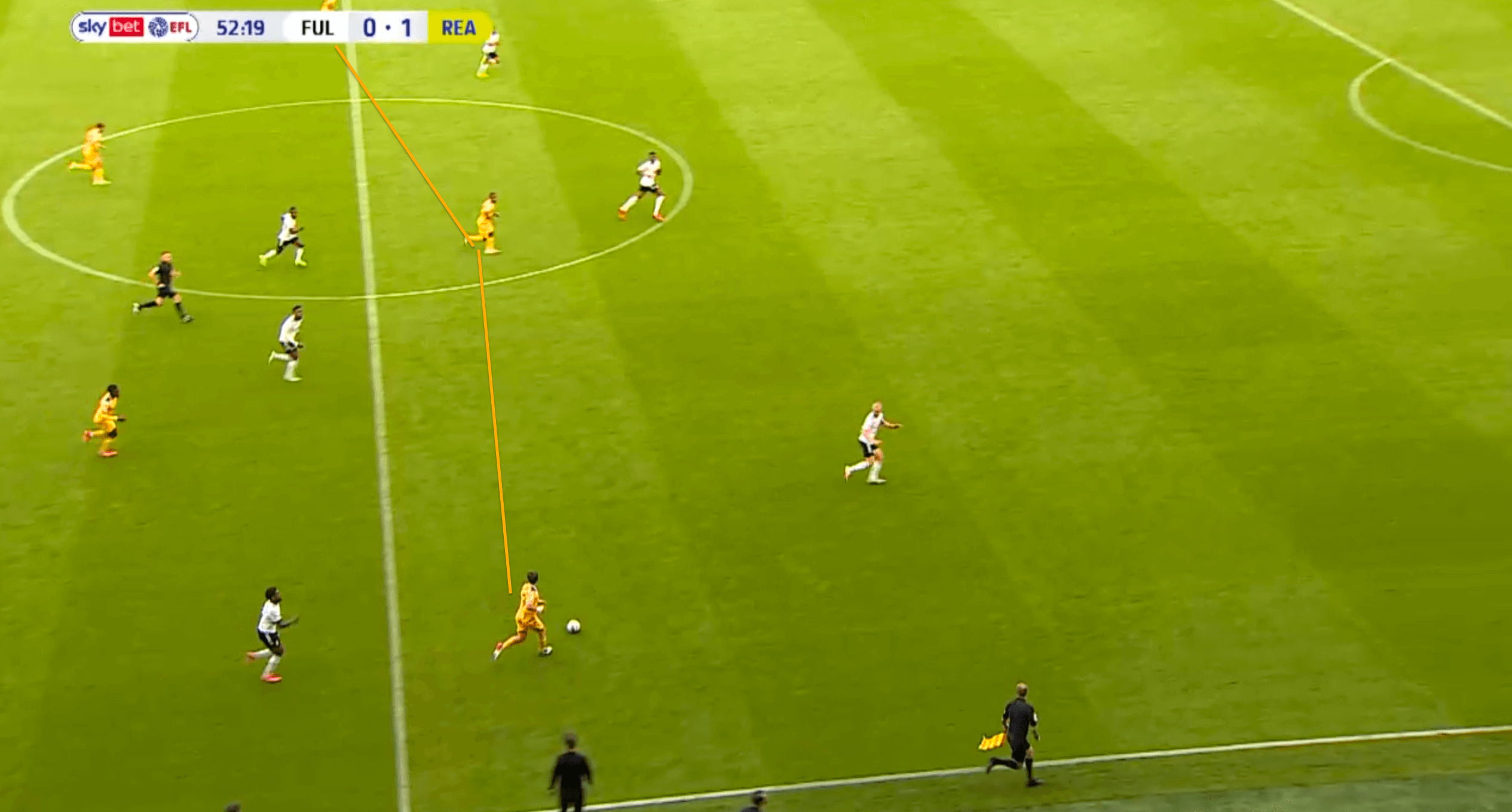 The drawback was with their principles they weren’t able to create feasible scenarios for their attackers to play them very high up the pitch and also giving Reading the opportunity to counter-attack in numbers.

With this loss, Fulham have now surrendered first place to Bournemouth with their second defeat in three games. Reading, meanwhile, have secured a second consecutive win after a difficult start to the season that saw them suffer four losses in six games. With the season having just started, it will be interesting to see how the race to the top-two and playoffs for a Premier League promotion would pan out.