This post was initially featured on serieaanalysis.com our comprehensive analysis site, which covers players, matches and much more from Serie A.

Group B’s third round big match saw an Inter side on the back of a derby win take on Barcelona, first in La Liga after dispatching Sevilla in a 4-2 home victory. Both teams stood at 6 points, and a win would have guaranteed an almost certain qualification, given Tottenham’s draw against PSV. Plagued by injuries, with Messi and Umtiti missing for Barça, and Nainggolan out for the visitors, the two sides had some key absences and had to adapt accordingly. Rafinha and Lenglet respectively replaced Messi and Umtiti in the starting eleven, whereas Borja Valero took Nainggolan’s place.

Barcelona resembled a 4-3-3 shape in possession, with Coutinho and Rafinha in the half-spaces and Jordi Alba and Sergi Roberto providing width, and depth through their overlapping runs. The Spanish full-backs overlapped to create access to the wingers, by pinning Asamoah and D’Ambrosio and allowing them to drop and receive between the lines. In addition, with the full-backs slightly deeper, the wingers’ occupation of the half-spaces invited the full-back inside, opening a passing lane into deep areas.

Rafinha’s positioning in the half-space invites Asamoah to step out and opens a passing lane towards Sergi Roberto.

In deep build-up, the home side circulated the ball and progressed up the field through excellent passing sequences between Busquets and Arthur, the deepest midfielders, forming a double pivot in which the two were diagonally staggered (even though they both moved constantly to make themselves available and give the opponent the least points of reference as possible) to create passing triangles with the centre-backs and occupy the field more efficiently. The third midfielder, Rakitic, weighed his movements depending on Sergi Roberto’s position. When the latter was deep, he pushed high, drawing Brozovic with him and opening potential diagonal passing lanes towards Suarez. Moreover, the Croatian provided the necessary runs into deep areas to stretch Inter’s lines. Conversely, when the full-back pushed up himself, Rakitic stayed slightly deeper in the half-space to maintain a stable structure and control over counterattacks.

During positional attacking, Suarez often dropped between the lines or drifted wide to play lay-offs or support the ball carrier; in order to allow the Uruguayan to be free from markers and thus occupy a player on Inter’s second line, consequently freeing a midfielder, Rafinha occupied the #9 space while Roberto stayed high and wide. Barça’s first goal is a good example of one of these situations, as Suarez drifted wide and Rafinha cut inside to counterbalance the former’s movement.

Through his vertical dropping movements, Suarez could also make himself free and subsequently attack the box unmarked, as Rafinha pinned both central defenders and the midfielders were reluctant to follow the former’s runs. 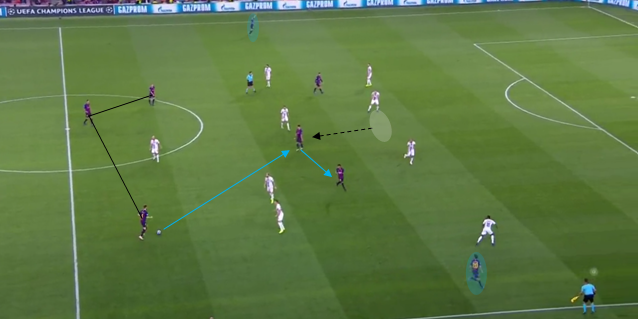 This positional fluidity created various holes in Inter’s structure and allowed Barcelona to manipulate the opposition players by drawing them out of their position and occupy it immediately after to create positional advantages. Furthermore, the home side were able to control possession through the numerous passing triangles created across the pitch to retain possession in tight spaces, aided by the lack of pressure and aggressiveness from the visitors.

Off the ball, Valverde’s team pressed in man-oriented zonal marking style, shifting rather aggressively to the ball-side and congesting spaces to force Inter into long balls or difficult passes to players under pressure. The effective pressing game allowed Barcelona to control the game and the 73% possession in the first half is a testament to the home side’s dominance. The counter-pressing was particularly effective as well, as the lines in possession were close and Barcelona had good control of the centre through a strong and well-positioned defence.

Inter’s initial plan was to soak up Barcelona’s pressure in a 4-4-1-1 mid-block and counter-attack in numbers. However, this didn’t work and, even though the first half result might suggest otherwise, Inter weren’t particularly good at congesting space, and as a result, fell into the Blaugrana’s traps far too often.

Therefore, in the second half, Spalletti decided to take off an uninspired Candreva – who not only failed to have any sort of impact offensively, but also struggled at coping with Barça’s combinations on the left side – for Politano.

The former Sassuolo player’s introduction to the game added variation in crossing and 1v1 ability, as well as speed and aggressiveness in pressing, proving to be a successful substitution.

The start to the half saw Inter create some interesting situations, such as pulling one of the centre-backs out of position by accessing a midfielder in the half-space (creating the typical “half-space crisis” on who has to step out) and subsequently attacking the vacated space with Borja Valero. Barcelona dealt with a central defender leaving his line particularly well, though, as Busquets dropped into the centre-back space. Inter also started high-pressing more aggressively, in their typical man-oriented fashion and were able to regain possession multiple times in dangerous areas.

However, Inter’s more aggressive approach did have some downsides, like the fact that the ball-side full-back was expected to step out on the closest player to him and this opened up channels towards either Suarez, who would drift to attack the free space, or the full-back/winger.

In the end, besides from gaining a brief situational advantage or being able to take a couple of shots from dangerous areas, these plays led to nothing concrete, and eventually, Inter’s momentum wore off as Barça regained control through their players’ technical quality and individual press-resistance; the high-pressing off the ball also forced Inter to play back to Handanovic first and long afterwards, as the goalkeeper was pressed. What must be highlighted is Suarez’s relentless work rate during pressing situations, especially in backwards pressing, allowing Barça to have constant pressure on the ball-carrier whenever in the Uruguayan’s vicinity.

Inter were able to somewhat come back into the game at the start of the second half, however, Barcelona’s quality proved to be too much for Spalletti’s side as the Catalans won their third game out of three in their group. For the second game in a row, Inter showed on the one hand, what good of a pressing side they can be, on the other hand, how little solutions they have in the final third as to the final ball, and, most importantly, how big of a gap there is to bridge with the best teams in the world.