With Leipzig looking to make a challenge for the title this year, this fixture was an excellent chance to show whether this is a realistic goal. Frankfurt finished seventh last season and managed a semi-final in the Europa League and would provide a tough challenge. Both of their games against Leipzig last season ended in stalemates.

This tactical analysis looks at how both sides approached the game and delves into the tactics used by both managers to counteract one another. 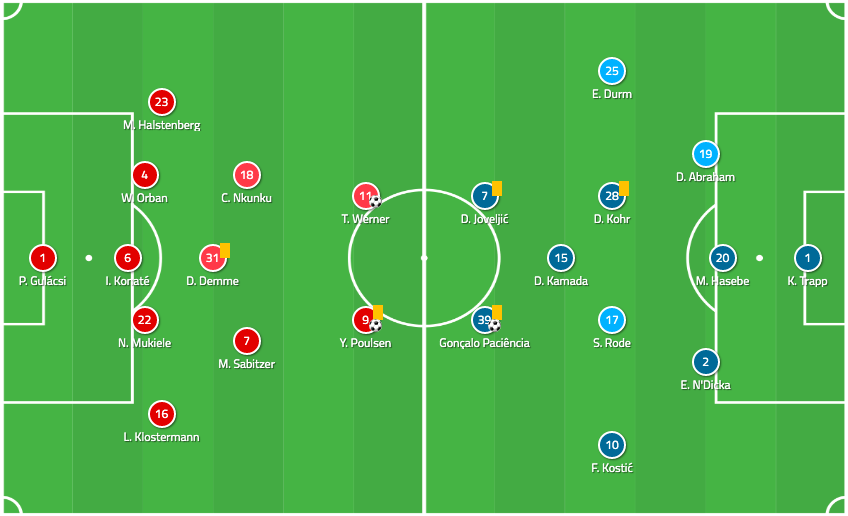 RB Leipzig fielded a 5-3-2, which changed to a 3-5-2 in attack. Both wing-backs Marcel Halsternbeg and Lukas Klostermann were expected to add width going forward, as they did the previous week.

Frankfurt lined up in a 3-4-1-2, with Ante Rebić notably omitted from the squad. He was substituted at half time in their 1-0 loss in the Europa League to Strasbourg during the week. He was publicly criticized by manager Adi Hütter following the defeat.

Leipzig went ahead in the tenth minute, courtesy of a strike from Timo Werner. The young German forward has been heavily linked with a move to Bayern Munich. But an hour before kick-off Leipzig announced he had signed a contract extension. He demonstrated his importance to the side with his second goal of the season. It came from a carefully crafted corner. 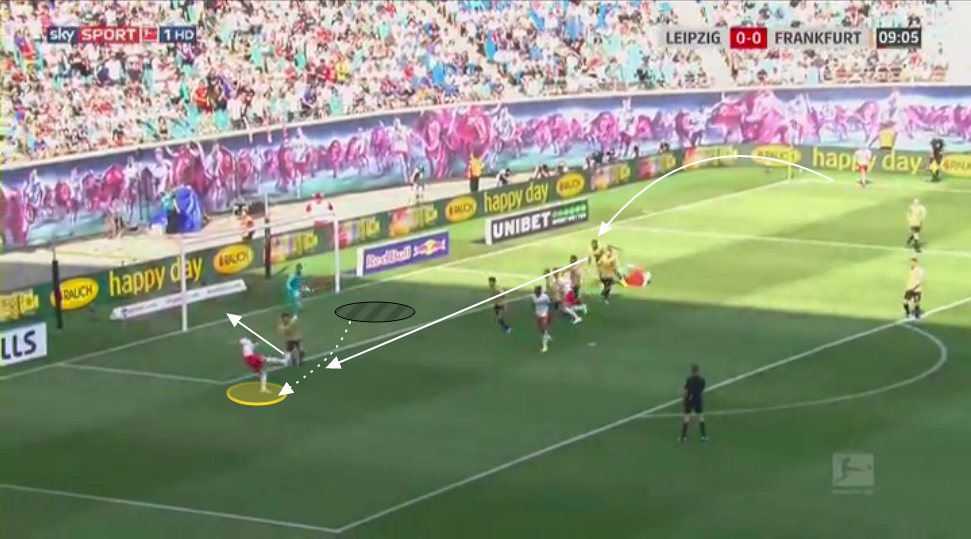 Werner took up a position in front of the goalkeeper before the corner was taken. As the ball came in, he moved to the back post. Three Leipzig players ran into the box and Yussuf Poulsen met Marcel Sabitzer’s cross with a header to the back post. Werner had created enough space for himself to strike the ball past Kevin Trapp.

Frankfurt looked to prevent Leipzig playing out from the back, with 17.76% of Leipzig’s ball losses coming in their defensive third. 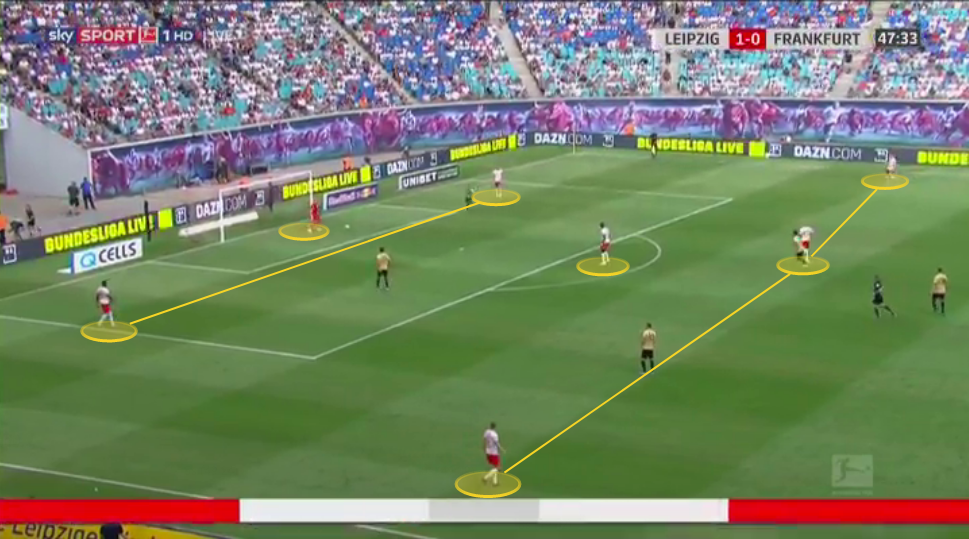 Above we can see how Leipzig set themselves up when goalkeeper Péter Gulácsi had the ball.

Centre-backs Will Orban and Nordi Mukiele split wide, whilst their third centre-back, Ibrahima Konaté, played in between the defense and midfield. However, as we can see in the image, the Frankfurt forwards are positioned to press wherever Gulácsi plays the ball. They wanted to encourage him to have to play long.

This was a contrast to Leipzig who prioritised defending space rather than pressing. Over the course of the game, they only recovered the ball seven times in the final third, compared to 45 ball recoveries in their third.

The decision to sit off and give Frankfurt possession was an interesting choice by Leipzig head coach Julian Nagelsmann. Against Hoffenheim on the first game of the season, Frankfurt played on the counter and had under 36% of possession. They used the long-ball, as they did for so much of last season, to play directly and bring their fast, attacking players into the game as quickly as possible. The balls over the top gave their likes of Rebić and Filip Kostić plenty of space to run into. It caused Hoffenheim lots of problems over the 90 minutes. Nagelsmann decided to sit off and let Frankfurt have possession, their deep defensive formation preventing any quick breaks with balls over the top. 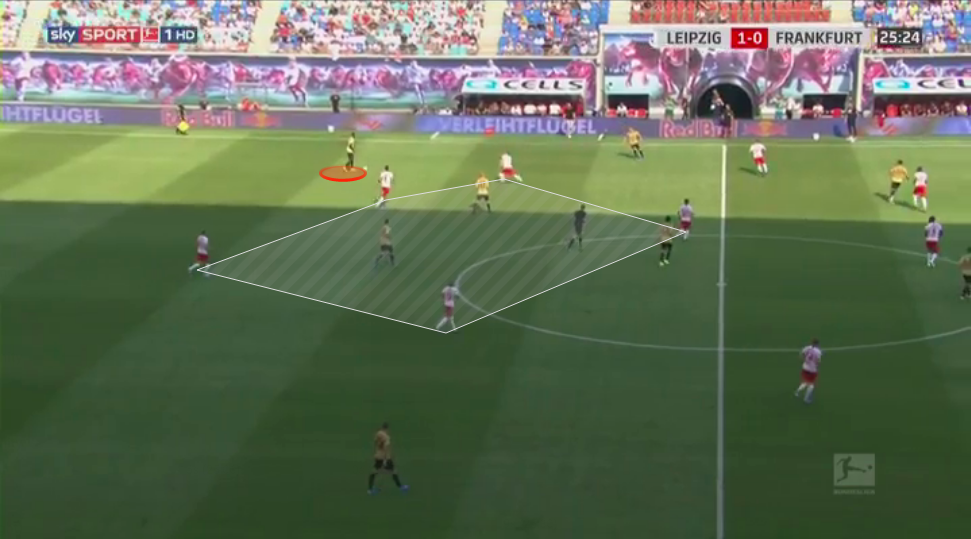 Leipzig allowed the Frankfurt back-three space to bring the ball forward, yet stayed very narrow to prevent either Sebastian Rode or Dominik Kohr from receiving. Klostermann also came higher to nullify the threat of Kostić receiving the ball in a deeper position. It was his dribbling that sparked much of Frankfurt’s attempts on goal against Hoffenheim, but he struggled to get going this weekend. Leipzig restricted him to just six dribbles over the game, three of which were successful.

This defensive shape forced Frankfurt to have to continually rework the ball across the field, yet Leipzig maintained this shape, regardless of which side the ball was. We can see this below. 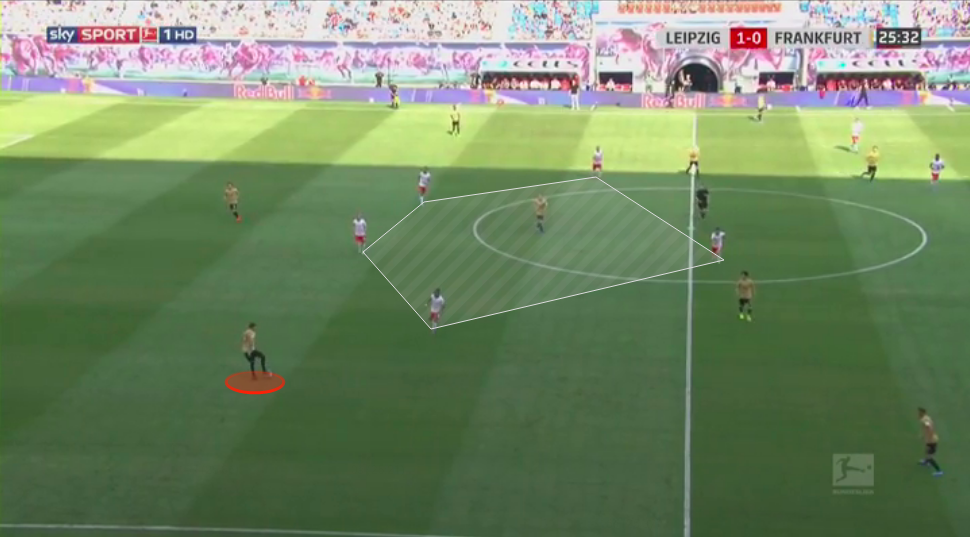 When Frankfurt worked the ball further forward, Nagelsmann’s men moved even narrower to defend the attack. Leipzig sought to prevent Frankfurt’s front three of Kamada, Gonçalo Paciência, and Dejan Joveljić from linking up with quick interchanges. In the analysis below, we can see a total of seven Leipzig players surrounding the ball. 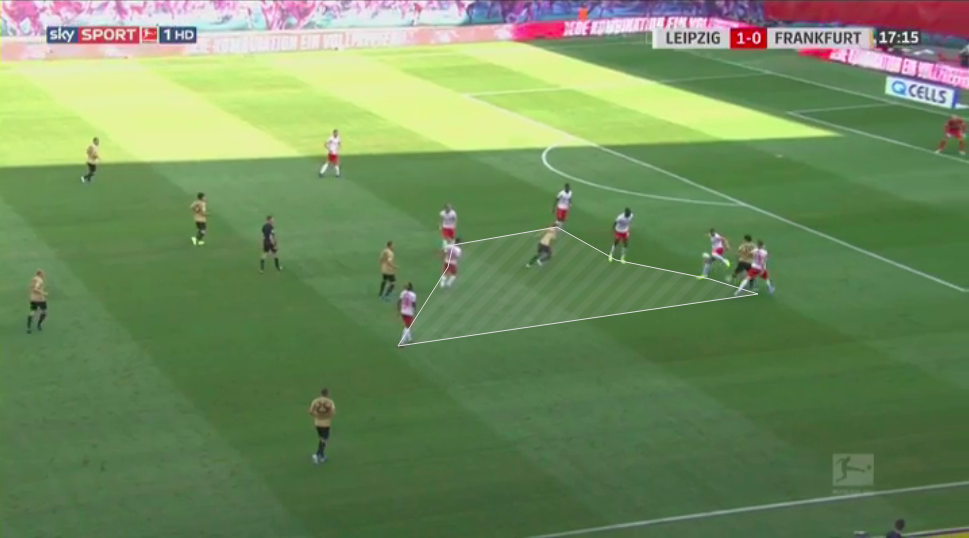 This defensive shape meant Frankfurt had to adjust to get their centre-midfielders on the ball more frequently. They did so by having Rode drop deep, almost playing as a centre-back when Frankfurt played out from the back. He looked to collect from deep and bring the ball forward, as we can see in the image below. 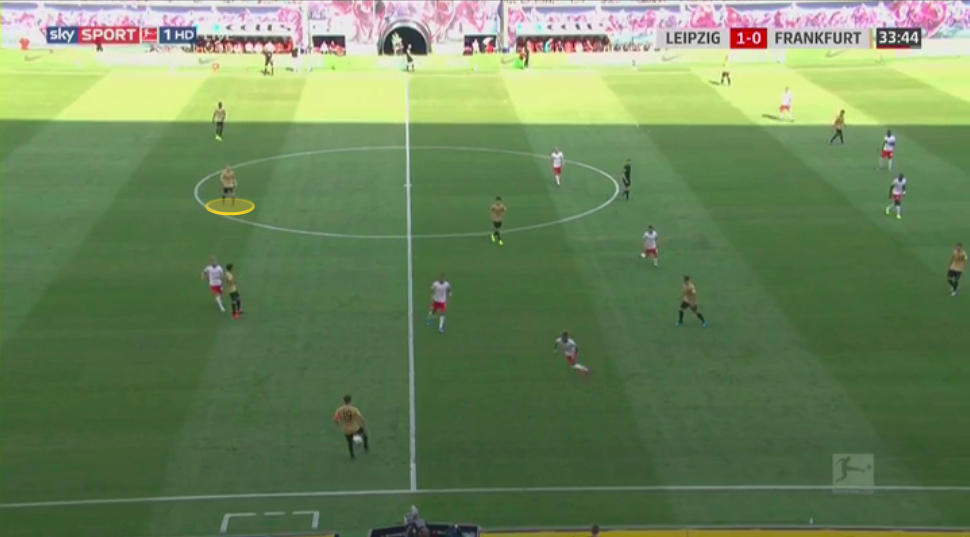 After half-time, Kostić’s approach changed and he also looked to come even deeper to get on the ball. Hütter used Kostić receiving the ball in a deeper position, as a trigger for Kamada to push forward into the front three. Both Paciência and Joveljić split creating space in between the two of them for Kamada to run onto the ball over the top. However, this was unsuccessful.

Frankfurt enjoyed the majority of the possession, with 56.37%, Leipzig seemingly happy to sit back in a low block, before breaking on the counter. Despite being given the majority of possession, Frankfurt managed only three shots in the first half. Meanwhile, Leipzig registered double this amount. Had Werner turned the ball into the open goal in the 18th minute, they would have been 2-0 up. However, Klostermann’s ball across goal was fractionally behind the striker, and the score would remain 1-0 until the 80th minute.

Over the 90 minutes, Leipzig launched nine separate counter-attacks. They managed a shot on goal from a third of these counters. This was more than double what Frankfurt managed.

It was a counter-attack that proved decisive in the end for Leipzig, their second goal coming directly from such an attack.

As they countered, Nagelsmann used his two forwards to find space behind the Frankfurt back three. Depending on the side the counter-attack took place down, one forward would occupy Frankfurt’s narrow defensive three, whilst the other forward would hug the opposite touchline. 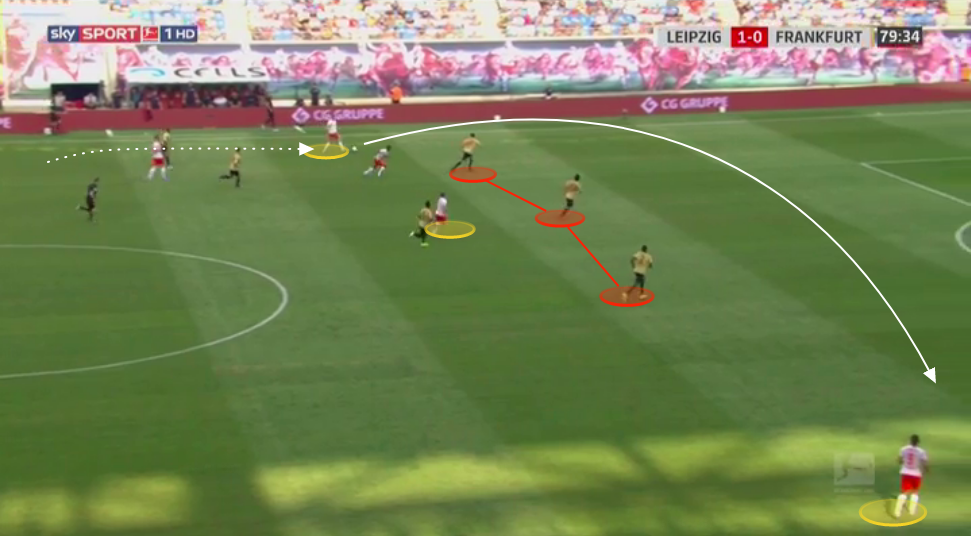 As the attack occurs down the left-side we can see Werner playing centrally in the above analysis. Poulsen plays as far wide as possible away from the Frankfurt back three. Due to the speed of the counter, Kostić isn’t deep enough to cover Poulsen defensively. The ball is played across and Poulsen can score, unopposed.

After Leipzig’s second, Frankfurt played with a much greater intensity going forward and committed more players when attacking. Below we can see how high both Kostić and second-half substitute Timothy Chandler were pushed as they looked for a way back into the game. 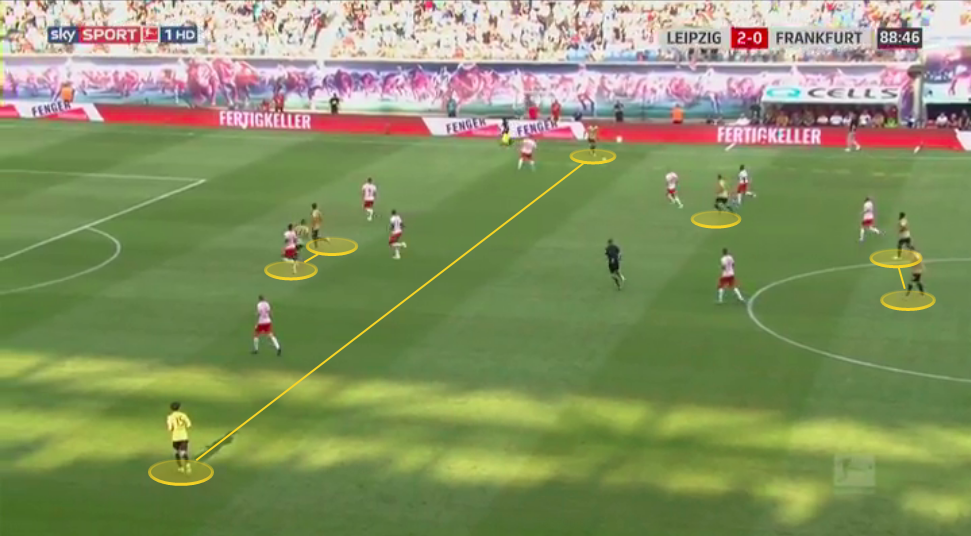 Leipzig almost weathered the storm, until Paciência finally put a chance away in the 89th minute, a cross coming from Timothy Chandler as he pushed high. However, it proved too little too late, and Leipzig hung on for the three points.

Leipzig was a worthy winner throughout the game. Despite a similar amount of shots on goal from both sides and Frankfurt’s greater possession, Leipzig had the better chances. Their xG of 1.61 compared to Frankfurt’s 0.81 supports this.

Leipzig was patient when defending throughout the game, and Frankfurt was susceptible to the counter-attack. They also looking short of ideas when in possession.

Only two weeks into the Bundesliga, Nagelsmann’s side have managed to show their intent for the season with a professional win over a side that finished in the European spots last year.

Leipzig managed only 15 points last season out of a possible 36 against the rest of the top seven. Picking up a win on their first game against such a side is a good start in their attempt to breach the gap between Bayern Munich, Borussia Dortmund, and everyone else.