Borussia Mönchengladbach have been the Bundesliga’s most consistent side so far this season, and are rightfully perched at the top of the table. Their only two losses have been against RB Leipzig and Borussia Dortmund, and their only draw against Schalke. Along with Bayern Munich, these teams are arguably their main rivals this year for the Meisterschale. However, outside of these games, they have won every league game, with this weekend’s 3-1 triumph over Werder Bremen giving them their eighth league win of the season.

This tactical analysis looks at the tactics used by both Marco Rose and Florian Kohfeldt in this Bundesliga fixture. 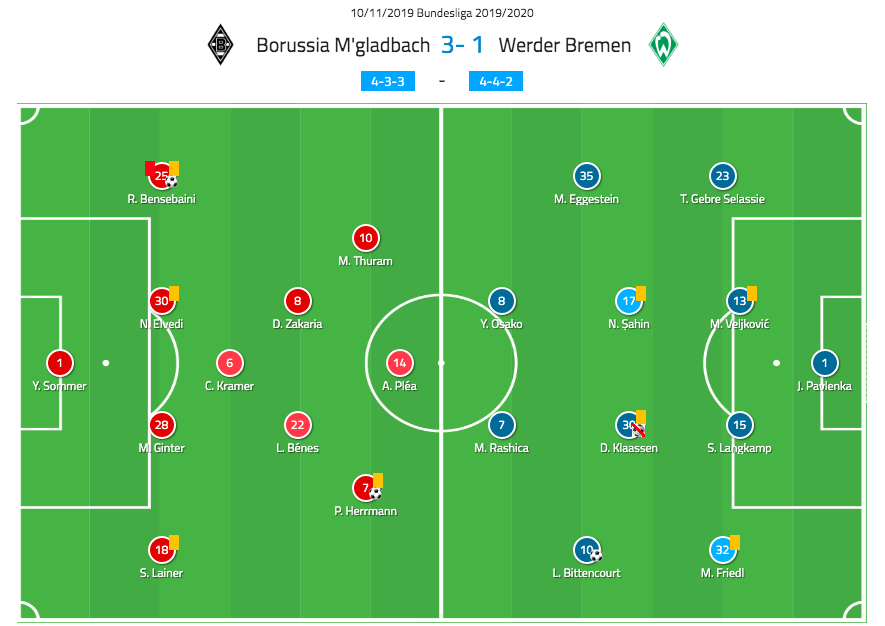 Werder Brememn fielded a 4-4-2 formation with a midfield four of Maximilian Eggestein, Nuri Şahin, Davy Klaassen and Leonardo Bittencourt. Marco Friedl played behind Bittencourt at left-back and would see much of his side’s possession in the game feed through him.

Mönchengladbach lined up in a 4-3-3 formation; the first time Rose had used a back four in the last three games. He used a back three in their games against Roma, Bayer Leverkusen, and Borussia Dortmund. With this formation, they recorded two wins and one loss.

Personnel-wise there were several changes from the midweek win over Roma. Tony Jantschke, Oscar Wendt, Florian Neuhaus, and Lars Stindl were left out, whilst Patrick Hermann, Christoph Kramer, Ramy Bensebaini and Alassane Pléa came into the starting lineup.

After Hermann’s second goal of the game, and the team’s third, Mönchengladbach dropped both Thuram and Hermann deeper to preserve the lead, sitting in a 4-2-3-1

Jonas Hoffman came on in the 34th minute for Kramer, and the pass map below shows how deep he sat, often falling back into the back three, whilst Lainer and Bensebaini pushed high and wide to provide width for Mönchengladbach.

Bremen’s shape was particularly interesting, and I will discuss it in more detail later on, however, what is worth noting is how committed to attacking down the left-side they were. The thick left line on their left-flank shows how frequently they played down this side. Left-back Friedl was involved in their two most common pass-links, whilst left-winger Bittencourt was involved in four of their top six pass-links as the map below shows.

Borussia are blessed with a plethora of attacking talent, and Pléa and Thuram are two of the Bundesliga’s most dangerous players. In fact, the two forwards both rank in the top four in the league for expected goals and assists, behind only Timo Werner, and Robert Lewandowski as the analysis below shows. Not bad company. 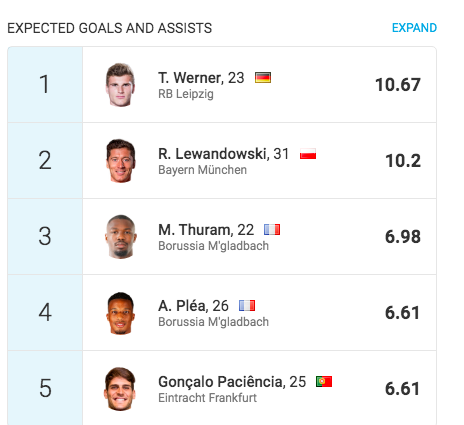 The two players are blessed with pace, and strength, and are smart with their movement in creating enough space to take advantage of these talents.

Pléa is, of course, the centre-forward so naturally takes up positions in central areas. He is an intelligent player who capitalizes on the movements of both Hermann and Thuram to create space for himself.

The example below highlights how Bremen’s defence struggled to cope with the subtlety of his movement in attack.

As László Bénes receives the ball Hermann drops into the half-space looking to receive the ball. Pléa occupies the space between both centre-backs.

Due to the positioning of Stefan Lainer high on the right-side, Bremen’s left-back Friedl has to play in between Hermann and Lainer.

Pléa drops deep into the vacant midfield area that has been left free by Mönchengladbach’s midfield three dropping deep themselves. He is then able to move into this area unmarked, and as he does so it frees up Bremen’s left centre-back to move closer to Hermann. 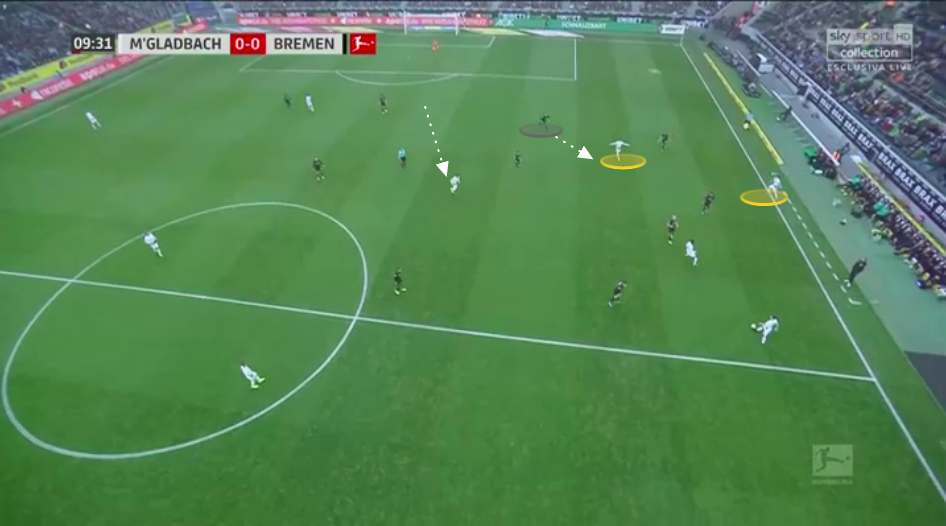 Yet in doing so this creates a space in between both of Bremen’s centre-backs which Plea now runs back into in order to receive the through ball. 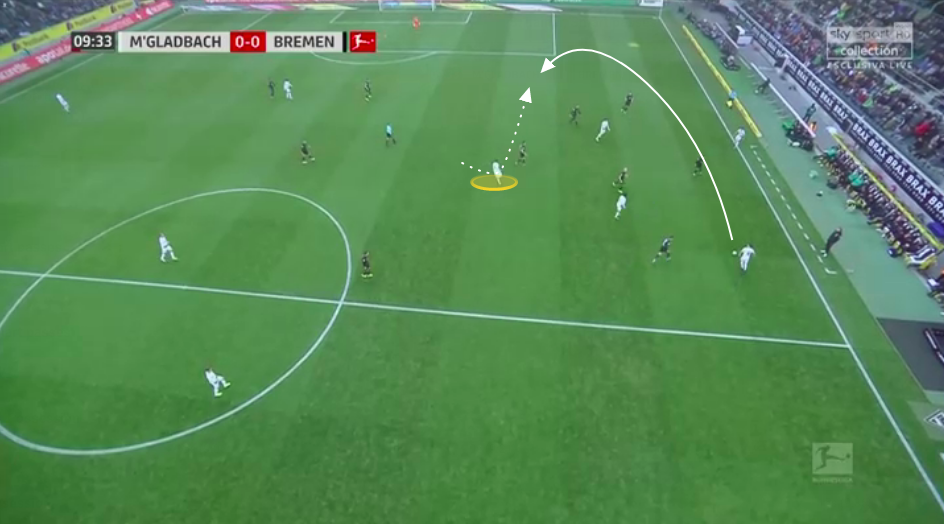 Thuram’s movement is predominantly based around using the pace which he possesses to get behind the opposition defence. Teams tend to avoid playing a high line against him, however, against Bremen, despite a lack of space in behind, he still looked to use what space he could find. With the ball being played out from the back, he played far closer to Pléa than Hermann did. With Pléa often dropping slightly to look to receive, it allowed the smallest of gaps in behind the defence as the Bremen centre-back followed Pléa whilst he looked to receive. A simple curved run timed to perfection meant that Thuram was able to latch onto direct passes played over the top. 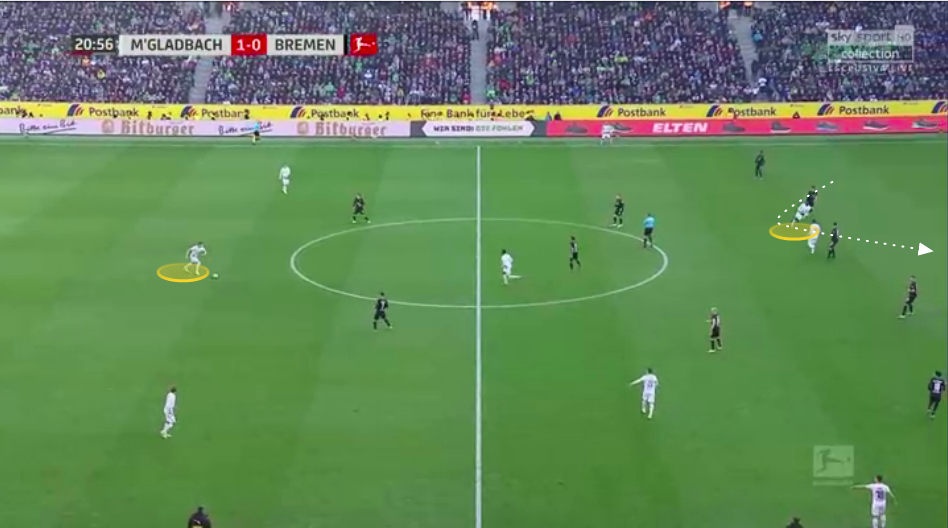 Bremen were direct in their buildup play, and it was only once Mönchengladbach were 3-0 up did they actually start to impose themselves on the game and play passing football. The analysis of their long pass percentage below shows how they began the game with 20% of their passes long, whilst in the final 15 minutes, it was just 6%. They scored their goal in the 93rd minute. It’s fair to say that the commitment to playing directly was perhaps the wrong decision. 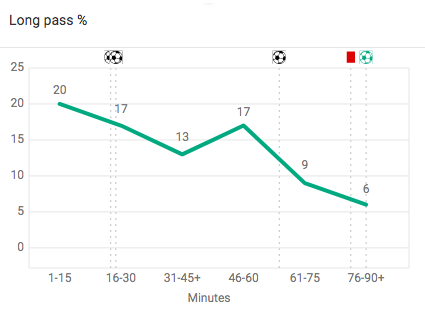 Bremen struggled to play out from the back with freedom as Borussia engaged in a high press with a 6.29 PPDA over the course of the game. Kohfeldt looks to have his side play through the lines promptly. Centre-back Langkamp pushed up into a “six” role as thy looked to play out, and his high positioning meant that the rest of Bremen’s midfield could remain somewhat higher. 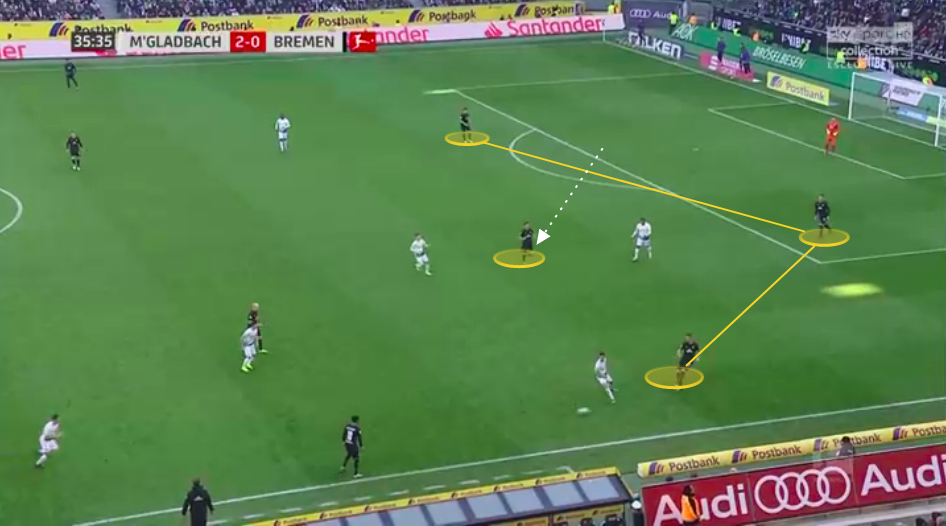 We are able to see this clearly in the image below with Bremen essentially taking up a 3-1-4-2 formation in possession. The positioning of Langkamp not only allowed Bremen’s midfield to sit higher, with the aim of restricting Borussia’s high press, but it also meant that the away side could have genuine width with their central areas so crowded. With Mönchengladbach playing so compactly this provided an excellent chance for them to get behind the home team in attack. 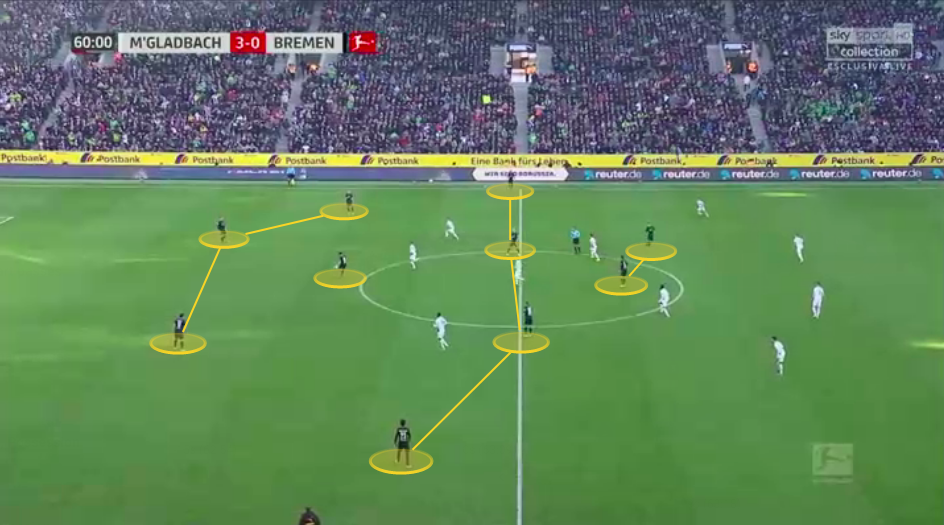 Unfortunately, Bremen were disappointing in their delivery from wide areas. The cross-map below not only backs up the statement on Bremen’s commitment to playing down the left-side (with only two of their attempted crosses coming from the right-side), but it also highlights their lack of accuracy. Bittencourt will be disappointed to have finished the game with a 17% success rate from his six crosses, and to only manage three accurate crosses from 11 attempts is no doubt a reason they fell short in this fixture, with so much of their attacking intent coming from the left flank.

As much as this is down to a lack of quality in the final third from Bremen it is can also be attributed to an incredibly sturdy defensive performance from the home side. Mönchengladbach won 65.22% of their defensive duels, whilst there was a significant increase in their aerial duel win percentage, which this season has been an average of just 41.1%. However, in this game, they managed to win 66.67% of their aerial duels.

Borussia did a phenomenal job of using the pace they had at their disposal to launch effective counter-attacks periodically throughout the game. It was their left-flank which served them best with this tactic, with Bensebaini and Thuram being two individuals with notable speed.

Bremen sat relatively deep in defence and were particularly compact in their shape and Mönchengladbach struggled to break this down.

Their counters came from two areas. One, with Bensebaini being able to turn defence into attack in a matter of moments through his considerable speed. Whether that was through making a tackle, or interception, Bensebaini used big touches to punch the ball down the left-flank and ensure Mönchengladbach’s transition to attack was efficient and effective.

Thuram remained high whilst Mönchengladbach defended in their own defensive third, with the sole reason of being a quick outlet to relieve pressure and launch a counter-attack. Mönchengladbach are an effective side when it comes to playing direct passes, and this is no different in transition, as they were able to find Thuram with the quick ball over the top and create a counter-attacking opportunity. 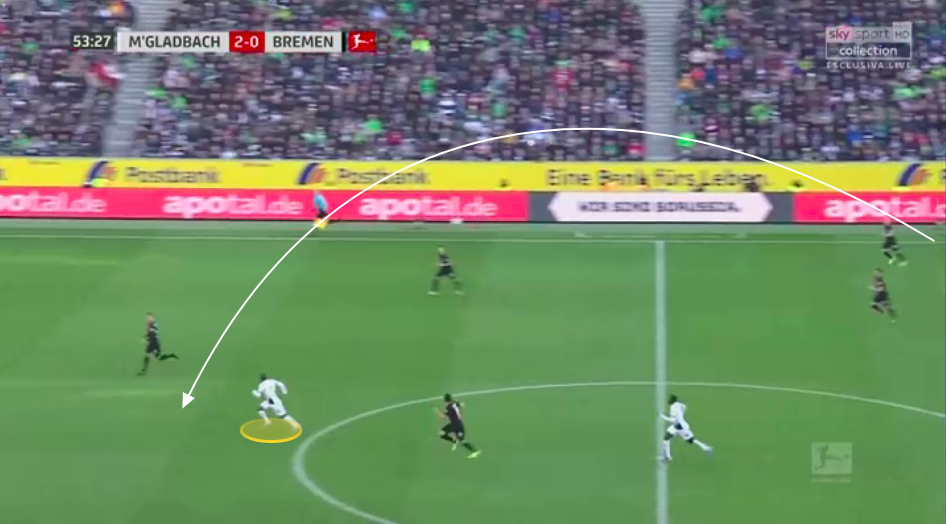 The final moment that I’d like to highlight is how Mönchegladbach scored their first goal. Bremen held a compact defensive shape, as mentioned earlier, and were difficult to create clear goalscoring opportunities against. Both sides managed 16 shots on goal, with seven on target each as well. However, Bremen, in fact, had the best opportunities with an xG of 1.92, compared to Monchengladbach’s 1.5. This is a credit to their strong defensive shape which forced Mönchengladbach to take shots from lower-percentage areas on the pitch. Therefore Bremen would no doubt have been disappointed to concede their first goal from a set-piece. Mönchengladbach were clinical and this set-piece was simple, but clearly straight from the training ground.

In the image below Bremen have set their defence in a compact line allowing little to no space between them for Mönchengladbach players to infiltrate. However, it is the positioning, and subsequent movement of Bensebaini, who is highlighted standing in an offside position, and his teammate Pléa that created enough space for the left-back to be picked out.

In the image above it should be noted that both Pléa and Bensebaini are standing in line with one another, in between the second and third defender. The first defender is expecting to pick up Pléa, whilst the second is expecting to pick up Bensebaini. Pléa initially moves towards the first defender, but as the image below shows, he purposefully changes his run and moves closer to the second defender, bringing the attention of Eggestein onto him.

WIth both defenders now focused on Pléa, the forward moved enough for Bensebaini to slip into the space now between the second and third defender where he was picked out with the free-kick and headed home.

Werder Bremen were organized and created chances where on another day this result could have gone this way. However, it was Borussia’s smart movement in the final third, along with their ability to counter and relieve pressure, as well as their solid defence that rightfully meant the three points went their way.

This win puts Borussia four points clear at the top of the table. However, with two of their next three games coming against Freiburg and Bayern Munich, we will see how serious their title challenge is.