A top of the table clash between two of Germany’s biggest clubs was the highlight of the Bundesliga fixtures this weekend, with Borussia Monchengladbach taking on Bayern Munich at Borussia Park. Bayern were looking to get back on track under new manager Hansi Flick, after a good run of results was ended with defeat to Bayer Leverkusen last week. Gladbach on the other hand, were looking to remain top of the table following an excellent season so far. In the end, it was Gladbach who took all three points thanks to some late drama, and the tactical adjustments throughout from both sides led to an interesting match. In this tactical analysis, I will look at these tactical adjustments from both sides, and explain how Bayern’s first-half dominance was undone by a pressing switch by Gladbach in the second half.

Gladbach lined up in their 4-diamond-2 formation which we saw lots of in early parts of the season, which also saw the return of their pressing structure within this system. Bayern meanwhile employed a 4-3-3, with Thiago playing a key role throughout the game as I will explain in this analysis. 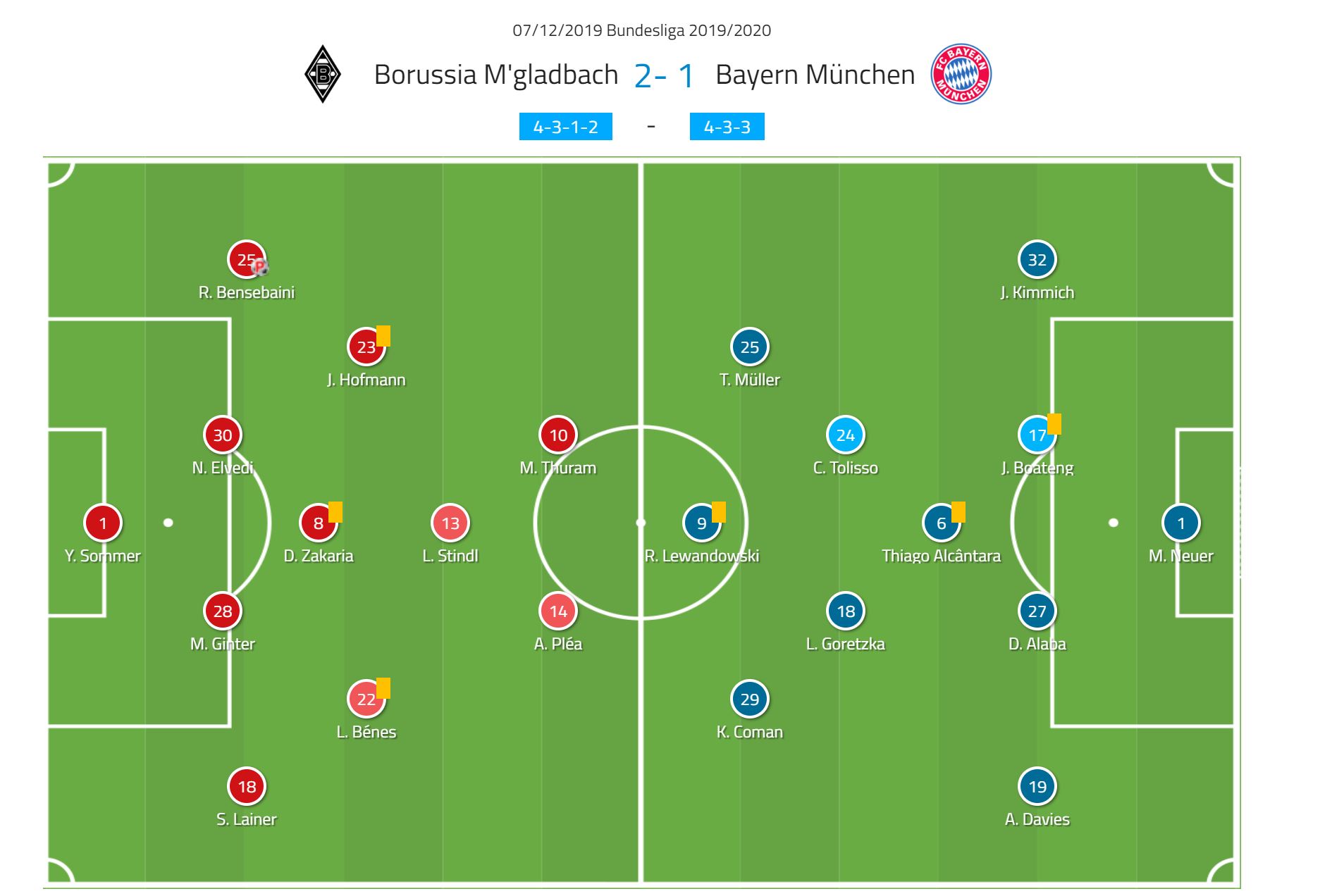 The first five minutes of the game saw Gladbach press relatively well within their pressing structure which I’ve explained numerous times and we can see below. The two strikers press the centre backs while the number eights within the diamond press the full-backs. In central areas, the number ten will press the number six, but this changed in wide areas.

Below we can see the problems Gladbach had due to Bayern’s movement. When the ball reached a full back, the nearest number eight would press, with the ten then coming across to cover the nearest player to the ball. This Bayern central midfielder (number 10) would run into the wide areas, in order to increase the space for the number six in the middle.  This left a passing lane straight to the six (Thiago), with the strikers not cutting the lane and Bayern’s spacing affecting the midfield press. Bayern’s number eight stays more centrally, forcing his marker to stay with him, while Lewandowski dropped deep between midfield and defence in order to receive, which attracted the attention of the Gladbach six Denis Zakaria. 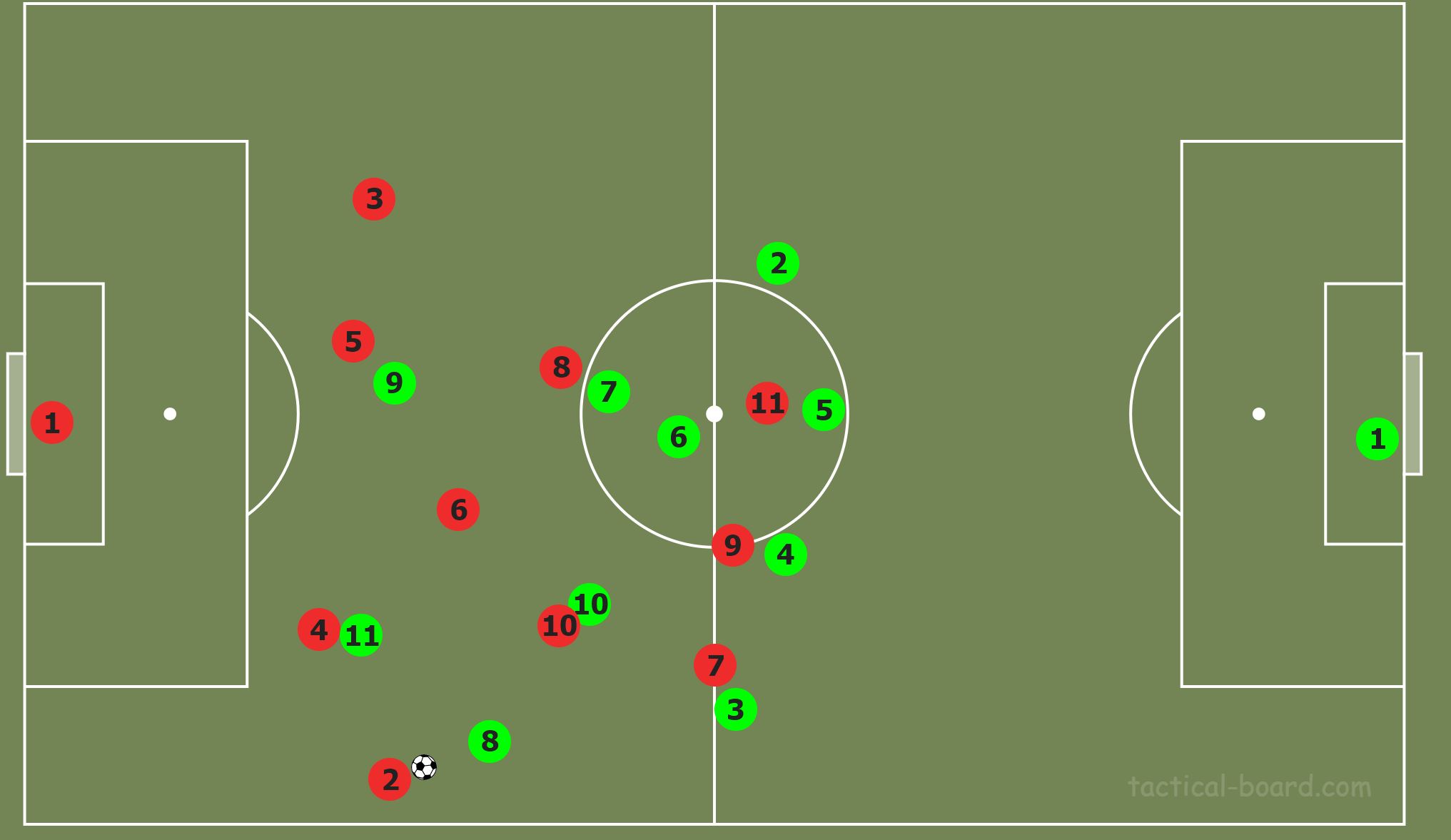 We can see this below, with the eight stepping out to press and the ten covering his marker. Alassane Pléa then struggled to cut the passing lane between full back and pivot effectively, which often gave Bayern a point to switch the play from. Zakaria could potentially cover the pressing eight’s marker, but Lewandowski drops deep so that the defence can’t get tight, and so Zakaria has to mark him.

We can see some more examples of this happening below, with again that passing lane between the pressing eight and the striker exploited. Here, László Bénes has the opportunity to press Thiago or at least move forward into a better starting position to better cut passing lanes when Thiago receives the ball, but instead he remains in his position, and Thiago is able to switch the ball, forcing five Gladbach players to try and recover quickly in the process.

We can see here Stindl moves to press, and with the lane down the line covered by an eight he should close the lane off to Thiago by changing the angle of his run. Again though, Thiago makes himself available to receive in this area, and Bayern can again switch the play.

Bayern control the first half

Gladbach’s pressing struggles meant they could not gain possession high up the pitch and that Bayern could progress forward often, which caused Gladbach at times to drop deeper to avoid being played through. With not much luck winning the ball high up through pressing therefore, Gladbach had to rely on their own build-up play, which again thanks to Bayern’s tactics was nullified well.

Bayern looked to limit Gladbach’s counter-attacks through a high press and an extremely high, aggressive defensive line. This limited Gladbach’s abilities to combine using the strikers, who often receive the ball with a man at their back and then look to give the ball to players in lateral areas with space ahead of them to run into.

We can see an example of Bayern dealing with this below, with Pléa receiving the ball and being pressured aggressively from behind. This pressure from behind rules out any turn from Pléa, and so he must look for lateral passes or backward passes. However, Bayern are extremely compact around Pléa and are able to press in from all directions to ensure Gladbach don’t progress the ball. The other central defender holds the line high, ensuring vertical compactness throughout the team.

We can see this vertical compactness here, with Bayern’s extremely high line. This shape from Bayern meant that Gladbach struggled to play through, and instead had to look to play the ball over when possible, something which they struggled to do often. The pace along Bayern’s back line allowed them to take this slight risk, and Bayern also played an offside trap several times to catch runners offside.

Bayern also pressed high up the pitch with numbers as we can see below, with Bayern pressing in a man orientated way, which Gladbach struggled to deal with and as a result often went long, where the ball couldn’t be retained due to the pressure from behind by Bayern. Bayern’s full-backs would push up and press Gladbach’s full-backs, with the central midfielders man-marked, while the wingers would press the wide centre backs and the striker would remain central and look to mark the pivot where possible.

Bayern’s rest defence in the first half was also very sensible and allowed them to contain Gladbach and limit the counter-attacks they had. We can see an extremely high line allows for that pressure from behind to applied to the strikers, while the deep pivot and full back allow for depth and also allow for counter-pressing just outside the edge of the box to occur if needed.

At 1-1, Bayern’s rest defence suffered slightly, and Bayern committed more men forward which ultimately led to Gladbach winning a penalty where in the build-up a striker receives with a man to his back and plays the ball laterally. In the first half, Gladbach had to try and beat the counter-press and get in behind quickly, which I only saw two opportunities to do so.

After going 1-0 down early in the second half, Gladbach began to press in a 4-2-3-1 formation, which allowed for Thiago to be marked and therefore that passing lane to be cut off. This allowed Gladbach to gain more of a foothold in possession and saw the first half flipped on its head with Gladbach now counter-pressing and boxing Bayern in.

We can see this change below, with the wingers now pressing the full-backs and the number ten marking the number six.

We can see here Gladbach’s change in pressing in wide areas, with Stindl now focused on cutting this passing lane inside to Thiago. As a result, Bayern struggled to switch play and were forced long, where Gladbach’s aggressive centre backs were able to retain possession and build attacks.

We can see these aggressive centre backs here helping Gladbach to prevent counter-attacks and therefore sustain attacks, as Bayern did in the first half. This counter-press from Elvedi allows him to win the ball and drive forward into space, where he plays a pass which results in a corner which Gladbach equalise from.

The higher line and aggressive centre backs allowed for Gladbach to become more compact, which benefitted their counter-pressing high up the pitch, as we can see below. This allowed them to use their offensive quality and movement and create chances. 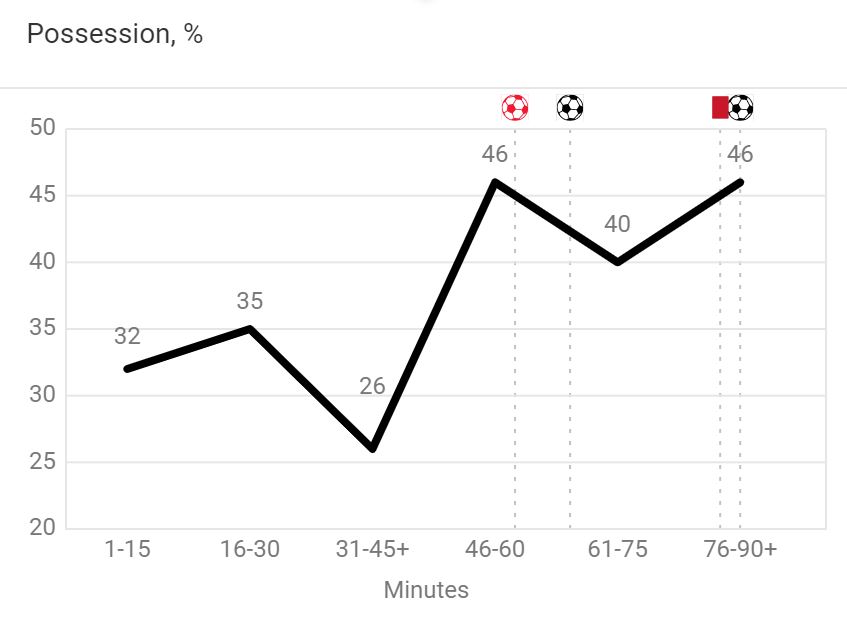 The tactical adjustments within the game had a massive impact, and we can see the difference between the two halves with Gladbach’s possession stats throughout the game shown above. Bayern had opportunities while they were on top, but Gladbach were ultimately more clinical, and some poor game management from Bayern ultimately cost them. Winning these kind of games reaffirms the idea that Gladbach are well and truly in this title race to stay, and Gladbach’s coaching team and players have to be given credit for adapting their pressing system midway through to change and ultimately win the game.