The return of the 2. Bundesliga had a “back to school” feel, the exception being that this is essentially the final term for students to make their case for promotion. Our hosts Greuther Fürth have had a reliable report card after 25 matchdays, sitting in fifth place and overachieving the expected grades. The opponent’s Hamburger SV, while sitting third, have been anything but convincing. Even so, Hamburg are in a box seat to take second should Stuttgart slip up.

This tactical analysis looks at Sunday’s big game in Fürth, analysing both team’s tactics and providing context to the result. 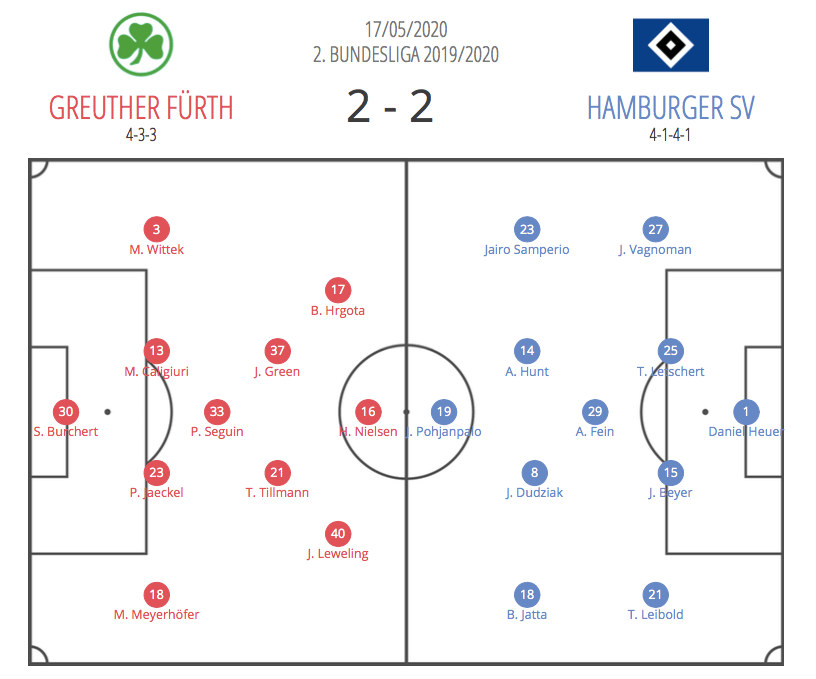 It may have been eight weeks since the last ball rolled, but that doesn’t mean managers are privy to keeping the same lineups. Stefan Leitl made five changes to the side that drew at Kiel on matchday 25. Three of the defensive four have been switched with Marco Caligiuri, Daniel Raum, and Maximilian Sauer out in favour of Maximilian Wittek, Marco Meyerhöfer, and Paul Jaeckel. Kenny Prince Redondo and Sebastian Ernst also missing out in favour of the talented Jamie Leweling and returning Julian Green.

Dieter Hecking also made several changes from the 2-1 win over Jahn Regensburg. The surprise comes with Rick van Drongelen getting axed with Jordan Beyer moving over to centre-back. Josha Vagnoman got the start at right-back. In midfield, out goes Louis Schaub and Christoph Moritz with former Borussia Dortmund junior Jeremy Dudziak and Jairo Sampario starting. Martin Harnik was axed up top in favour of Bayer Leverkusen on-loan striker Joel Pohjanpalo.

Hamburg playing through the press

Before Sunday’s game, Hamburg faced an intriguing challenge with the way Fürth defend in the initial third. Fürth is ranked second in pressing intensity at 7.52 – they work in tandem as the attacking three try and force a turnover. Hamburg would have to find solutions in breaking the press, if they can by-pass the attacking three Hamburg will find multiple avenues to attack. When down successfully, Hamburg eased passed the midfield and attack the Fürth defence. 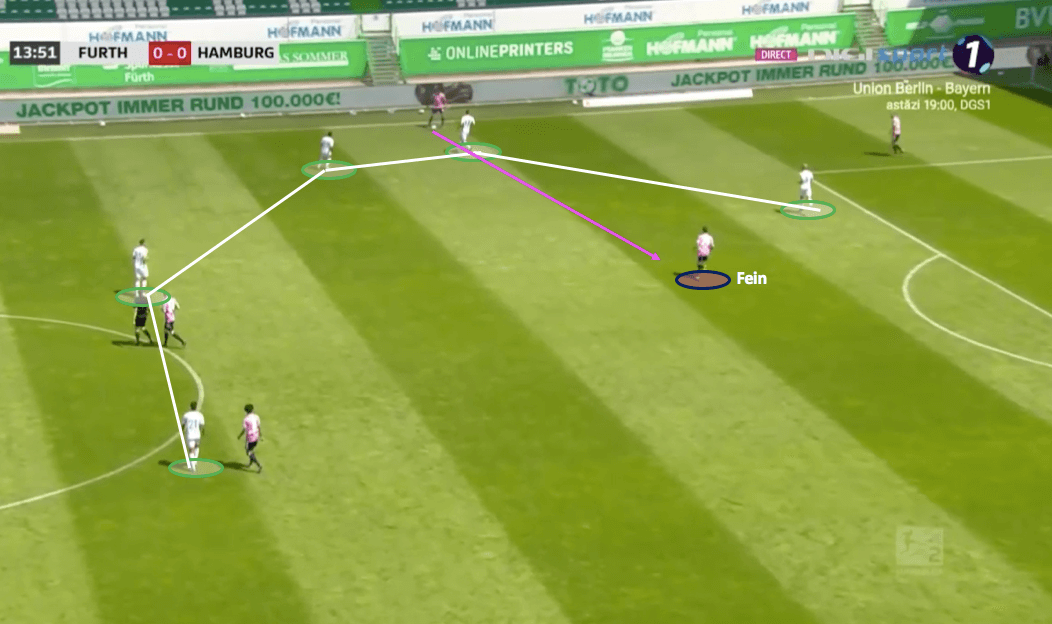 We have two examples of Hamburg successfully beating Fürth counter-pressing in the final third. Fürth defends in a 4-3-3 which is narrow at the top, it requires a stable work rate to ensure no holes are exploited. The one weakness with this set-up is when teams can switch the ball quickly. Vagnoman has possession and is challenged by Branimir Hrgota while the shape is set. Fürth wants to force Hamburg either backwards or down the line. Fortunately for Hamburg, Vagnoman is composed and finds on-loan Bayern Munich midfielder, Adrian Fein. 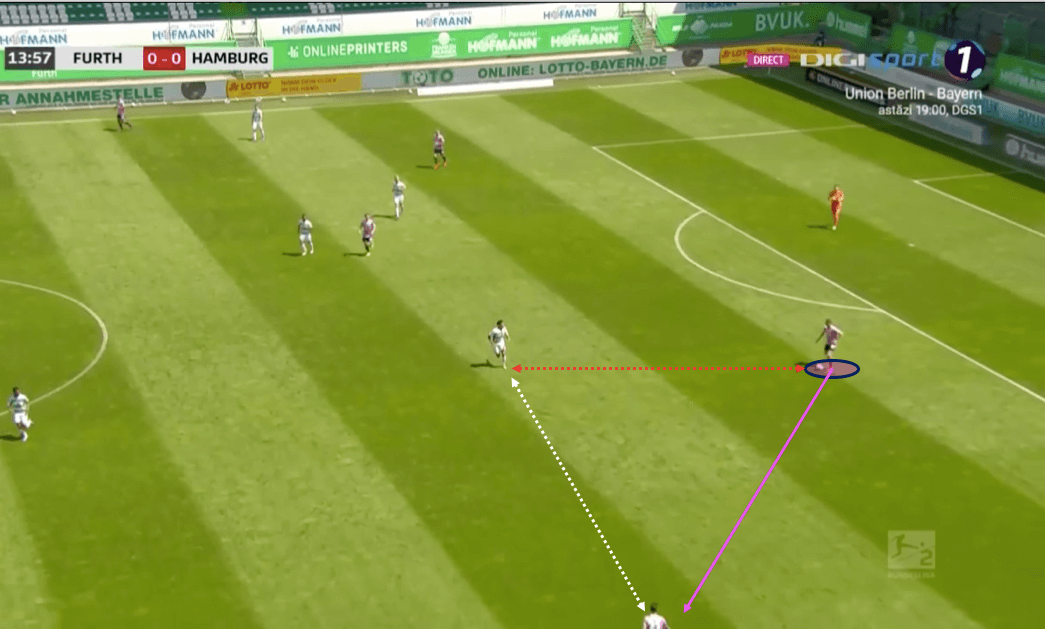 The pass to Fein opens up the far side of the ground for Hamburg to switch. As reference above, Fein plays to Beyer and in turn Tim Leibold. The key was getting the ball to Leibold who can drive at the defence. 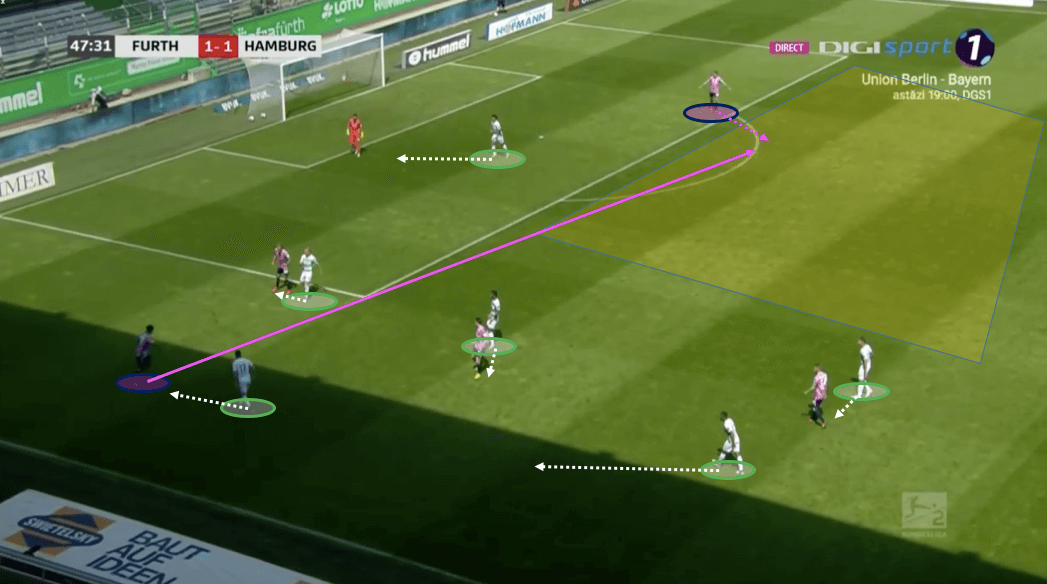 We can see another example of this in action, with Fürth now creating an overload on the near side of the picture. It’s virtually man-on-man defending with Vagnoman in possession. However, once again, there is an outlet as Leweling opts to mark the keeper. This creates a diagonal to Beyer with plenty of space. The pass eliminates six Fürth players as Hamburg enter an attacking phase.

Hamburg was able to exploit faults in Fürth’s 4-3-3 formation in defence. But more importantly, when pressed into a corner, the Hamburg defence was more than up to the task.

Fürth are a competent side in possession, seventh in the league in total possession per 90 minutes of 51.4%. They generally play relatively slow in comparison to the rest of the league (16.0), Fürth have two critical plays in the build-up which they use often. Out wide to the left-back Wittek, or the quickest option involves Hrgota dropping into midfield to come and collect before laying the ball off. This part of the analysis looks at both avenues in the main sections of build-up for Greuther Fürth. 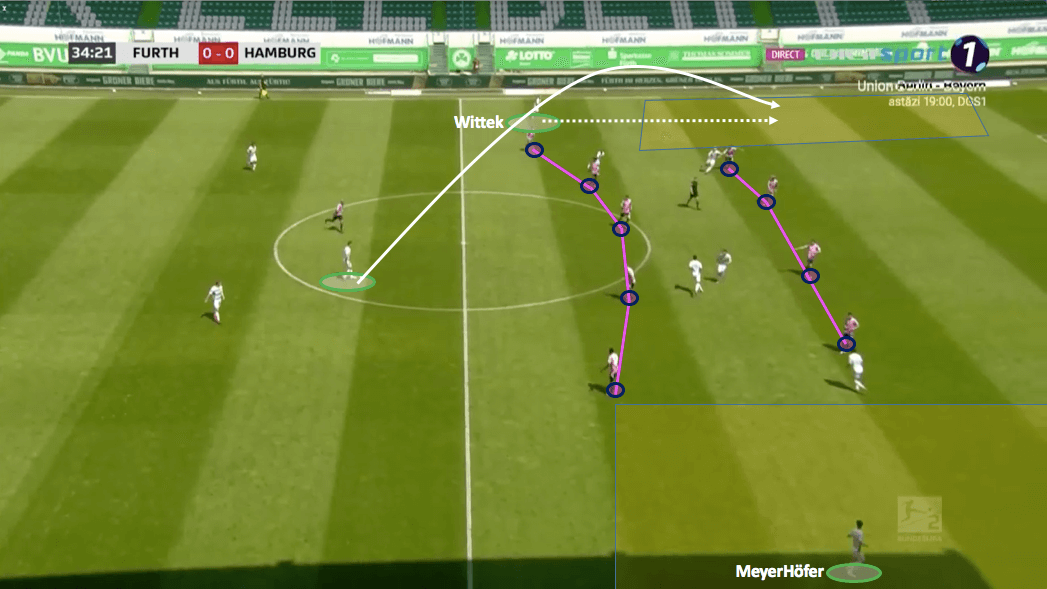 We start at the edge of halfway, and in the first half, this was quite an often situation. Hamburg playing a 4-5-1 defensively up to half time, its narrow shape allowing for options out wide for Paul Seguin. 75% of the attacks came from the left-hand side for Fürth, and with the spaces to exploit, Seguin finds Wittek in stride. Fürth can utilise the wide areas as the defensive four plays tight, trying to nullify the influence and options of the attacking three. Yet, as the wingers for Hamburg don’t track back, this allows the full-backs to play a prominent role.

Let’s take a look at Fürth’s shape in attack, most of their passes and movements coming in the central third of the pitch. They are tight and compact, only taking what Hamburg was giving them. As the game went on and at the time of Fürth trailing, we see the substitutes playing further forward than the original set-up. 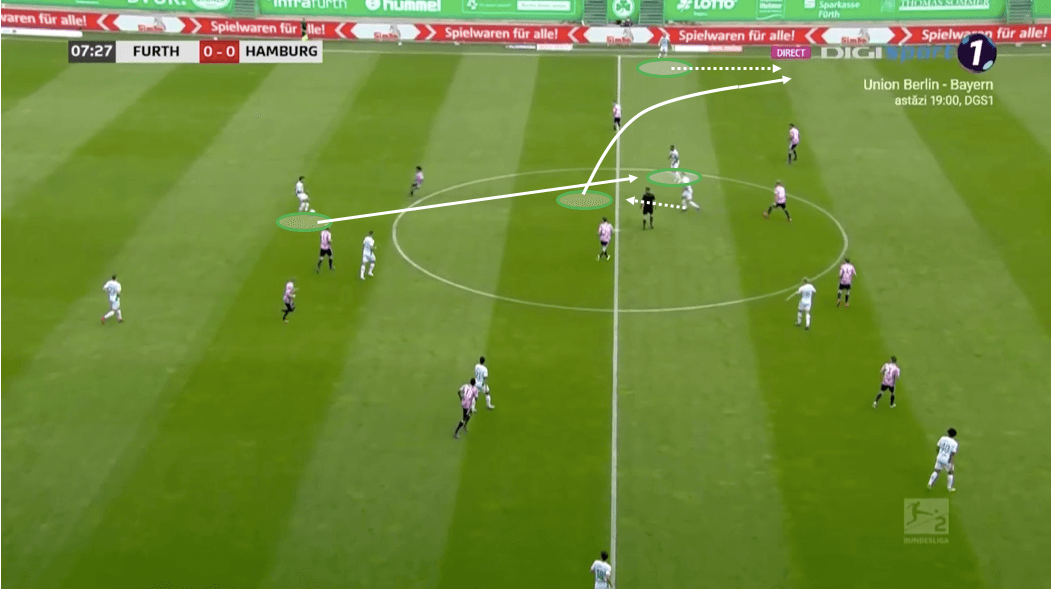 We mentioned earlier how Hrgota likes to drop into midfield to pick-up and play on the ball. An example of this is above, Marco Caligiuri plays the ball into the area of Hrgota and Green. On most occasions, Hrgota would take possession, however in this situation he acts as a decoy runner. When Green takes possession, he plays quickly to Hrgota, and with the spaced opening up he hits a through ball to Wittek.

Fürth’s build-up play was smart and precise, exploiting the areas Hamburg failed to cover before crossing the ball into the area. It was a real feature of their performance, and when Hamburg continued to remain tight defensively, Fürth kept going to the full-backs in Wittek and Meyerhöfer on the flanks.

Heading into the dressing room and level after Pohjanpalo’s equaliser just before the break, Hamburg had been pedestrian up to this point. Hamburg isn’t one of the heavyweights when it comes to counter-pressing, eighth in the 2. Bundesliga with 9.52 per 90 minutes. However, when Hamburg turn the heat, it became clear that Hecking’s side were able to make significant headway in winning possession in their attacking third. Let’s take a look at how Hamburg’s counter-pressing became far more effective in the second half.

The metric used for pressing intensity is “passes per defensive action” (PPDA). As we see above, Hamburg mixed up their pressing in the first half, and as a result of sitting back and allowing Fürth to be the assertive figure they conceded. For the first 30 minutes of the second, Hamburg were strong counter-pressing the Fürth build-up play. 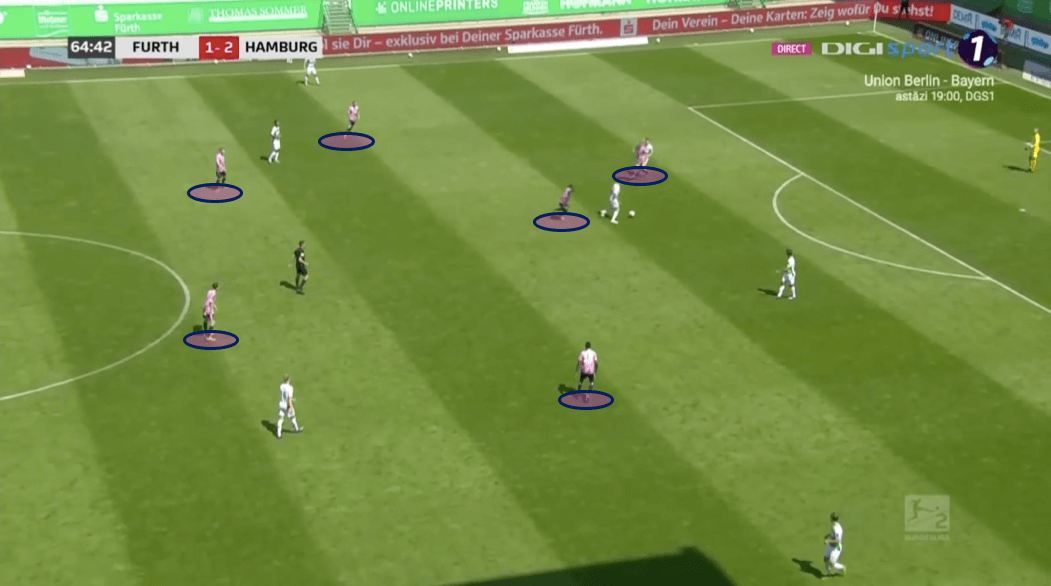 Hamburg’s best patch came between the 61st to 75th minute of the game with a peak of 6.7 PPDA. What Hecking’s side did well was force Fürth to play a tempo they weren’t comfortable with. Hamburg also played a much higher line in this time, and Fürth struggled. The picture above shows substitute David Kinsombi pressing Seguin, Kinsombi has teammates around him pushing the defensive line. Hamburg’s shape makes it very different to play out from, Seguin’s only option is passing back to the keeper. 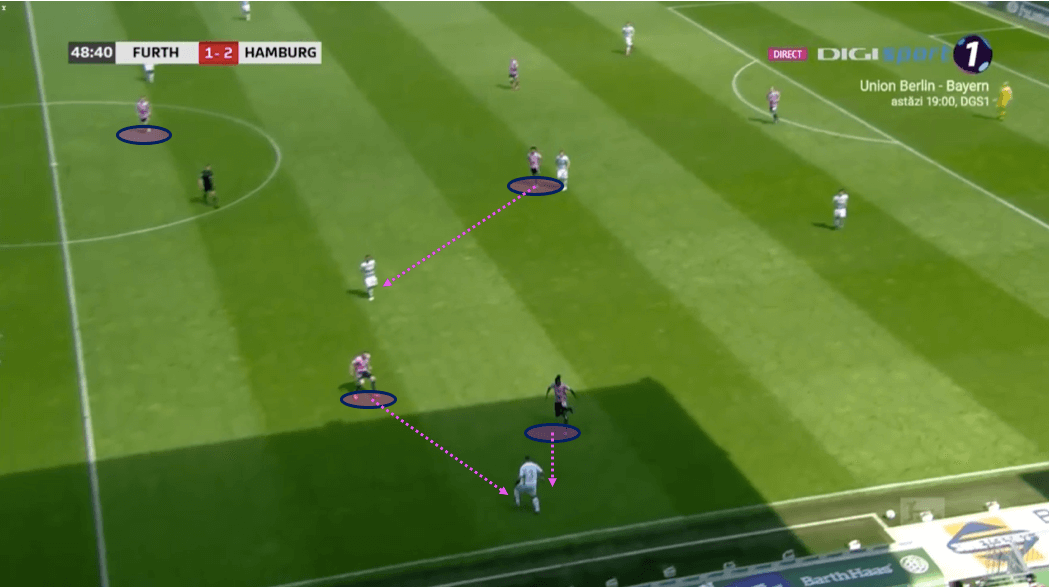 Much like Fürth, Hamburg looked to apply the squeeze down the touch-line and did so with great success. As Wittek looks to go centrally, he has Bakary Jatta and Aaron Hunt pressing him. The aim is to force Wittek to clear down the line. Wittek has a teammate in support but the intense press forces the error brings Dudziak into play who intercepts the ball.

When Hamburg applied tremendous defensive intensity, they swung the game into their favour. However, for the final 15 or so they reverted to sitting back much like the first half. This led to the inevitable concession.

The demise of defending crosses

When analysing the goals conceded in the 2. Bundesliga, there seemed to be a large number of goals conceded from crosses/set-pieces into the box. Whether it’s the lack of match fitness and playing for a couple of months, it was evident that some of the defensive performances weren’t up to scratch. It’s understandable to an extent after playing no competitive football for two months. In this game, three of the four goals conceded came from either a cross or a set-piece. It’s worth digressing to see if there is a typical pattern, poor defending, or excellent offensive play? 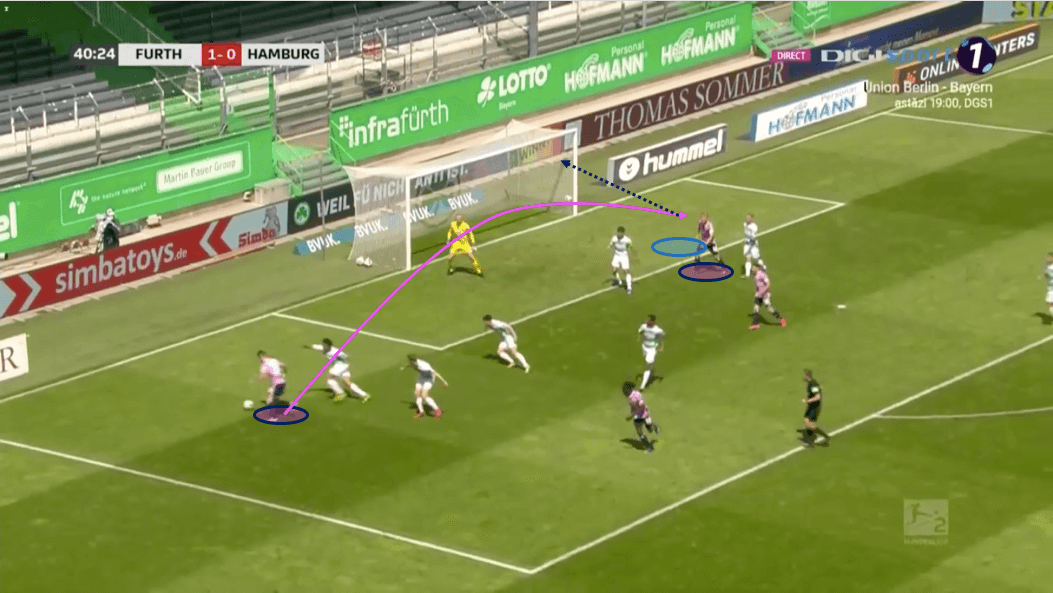 We will start with the goal Fürth conceded from a cross before finishing off with Hamburg’s efforts. The first ball is played from Jatta to Leibold, and Leweling initially does well but has to know Leibold is a one-footed player. By giving Leibold his left, you are asking for trouble.

As the Hamburg left-back is about to cross, Pohjanpalo has a good starting position. Caligiuri is ball watching while Wittek has allowed Pohjanpalo to get goal-side, a cardinal sin when defending. Leibold’s cross finds Pohjanpalo who scores past the helpless Sascha Burchert. The goal is avoidable for several reasons; one, if Leweling forces Leibold to his right Fürth have the support to try and disposes and secondly, poor man-marking allowed Pohjanpalo an easy tap-in header. 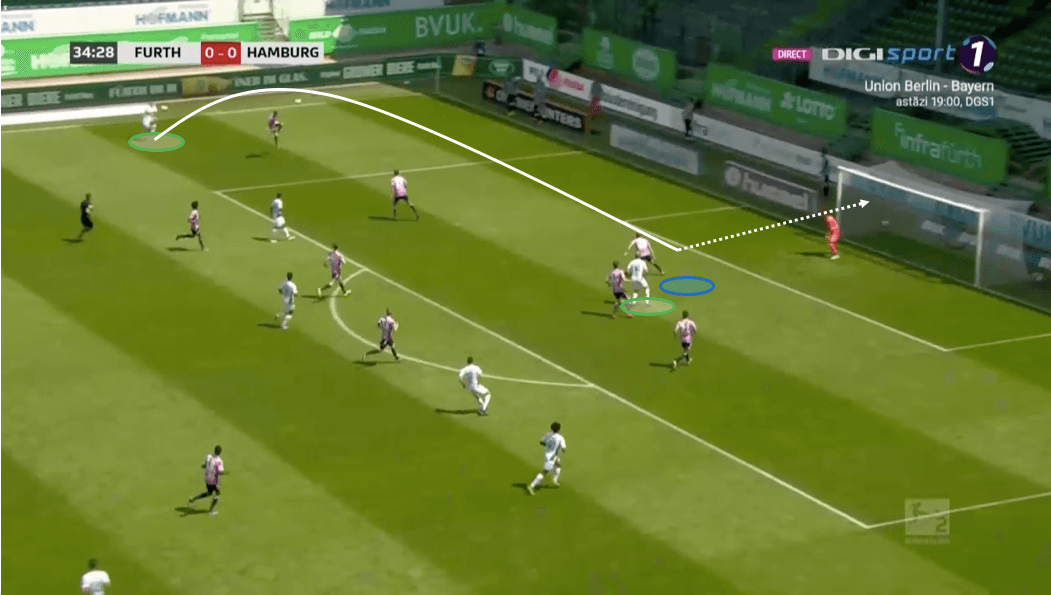 Onwards to Hamburg who gave up both goals to Havard Nielsen. The first coming on 35 minutes while the equaliser in stoppage time. The opener for Fürth comes from a brilliant cross by Wittek. The initial position for Letschert isn’t too bad: if the cross is weak, he will be able to intercept. The issue comes behind the Dutch defender, like Wittek before it’s Beyer giving Nielsen goal-side positioning. In this case, Letschert misjudges the flight which is perfect for Nielsen who scores past Daniel Heuer Fernandes. Like the first goal, the defensive aspect is inferior and arguably avoidable. However, the cross is too good that Nielsen was going to be the only player winning it. 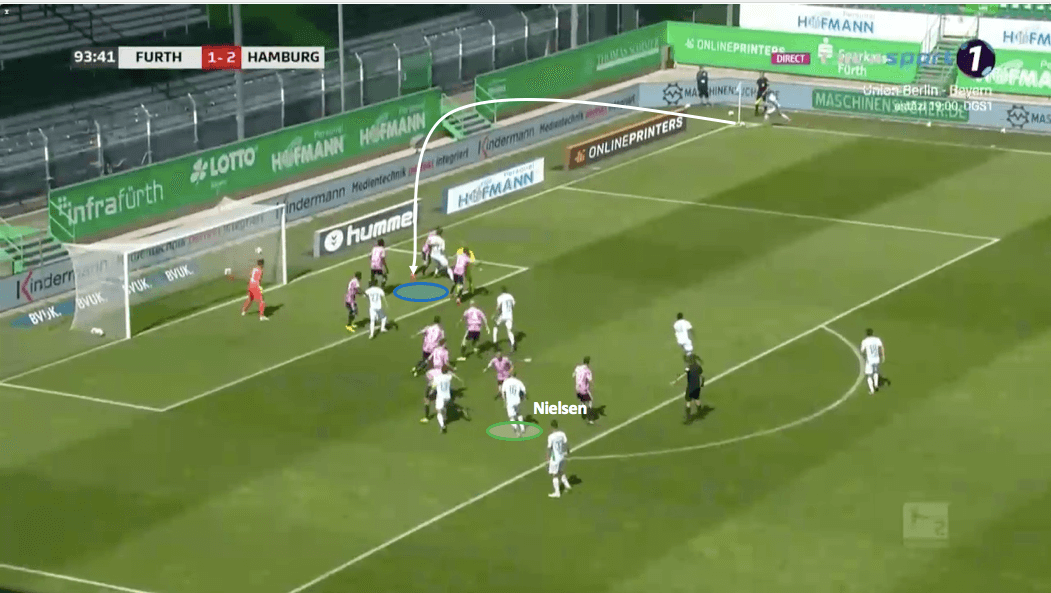 The equalising goal is from a pure, unadulterated scrap fest in the box. Fürth’s corner taker Marvin Stefaniak is aiming for the edge of the area where the Fürth keeper and Caligiuri. If neither can get their effort on goal, the chaos situation can take place at the edge of the six-yard box. 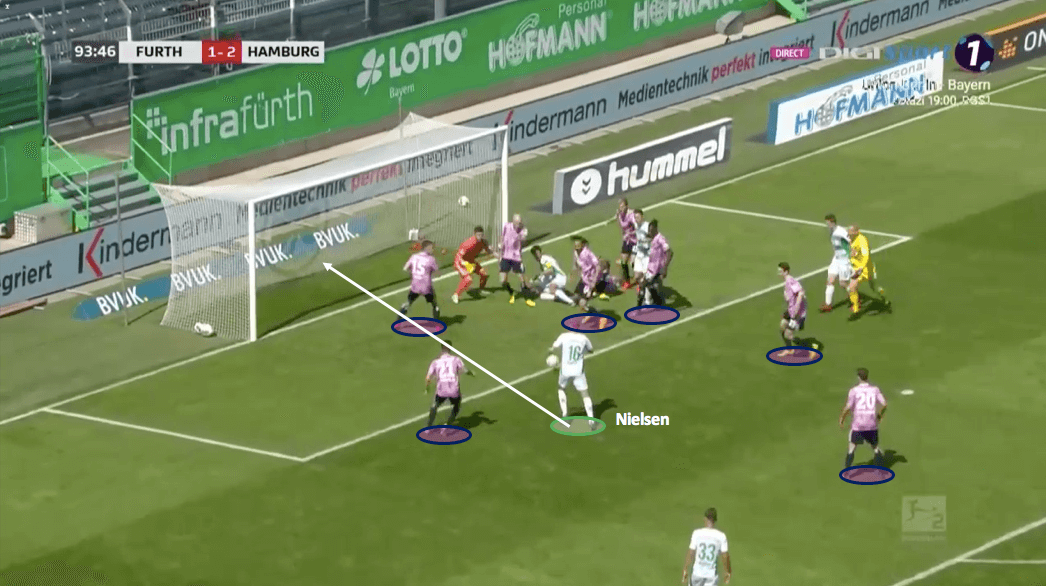 As the ball comes in, chaos pursuits and now it’s on the ground. Players are fighting to get it on goal or clear. Nielsen is highlighted, Leibold is closest to him, but there are six Hamburg players who in theory don’t have a man amongst all the drama. The ball pops out to Nielsen fortuitously, and he scores once more. The scrappy stoppage time can be challenging to analyse, but it can’t be helped that this situation could’ve been defended better. Nielsen shouldn’t have that much space; it also fits the agenda of Hamburg doing typically Hamburg things to drop a game they’d almost put away.

When it seemed all but assured that Hamburg had done enough, Fürth snatched a well-deserved point. As covered, Hamburg’s pressing to start the second half turned the tide in their favour after a lacklustre start. However, the narrative around Hamburg’s inability to defend crosses and corners was once again apparent. Fürth played a rather conservative game, yet when it mattered most, they came up large.

With nine games to go, Hamburg faces their two most significant tests. If promotion to become a reality, they must take points away from league leaders Arminia Bielefeld and the side they usurped second place from, Stuttgart. Fürth, on the other hand, will not play next weekend as their opponents Dynamo Dresden remain in quarantine.