Brothers Danny and Nicky Cowley have been on a remarkable journey together up the football pyramid since Danny took over as Concord Rangers manager in the Essex Senior Football League in 2007 whilst Nicky was still a player.

With Danny as manager and Nicky becoming his assistant (though really they work as a pair), the two of them secured three promotions in eight years at Concord Rangers, which was followed by a brief but impressive spell at Braintree Town in the National League in the 2015/16 season.

However, what they have achieved since joining Lincoln City in 2016 has been nothing short of miraculous. In their first season they were promoted to League Two as champions of the National League whilst reaching the quarter finals of the FA Cup. The following season they won the FA trophy and only missed out on promotion after losing in the 2018 playoffs.

They were to come back even stronger in 2018/19 though, being promoted from League Two as champions and taking the club into the third tier for the first time in 20 years. This tactical analysis will look at some of the tactical elements that contributed to the Cowley brothers’ incredible 2018/19 season. 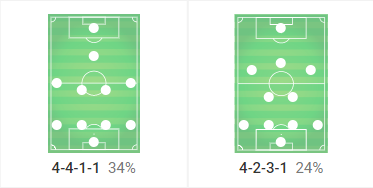 Lincoln tend to play in a 4-4-1-1 or 4-2-31 formation. In this system, the target man, normally John Akinde or Matt Rhead, is partnered by a deeper-lying forward who gets back to pick up the ball in deeper areas like loanees Danny Rowe or Shay McCartan.

Wing-forward Bruno Andrade provides plenty of flair from the left with his long-range goals, whilst Harry Anderson plays the role of a more traditional winger on the right as he looks to get to power forward and supply crosses from the byeline.

Danny Cowley doesn’t claim to subscribe to any particular tactical philosophy, preferring to adjust his tactics to the opposition and players available. This flexibility can be seen in their build-up play, which can consist of patiently playing out from the back or simply launching long balls towards the centre forwards.

In fact, Lincoln played it long 19.31% of the time last season, the highest percentage out of League Two’s top six teams. These are surprising statistics considering that you might expect the strongest team in the league to play a less direct style than their competitors.

When they play it long to the likes of top scorer John Akinde, one or two teammates will position themselves close to him in order to profit from any flick-ons or loose balls. Normally one of these players is positioned ahead of Akinde, ready to run at goal, especially in situations where one of the opposition’s centre backs has been drawn out to challenge Akinde, leaving space in behind to be exploited as we see in the image below.

When Akinde goes up to challenge for the ball, Lincoln’s defensive line steps forward, to around the half-way line. Here the central defenders are ideally placed to compete in the air for the second ball when Akinde is unsuccessful and the opposition head clear. Below we see an example from a game against Yeovil.

And it is clear why this mini round of head tennis suits Lincoln when you consider that centre backs Jason Shackell and Cian Bolger win 68.1% and 67.3% of their aerial duels respectively. Added to this, their high positioning means that the area of play is reduced to the opposition’s half, meaning that Lincoln have opportunities to press high and win the third ball in potentially dangerous areas close to the opponent’s goal.

Although Lincoln like to go long to the striker, they are also very much adept at playing the ball out from the back, an option which creates different scenarios for the opposition to deal with. One such scenario is whereby the Lincoln goalkeeper or defender feigns that he is going to play the usual long ball, causing the opposition markers to relax their press. These lapses in the opposition’s concentration can give Lincoln a vital split second’s headstart when initiating passing moves from the back.

In the images below we see an example of this as centre back Jason Shackell appears to be about to play a long ball up-field before eventually choosing the short pass to left-back Harry Toffolo. Completely taken in by the ruse, Morecambe’s number 17 turns his back on Toffolo.

But before he knew it, Toffolo had received the ball and was playing a one-two with midfielder Tom Pett to break free down the left.

In the next set of images we see an example of a classic ‘salida lavolpiana’, or, in plain English, a central midfielder slotting in between the two centre-backs to collect the ball and beat the press.

The midfielder in question here is Imps captain Lee Frecklington (circled in red), who comes deep to collect the ball just when it looked as if the goalkeeper was going to play it long. 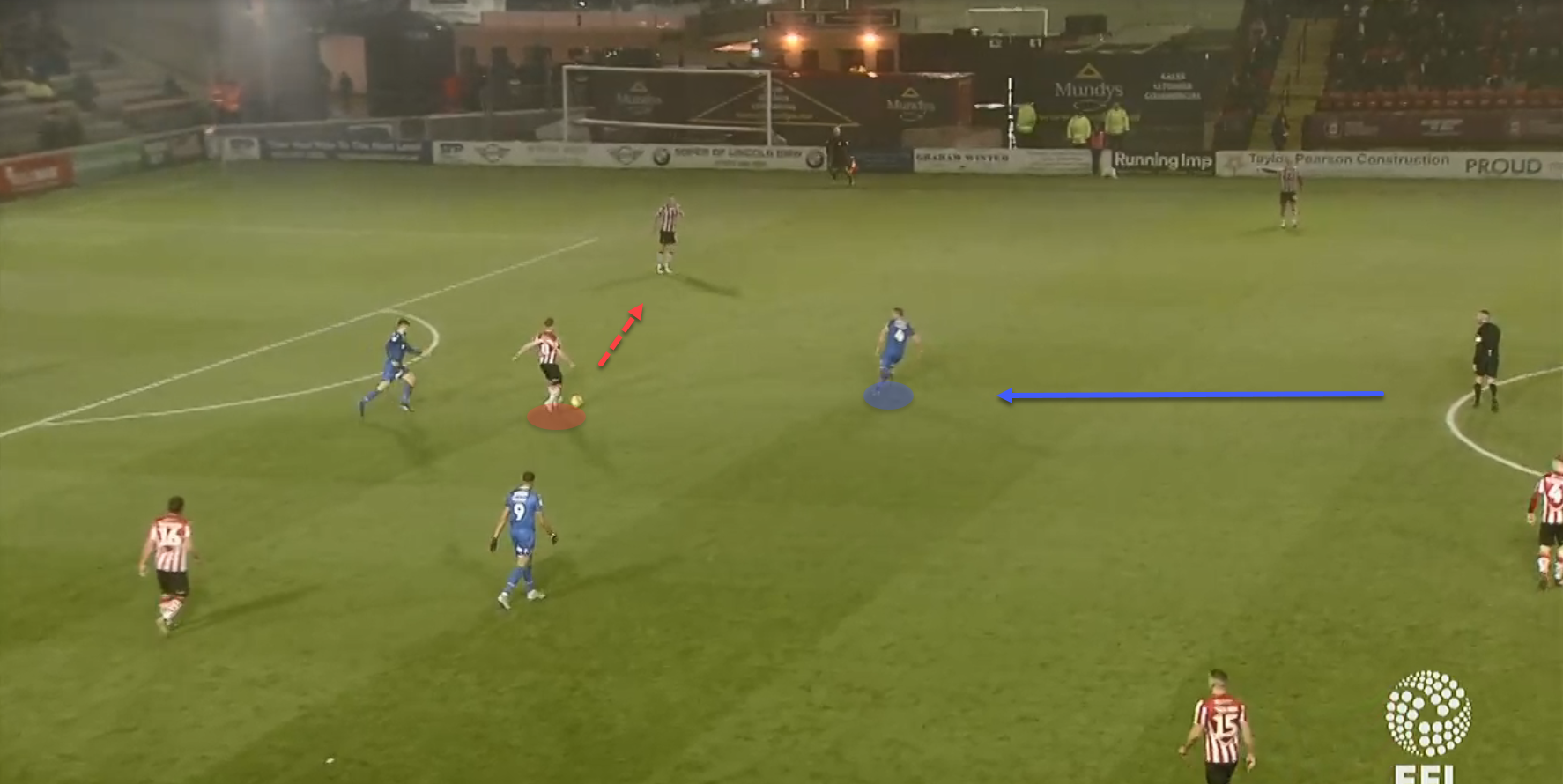 Frecklington has not only attracted the attention of the striker, thus freeing up the centre back to receive the pass, but he has also been followed by the Morecambe midfielder highlighted in blue.

The Lincoln centre back is able to pass to midfielder Tom Pett, who can now attack the space left empty as the Morecambe midfielder struggles to get back into position.

Unusually for a league-winning side, Lincoln do not have many players among the leading goalscorers or assists providers in the division. But when you look at where Lincoln’s goals and assists come from it is clear that the left flank is one of their strongest areas.

Portuguese left-winger Bruno Andrade has been one of Lincoln’s standout players, scoring ten goals second only to Akinde with 15. The winger possesses great pace and trickery and has built up a good relationship with left-back Harry Toffolo, who, together with Akinde, leads the Imps’ assists chart with six to his name in 2018/19.

The former Norwich player boasts a great deal of acceleration and this complements Andrade’s flair as they often combine in quick one-twos with either one releasing the other down the left flank as we can see in these examples. 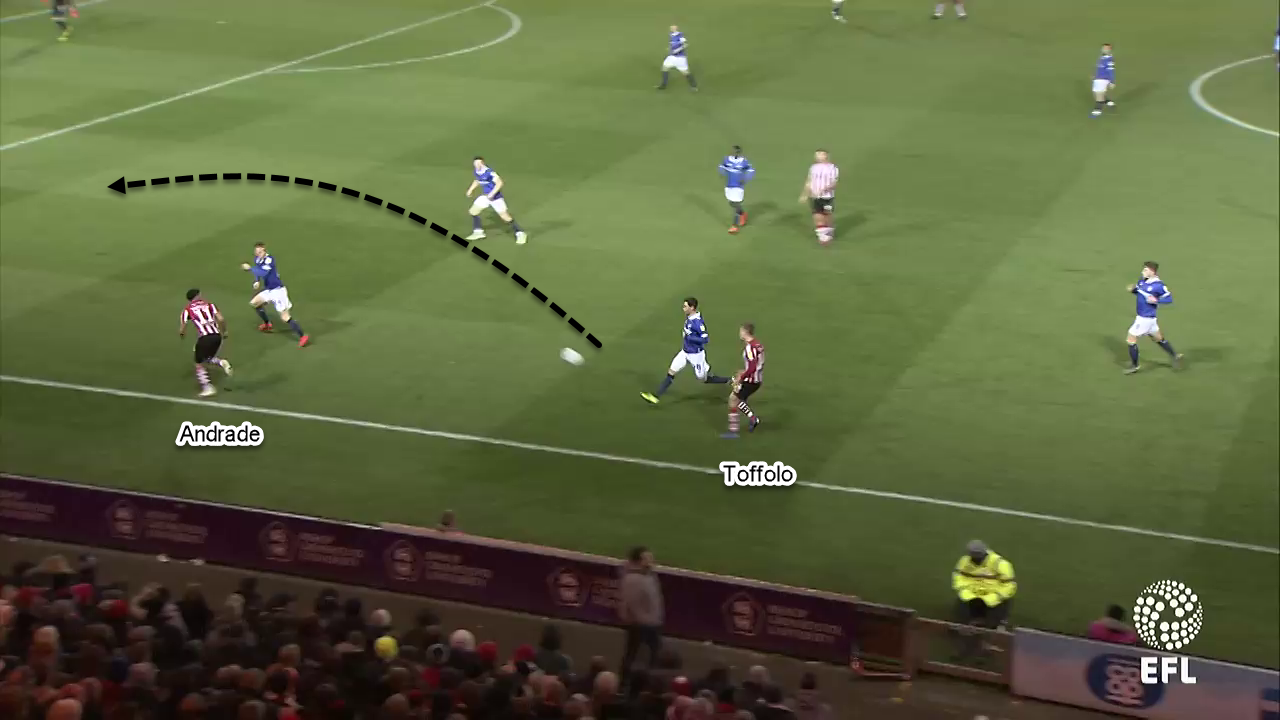 How do they play without the ball?

As already mentioned, Lincoln do like to press the opposition high up the pitch in order to win the ball back in dangerous positions or force them into making untidy clearances.

They don’t tend to apply this aggressive press in defensive transitions though. As we will see in this next passage of play from a game against Newport, Lincoln look to regroup and recover their shape when transitioning into defensive phases.

This requires a great deal of discipline and hard-work from Cowley’s players. Not only must they run back to recover their positions, but they also have to stay on their feet and resist the temptation of being drawn to the ball and closing down the opposition player in possession.

In the first of these three images from the Newport game, we say how right-winger Harry Anderson is somewhat out of position as he has stepped up to pressure the Newport central defender in a high press.

Newport beat the press, their number three initiates a counter attack and Lincoln’s players have to sprint to get back into a solid defensive position.

In this final image we can see that Lincoln have regrouped into their two blocks of four. Newport’s counter attacking threat has been extinguished, and with no forward passes available, they are forced to play it backwards. McCartan didn’t need to win the ball, all he had to do was get into the right position. 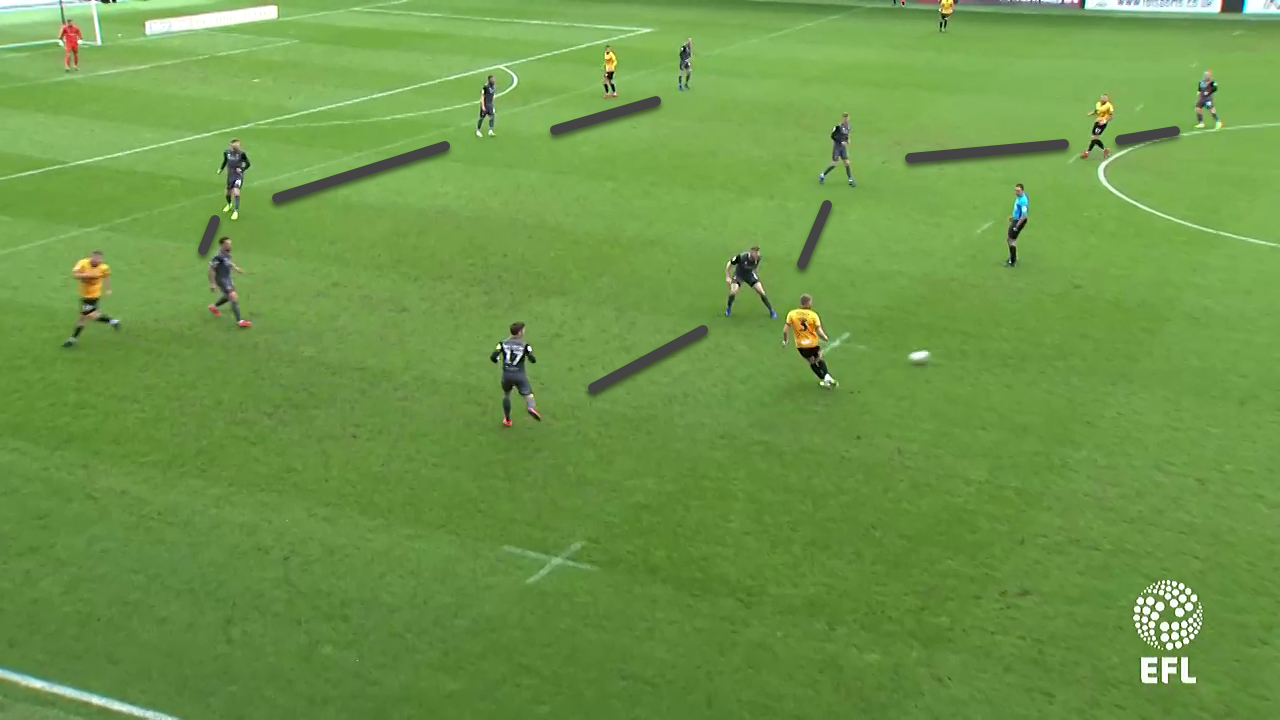 With a side built upon the foundations of attacking intensity and defensive organisation, it appears that once more the Cowley brothers have formed a team that is more than just the sum of its parts.

There will inevitably be changes in personnel over the summer as the club prepares for next season in League One. But for Lincoln the most important objective will be to convince the manager that they can match his ambition and start planning for the next project of gaining promotion to the Championship.