With the Scottish Premiership kicking off in just a matter of days, clubs have been busy making further additions to their squads ahead of the 2022/23 season.

In this data analysis, the second in a series of two pieces, statistics for three more of the biggest signings from the Scottish summer transfer window will be analysed to see what they will bring to their new clubs and where they will fit in.

The data for each player’s chart is retrieved from Wyscout, and Python is used to convert their per 90-minute numbers from last season into percentile ranks against others in those leagues. The percentile ranks are then presented in a pizza chart to visualise their performance across key metrics including attacking, possession and defending. 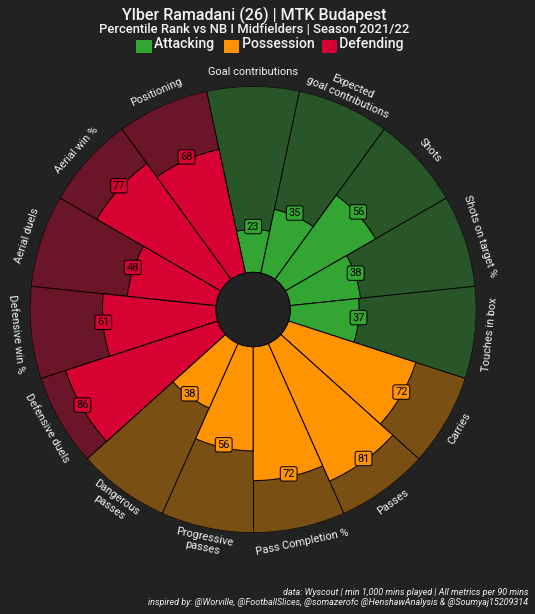 It’s been a busy summer of comings and goings at Aberdeen as manager Jim Goodwin reshapes the squad in his first transfer window at Pittodrie.

The Irishman, who replaced Stephen Glass in February, could not prevent a bottom-six finish last season but has made some exciting signings as he looks to revive the Dons’ fortunes.

Goodwin has reinvested the sizeable transfer fees received for talents Calvin Ramsay and Lewis Ferguson in eight new players so far this summer.

Jayden Richardson (Nottingham Forest), Anthony Stewart (Wycombe Wanderers), Callum Roberts (Notts County), Kelle Roos (Derby County) and Hayden Coulson (Middlesbrough) have all been brought in from the English market while defender Liam Scales has been signed on a season-long loan from Celtic.

They have been casting the net further afield too with the signing of Benfica B striker Luis ‘Duk’ Lopes and a double signing from Hungarian side MTK Budapest in the shape of attacker Bojan Miovski and midfielder Ylber Ramadani.

Despite their season in Hungary ending in relegation, both Miovski and Ramadami look like they will play key roles for Goodwin this coming season with the 26-year-old Ramadani brought in to replace some of the midfield presence lost following Ferguson’s move to Serie A.

Born in Germany, and capped at youth level for Kosovo, Ramadani comes with plenty of international pedigree and was involved in Albanian’s most recent squad for the UEFA Nations League.

A combative midfielder, he can play as both a holding midfielder in a ‘6’ and as a box-to-box ‘8’. So far in pre-season, Ramadani has slotted into one of the two deeper midfield roles in Goodwin’s preferred 4-2-3-1 formation, a formation Ramadani also played last season in Hungary.

Looking at his percentile rank pizza chart from last season in Hungary, we can see his defensive strengths coming through. He was active in defensive duels with 8.8 per 90 and has an above-average rank for his success rate in them, 59.92%. He was not as involved in aerial duels, 2.97 per 90, but he ranks above average for his win percentage in those too, winning just under half (49.4%).

He also boasts an impressive rank for positioning, a combination of possession adjusted (PAdj) interceptions and shots blocked, completing an average of 6.32 per 90 of the latter and 0.31 per 90 of the former.

He appears secure in possession, playing an average of 46.11 passes with a completion percentage of 83.88%. He ranks below average for progressive passes and dangerous passes, a combination of key passes per 90 and through passes per 90. However, given his deeper midfield role, we probably wouldn’t expect to see high ranks in these metrics. That said, he did attempt 0.93 through balls per 90 which, given he was used in a deeper role, is not bad at all.

He looks to be a decent ball carrier too, ranking just under the 75th percentile for carries, a combination of dribbles and progressive runs – he averaged 2.66 dribbles and 1.35 progressive runs in the Hungarian top-flight last season. This means that Ramadani can help his sides to access higher areas of the pitch.

Coming from a market not many Scottish teams have looked to before, it will be intriguing to see how Ramadani, and Miovski, settle in the North East. 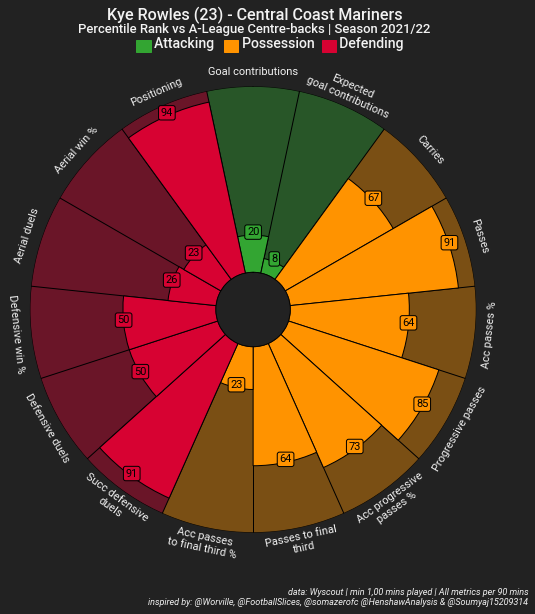 However, they have lost one of their key performers with centre-back John Souttar signing for Rangers on a free at the end of last season.

To replace Souttar, Hearts have dipped into a market they, and others in Scotland, have been increasingly turning to over the last few years, Australia’s A-League.

23-year-old Australian international Kye Rowles has been brought in from Central Coast Mariners, following Nathanial Atkinson and Cammy Devlin in making the move from down under to Scotland’s capital.

Although not a like-for-like replacement for Souttar, left-footed Rowles has plenty to offer and could provide a good balance to Neilson’s back three in Hearts’ preferred 3-4-3.

Looking at his defending section first, Rowles has some impressive numbers with his average of 9.92 successful defensive actions per 90 minutes, the fourth most of all centre-backs in last season’s A-League.

He also ranks highly for positioning, with his 8.42 PAdj interceptions per 90 the third highest of all centre-backs in the A-League last season and his 1.1 shots blocked per 90 the fourth most.

His defensive duels (4.39 per 90) and win rate (61.67%) see him rank at the 50th percentile mark for both. Aerially there may be a concern, he was involved in an average of 3.04 per 90 but it is his rank, below the 25th percentile, for his success rate (51.81%) that may be an issue. He is likely to come up against more physical attackers and more direct opponents in Scotland than he did in Australia so this may be an area he will need to improve as he adapts to life in the Premiership.

Looking at his possession ranks, he appears to be capable of stepping out of defence and helping in the build up play, attempting an average of 10.69 progressive passes per 90, with a 74.66% accuracy percentage. He tried an average of 63.49 general passes, one of the most of all A-League centre-backs per 90 and although his overall accuracy rate of 90.25% sees him rank lower for that metric, this will be down to him attempting these more progressive, line-breaking passes.

He also looks to execute ball progression for his sides through carrying, as well as passing, with a decent rank for his combined dribbles (0.4 per 90) and progressive runs (1.24 per 90).

Another promising export from the A-League, it will be interesting to see if he can follow in the footsteps of his national compatriots, Atkinson and Devlin, in making a significant impact for Hearts in the Scottish Premiership. 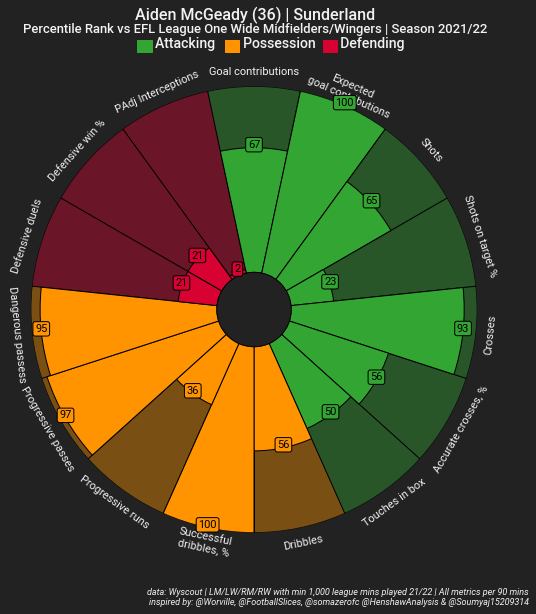 Across the city from Hearts, capital rivals Hibs have been the most active Scottish Premiership club with 11 incomings at Easter Road.

Arguably the highest profile of those signings in Leith has been the arrival of former Celtic, Everton and Sunderland attacker Aiden McGeady.

The maverick winger returns to Scotland’s top-flight over a decade after he left his boyhood heroes Celtic for Spartak Moscow in a £9.5 million move, a transfer that made him the most expensive export from Scottish football at the time.

Although injury interrupted a large chunk of his last season at the Stadium of Light, he only managed a total of 1,030 league minutes, the former Republic of Ireland international put up some good numbers for the EFL League One side.

Looking at the rest of his attacking numbers, he attempted an above-average number of shots per 90 for a wide midfielder/winger in EFL League One (1.8) but was below the 25th percentile for his shots on target percentage, 28.57%. He ranks highly for the number of crosses attempted per 90 last season, 4.29, with an above-average accuracy percentage of 30%.

Looking at his possession ranks, McGeady, unsurprisingly, stands out in the dribbling metrics. His 5.31 dribbles per 90 were above average for a wide midfielder/winger while his success rate (67.74%) was the best in the league for a player in his position.

His creativity shows in other metrics in the possession section too, with ranks above the 90th percentile for both his progressive passes and dangerous passes. For dangerous passes, he attempted the most key passes of all his league counterparts, 1.03 per 90 while he also attempted 0.86 through passes. His 6.43 progressive passes per 90 were the second most for a wide midfielder/winger in England’s third-tier last season.

Defensively, as perhaps would be expected, McGeady ranks below the 25th percentile rank for all three metrics included in this chart.

McGeady’s low-minute total should be considered as some of his numbers may not have been scalable over a full season. However, they are still impressive and should translate well enough to Scottish Premiership standards.

Should he stay relatively injury-free, even at 36, McGeady looks like he still has the quality to be an important player for new Hibs manager Lee Johnson this season.

In this data piece, which was the second of two analysis articles, we have looked at three more of the most interesting signings in the Scottish Premiership this summer.

Again, we have seen more evidence that Scottish clubs are becoming smarter with their recruitment, and the role data can play in identifying the exact profile to fit their playing systems.

It will be interesting to see which one of this summer’s signings goes on to have the biggest impact in this season’s Scottish Premiership.