In recent years we have witnessed a significant decrease in top-level sides playing formations which have the traditional number 10 role, and instead, many clubs have been looking for hybrids between a number 8 and a number 10. The reasoning behind this is that with the game constantly evolving, it is difficult for teams to play a player who is only involved with the ball at his feet. Given the current economic situation in football, every club will be looking for bargains and free agents in the summer, and so, through this data analysis, we will highlight some creative midfielders who are worth less than €1 million and could be interesting for teams looking to strengthen in midfield.

It is not rare to find some gems in the less popular leagues but sometimes it is difficult for clubs to cover all the relevant leagues. However, with the use of data, it is easier to find players who have performed well in a certain time span based on their statistics. In the next section, we will explain the methodology behind this piece before revealing our selections for potential bargains in the creative midfielder department.

The Wyscout dataset we have used contains players whose main position is either as defensive midfielder, central midfielder or attacking midfielder. We have only included players who have played at least 800 minutes this season and were born after 1993. As we mentioned earlier, we have only taken those under consideration who are worth less than €1 million on Transfermarkt. Of course, given the filters, the top leagues like the Bundesliga or the Premier League are not represented here, but the likes of the Turkish Süper Lig, Croatian 1.HNL and so on have some interesting players to watch out for. Based on our criteria, we compared 454 players and shortlisted five of them who stood out in the majority of metrics we evaluated. Each highlighted player will be supported with a dashboard that will show us how he looks compared to the other players in the dataset. The second visual for each highlighted player will be his creativity map which will show us the location of his assists and successful key passes this season on the pitch. 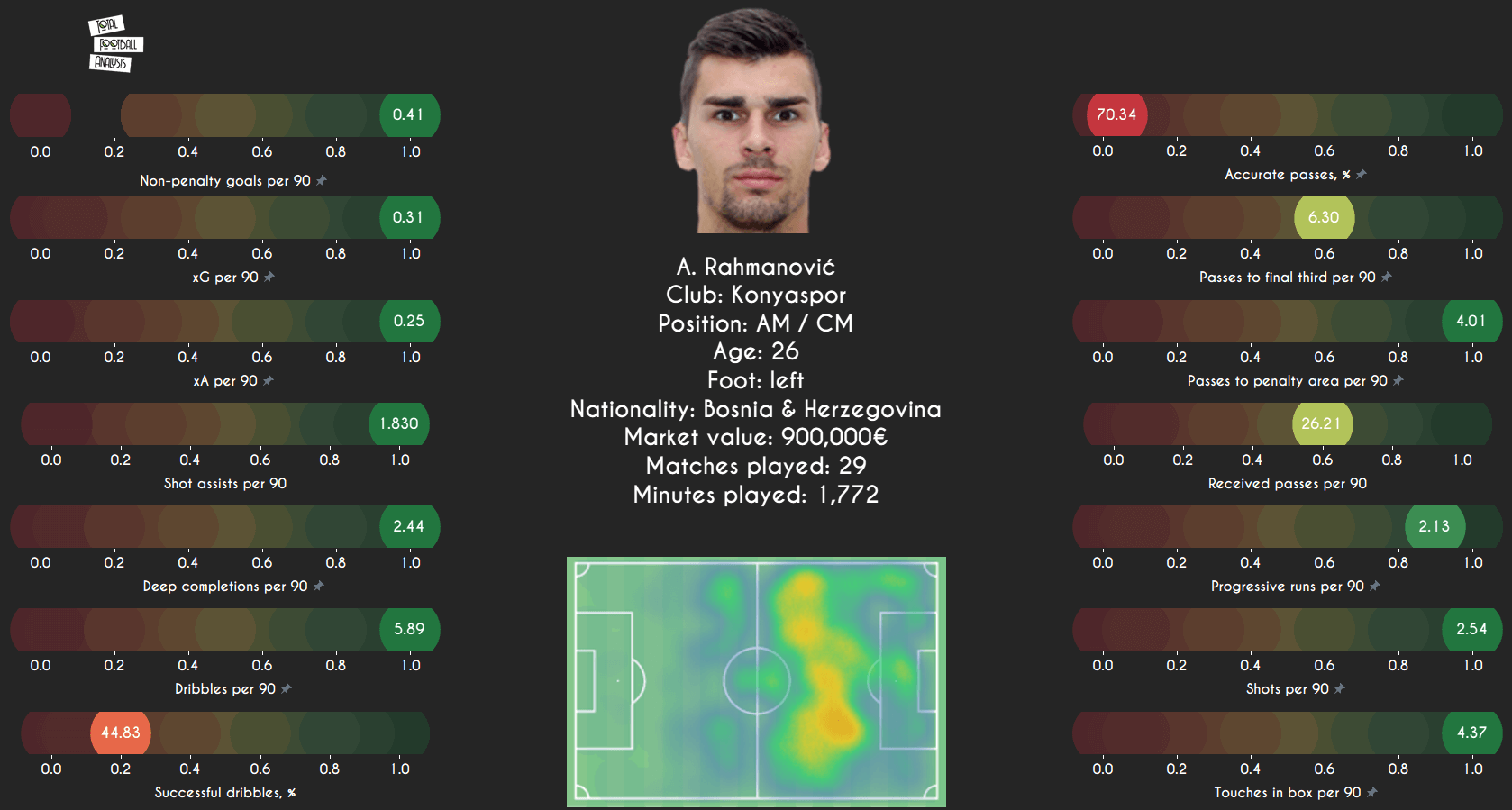 Amar Rahmanović is a Bosnian offensive midfielder who plays for the Turkish Süper Lig side Konyaspor. It has taken him a lot of seasons to prove his worth and FK Sarajevo were his 9th club, but it was there that he started playing consistently at a very good level which led to his transfer to Konyaspor. Rahmanović is 192 cm tall and he is a player who looks elegant on the pitch with the ball at his feet. He operates mostly as a number 10, but has the quality to play in deeper roles when needed. However, playing behind the striker brings the best out of him as his vision and ability to facilitate come to the fore. Just by looking at the dashboard above, we can see how advanced he is in terms of creative metrics, landing in the top percentiles for most of them, but he has also shown that he is very dangerous based on the number of touches in the box, shots and xG per 90 as well. 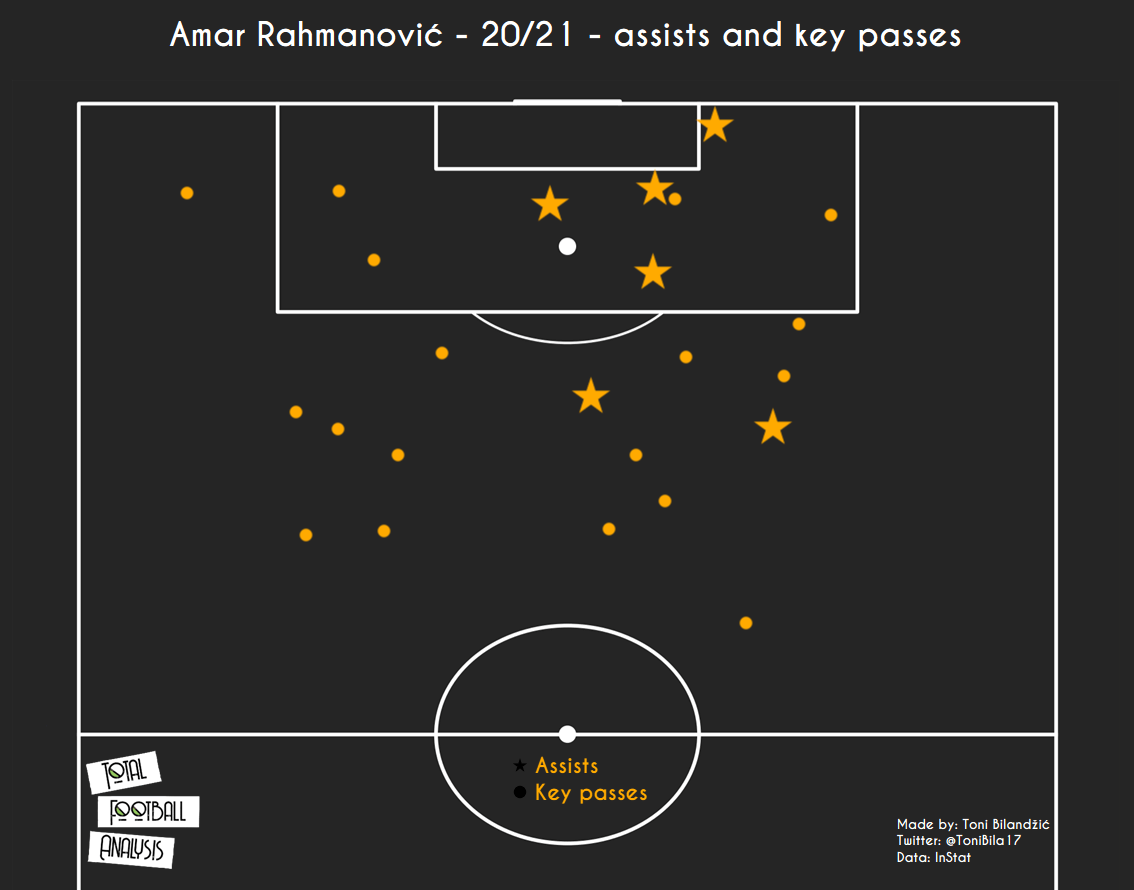 It is clear that Rahmanović is able to create from anywhere on the pitch, but if we had to highlight one area it would be the left half-space where he feels most comfortable. From there, Rahmanović is able to use his favoured left foot during transitions to set up chances against unstructured defences. His weight of pass is also impressive, whether playing passes with the inside or the outside of his left foot. Rahmanović is still adapting to a new league and club, but if he manages to replicate his performances from Sarajevo it won’t take long till he is a crucial part of the starting XI at Konyaspor. 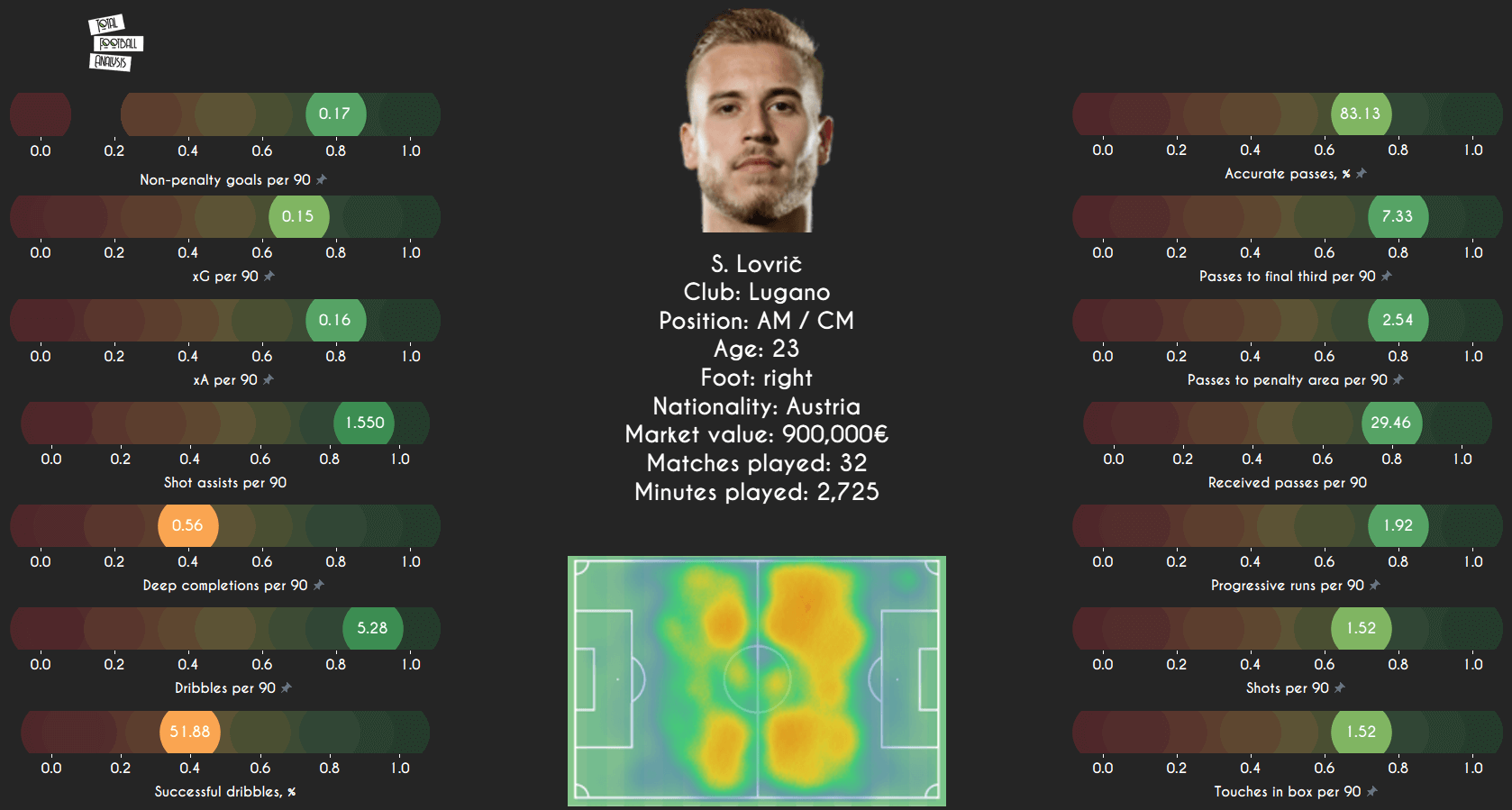 Sandi Lovrič is a 23-year-old Slovenian international who currently plays for Lugano in the Austrian Bundesliga. Lovrič is a hybrid between a number 8 and number 10, with his physical attributes allowing him to play multiple positions, and his versatility is surely one of his strengths. He has been used across midfield and on both wings this season, but was largely used as an attacking midfielder. His work rate is impressive and he covers a lot of ground which can be seen on his heatmap as well. Lovrič has created a lot of chances from set-pieces for Lugano this season, which is one of the reasons for his strong creative numbers. 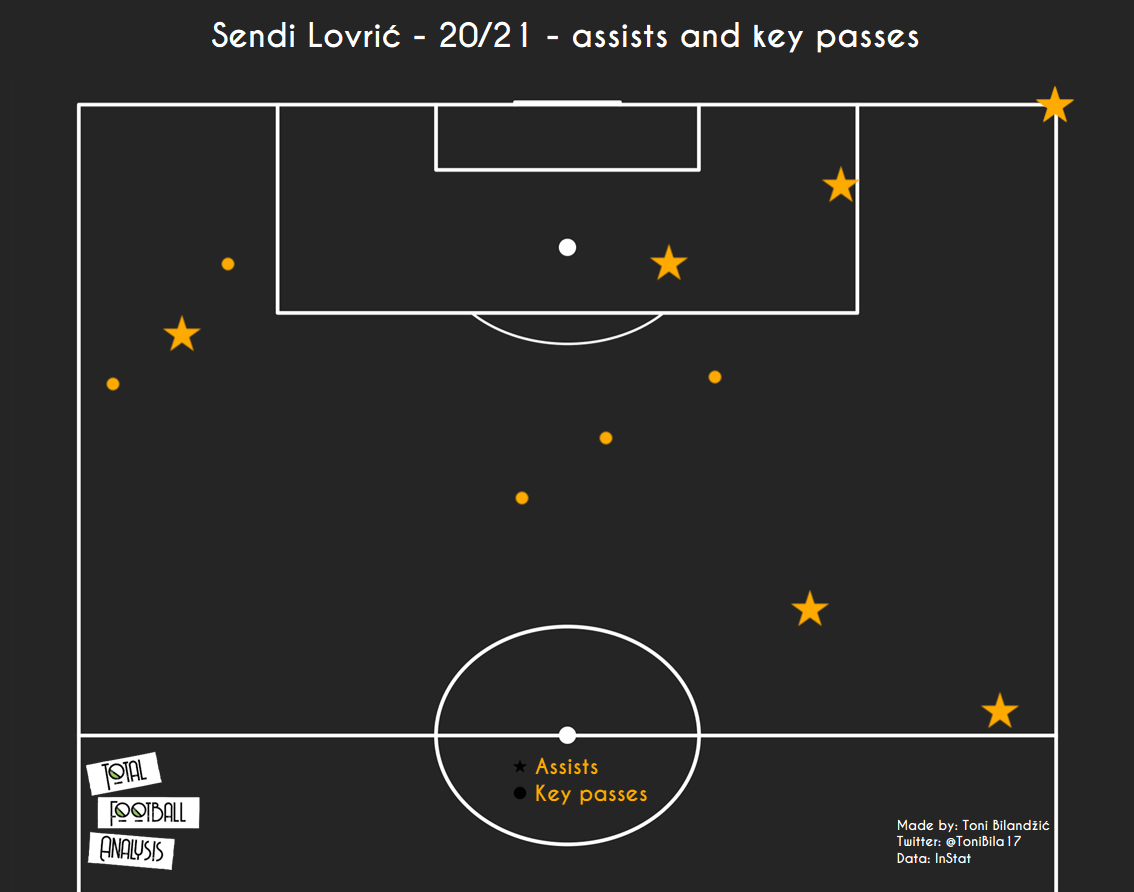 What Lovrič does well is creating an overload on the flanks which leads to crosses. He is a fairly good crosser which is an important attribute for many teams which look for their central midfielders to be able to hit early crosses from the half-space. He has also notched two assists and has had one shot assist from the right corner which shows his ability from set-pieces. Given his skill-set, he can also threaten during transitions and create promising opportunities through progressive runs before passing to the forwards. Compared to the other highlighted players he has the least number of key passes, but he has a lot of room to improve in that area. Given the fact that he is part of the starting XI for the Slovenian squad and that he is still young, he has the highest ceiling of our five highlighted players. 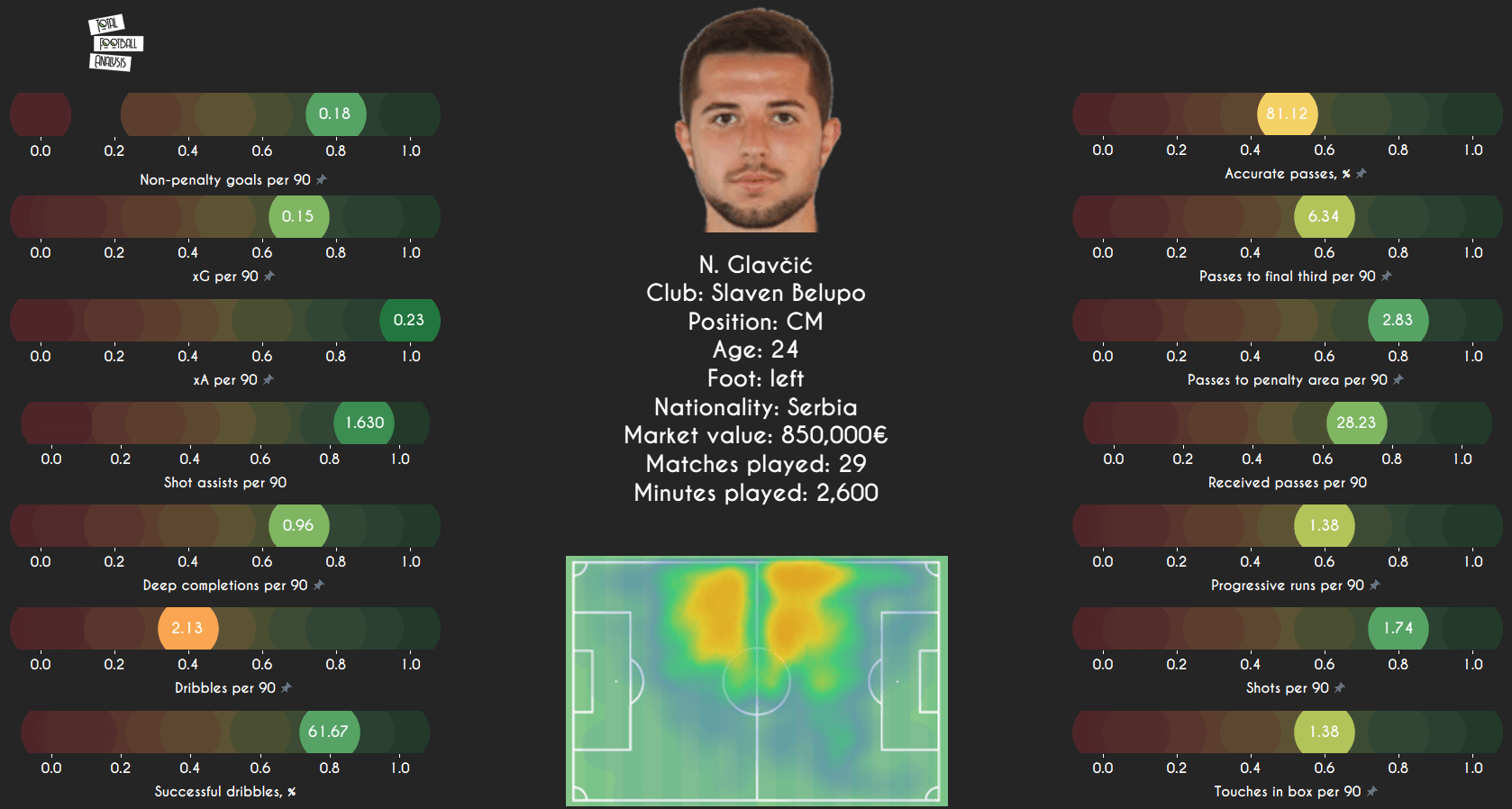 Nemanja Glavčić is a Serbian midfielder who plays for Slaven Belupo in 1.HNL. This 24-year-old left-footed midfielder is having the best season of his career, having scoring five goals and assisted seven times in 2600 minutes in the league. He came through the Partizan youth academy and was one of the most highly-rated prospects at the club, but his development stalled somewhat when he went out on loan, and he left Partizan permanently in 2017. Last season, he performed well in what was his debut season for Slaven Belupo, but he was also unlucky, creating a lot of chances that his teammates failed to finish, and thus he ended the season with only one assist. Glavčić is a number 8 who has more offensive than defensive qualities. We can see on the heatmap that he is comfortable drifting wide to the left side on his stronger foot. His tight ball control and precise left foot are his best technical qualities which combine well with his creative mindset. We can see that he is in the top tier when it comes to xA per 90 and shot assists per 90 which is exactly what we are looking for in this analysis. 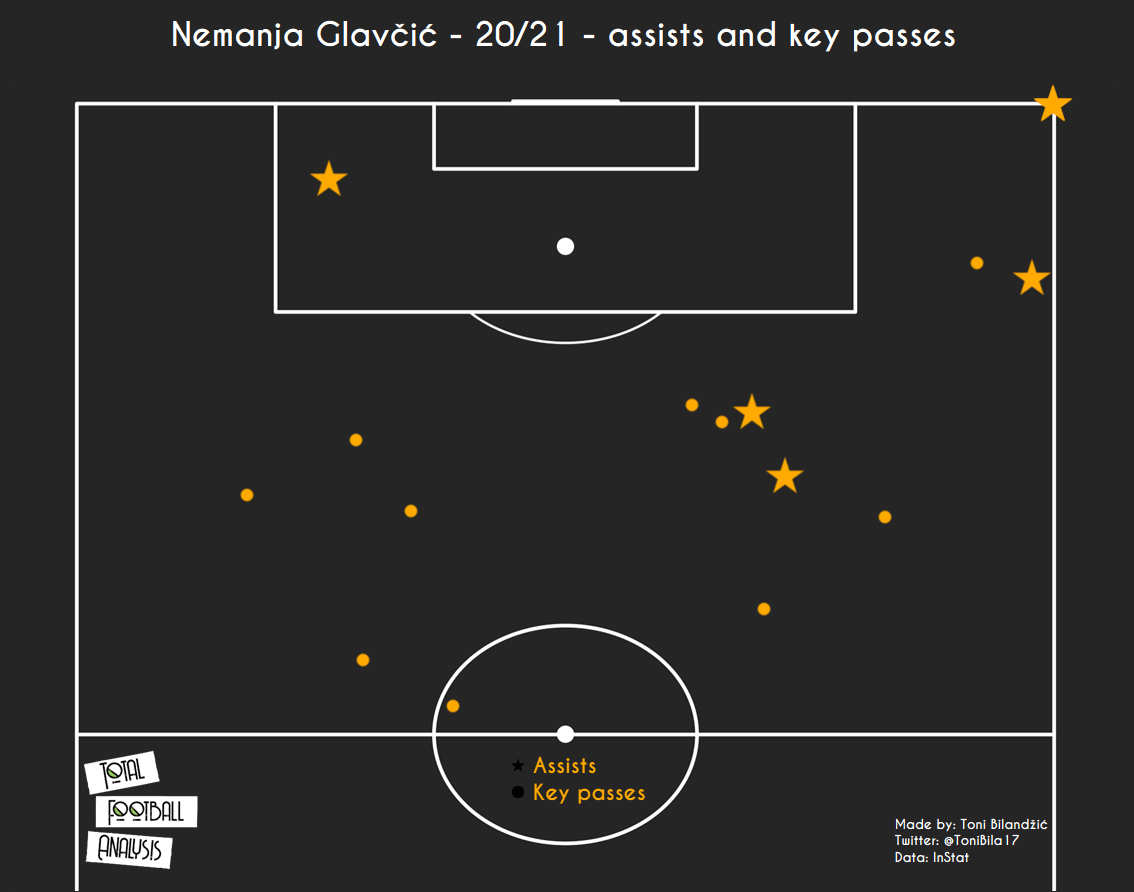 Glavčić is a dead ball specialist and has five assists from set-pieces this season while two of them have been from open play. Three assists came from the right corner which shows that his inswinging corners are a real threat. Most of his key passes originate in the middle and final third, usually from the half-space. Even though he creates a lot for his teammates he also has a tendency to shoot when close to the penalty area which is the reason why he does not have many key passes from around the penalty area. Belupo has extended his contract till 2022, but it will be hard for the team to keep him for the next season after this season’s strong performances. 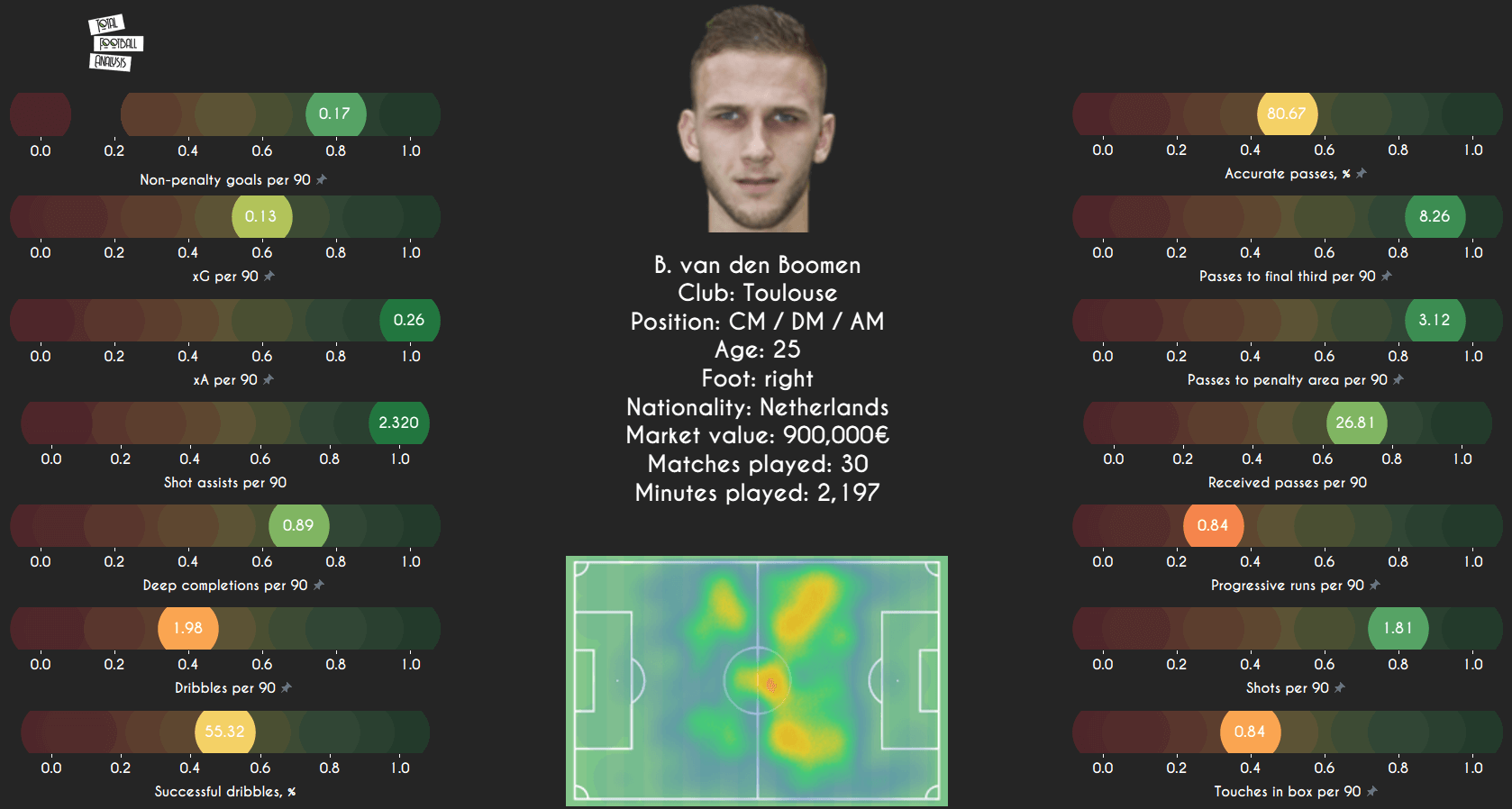 Branco van den Boomen is a product of one of the biggest academies in the world, Ajax. However, it can be said that he did not progress as they would have expected, in a similar situation to that of Glavčić and Partizan mentioned above. However, the 2018/19 season was the turning point for van den Boomen, where he managed to have 11 goals and 14 assists in 3171 minutes for FC Eindhoven in the Keuken Kampioen Divisie. Last season was another productive season with five goals and 10 assists which was enough for Toulouse to buy him this summer. This season he has shown some very good performances in Ligue 2 and given the current situation in the league standings, it will not be surprising if we are watching him in Ligue 1 in a Toulouse jersey next season. We can see on his heatmap that he leans towards the left side of the pitch playing as an LCM in a 3-5-2 most of the time, but he has sometimes also been used as a number 6 or a number 10 in different variations of that formation. His data on the dashboard shows us that he is a very creative player who makes a difference with his passing ability, but his passing accuracy also shows that he is not afraid of taking risks more often. 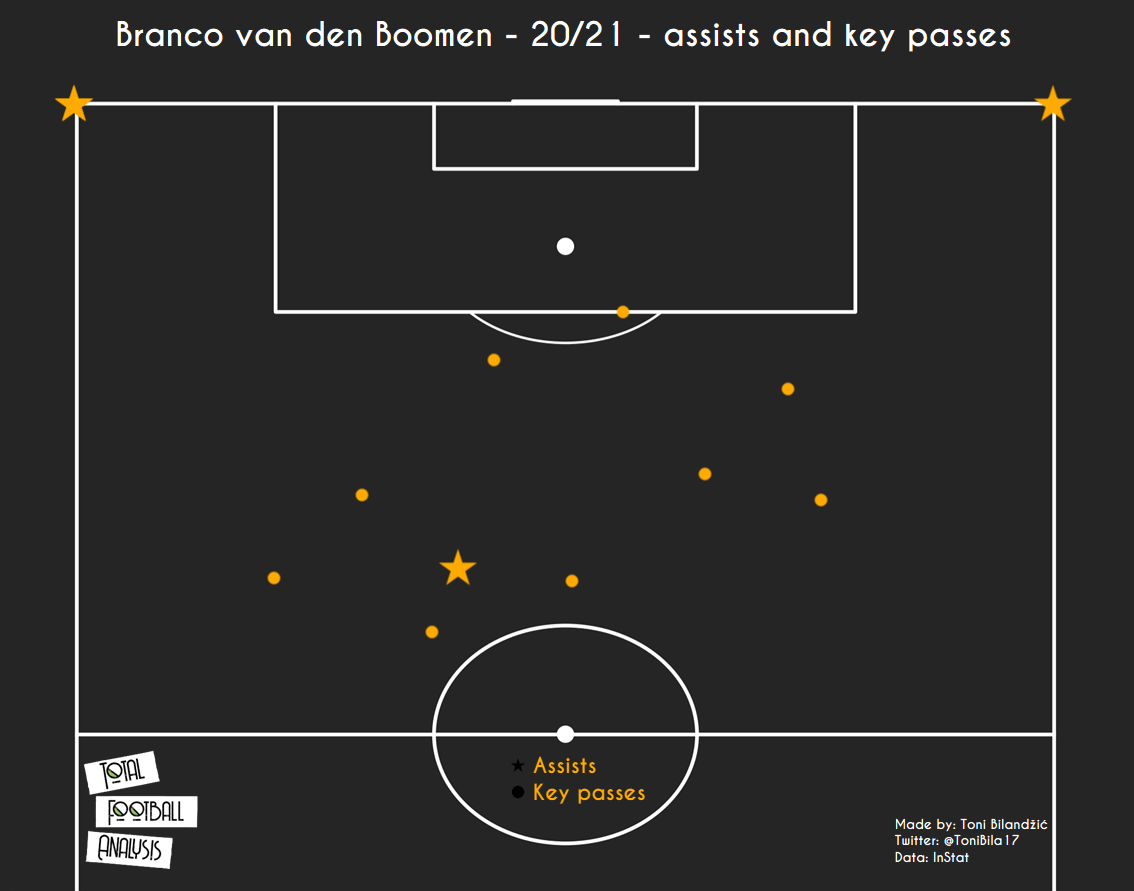 Van den Boomen is a threat from set-pieces, with three assists from corners so far this season. However, he has showed that he is more than a dead ball specialist, often breaking down opposition defences with through passes for his teammates. It looks like he is a late bloomer who is now adjusting to the pace of senior football, while his technical qualities were never in question since he is a product of the Ajax academy. Toulouse managed to get a quality midfielder for a bargain at €350k last season and while they may choose to cash in on him, it would be interesting to see him at a higher level next season, whether with Toulouse or a different club. 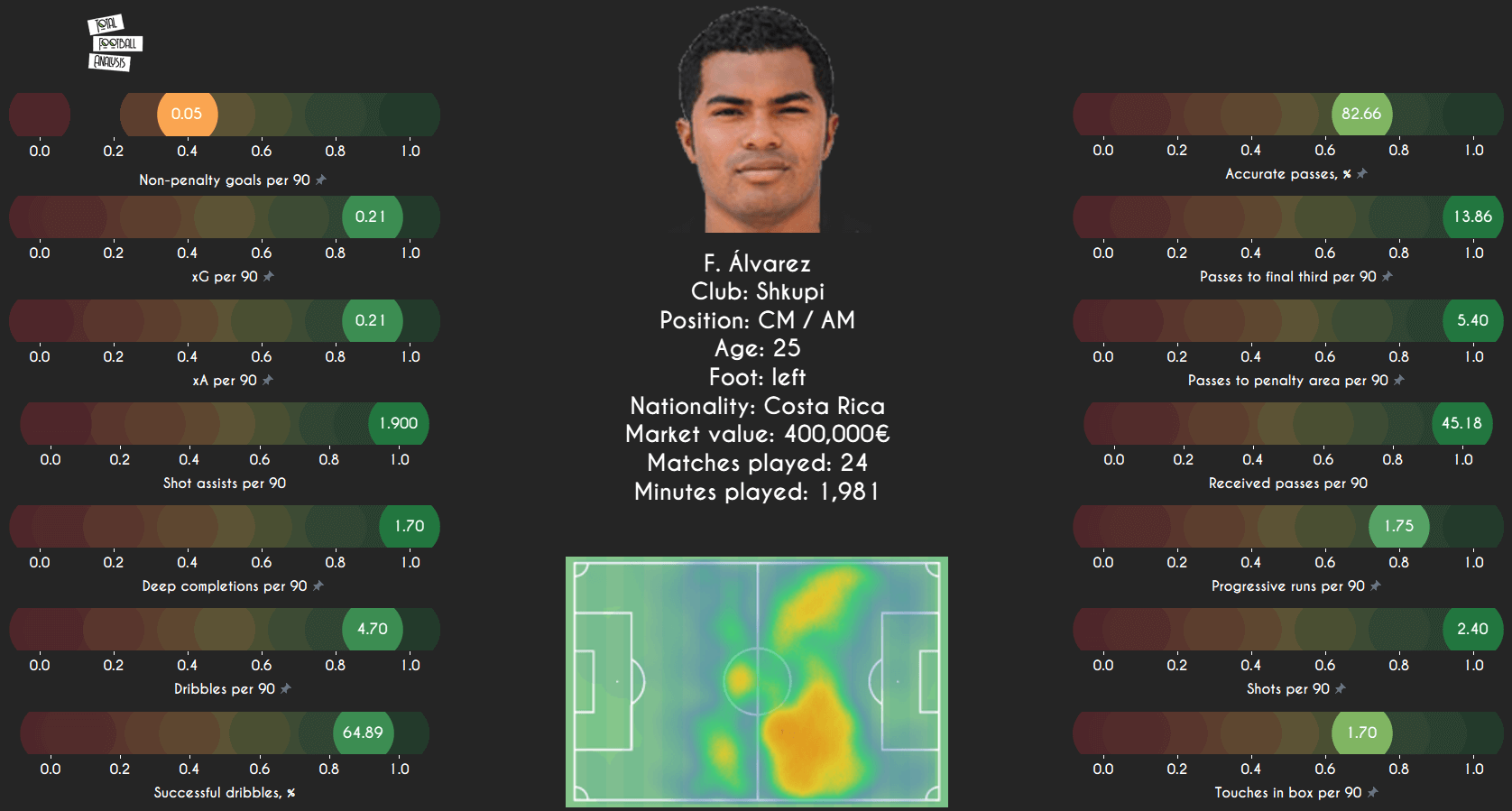 Freddy Álvarez is a 25-year-old central midfielder who currently plays on loan at the North Macedonian Prva Liga side Shkupi. Álvarez is on loan there from the Costa Rican first-tier team ADR Jicaral. He is playing in a lower quality league than the others in this shortlist, but he is also cheaper than the others and could be a bargain for European clubs in slightly better leagues.

What is impressive for Álvarez is his off the ball movement where he is able to show his ability to think one step ahead of his opponents. His technical qualities are very good and he is a quality set-piece taker as well. On his heatmap, we can see that he likes to drift wide and mostly operates in the opponent’s half. Looking at his creative metrics we can see that he is not only a great facilitator but that he can also make an impact with his dribbling and progressive runs. Álvarez tends to shoot often and has a powerful shot. 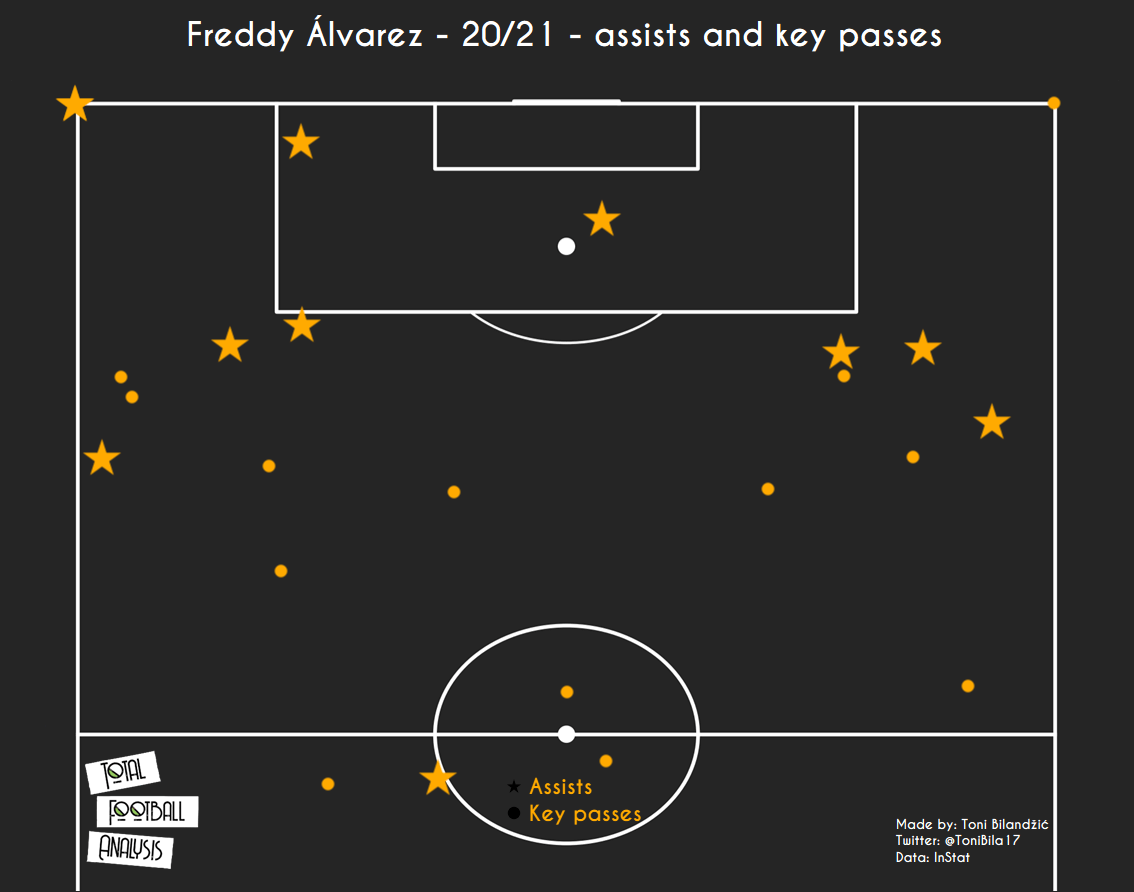 We can see that his creative passes come from all over the field and it is impressive to see many quality passes coming from around the halfway line. Álvarez’s ability to see space before he receives the ball is the reason why he is so creative and he does not hesitate to attempt a killer pass when he has the opportunity to do so. What lets him down the most and is probably a reason why he does not play at a higher level are his physical attributes. However, this ex-Costa Rican youth international’s first season back in Europe looks to be very good so far and he has the most assists in the league so far this season. It is difficult to predict whether he will stay in Europe next season or go back to his home country, since it looks like he has something to offer if he manages to play in a better league than the North Macedonian Prva Liga.

All the midfielders we mentioned in this analysis are showing very strong performances from a creative aspect, but given the level they play at, it is certain that there are areas where they need to improve. However, clubs with limited budgets and those hit by the ongoing economic situation will be looking to find bargains this summer, and these creative midfielders all could be ready for the next step in their career.