Athletic Club are certainly a club of their own. They are deep-rooted in the history, the pride and the passion of the people of the Basque Country. Needless to say, the policy of allowing only players born in the Basque Country or who learned their football skills at a Basque club to be part of the team is a unique, seemingly uncontemporary, testament to their philosophy. The academy has always been central to the strategy and the fortunes of this club.

On the pitch, this year’s squad is filled with three exciting young players who are helping Marcelino’s collective to achieve a top-half finish together with a possibility to compete for silverware in Copa del Rey. Oihan Sancet and, lately, Nico Williams are emerging as important components for Los Leones. The newest generation is also represented by Nico Serrano, an 18-year-old who just entered the scene to make things look even more promising in the near future.

Oihan Sancet is certainly one of the brightest products of Athletic Bilbao’s academy. Born in 2000, 188 cm tall and 75 kg of weight, he is often deployed as a second striker in a 4-4-2 but he is also able to play as an advanced midfielder. Despite a tough injury (cruciate ligament rupture) early on in his career, he gained consistent playing time over the last two seasons, making his debut aged 19 against Barcelona in August 2019. In the current season, he has become an integral part of Marcelino’s setup: he started in 11 of 20 matches in which he was available but also managed to offer an instant impact coming from the bench as well.

The pinnacle of his season thus far has been the hat-trick scored away at Osasuna in the first match of 2022, though he has recently found the net with more regularity having scored all his 6 goals in La Liga this season in his last 6 games played, including goals against Real Madrid and Real Sociedad in the Basque derby. 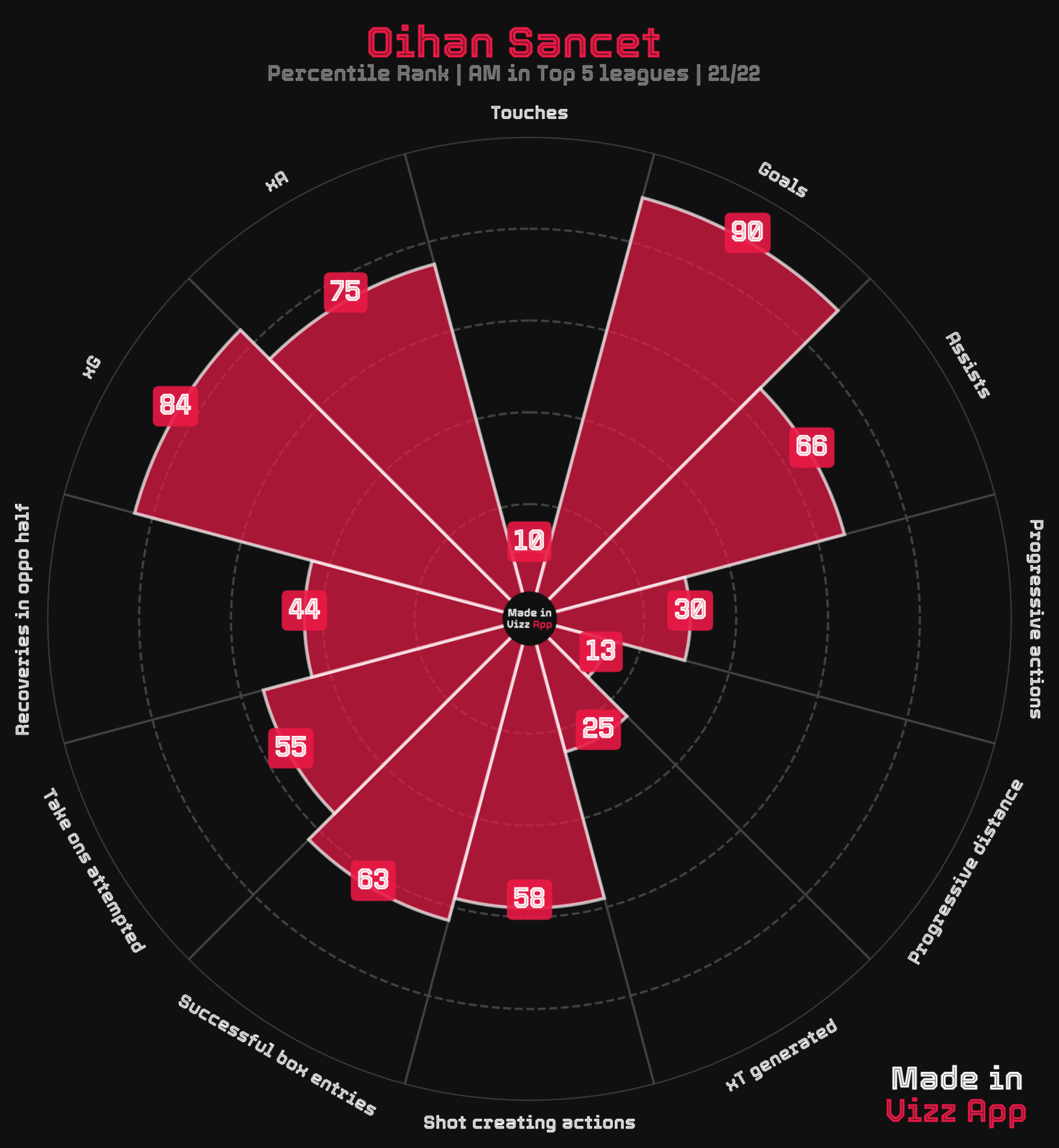 Despite being an offensive-minded player, the most significant aspect of Sancet’s playing style is his unique all-round ability. He is an atypical attacking midfielder with the physique of a centre-forward, the vision of a technically skilled midfielder and a good eye for goal. Thanks to this versatility, he comfortably partners up with a striker who likes to attack the space in behind the defence (Inaki Williams in Marcelino’s 4-4-2) or he can also be an option as an attacking midfielder of an offensive 4-2-3-1.

Sancet is in fact particularly effective when receiving the ball between the lines, shielding it with a mix of body strength and good ball control under pressure to link up play with the wingers and his attacking partner. He creates an average of 3.57 shot-creating actions per 90 minutes compared to an average of 2.65 for attacking midfielders and forwards in La Liga. Adding other stats, in terms of xA (0.17 p90) and touches in the box (6.18 p90), proves as further evidence of his excellent offensive contribution. His technique is superb even when closely marked: he is comfortable with both feet and can quickly shift direction without losing spatial awareness and maintaining great balance. When he lays the ball to one of his teammates, his immediate aim is to get into the penalty area with outside runs and spot pockets of space. When he finds himself in a position to release a shot, he shows striker instinct and good ball shooting technique, both in and outside the box. One to watch for any defender in La Liga.

Nicholas Williams, known as “Nico”, is the younger brother of Iñaki, Athletic Club’s centre-forward since 2014. Exactly like his 8-year older sibling, Nico was born in the Basque region, in the city of Pamplona (Iñaki was born in Bilbao) from Ghanaian parents, therefore being “eligible” to play in the Los Leones. After a brilliant rise through Athletic’s academy, Nico Williams has joined his brother in the first team of the glorious Basque club, making his debut at the end of the 2020/21 season.

Nevertheless, the young Nico has demonstrated he can make a name for himself, gaining precious playing time and entering in Marcelino’s rotation consistently since the start of the current season. He plays as a winger, able to play on both sides of the pitch, although he has been mainly utilised on the right flank, to give pace and width to Athletic’s 4-4-2 with double pivot. 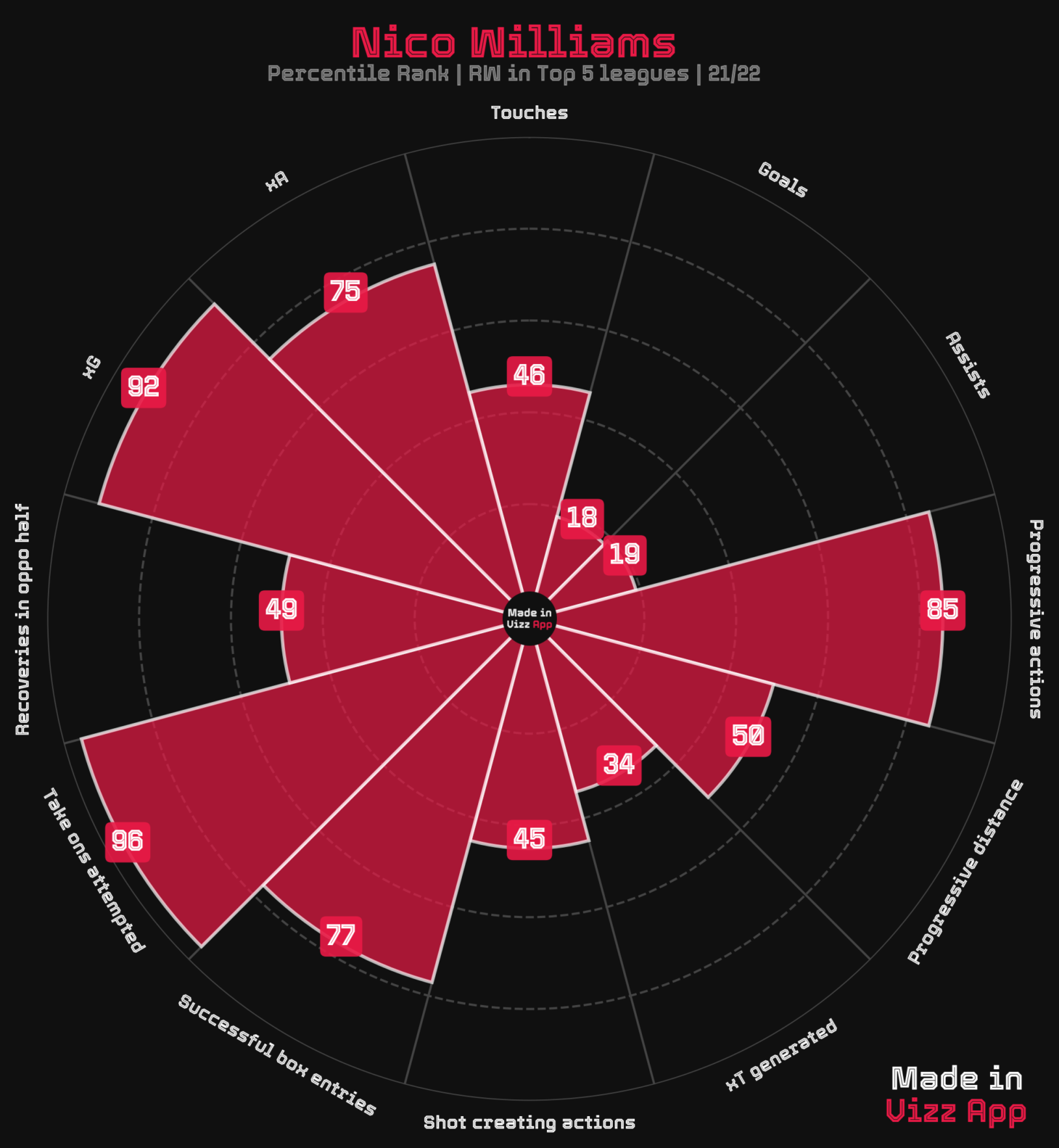 Fast and confident with the ball, Nico Williams is excellent at carrying the ball forward and taking on opponents, playing with directness and purpose instead of choosing the easy option. In this sense, his numbers are already top-notch with 7.71 progressive carries and 3.27 dribbles completed per 90 minutes. His quick turns and changes of direction, either cutting inside or getting to the by-line, are his trademarks which he executes to find space for a shot or a pass. When he runs straight at defenders, he showcases his rapid acceleration to gain a first advantage, but he is also able to use his good control of the ball in tight spaces when opponents close him down.

On the other hand, his decision-making is sometimes rough, a consequence of his inexperience but also of an understandably limited awareness of the tactical team plan. He is, as shown from our infographic above, a player who likes to hug the touchline, meaning his offensive involvement can vary in the different phases of the game. His 6.55 touches in the box per 90 minutes show his tendency to attack and contribute to the offensive output of the team, although not the same can be said for his off-the-ball contribution especially when the team is protecting the lead or adopting a defensive mentality. In most matches this season, Bilbao pressed high, trying to win the ball back quickly and efficiently: regarding this aspect, Nico Williams has demonstrated to be well synced with his teammates, averaging 24.72 pressures p90 (8.24 in the attacking third).

Nicolás Serrano is the youngest member of Athletic Club’s current first team and the last one to have made his debut coming from the excellent Cantera, although he joined Los Leones only in 2019 after developing in the academy of Villarreal. In fact, he was at the center of a huge dispute between the two clubs with Fernando Roig, owner and president of Villarreal, claiming that Bilbao’s move was unfair. At the time Serrano was 15 and, according to the regulations valid in Spain, he could make his decision autonomously and ultimately chose Bilbao.

Born in 2003, Nicolás Serrano is a left-winger with fine technical skills, remarkable pace, and good shooting technique. In the second part of the current season, he is gaining precious playing time, topping his first-ever starting lineup appearance in La Liga with the winning goal, away at Rayo Vallecano: a spectacular left-foot strike from a difficult angle. 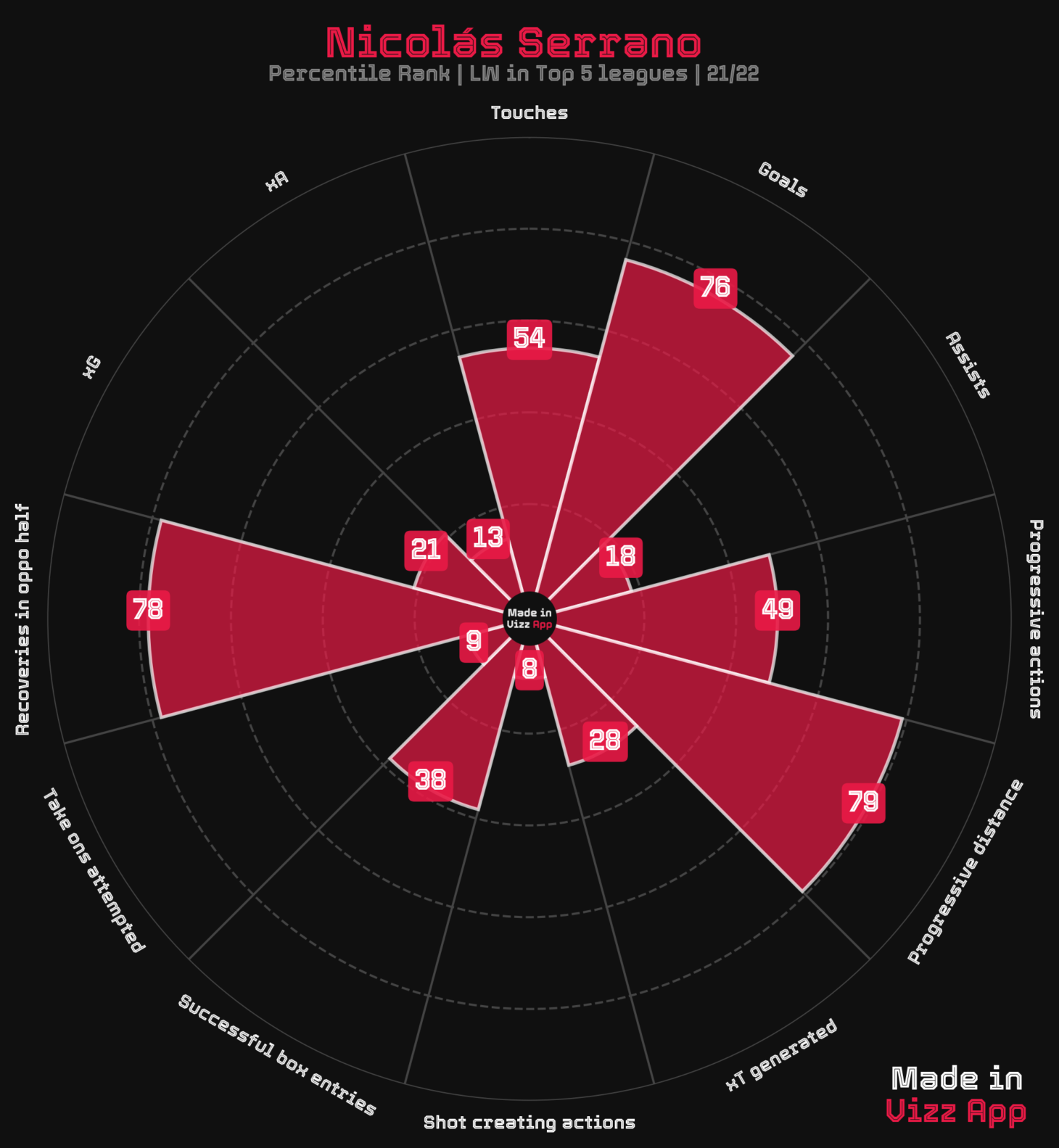 He is technically well-rounded, possessing a great first touch and quick passing, aided by his rather strong frame (178 cm / 72 kg) that allows him to resist physical contact. In these first few La Liga appearances, he used his fresh energy and proactive attitude to pose a threat on the counter rather than engaging in 1vs1 in tight spaces, as it is expected to play against higher quality opponents. He can also add a dimension to his game if he improves his right weak foot, becoming more effective when he cuts inside from the left.

He is certainly one of the most promising Spanish young starlets and in Bilbao, the coaching staff, as well as the spirited fans, are convinced he can be a future Spanish international. Having played less than 200 total minutes in the league so far, we do not have a sufficient sample to evaluate him statistically, however, we believe his growing contribution can be something to keep an eye on in this renovated Athletic Club, chasing a potential European spot.

Athletic Bilbao is a special club known for its talents. With these three players, the future for the Spanish club looks bright. It will be interesting to see their development through the next seasons and whether Athletic will be able to hold their homegrown players or let them go to clubs like FC Barcelona.