Football is a sport which is dependant on stellar decision-making on the pitch. With superior decision-making the probability of individual and team performances towards victory increases. Football immerses itself in a dance with the mind and mental strategies. Subconsciously and consciously elite footballers and managers implement mindset strategies to attain a high-quality performance, both in training and on matchday. To understand how a football match presents ubiquitous elements of a mindset approach, psychological theories, mental techniques, leadership, communication, etc. we will analyze matches, footballers, managers, and executives within elite football, with the purpose to understand the bewilderment of elite performance and seek to provide solutions to unlock the door to consistency on the football pitch.

Kepa Arrizabalaga is the most expensive goalkeeper in football history and Chelsea would have expected its investment to pay a dividend soon, as any good business would want from an 80 million euros investment. Frank Lampard’s Chelsea squad want to pride themselves on building possession from the backline and Frank Lampard seeks to have a goalkeeper with the self-belief to play within his 18-yard box and make connecting passes. During their recent Premier League game against Liverpool, Kepa’s pass completion percentage was fifth for Chelsea, completing slightly more passes than Marcos Alonso, N’Golo Kante, and Reece James who also played the entire match. But there were moments of doubt and lack of self-belief to play with his feet, leading to an atrocious second goal mistake which even legendary goalkeepers will struggle to come back from. 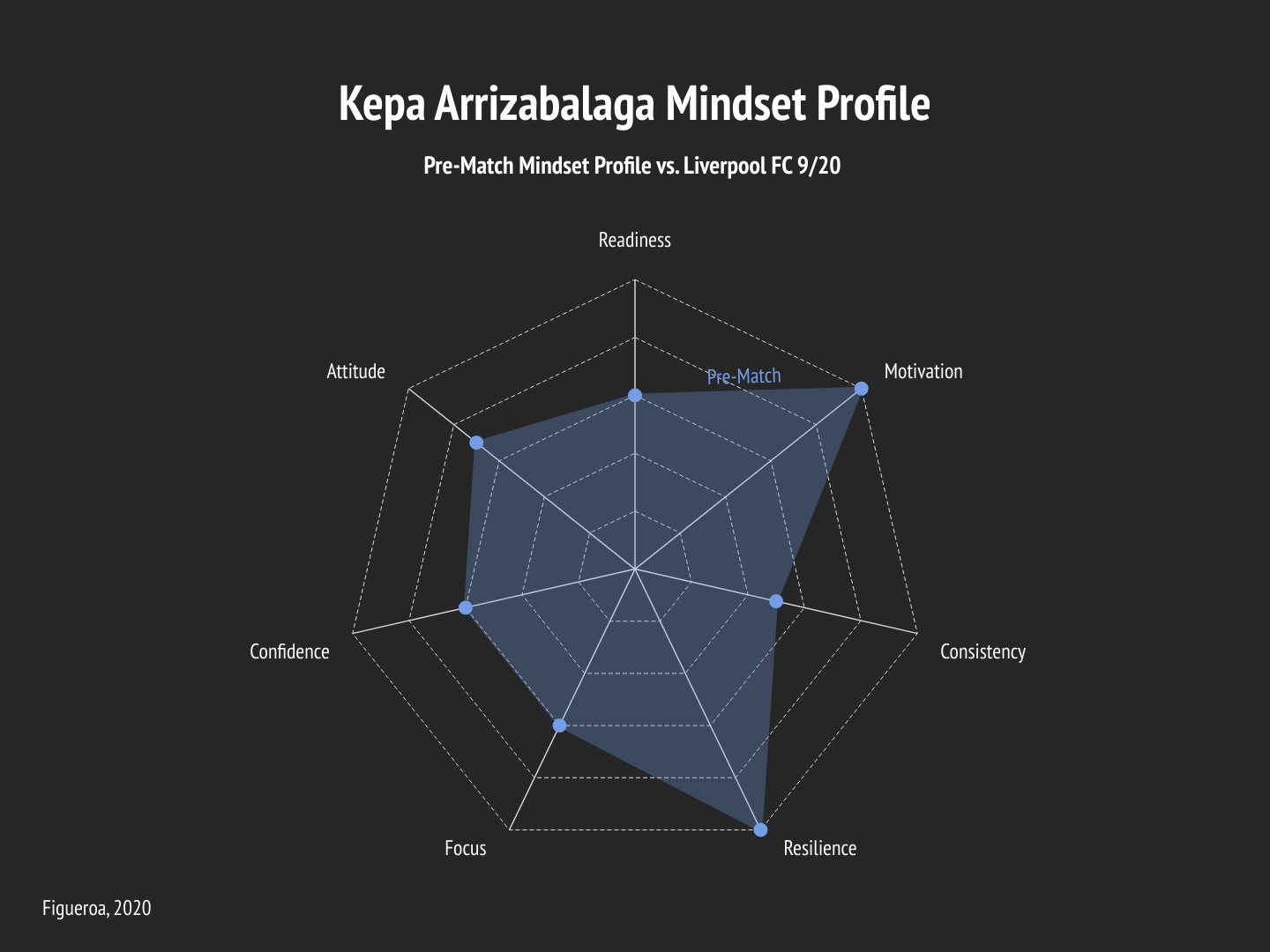 Min 1 – The first touches of the match for Kepa who knows he will be playing with his feet throughout the match, are the most important touches for Kepa. The first touches give Kepa the confidence necessary to become comfortable with Frank Lampard’s gameplan. Initial match performance accomplishments are essentially currency, it takes time to build Kepa’s wealth of self-belief on the task and it is easy to lose. A calm display within the first minute of the match, finding a comfortable connect lob pass to Mason Mount in the centre of the midfield. 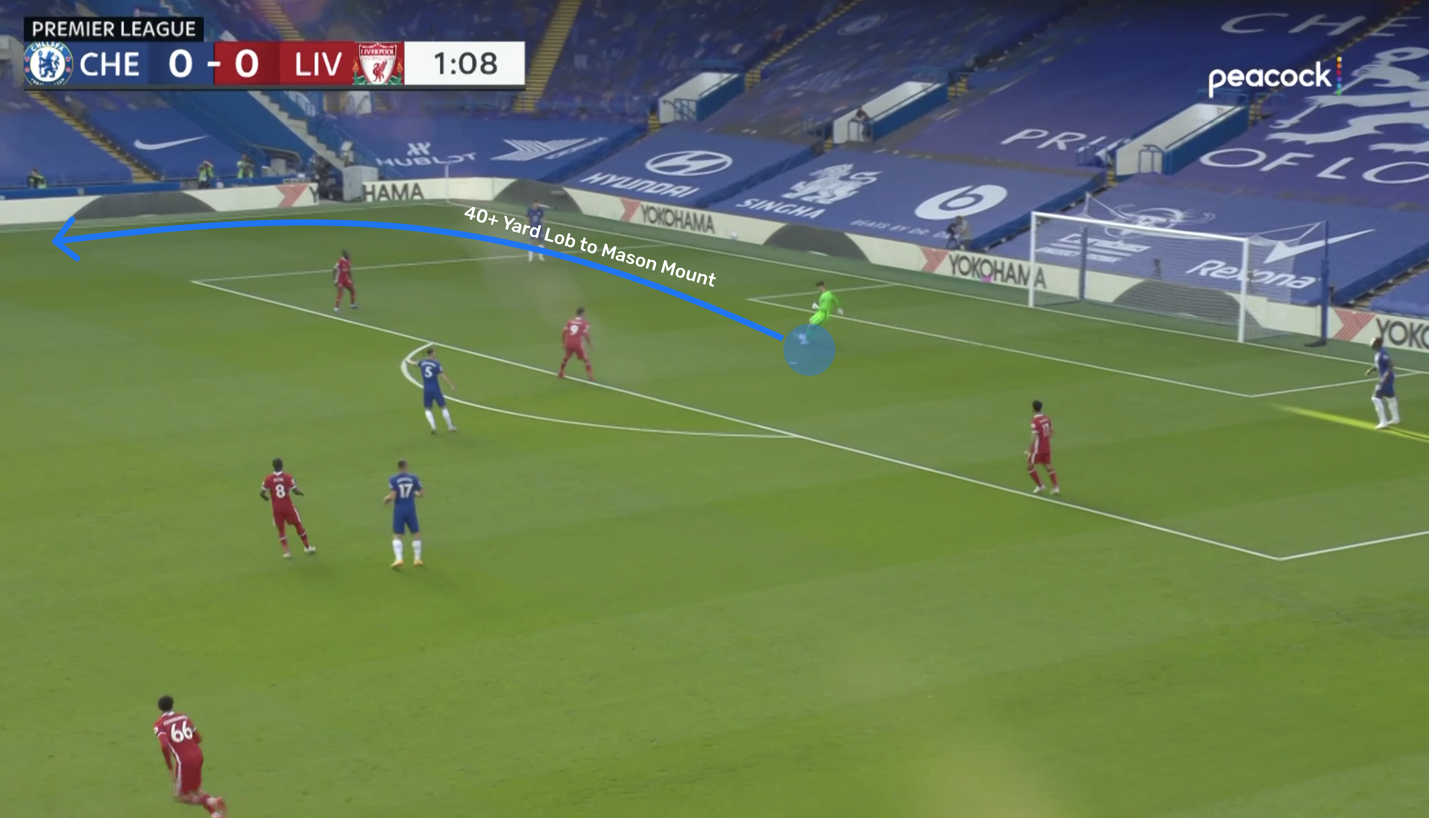 Min 13 – Kepa thus far in the match has displayed self-belief to play with his feet, but his decision to cover space comes into question. When the ball awkwardly starts to spin the Spanish goalkeeper automatically realizes he isn’t going to beat Mo Salah to the ball. Kepa’s body language is in hesitation mode, doubting the decision because the mind knows an attempt the ball could lead to a penalty kick. Ideally, Chelsea’s goalkeeping coaching staff will train Kepa for the situation by providing him with on-field exposure of similar plays within the 18-yard box to train Kepa’s vision to see, analyze, and decide if the ball is spinning toward or away from him. 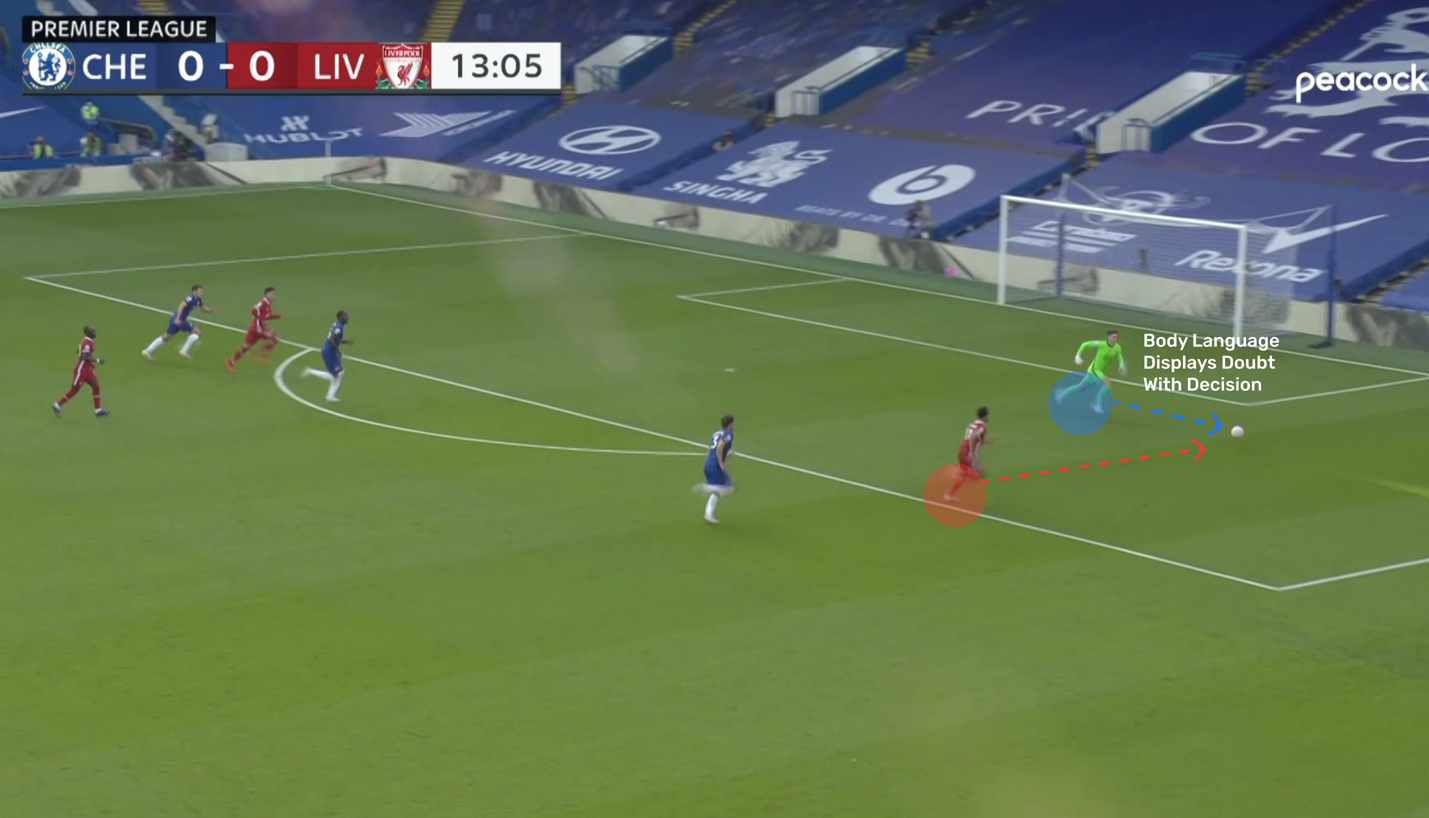 Min 22 – Kepa continues to play with his feet as he executes a flawless pass to Marcos Alonso. For Mane, Salah, Firmino, and Klopp this is a part of their game plan, to pressure Kepa. When a goalkeeper’s ability is in question by his club the negative self-talk is present. Kepa is seeking to display his confidence with a fearless mindset strategy by not being afraid to play with his feet within his box. But Kepa is seeking to rebuild confidence as the match progresses and the self-doubts are present, as he gets away with a close one due to Mane’s pressure. 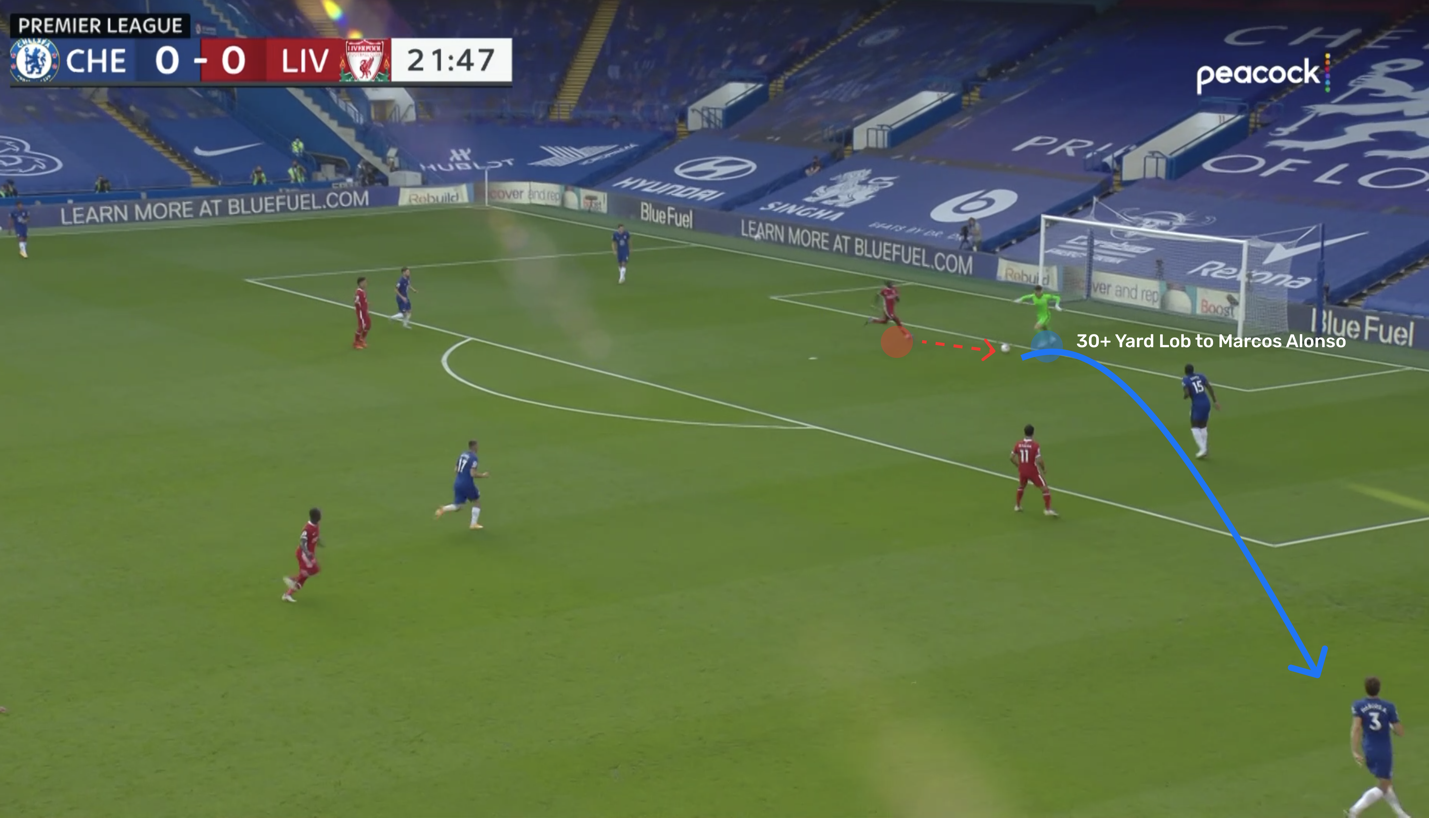 Min 44 – In the last two minutes Andreas Christensen fouls Sadio Mane from a direct position towards the goal, leading to a VAR review and a red card. It is possible Christensen did not want to take a chance with Mane to have a one on one with Kepa or he was unaware of Kepa’s position to cover the ground necessary to clear the ball. Both resemble a lack of communication and cohesiveness between Kepa and Christensen to prevent the red card. 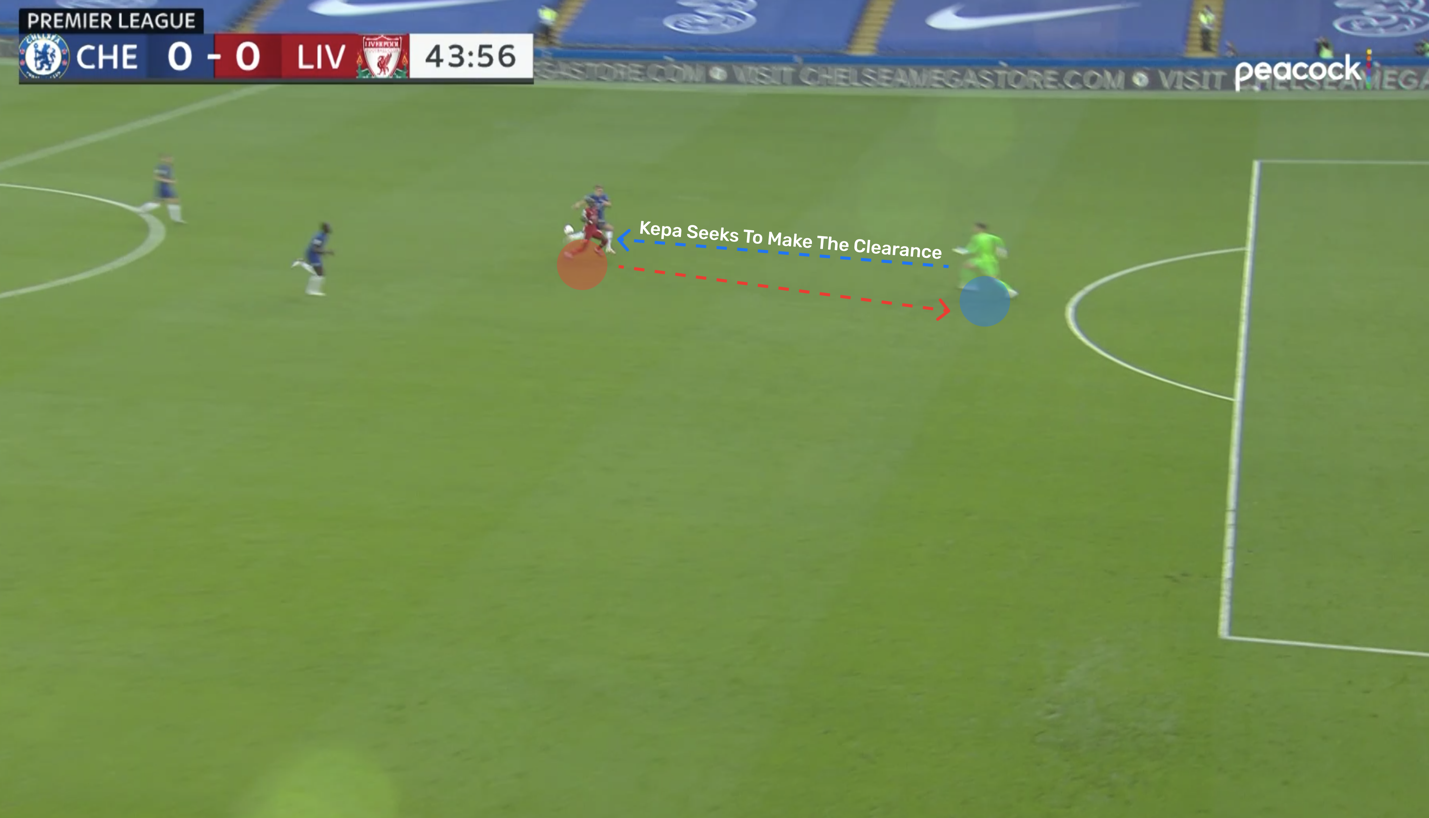 Min 50 – Mane receives a cross from Frimino perfectly onto his head leading to a goal. Kepa is covering the left post in case Frimino decides to shoot, which is well done and there is nothing from a goalkeeping technical perspective that he could have done to prevent Mane’s header. Kepa’s subconscious is aware of the danger Liverpool’s attack is posing. Kepa is fighting to obtain a role identity known as the acknowledgement and commitment from the manager that he is the goalkeeper Chelsea want and need. But every goal takes away from Kepa’s currency of self-belief, leading to him seeking to have a perfect reset approach after the goal to display that he is capable and confident enough to be Chelsea’s number 1. 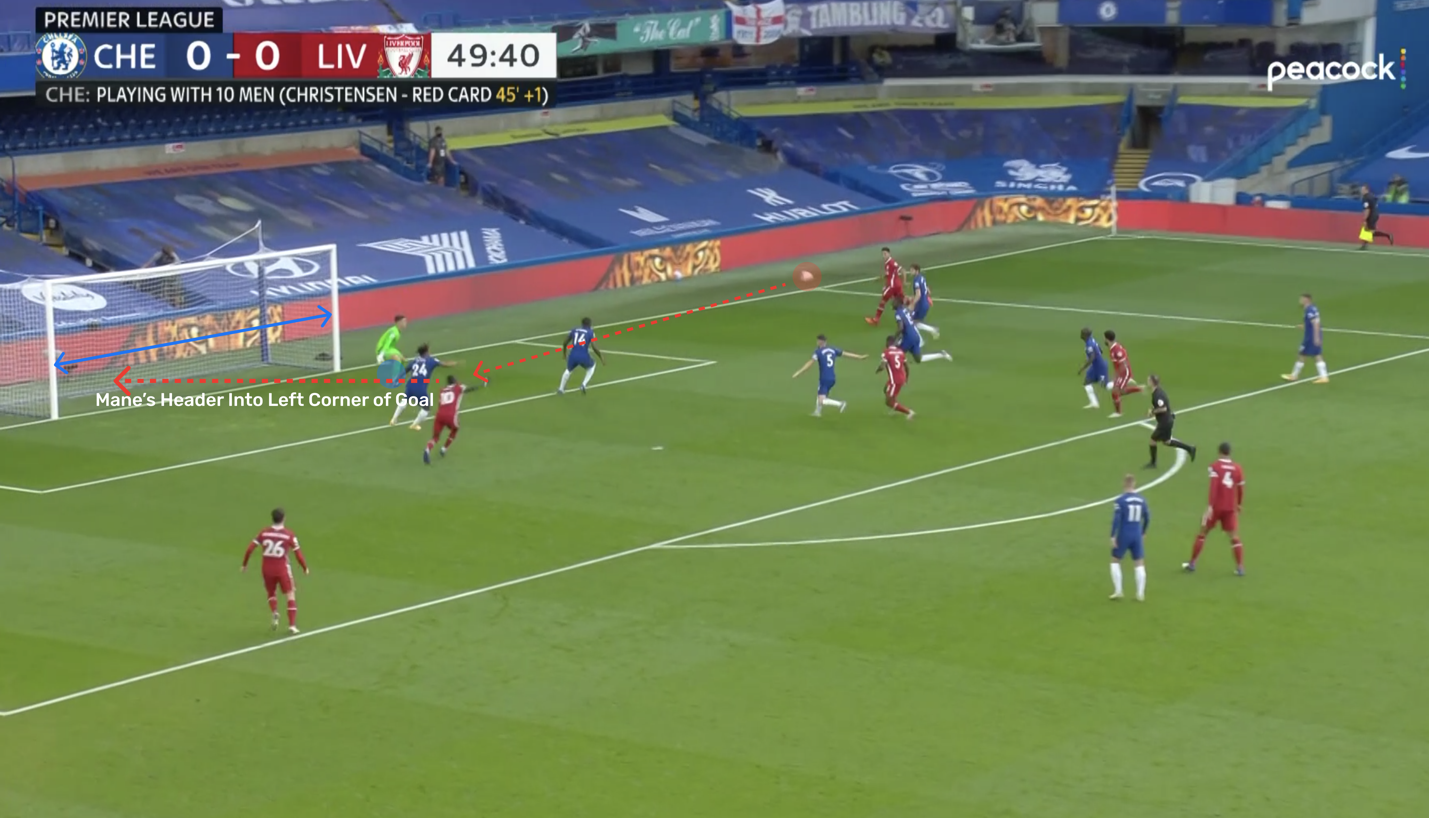 Min 53 – Kepa makes a big mistake, which indicates how he was seeking to prove to Frank Lampard that he is the goalkeeper to play from the back under pressure. The Chelsea keeper is rebuilding self-belief from a litany of poor performances seeking to implement the playing it cool mindset after the first goal. It is common with elite performers who are lacking self-belief to implement what I call, “trying too hard to play with confidence demeanour.” The astonishing fact is that Kepa has James and Zouma as clear available options for short passes and of course, clearing the ball. Kepa, who is seeking to prove to the world he is Chelsea’s number one as the subconscious pressure builds similar to a roller coaster preparing its passengers for the first precipitous drop, ends up trying to find Jorginho within the penalty area, leading to Mane’s interception and goal. 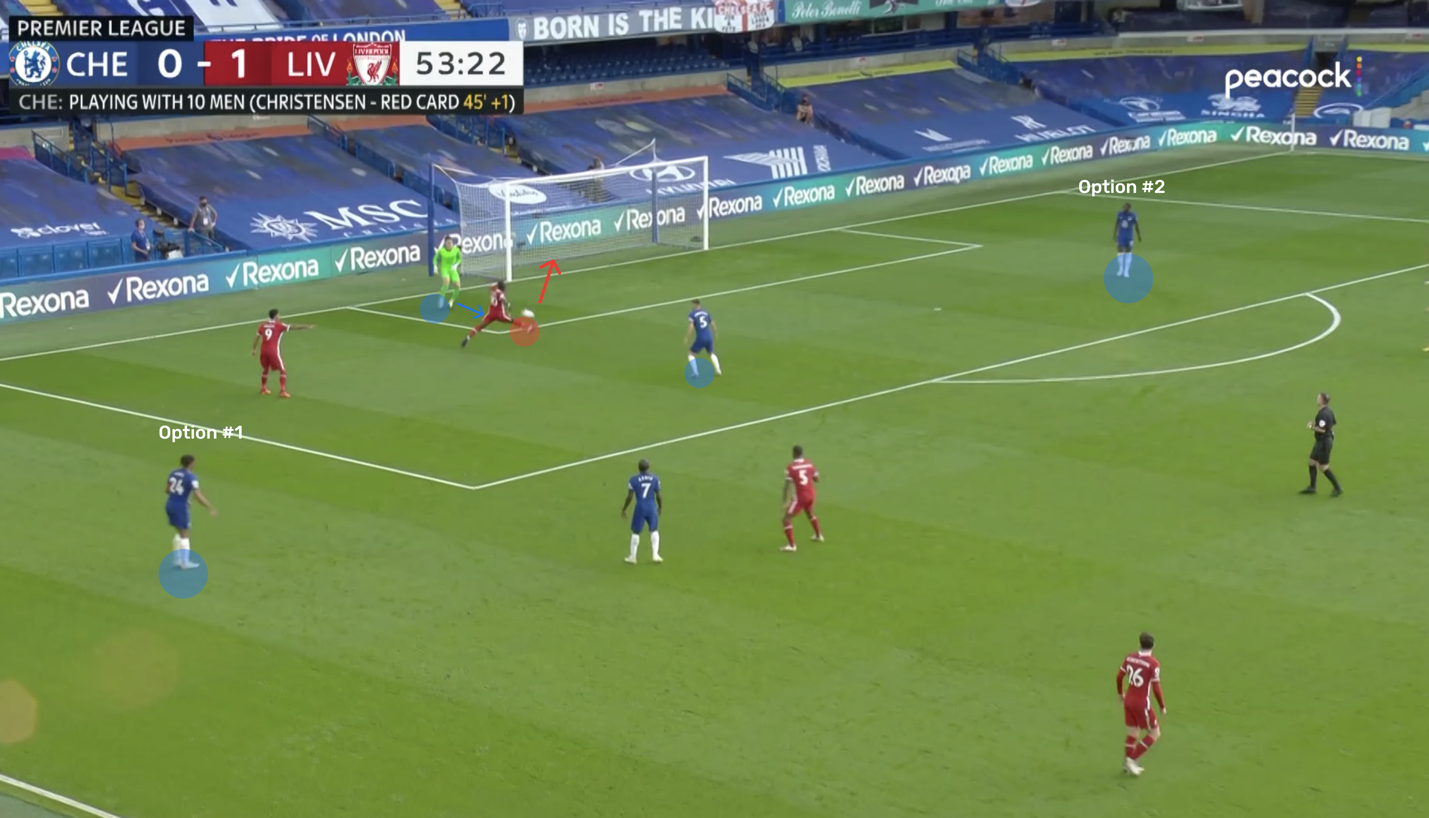 Min 65 – Kepa displays the mental resilience to be present and attuned to the pressure of 61% possession Liverpool were posing to Chelsea’s defence. After the second goal from Mane, he wasn’t playing with the same overly-seeking confidence body language from the first 53-minutes of the match. Kepa was vigilant and cautious of not allowing the 10 man Chelsea squad to concede another goal. His save in the 65-minute shows that he is a goalkeeper who will keep fighting. Kepa displays the personality of a boxer who will always continue to get up after a knockout. Even though Chelsea, for now, have deemed their investment at a loss, Kepa will seek to continue to prove his worth to the team and Frank Lampard. 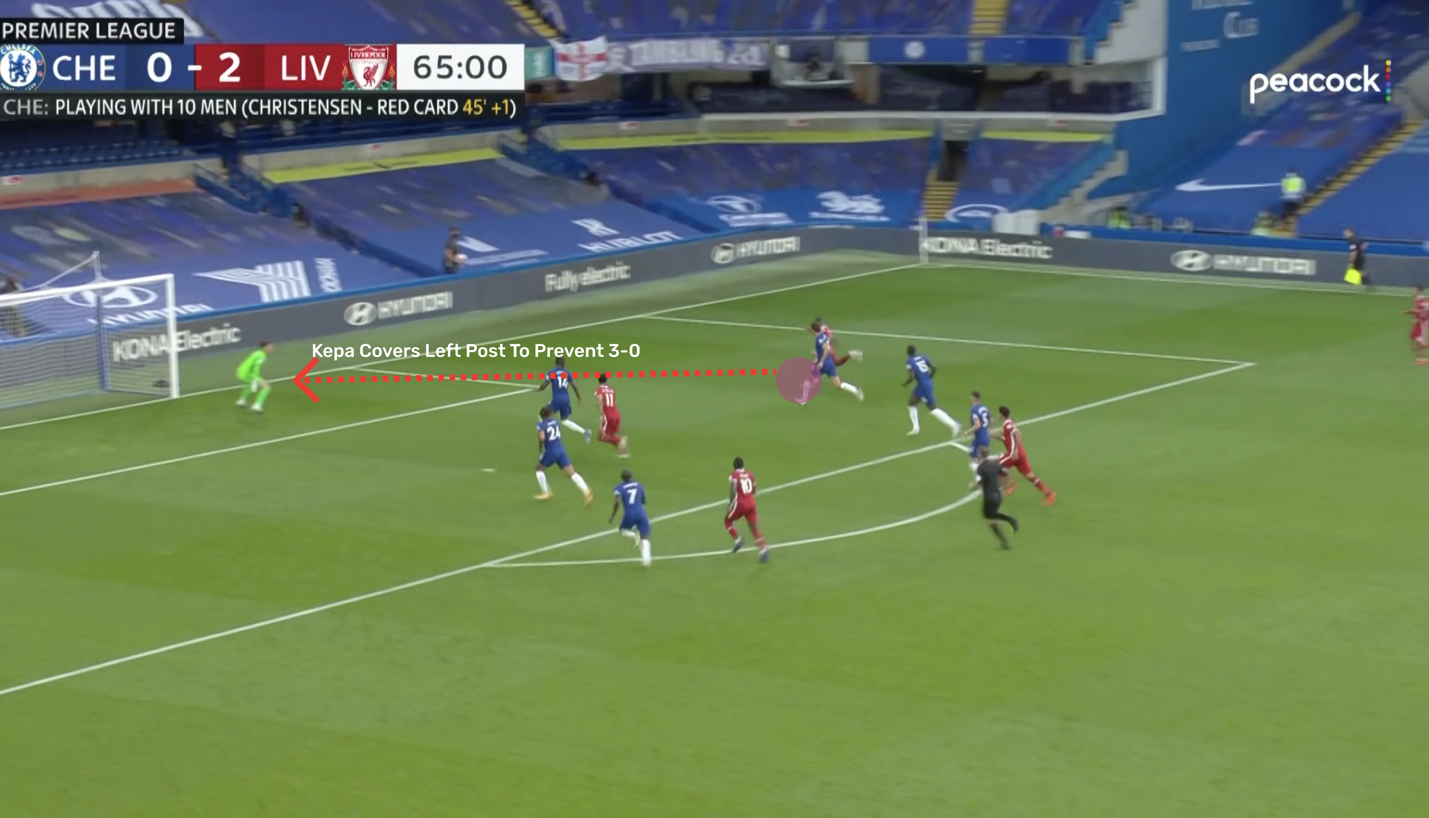 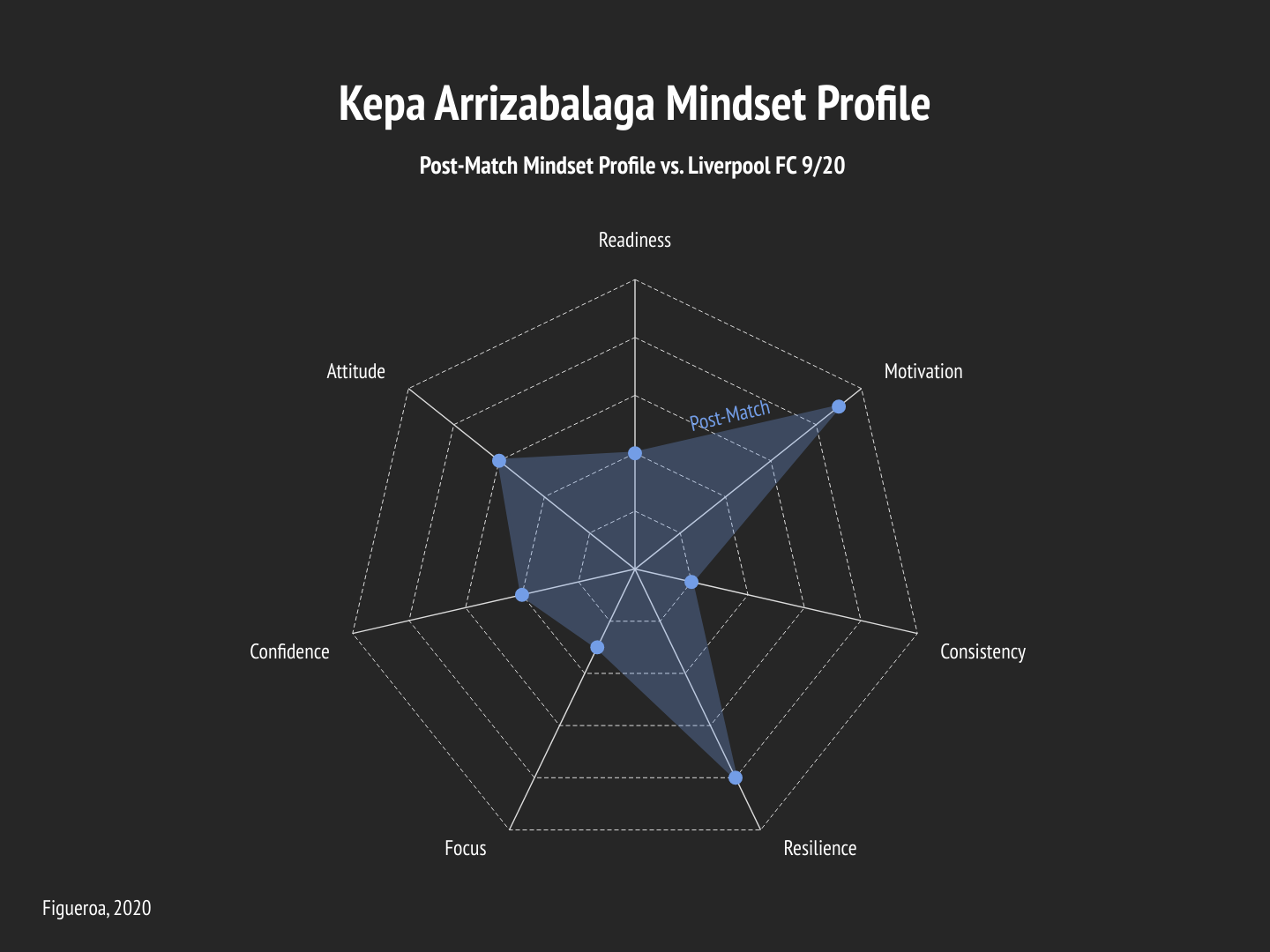 The premise of Kepa’s poor performances at Chelsea could be because of millions of elements which only he will know. Based on the match performance against Liverpool we learned quickly that he is seeking to prove his worth because of his awareness that Chelsea’s legendary goalkeeper and technical adviser Petr Cech, at the time of the Liverpool match, was in closing negotiations to sign Edouard Mendy from Rennes. Kepa will be given another chance, but likely not at Chelsea. A goalkeeper’s relationship with the club is usually fragile. The goalkeeper is the one who responds to the goals being scored and if the goalkeeper is making mistakes that are leading to goals, it quickly leads to a watching brief from the bench, and Kepa’s plight at Chelsea is no different. 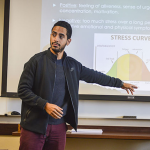 Omar has a strong emphasis on evident-based practices, Omar is a Lecturer for Psychology of Sport 304 at Texas A&M University. Also at Texas A&M University, Omar facilitates university programming, research & development, and performance coaching. Omar is a co-founder of Futbol Marketing Group (FMG), where Omar oversees the day to day operations of the agency. A Certified Mental Performance Consultant (CMPC) through the Associate for Applied Sport Psychology (AASP). Omar also has experience with startups and content creation.