The recent NWSL season was one of the best ones in recent memory. Part of the reason for this was the introduction of a new expansion team, the San Diego Wave. The team had a remarkable debut season which saw them break two attendance records and were the first expansion team to make the postseason in their first year. The main reason for the team’s early success is due to their recruitment of players, with the brightest star of all being forward Alex Morgan.

The star striker has lived up to the lofty expectations placed upon her as she helped her team finish in the top half of the table by scoring 15 goals and registering three assists along the way. Morgan ended the season with the Golden Boot and was nominated for the league’s MVP award as she helped her team make history.

In this scout report, we will analyse how Morgan has been revitalised as a league player at the San Diego Wave. This tactical analysis piece will be an analysis of her off-the-ball movements, build-up play, how she presses opponents, tactical evolution, and just how valuable she’s been for the Wave FC and their tactics.

Alex Morgan has repeatedly stated that the main reason why she’s performed so well at the Wave is due to the team’s environment. The team’s atmosphere is one where she feels safe and that her needs are taken care of. The team’s coach, Casey Stoney, formerly of Manchester United in the WSL, has repeatedly spoken of how she’s created a safe environment where the players both feel protected and where they have a voice.

Morgan’s performances this season certainly seem to reflect those sentiments.

As was noted before, Alex Morgan has scored 15 goals for the Wave during the regular season, and one goal during the playoffs (16 in total). However, she shouldn’t be viewed solely as a one-dimensional goal-scorer. The player plays a large part in contributing to her team’s offensive build-up through her clever runs and incisive passes.

Like all good players, Morgan constantly scans her surroundings and by doing so, she not only finds openings to exploit but also becomes aware of her teammates’ positions on the pitch. As per Wyscout, Morgan has a 64% pass accuracy rate. This includes 23 successful through passes that were received by her teammates.

One example of this is from the Wave’s game against the Chicago Red Stars. During that quarter-final encounter, Alex dropped deep into the midfield to receive a pass from her teammate. She then spots Emily van Egmond making a run towards the goal and lays the ball off to her. 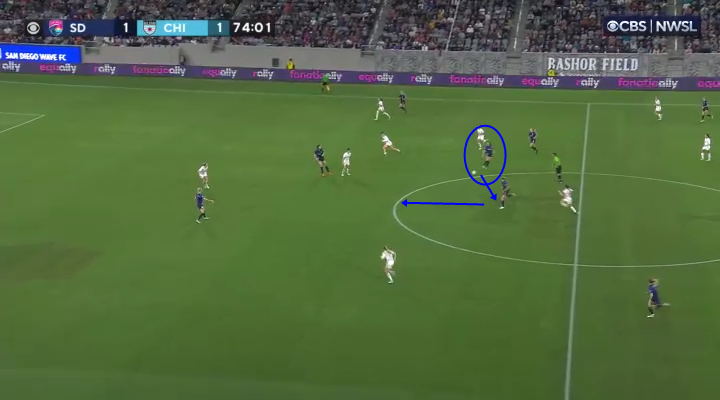 This type of efficiency allows her teammates to get involved in the build-up play as she helps them get into scoring positions. Another way she’s able to accomplish this is by creating space for herself by shaking off her opponents. Against the Portland Thorns, for example, Morgan loses her marker (Becky Sauerbrunn) and frees herself at the edge of the 18-yard-box.

The Thorns then make the mistake of not closing her down and within a few seconds, Morgan sends a cross into the box. The ball then finds the head of Taylor Kornieck, who draws first blood in the semi-final encounter. 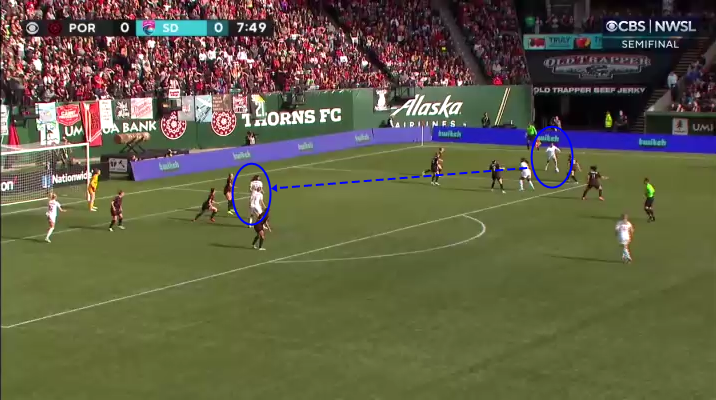 Morgan doesn’t send a lot of crosses into the box but she can be quite devastating when she does so. Her cross to Kornieck was also her third assist of the season, thus proving that she’s just as comfortable helping her teammates score as she is taking on a shot herself. Overall, Morgan has created 16 chances for her team this season. Though she does work hard to help her teammates get into scoring positions, Alex works equally as hard to score goals for her team.

There is no better example of this than the first goal she scored for San Diego. In the second-ever meeting with their intra-state rivals, Angel City. After the ball bounces around in the box for a while, Morgan wins a header and sends it towards goal. Dani Weatherholt tries to clear the ball but sends it towards the Wave’s fullback, Kristen McNabb. McNabb then sends the ball into the box and Morgan then makes a run into the area to pounce on a loose ball and slot it home. 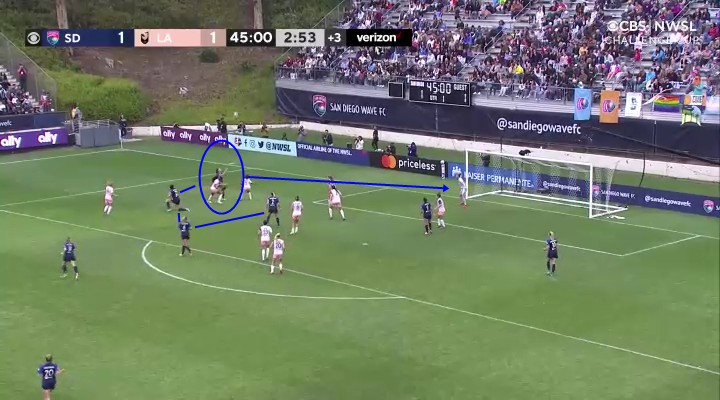 While it is tempting to view Alex’s goal as merely just ‘poaching’, it is better to view it as the product of a finely honed, scorer’s instinct. That instinct was developed after years of playing at the highest levels. It’s also the product of someone who is smart enough to know how to read a game and to capitalise on the opportunities that are given to them.

This is why Morgan is the engine behind the Wave’s attack and one of the main reasons why the team has scored 32 goals this season.

An often overlooked aspect of a player’s game is how they move without the ball. This is especially the case with a player like Alex Morgan, whose off-the-ball movement has played a crucial part in her goal-scoring prowess. Unlike some of her peers, Morgan is not a prolific dribbler of the ball. Instead, she relies on clever positioning and intelligent movements to get into scoring positions.

Morgan has the ability to both see open spaces and create them. Her spatial awareness helps her to see those gaps and to fill them and she drifts across the pitch and probes the opponents’ backline. Against Portland, for example, Morgan intercepted a wayward pass from the Thorns at the edge of the box. She then launches a counterattacking sequence from deep within her own half. It’s a testament to her ability to read the game that she was able to spot the mistake as it was happening and launch a counter-offensive with it. 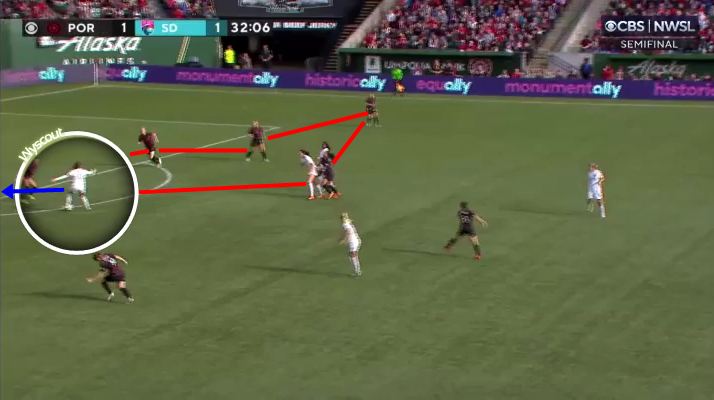 Though Morgan tends to play centrally, she has varied her positions on the field, switching between playing out wide and a central attacking role. In Casey Stoney’s system, the wide players tend to swap flanks often. This is partially done to create offensive overloads and to open up the opposition’s defence by forcing them to commit players to these particular areas. Morgan might not be a winger per se, but she has, at times, played on the left wing. 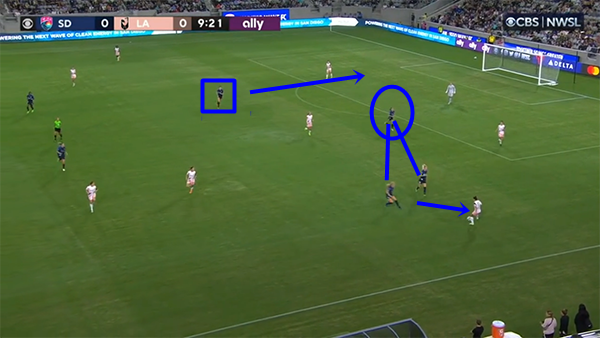 While Morgan does, at times, play on the shoulder, her movement off the defenders’ shoulders is what sets her apart from others. The forward can also recogniSe when a defender is focusing on the ball and when they have to engage the player holding it. She will then drift off their shoulder and attempt to run behind them. Here is an example of this from a regular season game against Portland, where she makes a well-timed run to receive Kornieck’s header, before putting the ball into the net. 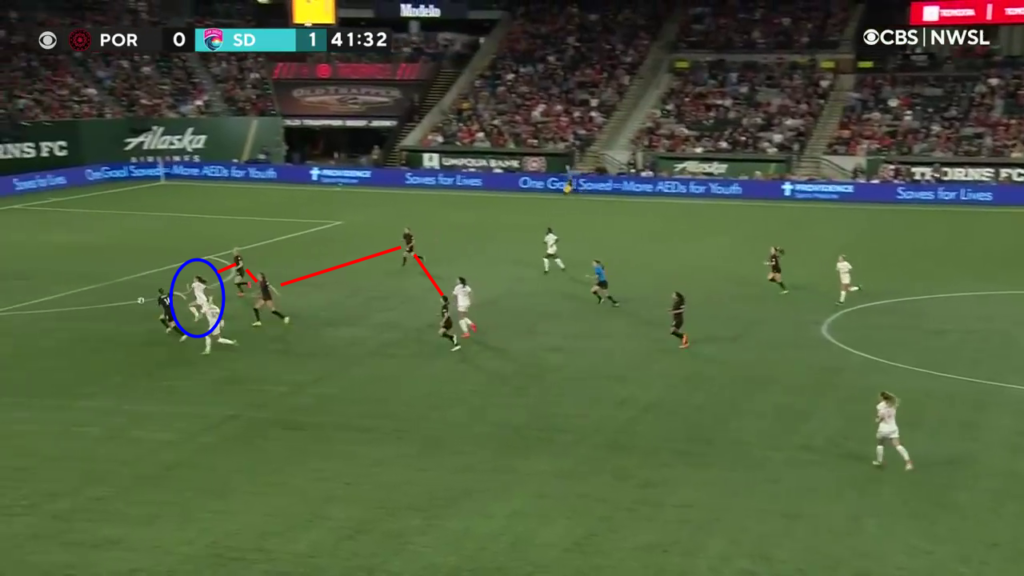 Morgan also uses her movement and acceleration to ensure that she leaves space behind the defence to receive her teammates’ through passes. She is quite fast and will use her speed to make runs in behind the opposition, as was demonstrated in the previous image. One of the ways that she can accomplish this is through a willingness to take a wide position, as she looks to place herself in line with the last player of the opposition’s defence.

Morgan is a team player who not only contributes to the Wave’s offence but is willing to put in the work defensively. This is demonstrated by her willingness to drop deep and to help press opponents off the ball. The Wave have the second-best defensive record in the league, as they have only conceded 21 goals. Though most of the credit for this goes to the stellar play of centre-back Naomi Girma and goalkeeper, Kailen Sheridan, the Wave players’ willingness to defend as a unit is one of the main catalysts behind the team’s success this year.

And there is no doubt that Morgan has contributed to this mindset.

The numbers behind the story

As was noted before, Alex Morgan has scored a total of 16 goals this year. That’s more than she scored during the past four seasons at her previous team, the Orlando Pride (12 in total).

The forward has managed to do this by taking 61 shots and having 85 touches in the final third. Another remarkable aspect about Morgan is that she doesn’t take too many touches before taking a shot which makes her highly efficient in possession. However, taking on a lot of shots yourself means that you aren’t creating a lot of chances for your teammates. This does not make Morgan a selfish player though. The 36 passes she’s sent to the final third would attest to this, as well as the 23 through passes received by her teammates. What these stats tell us is that she’s passing the ball to her teammates and trying to help them score.

As was stated before, Morgan has played a variety of positions on the Wave, ranging from a drifting winger to a left attacking mid. This heat map, however, confirms which position the former Tottenham Hotspur star plays the most and is most comfortable in – centre-forward. 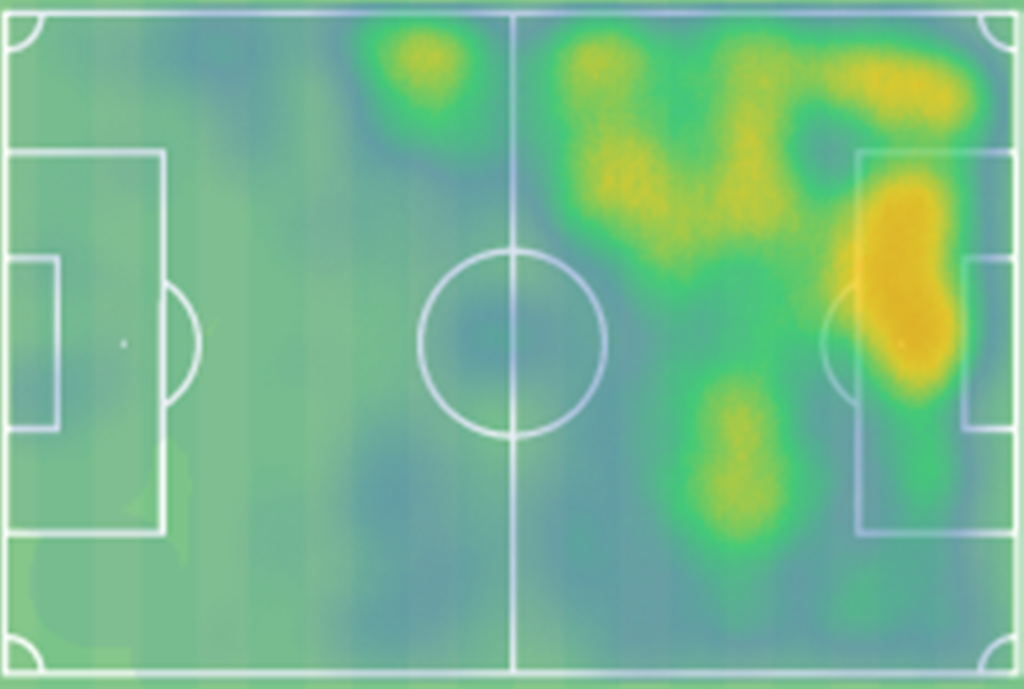 Morgan might not be the best dribbler (she has a 56% completion rate) but she does make up for it in other ways, chiefly through her clever movement and ability to read a game. Her movements might be a little too clever for her opponents, however, as she’s been offside 31 times. She’s also suffered 30 fouls as they attempted to thwart her from scoring.

Morgan isn’t averse to her own defensive contributions as she’s won 55% of her defensive duels and 53% of her aerial ones. She’s also made 41 interceptions and even attempted two slide tackles.

What we can conclude from this data is that Alex is the beating heart of the Wave’s offence who is also willing to step up in other areas where she’s needed. And that makes her both a true team player and a leader for her team.

When the San Diego Wave wanted to make a big splash and announce themselves in a big way, they did so by signing Alex Morgan. Though there was some initial scepticism over the move, due to her past performances for other teams in the league, the signing has turned out to be a shrewd one. By scoring 16 goals and captaining her team to the playoffs, the forward has lived up to expectations of top billing and a star player.

The forward has had a great season and as coach Casey Stoney noted, she ages like a ‘fine wine’, and her vintage performance this year has proven this. The star striker seems to have found a home in San Diego. It is a city that loves her and she loves them back.

And within the right environment, the most beautiful flowers can blossom. Morgan has everything she needs to build on this successful year and to be an important player for the Wave for several years to come. 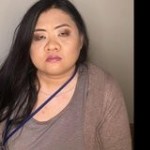 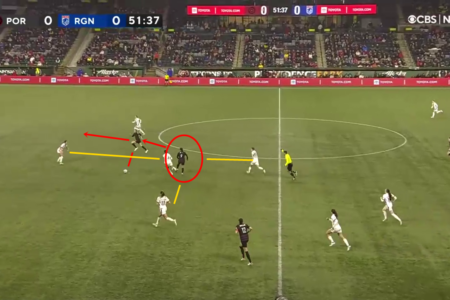 The NWSL season has officially come to an end. At its final, the Portland Thorns were crowned the league’s champions […] 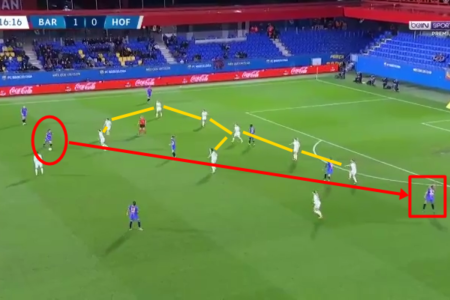