No team would have wanted to play against Gamba Osaka at this juncture, with the Osaka-based side winning all of their last six matches whereas there seems to be no end to Yokohama F. Marinos’ topsy-turvy start. The reigning champions started the J1 League campaign on a poor note and never seemed to revive from the early debacle.

In this tactical analysis, we will discuss the tactics of both the managers and the intricacies of the game.

Tsuneyasu Miyamoto shuffled between 4-4-2 and 3-5-2, however, the most used formation was 4-4-2. Against the Marinos, Miyamoto opted for his preferred 4-4-2. The Gamba Osaka gaffer made just one change to their previous fixture against FC Tokyo. Kosuke Onose started the game in place of Ademilson and he was slotted in the right-wing. Takashi Usami, former Bayern Munich loanee, who played as the right-winger in the previous fixture partnered Patric up top. 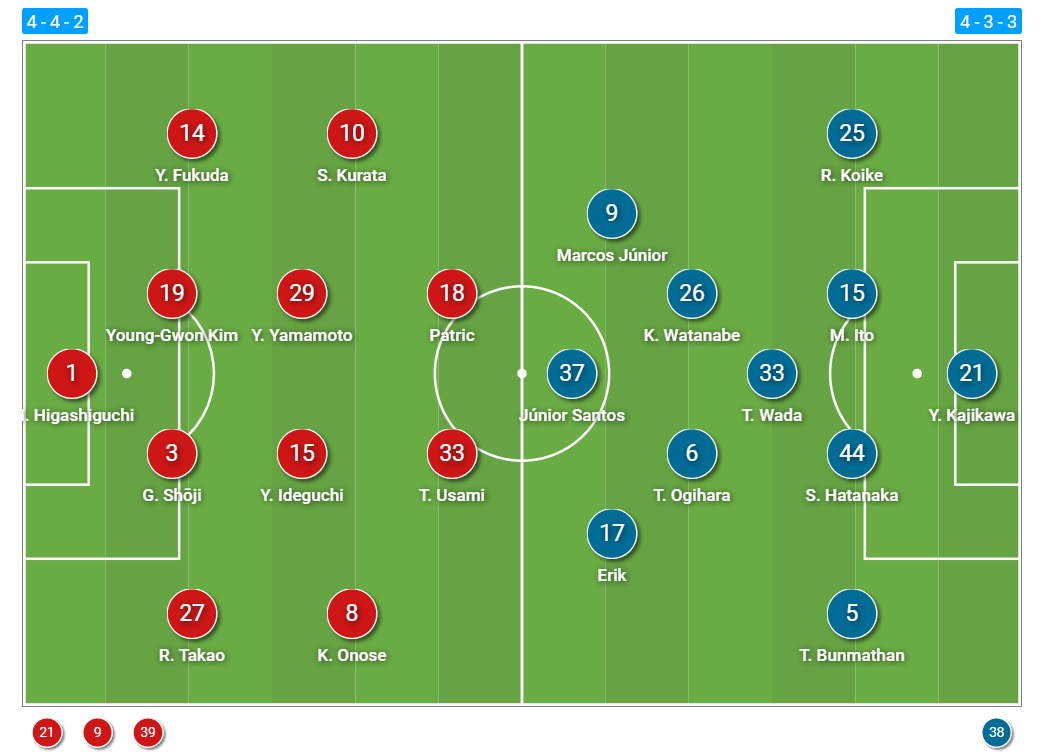 Angelos Postecoglou, the former Melbourne Victory gaffer, opted for a 4-3-3 formation against Gamba. However, in-game it moulded into different shapes in different situations. Out of possession, the Marinos defended mostly with 5-2-3 and in possession, the away side shuffled between a two-man backline and three-man backline. There were numerous changes to the lineup that faced Oita Trinita in the weekend. The midfield looked completely different with Takuya Kida and Jun Amano, making way for Takahiro Ogihara and Kota Watanebe. Erik and Marcos Júnior slotted into the wings and Ryuta Koike replaced Ken Matsubura as the right-back. 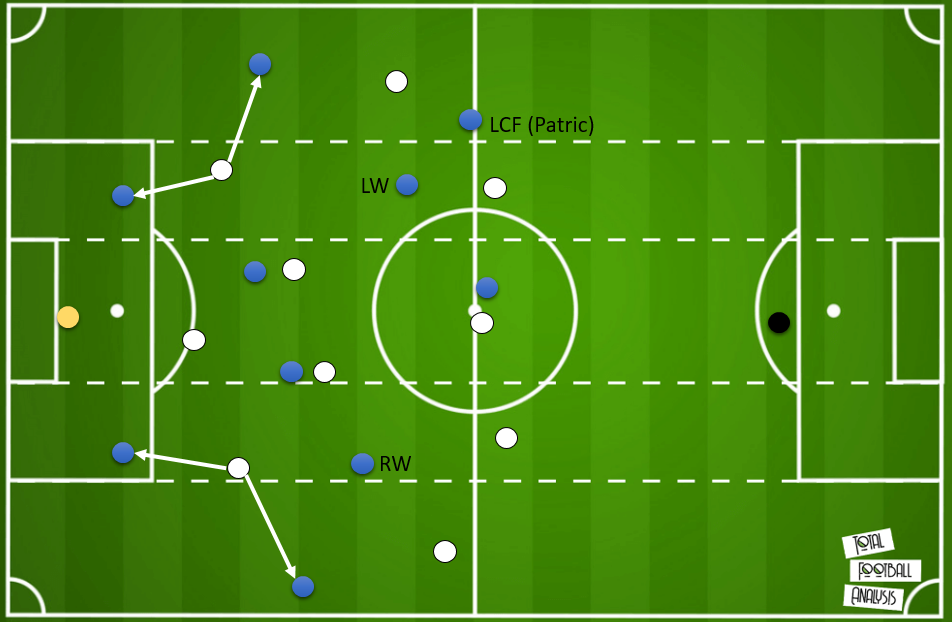 An in-game scenario of the Marinos’ pressing structure is shown below with the right-winger, Onose inverted to the right half space. 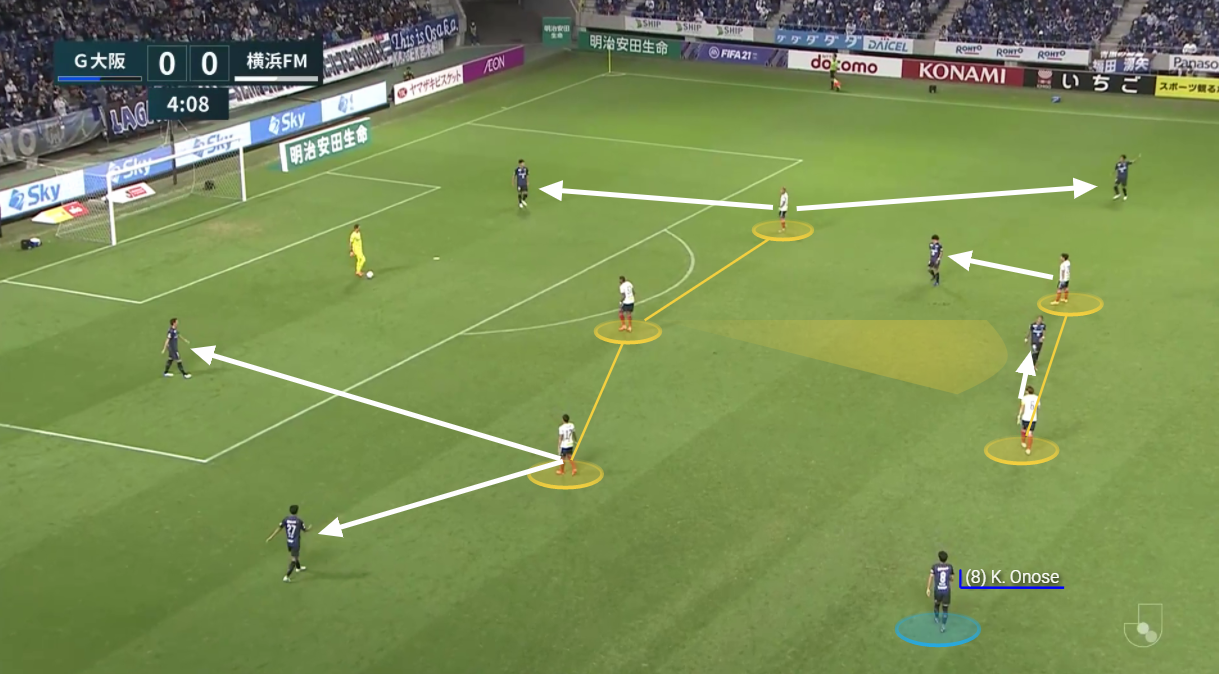 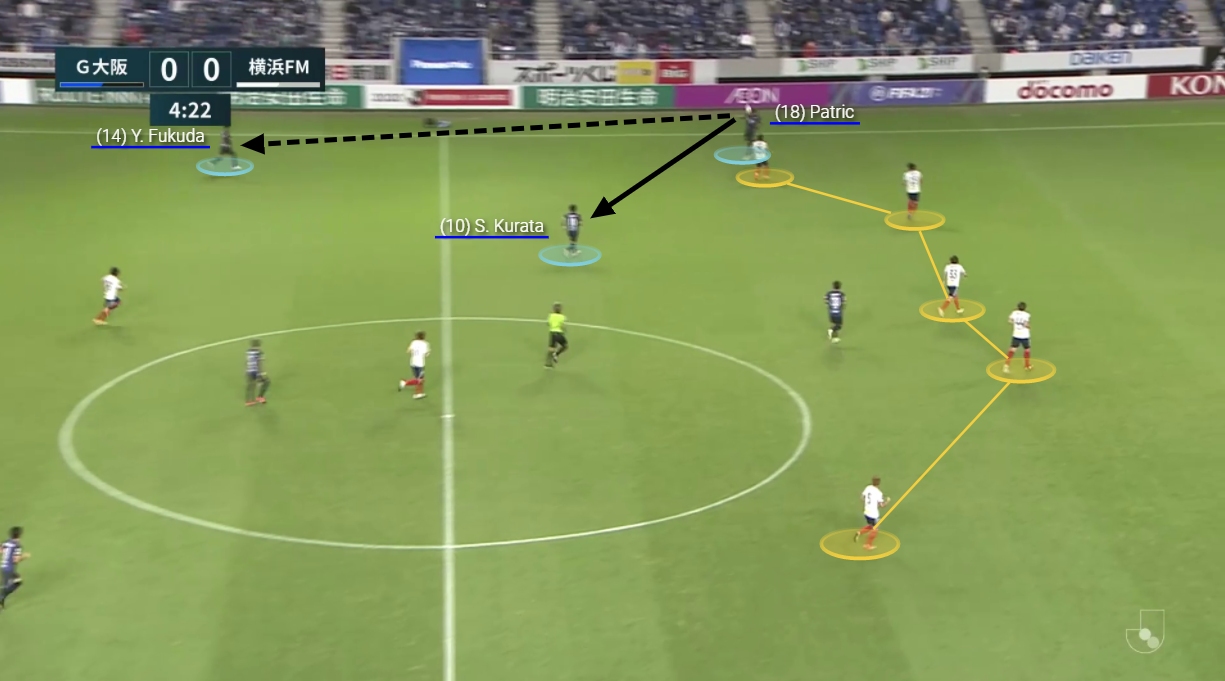 The answer is simple. Patric was the main recipient of long balls. The 6’2” striker used to position himself between the RB and the RCB and the goalkeeper used to target him wide on the flanks. Due to Marinos’ strategy of a player covering more than one Gamba player at once during the first phase of build-up, the immediate players to Patric was left unmarked. Patric used his aerial ability to lay off the balls to their path and Gamba built-up successfully. 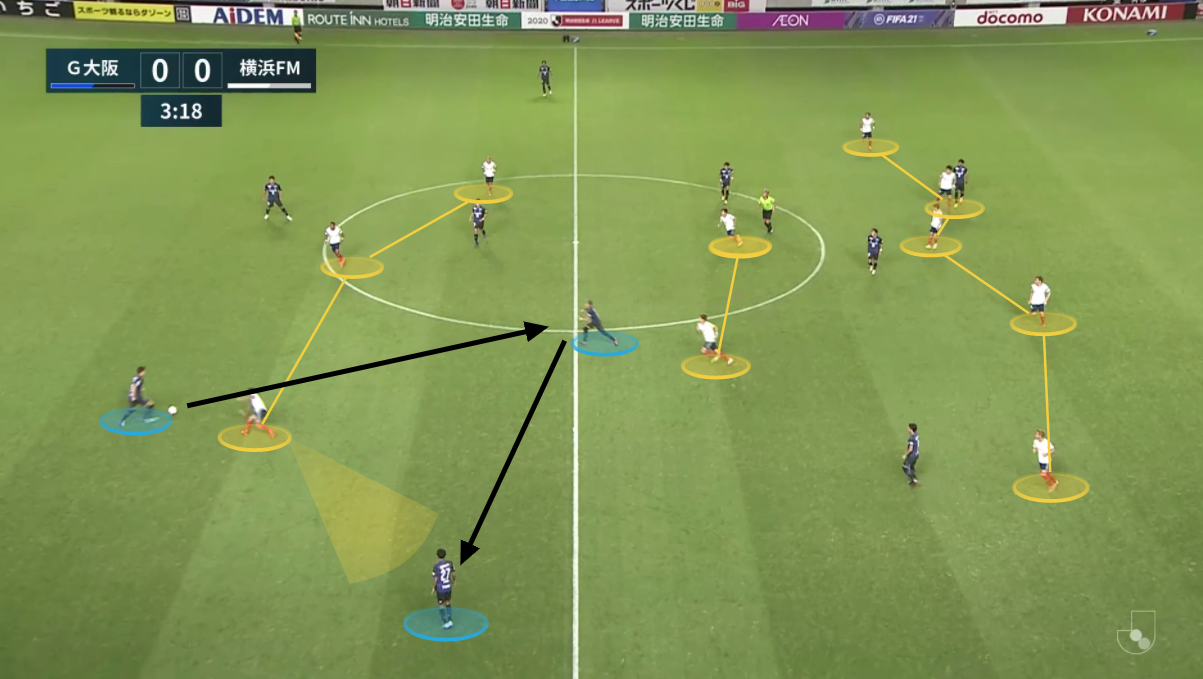 When the RCB of Gamba received the ball, Erik (LW) pressed him putting a cover shadow on the Gamba RB, thus forcing him to play the ball in the central channel. Gamba thought they have surpassed the press by using the 3rd man principle and passed the ball to the right-back (3rd man) on the flanks who was initially unmarked. This looked like a bad idea thereafter. 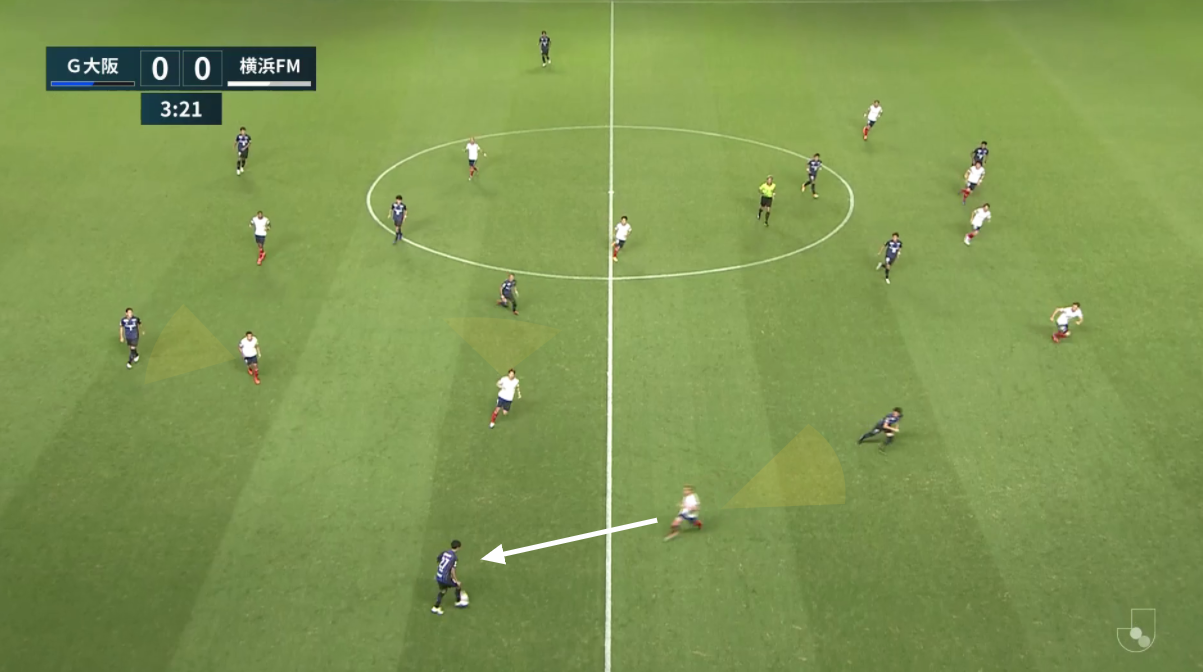 As soon as the ball was passed to the right-back, his all short passing lanes were blocked. Ryu Takao was brilliant in this instance and found his teammate. However, due to Marinos’ pressing structure, Gamba struggled to exploit the away side’s defence in the early minutes.

Gamba slowly and steadily got into the groove and exploited Marinos’ pressing structure and the high line with three methods.

1. Overload the vertical half of the build-up

The winger of the opposite flank of the build-up tucked into the central corridors and positioned himself in between the lines, thus acting as the ‘free man’. 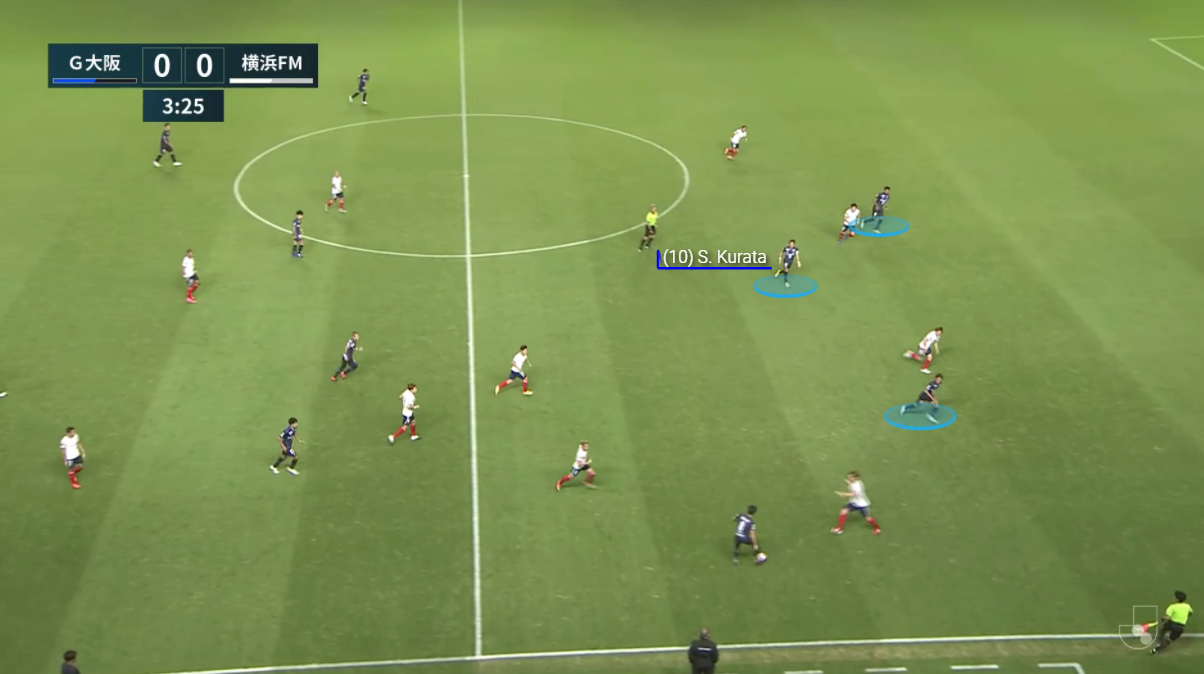 As you can see in the above image, the two strikers maintain the height, the left-winger (Kuruta) positioned himself in the central corridor in between the lines, when the build-up was carried on through the right flank. The width on the left flank was maintained by the left-back.

2. Wingers dropping in the midfield

To push the full-backs up, the wingers tucked into the midfield in the half space alongside the central midfielders. It was majorly executed on the left half of the pitch. Shu Kurata (LW) used to drop deep from an advanced half space position in the midfield. There were two variations to it. One, when Kurata dropped to the midfield, one of the midfielders would move up and pin the defender and the left-back would be pushed higher. Another, the place vacated by Kurata was left vacated and the left-back was pushed up. 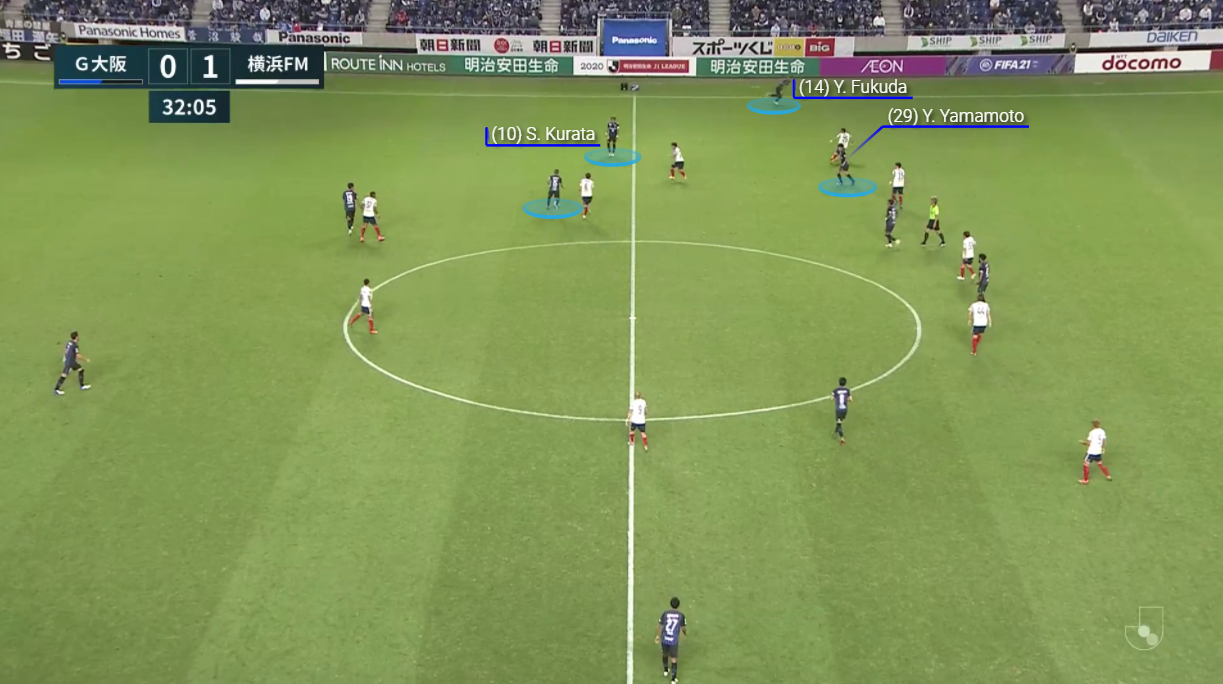 Here, as you can see, Kurata (LW) dropped to the midfield and combined with Yosuke Ideguchi (RCM) and Yuki Yamamoto (LCM) moved up and occupied the space vacated by Kurata.

3. Deep runs by the full-backs

Deep runs by the full-backs were amalgamated with both the previous methods of build-up. If you observe the above image carefully, the left-back (Yuya Fukuda) started to make a run past the Yokohama right-back.

Now, if you observe the image below, the left-winger has positioned himself in the central corridor of the right vertical half. 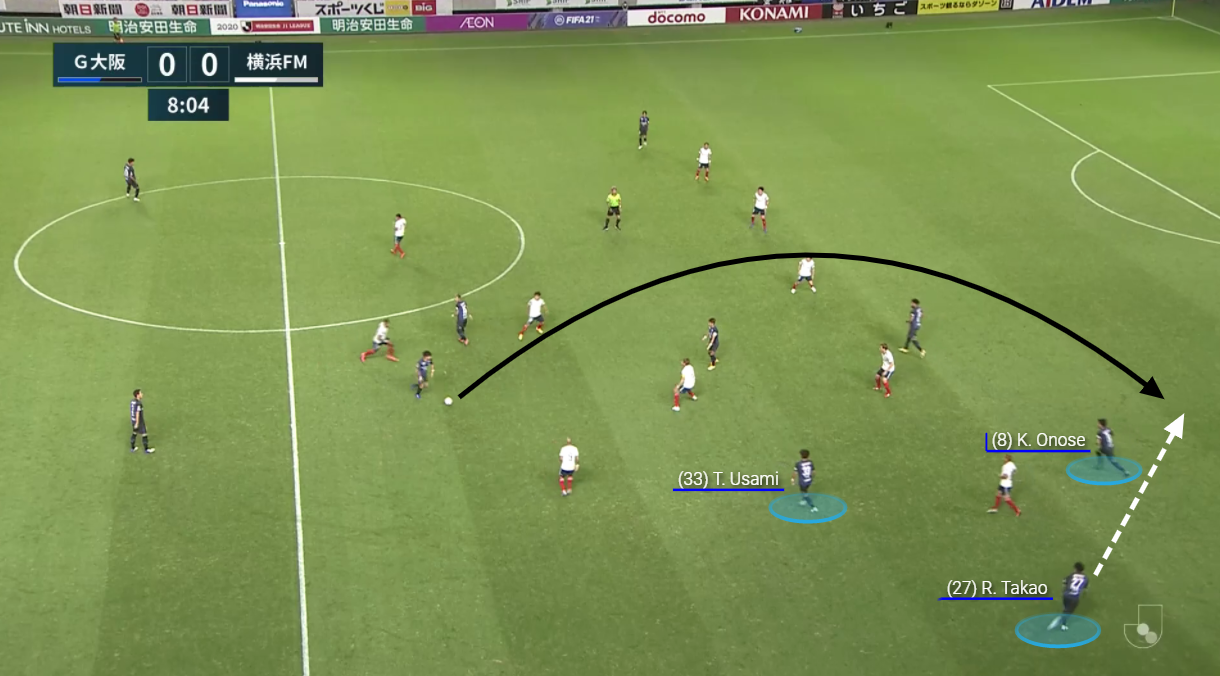 The high flying Gamba Osaka was finally brought to a halt by the Marinos. Even though Gamba’s xG is higher than Marinos, but the away side did trouble the home team, especially, in the first half.

Gamba Osaka troubled the Marinos in the second half by varying and implementing different build-up methods as seen in this analysis. The home team especially exploited Marinos’ lack of men in the midfield.