“I know exactly what their weaknesses are, and I know how to exploit them. But in the end, the players have to do that. So, I have a good plan there,” said Eelco Schattorie. The Kerala Blasters (KBFC) gaffer really did have a plan and the mind games he played in the pre-match press conference worked. He did have a reason to be confident, the Dutch was unbeaten against ATK in the last five games and even won the opening fixture of Hero Indian Super League 2019/20 against ATK.

KBFC started five places below ATK, but the Kerala based side dominated the game tactically even though ATK had fair share of chances.

This tactical analysis interprets the tactics of both the managers and how Schatorrie defeated Antonio Habas’s team through his tactics.

Antonia Habas resorted back to his preferred 3-5-2 against KBFC after his side defeated Mumbai with a four-man backline. The three-man backline providing cover to the goalkeeper, Arindam Bhattacharya were the usual suspects in Sumit Rathi, Agus García and Pritam Kotal. Prabir Das and Michael Soosairaj provided width and were the attacking-minded wing-backs. Controlling the midfield were ATK’s three foreign signings, Javi Hernández, Víctor Mongil, and Mandi. Balwant Singh started in place of the injured and in-form David Williams. The Indian striker could not influence the game and was ineffective throughout. The top-scorer, Roy Krishna, partnered Balwant upfront. 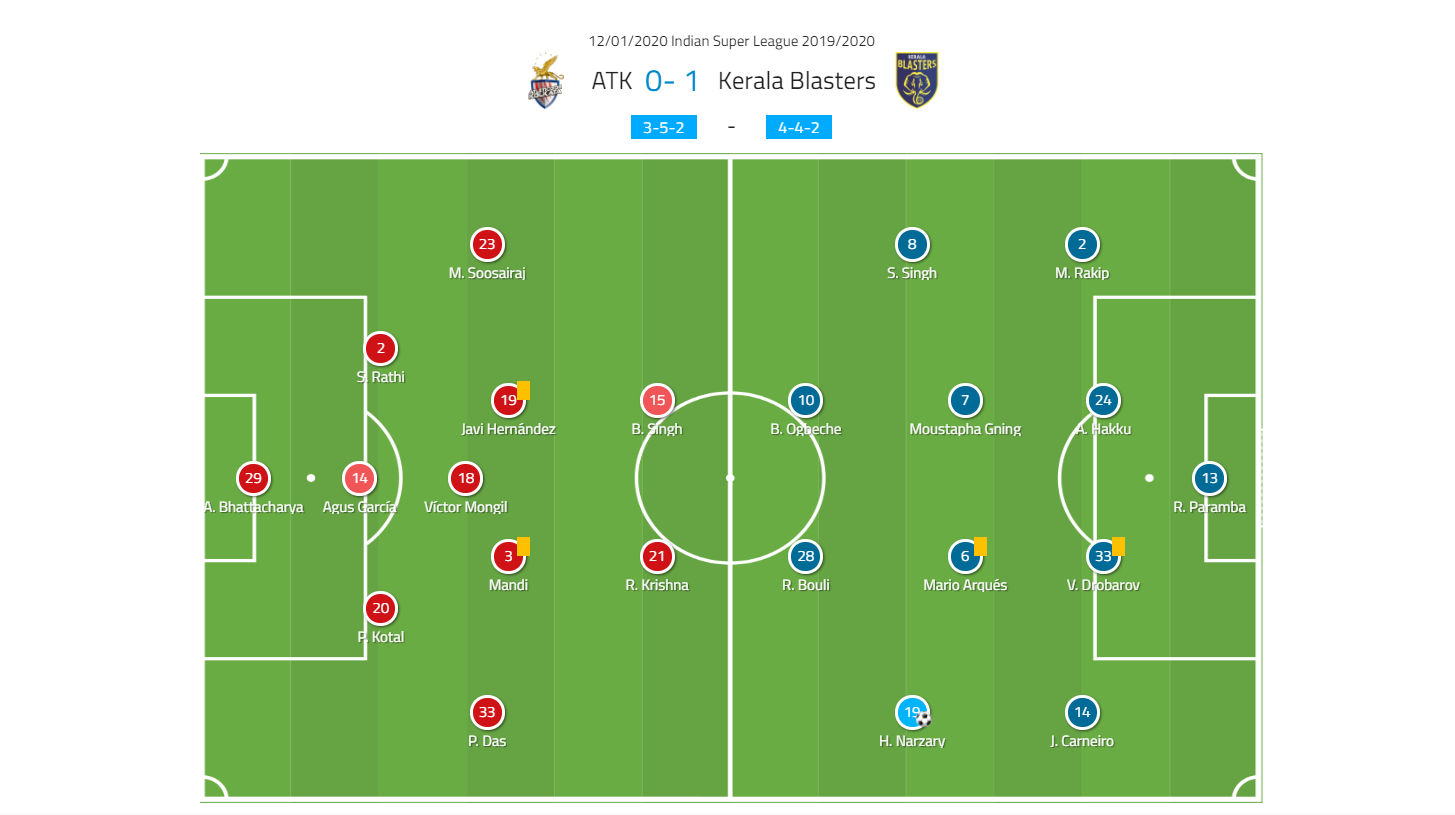 KBFC struggled with injuries throughout this edition of ISL. Schatorrie did not have the fortune to select players from his completely fit squad. Gianni Zuiverloon missed the game due to injury and was replaced by Abdul Hakku. Partnering him in the central defence was Vlatko Drobarov. Jessel Carneiro and Mohammad Rakip positioned themselves on either side of Drobarov and Hakku respectively.

Schattorie had good news as Mario Arqués was back from injury and played in a double pivot alongside Moustapha Gning. Halicharan Narzary and Seityasen Singh provided width in the wings. However, they often drifted inside and occupied the half-space between the lines. Up front, Messi Bouli partnered Bartholomew Ogbeche. Messi Bouli occasionally dropped deeper to position himself between the lines and open up a passing lane for his defenders and midfielders.

ATK adopted man-oriented high pressing from the very start. KBFC has the knack of playing out from the goalkeeper, which is very rare for the ISL teams. Antonio Habas tried to press the Kerala side high and force them into mistakes.

Generally, the two strikers would mark the Kerala centre-backs. The two attacking midfielders would keep a tab on the double-pivot. Soosairaaj would move up and breath down Rakip’s neck, and on the other flank, Das would do the same and press the left-back, Carneiro. The central defensive midfielder, Mongil would seal the press. 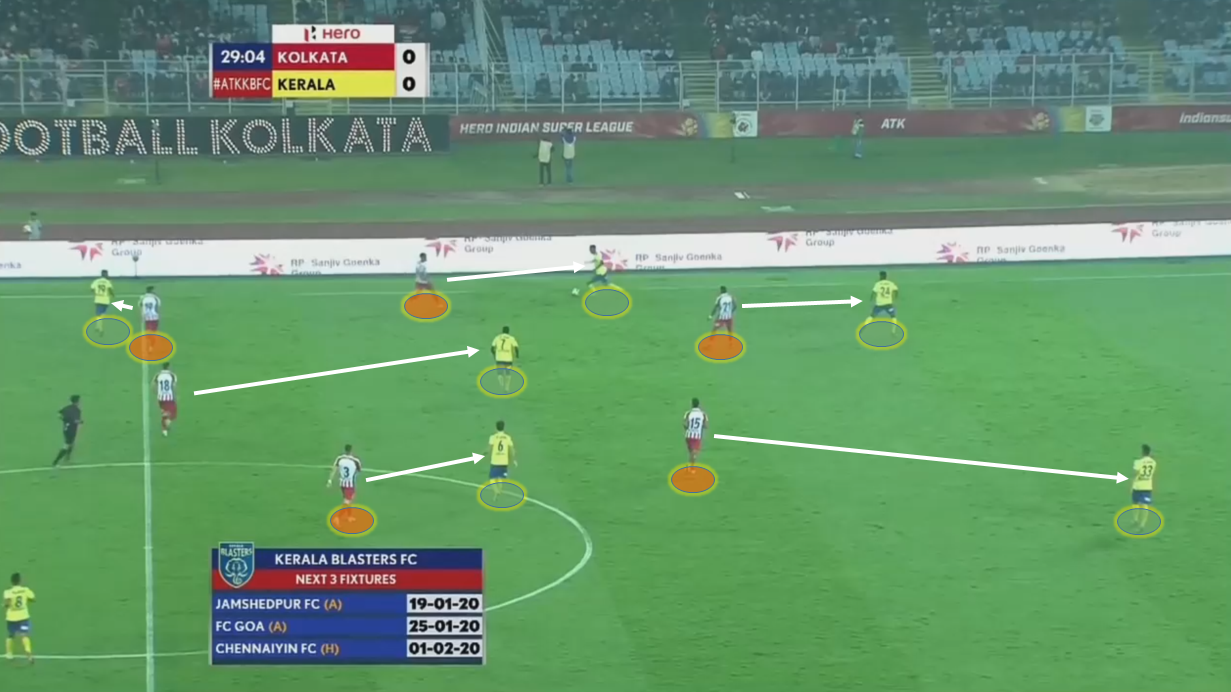 However, it was not always the case. Occasionally, when the ball was played out wide to Rakip, Balwant would move from marking Hakku to create an overload in the wing against Rakip. Whenever that happened, Krishna would move left to keep a tab on Hakku. In that process, ATK would leave the left side of the field entirely free and thus unable to prevent KBFC from building up the play from the back. 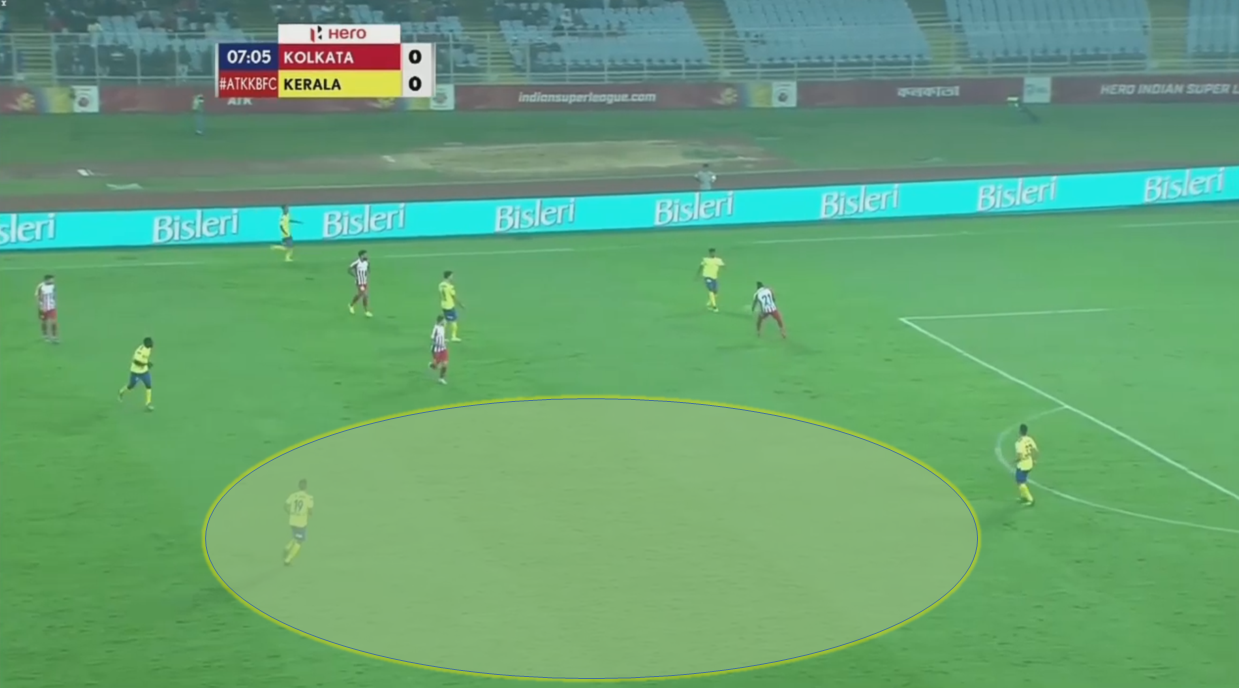 However, KBFC was too slow in playing their passes out from the back and lack of progressive passes and progressive runs slowed their tempo. ATK players would drift from the other side of the field to the playing side and KBFC would still be playing among themselves in the defensive third.

Schattorie played with a traditional 4-4-2 both during possession and out of possession. The KBFC midfielders and forwards sat deep and prevented ATK from playing through the middle. The midfield block moved with respect to the ball and so did the forwards, occasionally.

When ATK was in possession, Javi would move forward most of the times and act as an attacking midfielder while the other two midfielders acted as a double pivot and opened up the passing lanes for the defenders. Schatorrie’s plan was to cage the two ATK midfielders between the midfield block and the first line of defence. In the screenshot below, you can see the distance between both the lines was not much. 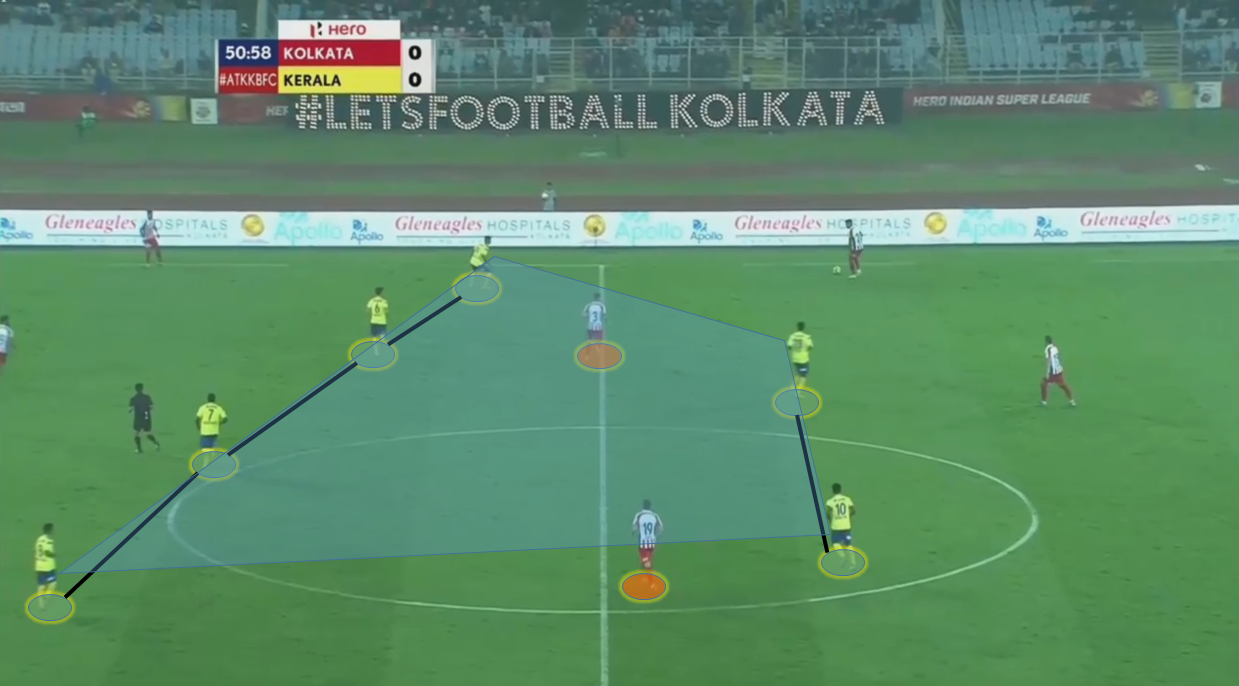 Unable to break the midfield block through short passes, ATK defenders would often go for long balls. ATK played 14.07% of the passes through long balls. The long balls too did not do them any favour as most of the times it would end up in a KBFC possession. The ATK centre-backs played 20 long balls with an accuracy of 25%.

David Williams was a huge miss for ATK. The Australian would often drop between the lines, draw out the centre-back marking him and link up with Krishna to cause havoc in the opposition defence both during counters as well as position based play. Balwant hardly dropped between the lines and cause KBFC no damage.

In the second half, ATK came with more attacking intent as they had to win the game to go top of the table and Balwant too started to drop between the lines and caused few problems. 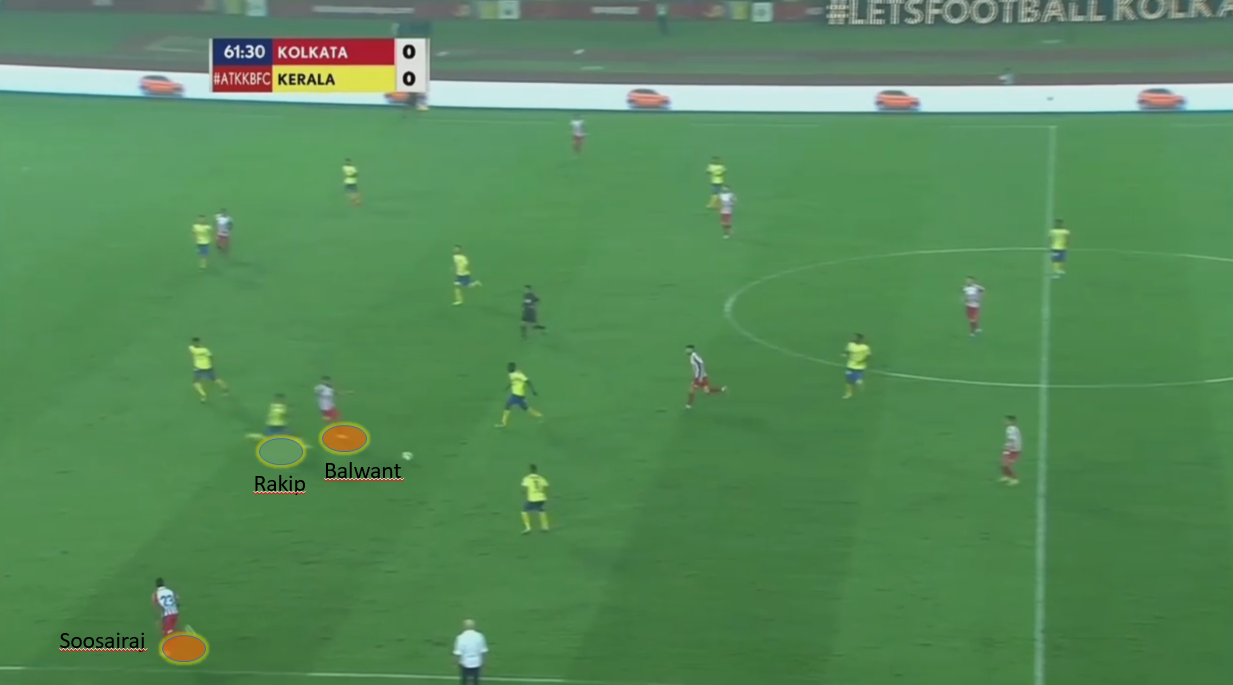 Here, Balwant dropped between the lines and Rakip, the nearest defender to Balwant, moved up along with him and intercepted the play. 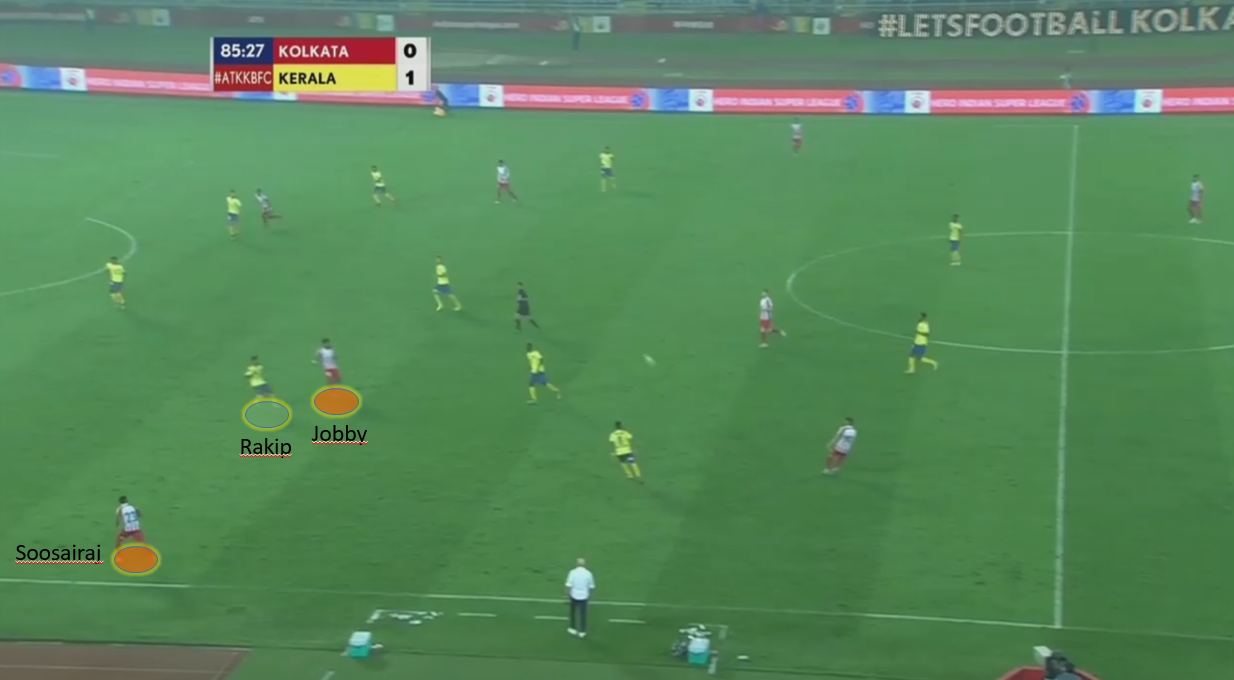 When Jobby came in for Balwant. He too performed the same role as Balwant did in the second half. Again, when Jobby dropped between the lines, Rakip moved up along with him.

Why did I mention calculated risk? If you observe carefully, you can see in both the cases, Soosairaj was completely free in the left-flank and any passes to him would have surely created chances for ATK. However, the inefficiency of ATK defenders and the midfielders in finding Soosairaj helped Schattorie’s cause.

KBFC is one of the two teams in ISL that continuously plays out from the goalkeeper. KBFC would often use the likes of Arqués and Moustapha to progress the ball from the midfield. The full-backs, especially the left-back, Carneiro, would be pushed up and the wingers would drift inside and occupy the half-spaces between the lines. 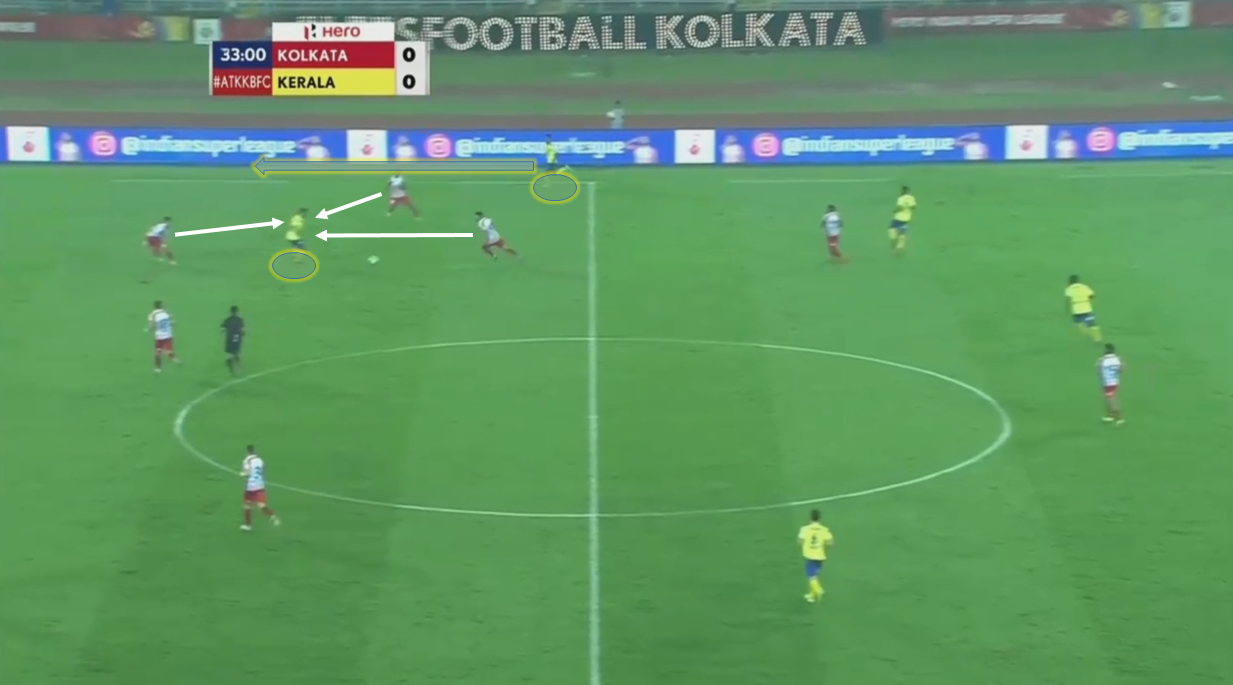 In the left-flank, sometimes Narzary would drop deep to make room for the left-back, Carneiro, to take a position in the opposition half. However, most of the times, Arqués occupied the left-back position and Carneiro moved to an attacking position. When that happened, Narzary would drift infield, between the lines to open up a passing lane. 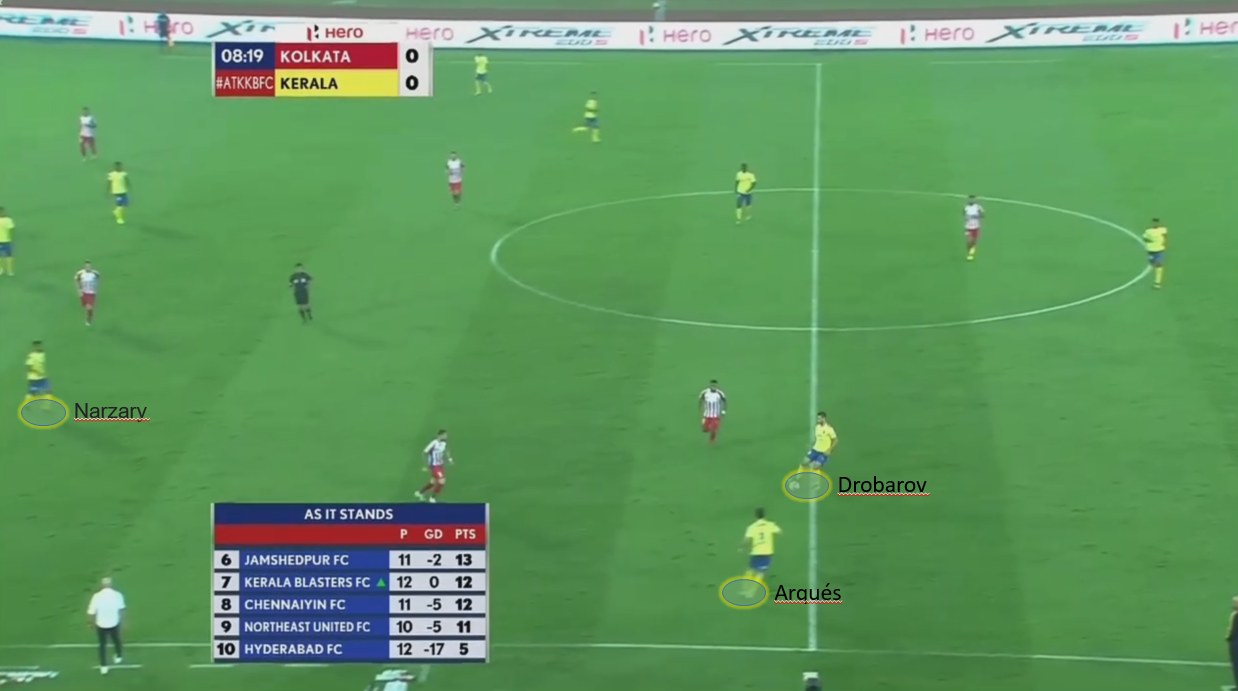 Here, Drobarov had the ball and he had forward and lateral passing options in the form of Narzary and Arqués. KBFC often progressed the ball through such methods in the first half.

However, in the second half when ATK came in full throttle and pushed both the wing-backs in further attacking positions, Schattorie changed his approach. He instructed his players to adopt a direct approach and indulge in playing more long balls to catch ATK off guard. KBFC played 17% of passes as long balls in the second half compared to 9% in the first half.

In the second half, Rakip would hardly make a run forward, rather he was given the responsibility to play long balls and diagonal balls to the final third along with Arqués. 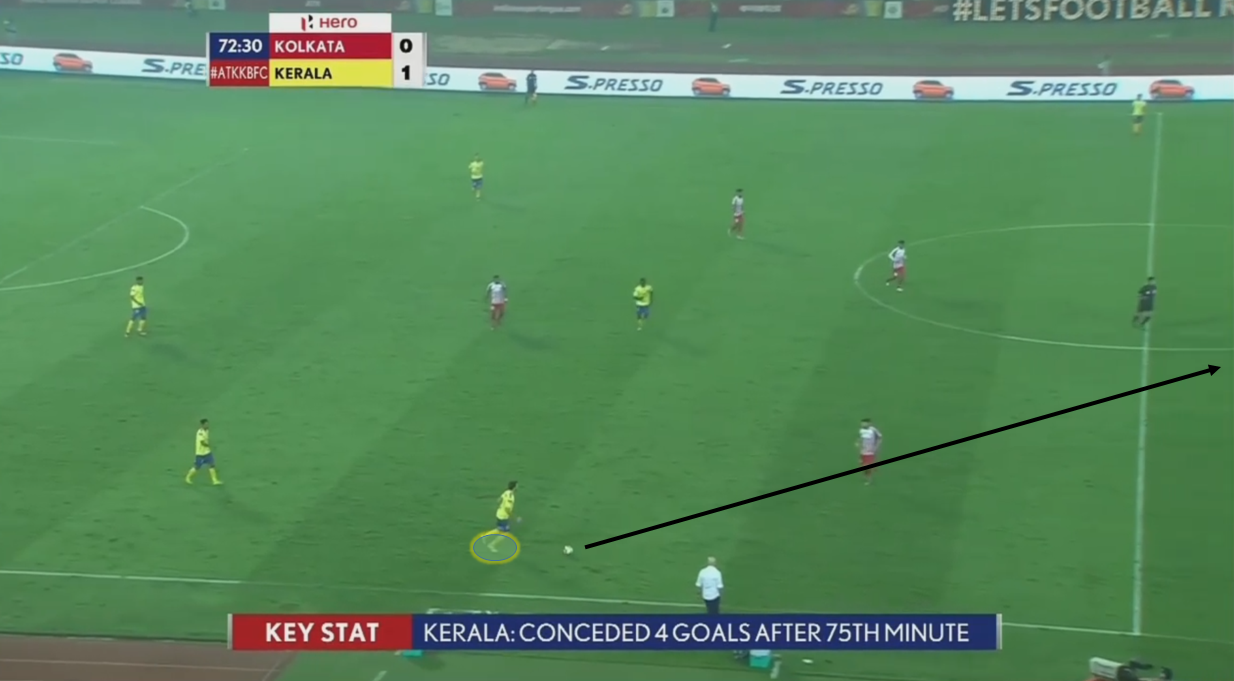 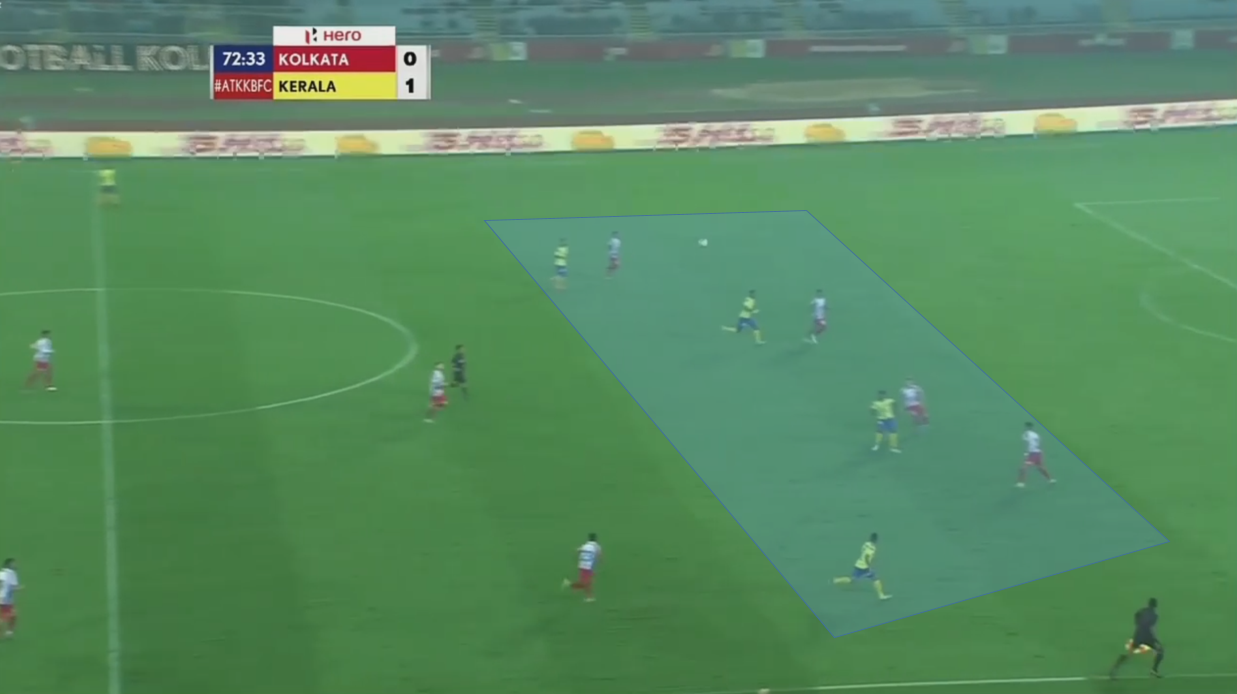 This screenshots clearly depicts the strategy adopted by Schattorie. Rakip stayed back, almost forming a three-man backline. Arqués moved to the right in free space and produced a long ball to the final third. Soosairaj was in a more attacking position and it created a 4 vs 4 situation for the Kerala Blasters.

Schattorie used Ogbeche’s skills of holding up the play. Ogbeche is good in the air and against ATK he was the major factor. He won all five of his aerial duels and influenced most of KBFC’s attack.

In the 69th minute, it was the long ball from Rakip that opened the scoring for KBFC. 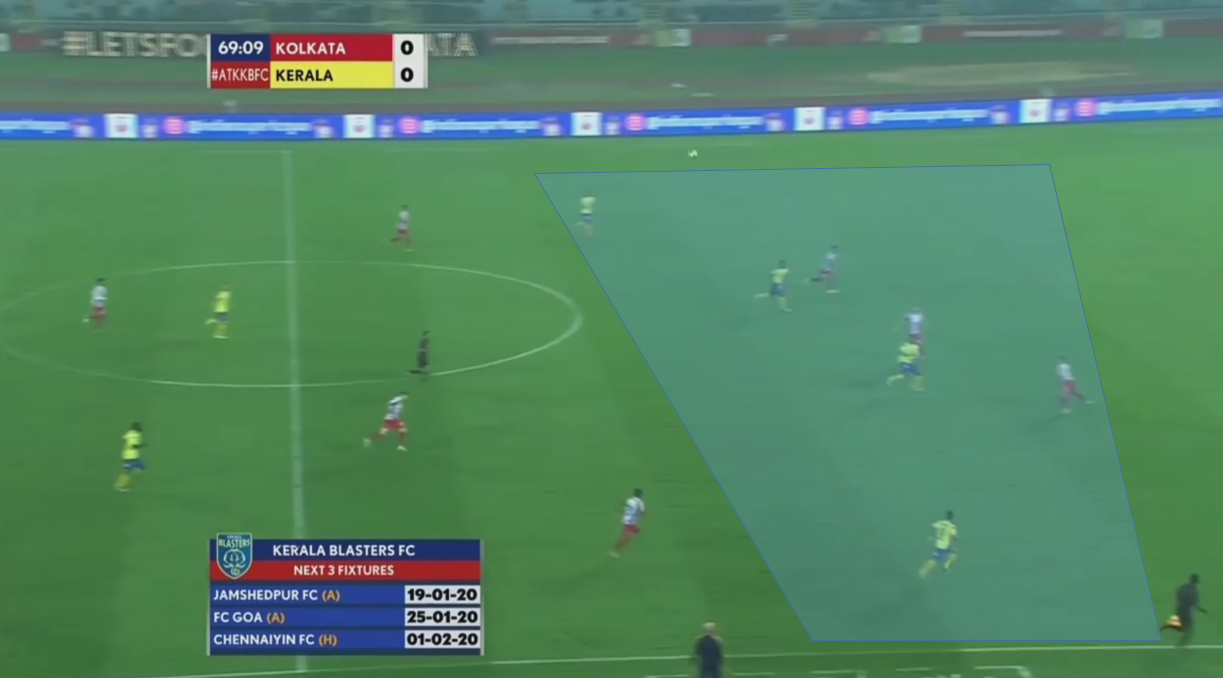 The two forwards pinned the three ATK centre-backs. Soosairaj and Das were up and did not track the run of both the wingers. It created a 4 vs 3 situation in favour of KBFC and the Tuskers took the full advantage. The forwards vied for the ball against the ATK centre-backs. The ball fell in the path of Narzary who drifted in and scored a beautiful long ranger to score the only goal of the evening.

Antonio Habas missed David Williams big time. The Australian scored five goals and provided three assists in just 11 games for ATK. Though it wasn’t his goals that ATK missed the most, it was his link-up play with Roy Krishna that ATK sorely missed as discussed in this analysis.

Balwant struggled to influence the game. He did not drop between the lines and drew out the centre-backs from their position which made ATK’s attack too one dimensional. Though they created a few chances through long balls but couldn’t trouble KBFC goalkeeper, much.
Habas could have taken the advantage of Rakip moving out from his position to intercept the ball from reaching Balwant or Jobby and thus leaving Soosairaj completely free. But the ATK players and the coaching staff overlooked the situation and thus could not give Schattorie a headache.

Schattorie brilliantly changed his approach from possession-based football to a direct approach in the second half owing to ATK’s more attacking intent by pushing the wing-backs in a more attacking role. It left space behind for the KBFC wingers to attack and they took full advantage of it.