And on the other side, Reading kept their mid-table position with ten points and are now holding the ninth spot which they could lose if Birmingham City win in their delayed match.

In this tactical analysis article I will focus on both teams tactics while mainly focusing on Manchester United strengths in attack and in defence in order to have a broader idea of their continuous solid performances this season. But first of all, let’s begin by presenting the line-ups before proceeding to the analysis.

Reading started the game with a 4-4-2 formation with Grace Moloney as a goalkeeper, Kristine Leine as a right-back, Deanna Cooper and Molly Bartrip as centre-backs and Lily Woodham as a left-back.

The second line of the team was composed of Amalie Eikeland on the right-wing, Jess Fishlock and Angharad James as central midfielders and Fara Williams as a left-winger. Ahead of them Emma Harries started for the first time of the season alongside Natasha Harding as strikers.

For Manchester United, the team lined-up according to a 4-2-3-1 formation relying on Mary Earps as a goalkeeper, Ona Batlle on the right flank, Millie Turner and Amy Turner as centre-backs and Kirsty Smith as a left-back.

In midfield, Jackie Groenen and Hayley Ladd were the two central midfielders while Tobin Heath played on the right-wing, Leah Galton on the left-wing and Ella Toone as an advanced playmaker. And Kirsty Hanson was the team’s striker instead of the unavailable Alessia Russo, Christen Press and Lauren James.

Casey Stoney’s team started this match with a clear mindset; building up from the back patiently and looking for overlaps on both wings to create chances whenever there is the possibility of doing so. Therefore, the attacking plans of Manchester United relied mainly on Heath and Halton’s accelerations, crosses and penetrations.

And to do so, Ladd, Groenen and Toon needed to be always attentive to the wingers’ movements in order to launch accurate key passes to those two players. And to a certain degree, Manchester United players were successful in this regard since Ladd’s key pass was the source of the first goal.

You can see in the following picture how Ladd anticipated Galton’s movement and gave her an accurate through pass that enabled the latter to run freely until reaching the six-yard box and scoring without problems. What was even more beautiful in Ladd’s key pass is the fact that it passed through four Reading players who were not able to do anything about it given its precision. 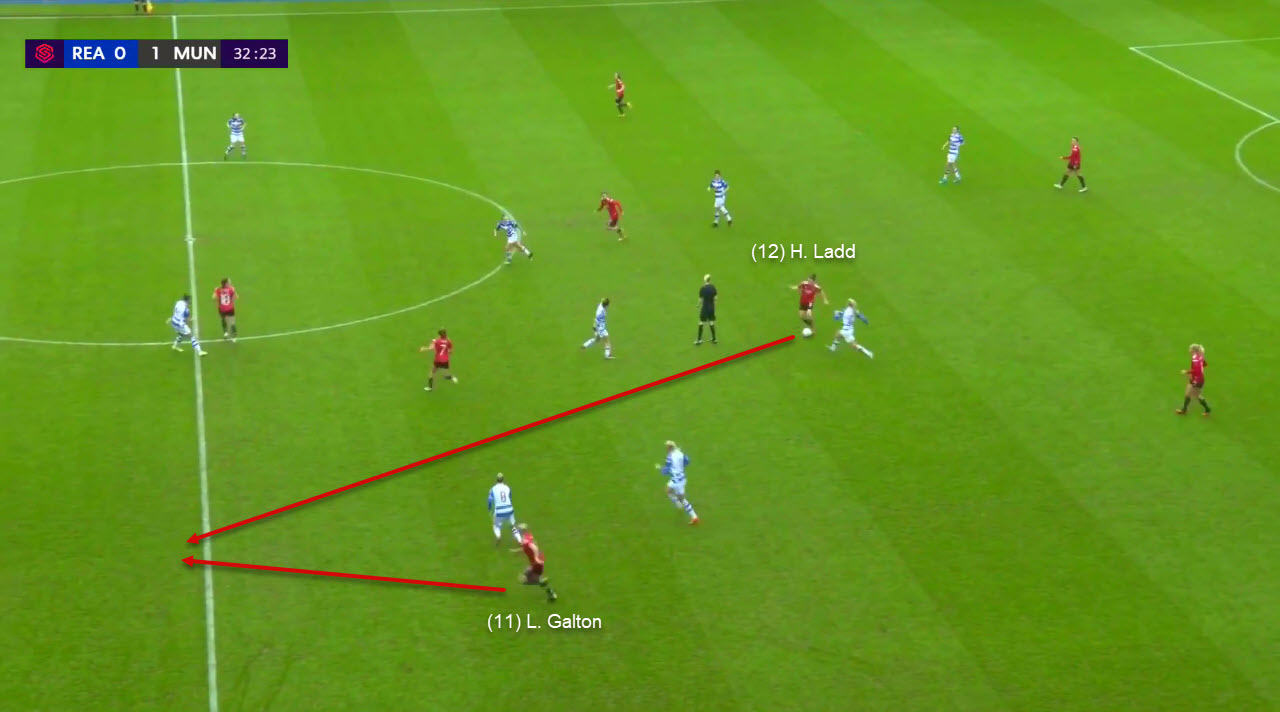 Here, once again, Manchester United were able to break Reading’s high defensive line with an accurate through pass from Toone to her teammate who was yet to run towards the free space behind Reading’s defence. Such key passes were recurrent in this match from Manchester United and they helped the team reach the final third faster and more often. 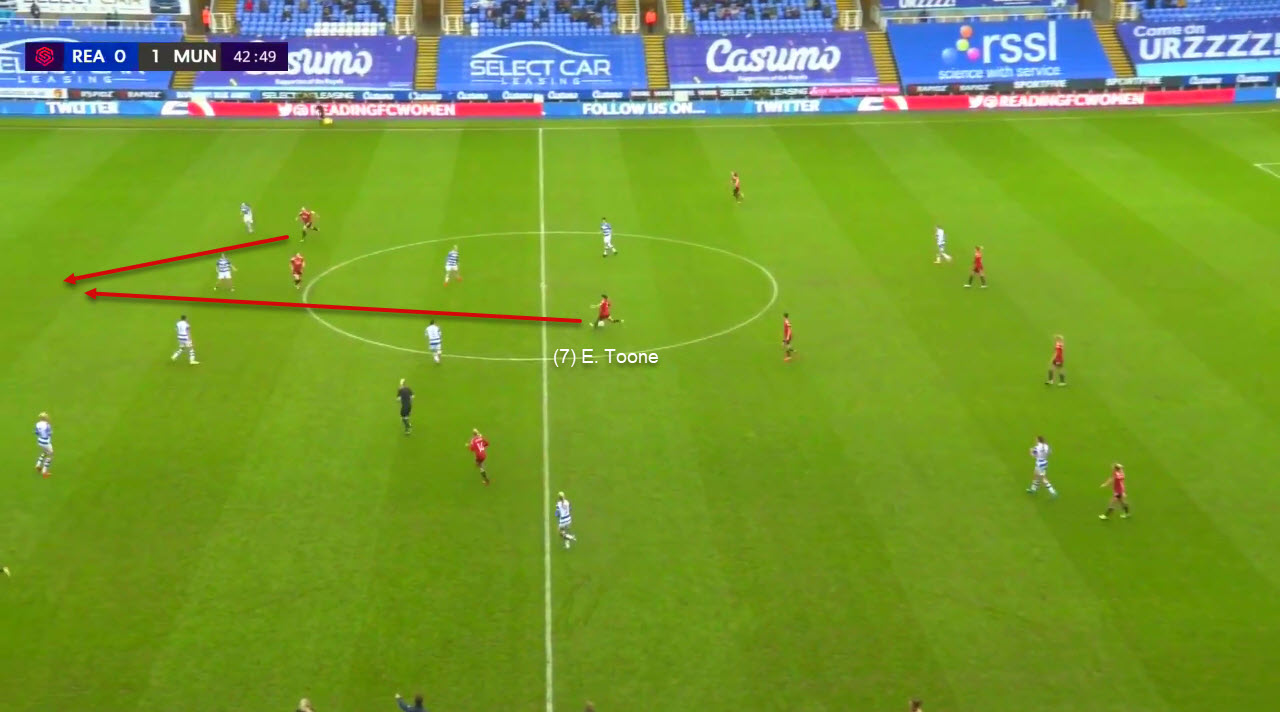 And even though both teams were not effective in set-pieces during this match, Manchester United were more dangerous not only with accurate key passes and wingers’ movements on and off the ball but also with Hanson’s disturbance of Cooper and Bartrip. In other words, Hanson did not remain static during this match and moved a lot vertically and horizontally to help in providing passing options to Toone, Heath and Galton and to confuse her markers by not giving them a reference point since she was moving constantly.

You can see how in this picture for example, Heath took the place of Hanson and was about to shoot or dribble and shoot and Hanson came from behind and overlapped on the right in order to give a passing option for Heath in a dangerous spot. This kind of movements was repeated several times in the match and it was one of Manchester United’s key weapons to confuse their opponent’s defence and an alternative to the absence of the regular starting strikers like Press, Russo and James. 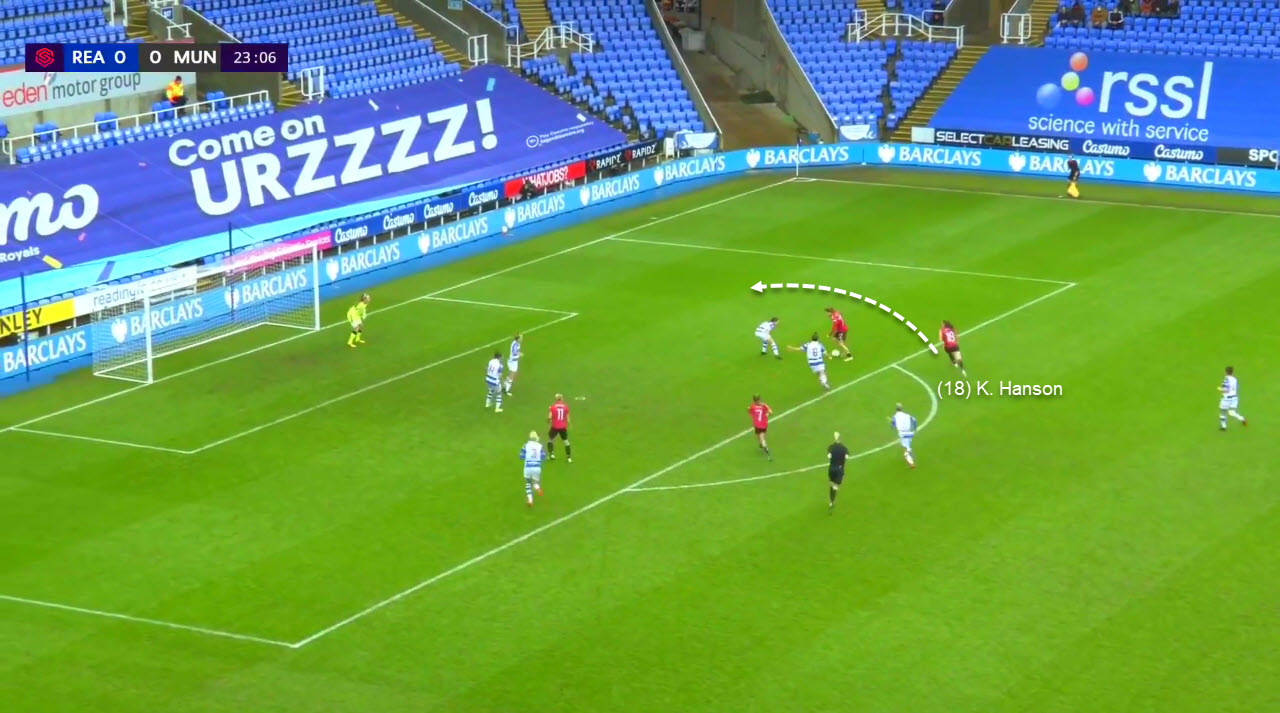 Reading defence was very organised at the start of the match and continued to be like that almost throughout the match except at some occasions due to individual mistakes mainly. The team’s attempts to win the ball started from the two strikers Harries and Harding who made sure both Millie and Amy Turner don’t build-up from the back easily.

At certain times of the match, they were not even able to receive the ball to start the build-up and Earps was forced to make long-balls. Like you can see in this picture, that helped Reading avoid Manchester United’s organised attacks and obliged them to either use long-balls or look for passing options on both flanks. 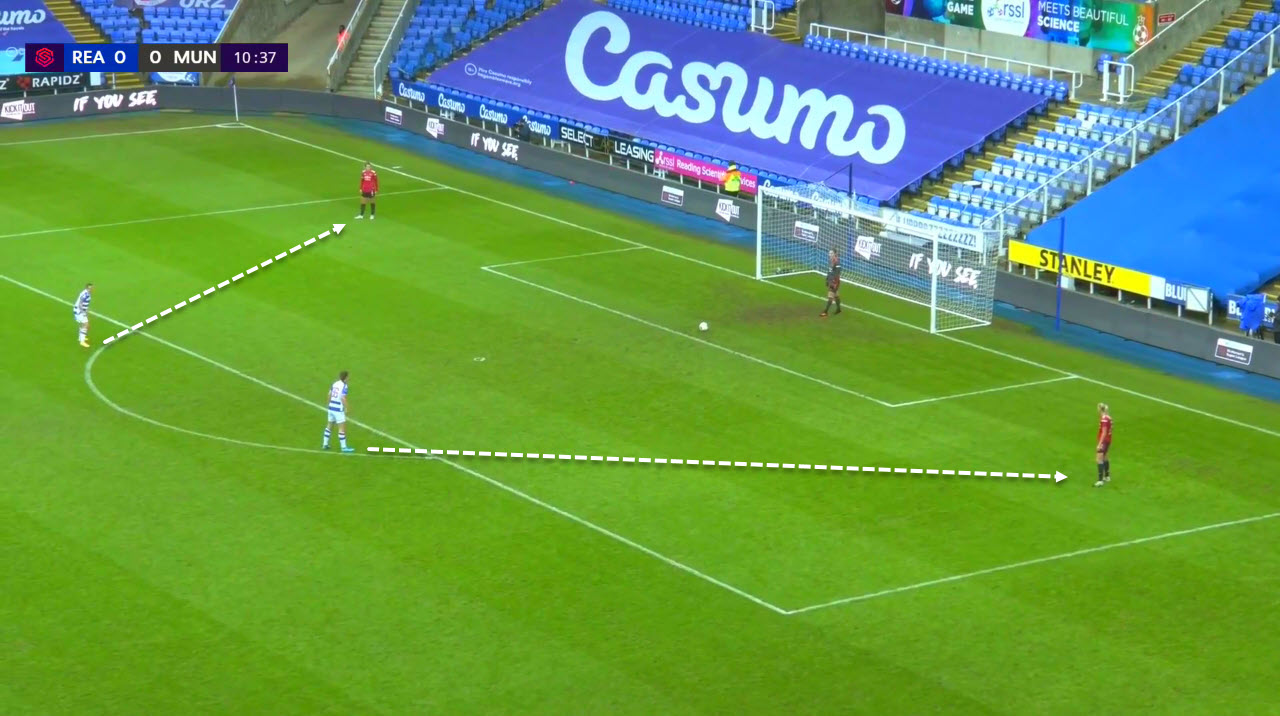 However, as the match went on, Reading defenders made many individual mistakes that could have resulted in more than two goals against them. For instance, the two centre-backs tried many times to advance with the ball while being the “last defender” and in some instances Manchester United players were able to intercept the ball and put Reading in a bad situation. But luckily for the locals, they were missed chances. 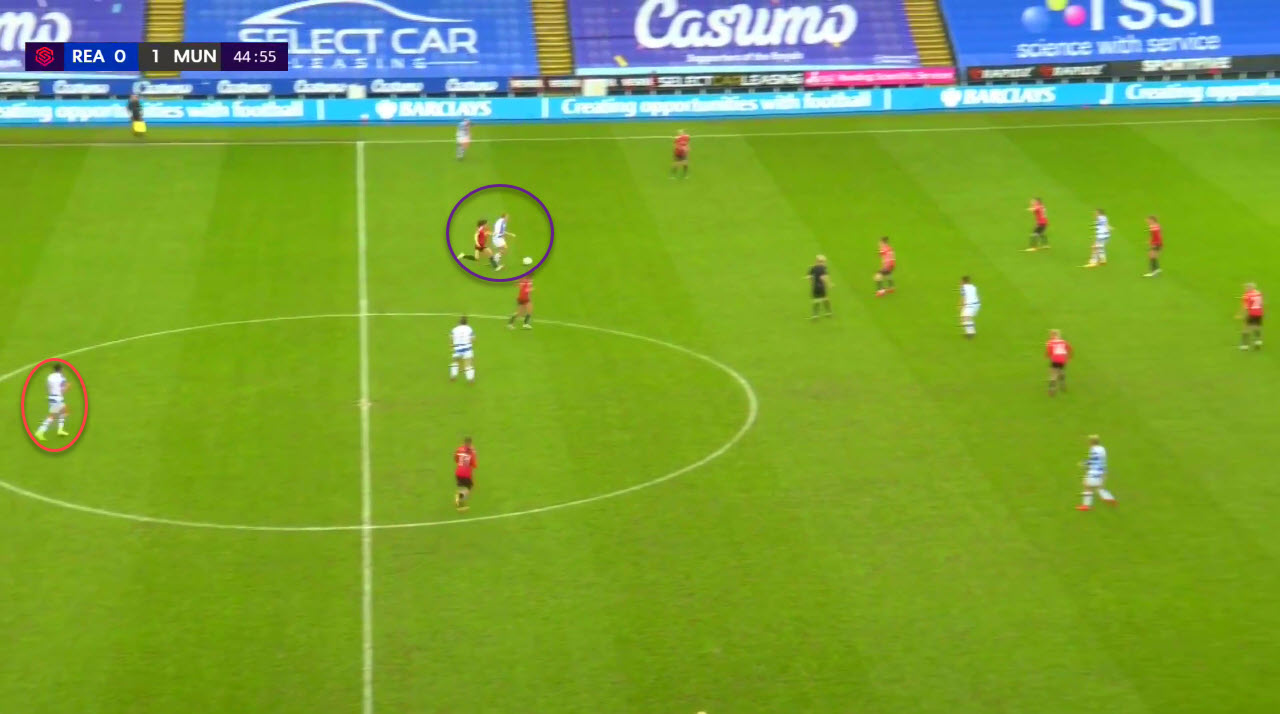 Reading’s defensive performance was good overall, and what counts for this team is their ability to stay focused and organised throughout the match and play with the same determination both in attack and in defence, even though this match witnessed many physical duels and fouls.

Despite being the underdogs in this match, Reading players were able to create many chances in the final third and the collaboration between Harding and Harries was fruitful for the team since the latter was efficient in ball possession, in moving without the ball and in passing to Harding or to the players coming from behind. With her great physical presence inside the box and on the wings at times, Harries was able to disturb Manchester United players constantly and she was also able to win almost all her duels with them.

Moreover, Eikeland and Williams gave a lot of support to the attack and were the ones who gave passes to Harding and Harries mostly while joining them afterwards to give passing options. Also, the 4-4-2 formation helped the team get more numbers forward and remain secured at the back with two lines of defence.

And when in possession, Eikeland and Williams moved forward and one of James or Fishlock was giving support to the attack to create numerical superiority. And even when the ball was lost, one of them was always making high pressing on Manchester United defenders but unfortunately for Reading, the team did not make the best out of that pressing. 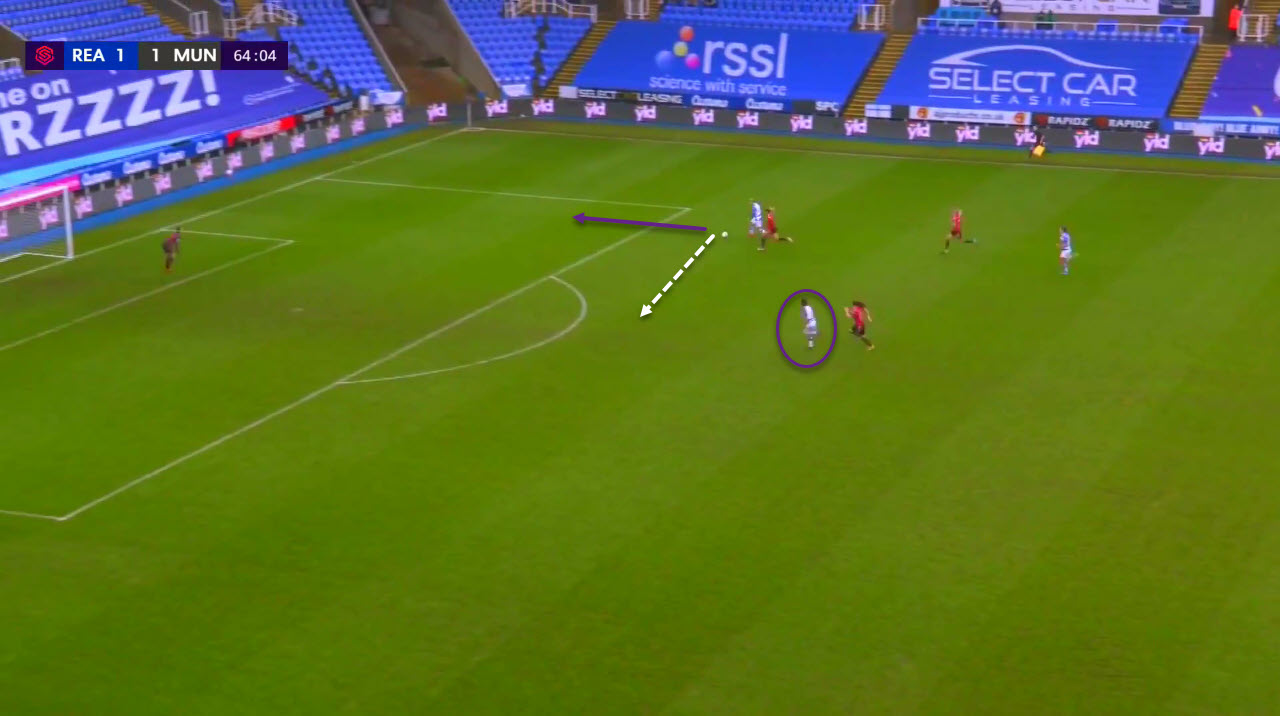 For instance, in this action Fishlock won the ball following her high pressing on Turner and she advanced without noticing that Williams was running to the box and was ready to receive the ball and shoot before Batlle catches her. As a result, Fishlock continued her run and was stopped by Turner who intercepted the ball and prevented Reading from a real goalscoring opportunity.

The game was intense and very physical but at the end of the day Manchester United got the win they needed to remain at the top of FAWSL before Christmas while Reading were not able to get a positive result at home even tough they played a very good match both from an attacking perspective and from a defensive one. And therefore, they need to keep working and performing in a similar and why not a better way in order to gain points from the upcoming matches.