EURO 2020: Our best XI from round three – analysis

The last matchday of the EURO 2020 group stages had a lot of drama and intrigue, with Group F in particular having multiple changes in the teams that would qualify as the matches progressed. There have been some fantastic performers during this round who we have been forced to leave out, and this was certainly the most difficult week in terms of picking just 11 players. 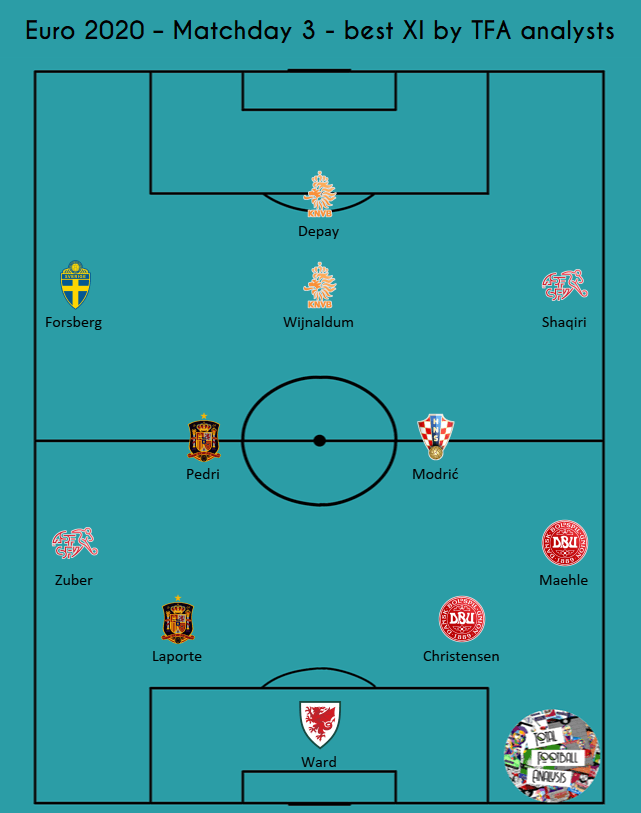 What a match it was for Denmark against Russia and also what a performance by Chelsea centre-back. Andreas Christensen had 89% passing accuracy and won all of his five ground duels while losing only one of his eight aerial duels. To support impressive individual defensive performance he had four successful clearances and wasn’t dribbled past once. Christensen scored a goal for 3-1 to round off his fantastic performance.

Manchester City centre-back had a little better match than Christensen because his team kept a clean sheet. Aymeric Laporte scored his first goal for the Spanish national team which gave Spain two goals advantage over Slovakia. Spain dominated possession and Laporte fit in perfectly by making 88 accurate passes with 98% accuracy.

Hattrick of assists for Swiss left wing-back!  Steven Zuber was incredibly motivated in the attacking phase which reflected on his assists account, he made five key passes and attempted five crosses. Zuber had four out of five successful dribble attempts and even had four shots with two of them going on target, but didn’t manage to get himself on the scoresheet. Defensively he won 8 of his 14 ground duels and made one interception.

Another Danish player finding himself in our best team. Joakim Maehle played on left wing-back just like Zuber, but he is naturally a right-back which adds value to his performance. Maehle won 6 of his 13 ground duels and made two interceptions. On the attacking end, he made five successful dribbles in nine attempts and attempted five crosses. To round off his offensive display he scored a goal after making an impressive run with the ball and scoring from the edge of the box for the final 4-1 result.

Croatian captain delivered when his team needed it the most and his goal put Croatia in front of Scotland which meant that they are through into the knockout phase. After scoring for 2-1 Luka Modrić assisted for the third goal from a corner attempt which found Ivan Perišić on the near post. He dictated the tempo of the match and had 88% passing accuracy putting once again impressive passing numbers by having 7 successful long passes from his 10 attempts and making one key pass. Modrić was always available to receive the ball under the pressure which was vital for Croatia in this match.

Pedri performances in this tournament can’t go unnoticed. Two seasons ago he played his first senior season in LaLiga 2 and now he is having masterclass performances on the biggest European stage for the national team. What he did in the match against Slovakia can’t be interpreted with data. His off the ball movement and ability to make quick decisions under pressure before progressing the ball further is a top class.

Dutch captain shows on this tournament what he can do when he has the offensive freedom and when playing on his natural attacking midfielder position. Three shots and two goals in a 3-0 victory over North Macedonia was enough for us to put him in the best XI of this round. Wijnaldum was all over the pitch and even though he didn’t have too many touches on the ball, his off the ball movement was a difference-maker for his team.

Emil Forsberg is a top player on his day and he showed that on Wednesday afternoon 3-2 win against Poland. Forsberg scored in the 2nd minute his first goal and after attempted 4 shots which led to him scoring another goal in 59th minute for 2-0 lead. He won 6 out of 10 of his ground duels and was fouled three times. Two out of three dribble attempts were successful, but he didn’t manage to find a target with any of his three crosses. His final output was decisive for Sweden to finish on top of Group E.

Xherdan Shaqiri always manages to score attractive goals on the big stage and in the match against Turkey he again showed he produces moments that will be on highlight reels for years to come. Shaqiri attempted seven shots, four on target and two of them were goals. He made two key passes and had four successful long balls in five attempts. Shaqiri performance was vital for Switzerland to reach the knockout phase.

The new Barcelona signing performed on a high level through all three matches in the group stage. Memphis Depay scored the opener against North Macedonia before assisting twice for Georginio Wijnaldum. That duo showed a top-quality understanding on the pitch which gave them an edge over the opponents in the group. Depay missed one big chance and had all three dribble attempts successful. He won 5 out of his 7 ground duels and was fouled twice. We are looking forward to his magic in the match against the Czech Republic on Saturday in the knockout phase.

Adam Scully (@ascully24) – This was certainly the toughest round of games to select from. There were numerous incredible performances in the final round of the group phase. Georginio Wijnaldum scored twice to help the Netherlands ease to victory over North Macedonia while Luka Modric had a vintage performance against Scotland to help Croatia narrowly escape the group on the final day, scoring a beautiful goal with the outside of his boot. Aymeric Laporte was had one of the most underrated performances of the week, keeping a clean sheet in a 5-0 victory over Slovakia, scoring a goal too and maintaining a passing accuracy of 98%. However, for me, the Player of the Round this week deserves to go to Pedri. The young Spaniard was nothing short of sublime against Slovakia and was so mature, showing shades of a certain Andres Iniesta. His ability to push between the lines in the halfspace and receive the ball, quickly turn, and play forward or to a nearby player is fascinating. Pedri will certainly be a special talent and against Slovakia, it showed why.

Harshal Patel (@HarshalPatel93) – I am really glad to see Pedri in the XI – he has been one of Spain’s best players of the tournament so far, and played a big role in their 5-0 win. I would have loved to see Marco Verratti, Paul Pogba, Robert Lewandowski, Karim Benzema, David Alaba, Harry Maguire, Sergio Busquets and Pablo Sarabia make it to the XI this week – not to say that I do not approve of our lineup, but this just goes to show how many excellent performers there were during this round of matches.

Mario Husillos Jr. (@CamusUno) – in this round of matches, I think Luka Modrić was the best player. He appeared when Croatia needed him most and had a fantastic performance against Scotland in Hampden Park. His personality and quality made him dominate the midfield and the game was played at the tempo he decided. He also scored the best goal of the round and assisted Perišić to round up another top match. I really enjoyed Pedri’s performance too. At 18, under lots of critics for Spain’s poor first two games and with the urge to win, he controlled the match and made Spain play their best football so far in the Euros. After a fantastic first season at Barcelona, it’s hard to say I’m surprised but he still makes everything look so easy and looks like he been playing elite football for 15 years.

Toni Bilandžić (@ToniBila17) – Impressive round with many incredible performances by star players. The Player of the round for me is Luka Modrić. We know that he isn’t labelled as someone who scores often, but he proved clutch once again when Croatia needed him the most. His ability to make perfect passes with outside of the foot can be seen in each match he plays, but this time he scored a goal with the outside of the foot and it was beautiful, especially if you are Croatian. Pedri had a magnificent match once again and arguably one of the best players of the tournament so far. Emil Forsberg and Xherdan Shaqiri led their teams to the second round with both of them scoring twice in the last group match. 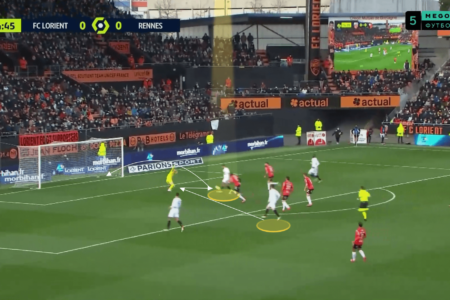 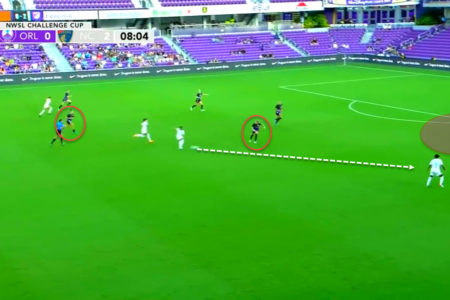