We reached the EURO 2020 knockout phase and there were some vintage matches in the round of 16. Four of eight matches were decided after regular time with one going all the way to the penalties. Who would have thought that all three teams from “Group of Death” will be eliminated in their first knockout matches? Monday brought us two thrilling matches which both ended 3-3 after regular time and probably the biggest surprise from the round of 16 was that Switzerland got the edge over the world champions France after Yann Sommer saved the penalty from PSG superstar Kylian Mbappe. The most convincing victory was Denmark over Wales with a 4-0 win. There was a lot of quality performers and it was once again hard to decide who to put, so we had to cheat a little by putting Luke Shaw as the left centre-back to find a place for another left-back Oleksandr Zinchenko who had a massive match for his country in the extra-time win over Sweden. 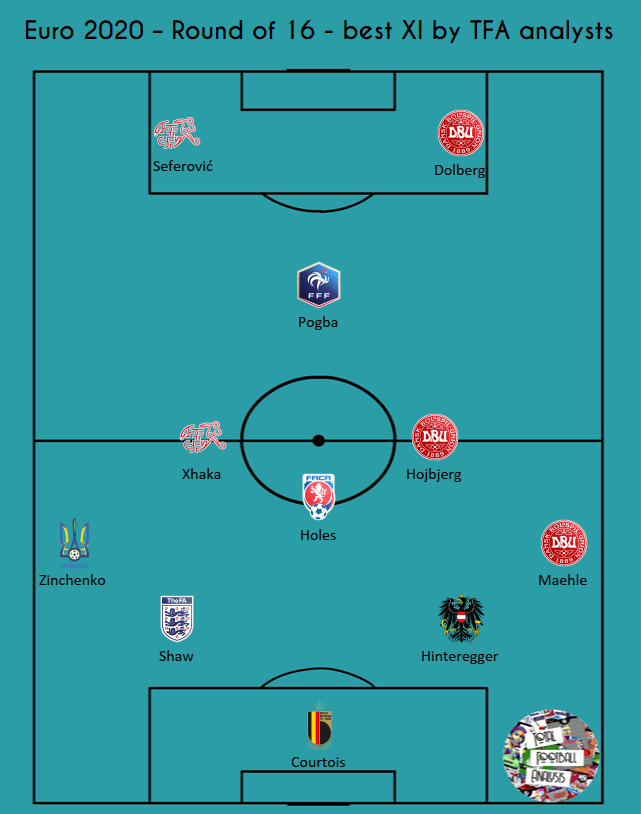 Belgium no.1 made some crucial saves in the match against Portugal and kept a clean sheet which was enough for them to win by 1-0. Portugal had 23 attempts, but only four of them were on target and Courtois saved all four of them. Three shots were from inside the penalty area which adds additional value to his performance. In matches like these top-quality goalkeepers are vital to make routine saves and keep concentration through the whole match.

It was hard to see Austria lose after such a performance by their defenders especially by Eintracht Frankfurt’s Martin Hinteregger who was incredible. His defensive contribution in this match was: 2 clearances, 2 blocked shots, 3 interceptions and 4 tackles. He won five out of eight ground duels and two out of his four aerial duels. His passing was pretty accurate and he found the target with 68 passes which were 84% accuracy. Pretty good performance by Austrian centre-back, he showed fantastic positioning and focus throughout the whole match which was enough for us to pick him in our best XI.

Luke Shaw was crucial in both goals against Germany and could easily be labelled as the man of the match. Shaw assisted for Raheem Sterling’s opening goal and for the second goal made a crucial interception in the middle of the pitch before making a key pass towards Jack Grealish who assisted for England skipper Harry Kane. Shaw had 91% passing accuracy and had three crosses. Shaw wasn’t dribbled past once and he contributed on both ends of the pitch. If we didn’t put him on centre-back the other logical choice would be his club teammate Harry Maguire who had a massive match as well.

What a match for Oleksandr Zinchenko! Zinchenko is worthy for both Manchester City and Ukraine because of his versatility and he will do his job whether he plays on left-back, central midfield or left-wing. Zinchenko first scored a goal for a 1-0 lead before assisting with a perfect cross to Artem Dovbyk in the 120th minute for a 2-1 win. He had three successful crosses in seven attempts and had 87% pass accuracy. Defensively Zinchenko made four clearances and three tackles while winning both of his aerial duels and five out of six of his ground duels. Performance worth the best XI of this round and one of the best performances in the tournament so far.

The second matchday in a row Joakim Mæhle is in our best XI. Mæhle once again started on left wing-back and after few changes ended on his natural right side from where he scored for 3-0. It was an impressive finish after sending the opponent the wrong way and striking the ball in the near corner. Once again he had a quality offensive impact and had three successful dribbles from six attempts and also had two shots on target. Defensively he was top class, he won seven out of eleven of his ground duels and made three clearances.

The unexpected hero for the Czech Republic. It was a narrative of how he wears a number 9 and is a defensive-minded player, but in this match, he was decisive in the attack. Holeš had two shots on goal and one of them ended in the back of the net which put his team in front against the Netherlands. Even though he wasn’t very precise with his passing (68%) he managed to make two key passes, create one big chance and assist Patrick Schick for a second goal. Of course, he didn’t neglect his defensive responsibilities and he won five out of his seven ground duels and three out of his four aerial duels. Holeš had four tackles, two clearances and one interception which rounds up his impressive performance.

Switzerland captain led his team to one of their biggest victories in European Championships and their first win in a knockout match on European Championship in their history. He managed to have 81 successful passes with 93% passing accuracy while facing Ngolo Kante on the other side. All eight of Xhaka long pass attempts were successful which is impressive to see. He made two interceptions, two tackles, one clearance and blocked one shot in the defensive phase. Xhaka made a top-quality assist towards Mario Gavranović who scored for 3-3 in the 90th minute. One of Granit Xhaka best performances we witnessed.

Pierre-Emile Højbjerg is performing well throughout the whole tournament and he is a crucial piece of the puzzle for his country. He could’ve been in our best XI in the last matchday as well. Højbjerg was all over the pitch against Wales and dominated the middle of the park with his midfield partner Thomas Delaney which limited Aaron Ramsey abilities. He was a reliable passer and he had 90% passing accuracy and found the target with two out of three long pass attempts. Højbjerg is 2nd on the assist table with three assists just one behind Steven Zuber.

Manchester United midfielder had another vintage performance in this tournament and it is a little unfortunate that we won’t be able to watch him in the quarter-finals. Pogba scored the best goal of the round with a long shot into the top right corner of Yann Sommer goal. He had 72 successful passes with 92% passing accuracy, he had five long pass attempts and three of those found his teammate. Pogba was dominating with his penetrative runs and dribbling, he had five successful dribbles out of six attempts. He won 10 out of 16 of his ground duels while also making two successful tackles. He contributed a lot on both ends of the pitch.

Two headers, two shots on target and two goals for Haris Seferović against France. There isn’t a lot we can add other than his work rate, but when you score twice against the World Cup holders and your team goes through there isn’t much more you can do. Benfica’s forward scored in the match before and he is now on three goals of the tournament which keeps him in a race for the best goalscorer of the EURO 2020.

The third Danish player we picked in our best XI is Kasper Dolberg. He got his first 30 minutes in the tournament in the 3rd match in the group after Youssuf Poulsen was injured which meant he will get the opportunity to start in a match against Wales. Dolberg was locked in and he scored the first two goals of the match putting his team in front 2-0. He had four shots with three of them being on target and he missed one big chance which could earn him a hattrick. He won six of his eight ground duels and was successful in both of his dribble attempts. It will be interesting to see can he keep the goalscoring form in the match against the Czech Republic.

Adam Scully (@ascully24) – It was extremely difficult to choose the best eleven players from what was an exhilarating round of tournament football and it was even harder to select the best player from the Round of 16 overall. There were some fantastic performances spread out over the eight matches. Thibaut Courtois was excellent in net for Belgium and was arguably the main reason Roberto Martinez’s side managed to come away with a narrow 1-0 victory despite being well below-par. Paul Pogba and Granit Xhaka tried to outdo each other in what was an utterly glorious match from a fans’ perspective and Haris Seferovic bullied the French backline to score a brace that helped Switzerland take the world champions to penalties where they managed to knock them out of the competition. Despite losing 2-1 in the end, Thomas Hinteregger had a fine performance for Austria, keeping the Italian at bay for the entire 90 minutes of normal time, whilst Joakim Mæhle and Pierre-Emile Hojbjerg ripped a good Welsh side to shreds with a 4-0 victory. However, the performance of the round for me was a different Danish player, Kasper Dolberg. The Nice centre-forward scored a brace back on his own stomping ground and had more shots than any other player on the pitch. His pressing was excellent, and his work rate was second to none. Hopefully, for Denmark, Dolberg has hit form at a perfect time for them en route to what could be a fairy-tale story of them reaching the final.

Harshal Patel (@HarshalPatel93) – This was a superb round of matches, with Monday being possibly the best day of football I have ever experienced. It was really difficult to pick just XI players, once again, and I would have loved to see the likes of Harry Maguire, Karim Benzema and Sergio Busquets in the lineup, but overall I think our XI is quite good. Pogba was possibly the best player of the round, and certainly did not deserve to be knocked out in the manner that France were, while Denmark were excellent and have become my outside bet for winning the tournament now.

Mario Husillos Jr. (@CamusUno) – for the second time in the EURO 2020, Paul Pogba was the best player in this round of matches in my opinion. Despite France losing on penalties to Switzerland, Man United’s midfielder had a fantastic match in which he defended, got the ball forward with some fantastic passes and carries, physically dominated the midfield and scored the best goal of the round of 16. He also scored his penalty in the shootout so there isn’t a lot more he could have done for his team. I would like to mention Unai Simón’s performance too. Despite conceding the worst goal in the tournament, the Spanish goalkeeper stayed calm, was excellent in the distribution (he even started the play of one of the Spanish goals) and kept Spain in the game with some fantastic saves. Doing that at 24 and after his mistake deserves recognition.

Toni Bilandžić (@ToniBila17) – We couldn’t imagine a more exciting round of matches than what we witnessed. A lot of surprising results happened and it led to some surprising performances by the players we didn’t expect. Oleksandr Zinchenko had a massive performance and I liked every single second of it while also Paul Pogba produced another quality performance even though his team lost. However, a player who impressed me the most was on Pogba’s opposite side, Granit Xhaka. He is often criticized by the fans and media, but this performance will keep them quiet for some time since he faced Pogba, Kante and co. and beat them while contributing on both ends of the pitch. His long passing and ability to make the right decisions under pressure was a joy to watch. 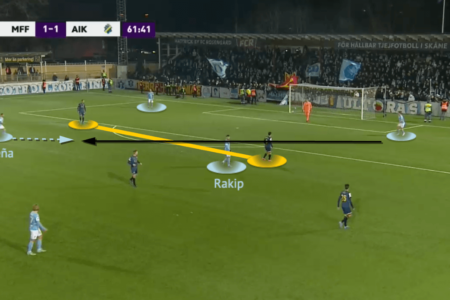 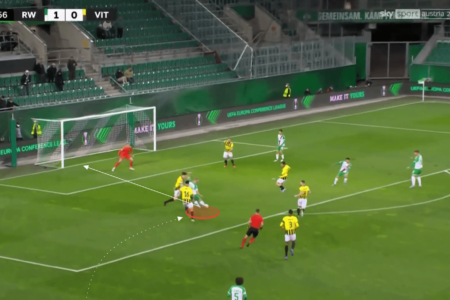 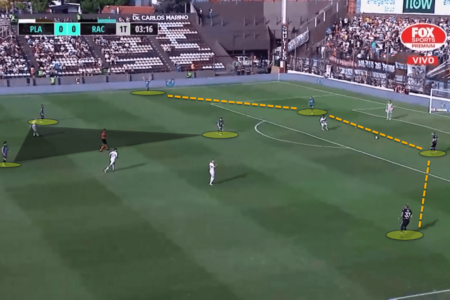