In the final 90 minutes of the first Bundesliga matchday since the league’s return, Werder Bremen hosted Bayer Leverkusen in a matchup of two clubs at opposite ends of the table. Bremen have had an overall disastrous campaign after starting the season with European aspirations, while Leverkusen have scored the fifth-most goals in the league and are in the midst of a heated Bundesliga title race. This tactical analysis will dissect how Leverkusen were able to outplay Bremen on both sides of the ball. 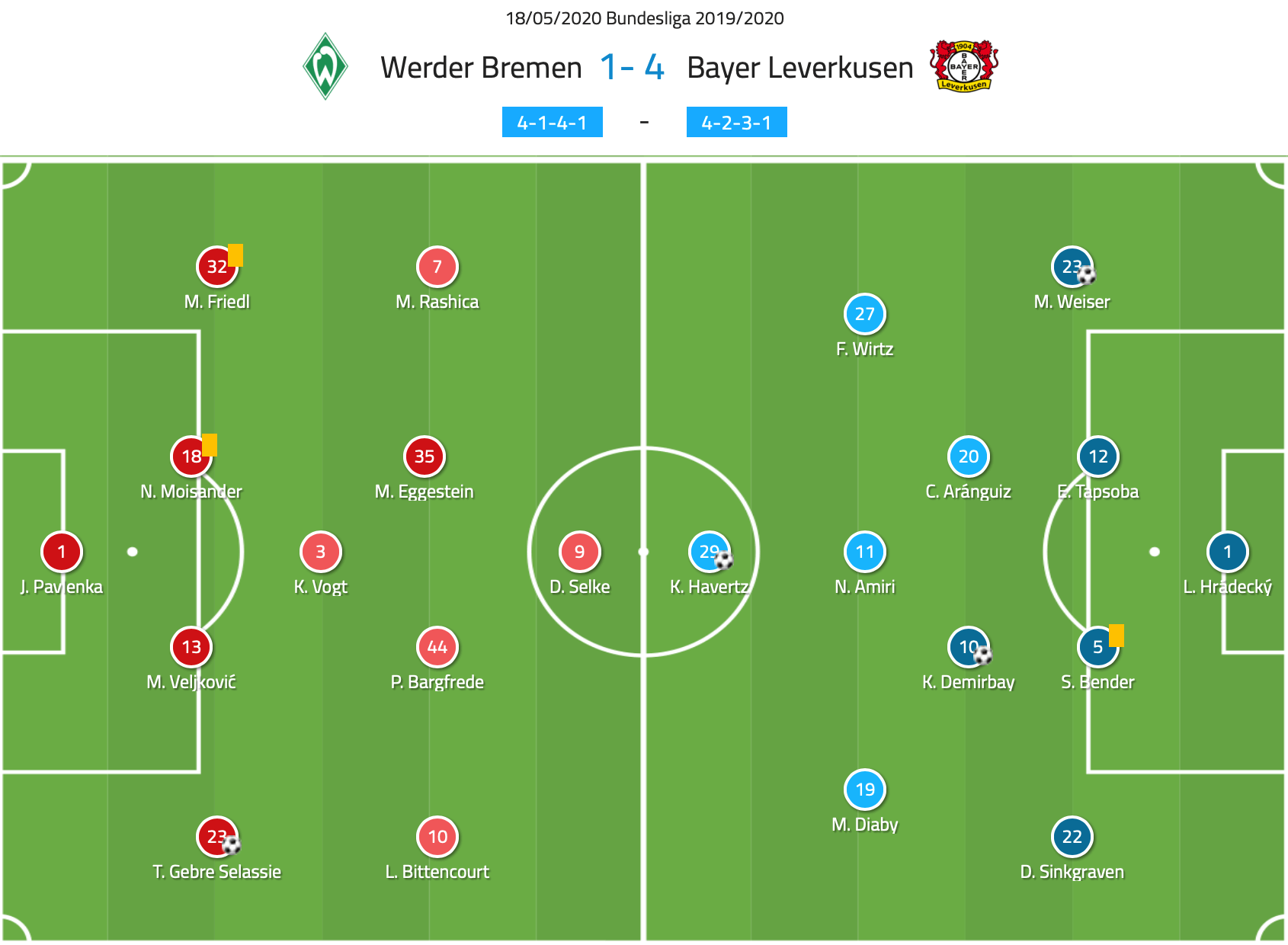 Bremen manager Florian Kohfeldt had to make do without a few usual starters, most notably Davy Klaassen who was suspended on yellow card accumulation. Theodor Gebre Selassie, Miloš Veljković, Niklas Moisander, and Marco Friedl made up the back four, with Kevin Vogt dropping back centrally at times to form a back five. Philipp Bargfrede and Maximilian Eggestein supported Leonardo Bittencourt, Davie Selke, and Milot Rashica in attack.

Despite Kevin Volland and Lars Bender sitting out with injuries, Leverkusen had the depth to still start a strong lineup. Mitchell Weiser, Edmond Tapsoba, Sven Bender, and Daley Sinkgraven started in defence, with a midfield of Charles Aránguiz, Kerem Demirbay, and Nadiem Amiri in front of them. Manager Peter Bosz opted to start Kai Havertz up top, with Florian Wirtz and Moussa Diaby beside him. 17-year-old Wirtz became the third-youngest player to debut in Bundesliga history after signing from FC Köln in January.

As expected, Leverkusen controlled a majority of the possession this match, with Bremen defending via a mix of the press and a medium defensive block. Leverkusen would attempt a majority of their attacks through the wide areas, luring the opposing ball-side winger and midfielder forward or inside before completing passes to a high full-back or winger, who would from there complete passing combinations towards goal. Against a slightly relaxed press/defensive block below, Aránguiz found ample space in the middle of the pitch. Demirbay and Diaby both shifted centrally, carrying their respective defenders with them. These two off the ball movements provided both space and time for Aránguiz to connect with Sinkgraven down the left touch line. 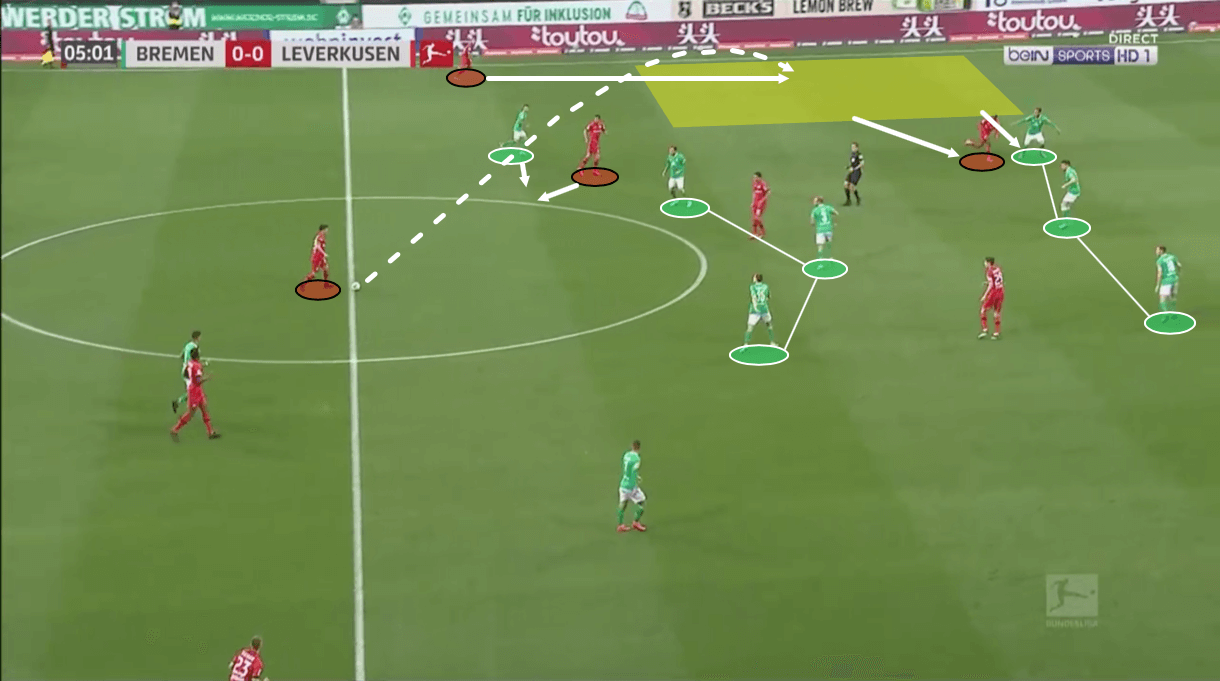 The availability of space in the wide areas was also aided by the narrowness of Bremen’s defensive structure. In the following scenario, Wirtz received the ball in the advanced left half-space and dribbled centrally towards the top of the box. This movement along with Havertz’s central run drew the right-back inside, opening up space for Diaby to exploit down the left half-space. 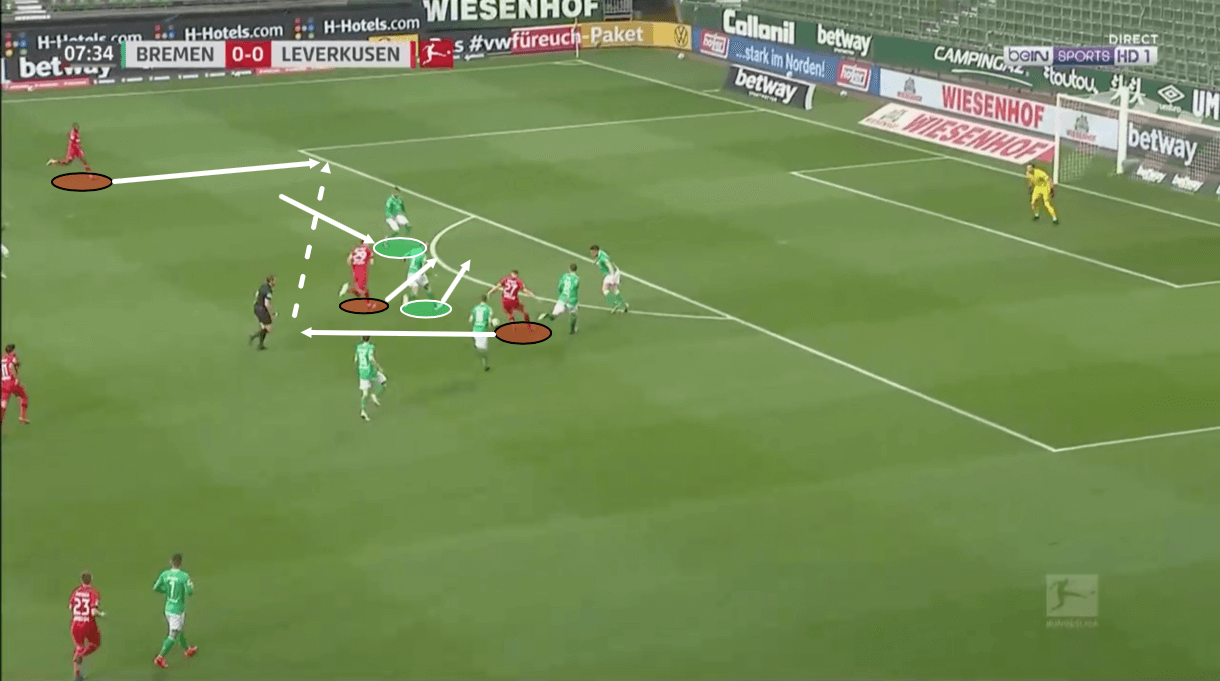 This method of bypassing Bremen’s press followed by directional play continued to work for Leverkusen throughout the match, including playing a major role in their third goal. Below, Leverkusen have progressed quickly after gaining possession of the ball deep in their own half. Bremen counterpress pressures nearby opposition but leaves Diaby in space in the wide area. 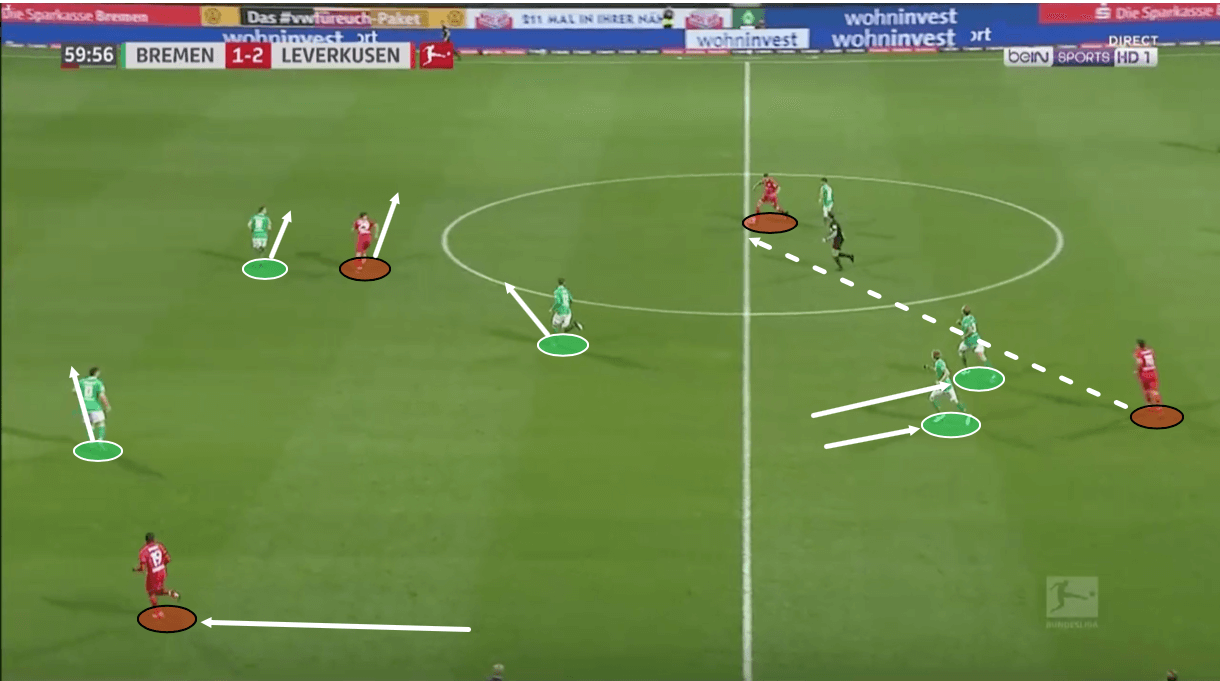 Thanks to a combination of Bremen’s high numbers on the previous counter and Leverkusen’s movement in space, Diaby is able to complete a free run into a dangerous area. Havertz completes a diagonal pass to the Frenchman past Bremen’s poorly organised back line, and Diaby eventually chips in a cross which Weiser heads in. 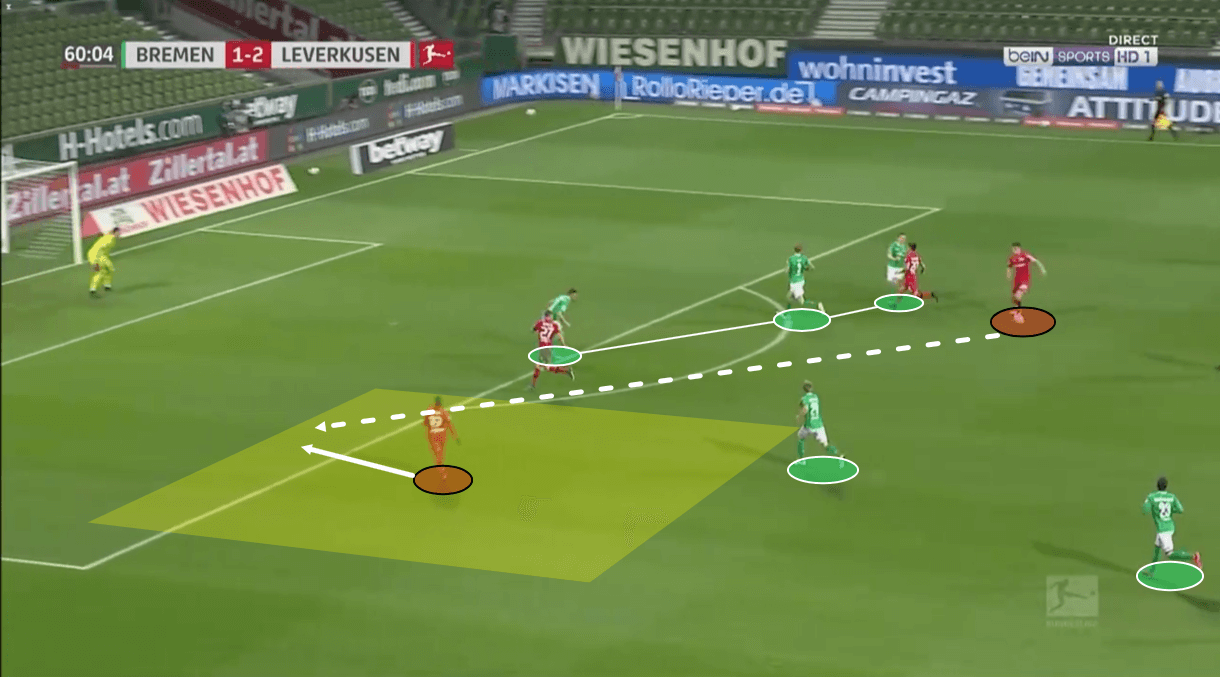 The player combination with the most passes into the final third for Leverkusen was Demirbay to Diaby, with eight successful connections- no other combination had more than four. This amplifies the intent and prolificity Leverkusen found in this tactic.

During the few stretches when Leverkusen possessed the ball but couldn’t find space wide, the deeper midfielders Demirbay and Aránguiz would attempt forceful through passes between the channels of the defence. Demirbay and Aránguiz were both fruitful in their progressions with 11 of 12 successful passes into the final third and 18 of 20 respectively. 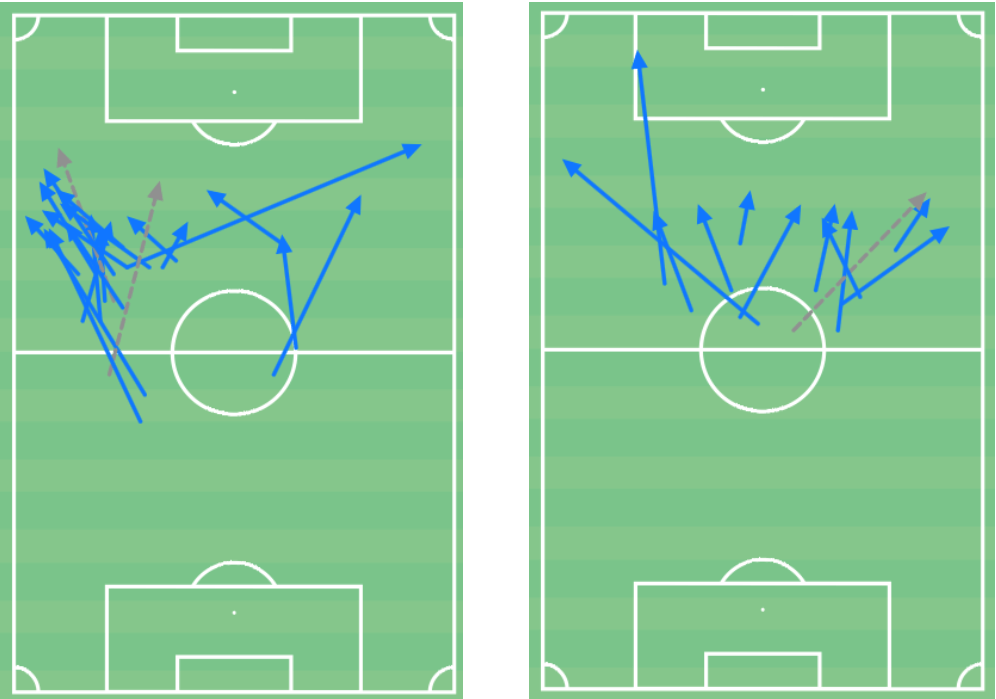 On the other side of the ball, Leverkusen’s press was highly impressive. When Bremen did manage to possess the ball, Leverkusen were efficient in applying their counterpress in all areas of the pitch. In the example below, Bremen have completed a backward pass in an attempt to invite Leverkusen’s press. The intention here is to lure numbers forward in order to open up space behind them in which to complete long attacking passes. With the ball-side winger Wirtz pressing the ball directly, the striker and far-side winger press the two centre-backs while the attacking midfielder and ball-side full-back press the nearest midfielders. This suffocation results in a Bremen turnover. 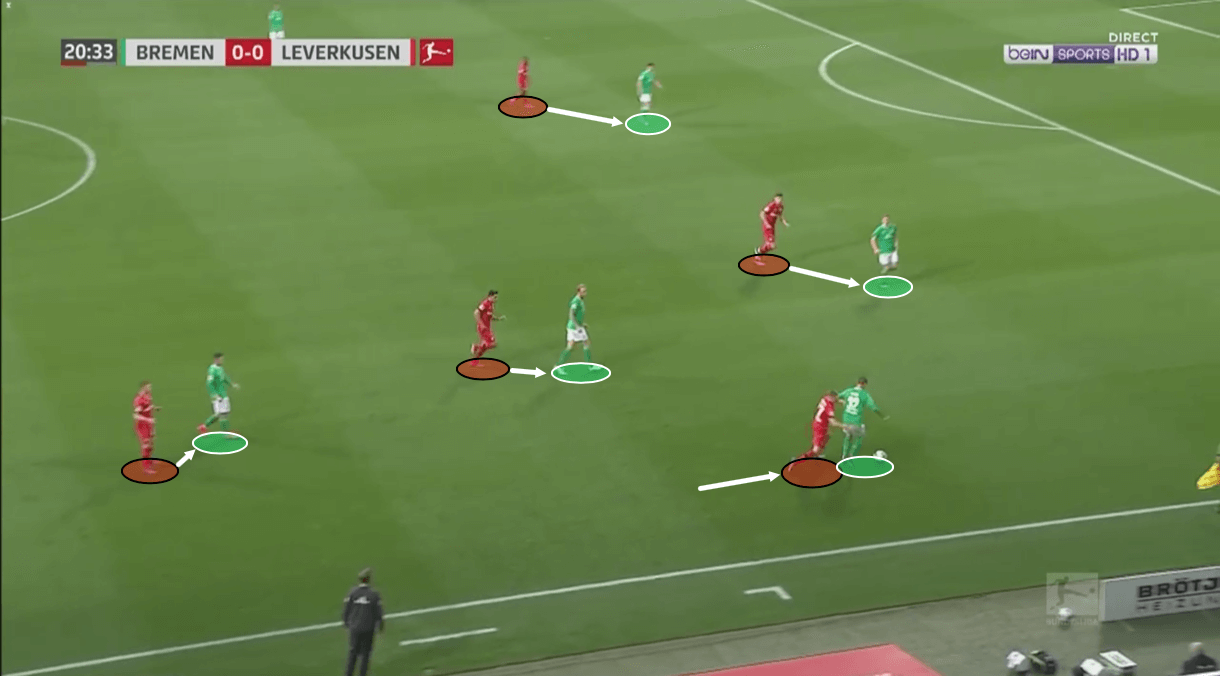 Leverkusen’s press was outstanding at preventing many counter-attacks. In this counterpress below, Diaby’s pass inside doesn’t find a Leverkusen attacker and is intercepted by Vogt. Immediately, Wirtz, Amiri, and Weiser all press the ball and two passing outlets respectively. Vogt’s pass falls short due to the pressure, and Wirtz promptly regains possession. 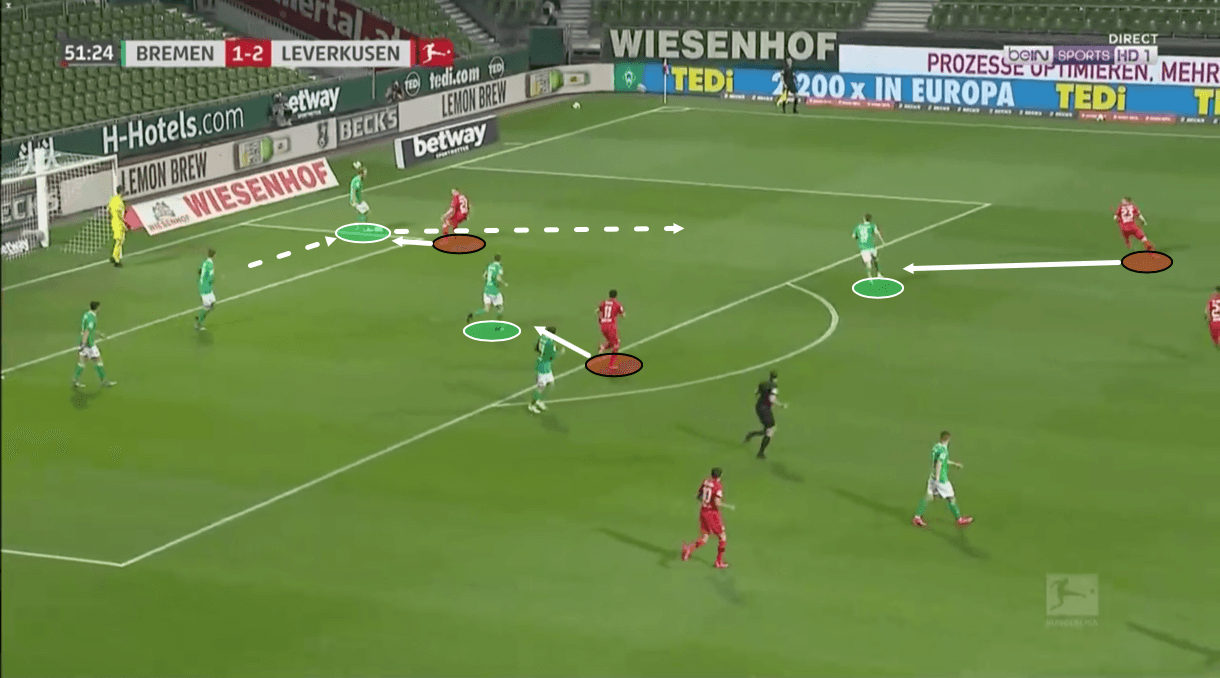 Inevitably, there were moments when Bremen were able to get past Leverkusen’s press. During these quick attacks, two primary factors often nullified them: either Bremen would make erroneous mistakes in the buildup or final third, or Tapsoba would disrupt the attack. In the example below, Vogt drops back to aid in passing buildup from the back. This extra outlet nearly catches Leverkusen’s press off guard. A quick ball rotation at the back relatively puts the Havertz out of play. Amiri is pressing the deeper midfielder, meaning the ball-side winger Diaby is forced to press the ball-possessing centre-back. Additionally, Bremen winger Bittencourt has dropped inside to provide another passing option. This leaves Bremen right-back Gebre Selassie open, and would have created a 2v1 in favour of Bremen in the wide right channel were it not for the pass from Bittencourt to Gebre Selassie disconnecting and rolling out of play. 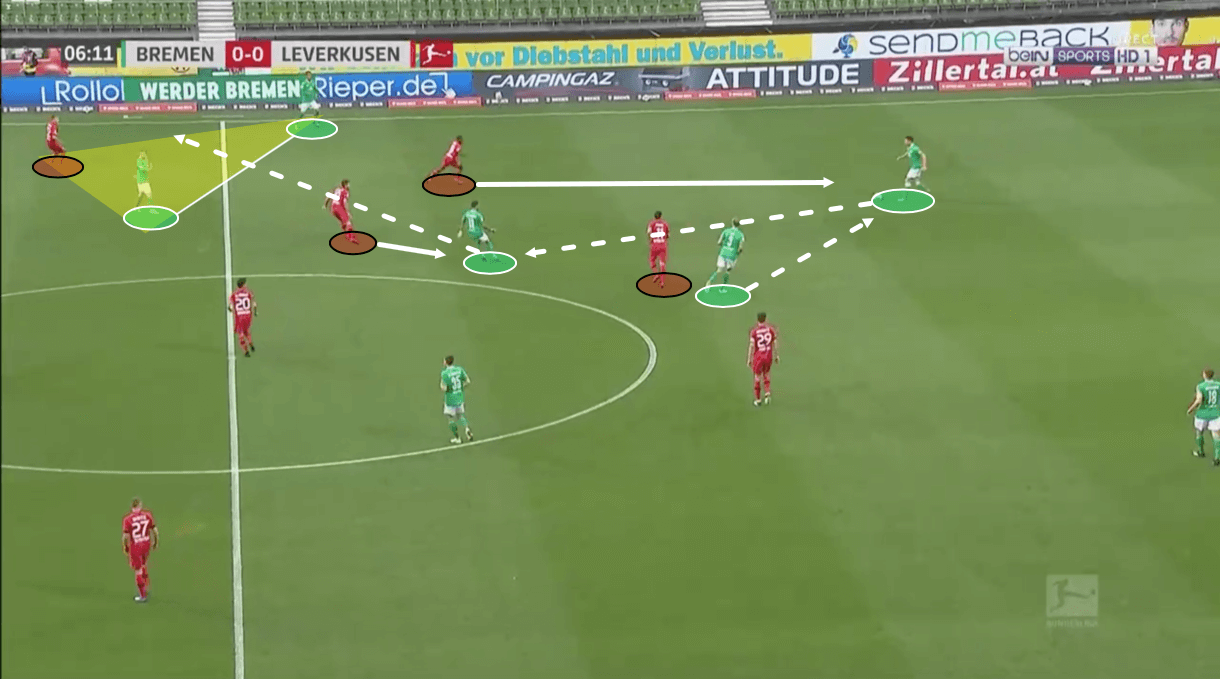 Below, in a scenario in which Bremen successfully advanced the ball past Leverkusen’s midfield, Leverkusen’s back line remained structured. Even after the pass into the box was completed, this level of organisation allowed Tapsoba to fully take on the possessor without worrying about any potential passing options around him. The Burkinabé centre-back tackled the ball away and immediately transitioned play into an attack. 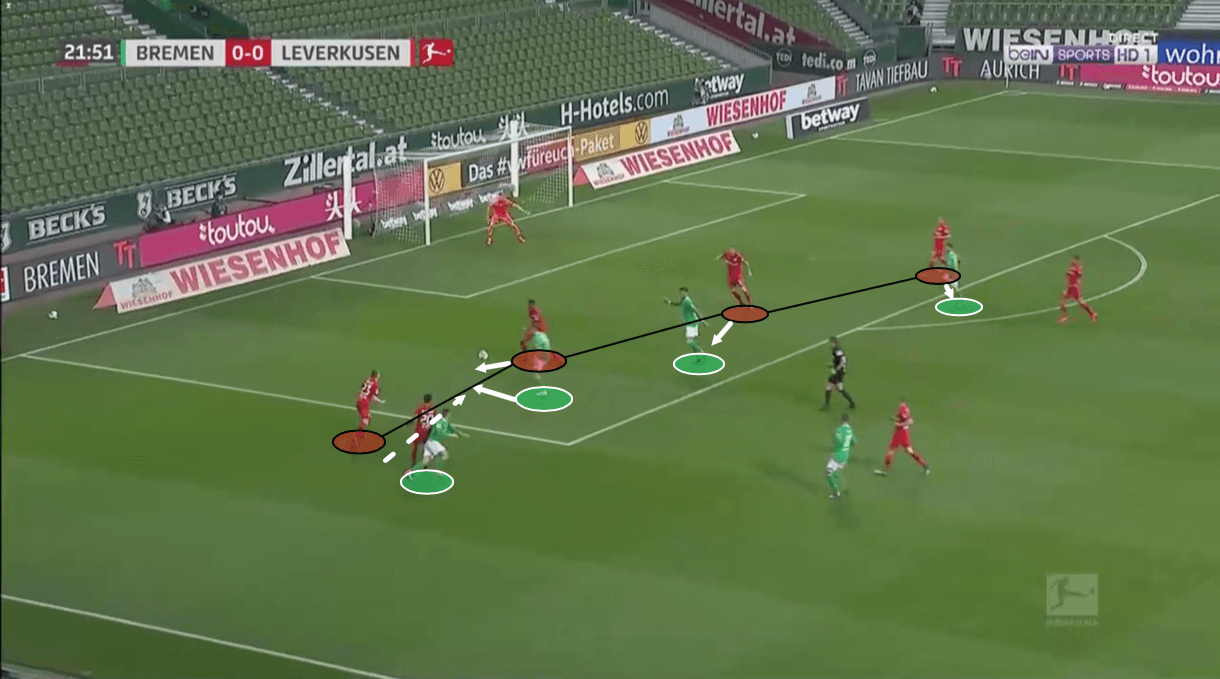 Tapsoba was arguably one of the best three players on the pitch. He led nearly every player in recoveries (17, tied with Weiser), and was consistent in quick defence-to-attack transitions. 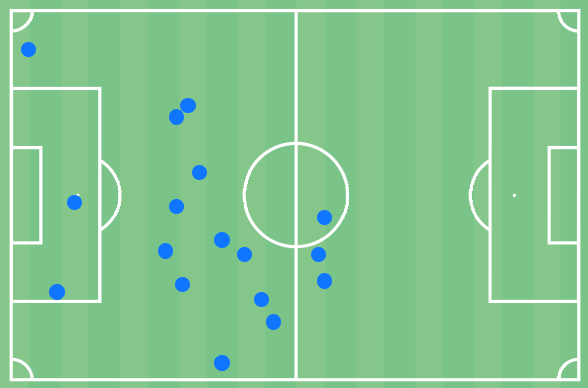 Bremen’s struggle in all areas

While Leverkusen excelled in nearly every facet of the match, Bremen struggled in numerous areas. In defence, their miscommunication in the press and lack of organisation in a deeper block both caused problems for the hosts. In this example, substitute Karim Bellarabi effortlessly dribbled inside towards the top of the box. The centre-back Veljković and deep midfielder Vogt both over-anticipated his dribble, and left a passing lane open centrally to Demirbay, who was left unmarked. This resulted in Leverkusen’s fourth goal of the match. 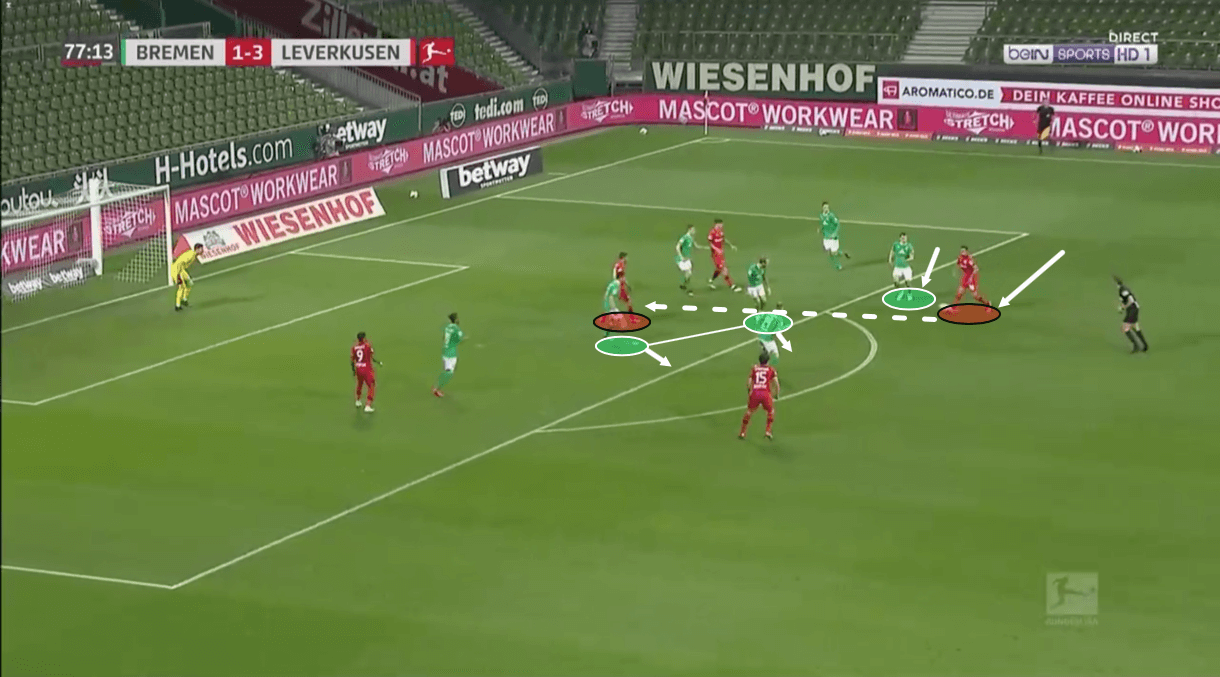 Bremen also continue to struggle defensively on set pieces. On Leverkusen’s second goal, Demirbay connected with Havertz on a free kick into the box. Rather inexplicably and possibly due to miscommunication, Gebre Selassie drops down towards the right side of the box, while Selke simply stops his marking run. Havertz accurately heads the ball in abundant space. 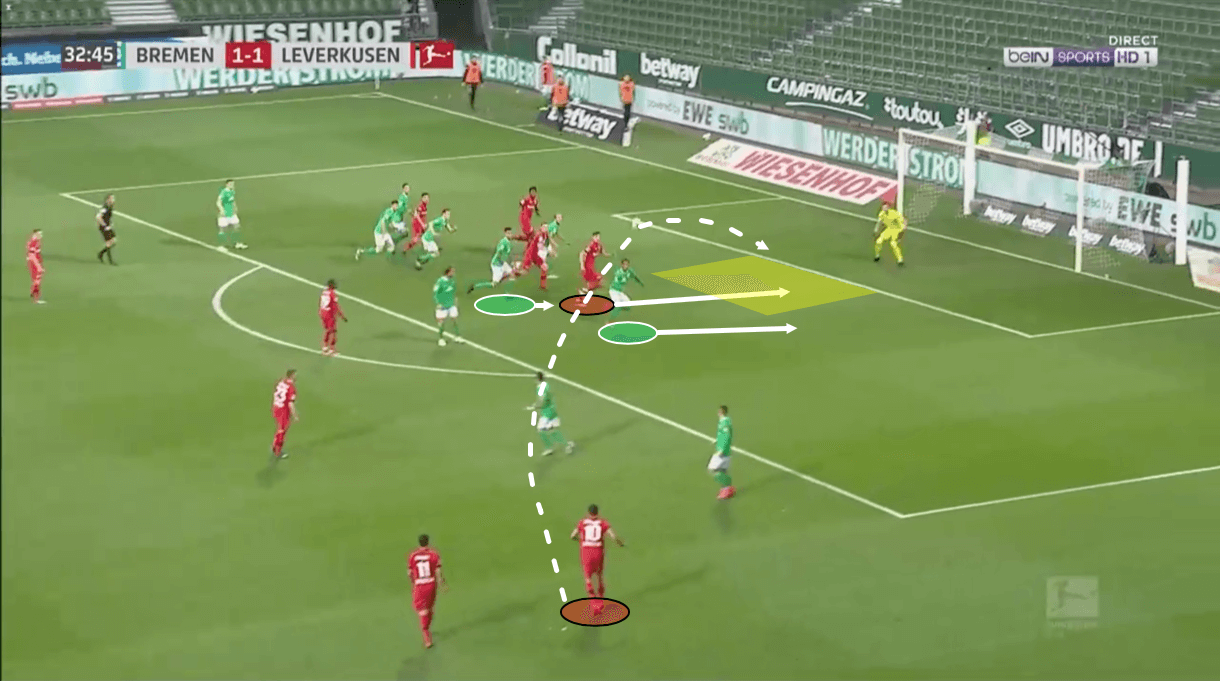 Bremen have conceded more goals on set pieces(15) than any other team in the league, and this struggle continues to show itself. Set pieces can be immensely prosperous if utilised correctly, and getting the ball into high-quality areas is vital in these circumstances. Leverkusen’s shot map is a testament to the poor positioning in defence by Bremen. All of the visitors’ four goals were in high-quality areas, and only one had an xG value lower than 0.25. 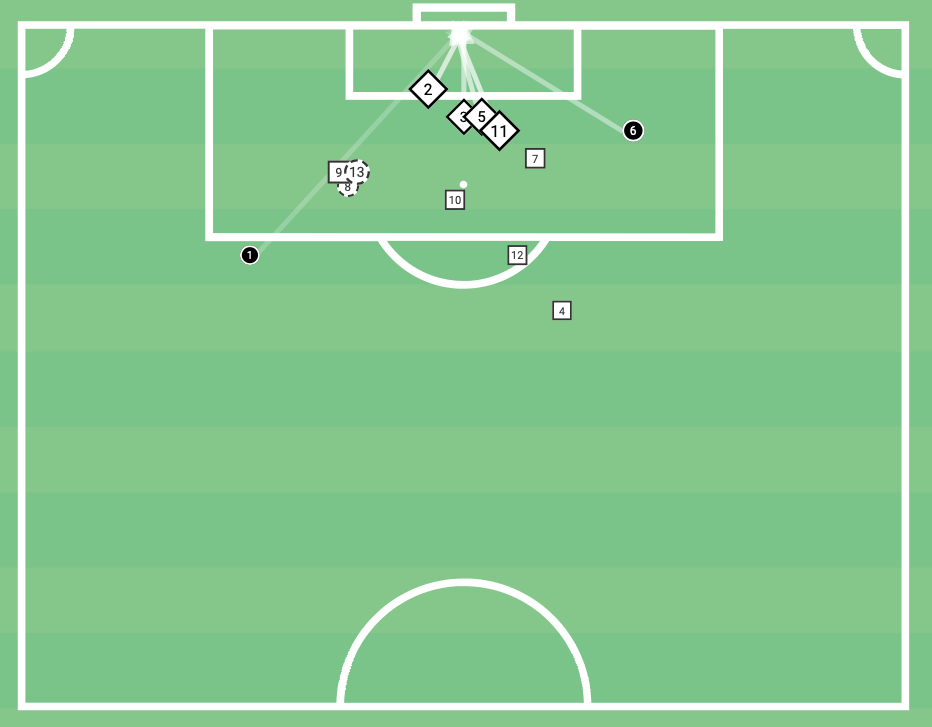 In attack, Rashica has often played a major part in bailing Bremen out of potential disaster, but the 23-year-old Kosovan struggled to do so this match. He, Selke, and Bittencourt were unable to both string together final third combinations and finish efficiently. In this image below, Bremen go on a quick counter-attack, but instead of finding a passing option to further progress the attack, Rashica, who has cut inside possibly to avoid Tapsoba, attempts a brash shot from distance that goes wide. 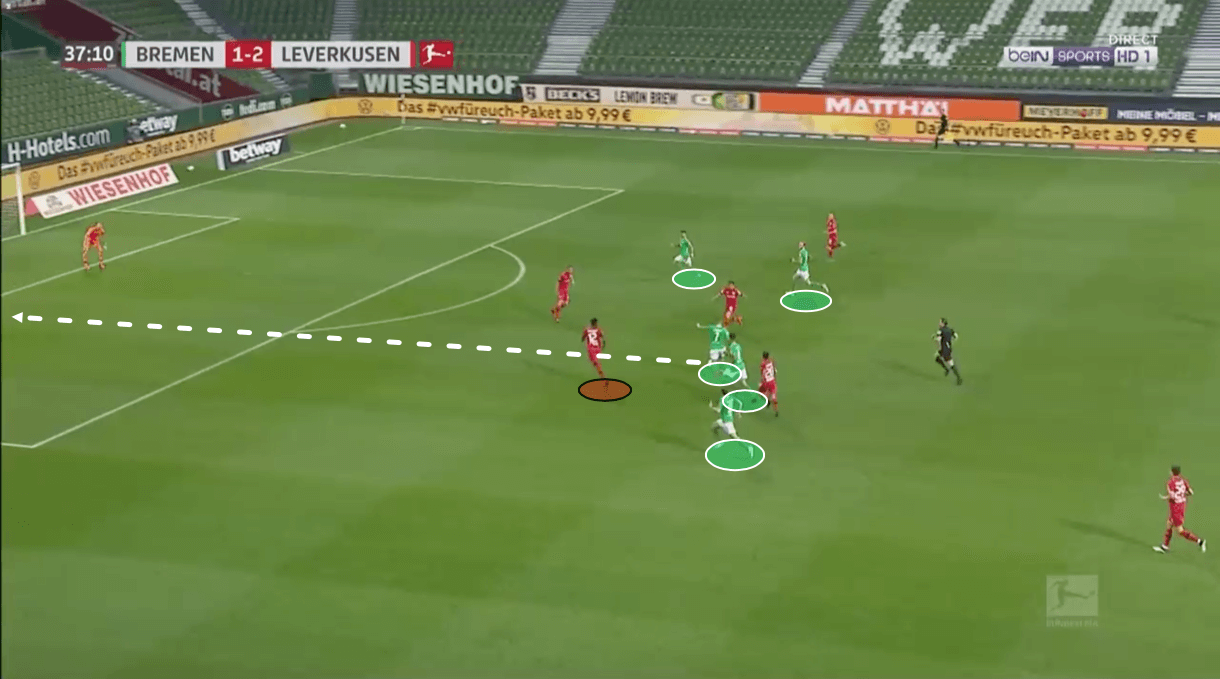 The xG ratio of 1.04 to 1.85 was arguably unjustified upon analysis, lacking the dominance Leverkusen instilled throughout the match.

Ultimately, the match played out as anticipated. Werder Bremen lacked urgency in defence and were wasteful in attack. Bayer Leverkusen’s tactics exploited Bremen’s defensive play, and their counterpress was considerably effective. The few moments when Bremen were able to bypass it Tapsoba would disrupt the hosts’ attack and transition into possession. Bremen continue to have a nightmare of a Bundesliga season, sitting five points away from potential safety. Leverkusen meanwhile have won an imposing 10 of their last 11 matches in all competitions, including a victory against Borussia Dortmund, and play five of the top eight sides in the next five, including Bayern Munich, giving Bosz and his side substantial opportunity to advance on the table.