There’s no argument to the fact that Real Madrid and Barcelona have been dominating La Liga in the 21st century. The teams have shared the La Liga title 16 times between them since 2000. But a very famous unanswered question is “ Who is better? Real Madrid or Barcelona?”. This question is never answerable as both the teams are equally strong and have got unique talents to their side. So, we would do a pure data analysis to figure out which team is better.

We would be taking into account the statistics such as the results of games and trophies won and not how they performed in a match. But we will take into account the number of goals scored and conceded by both the teams. In the below visualisation using data, the triangle with greater value will be on top and the one lesser will be in the bottom. If they overlap completely it means they have the same values whereas partial overlapping indicates the difference.

Since 2000 Real Madrid has played 21 matches less than Barcelona in all competitions and has a win percentage of 64.50% while Barca is lesser by 0.34%. But when it comes to losing percentage its Real Madrid who has a greater value. Barca has managed to have more number draws than Real Madrid in all their competitions. 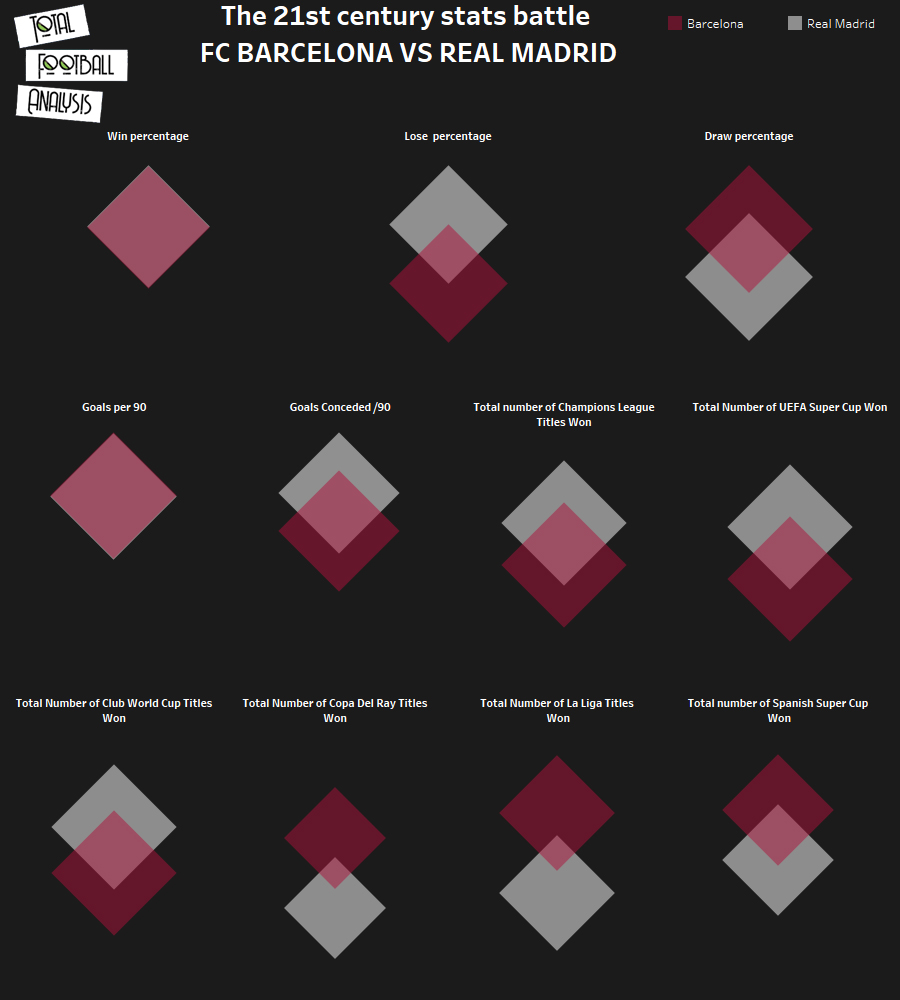 Both the teams are equally threatening with a goal per 90 value of 2.60. But the data says Real Madrid have conceded more number of goal than Barca with a goal conceded per 90 value of 1.08 which is 0.17 lesser than Barcelona.  Taking into account the number of titles, which is the most important factor. Barcelona has won more titles in competitions within Spain which can be seen from the above visualisation. But when it comes to competitions away from the country Real Madrid has more titles under their name.

The UEFA Champions League is where the Los Blancos have won on five occasions whereas Barcelona has won it on four occasions. The difference between the number of titles in other competitions such as the UEFA Super Cup and the Club World Cup between these two sides is only one making no much of a difference. But Barca has won the Copa Del Ray and the La Liga title four times more and the Spanish Cup twice more than their rivals.

As we said before, the question of who is better is almost answerable. Both teams have had a fair share of the spoils and have ended up matching each other nearly step for step. Hence concluding who is better is impossible, but we can come to a conclusion by accepting that both Barcelona and Real Madrid are one of the best teams in Europe.