With the Premier League finishing, we decided to take a look at how teams attack when they’re at home and on the road. The 19/20 season will be remembered not just because Liverpool won their first PL title but also because for the first time there seemed a genuine threat to the traditional big teams in the race for the Champions League spots.

To understand the performance of the various teams, we decided to take a dive into their attacking underlying numbers for the season that has just gone by. Naturally, to prevent any skewness from penalties, the nonpenalty expected goals metric has been taken. 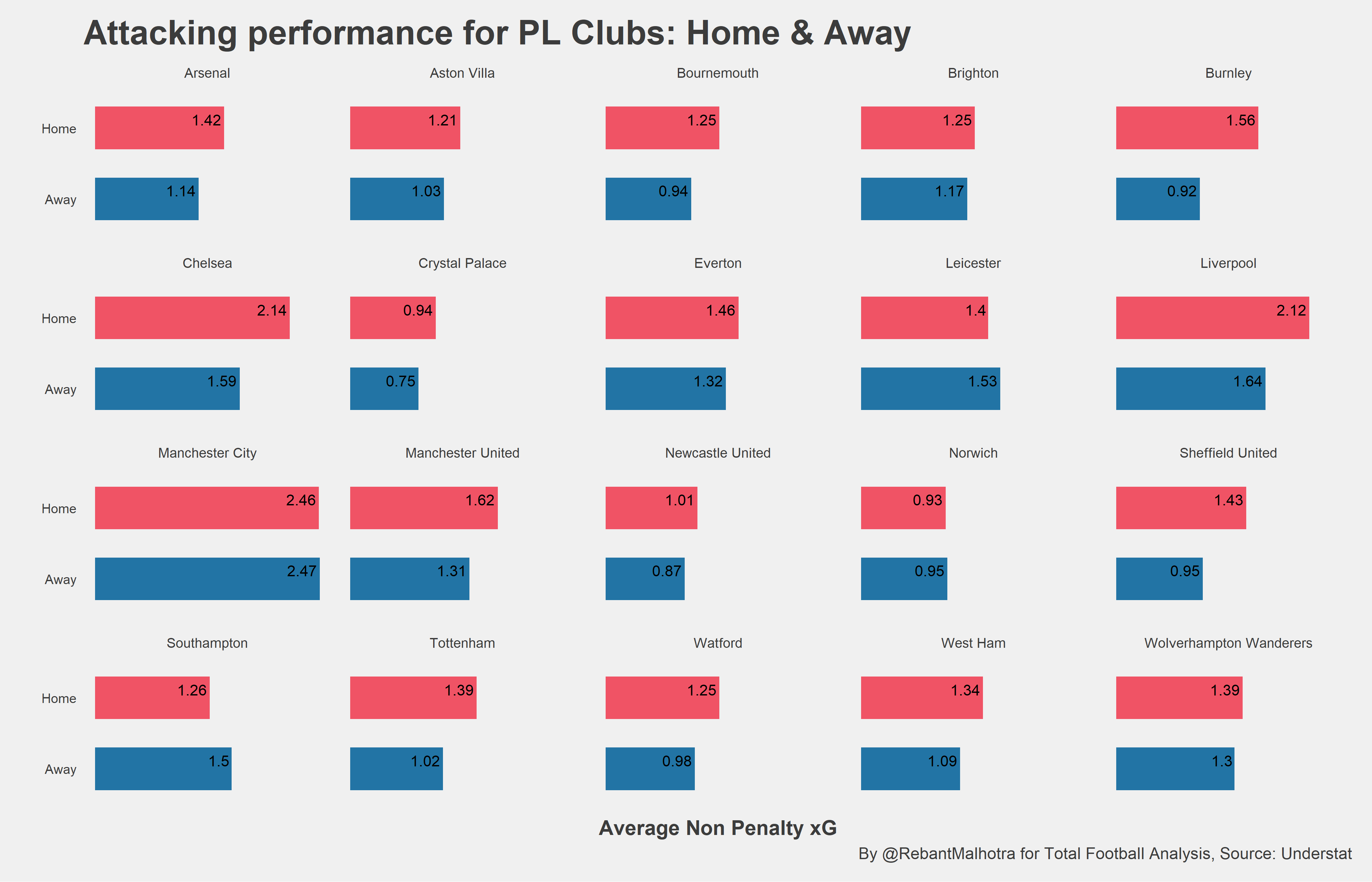 While Liverpool and Manchester City were both touted once again for a close finish at the top, the Reds ran away with the league with great defensive performances and wins where they came back from behind to get all 3 points.

No one can deny the attacking prowess of Manchester City and the stats back that up. They post the highest numbers both at home and away. The team scored 3 or more goals in 19 games in the leagues, a staggering number to say the least.

Liverpool on the other hand were slightly more conservative in their away games but showed similar gusto while they were at Anfield.

Manchester United may have had a disappointing first half but bounced back after the signing of Bruno Fernandes. The Portuguese acted as a catalyst for the club in their race for the top 4. Post-January, the team has scored an average of 2.14 goals/game, a number that will surely instill confidence in supporters after a remarkable end to their season.

While the Blues may have had a disappointing end to their overall season after losing the FA Cup to arch-rivals Arsenal, they did achieve their primary objective of getting Top 4 all without any signings and their frontline being led initially by Tammy Abraham and consequently by Olivier Giroud who was essential to their campaign but has never been a prolific goal scorer.

The promoted clubs for the 19/20 season turned out to be an extremely mixed bunch. While Norwich City started out strong with several plaudits coming their way for their attacking, the Canaries quickly faltered and became an uninspiring bunch with nothing coming their way. They posted the weakest numbers in the league when it came to home performances.

Sheffield United and Chris Wilder turned out to be the dark horses. With their resolute defense early through the season, they turned out to be the most promising of the 3 promoted teams. Numbers show that the Blades struggled while on the road with an extremely low NPxG in the league only ahead of Newcastle and Crystal Palace.

Aston Villa’s topsy turvy journey made for a nail biting finish to the end of the season as the pandemic came to their rescue. Villa’s post restart numbers may have been not upto the mark offensively but the team solidified at the back with a crucial win against Arsenal in GW 37.

While Arsenal may have finished the season strongly with an FA Cup win, the obvious issues offensively continue to be visible. The Gunners have little creativity and often struggle to break down teams that decide to sit back and defend deep. Improvements especially playing out from the back is quite visible in the team but a huge issue is the lack of goals from midfield that they’ll certainly be looking to fix this window.

Elsewhere, their North London rivals Tottenham Hotspur have been able to grind out wins but most have not been due to their offensive strengths. Spurs much like Arsenal have won against teams where they have played on the backfoot but struggle to break down low block teams. Offensive numbers have fallen off the cliff since Mourinho’s appointment however results continue to trickle in with Son & Kane often bailing out the team.

Southampton’s rocky start under Hasenhuttl soon stabilized as Saints went on a roll with Danny Ings displaying his best ever form. An interesting aspect here is that they are the only team that performed significantly better offensively away than at home.