A Principal Component Analysis (PCA) allows you to mathematically determine styles based on statistics. It will take in statistics and tell you the different groups of players that most correspond to the data you have fed it. 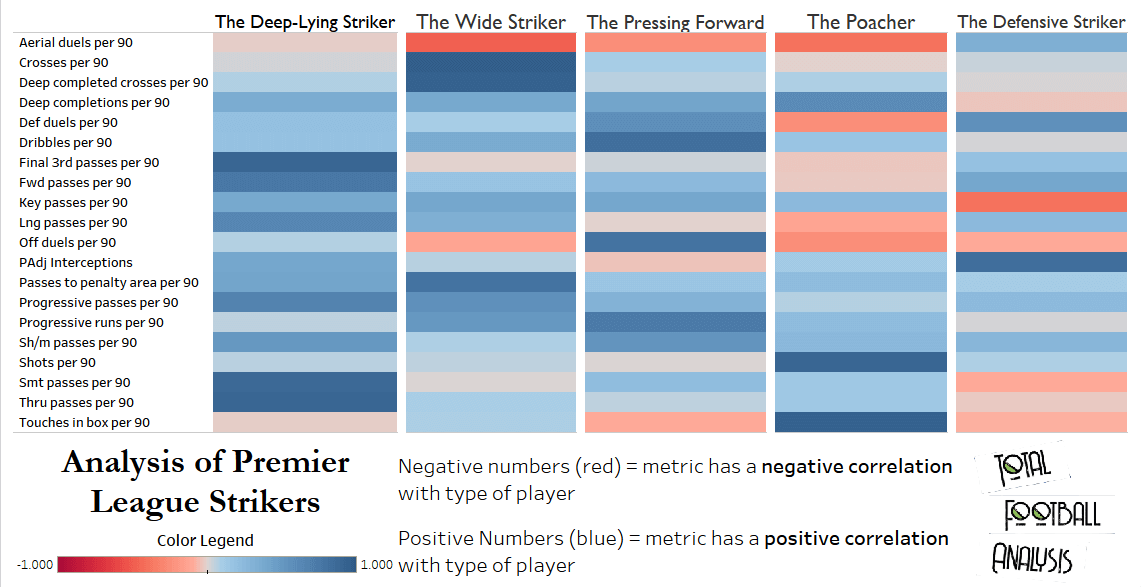 Looking through each category, we can see which group of statistics most correspond with that type of striker. For example, the poacher, highlighted in blue, utilises metrics such as touches in the box per 90, shots per 90 and short/medium passes per 90. This makes sense as poachers tend to hang around the box – which explains the high correlation to touches in the box – and because of that, they get to shoot more – explaining the high correlation to shots per 90. One forward that lines up in this category is Chelsea’s Tammy Abraham.

Roberto Firmino’s role at Liverpool has been well-documented and analyzed. Normally, Firmino likes to drop deep and participate in the attacking build-up play, making him a deep-lying forward. Looking at that section, we see the strongest correlations in through passes, smart passes, final third passes and forward passes. Analysing Firmino, we see that he ranks first in all of these metrics. Other Premier League forwards similar to Firmino include Alexander Lacazette, Lucas Moura, Richarlison and Danny Ings. While these forwards are not exactly like Firmino, through the analysis of metrics, these forwards rank highly in the metrics PCA told us to look closely at.

Regardless of Mauricio Pochettino and José Mourinho, Tottenham’s forwards are known for their great pressing and, therefore, there should be no surprise that Heung-Min Son fits best the profile of pressing forward. Other forwards that fit the mould of Son are Pierre-Emerick Aubameyang, Gerard Deulofeu, Gabriel Jesus and David McGoldrick. Similarly to the previous example, these forwards rank highly in the metrics indicated by the PCA.

While these players might match the style, the PCA does not tell us proficiency of the players in those metrics. That is something that has to be undertaken with other metrics and video analysis. For example, Ings is obviously not as good as Firmino in terms of dropping deep, helping in attacking build-up play and being creative in one’s passes. However, Ings does perform relatively well in those metrics and might be a choice for clubs looking to imitate Liverpool’s playing style or Firmino’s role. Additionally, forwards aren’t confined in one strict category – they might up correlate to other categories albeit rather weakly. As such, PCA, as data analysis, provides us with a good structural framework in scouting and recruitment.