David Silva’s illustrious Premier League career came to end after he decided to leave Manchester City at the end of 2019/20 season. The Spanish midfielder has won four Premier League titles, joint highest with Sergio Aguero and Vincent Kompany. The Spaniard appeared 436 times in all competitions for Manchester City, playing a pivotal role in the teams’ extraordinary success over the last decade. Silva has 93 Premier League assists to his name, only five other players have more. He has assisted for 10 or more goals in four out of his 10 seasons at Manchester City. Most recently, in the 2019/20 season he assisted 10 goals, which was the fourth highest in the league. The visualisation below shows the goals assisted by David Silva for Gabriel Jesus. 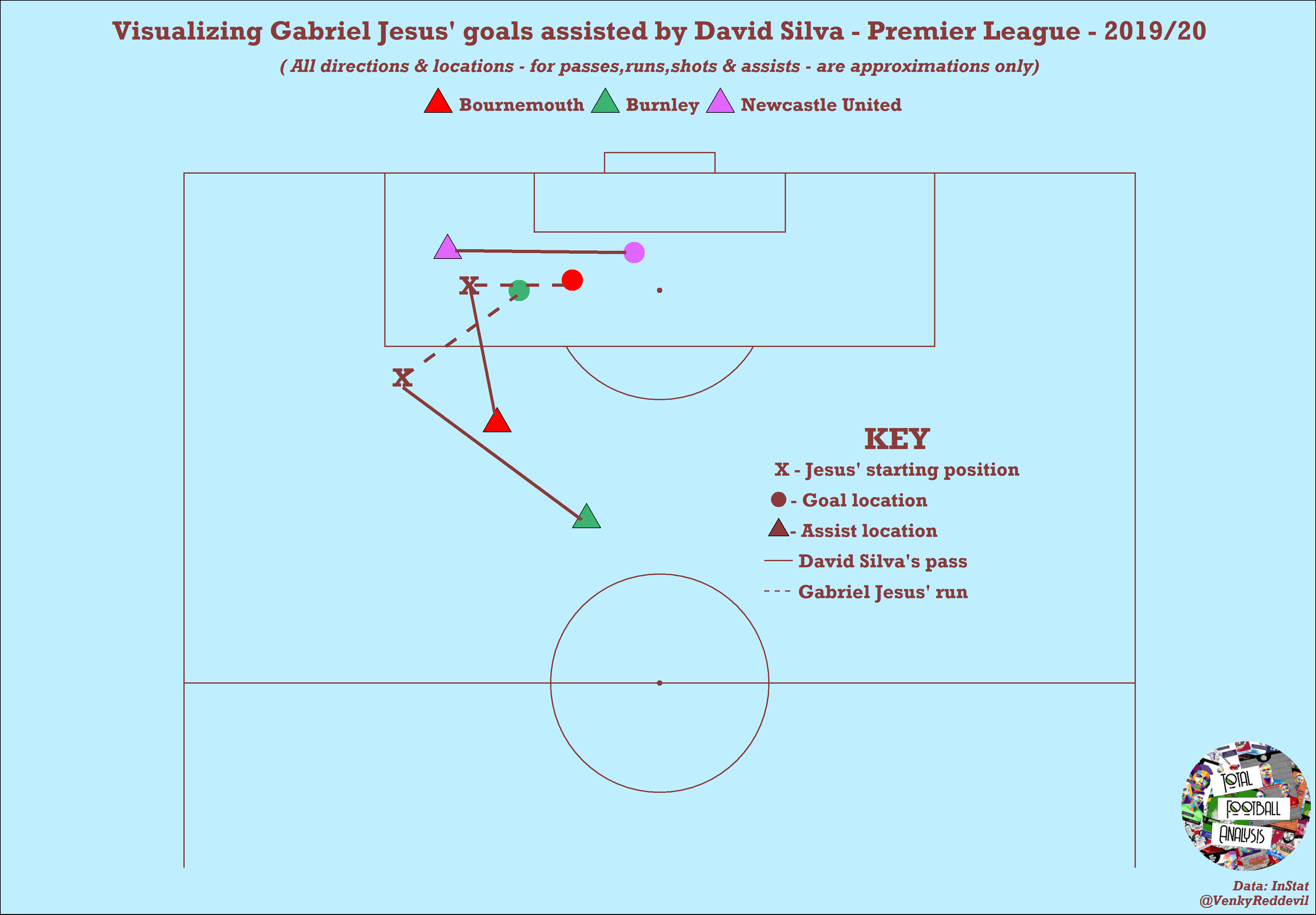 Goal one vs Burnley – 23’
Having to make up for lost ground in the title race, after dropping points against Liverpool and against Newcastle United in November, City entered the month of december looking to gain some momentum going into an important period of fixtures. Their first test was an away fixture against Burnley. City had no problems with this one as they comfortably won the fixture 4-1 with goals from Jesus (2), Rodri and Mahrez. One of Jesus’ goals was assisted by David Silva. Silva, after collecting the pass from Sterling, simply nudged it on to Gabriel Jesus on the left side, who then curled it into the far post with his right foot to score City’s first goal of the game.

By the time Manchester City faced Newcastle United at the City of Manchester stadium, the title race was already over and Liverpool were confirmed as champions. But that did not make any difference for City, as they went about their business as they always do. City scored five past Newcastle in this fixture with four different scorers and an own goal from Federico Fernandez secured three points for the home side. Gabriel Jesus opened the scoring after David Silva put in a low cross from just inside the box on the left side.

In what was City’s penultimate home league game of the season, City faced Bournemouth, for whom this was a must win game if they were to have any chance of staying in the Premier League. But, in the end, as expected City came out victorious, thanks to goals from Jesus and the man in focus David Silva. Towards the end of first half, City made a quick passing move that saw David Silva collect the pass from Gundogan and make another quick through pass to Jesus who went on to finish it brilliantly.