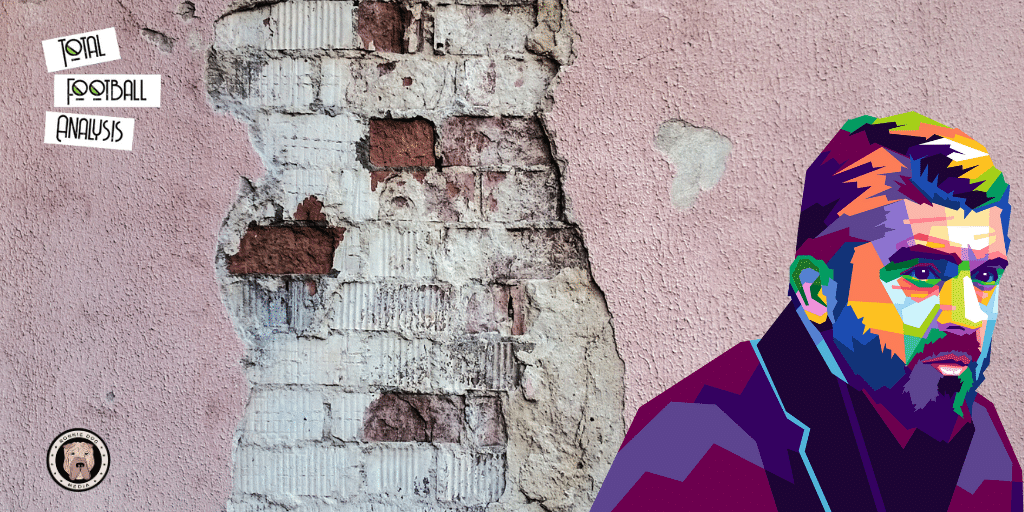 Since Carlo Ancelotti sacked by Napoli, former AC Milan manager Gennaro Gattuso became their manager, their results had been dropping. In Serie A, they only had one victory in five games before the Juventus game. In another competition, the Coppa Italia, they managed to beat Perugia and Lazio, progressed to the semi-finals.

Gattuso’s had been using a 4-3-3 formation; in this tactical analysis, we will show you the midfield tactics of Napoli. It is an analysis that focuses on the midfield trio of Napoli and the philosophy of Gattuso.

To begin with, we introduce the options of Gattuso. In his first game against Parma, he played Allan as a sole pivot. Afterwards, it was Fabián Ruiz to play in that position, until they signed Demme from RB Leipzig. Piotr Zieliński was used as an attacking midfielder, while the 20-year-old Eljif Elmas, was a fringe player who only started one game.

Napoli was a possession-based team. Their average possession per game was 56.15% since Gattuso’s appointment. Also, they insisted to play out from the back on many occasions. In this phase, the centre-backs split to stretch the oppositions, leaving the passing lane to the sole pivot opened.

It was illustrated in the below image. Konstantinos Manolas and Giovanni Di Lorenzo split wide. Meanwhile, as a sole pivot, Ruiz dropped deep to provide himself as an option, also took Patrick Cutrone with him. Napoli enjoyed a three v two numerical advantage in this phase, and this allowed Manolas to receive the ball and break the press without pressure. 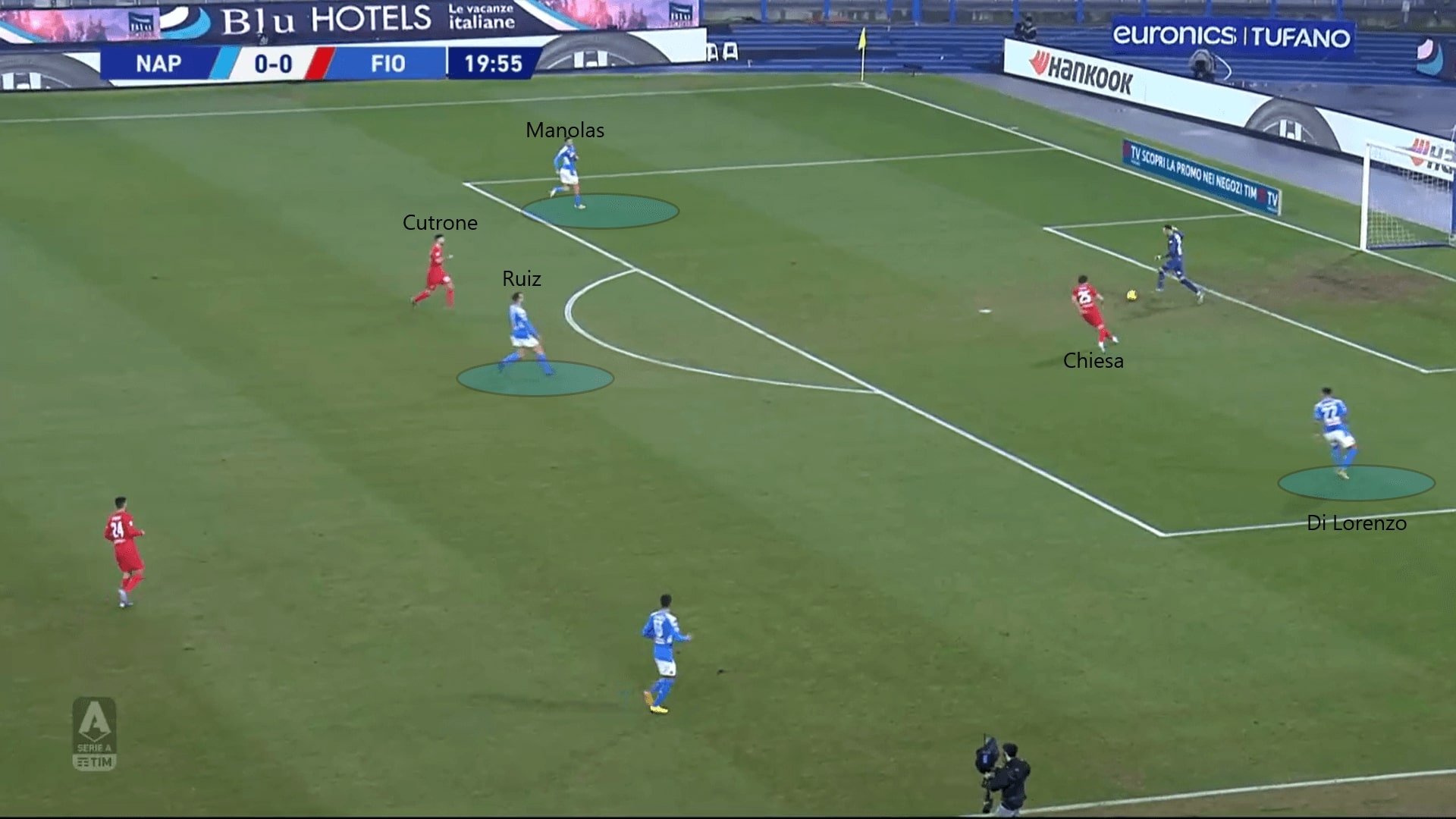 Since the sole pivot usually positioned himself centrally, the opponents noticed and marked him. Therefore, Napoli’s attacking midfielders also dropped deep to add an extra man if that happened. With that dropping movement, Napoli had a free player to progress the ball and eliminate the press.

In this example, Demme, the sole pivot, was covered by Paulo Dybala. However, Napoli had another option for Alex Meret. Ruiz dropped from the ‘No.10’ position, in between the lines to receive the ball. 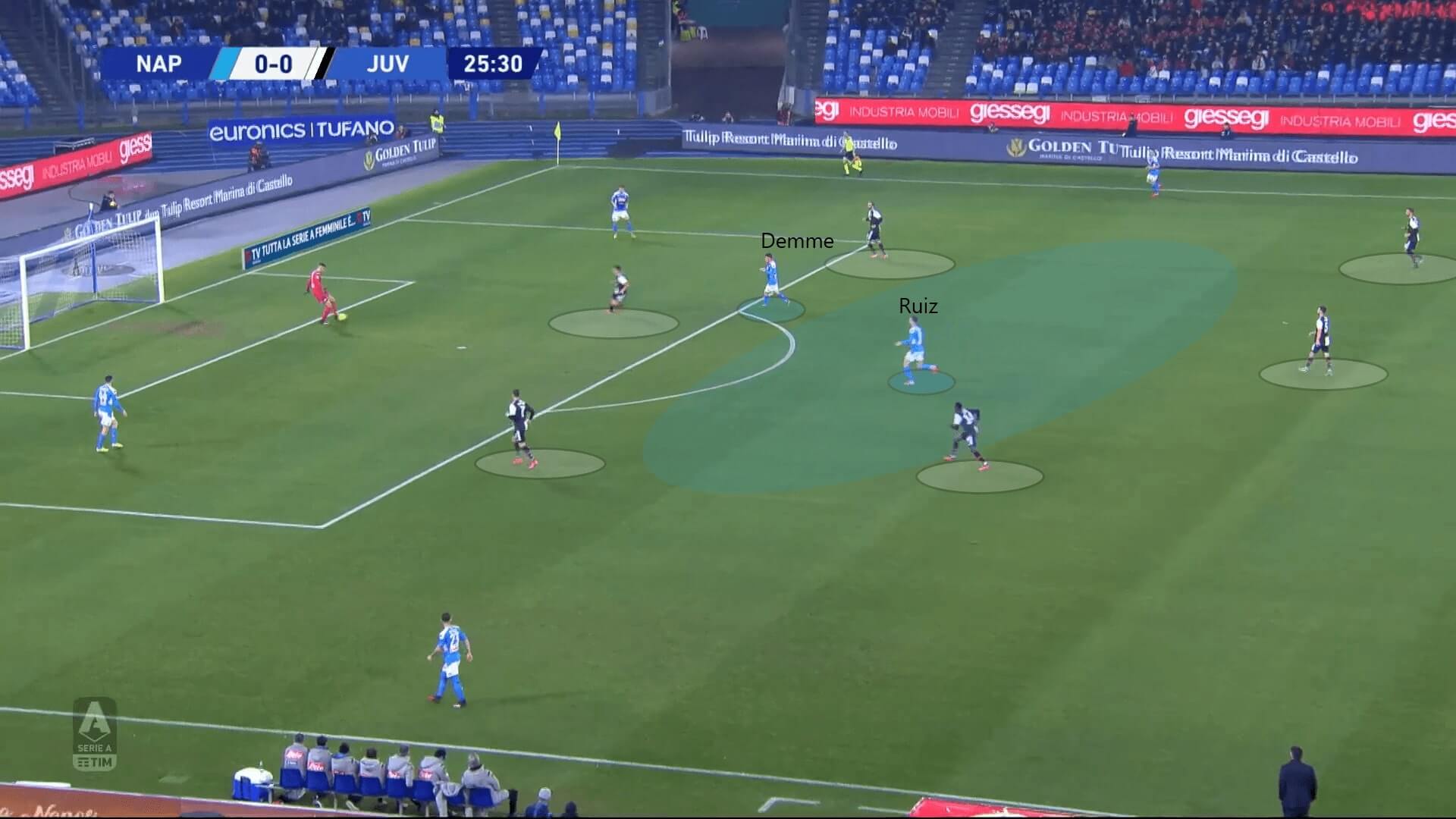 The passing ability of Ruiz was vital to the team, the Spaniard was technically-gifted, read the game well and able to pick a difficult option, even under pressure. Ruiz could pass vertically to penetrate between players, allowing Napoli to progress the ball at the centre, into an advanced position.

Also, with Ruiz’s presence, the attacking midfielders could stay high up on the pitch, as having Ruiz is enough in the build-up phases.

As, in the following image, Ruiz was under pressure of Ciro Immobile, but he was calm to identify and pick the target: Zieliński. This was a good pass as it went through four Lazio players, Napoli were enjoying more spaces high up on the pitch. 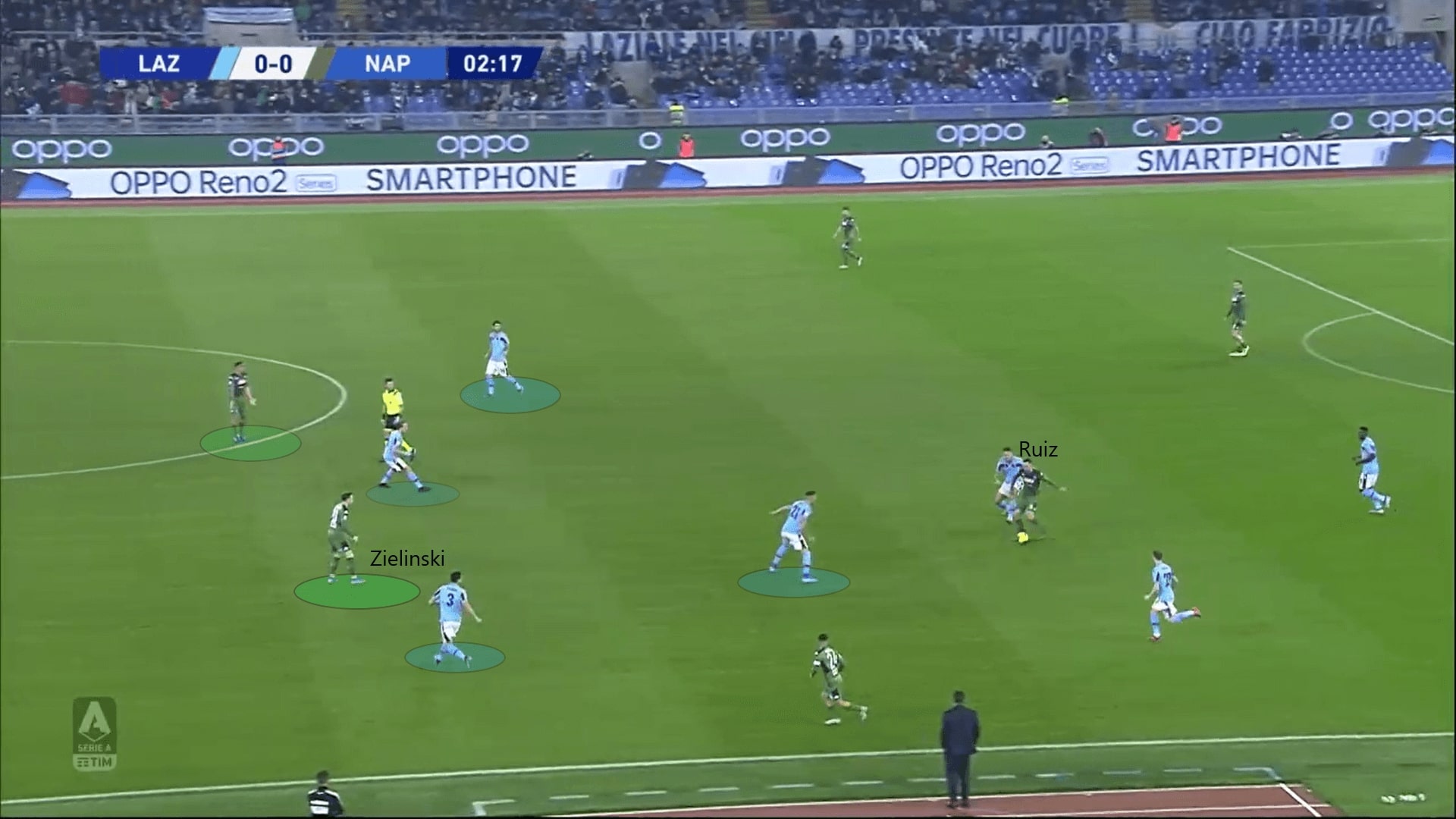 An issue in this phase was their consistency against intensive high pressing. When their opponents committed huge numbers forward, even marking the dropping players of Napoli, they had no choice but to go long.

In this situation, Inter pressed high on the ball side. Ruiz, the sole pivot, was marked by Marcelo Brozović; Zieliński was also marked by Matías Vecino; Lorenzo Insigne and Allan were also being covered. When all midfielders were unavailable, Napoli could not play out from the back. Mário Rui played long and Napoli loss the ball. 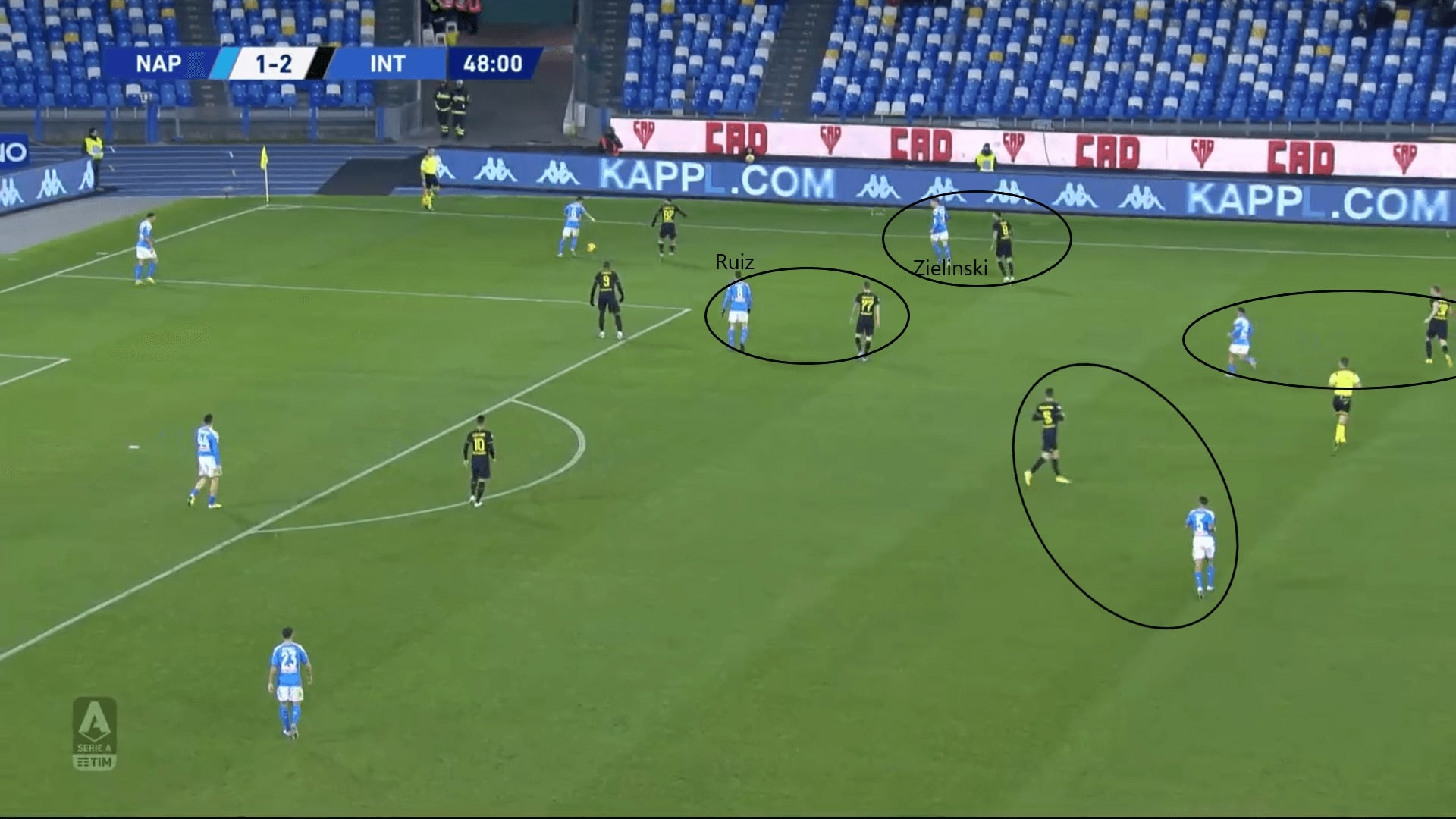 When Napoli’s attack progressed to another phase, they faced another issue between the midfielders. Their two ‘No. 10’s, who were usually Allan and Zieliński, lacked interactions. Below is a passing graph that summarized the passing combinations between the three midfielders of Napoli, in the loss against Lazio. It reflected Ruiz had the ability to find both attacking midfielders, they exchanged 17 and 16 passes respectively. However, Allan and Zieliński only exchanged seven passes.

Another notable point were the positionings of the midfielders. Zieliński stayed close to Insigne, leaving a huge horizontal distance with Allan. Their long-distance could be another reason for the lacked interactions between the two attacking midfielders.

The ‘10’s, especially the left attacking midfielder, Zieliński, had to cooperate and serve Napoli’s key player, Insigne well. When Insigne drifted inside to occupy the half-spaces, Zieliński or Rui should provide the width, hence, the Polish kept a distance with Allan. Also, since the skipper was the focal point of Napoli’s attack, on many occasions, Zieliński would pass the ball to him.

Below is a game situation in the loss against Lazio. We could observe the triangle formed by the midfield trio was slightly large. Zieliński positioned himself wider on the pitch as Insigne was occupying the half-spaces. Also, since Lucas Leiva was blocking the central passing lane, it also forced the Polish to pass to Insigne. 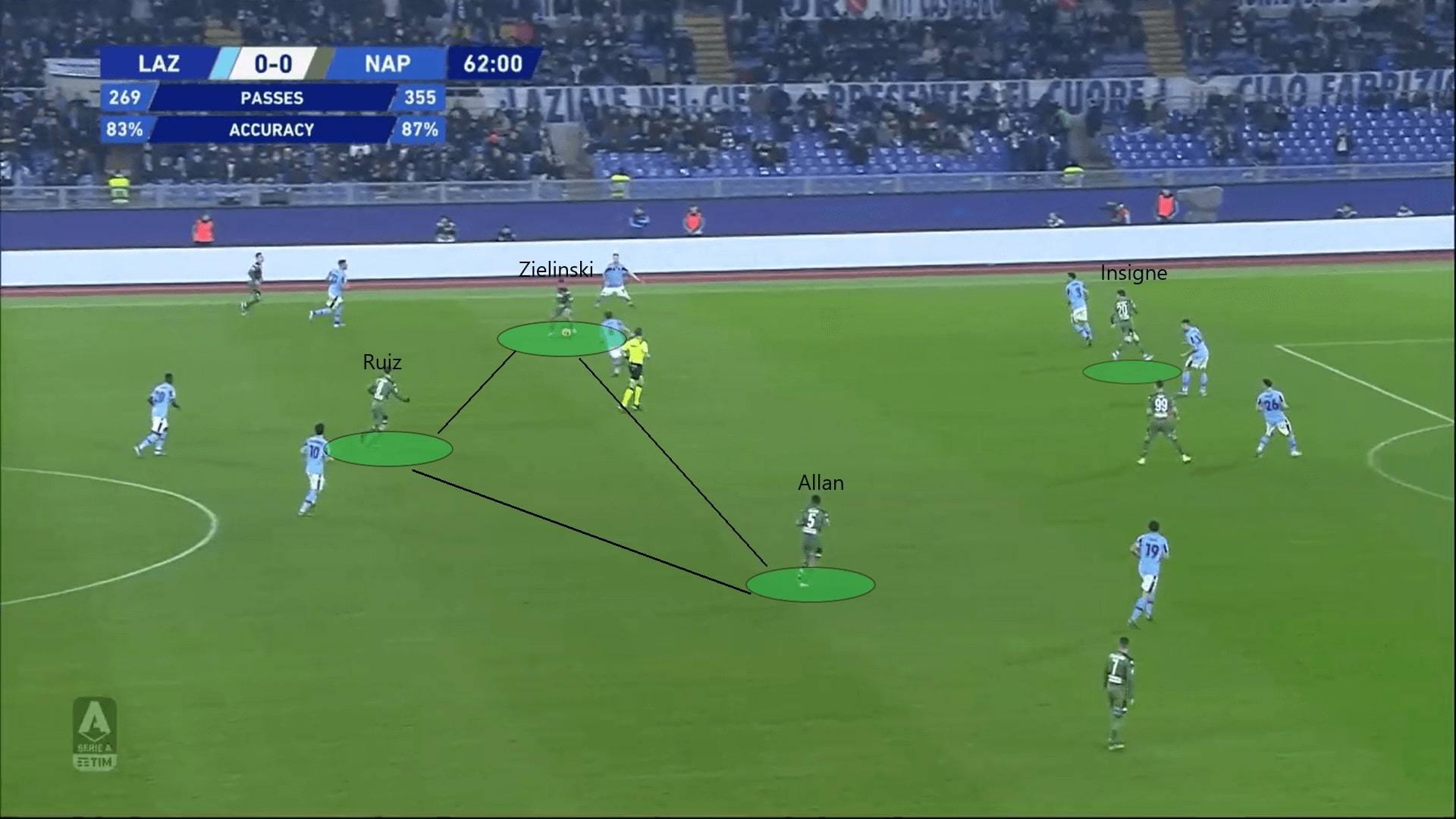 One of the biggest strengths of the midfield trio, particularly, Ruiz, was his ability to pick a good option in offensive transitions. The Spaniard could identify the players available in an instant, he also had the calm and composure when facing pressure or counter-press.

In the Inter game, he demonstrated his ability. Before receiving the ball, he checked his shoulders twice, then quickly opened his body towards the offensive side. Ruiz did not merely focus on the ball after it arrived under his feet, instead, he also noticed the movement of Insigne and the gap between two Inter players. 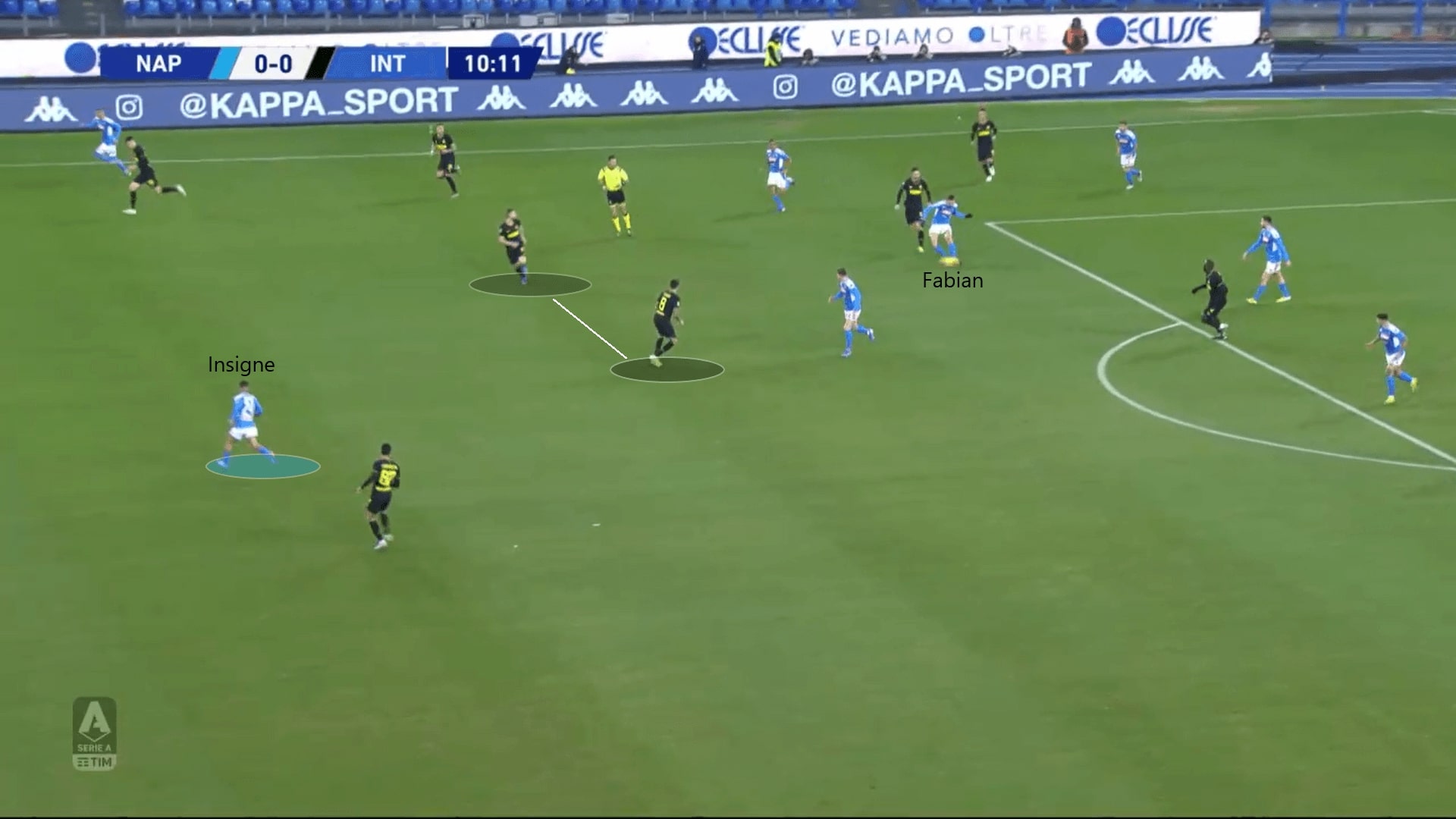 Another key attribute of Ruiz was his ability to tear a high defensive line, though, in the past matches, teams sit in a midblock or low block more often. Ruiz accumulated the greatest number of passes in Serie A, 1349; also, he placed a pass to the final-third in 12.58 minutes per game, ranked second in the league.

The following example was in the cup game against Perugia. In this offensive transition, Ruiz observed his options while he was carrying the ball. Even though there was a player in front of him, he still picked Zieliński, who looked to exploit the spaces behind defenders but offside. Ruiz’s passing ability to pass through the gap between players was vital to the team. 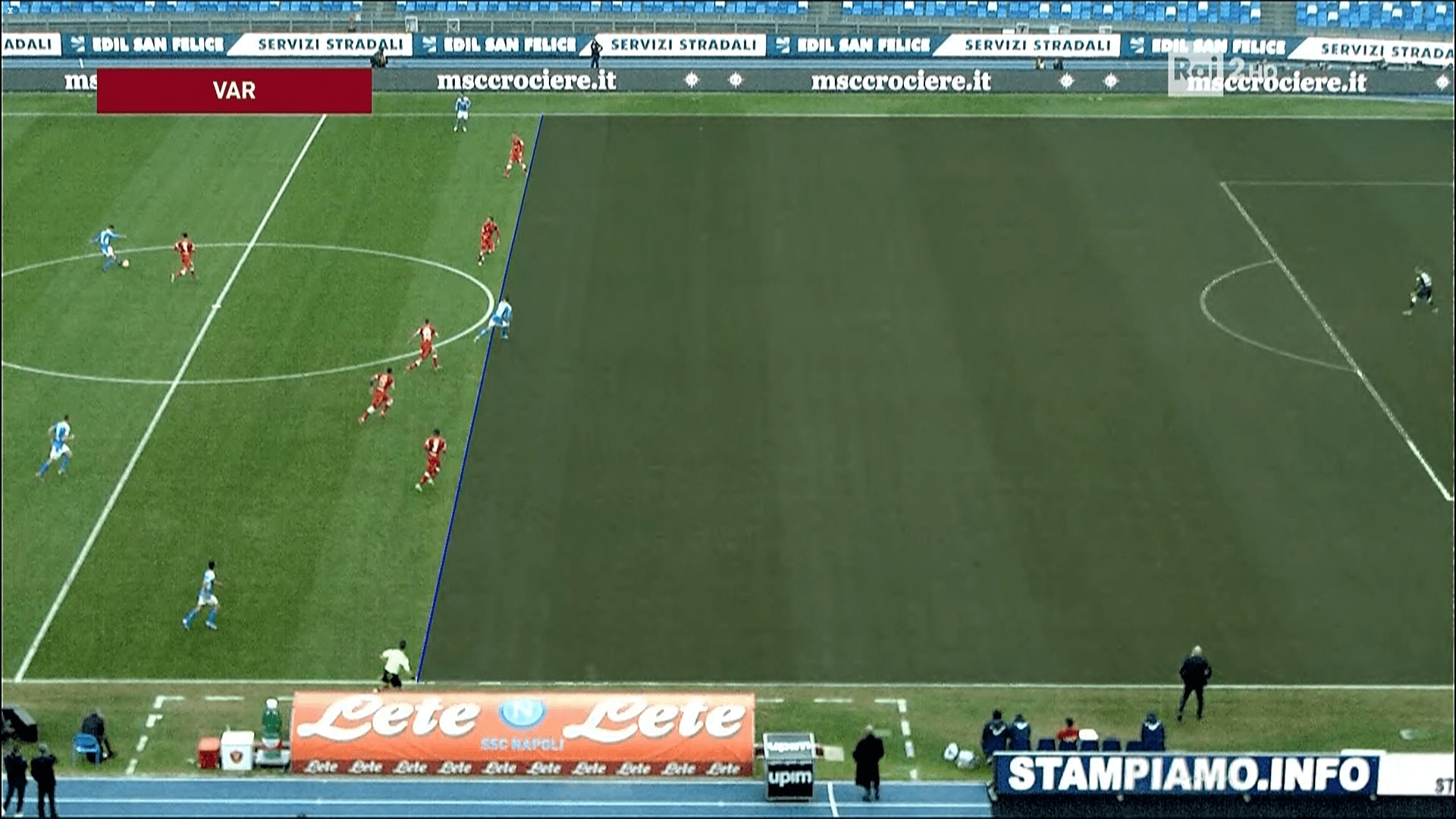 When defending, Napoli usually placed a midblock. The midfielders had their role to play. However, there were flaws in Gattuso’s approach, and only Juventus and Parma recorded an xG below one (0.73 and 0.97) against Napoli.

One of the issues was the spacing of the midblock, as we see below. Allan stepped out to form a 4-4-2 midblock with Arkadiusz Milik. However, the two other midfielders did not follow up to cover the space behind the Brazilian. Allan’s pressing was not impressive as well, since when he pressed, he failed to cover Brozović. Therefore, even the Serbian was sandwiched by two blue shirts, he was comfortable to receive the pass and progress the ball. 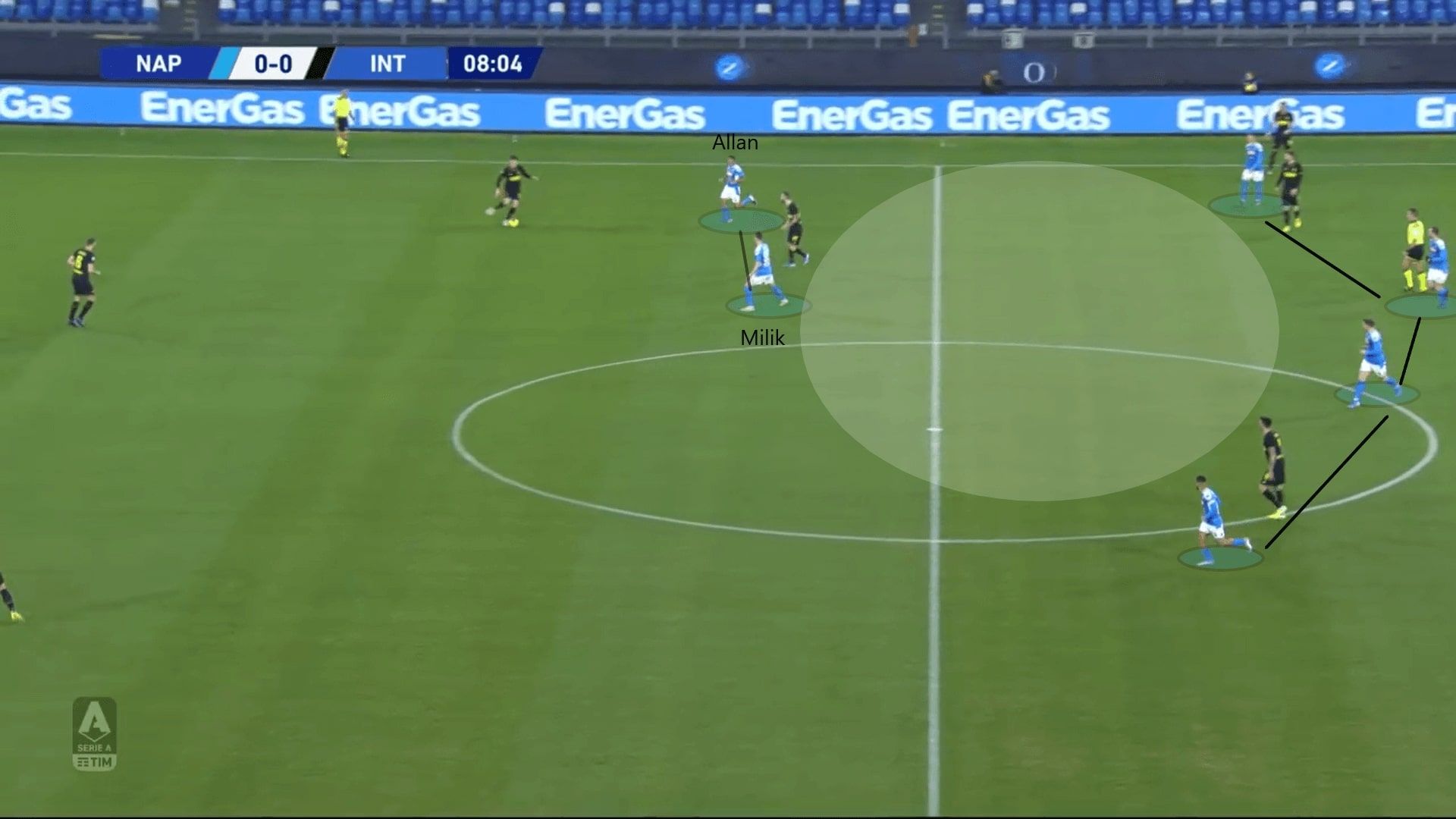 Another issue was the ability of Napoli midfielders to deal with a team which was building-up with an extra player. When they formed the midblock in a 4-1-4-1 shape, the two attacking midfielders could be overloaded. Once again, the sole pivot dropped too deep and he was unavailable to cover the spaces between his teammates.

In the Sassuolo game, Napoli encountered this problem. Their opposition played in a 4-4-1-1 formation, moving the ball forward with two pivots, and a dropping player. Therefore, at the centre, Napoli was overloaded, in a two v three situation.

Of course, they could move their wingers inward to reach numerical equality. However, it came to another dilemma, which this move would set the full-backs unmarked. The opponents could still play out from the back without pressure. 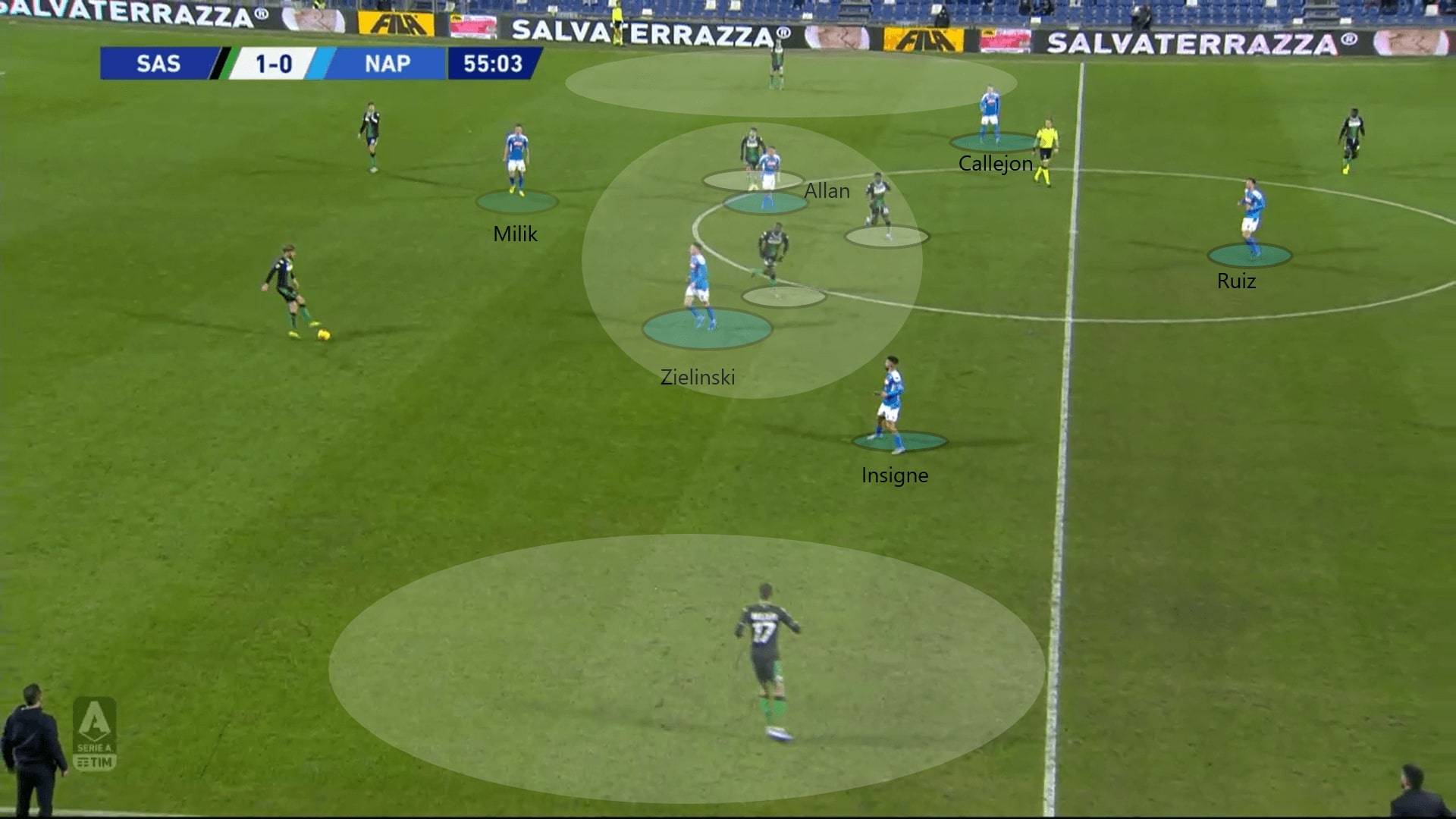 Meanwhile, the preferred midfield combination of Gattuso before the winter signings, Ruiz, Allan and Zieliński, failed to protect the defenders. It seemed all of them were players with a more attacking mindset, and relatively, with a weaker defensive awareness. Napoli struggled in defence because of this.

The first issue was the inability of the midfielders to cover the shadows. Napoli’s defensive lines were not compact horizontally at times, which allowed the oppositions to position themselves between the lines. As we can see, three Lazio players were between the lines. As a sole pivot, Ruiz, who stayed slightly deeper, he should have shut the passing lanes to deny central penetration. However, this was not his strength.

As, on this occasion, Luiz Felipe could pass to Felipe Caicedo directly, as Ruiz failed to cover the forward. 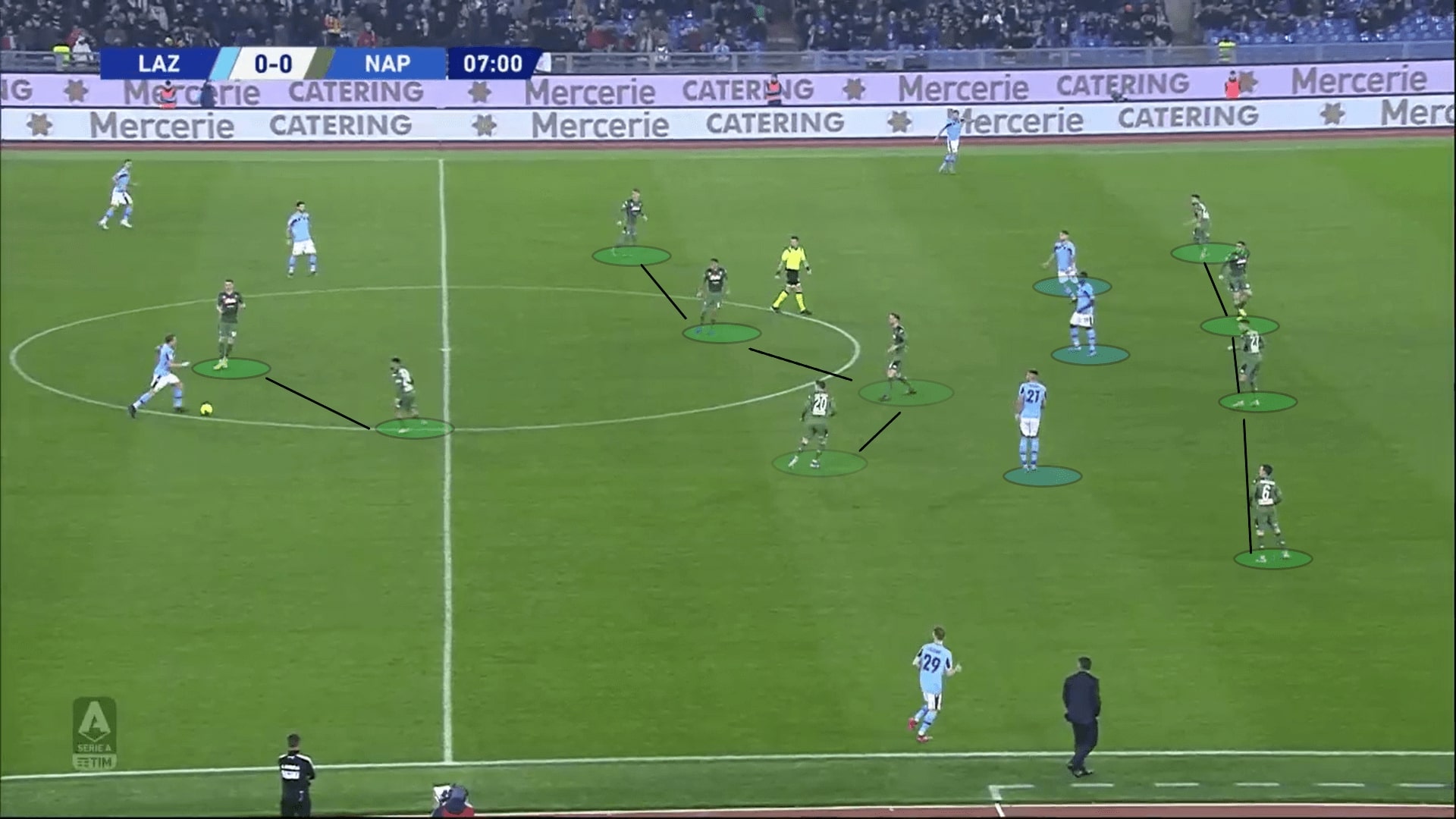 As a sole pivot, similar to the role of Rodrigo Hernández under Pep Guardiola’s Manchester City, Ruiz also played an important role in defending transitions. When Napoli pushed their players up front to attack, they left their defence exposed. A good stopper in transition would reduce the direct threat of the opponent creating chances.

Ruiz’s defensive awareness and decision makings were insufficient to deal with these situations. When defending transitions, he tended to step out to press softly, leaving huge spaces behind him. As in this example, he chose to press Brozović, but he was unaware of the forward run of Roberto Gagliardini, hence, failed to cover the Italian while pressing. 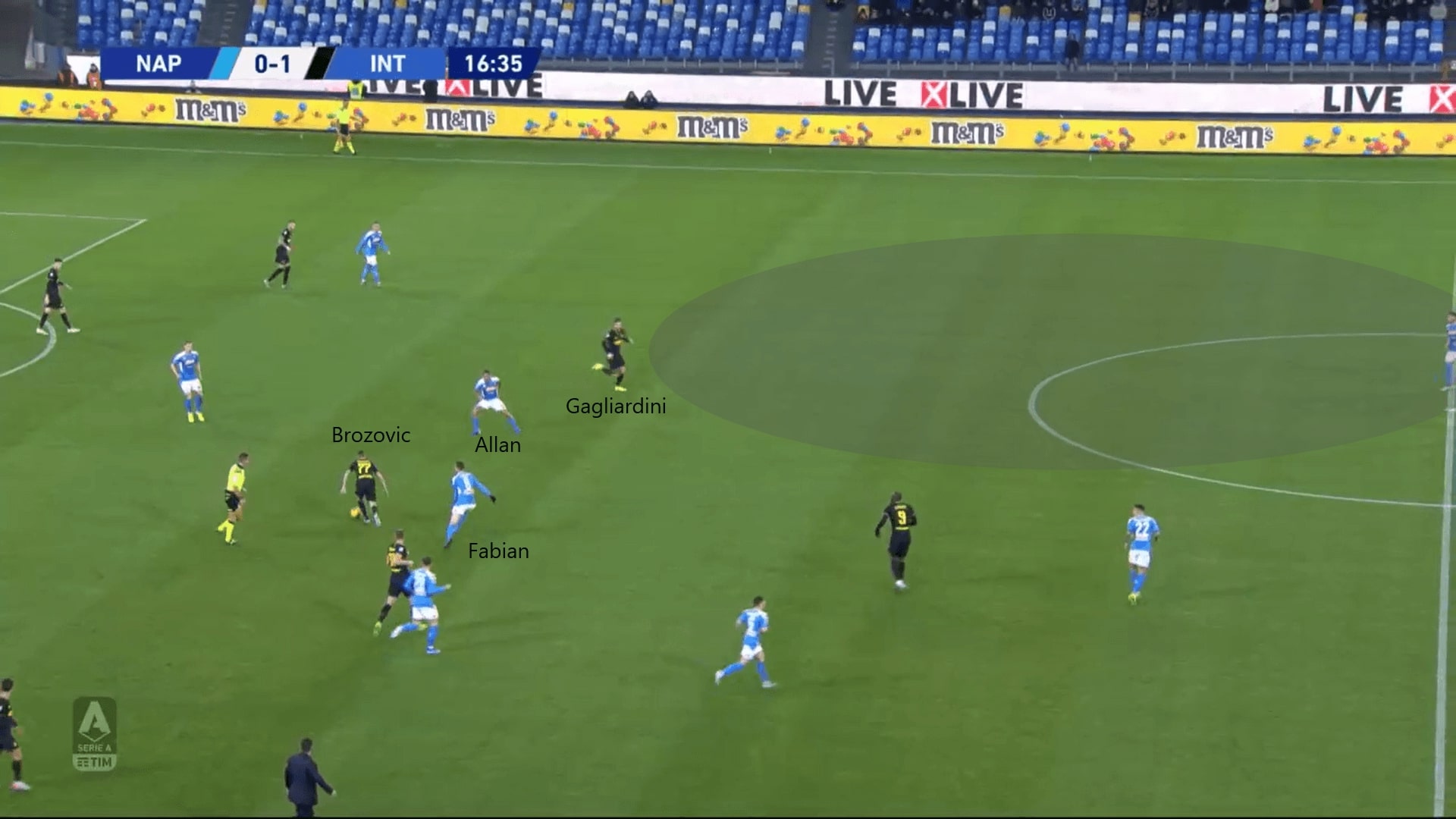 When defending deep, Napoli midfielders also failed to track runs. They let the opponents run behind them, attacking the goal. Since the defenders stepped out early to press, Napoli’s defence could lose shape. It required the efforts of midfielders to cover the space, though it was not the case in most situations.

This example was from the Lazio loss. At first, all three Napoli midfielders surrounded Immobile, while Di Lorenzo stepped forward to sandwich Caicedo. However, when Immobile was running forward to exploit spaces behind the centre-back, none of the midfielders showed intentions to track him. If not Rui’s block, Napoli already conceded a goal early.

To sum up a bit, Gattuso’s midfielders tended to fit an attacking role, when it came to defending, lacked awareness was an issue to be solved. 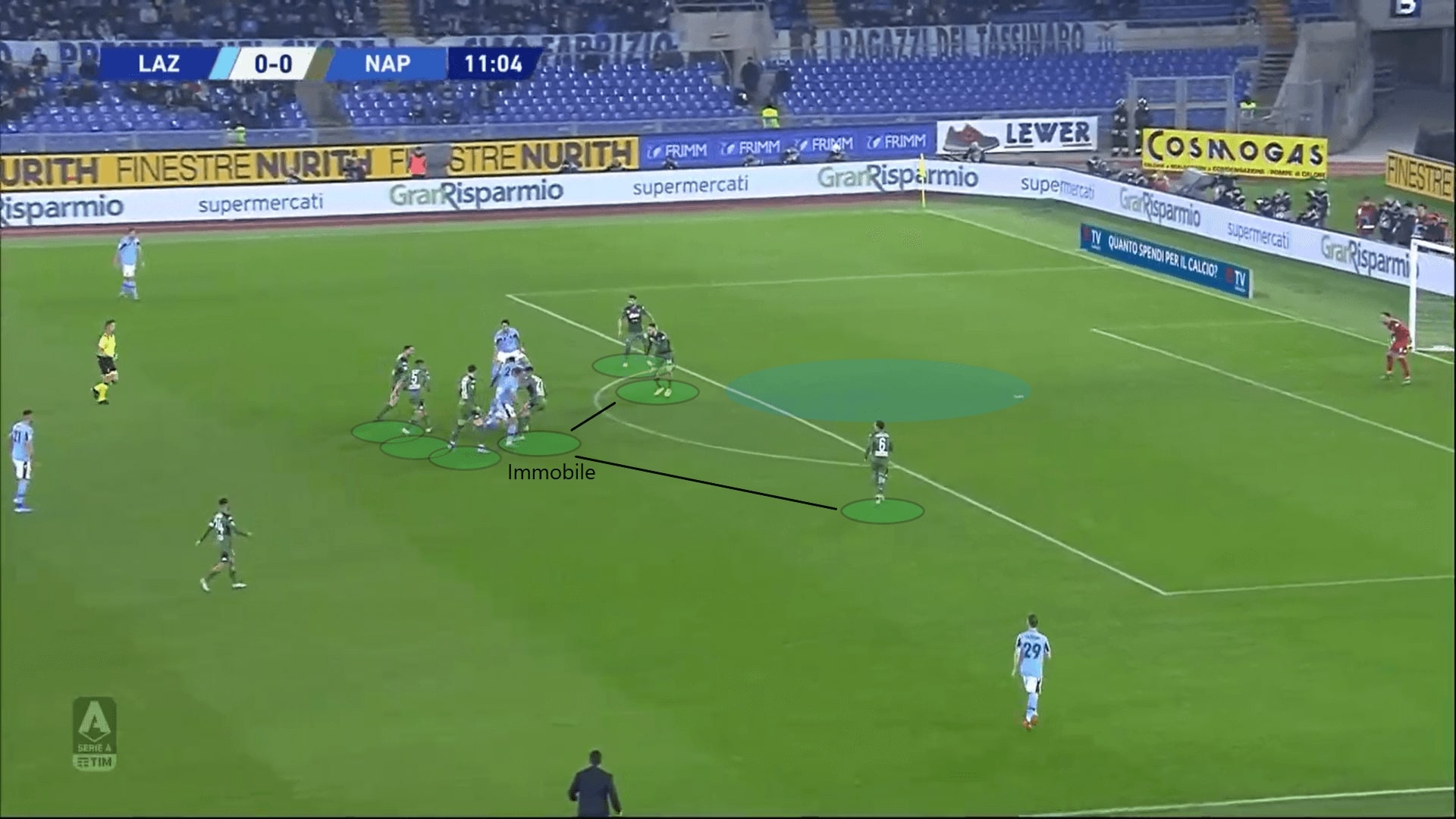 When screening through the winter arrivals of Napoli, it seemed Demme could play as a sole pivot to ease the defensive issue. He quickly started two games after coming from the bench in the first, including the big game against Juventus. He also started against Lazio in the Coppa Italia, which Napoli secured two vital victories.

Below is the heat map of Demme against Juventus. On most occasions, he stayed in his own half, usually zone 4. Sometimes, he almost moved into a slightly more advanced position on the left, supporting his teammates. 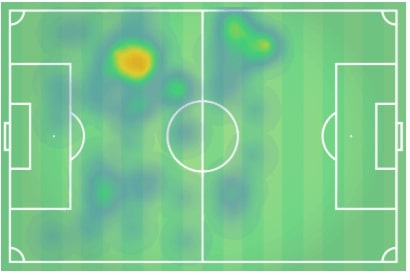 As a defensive midfielder, Demme showed his anticipation to opposition’s pass, far better than the rest of his teammates. This helped Napoli to press better, as Demme was aware of covering the shadows or shutting the passing lanes.

There was an example from the cup game against Lazio. When Zieliński stepped out to press Felipe, Demme recognized Joaquín Correa was behind him; spaces between the lines were huge as well, so the recovery of the German was vital. In this situation, he successfully intercepted the ball. 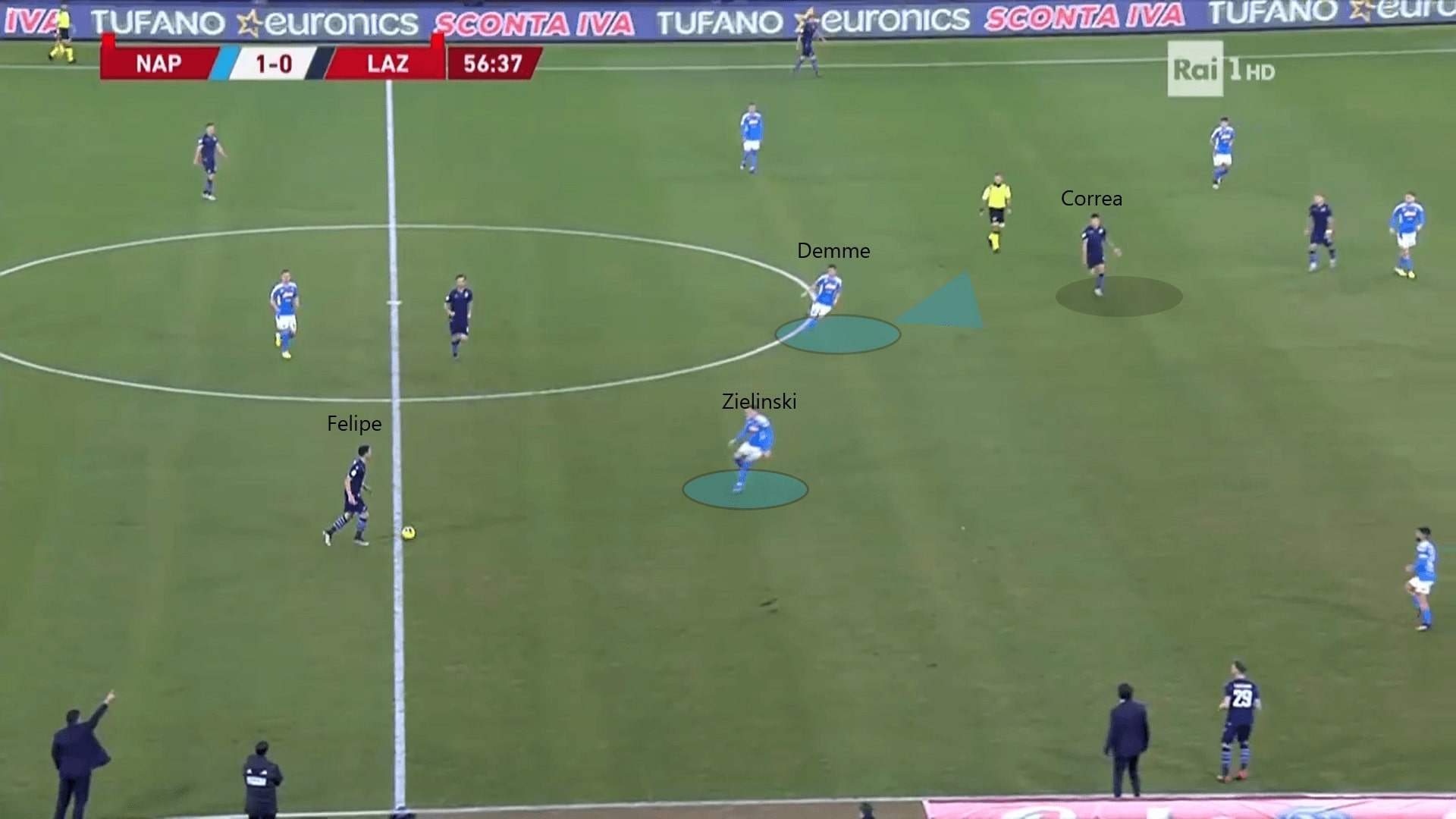 As we saw from Demme’s performance in his RB Leipzig career, the 28-year-old German was an aggressive player off the ball. He had the energy to press, and sufficient defensive awareness to cover the spaces. Although his passing ability or attacking talent was not as good as Ruiz, but the build-up of Napoli could be solved by dropping the attacking midfielders to receive the ball. Furthermore, they had a strong left combination between Rui and Insigne to progress the ball out wide. It was not a huge concern at all.

So far, the results showed Gattuso’s men were not doing good enough. After 21 Serie A games, they sit 10th of the table, with 12 points away from gaining the Champions League ticket. With the reinforcement at the midfield, also the arrival of Lobotka, who did not play much recently, Gattuso had some rooms to adjusts is tactics. It was also intriguing to observe how he was going to rotate the use of Zieliński, Ruiz and Allan as well.