Mustapha Bundu has been in sensational form for Aarhus GF in the Danish Superligaen this season. The Freetown born attacker has contributed eight goals and 10 assists in his 22 appearances, while also being involved in 48% of Aarhus goals this season. This is certainly an improvement on his four goals and eight assists across 36 games in all competitions last season. The Sierra Leonean has become somewhat of a sensation in Denmark and has thus been attracting the interest of clubs outside of the country.

Sierra Leonean Bundu is a product of former Manchester City striker Craig Bellamy’s now-defunct football academy, who began his career at FC Hereford, before joining Danish side Aarhus for around £45K. According to Transfermarkt, Bundu’s value is just under £1.5 million, which makes him an option for many clubs looking for cheaper options, especially with considering the uncertainty surrounding the summer transfer window. Bundu is looking to emulate fellow countryman Kei Kamara, who was the first Sierra Leonean to feature in the EPL with Norwich and is currently MLS forward for Colorado Rapids.

This tactical analysis, in the form of a scout report, will analyse the strengths of the Sierra Leonean’s game, as well as areas that need improvement. The 23-year-old can play on either flank or as a centre forward depending on the tactics Aarhus deploy, and at 1.88m tall he has the size to go with his speed and technical ability. Bundu’s agent believes he is ready for the next step, and this analysis will highlight why that is true.

Bundu is clearly a factor in counter-attacks as either the finisher of the provider. With six assists in the league this season, Bundu has exceeded his 5.05 xA. He currently sits tied fourth in assists so far this season. He also sits eighth overall in touches in the penalty area, averaging 4.10 per 90. 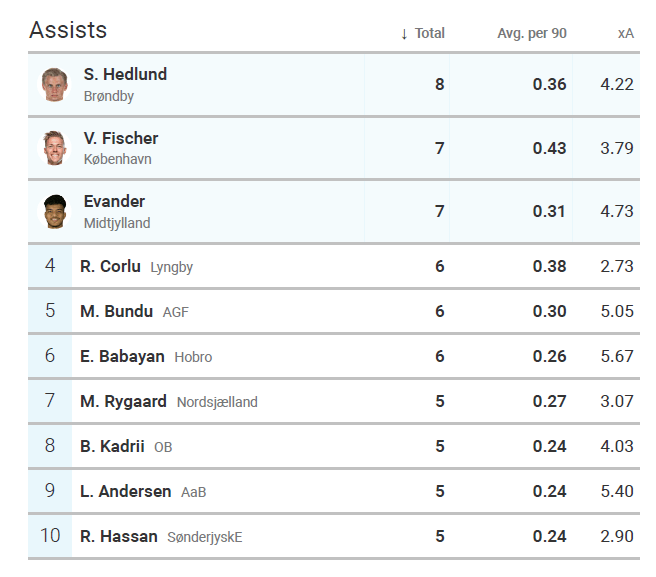 For example, in this match against Aalborg BK, we see Bundu in his own half when the ball is played into the furthest forward Aarhus player.  We see that there are two defenders between Bundu and the defence. The left-back in this situation is in a good position, as he is already facing his own goal, meaning he can now easily track the run of the Sierra Leonean. 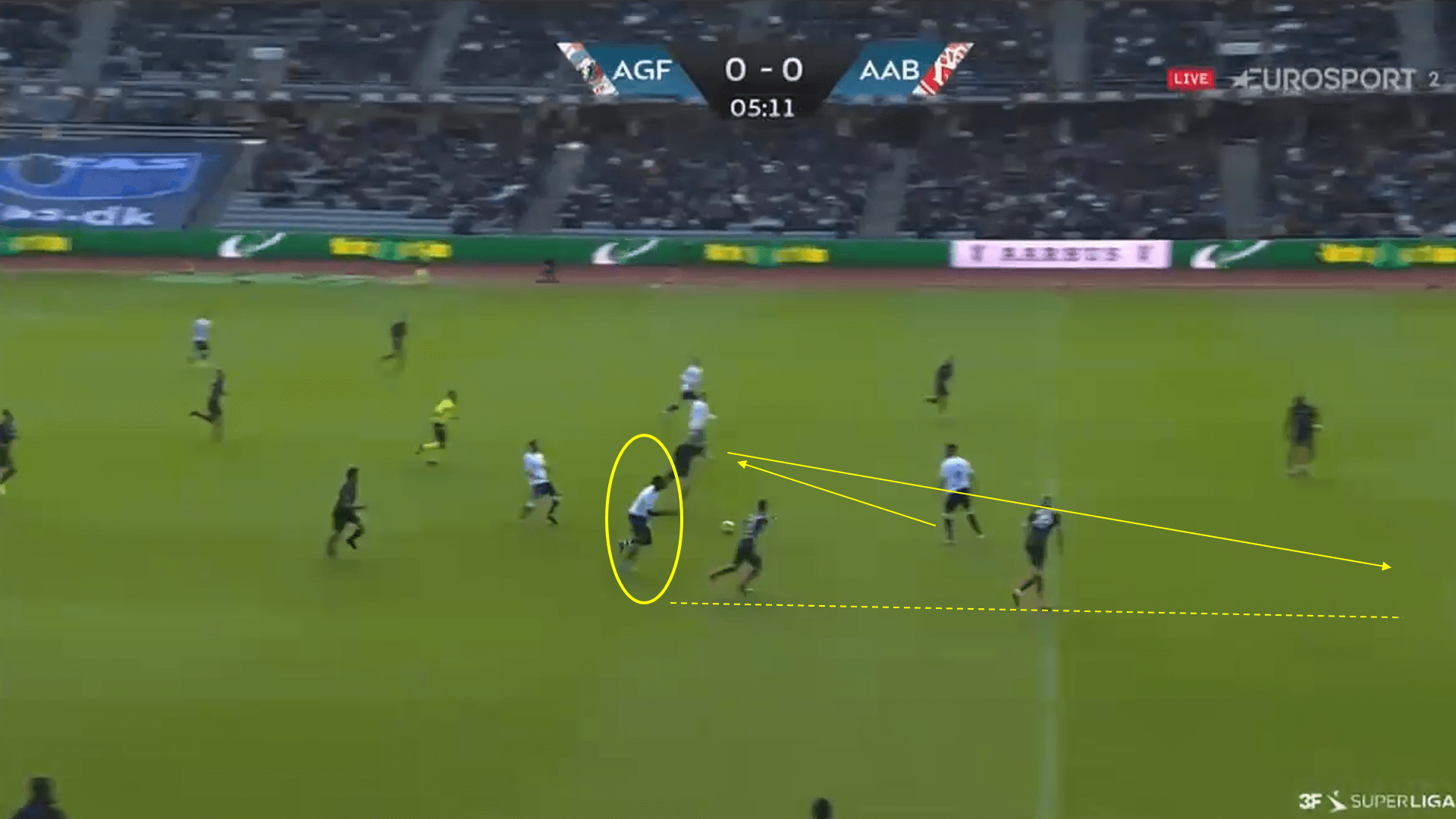 However, by the time the striker has laid the ball off to the central midfielder, we see that Bundu has raced past both defenders to latch onto the through ball. This pace of Bundu is key here in the counter-attack because it allows Aarhus to make the most out of counter-attacks and improves their ability to stretch the play. For Bundu in this situation, he has two options, either go for the shot or attempt to find his oncoming teammate. 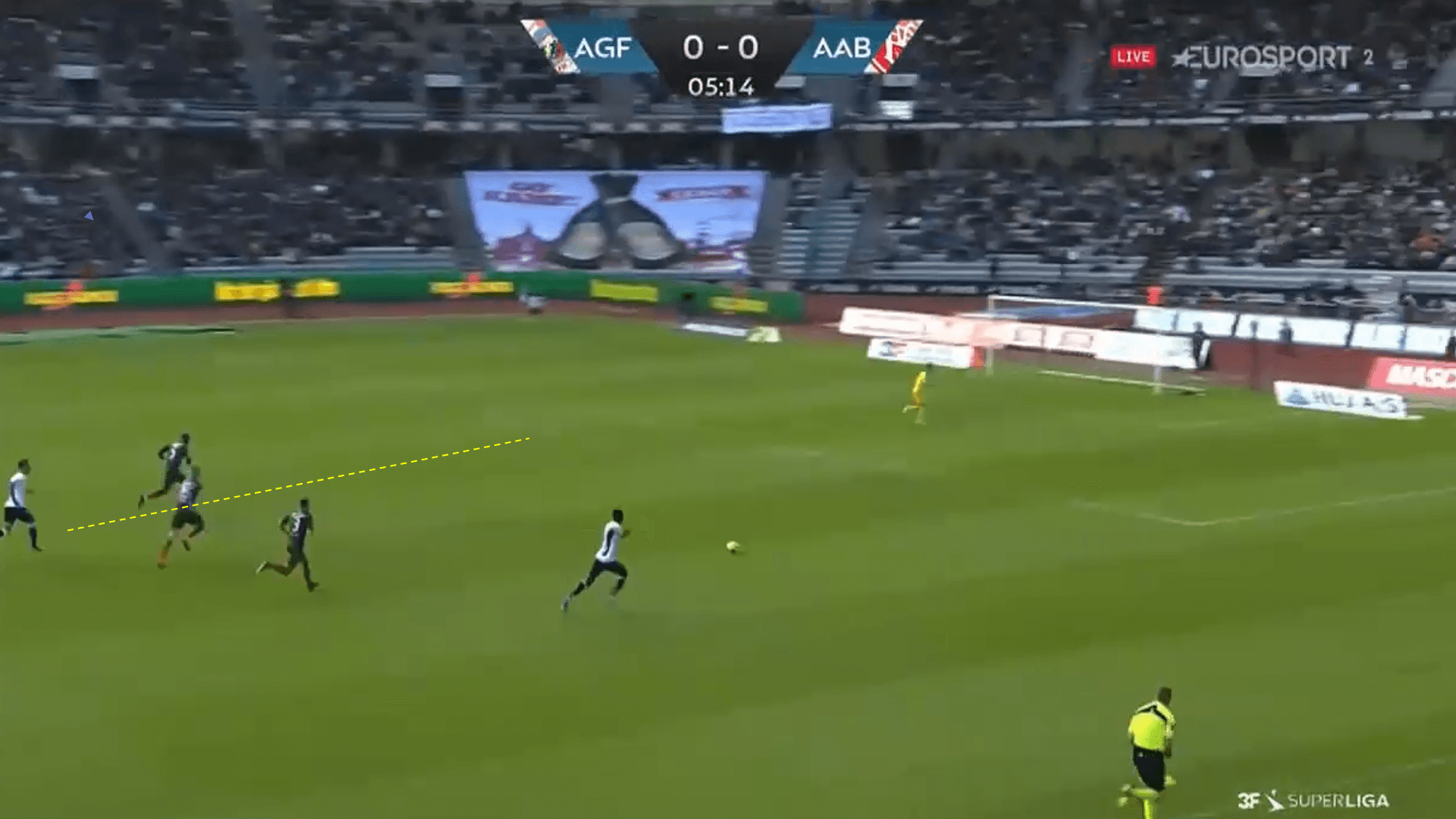 When Bundu receives the ball, he is slightly wider than he would like. Even so, in this situation, we can clearly see the technical ability of forward, as well as his excellent decision making in practice. For instance, when isolated with the full-back, he knows that he has the technical skill and speed to go past him. Combined with his strong right and left foot, he is more than happy to cut inside. With the defender still moving towards him, Bundu uses his momentum to wrong-foot him by cutting inside and finishing with his left foot. 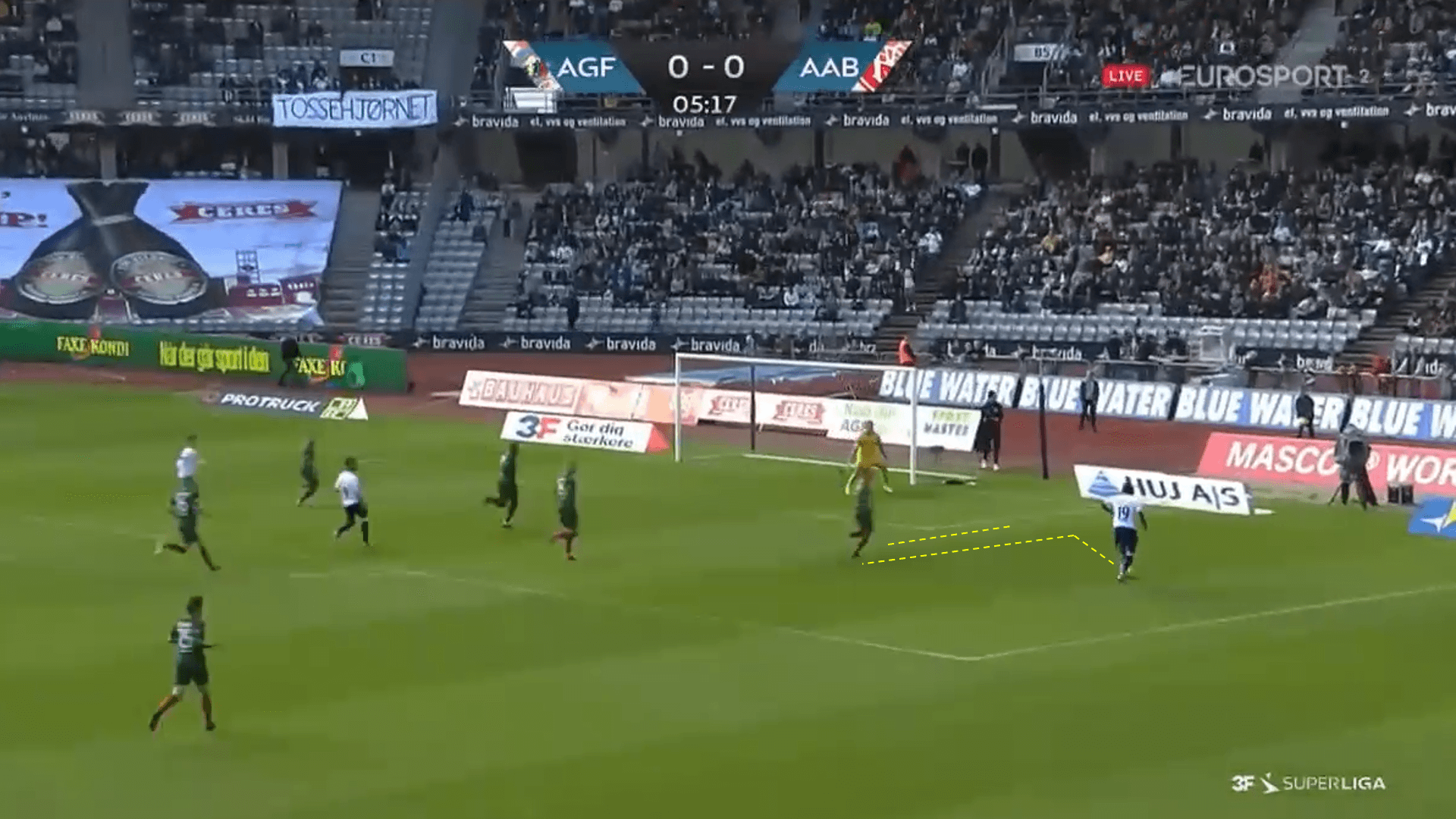 Dribbling stats for this season also highlight the ability Bundu has in this area, which helps on the counter-attack as he can progress the ball up the field and take defenders out of the game. He averages 5.29 per 90 with a success of 63.55%. This success percentage is better than the top 10 dribblers in the Danish league. Which is even more impressive when considering that his side have less possession and fewer opportunities to dribble with the ball than most of the other sides in the league. 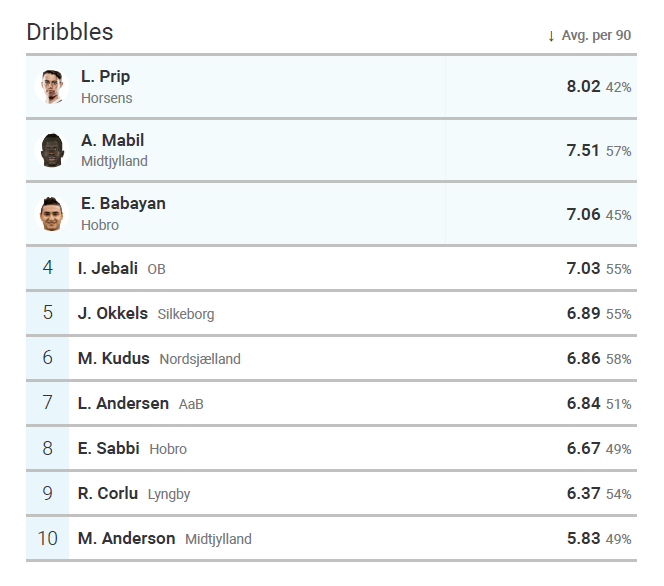 Bundu’s ability to run with the ball, finish with either foot and make correct decisions make him an important player for Aarhus on the counter, as well as an intriguing prospect for larger clubs outside of Denmark.

In terms of xG, Bundu is averaging around 0.32 per match, which is an impressive number, especially when we consider that Bundu is predominantly used as a right-winger. Bundu averages just over 2 shots per 90 with an accuracy rating of around 47%. His xG per shot is the joint best with fellow Aarhus player Jakob Ankersen at 0.17. All this data points towards the fact that Bundu is taking the right shot at the correct time and not just looking to shoot at any given opportunity. 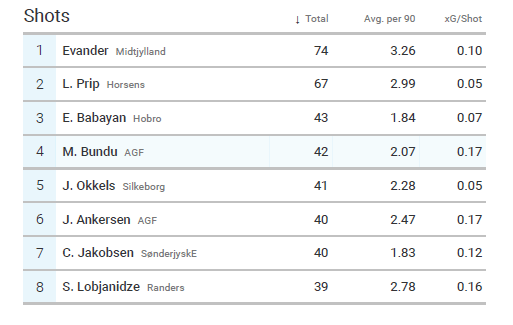 Additionally, his high assist numbers suggest that he reads situations very well, due to his anticipation to know when to shoot or when to try and find a teammate. For example, in the below game against Bronby IF, when the ball is played into Bundu’s path, initially it looks like he has plenty of space to shoot as well as an additional option to pass back to the initial passer if the defender was to come across. 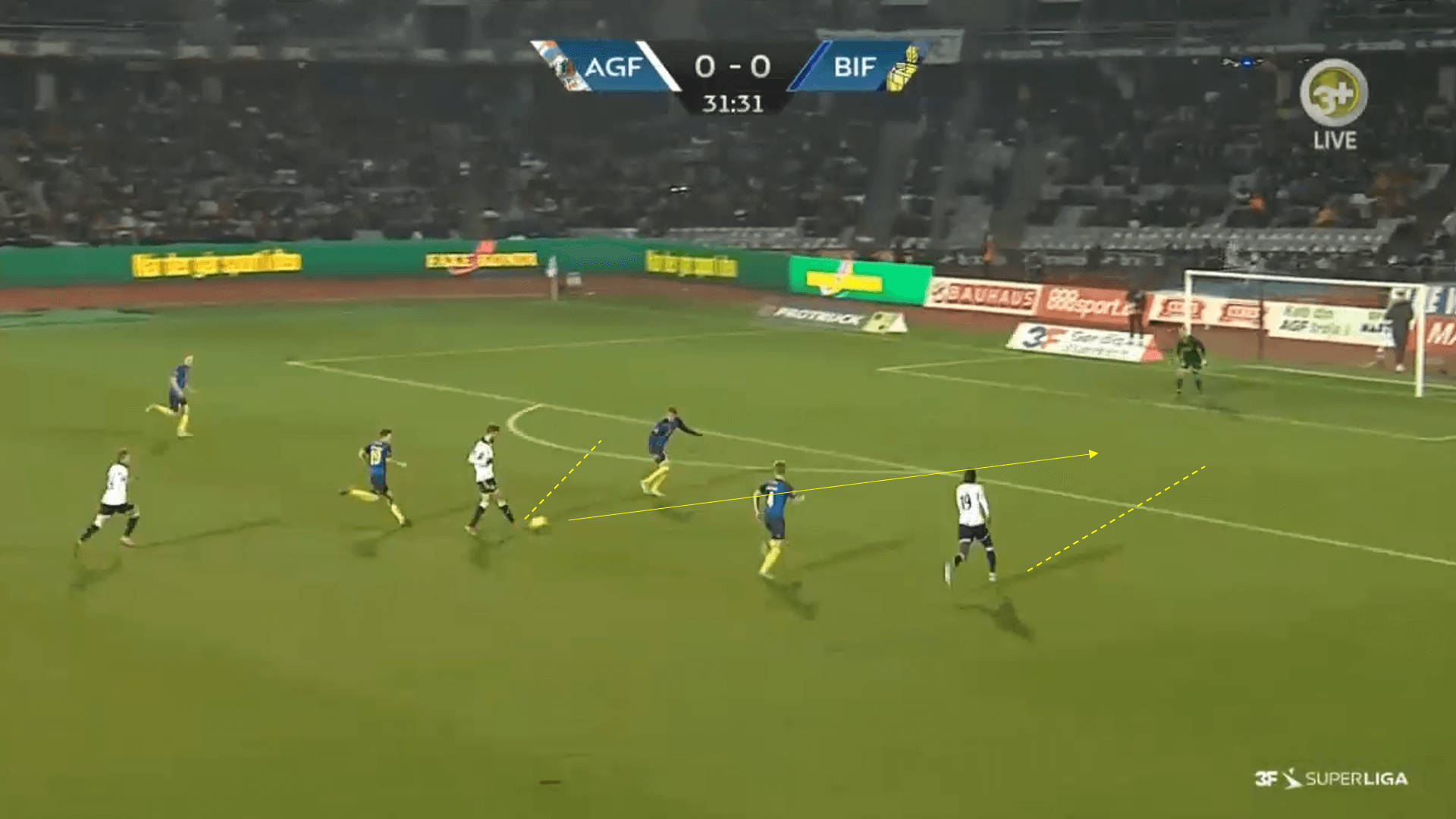 However, the pass is overhit and takes Bundu slightly wider than he would like. Again Bundu has a few options, he could strike it across the keeper or even attempt to find the teammate who has progressed into the box. In this image we also see that the keeper is already moving slightly to his right (our left) when Bundu gets the ball. Clearly Bundu notices this and instead of taking a conventional shot across the keeper, or looking for the assist, he hits a powerful shot inside the keeper’s near post. 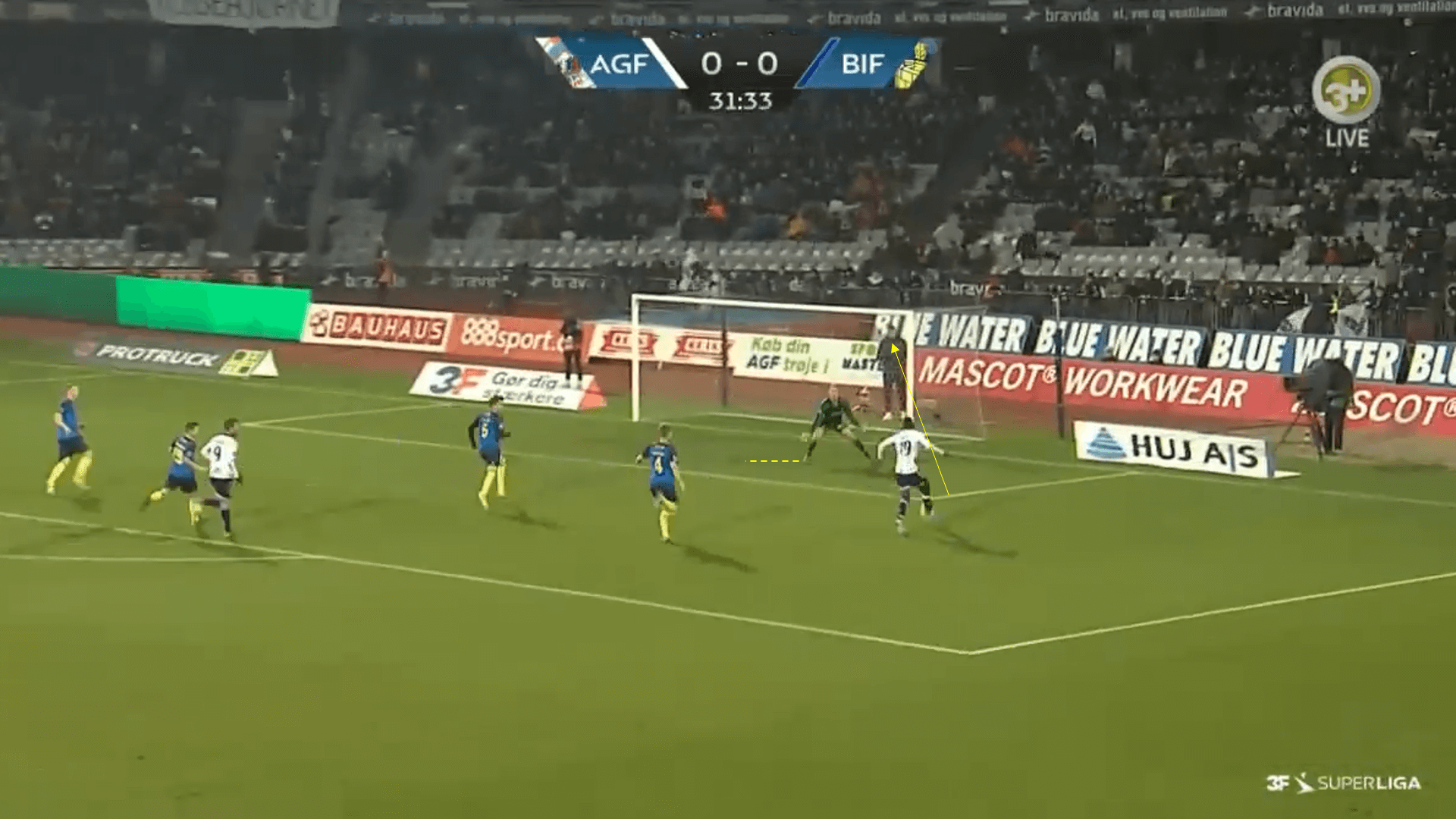 This passage of play, as with the previous counter-attack, highlights Bundu’s ability to read a situation. He picks up the clues in the goalkeeper’s movement and counters them, by striking the ball in the opposite direction that the keeper is anticipating. Both clips have also shown how Bundu is an accomplished striker of the ball with either foot, another factor that makes him an effective finisher.

Crossing: an area to improve

Bundu is a willing crosser of the ball. In comparison to other wingers in the Danish league, he is averaging 4.59 crosser per 90, putting him fifth overall. In comparison to the rest of the league, Bundu is seventh. Yet, he has the worst accuracy rating out of the top eight at only 22.58% by far, with the next lowest being fellow Aarhus player Kasper Lunding with 37.5%. While we have acknowledged that Bundu is exceeding his xA of 5.05, this could improve dramatically if he could increase the accuracy of his crossing. 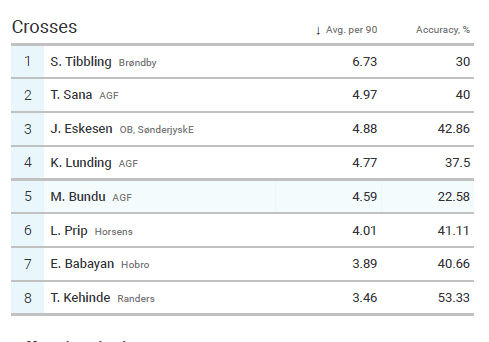 It is interesting to note that many of Bundu’s assists this season have come from crosses. By analysing the ability of Bundu as a crosser a pattern begins to emerge whereby the decision-making time for the winger has an impact on the execution of his crosses.

For example, against FC Midtjylland, in the below clip Bundu picked up the ball in his own half before racing past two defenders. He now has a split decision to make, either take the next defender on or surprise him with a quick cross. Making a quick decision seems to be a strength of Bundu, as instead of doing what the defender expects him to do by taking him on, he instead produces a quick cross to the edge of the area which is swept home by an onrushing teammate. 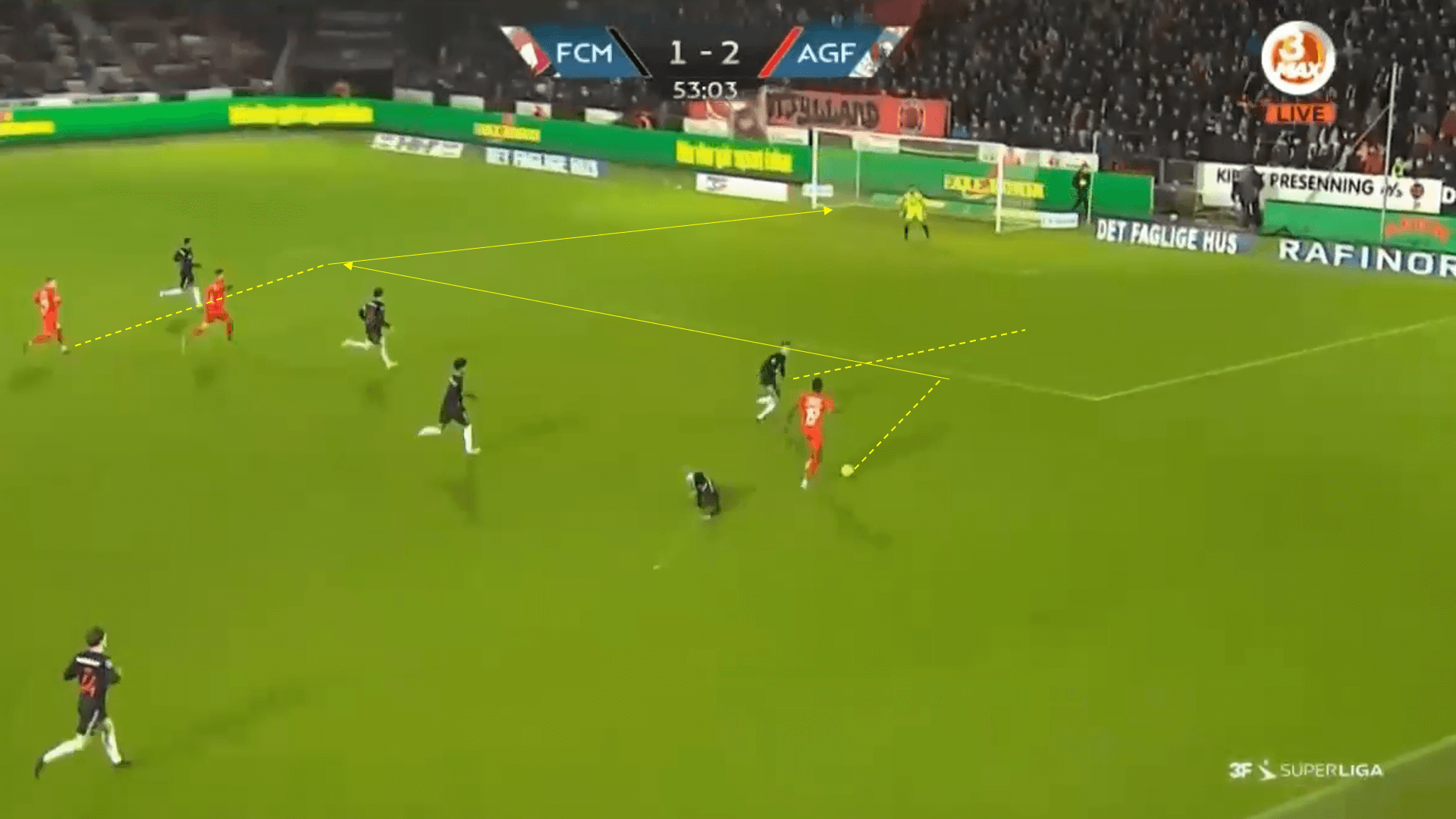 In another game, this time against AC Horsens, Bundu attempted seven crosses but only two of these were accurate. Below, we see Bundu receive the ball in a stationary position which is unlike the picture above as he is not receiving the ball at speed. This change gives the winger more time to weigh up his options, rather than being forced into making a quick decision. 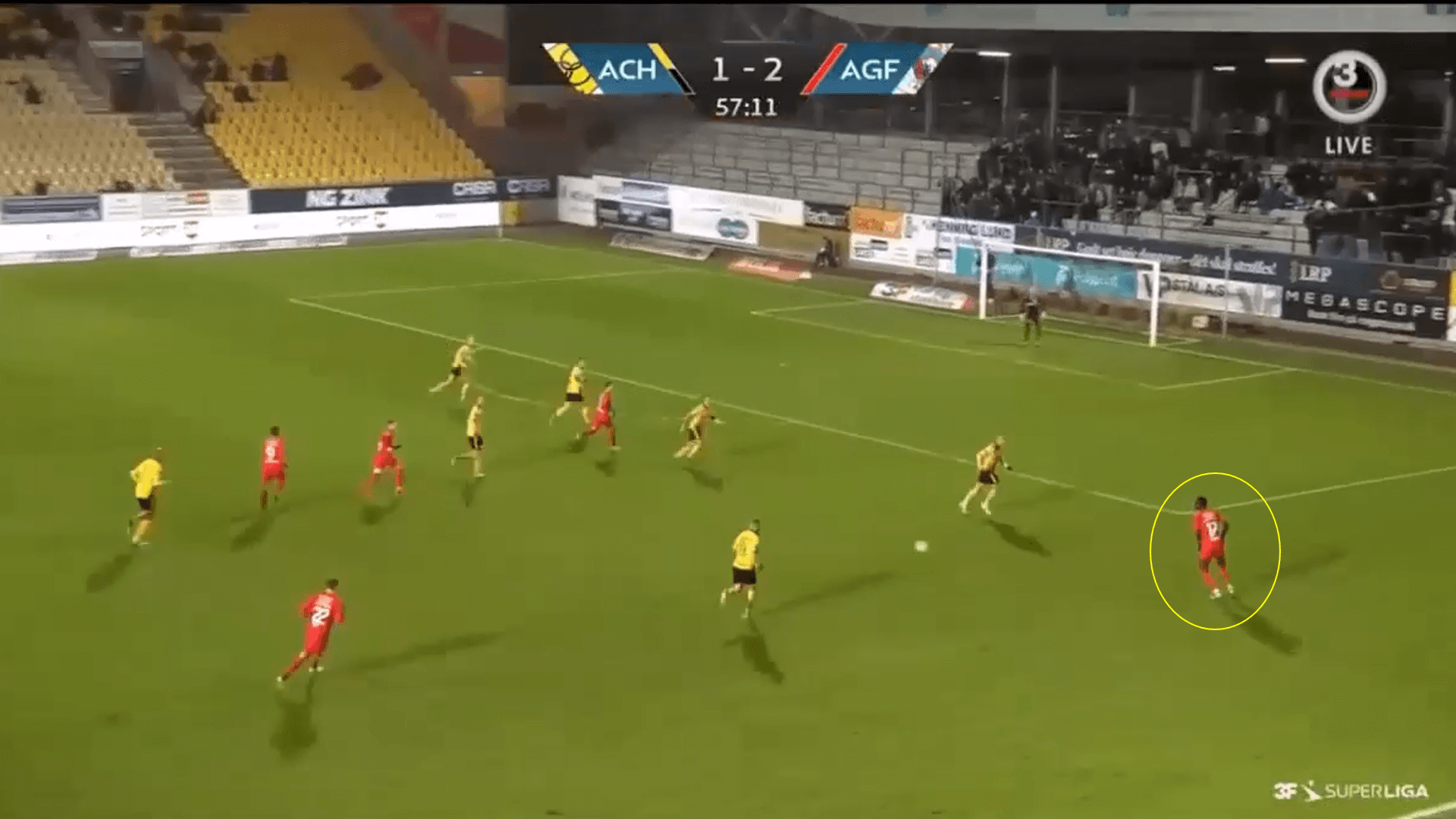 We see below that Bundu has barely moved from where he received the ball. There is space in between his fellow Aarhus player and the penalty area where Bundu could put the cross into the box, however on this occasion, he overhits the ball and it goes harmlessly out of play. Comparing this cross to the earlier cross, this was probably an easier one to execute as he had more time to look up and decide where to put it. 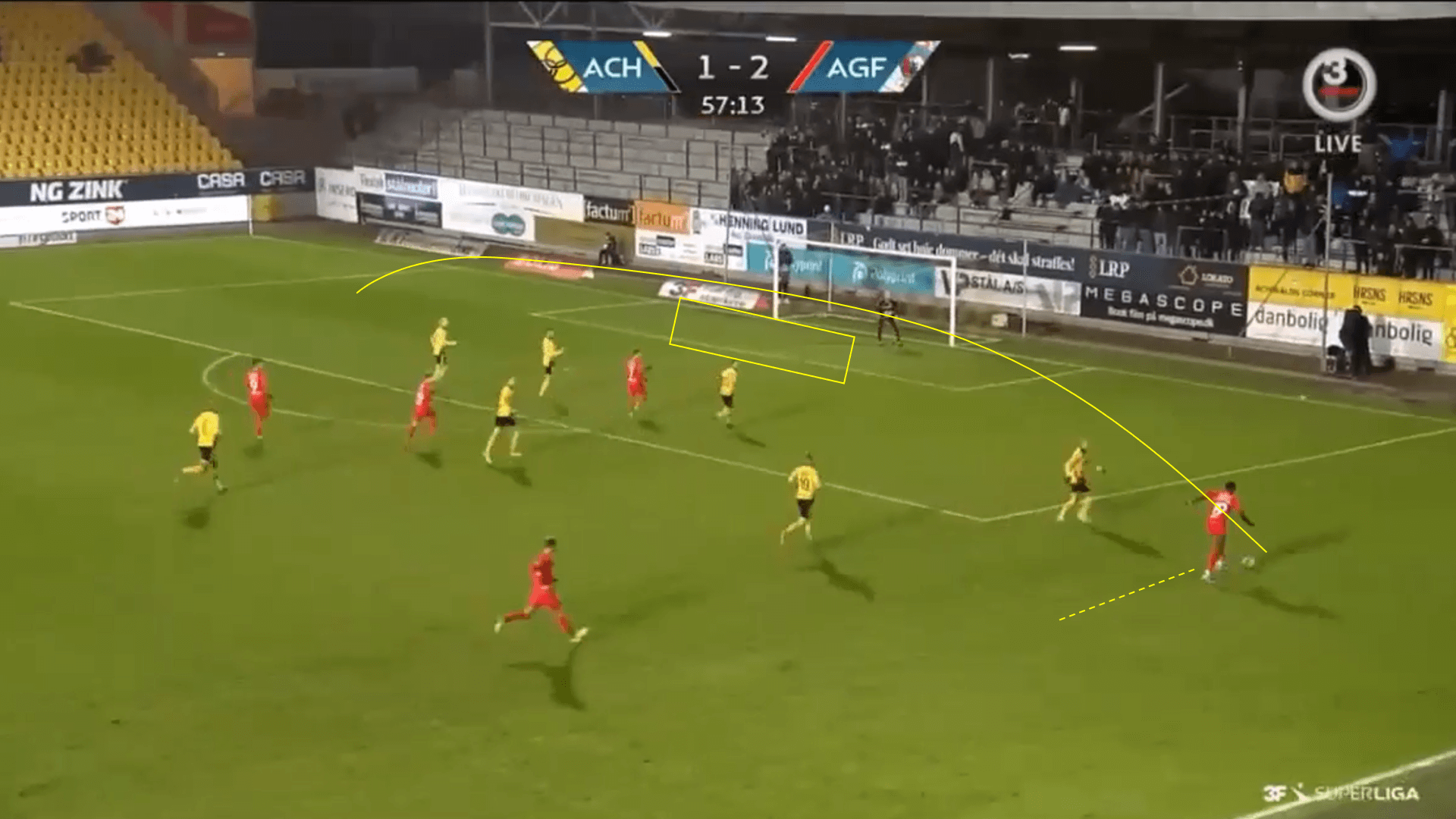 With him running at full speed, he had less time to make his decision and find his man. Yet despite this, the cross was more accurate than the previous one. This is a running theme of Bundu’s play, if he could improve his crossing from a stationary point or even just when he is afforded more time to analyse the situation, he could improve both his accuracy percentage and his assist numbers significantly.

Bundu’s outstanding season for Aarhus is almost over. Judging by how well he has performed, it would not be surprising to see him linked with larger European clubs. What may well suit Bundu would be a move to a mid-tier league, like Holland or Belgium where he could prove himself against better opposition, before then moving on to top European leagues where he can hopefully reach his true potential.